In this last of meeting places
We grope together
And avoid speech
Gathered on this beach of the tumid river. …

This is the way the world ends
Not with a bang but a whimper. 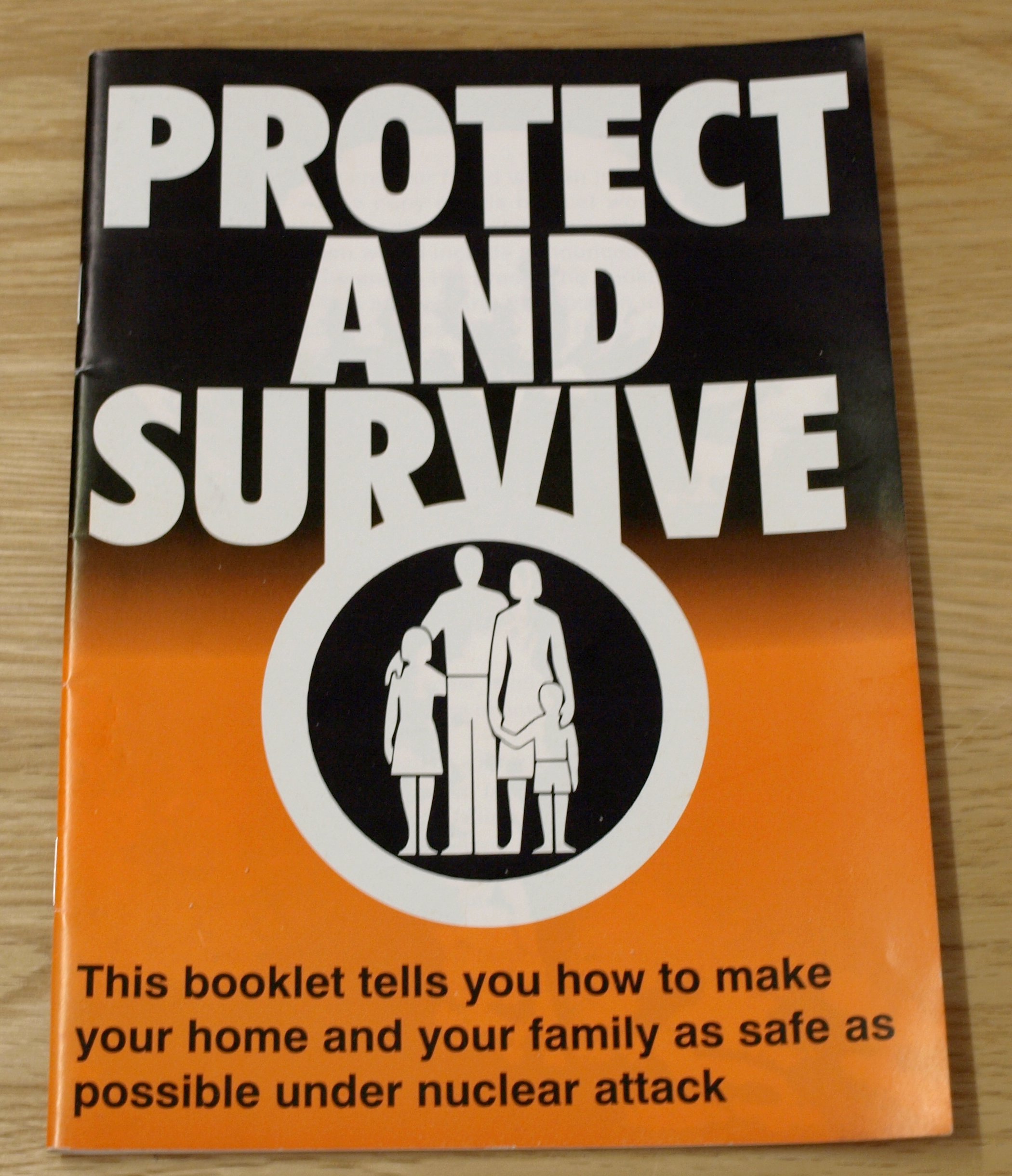 The Protect and Survive pamphlet was produced by Margaret Thatcher’s government during the Cold War in May 1980. It advised people on the safest way to stay alive after a nuclear attack. If nuclear war loomed likely, a copy of the booklet would have been distributed to every household in the UK.

Things to know. In the event of the Cold War turning decidedly hot in the event of nuclear armageddon, the cupboard under the stairs is your safe space. Curtains should be drawn to offer defence against flying glass from shattered windows. And know that “you cannot remove radiation from water by boiling it”; “if you are in the open and cannot get home…lie flat (in a ditch) and cover the exposed skin of the head and hands”; and wait. All that for just 50 pence. 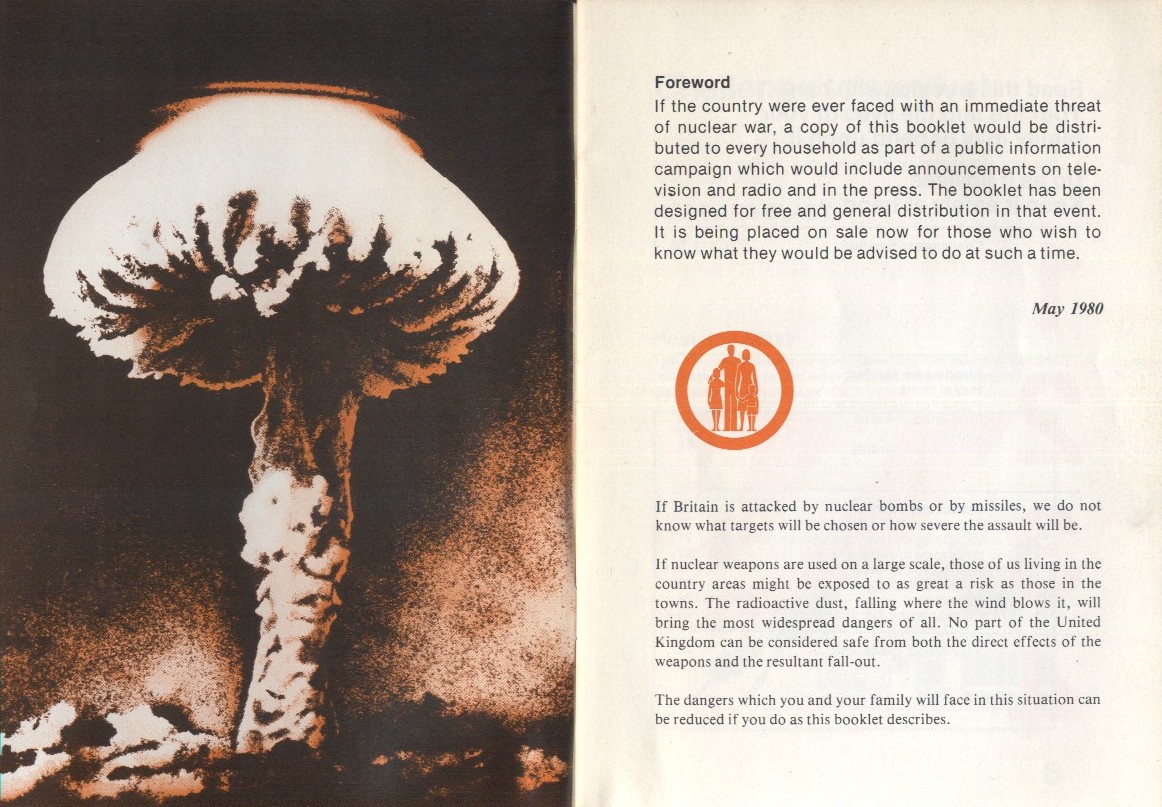 If the country were ever faced with an immediate threat of nuclear war, a copy of this booklet would be distributed to every household as part of a public information campaign which would include announcements on television and radio and in the press. The booklet has been designed for free and general distribution in that event. It is being placed on sale now for those who wish to know what they would be advised to do at such a time.

If Britain is attacked by nuclear bombs or by missiles, we do not know what targets will be chosen or how severe the assault will be. If nuclear weapons are used on a large scale, those of us living in the country areas might be exposed to as great a risk as those in the towns. The radioactive dust, falling where the wind blows it, will bring the most widespread dangers of all. No part of the United Kingdom can be considered safe from both the direct effects of the weapons and the resultant fall-out. The dangers which you and your family will face in this situation can be reduced if you do as this booklet describes. 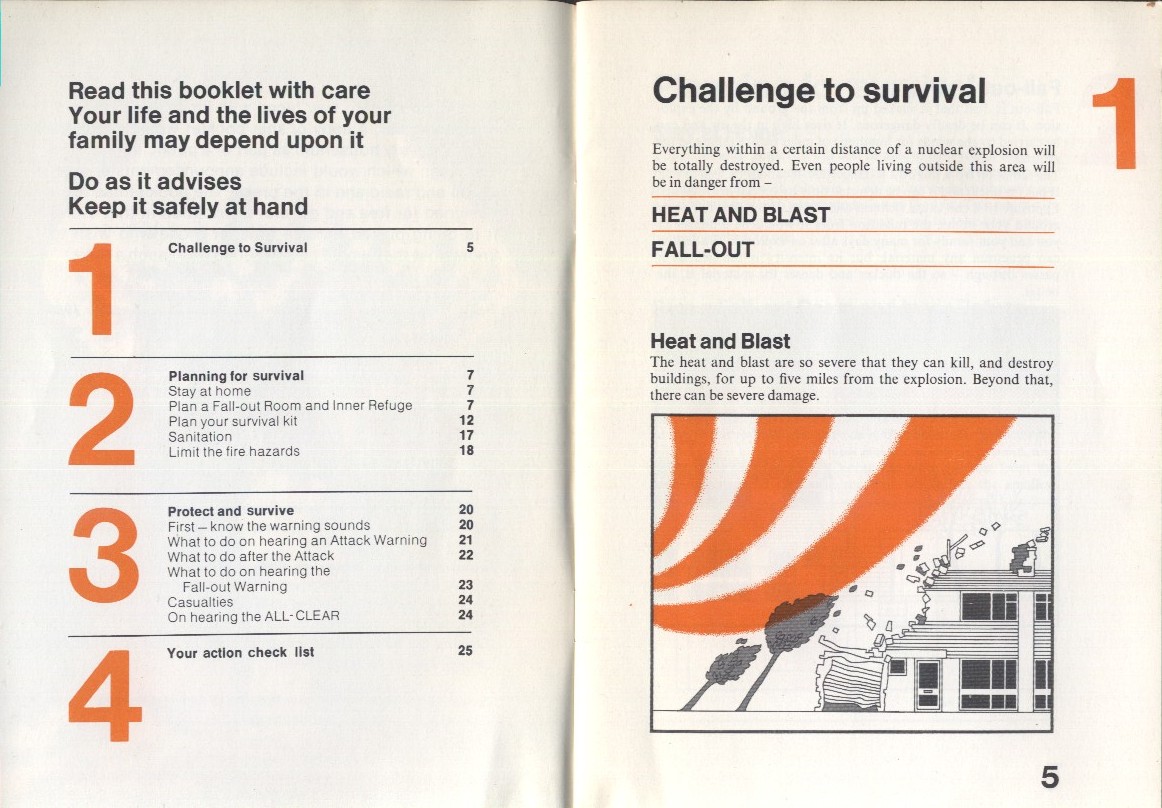 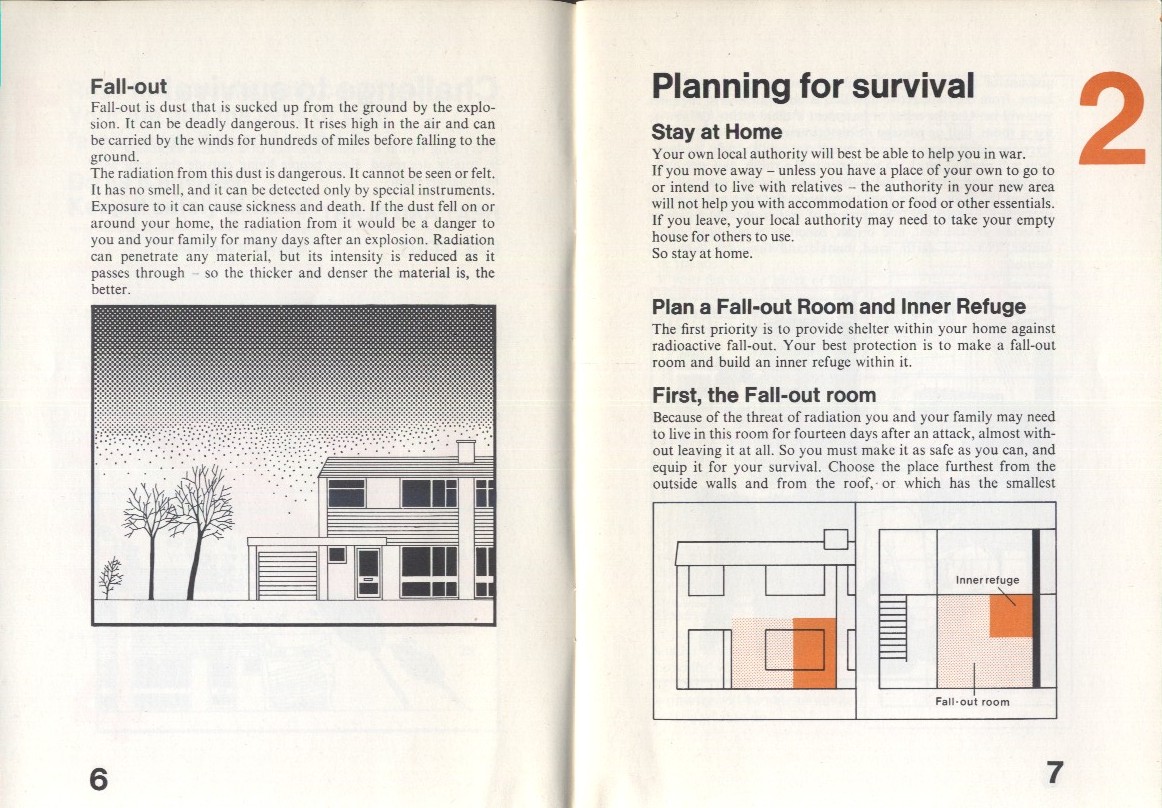 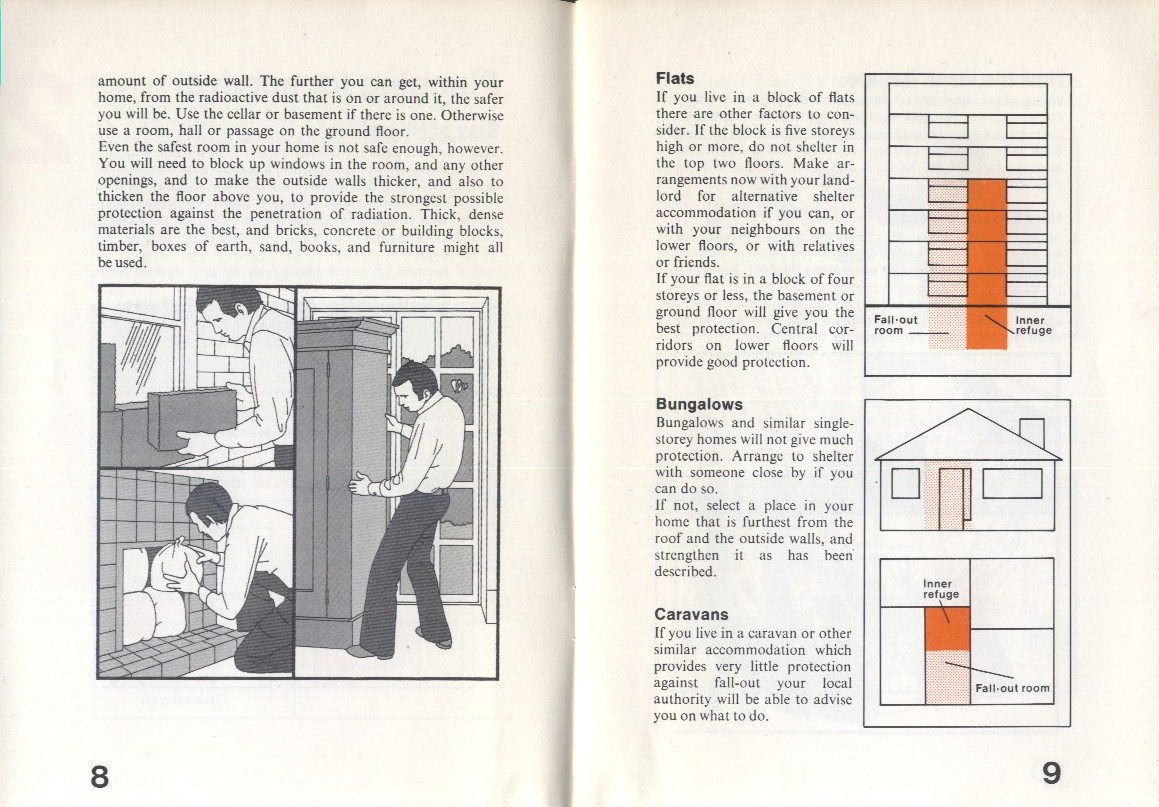 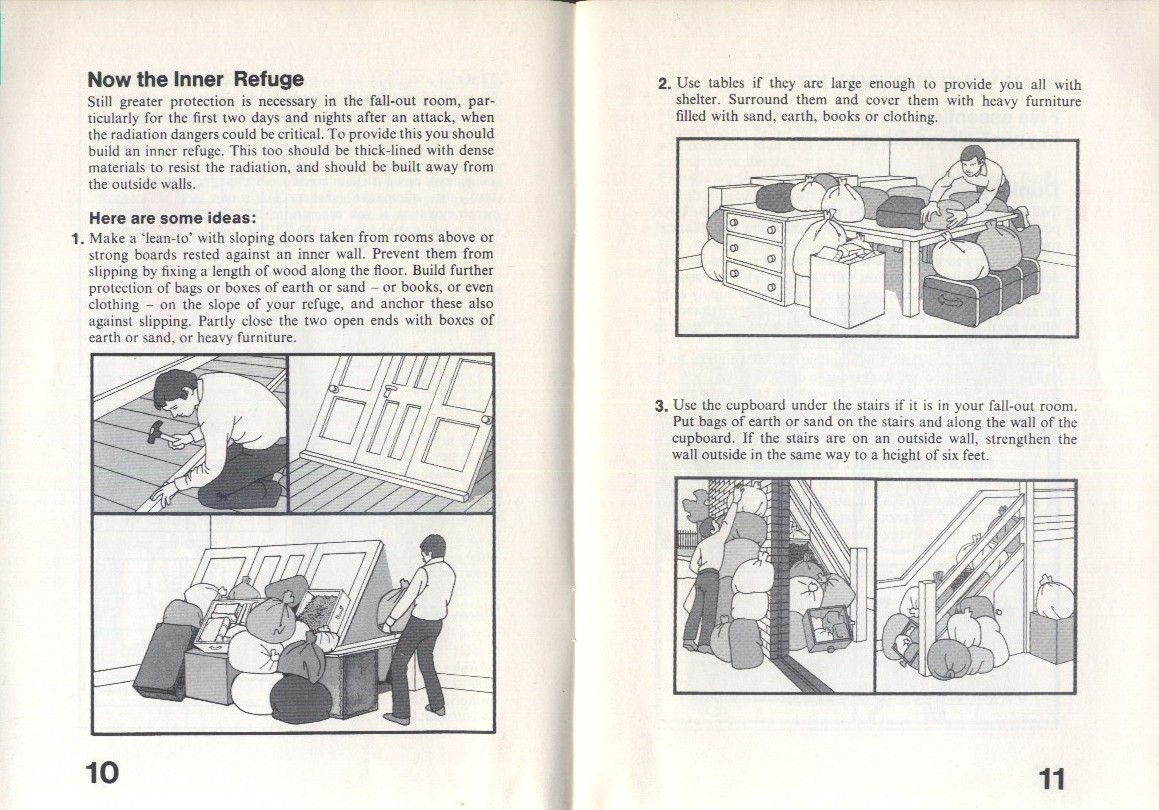 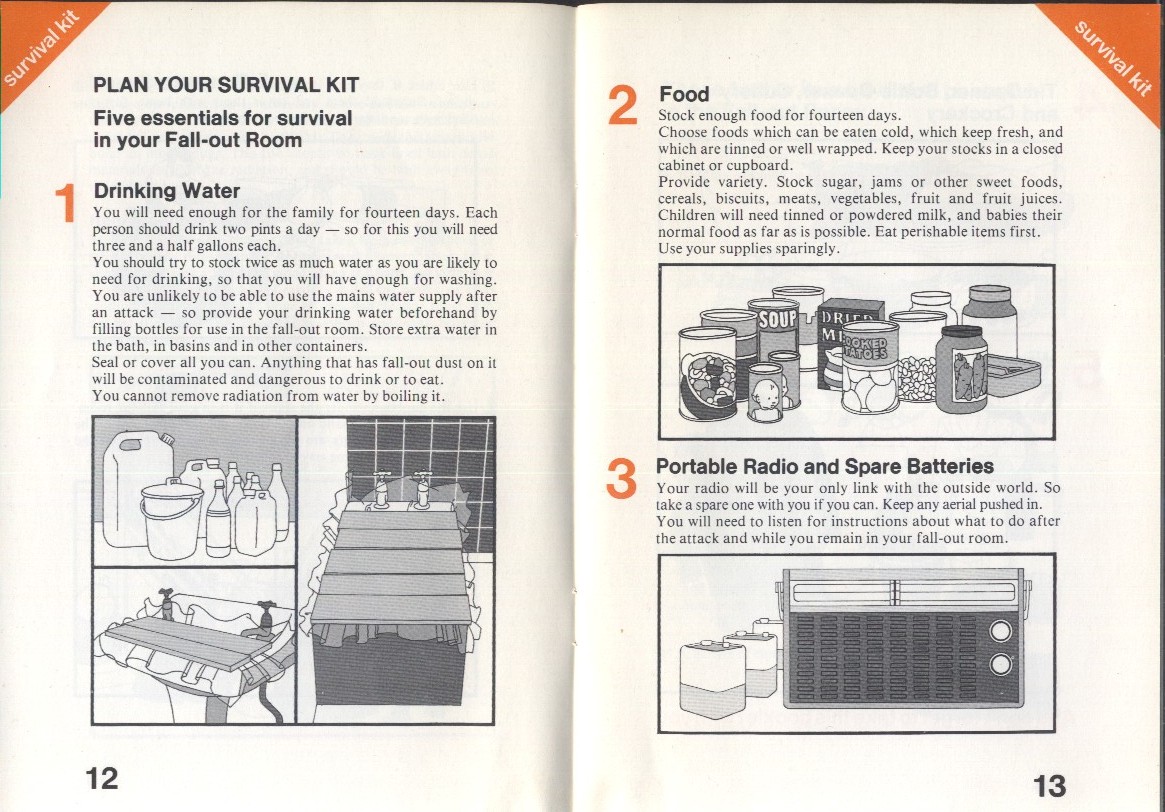 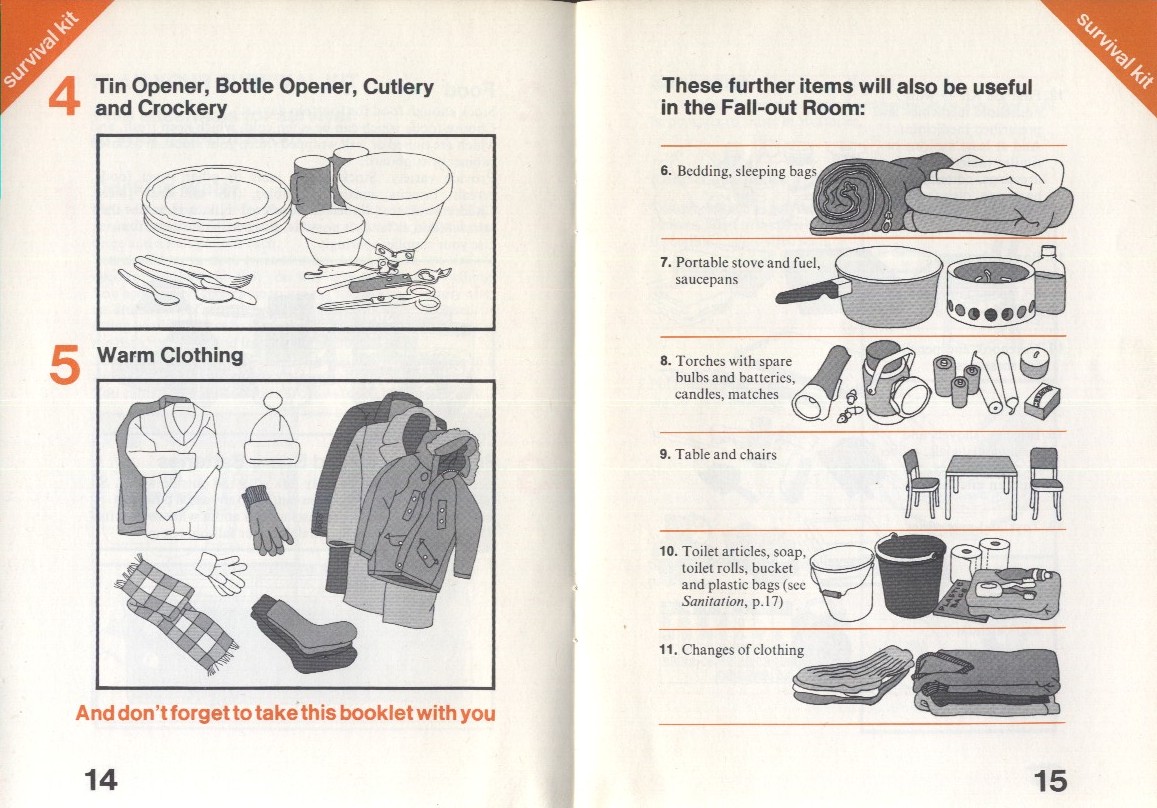 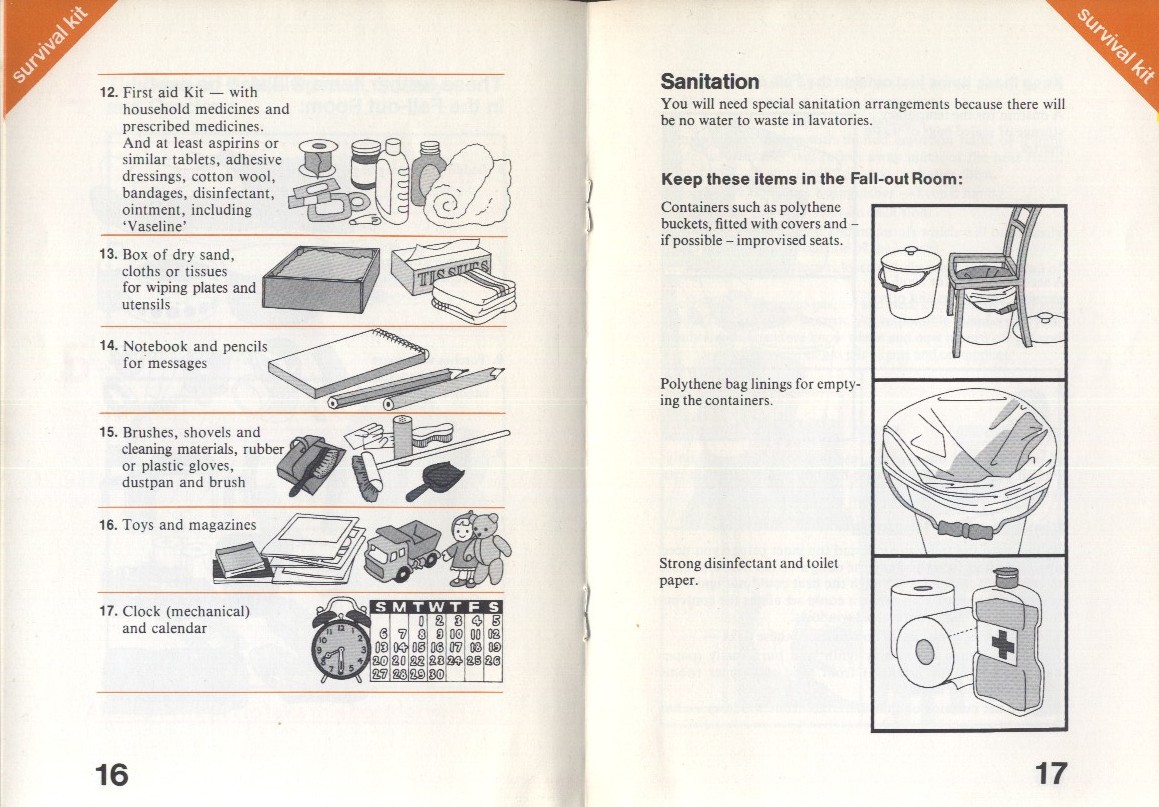 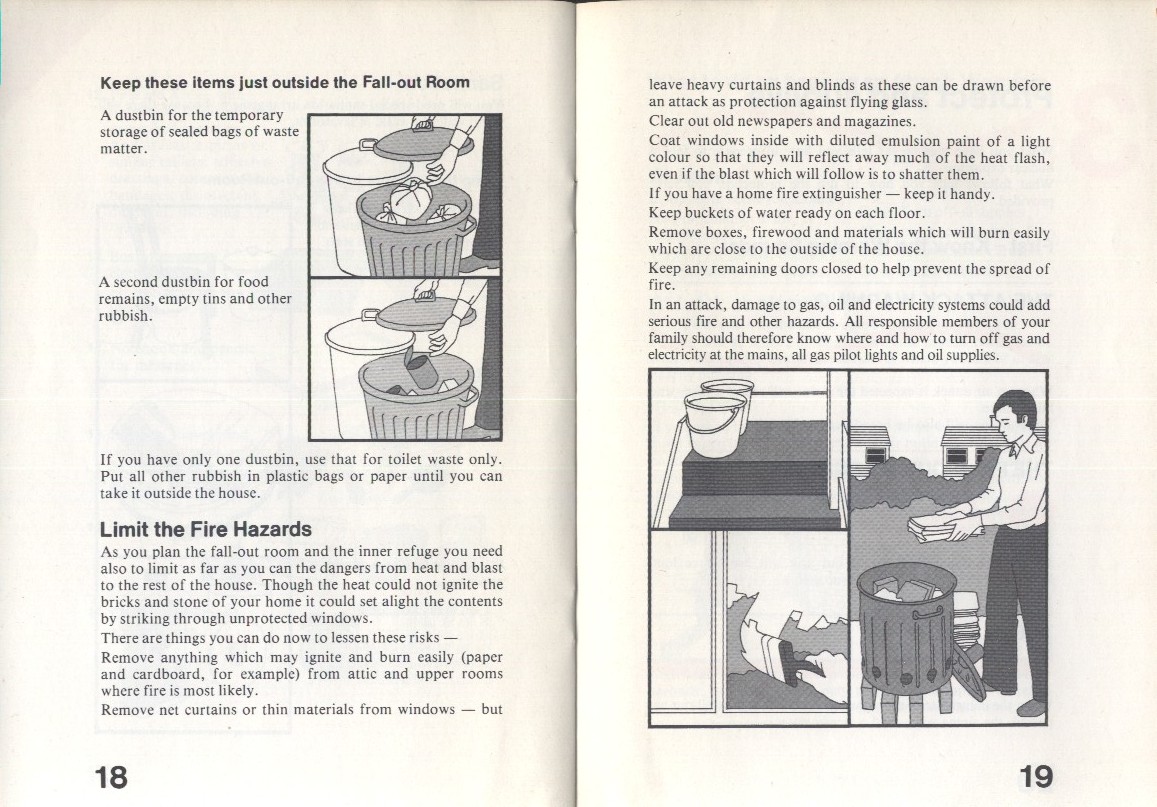 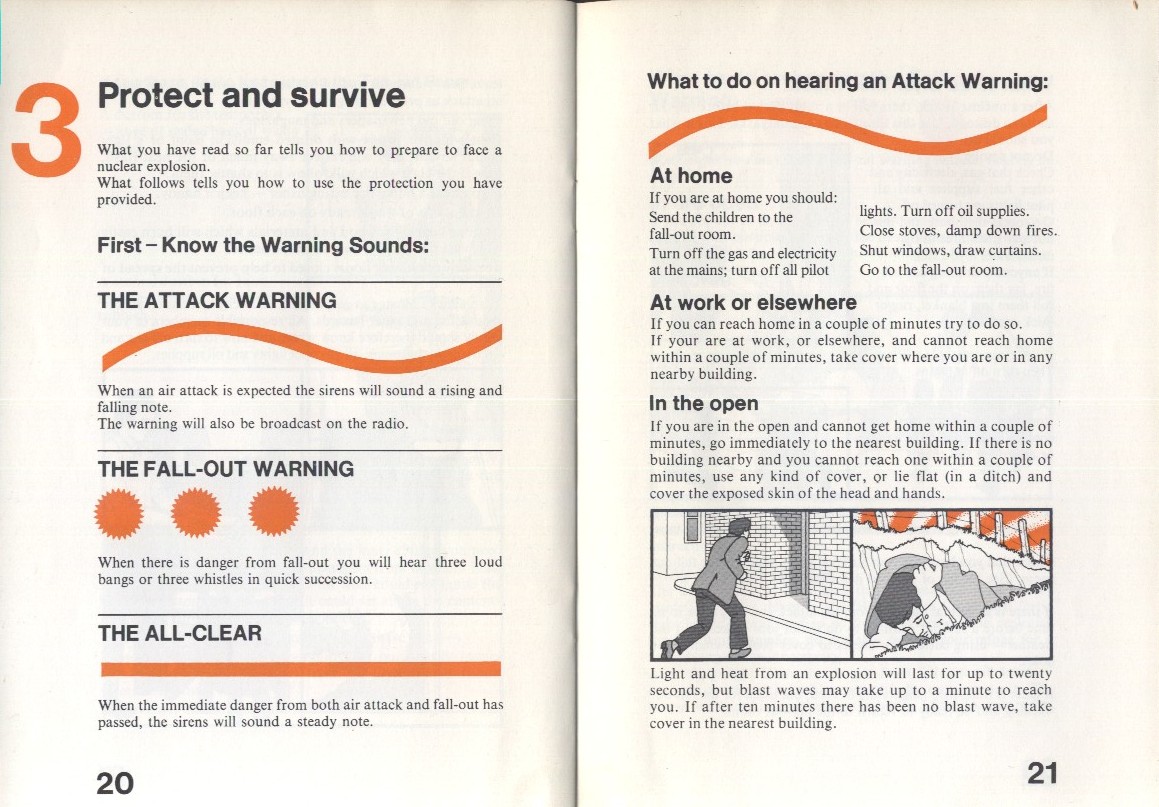 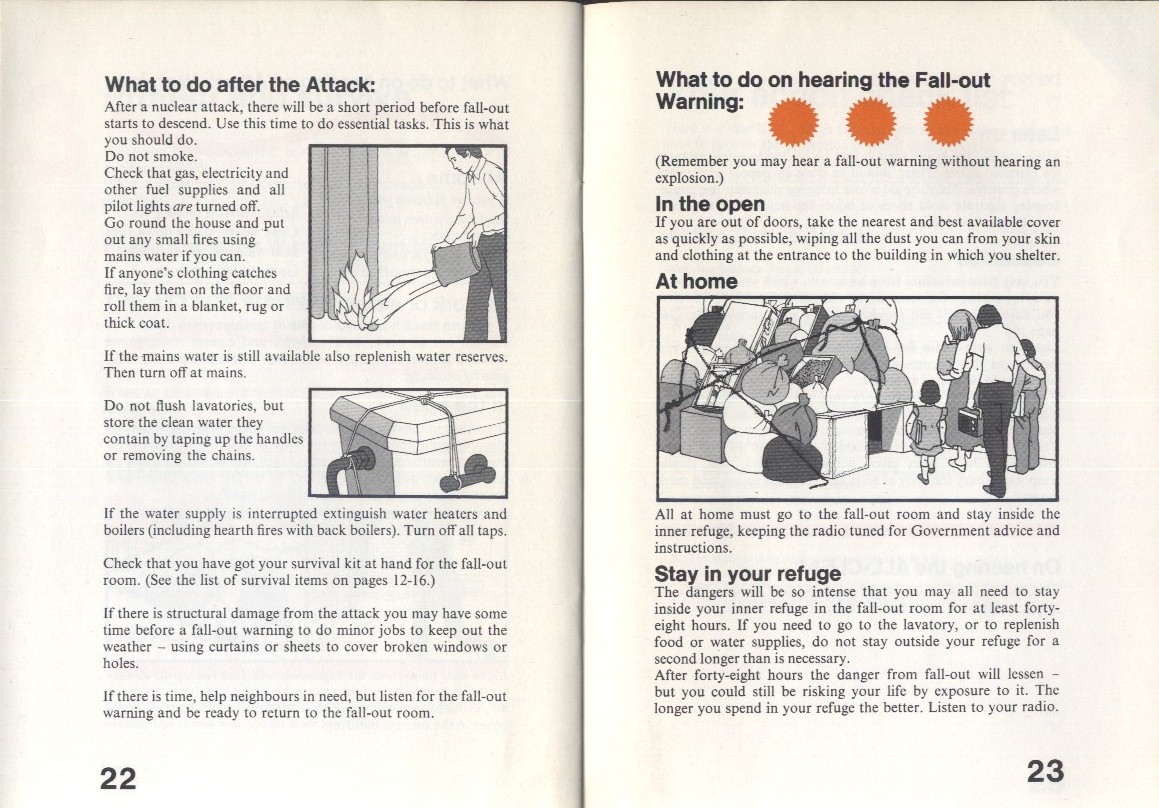 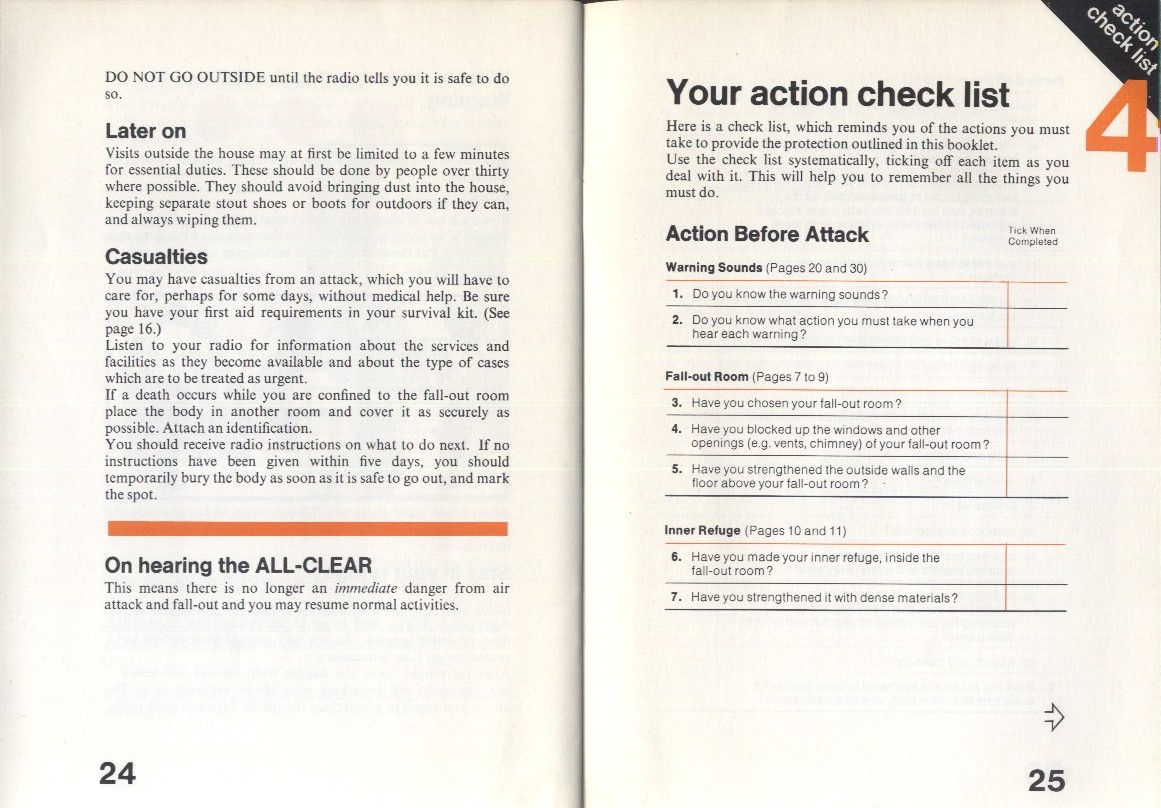 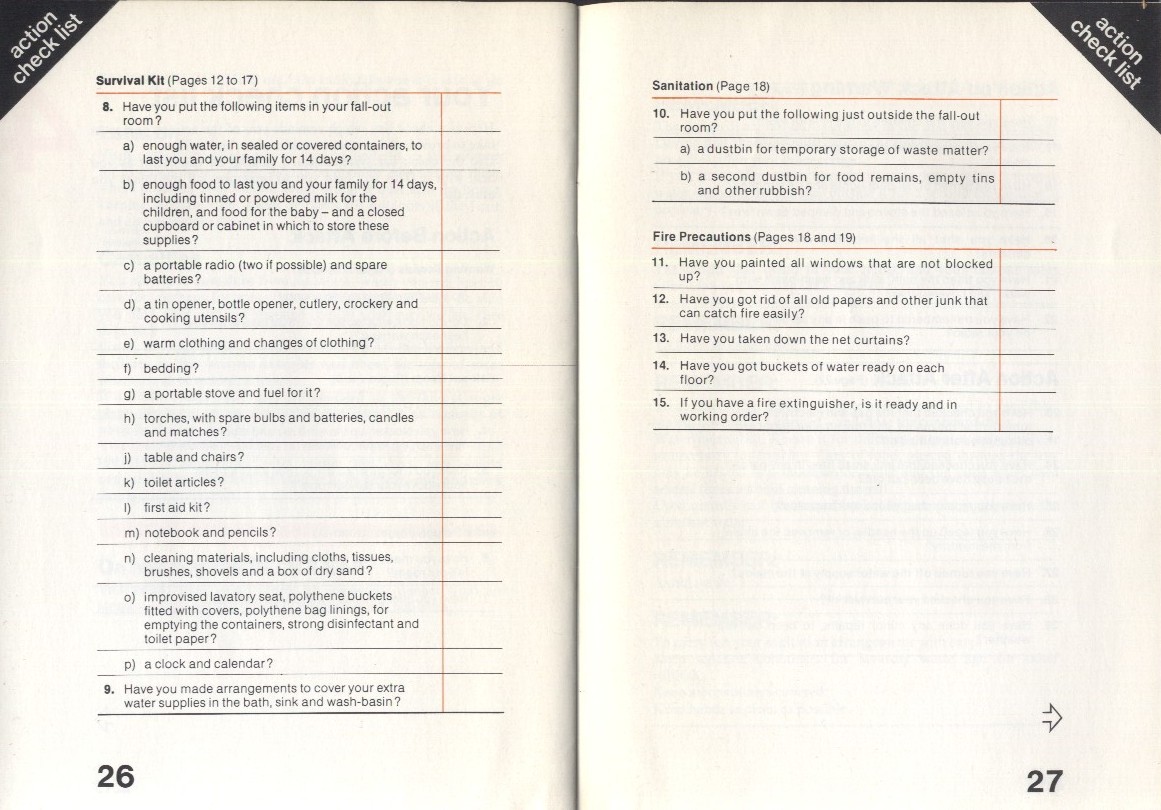 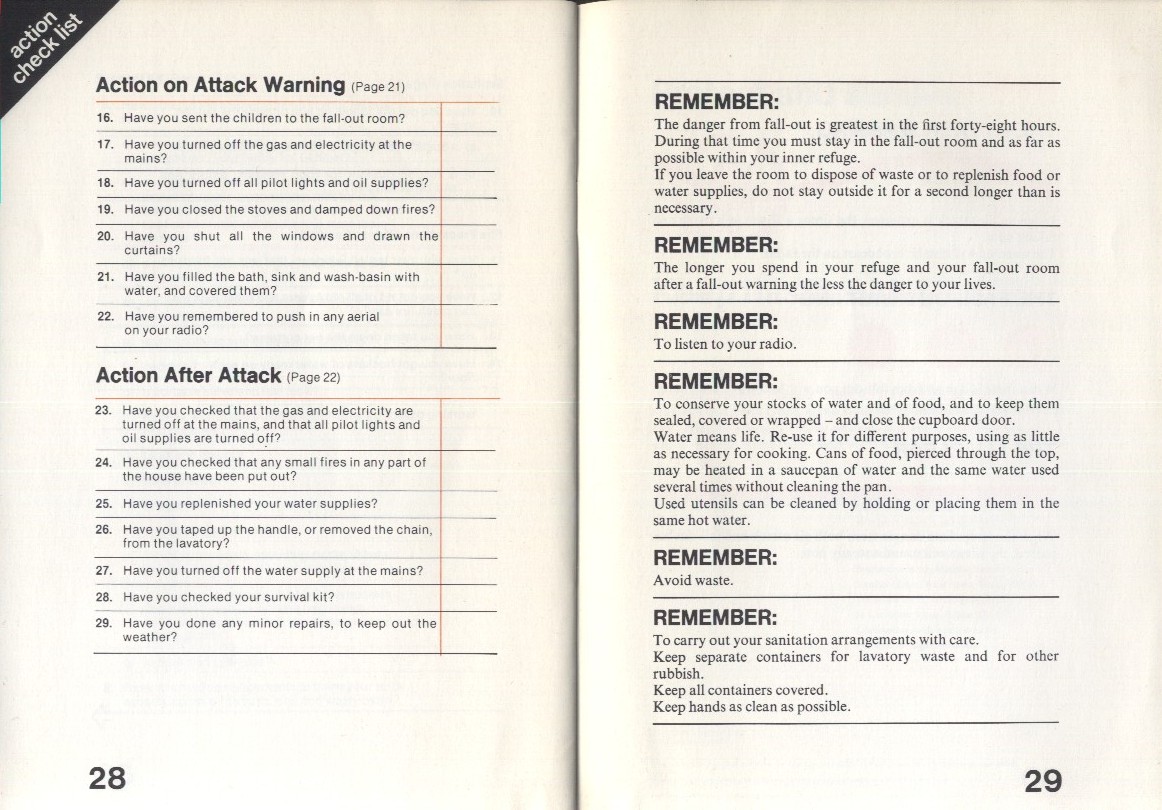 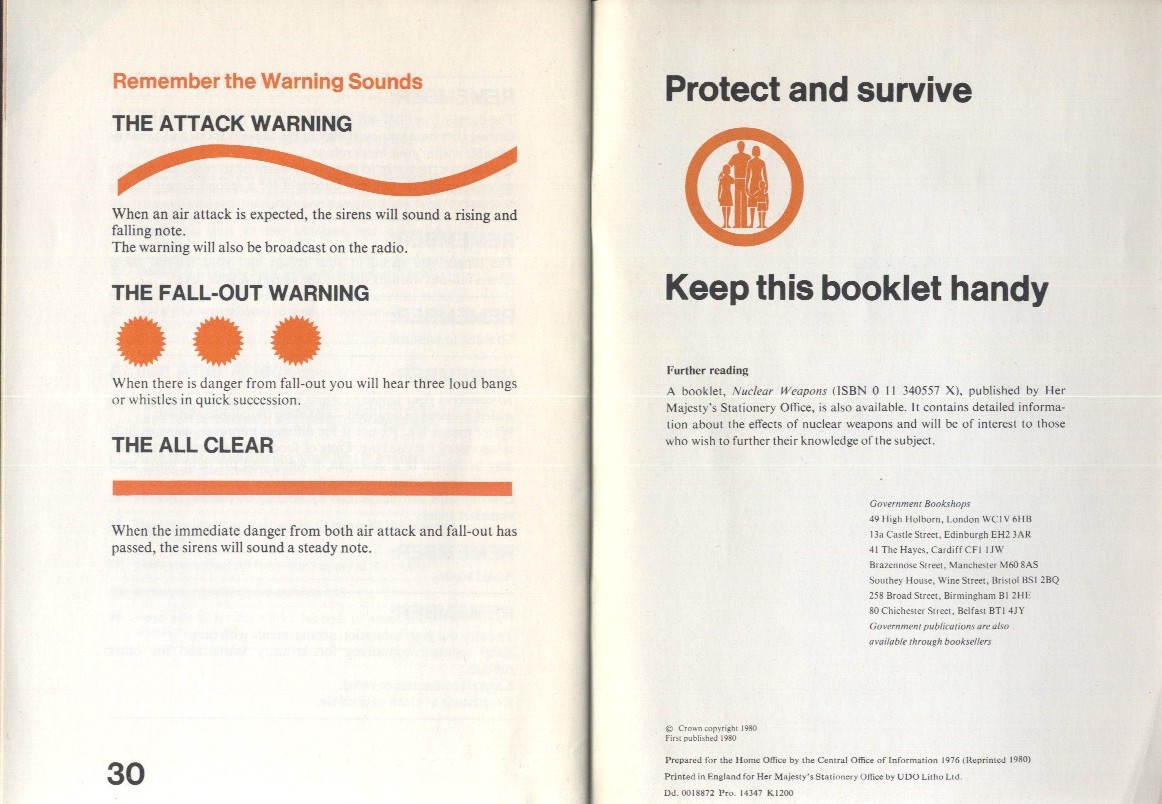 Should your pamphlet become vaporised, covered in radioactive dust or used to maintain personal hygiene standards, worry not because Richard Taylor’s 20 advisory films would be broadcast on the TV. Made in 1975 and leaked in 1980, the animations feature the reassuring tones of voiceover artist Patrick Allen. His advice would keep survivors alive. (In 1984, anyone listening to the 12-inch mix of Frankie Goes to Hollywood’s hit Two Tribes heard him state: “I am the last voice you will ever hear. Do not be alarmed.”). 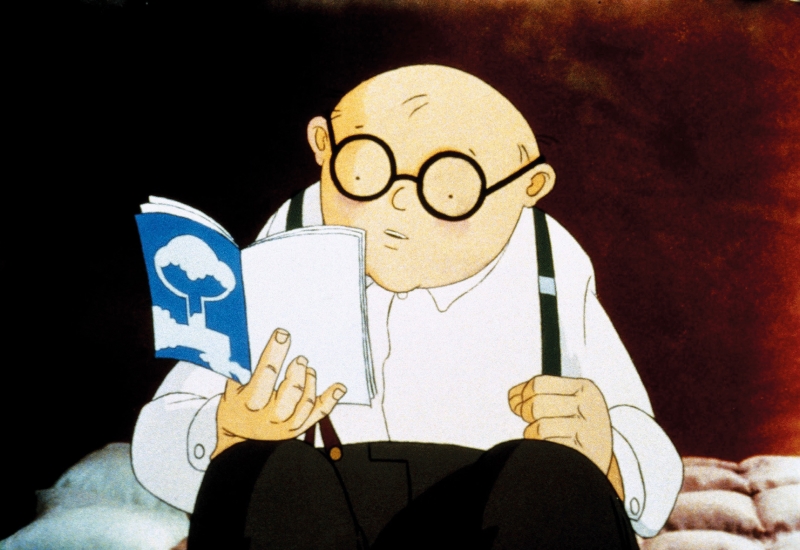 Jim Bloggs studies the Protect and Survive in When the Wind Blows (1986).

In print, Raymond Briggs’ graphic novel When the Wind Blows (later adapted as an animated film, radio and stage play) obliquely mentions various aspects of the Protect and Survive programme, and the BBC play Threads featured three of the series’ films: Stay at Home, Action After Warnings and Casualties.

Protect and Survive: How to Survive Nuclear War: