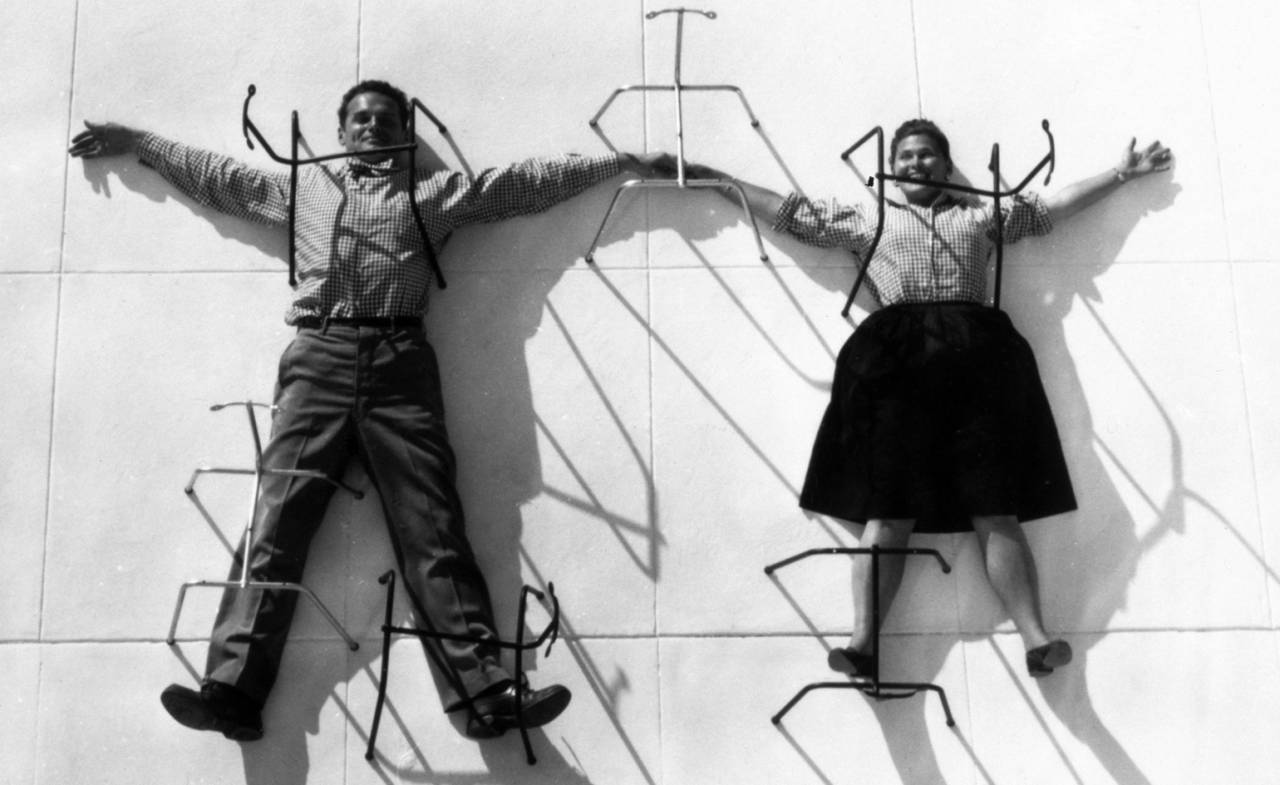 Ray and Charles Eames Via

Boeke, a peace activist and Quaker missionary married to Beatrice (1884-1976), a scion of the Cadbury Chocolate dynasty, created “De werkplaats” (the workshop), a school based on Maria Montessori’s methods and advocating sociocracy, a form of government based on trust, equality between individuals and consensus. Start at the local level in building bridges between individuals of all ages in your street and, so the theory goes, expand the connectivity to the world. 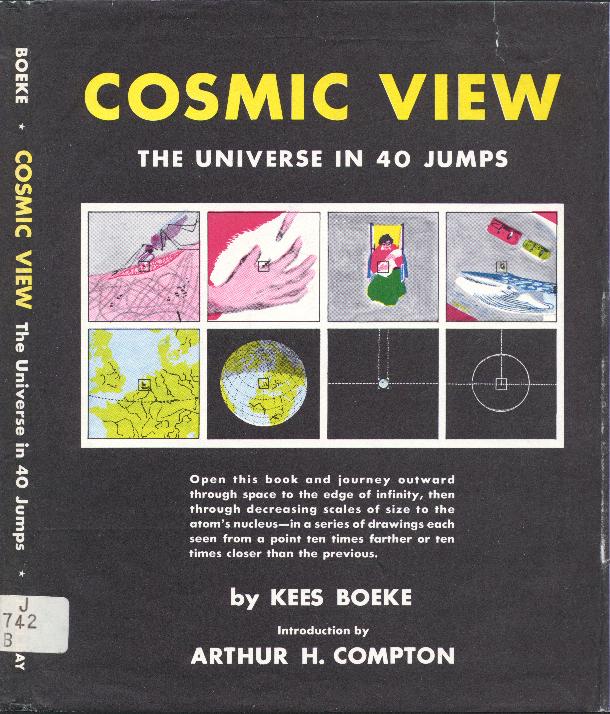 Kees writes in the introduction:

We all, children and grownups alike, are inclined to live in our own little world, in our immediate surroundings, or at any rate with our attention concentrated on those things with which we are directly in touch. We tend to forget how vast are the ranges of existing reality which our eyes cannot directly see, and our attitudes may become narrow and provincial. We need to develop a wider outlook, to see ourselves in our relative position in the great and mysterious universe in which we have been born and live.

At school we are introduced to many different spheres of existence, but they are often not connected with each other, so that we are in danger of collecting a large number of images without realizing that they all join together in one great whole. It is therefore important in our education to find the means of developing a wider and more connected view of our world and a truly cosmic view of the universe and our place in it… 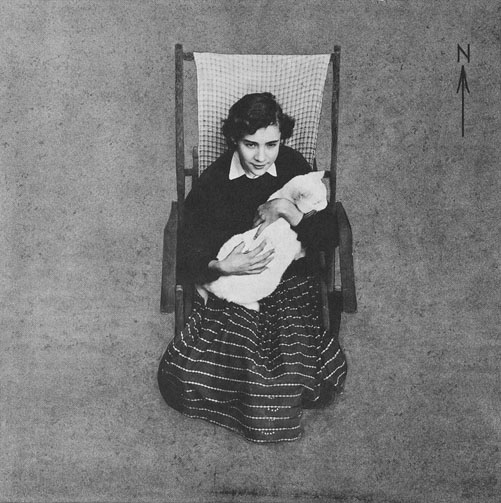 OUT: The first picture, from which we start, is as we said already one of a child sitting in front of the school, with a cat on her lap. It is drawn on a scale of 1 to 10.

Here we have the entire galactic system or galaxy. 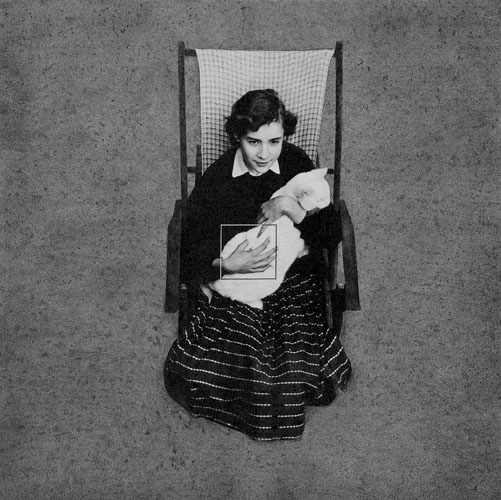 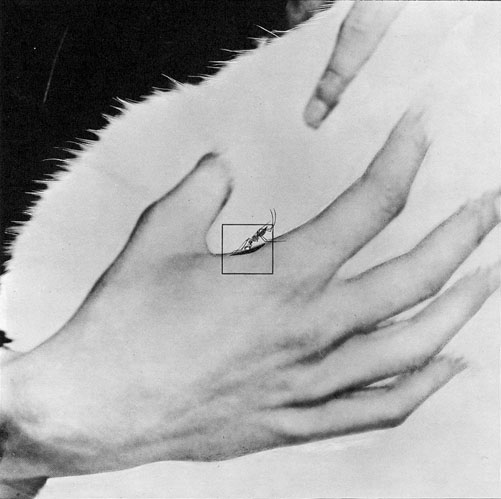 The living creature portrayed in this drawing is a mosquito, to be exact an anopheles, or malaria mosquito. 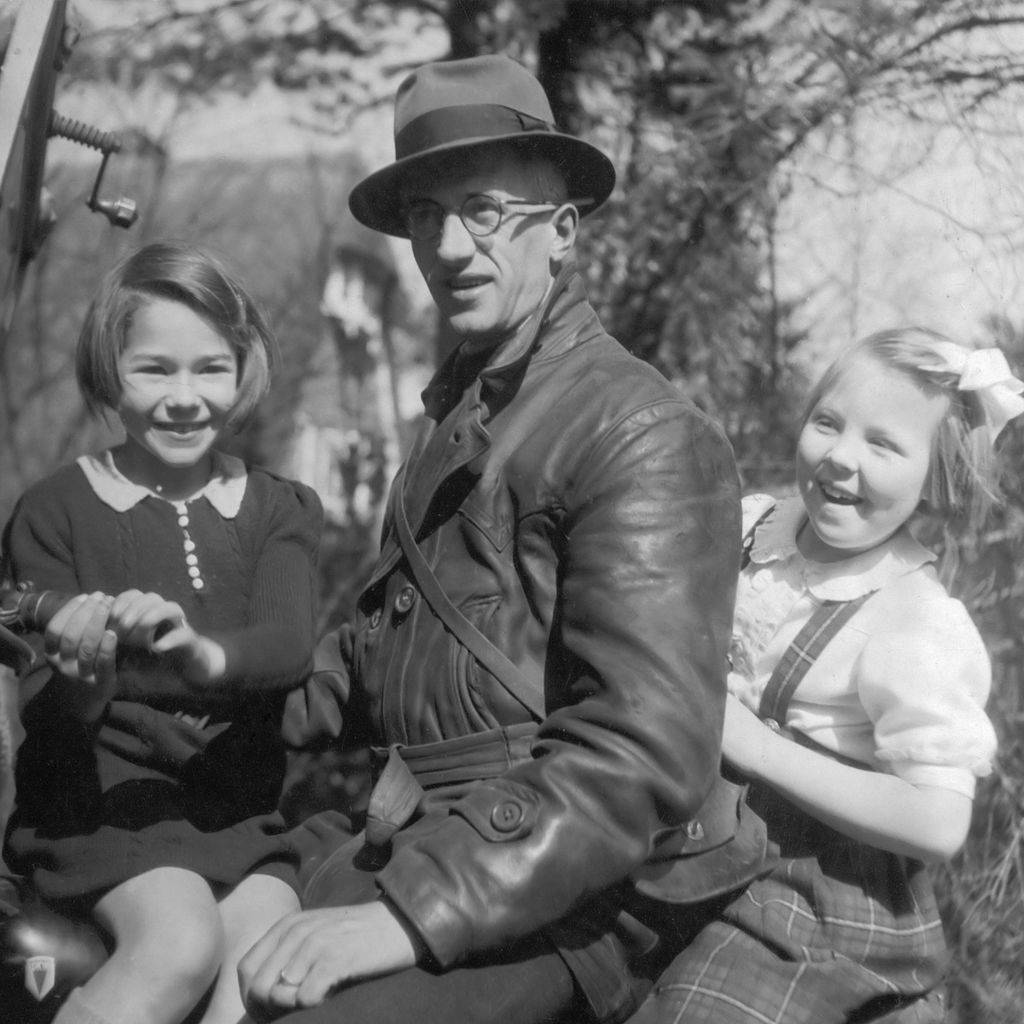 And so to the Eames film.

From a fixed point in Chicago’s Burnham Park, near Soldier Field, the camera zooms out by factors of ten (one power of ten per 10 seconds). By the end of the nine minute film, the viewer has journeyed 100 million light years from Earth and back again.

In one gasp, the viewer has experienced the unfathomably enormous universe and the marvels of the minute.

The picnic near the lakeside in Chicago was the start of a lazy afternoon early one October. It begins with a scene one meter wide which we view from just one meter away. Now every ten seconds we will look from ten times farther away and our field of view will be ten times wider. This square is ten meters wide and in ten seconds the next square will be ten times as wide. Our picture will centre on the picnickers even after they’ve been lost to sight. One hundred meters wide, the distance a man can run in ten seconds, cars crowd the highway, power boats lie at their docks, the colourful bleachers are Soldier Field. This square is a kilometre wide, one thousand meters, the distance a racing car can travel in ten seconds. We see the Great City on the lake shore. Ten to the fourth meters, ten kilometres, the distance a supersonic aeroplane can travel in ten seconds. We see first around and the end of Lake Michigan, then the whole Great Lake. Ten to the fifth meters, the distance a hovering satellite covers in ten seconds, long parades of clouds, the day’s weather in the Middle West. Ten to the sixth, a one with six zeros, a million meters. Soon the Earth will show as a solid sphere. We are able to see the whole Earth now, just over a minute along the journey. The Earth diminishes into the distance but those background stars are so much farther away that they do not yet appear to move. A line extends at the true speed of light. In one second, it half crosses the tilted orbit of the moon. Now we mark a small part of the path in which the Earth moves about the Sun.

Now the orbital path of the neighbour planets, Venus and Mars then Mercury. Entering our field of view is the glowing centre of our solar system – the Sun, followed by the massive outer planets, swinging wide in their big orbits. That aureole belongs to Pluto. A fringe of a million comets too faint to see completes the solar system. Ten to the fourteenth, as the solar system shrinks to one bright point in the distance, our Sun is plainly now only one among the stars. Looking back from here we note four southern constellations, still much as they appear from the far side of the Earth. This square is ten to the sixteenth meters, one light year, not yet out to the next star, our last ten-second step took us ten light years further, the next will be a hundred. Our perspective changes so much at each step now that even the background stars will appear to converge. At last we pass the bright star Arcturus and some stars of the Dipper. Normal but quite unfamiliar, stars and clouds of gas surround us as we traverse the milky way galaxy. Giant steps carry us into the outskirts of the galaxy and as we pull away, we begin to see the great flat spiral facing us. The time and path we chose to leave Chicago has brought us out of the galaxy along a course nearly perpendicular to its disk. The two little satellite galaxies of our own are the clouds of Magellan. Ten to the twenty-1 second power, a million light years, groups of galaxies bring a new level of structure to the scene, glowing points are no longer single stars but whole galaxies of stars, seen as one. We pass a big vulgar cluster of galaxies among many others, a hundred million light years out. As we approach the limit of our vision, we pause to start back home. This lonely scene, the galaxies like dust, is what most of space looks like. This emptiness is normal. The richness of our own neighbourhood is the exception. 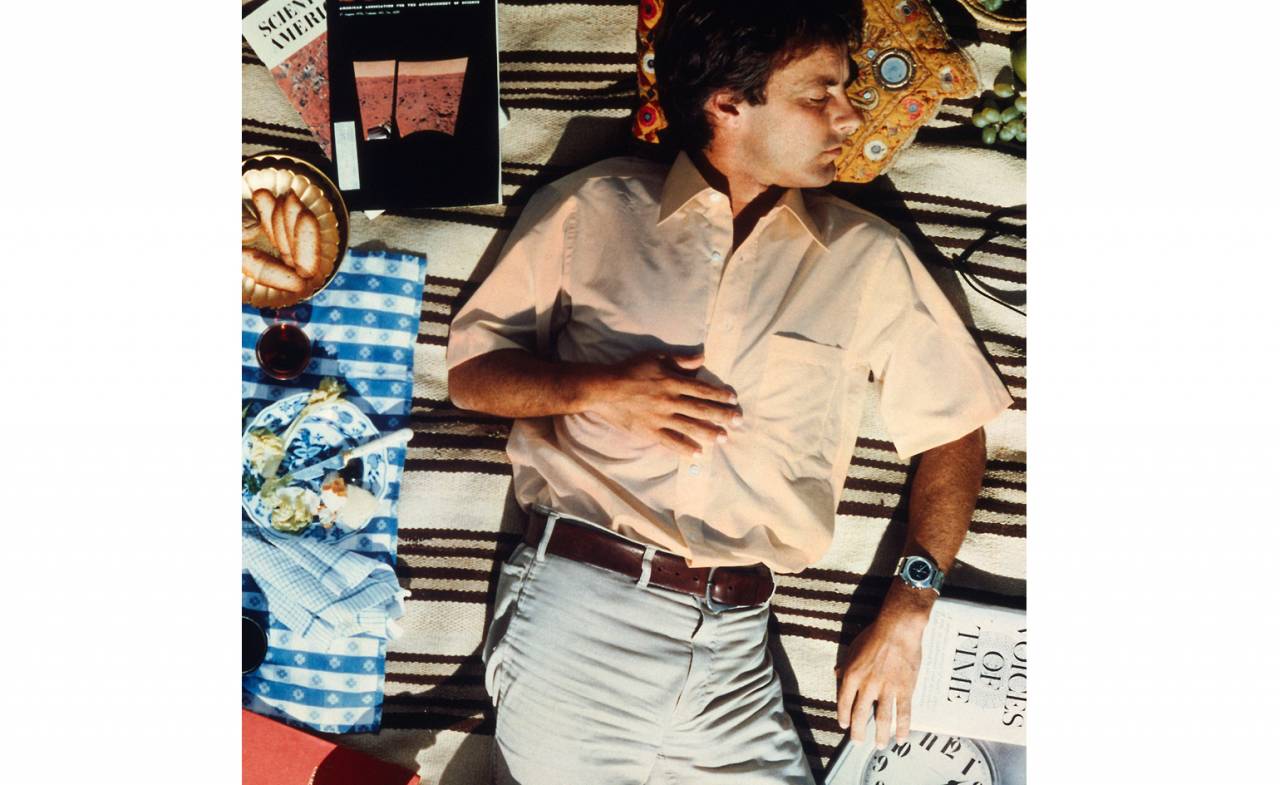 The trip back to the picnic on the lake front will be a sped up version, reducing the distance to the Earth surface by one power of ten every two seconds. In each two seconds we will appear to cover 90% of the remaining distance back to Earth, noticing alternation between great activity and relative inactivity. A rhythm that will continue all the way to our next goal, a proton and nucleus of a carbon atom beneath the skin on the hand of the sleeping man at the picnic. Ten to the ninth meters, ten to the eighth, seven, six, five, four, three, two, one. We are back at our starting point. We slow up at one meter. Ten to the zero power. Now we reduce the distance to our final destination by 90% every ten seconds. Each step much smaller than the one before. At ten to the minus two, one hundredth of the meter, one centimetre, we approach the surface of the hand. In a few seconds we will be entering the skin, crossing layer after layer from the outermost dead cells into a tiny blood vessel within. Skin layers vanish in turn and outer layers of cells, Felty collagen, a capillary containing red blood cells and a roughly lymphocyte. We enter the white cell, among its vital organelles, the porous wall of the cell nucleus appears. The nucleus within holds the reality of the man in a coiled coils of DNA. As we close in, we come to the double helix itself, a molecule like a long twisted ladder whose runs of paired bases spell out twice – in an alphabet of four letter, the words of a powerful genetic message.

At the atomic scale, the interplay of four men (?) in motion becomes more visible. We focus on one commonplace group of three hydrogen atoms bonded by electrical forces to a carbon atom. Four electrons make up the outer shell of the carbon itself. They appear in quantum motion as a swarm of shimmering points. At ten to the minus ten meters, one ångstrom, we find ourselves right among those outer electrons. Now we come upon the two inner electrons held in a tighter swarm. As we draw toward the atom’s attracting centre, we enter upon a vast inner space. At last the carbon nucleus. So massive and so small. This carbon nucleus is made up of six protons and six neutrons. We are in the domain of universal modules. There are protons and neutrons in every nucleus. Electrons in every atom. Atoms bonded to every molecule out of the farthest galaxy. As a single proton fills our scene we reach the edge of present understanding. Are these some quarks of intense interaction? Our journey has taken us through forty powers of ten. If now the field is one unit then when we saw many clusters of galaxies together, it was ten to the fortieth or one and forty zeros. 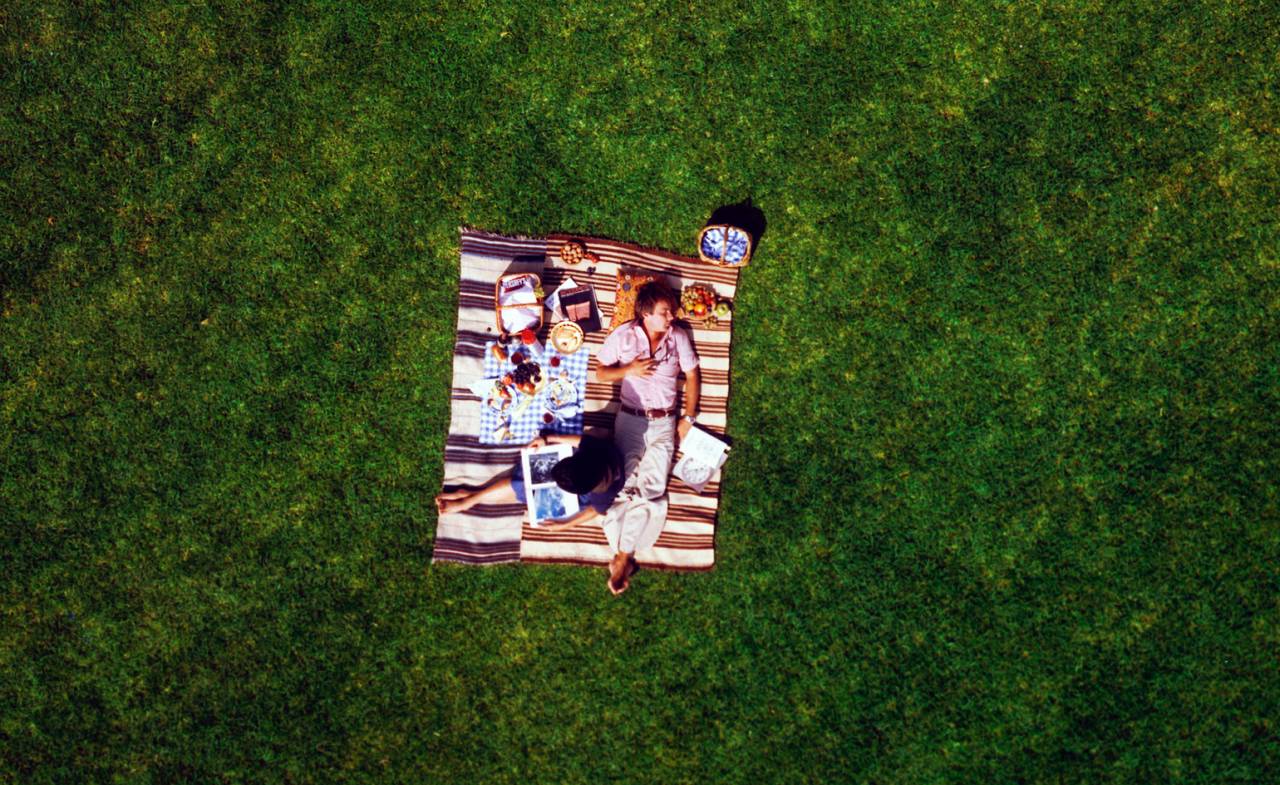