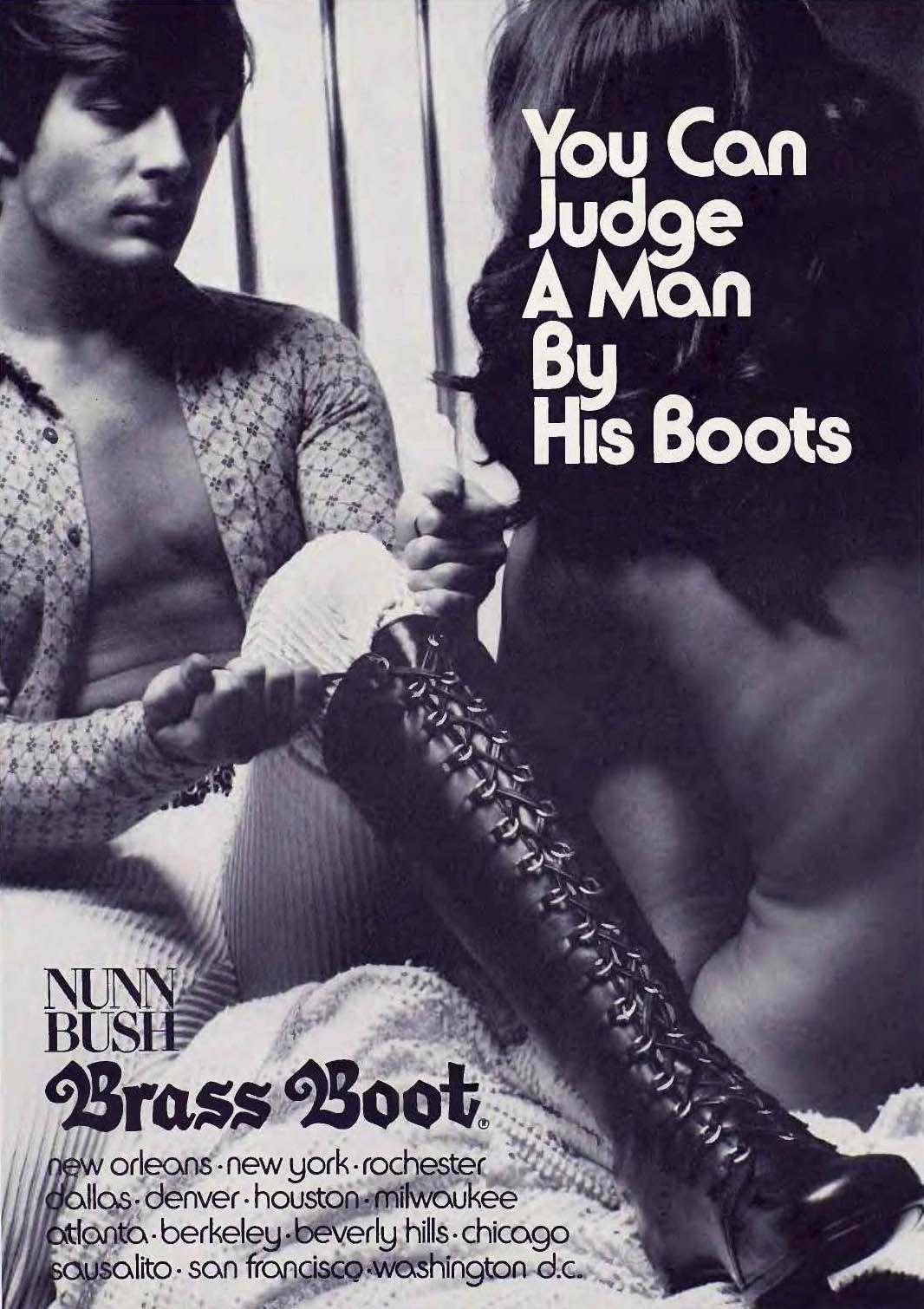 He’s tightening his big-ass boot, which means he’s already done the deed, and now it’s time to be moving on.  It’s the 1970s, and he’s got other chicks to please.

Yes, this was a time when all preceding social mores and customary dress went out the window.  To be more accurate – they went out the window, were then tread upon, beat to death, mocked and then set aflame.  But it was a pretty dichotomous/bipolar time – you had your the extreme styles like the one above, but you also had the more traditional footwear… 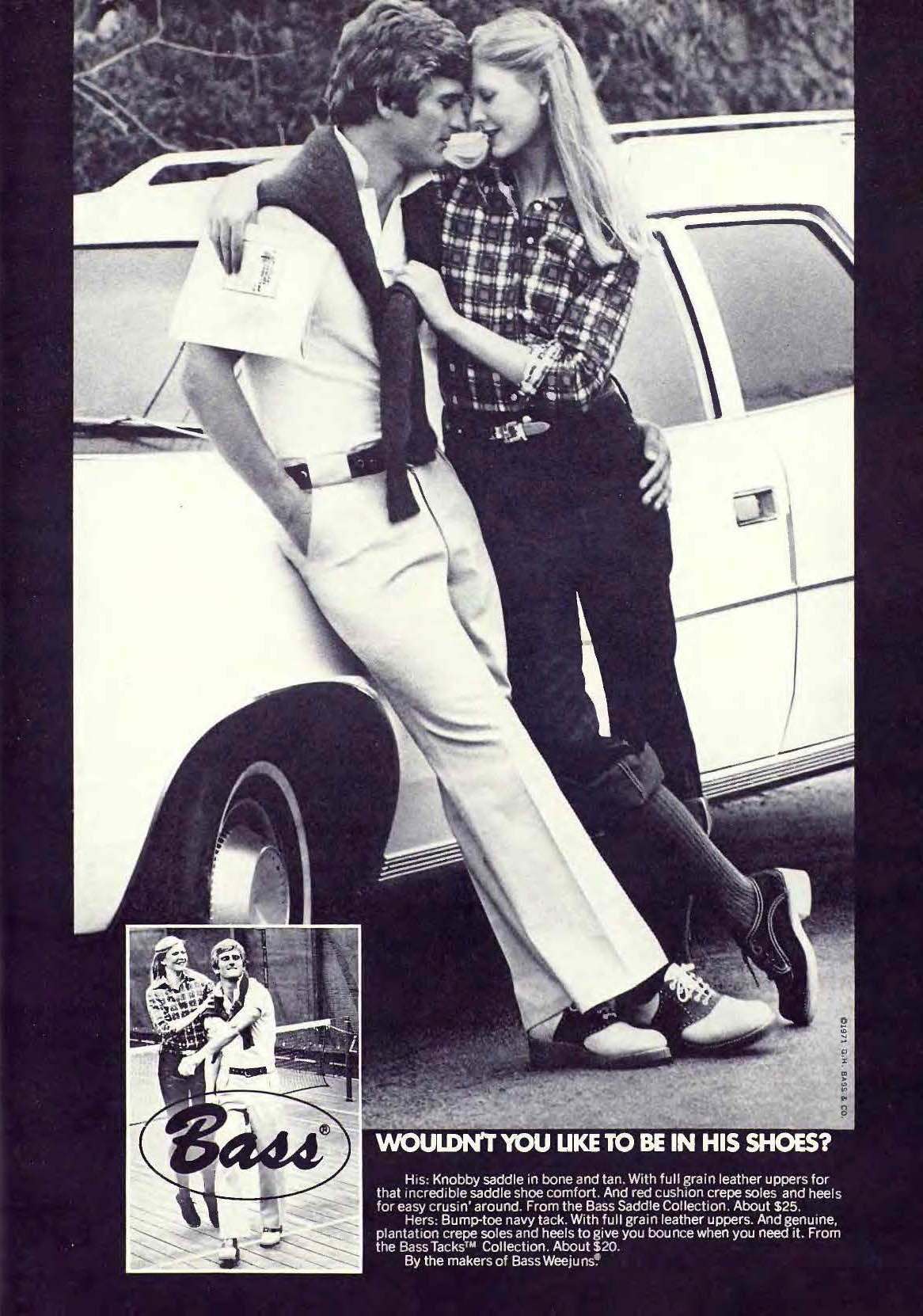 The conservative time-honored saddle shoe was still an acceptable shoe, despite the counter-culture revolution.  Yet, there’s still that element of sex in this advert – so, things aren’t what they used to be. 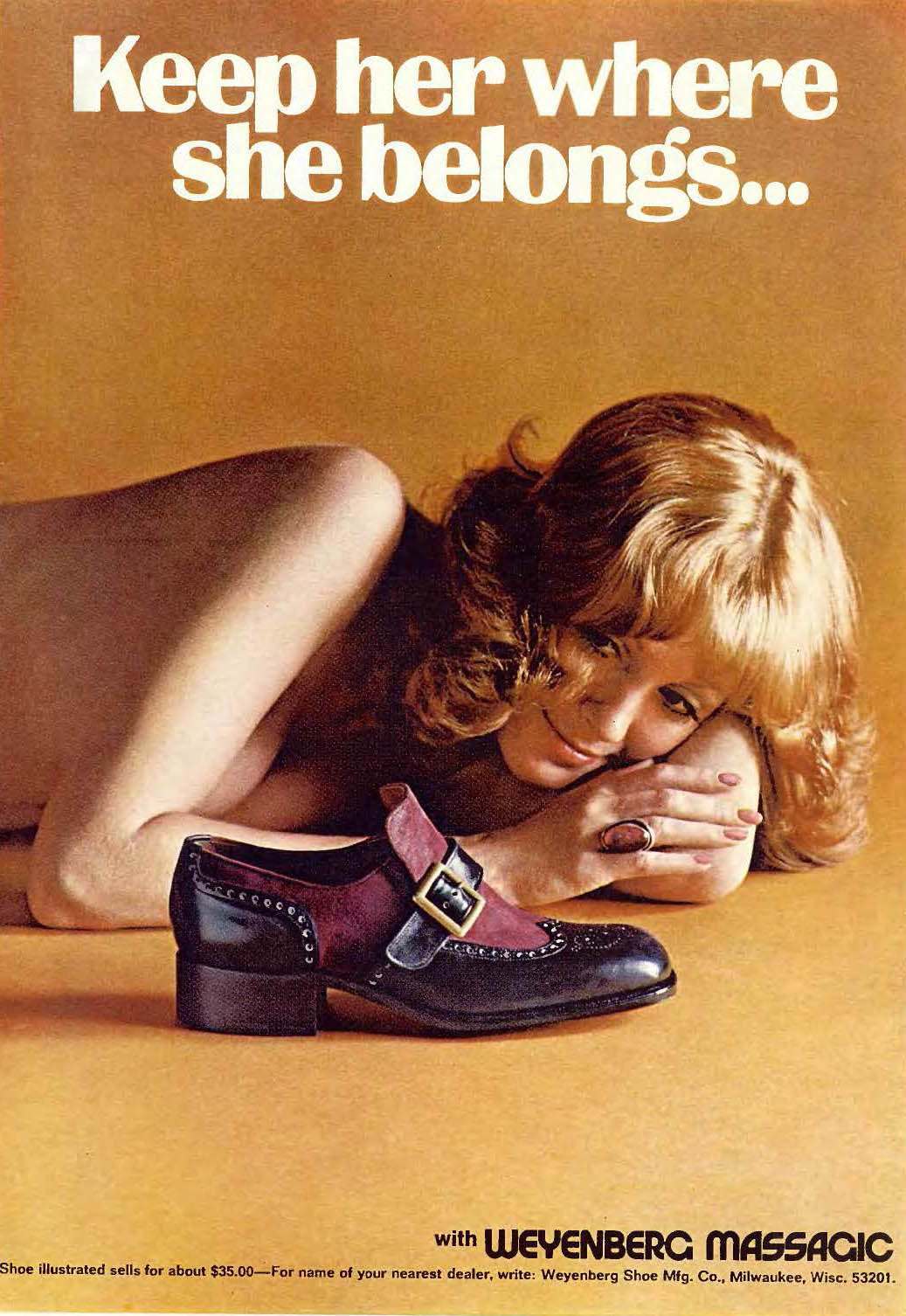 One of the most sexist advertisements ever put to print.   It commands the males of the world to “put her in her place” – and where would that place be?  Naked, and literally worshipping the ground he walks upon (and the shoe he’s walking in). 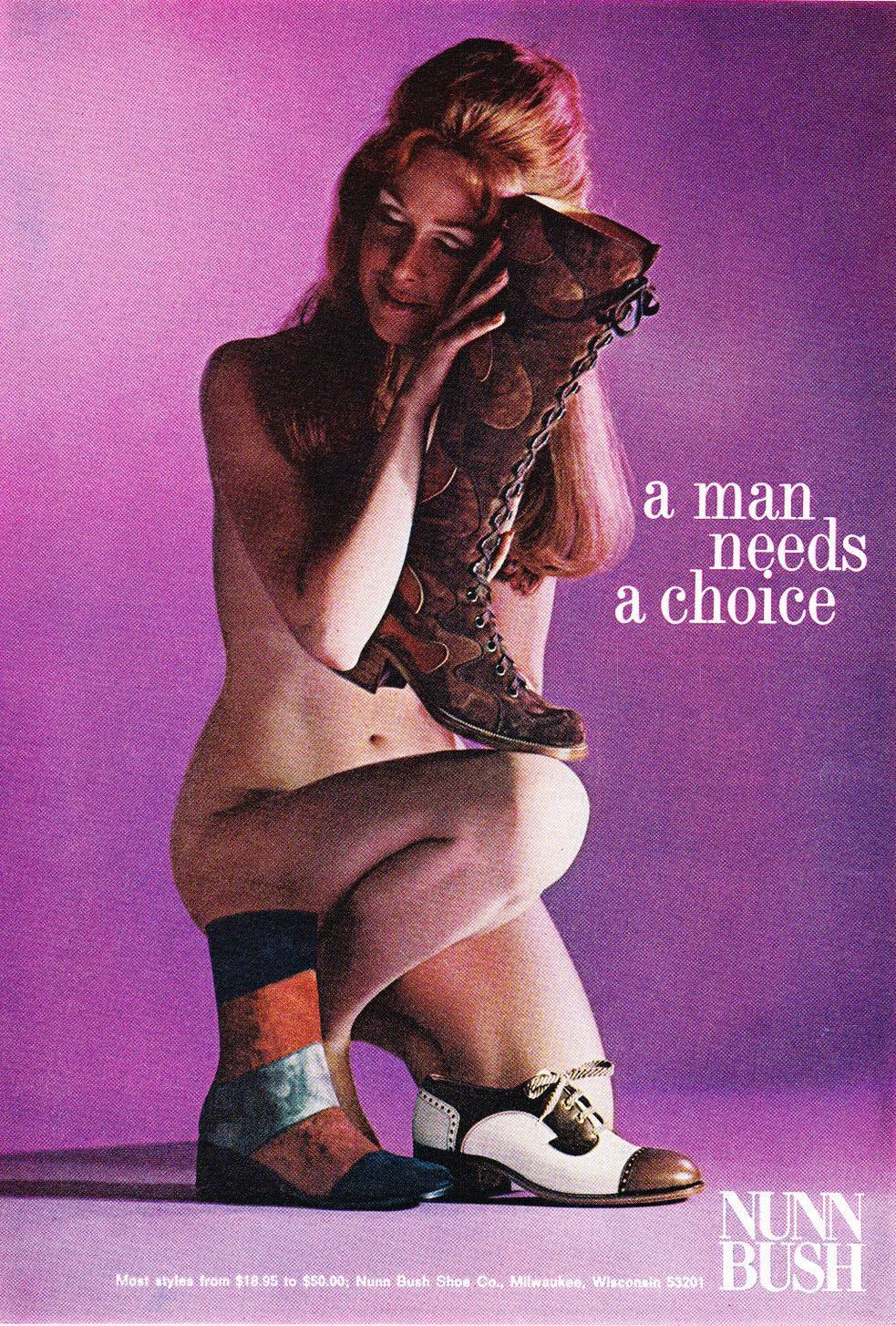 This one by Nunn Bush, a completely different company.  It’s important to note that adverts like these primarily appeared in men’s magazines (Playboy, Esquire, GQ, Stag, Oui) and magazines with an almost exclusively male market (Omni, National Lampoon)… far from the prying eyes of women who were in the midst of their own liberation movement (and wouldn’t have appreciated these ads so much).

And speaking of the Women’s Lib…. 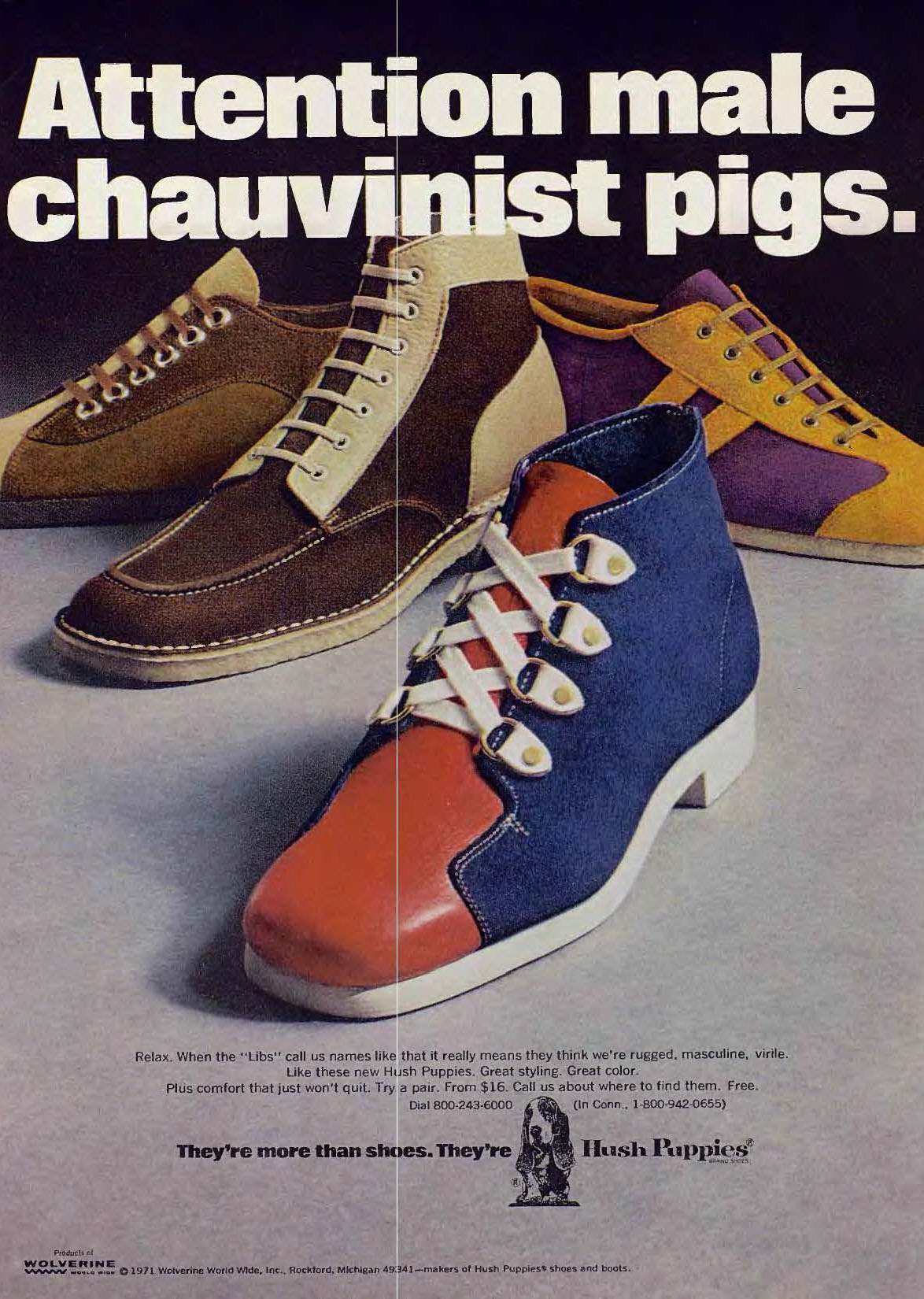 “Relax.  When the ‘Libs’ call us names like that it really means they think we’re rugged, masculine, virile.  Like these new Hush Puppies.”

Who knew shoe adverts would be Ground Zero for such anti-women’s lib sentiment? 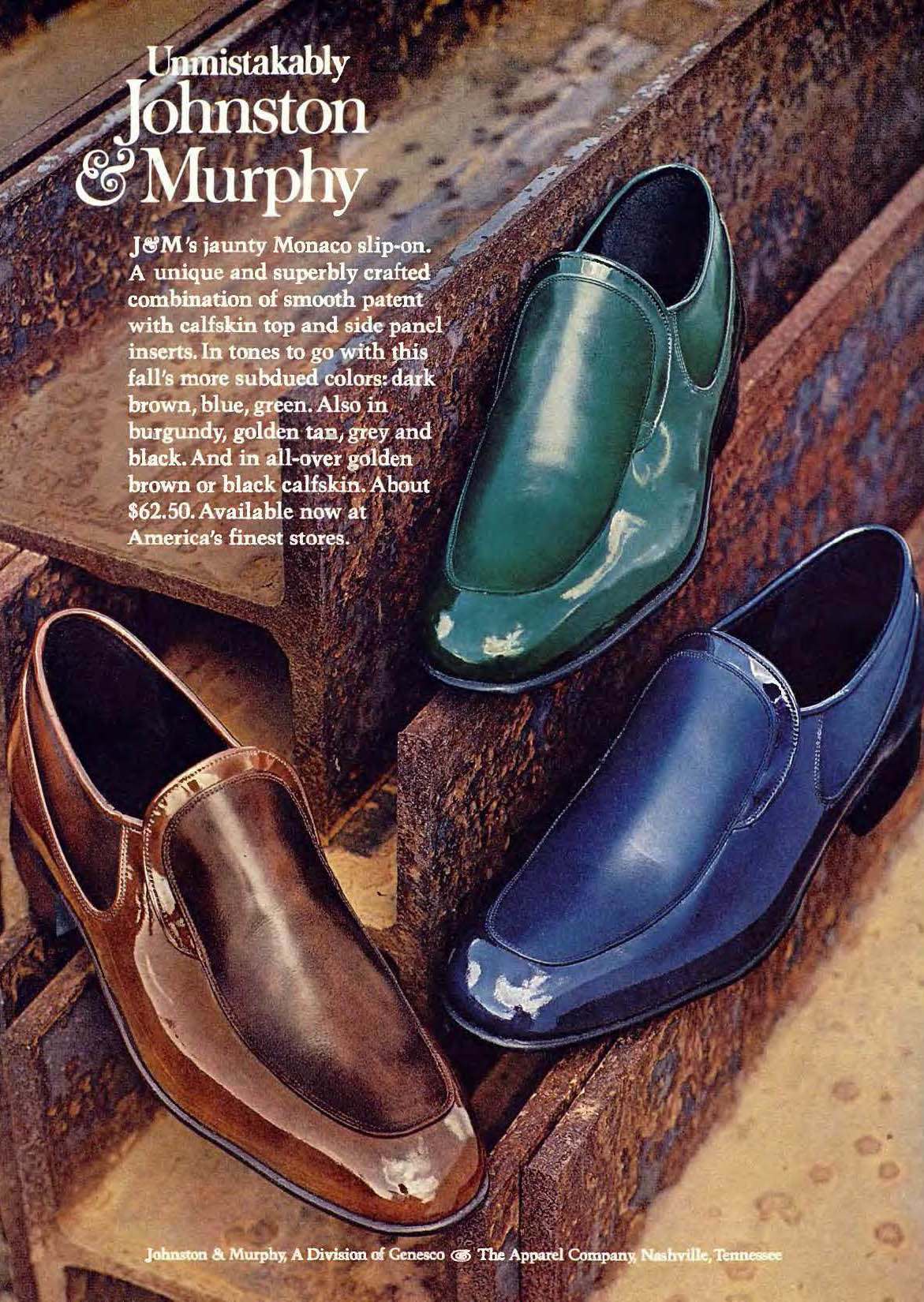 My eyes!!  What’s amazing is that the advert states that these are “tones to go with this fall’s more subdued colors”… subdued?  One can only imagine what was on the previous season’s palette – maybe, Neon Nacho? 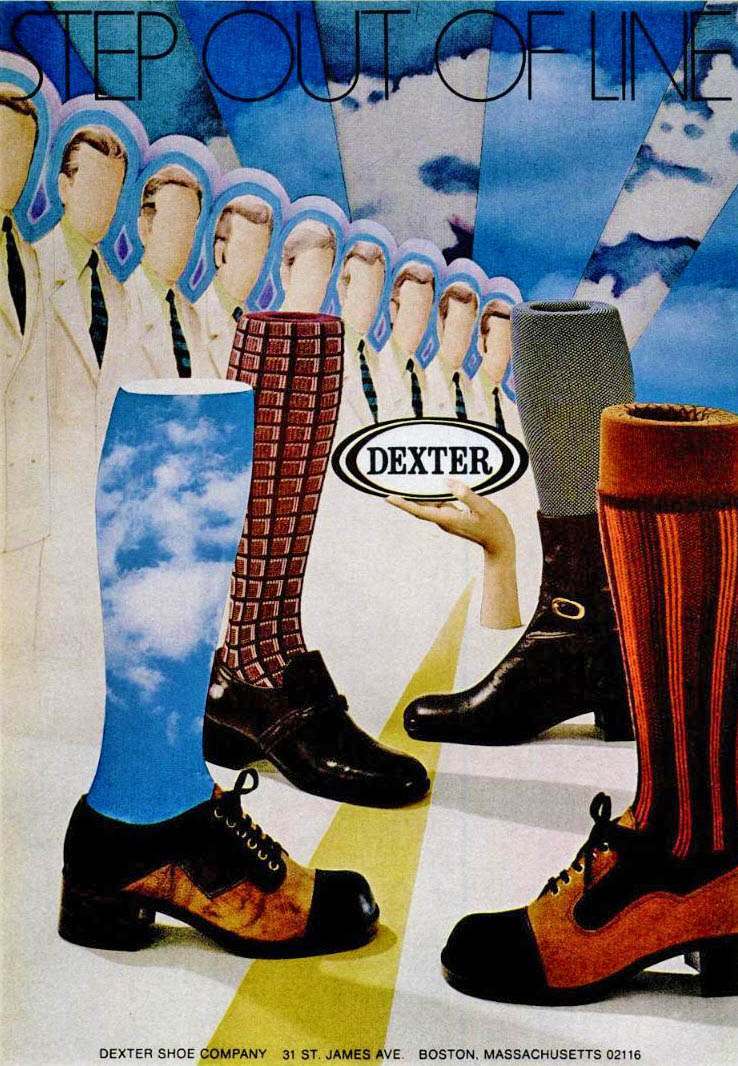 Dexter Shoes – for all your pimpwear needs. 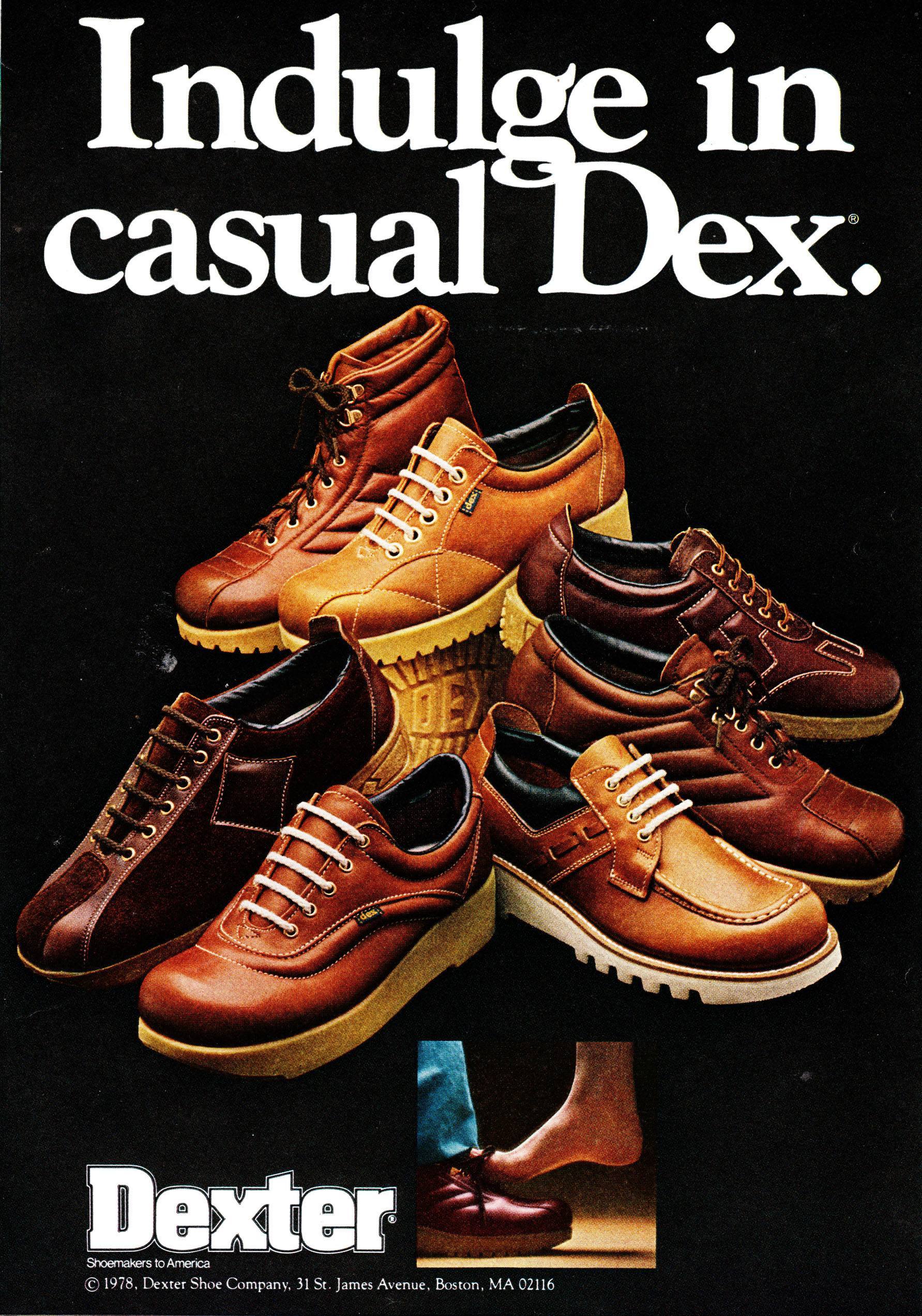 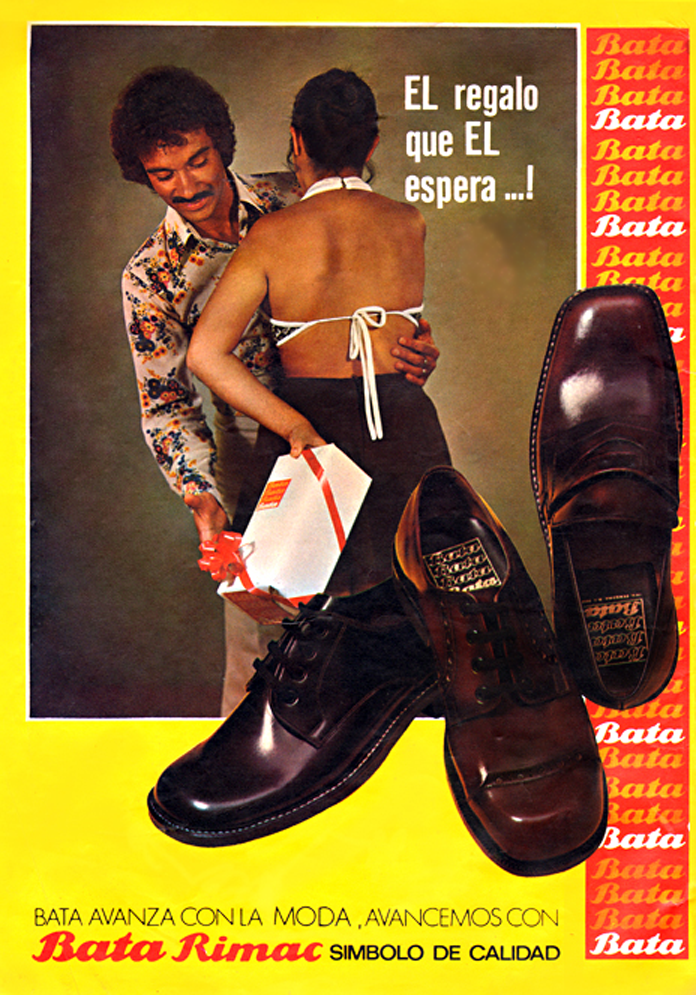 He was about to untie that strap, but was diverted by the gift.  At least that’s how imagine it played out. 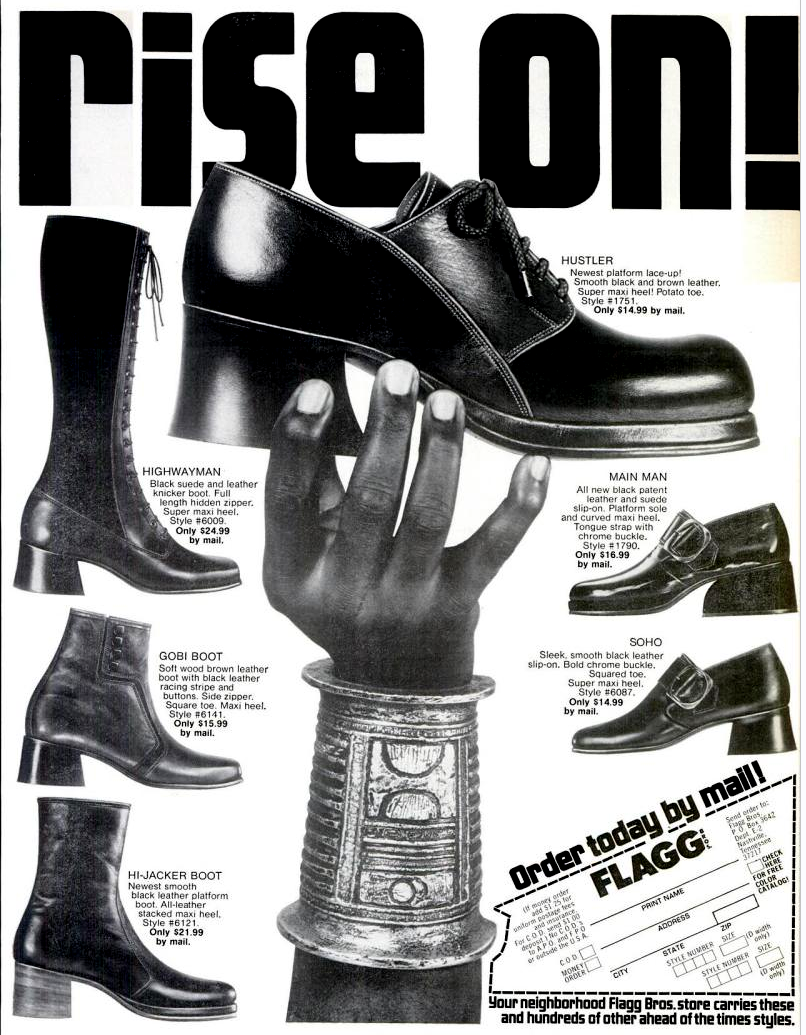 Flagg Brothers was the ultimate pimpwear supplier.  Check out the names of these shoes: Hi-Jacker Boot, Main Man, Highwayman, and, of course, the Hustler. 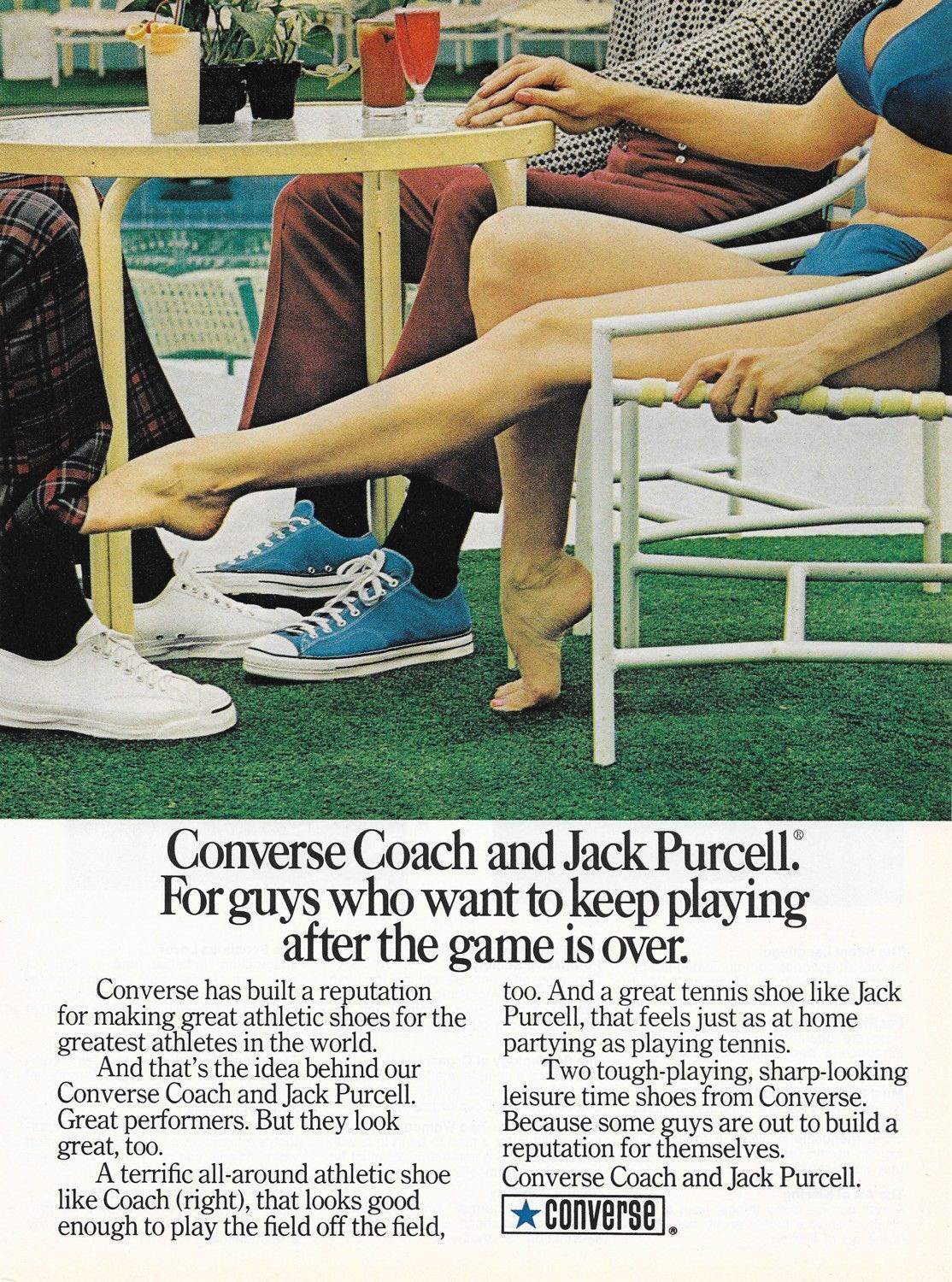 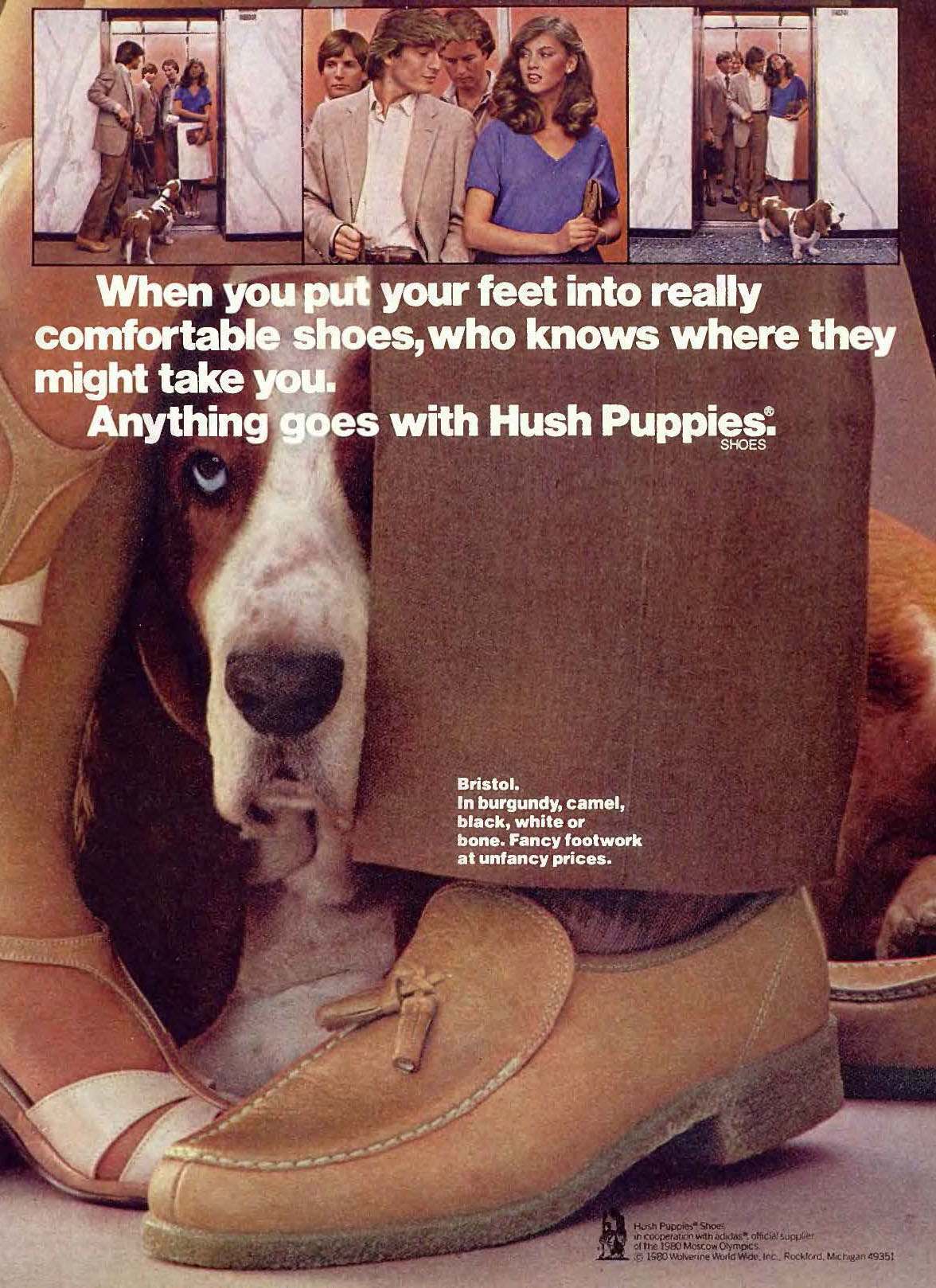