Bruno had enjoyed a rapid rise in boxing 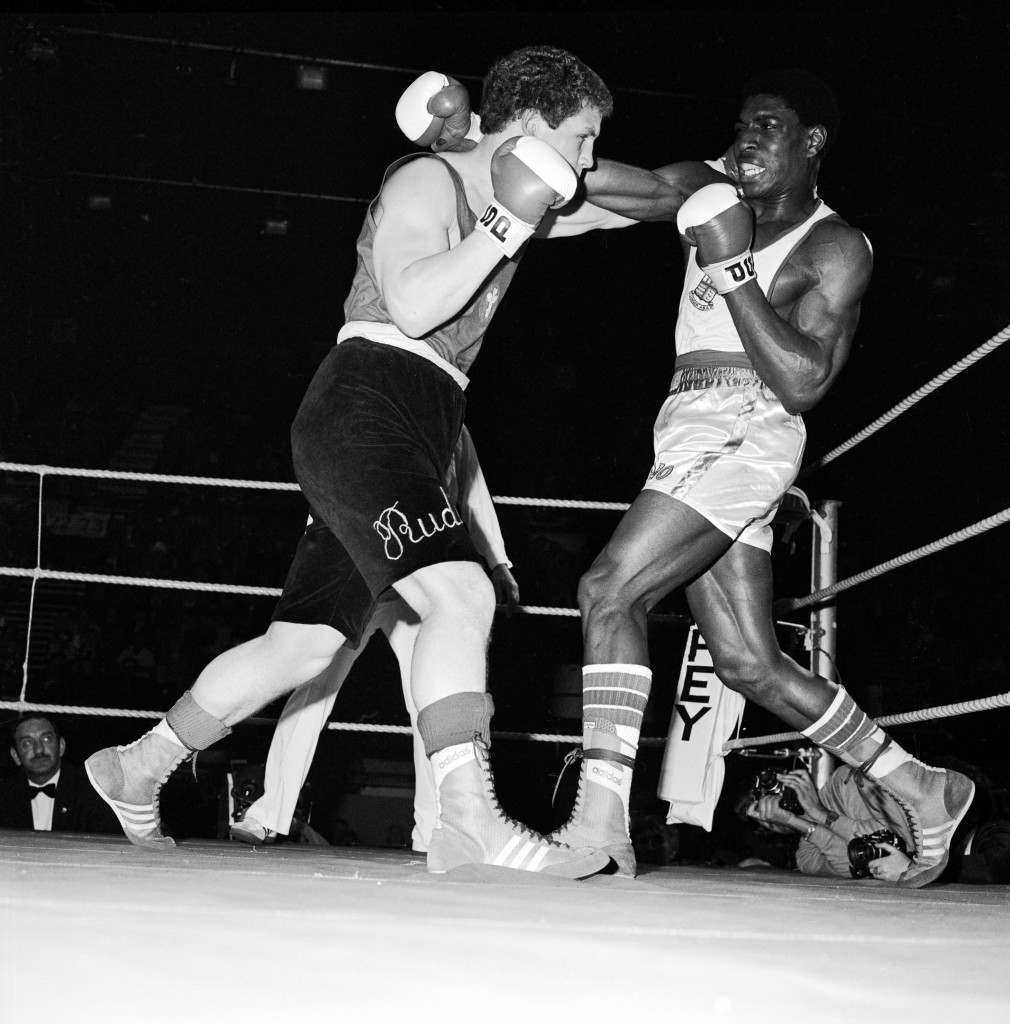 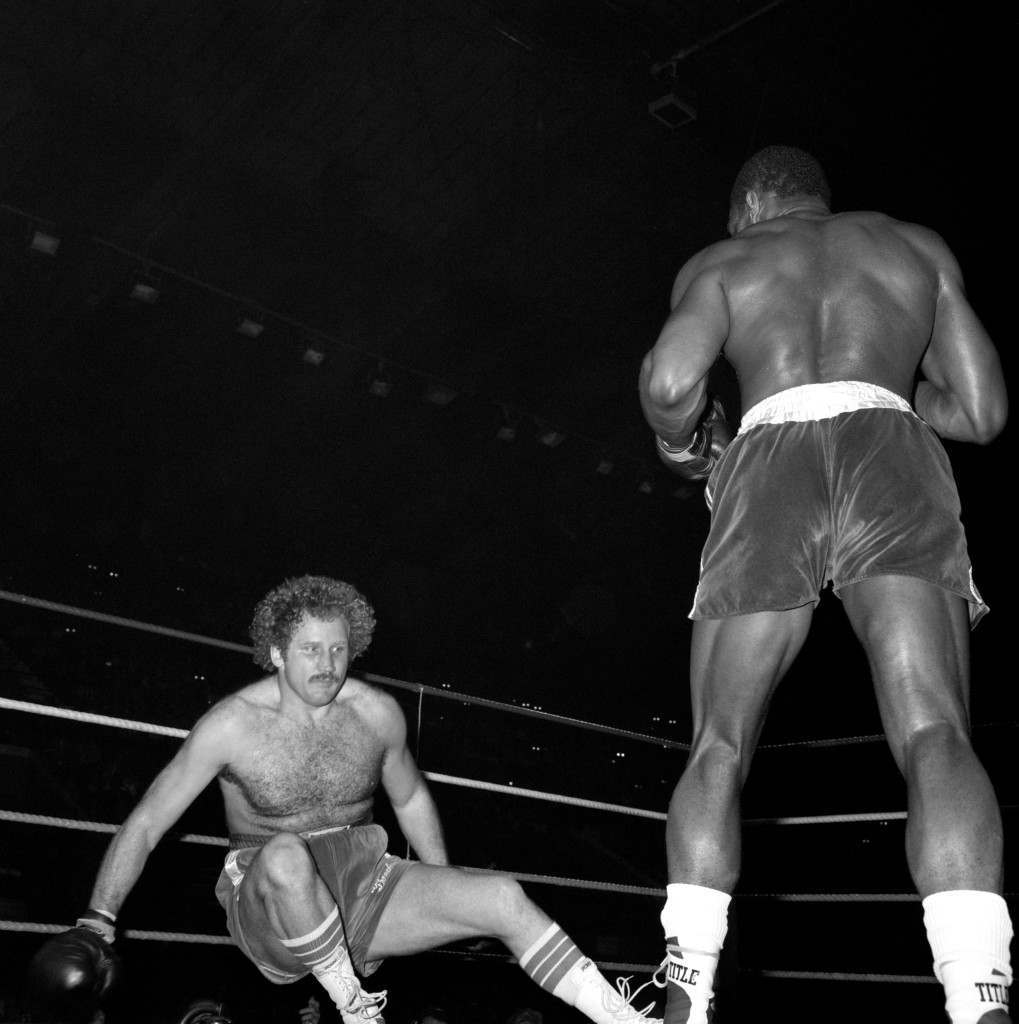 Great Britain’s Frank Bruno putts American Scott LeDoux on the canvas during the fight. Frank Bruno went on to win the fight by way of Technical Knock Out in the 3rd round.
Ref #: PA.11384128
Date: 03/05/1983 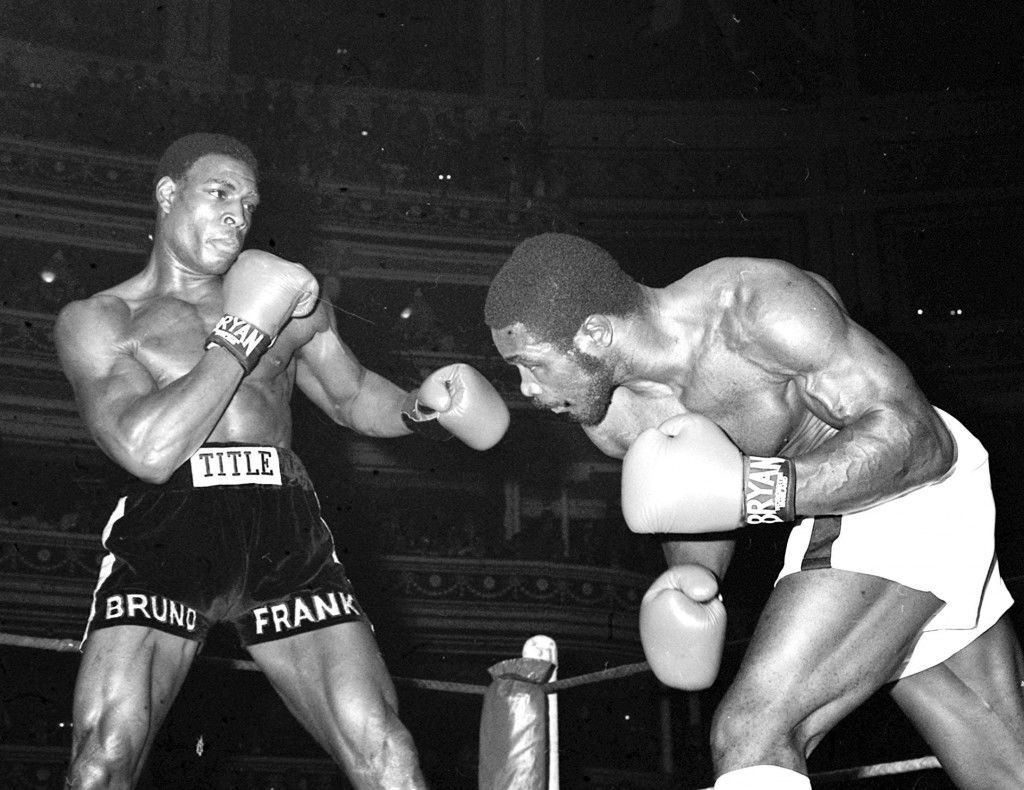 Britain’s unbeaten heavyweight Frank Bruno (left) — 19 wins inside the distance, attacks opponent Floyd “Jumbo” Cummings of America during tonight’s 10-round contest at the Royal Albert Hall, London which the London man won in the 7th round.
Date: 11/10/1983 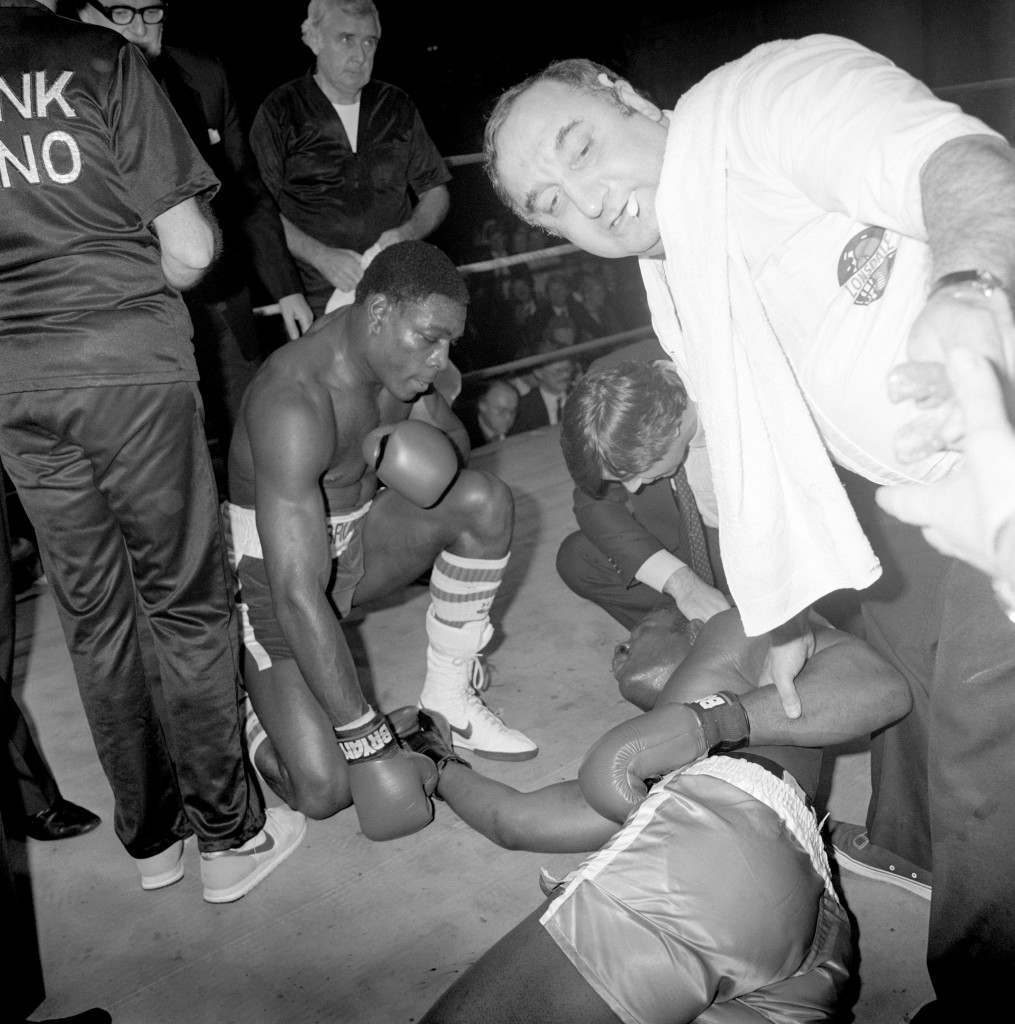 Bruno of course was the darling of British boxing in the eighties, although I probably wouldn’t use that word if I ever met him. Through his relationship with commentator Harry Carpenter, and his initial exploits in the ring, Bruno had enchanted the nation, bringing hope to boxing fans that finally we had found a great British heavyweight prospect, and also amusing us with his humour and nature outside the ring too. 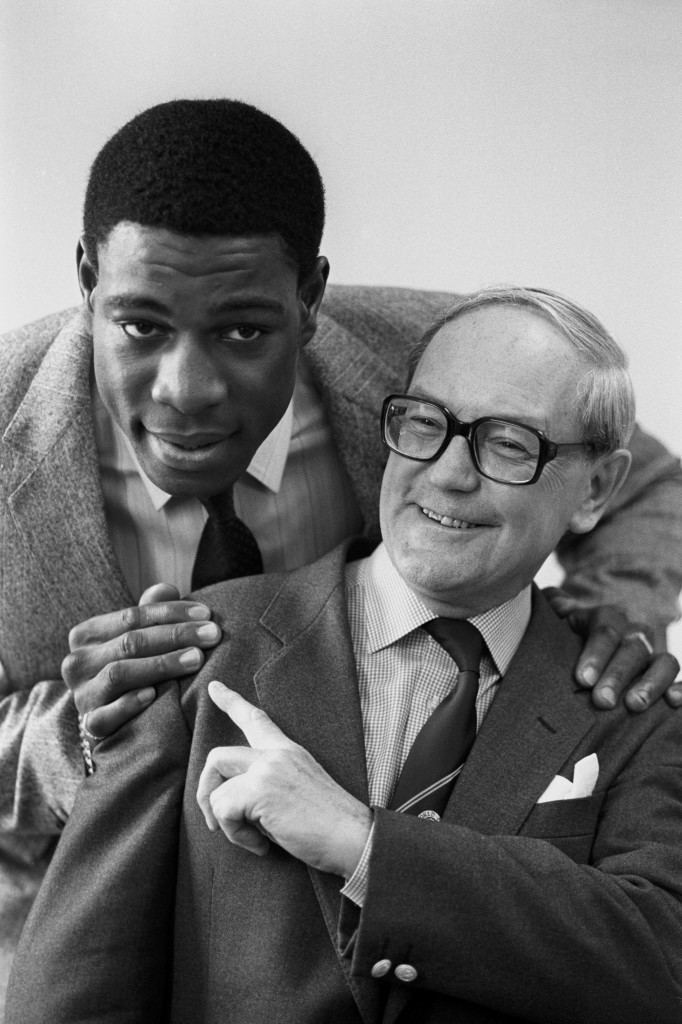 After 21 straight wins between 1982-1984, Bruno came unstuck in the final round against James ‘Bonecrusher’ Smith, but had recovered sufficiently to gain a crack at the WBA title against America’s Tim Witherspoon in 1986.

The fight with Witherspoon was a big affair. 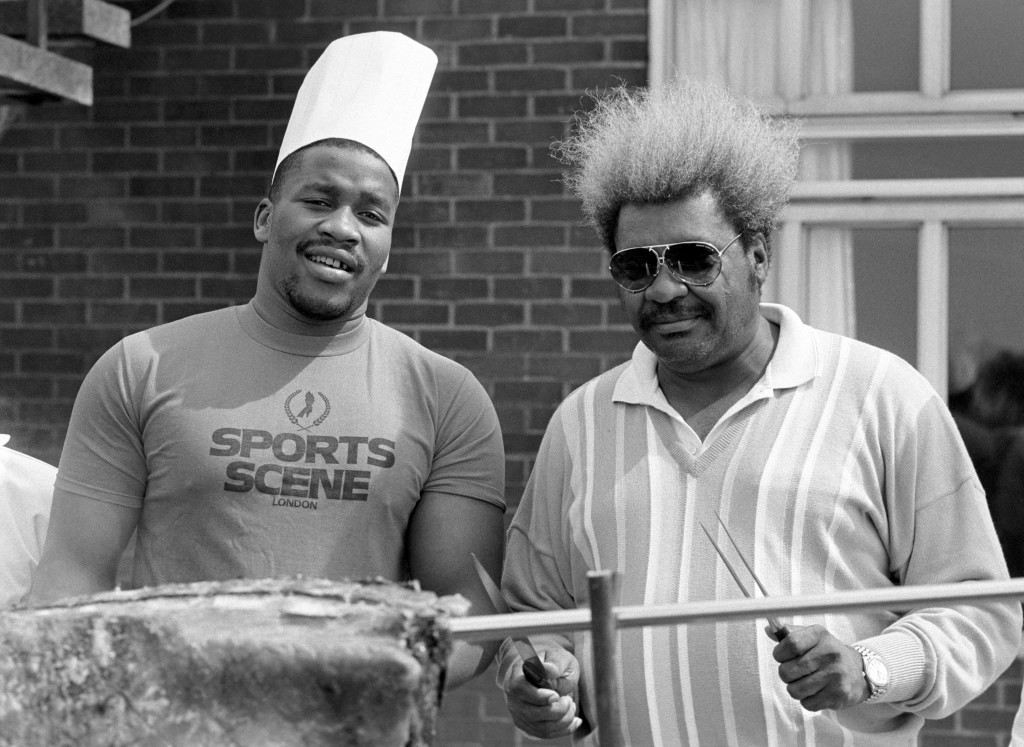 American World Heavyweight boxing champion Tim Witherspoon dons a chef’s hat as promoter Don King prepares to carve the meat during an American-style barbecue hosted by the boxer in Basildon. Witherspoon defends his title against Frank Bruno at Wembley.
Date: 13/07/1986 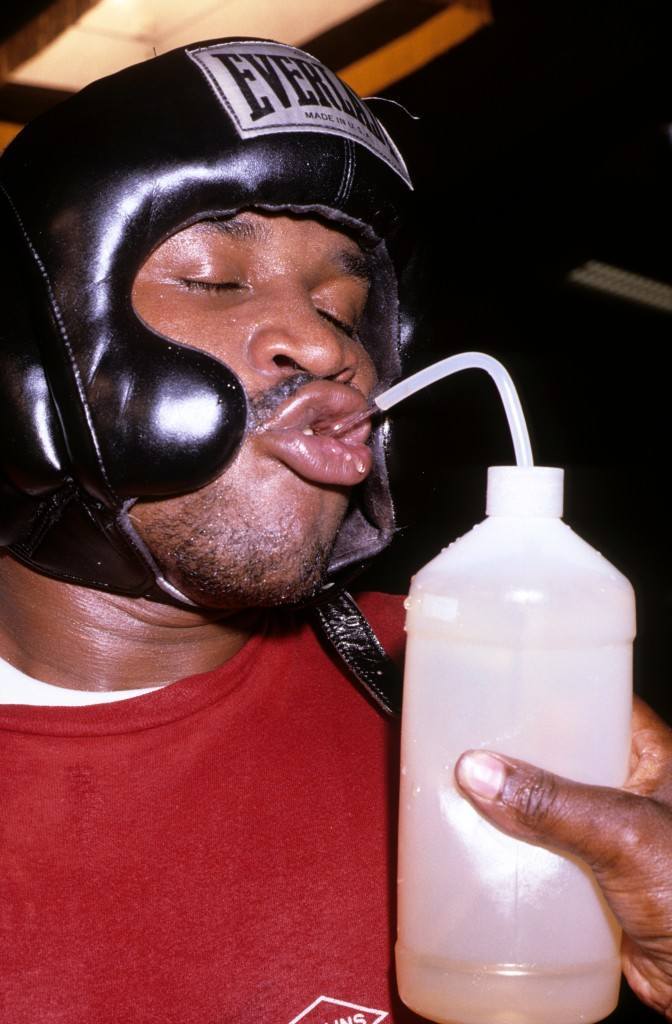 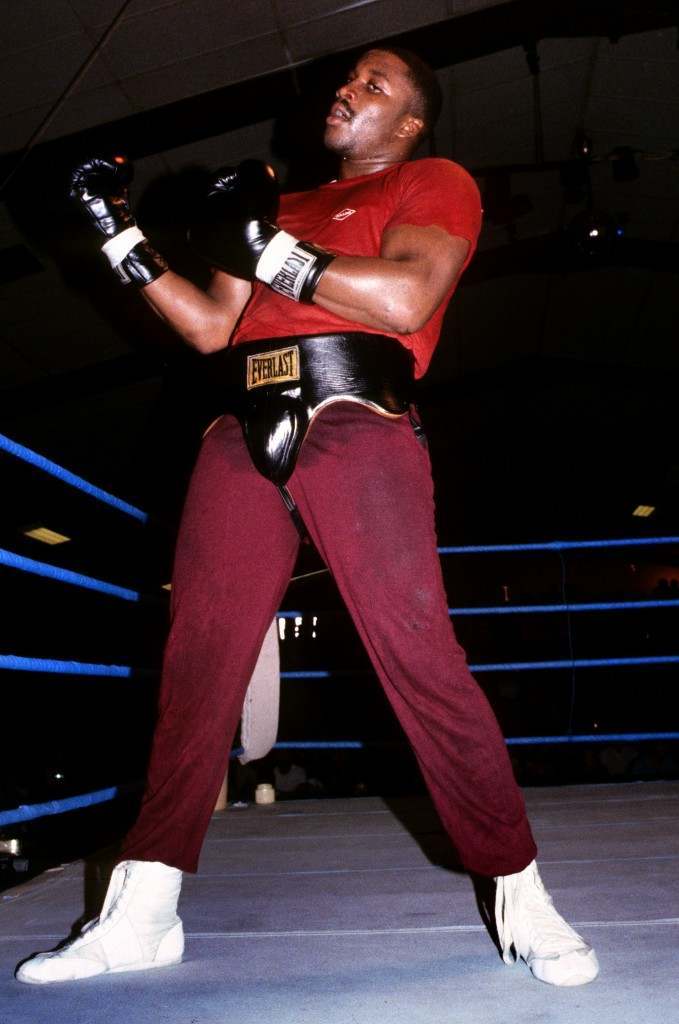 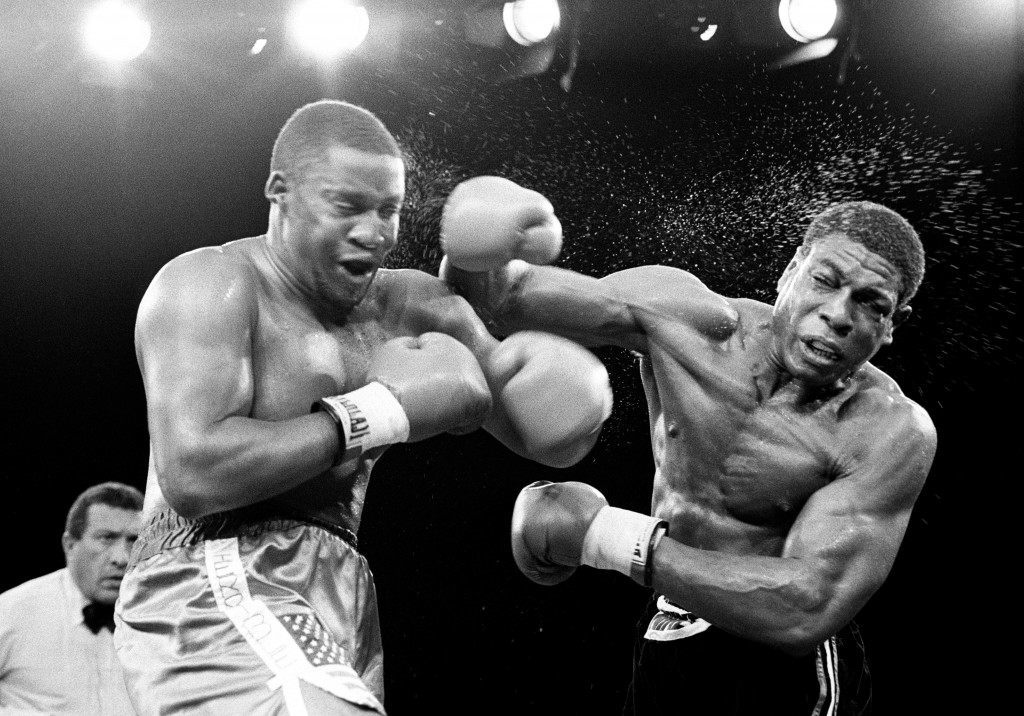 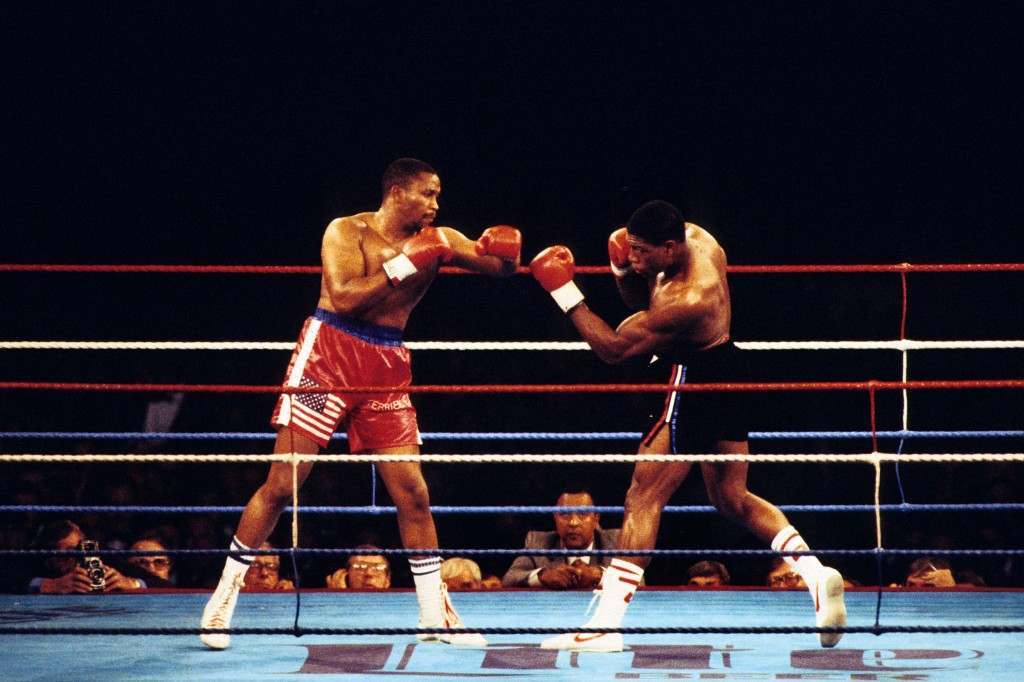 Action from the bout between Tim Witherspoon and Frank Bruno. Witherspoon went on to defeat Bruno in the 11th round to retain his WBA title belt at Wembley Stadium.
Date: 19/07/1986 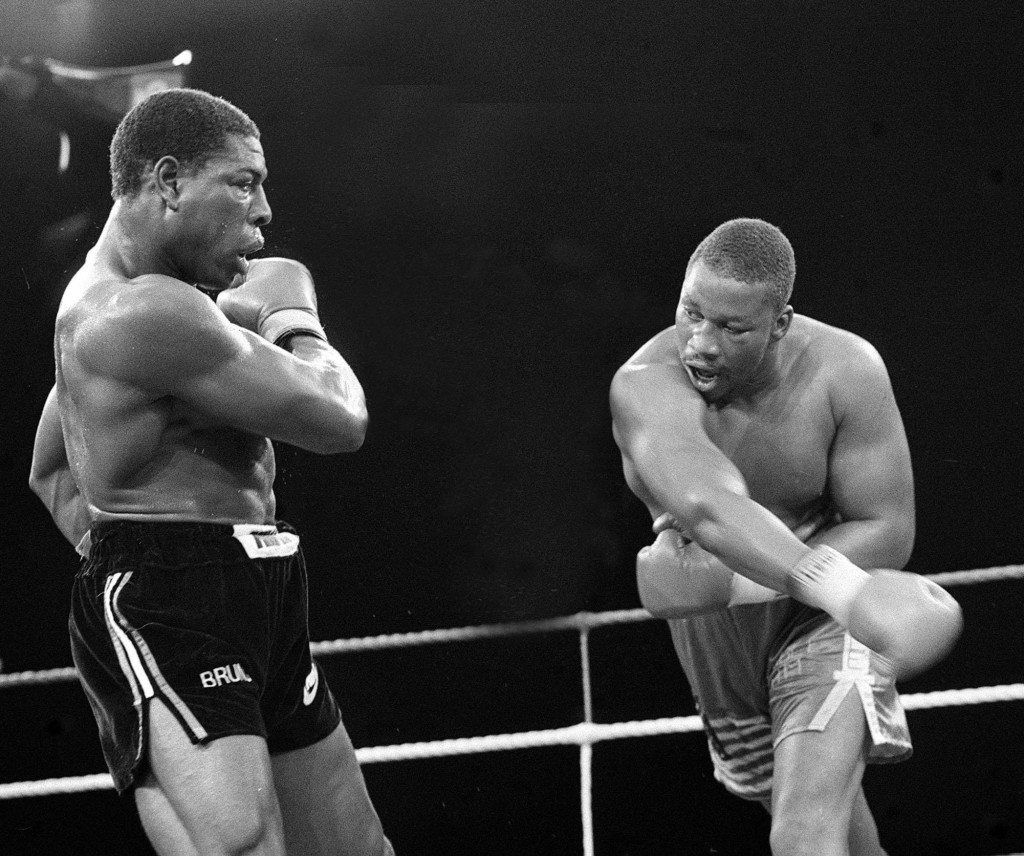 Despite leading in the fight, Bruno’s lack of stamina came back to haunt him, and Witherspoon finished the fight in round 11, meaning Bruno had to start again on the path to another tilt at the heavyweight crown. 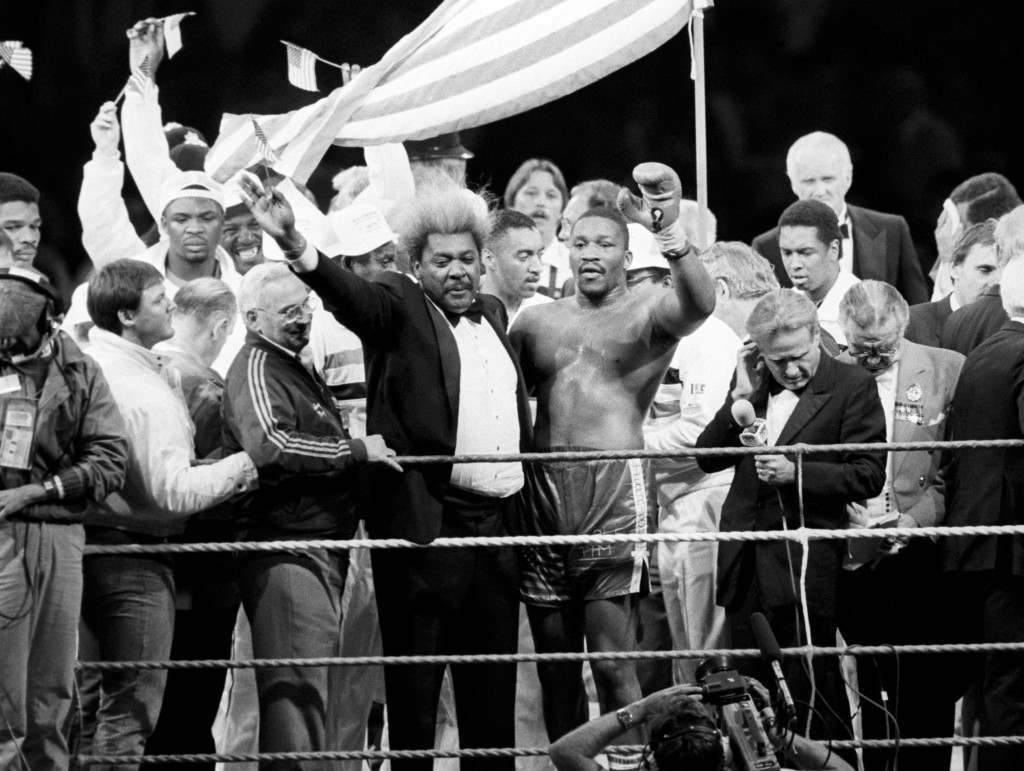 Bugner was everything that Bruno was not, especially in the popularity stakes. The Hungarian-born fighter had hardly endeared himself to the hearts of the British public, by controversially defeating Henry Cooper in what turned out to be Cooper’s last ever bout in 1971. 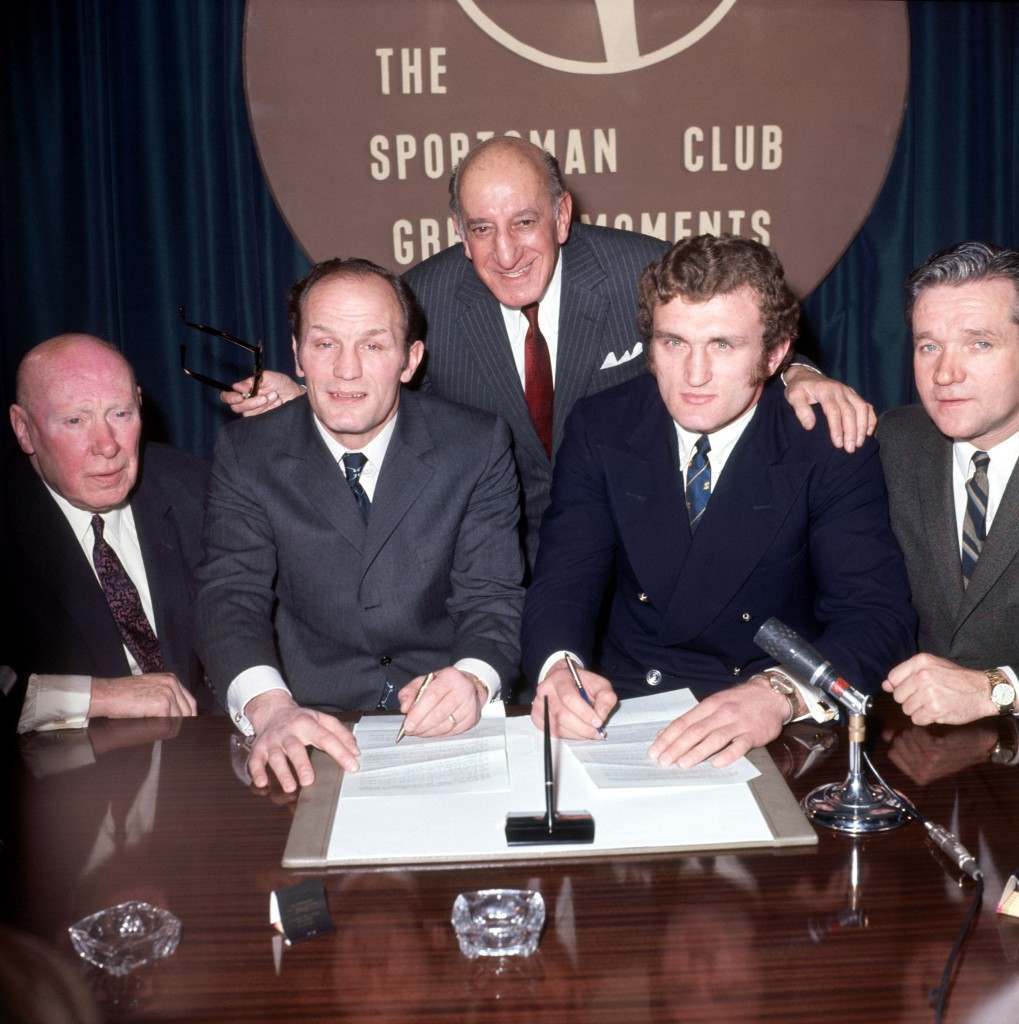 Defeating our ‘Enry on a hotly disputed points decision was tantamount to mooning at the Queen during the recent jubilee celebrations. “I never wanted to be the man who ended Henry’s career. I had no idea that was to be his last fight” Bugner commented in 2008. “What happened to me after that fight was worse than being crucified. Even the Kray twins got a better press. I was blamed for something I had no control over and one moronic Labour MP even called for me to be stripped of my title, stripped of my assets and sent back to wherever I came from. I was a 21-year-old kid and my mind was totally f****d after that. I had another 20 fights in England after beating Henry and the reaction from the crowd was bloody painful every time. In the end, I was chased out of my own country.” 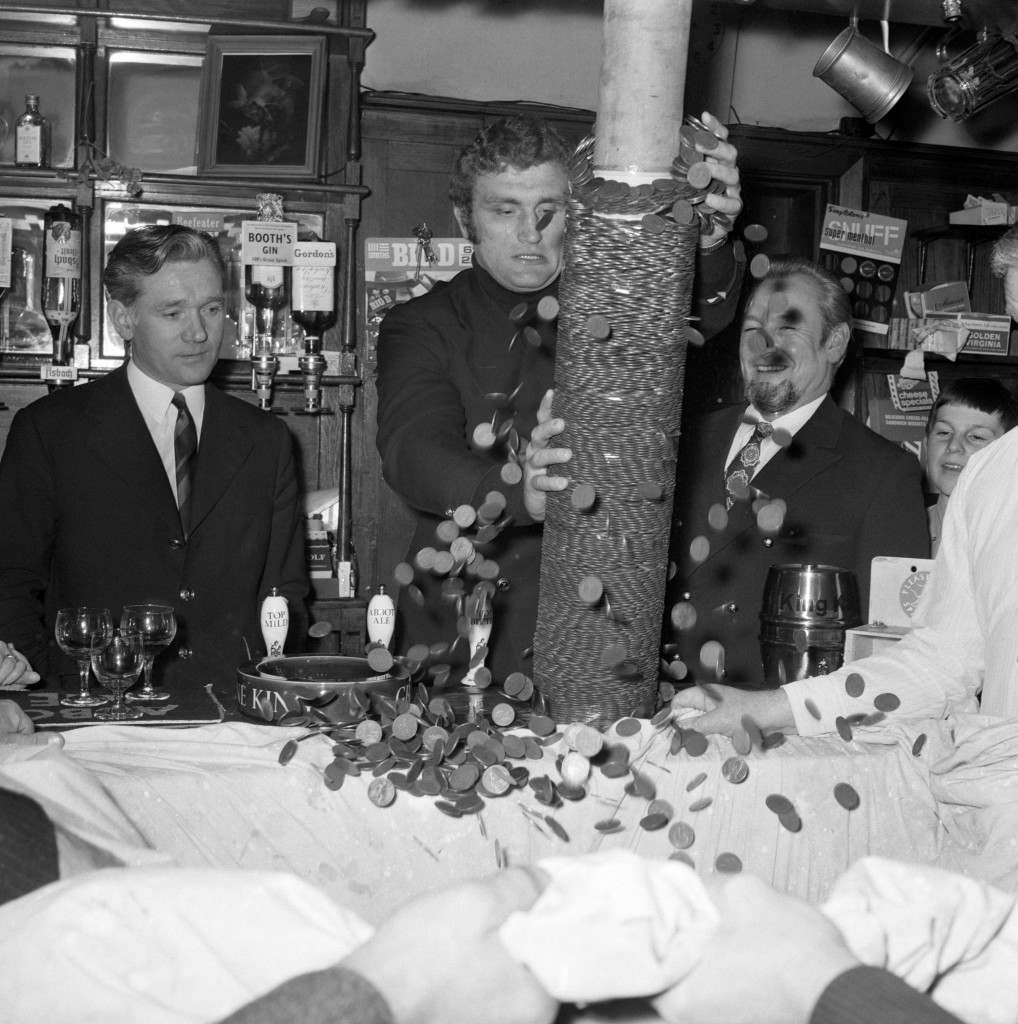 Boxing – The Penny Pushover – The Bull, London Road, Bedford
Heavyweight boxer Joe Bugner, who is due to fight champion Henry Cooper, pushes over a stack of old pennies in the Bull pub in Bedford. The pennies were piled up by customers in aid of the National Kidney Research Fund. (l-r) Andy Smith (Joe’s manager), Joe Bugner and Publican Gordon Lee.
Date: 16/02/1971 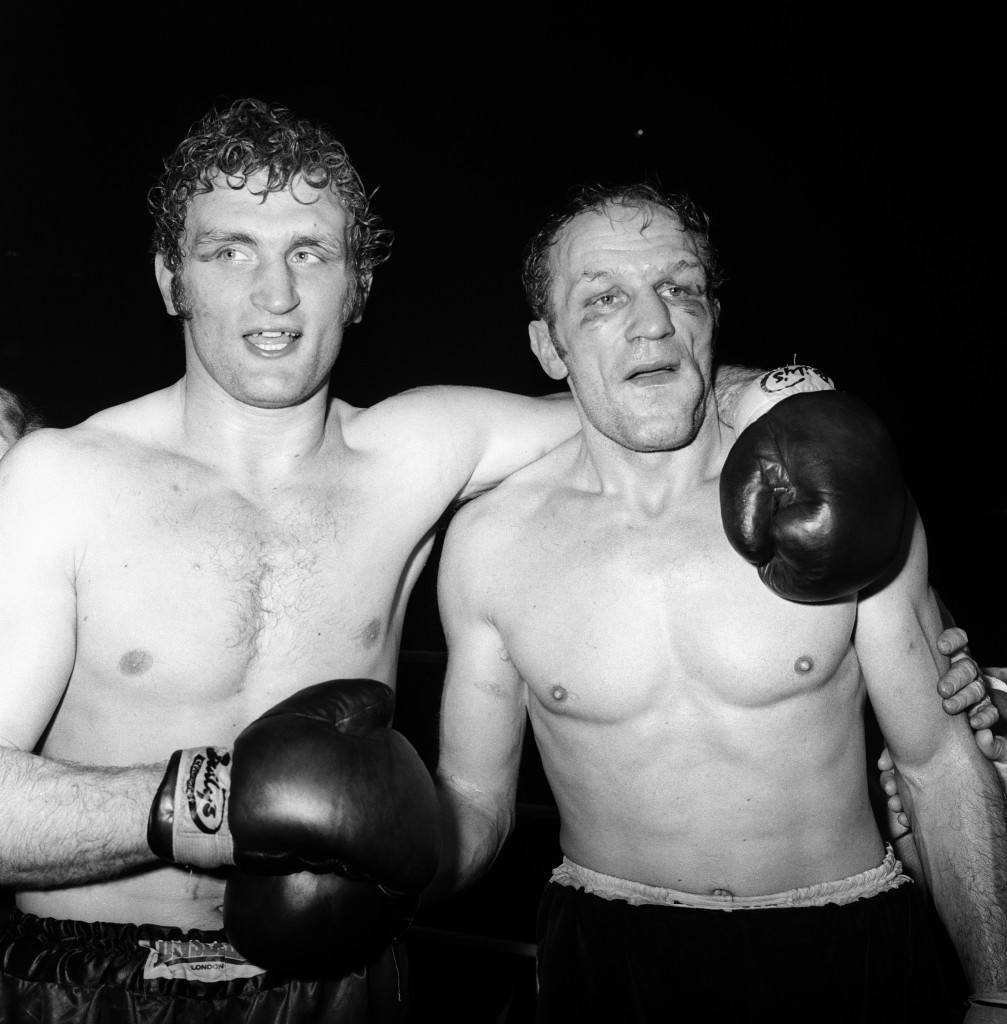 An awesome evening for Joe Bugner, left, who expresses affection for Henry Cooper by placing an arm around him, after he beat him at the Empire Pool on points. Challenger Joe is now the Heavyweight Champion of Great Britain, Europe and the Commonwealth.
Date: 16/03/1971

In subsequent years, Bugner would establish himself as a decent heavyweight, losing to Ali in a shot at the world title in 1975. 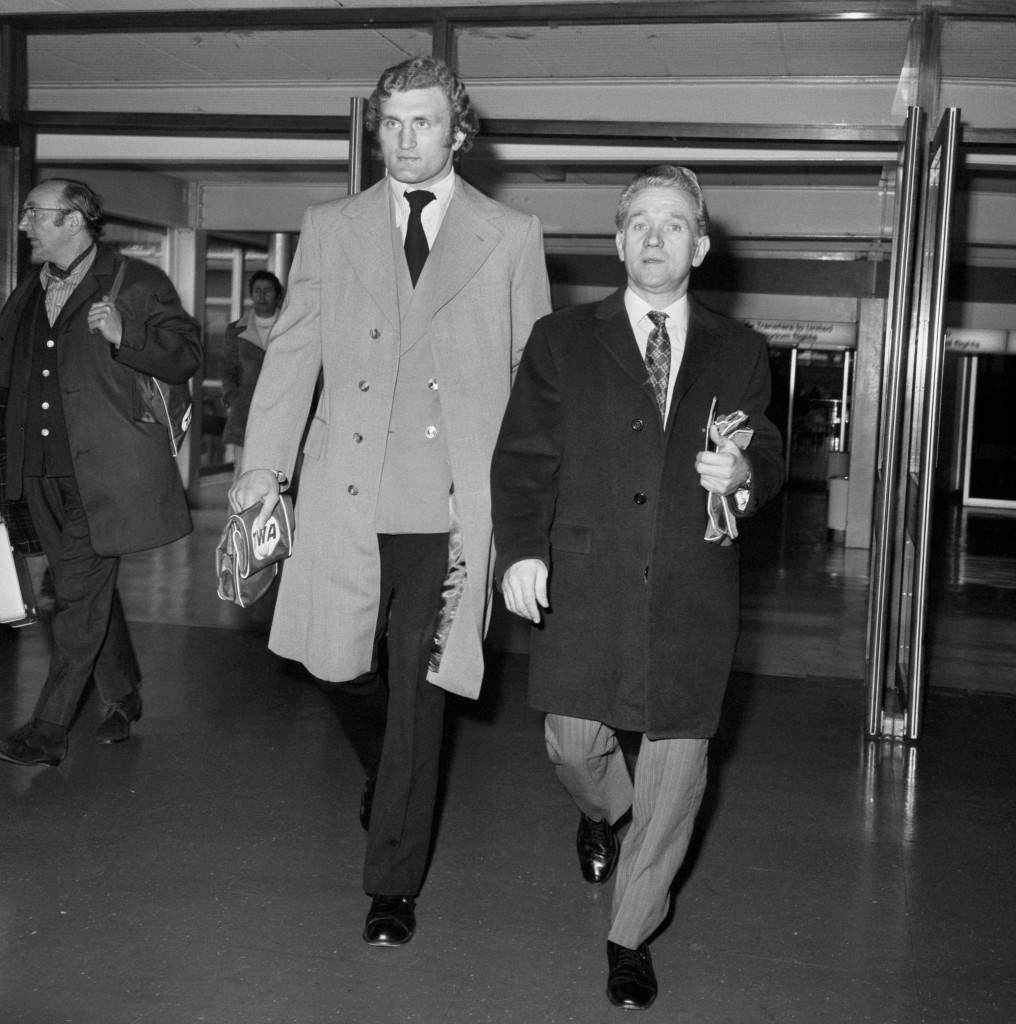 British heavyweight Joe Bugner (l) and his manager Andy Smith (r) at Heathrow Airport where they will fly out to America to meet Muhammad Ali. That fight did take place with Muhammad Ali winning on points after 12 rounds.

Bugner was 22 when he gounf Ali for the first time. Elvis was in the room:

Elvis Presley had presented The Greatest with a magnificent bejewelled robe with the words ‘People’s Choice’ spelt out in gemstones on the back.

Elvis was performing at the Las Vegas Hilton and before the fight he invited about 50 or so people to his hotel suite for a party.

“I thought I’d be very complimentary to him,” recalled Bugner. “I said, ‘Excuse me, Elvis that’s a beautiful robe you gave Ali. I’d love one like that because, as you know I’m also a champion.’ But Elvis turned around and said, ‘You’re no champion’ just like that. I told him to get stuffed and I walked out.

“His bodyguard, a guy they called Big Red, came over and said, ‘Hey man whatya doin … no one speaks to the King like that.’ I replied, ‘Mate, you tell Elvis he’s a d***head.’ Mind you I still listen to him in the car!” 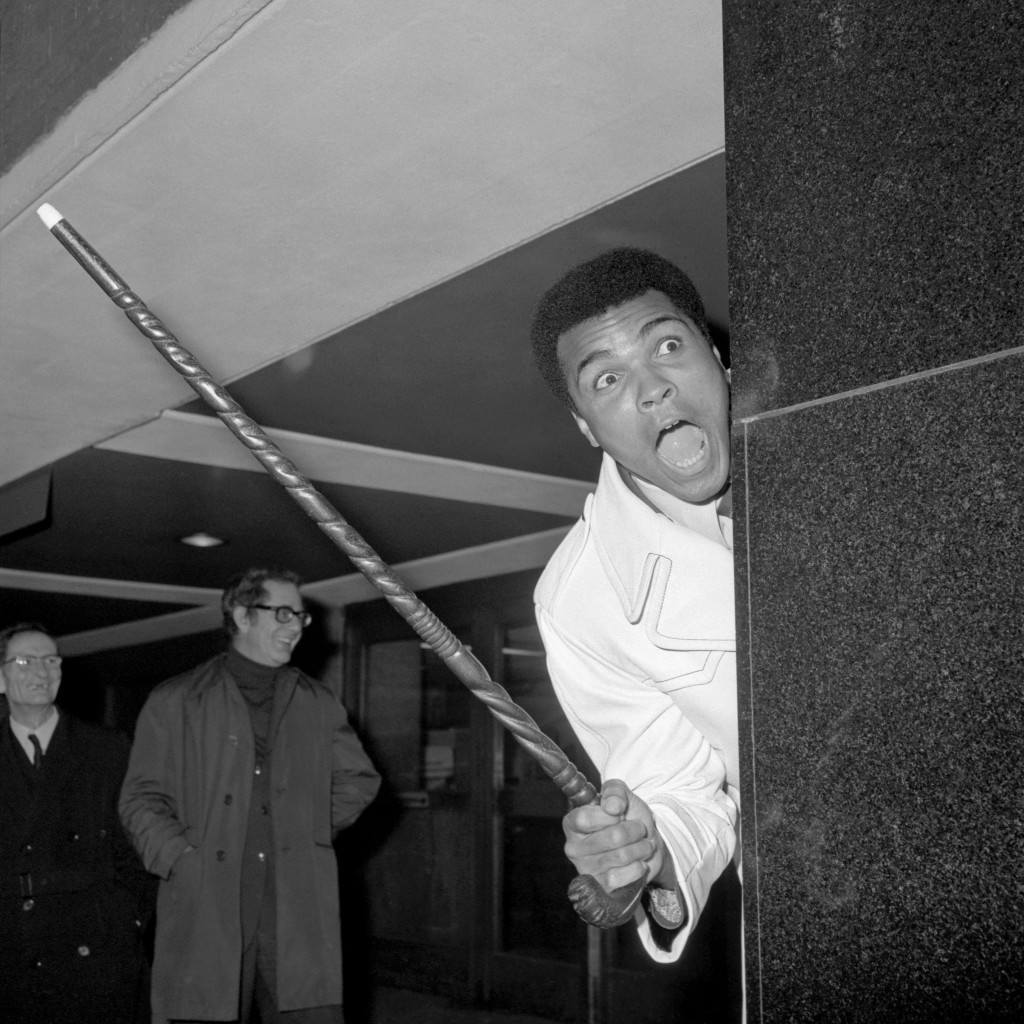 Muhammad Ali looks round at the welcome he receives at Heathrow Airport. He is in London to see the fight between Joe Bugner and Santiago Alberto Lovell at the Royal Albert Hall.
Date: 29/11/1974

But the British public didn’t forgive or forget easily, and Bugner’s defeat of Cooper still rankled, although it seems harsh to blame a man who, after all, didn’t decide who the fight should be awarded to. 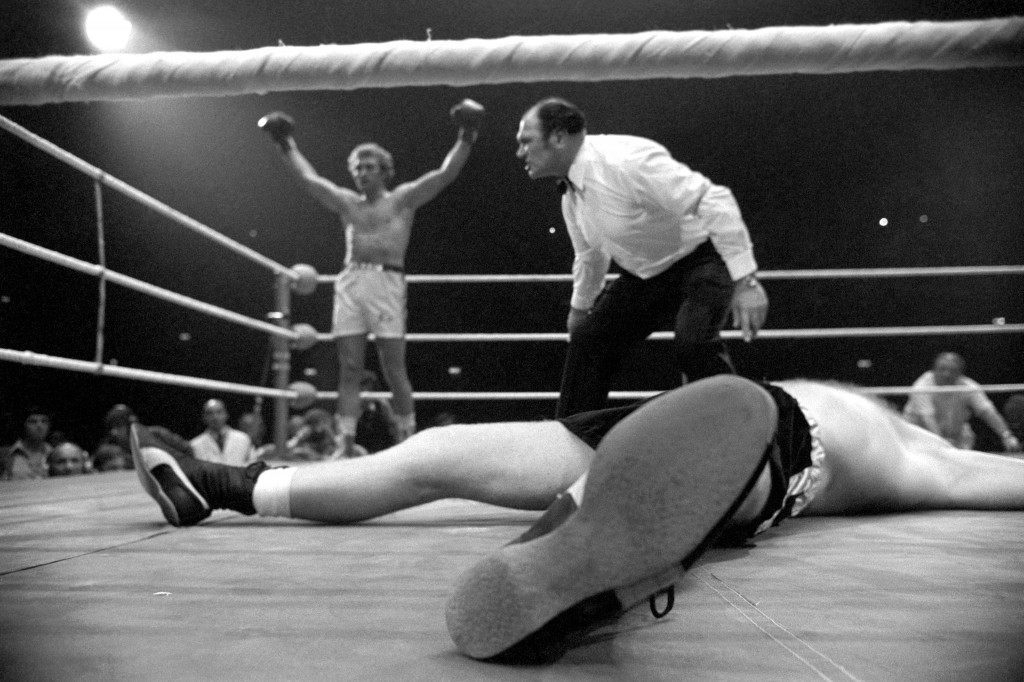 However, in recent years, Bugner had made yet another comeback, beating Jame Tillis, David Bey and Greg Page within a year, and he was starting to move back up the world rankings. 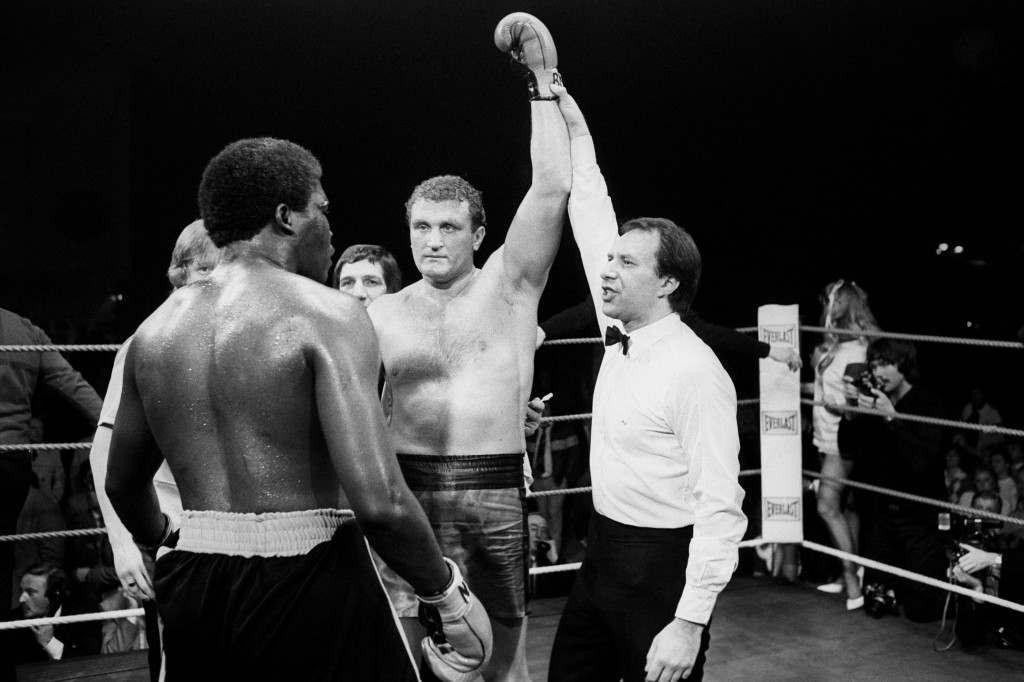 Bugner news was back. 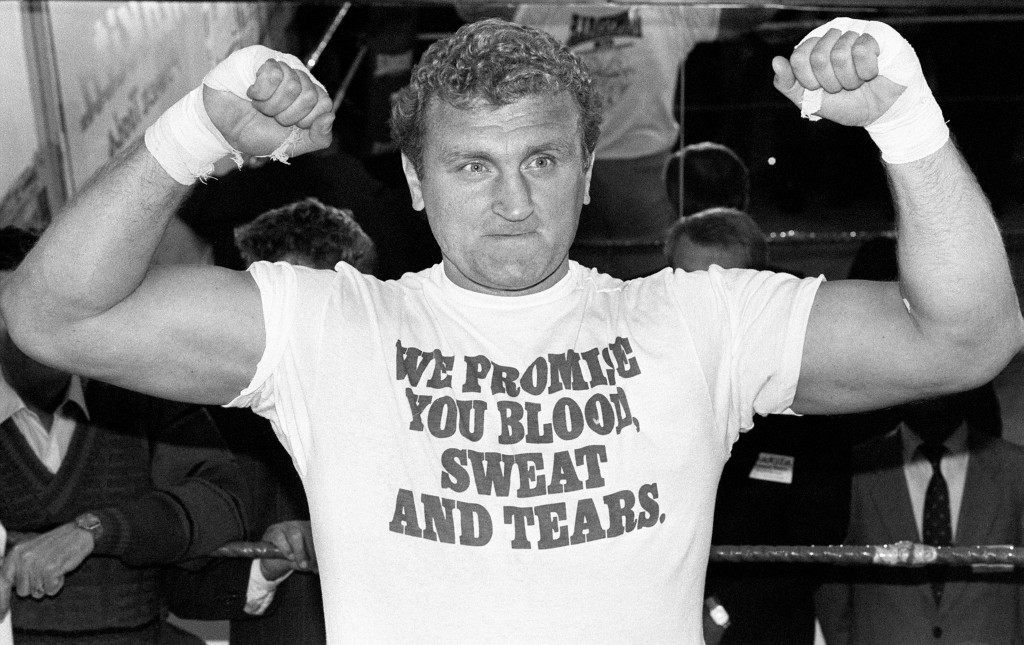 Joe Bugner before his 1987 fight against Frank Bruno. Bugner

Vital Boxing takes up the tale:

Bruno had been lined up to face Trevor Berbeck, at Wembley, but an injury to his potential opponent put pad to that fight. With the need to keep active a priority, the wheels were set in motion for a fight to take place… Making a foray into Boxing for the first time, Barry Hearn did the deal that would see the two pugilists go face to face in a contest to be held at White Hart Lane (Tottenham’s ground) on October 24th. 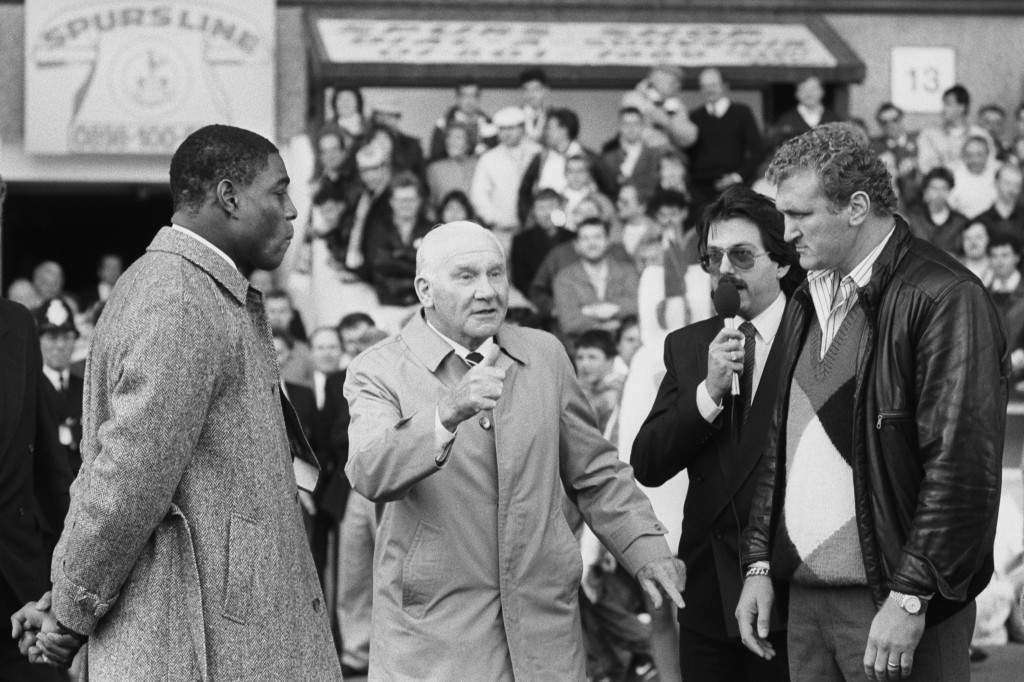 …40,000 crammed into the famous stadium and waited for what was a highly-anticipated bout. Bugner entered the ring in a white gown adorned with the gold and green of his adopted Australia whilst Bruno, resplendent in his familiar red gown, entered the ring to tumultuous cheers with the Union Flag flying high in his corner..

Round eight was to be the pivotal round in the fight, once again Bruno was forcing, in the most professional of ways, the fight and as the end of the round a flurry of punches, accompanied by a push, saw Bugner slump to the canvas. As he arose, Brunorained more punches down on the struggling Bugner and just before the bell sounded his corner threw the towel in, although the official records show that John Coyle, the referee, had stepped in to save Bugner from more punishment. 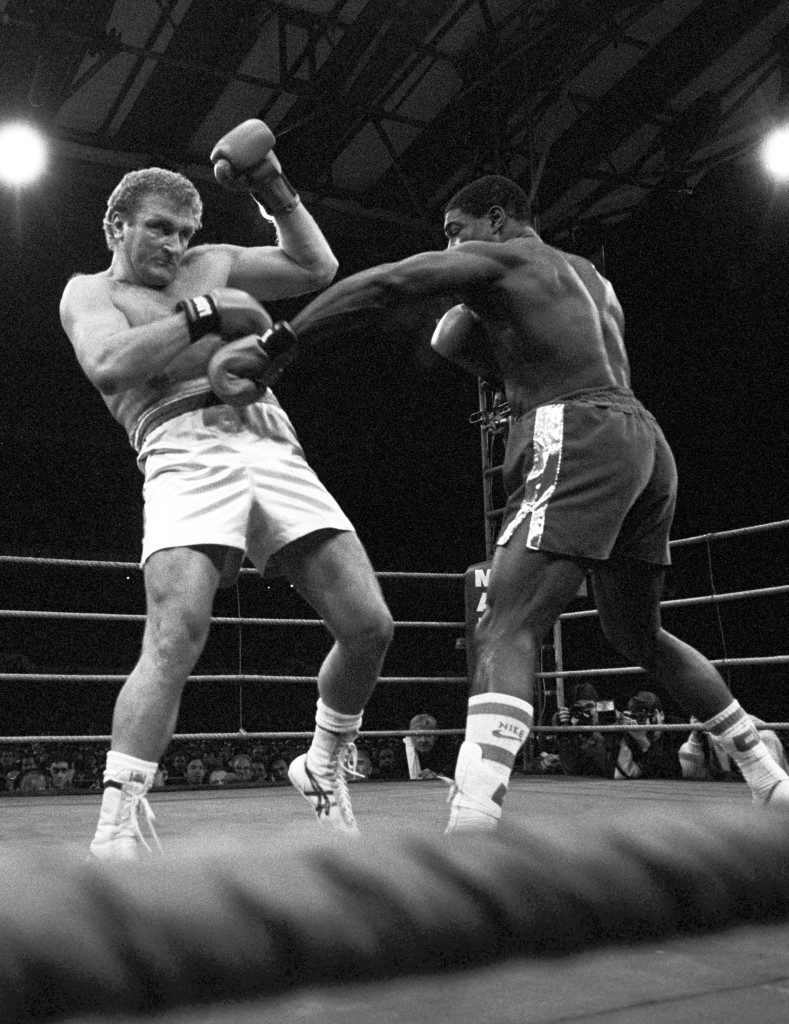 Picture of boxer Joe Bugner (l) in action against Frank Bruno in 1987. Bugner, the former British world heavyweight title contender, has announced he will return to the ring next month at the age of 45.  Date: 23/08/1995

“Bruno’s punch could upset Tyson. He certainly punched harder than I thought he could. I hope he smashes Tyson’s face in…”

Bruno did fight Tyson on February 25, 1989. The British loved him. A nation willed ‘Big Frank’ to win. Game on and Bruno landed a huge punch, Tyson wobbled.

Harry Carpenter didn’t so much commentate and he did cheer for the country’s great hope:

And then Bruno was pulverised.

But that’s another story…