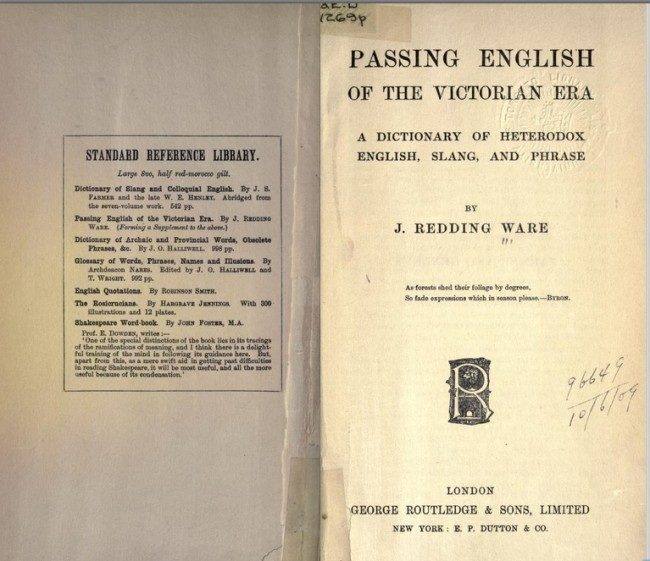 Want top speak like a Victorian? James Redding Ware, the pen name of writer Andrew Forrester, documented slang English terms of that perverted period in British history in his book Passing English of the Victorian era, a dictionary of heterodox English, slang and phrase.

“Thousands of words and phrases in existence in 1870 have drifted away, or changed their forms, or been absorbed, while as many have been added or are being added,” he writes in the book’s introduction. “‘Passing English’ ripples from countless sources, forming a river of new language which has its tide and its ebb, while its current brings down new ideas and carries away those that have dribbled out of fashion.” 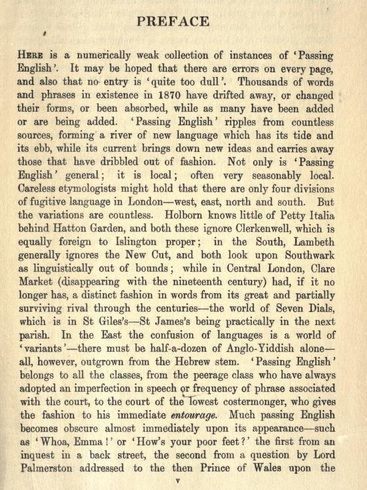 Mental Floss has listed a few:

A society word meaning “smart.” Forrester demonstrates the usage: “The goods are not ‘afternoonified’ enough for me.”

A figure of speech used to describe drunken men. “He’s very arf’arf’an’arf,” Forrester writes, “meaning he has had many ‘arfs,’” or half-pints of booze.

Thieves used this term to indicate that they wanted “to go out the back way.”

An 1850 term for sausages, “because no man but the maker knows what is in them. … The ‘bag’ refers to the gut which contained the chopped meat.”

5. BANG UP TO THE ELEPHANT

This phrase originated in London in 1882, and means “perfect, complete, unapproachable.” 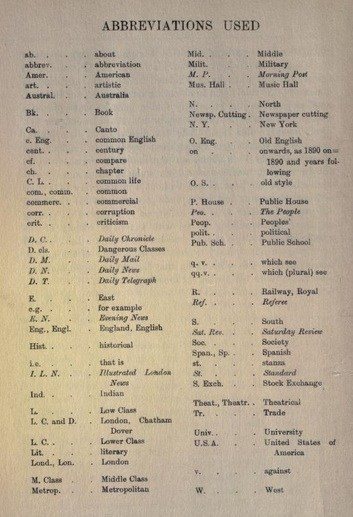 Nineteenth century sailor slang for “A riotous holiday, a noisy day in the streets.”

A naval term referring to meat so bad “it might be dog flesh.”

Brave or fearless. “Adroit after the manner of a brick,” Forrester writes, “said even of the other sex, ‘What a bricky girl she is.’”

A verbal attack, generally made via the press. Forrester cites The Golden Butterfly: “I will back a first-class British subject for bubbling around against all humanity.”

Extravagance. Too much extravagance. “Are you going to put lace over the feather, isn’t that rather butter upon bacon?”

A London society term for tea and coffee “used scornfully by drinkers of beer and strong waters … in club-life is one of the more ignominious names given to champagne by men who prefer stronger liquors.”

A nickname given to a close friend.

Quarrels. A term from Queen Victoria’s journal, More Leaves, published in 1884: “At five minutes to eleven rode off with Beatrice, good Sharp going with us, and having occasional collie shangles (a Scottish word for quarrels or rows, but taken from fights between dogs) with collies when we came near cottages.”

To get a black eye. “Cop in this sense is to catch or suffer,” Forrester writers, “while the colour of the obligation at its worst suggests the colour and size of the innocent animal named.”

A delightful way to refer to your rather boring hands.

This creative cuss is a contraction of “damned if I know.”

A phrase meaning “elderly,” because it “makes the spectator giddy to think of the victim’s years.” The term is usually refers to “a maiden or other woman canvassed by other maiden ladies or others.” 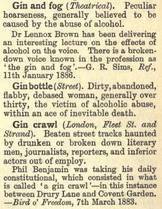 Popular until 1870, this phrase meant “Don’t lie to me!” Apparently, people who sold dogs back in the day were prone to trying to pass off mutts as purebreds.

A type of beard “formed by the cheeks and chin being shaved leaving a chain of hair under the chin, and upon each side of mouth forming with moustache something like a door-knocker.”

“Satirical reference to enthusiasm.” Created by Braham the terror, whoever that is.

Not the game you might be familiar with, but a term meaning complete and absolute confusion.

A term for especially tight pants.

Use of this 1880 phrase indicated temporary melancholy.

An excellent word that means getting rowdy in the streets. 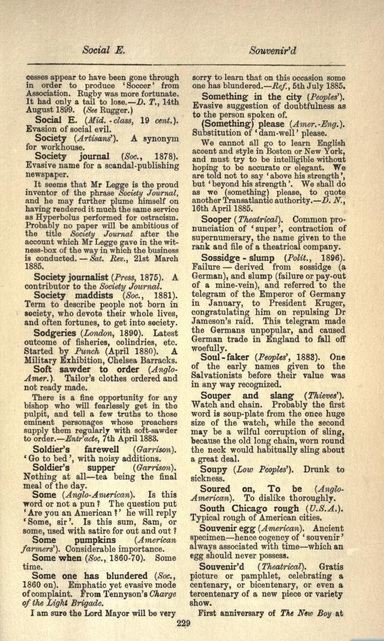 When walking or otherwise getting around, you could ask people to let you pass, please. Or you could ask them to mind the grease, which meant the same thing to Victorians.

This 1883 term for a policeman is so much better than “pig.”

Someone who takes a day trip to the beach. He brings his own provisions and doesn’t contribute at all to the resort he’s visiting.

This term, Forrester writers, describes a person with a “wilful determination to ignore the objectionable or inconvenient, at the same time assuming airs of superior virtue and noble resignation.”

An 18th century tavern term that means “getting drunk.”

50. SHOOT INTO THE BROWN

To fail. According to Forrester, “The phrase takes its rise from rifle practice, where the queer shot misses the black and white target altogether, and shoots into the brown i.e., the earth butt.”

Drinking a glass of absinthe neat; named for the green color of the booze.

According to Forrester, this low class phrase means “thoroughly understood.”

A term meaning “inferior, noisy singers” that could be used liberally today during karaoke sessions. 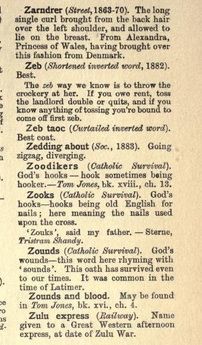 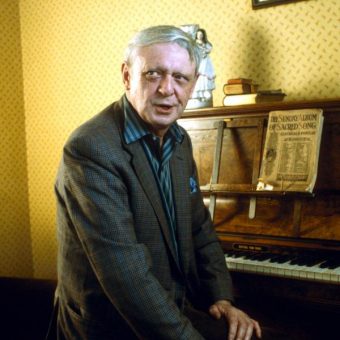