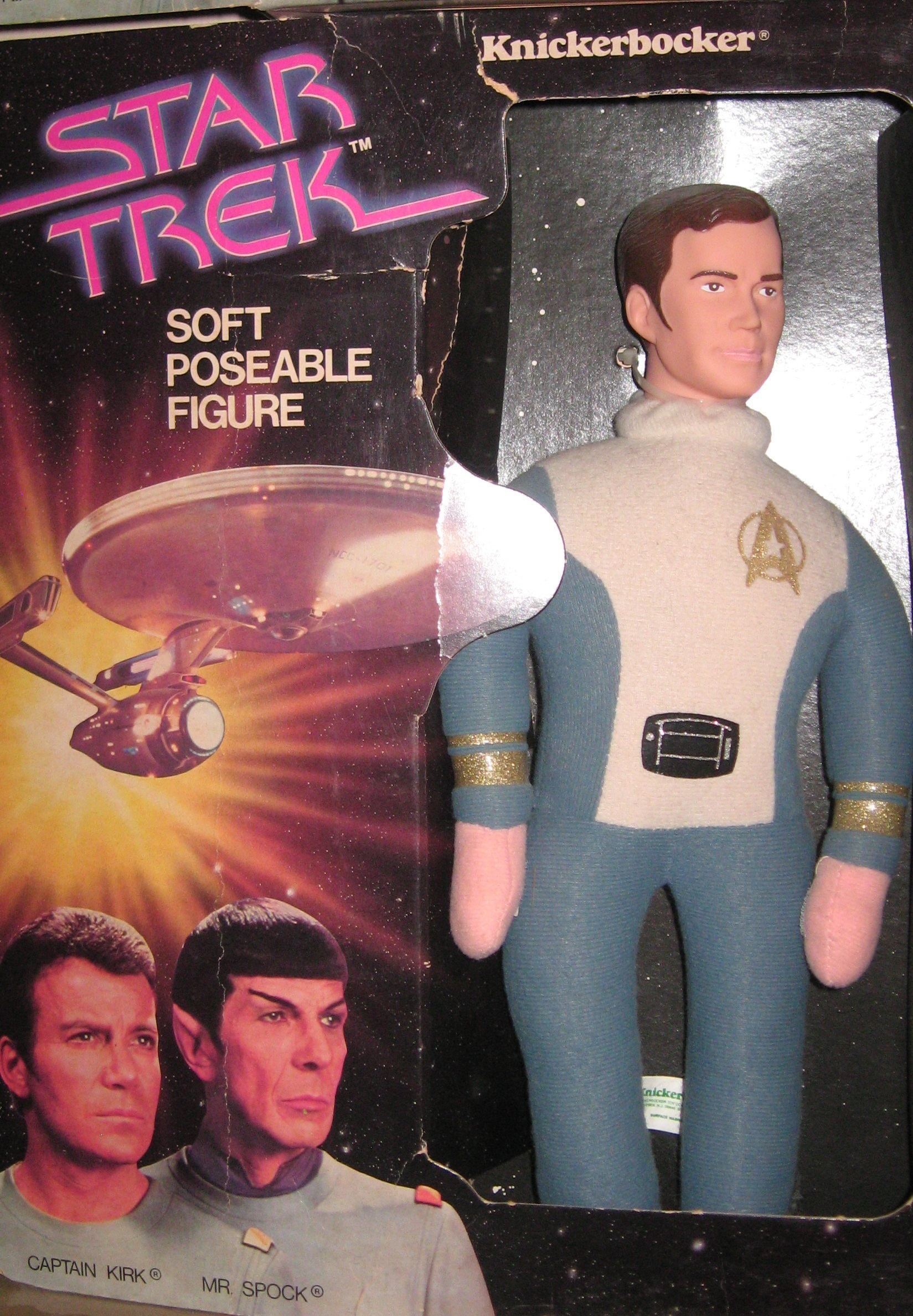 Star Trek has been around, and popular, for nearly a half-century at this point.  In fact, this week marks the franchise’s 49th anniversary. In honor of that anniversary on September 8th, I thought i might be fun to take a look at some of the strange collectibles carrying the series name.

Here is a brief sampling of some of the weirder, mass-produced Star Trek merchandise that was once widely available. 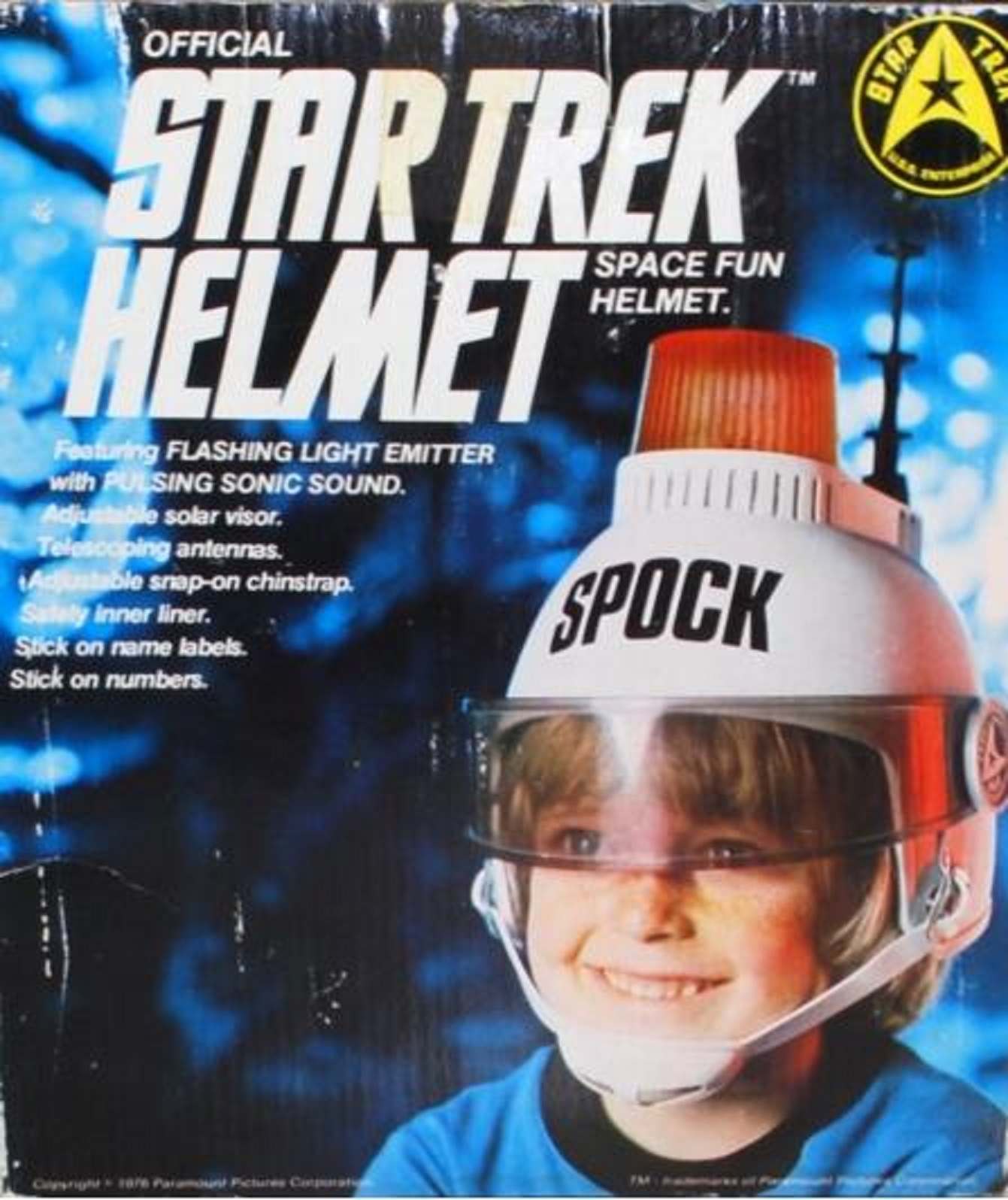 I covered these toys not long ago for my look back at toy space helmets.  But these toys from Remco are the absolute pits.

The Spock helmet is a travesty, and the astro-helmet pictured here (with cap rifle) resembles nothing seen on the series.  These oddball helmets are clearly from the school of “slap a brand name on it” toys that no kid would want if it didn’t happen to be named after Star Trek.  Today at least, these toys are curiosities, and nostalgic… 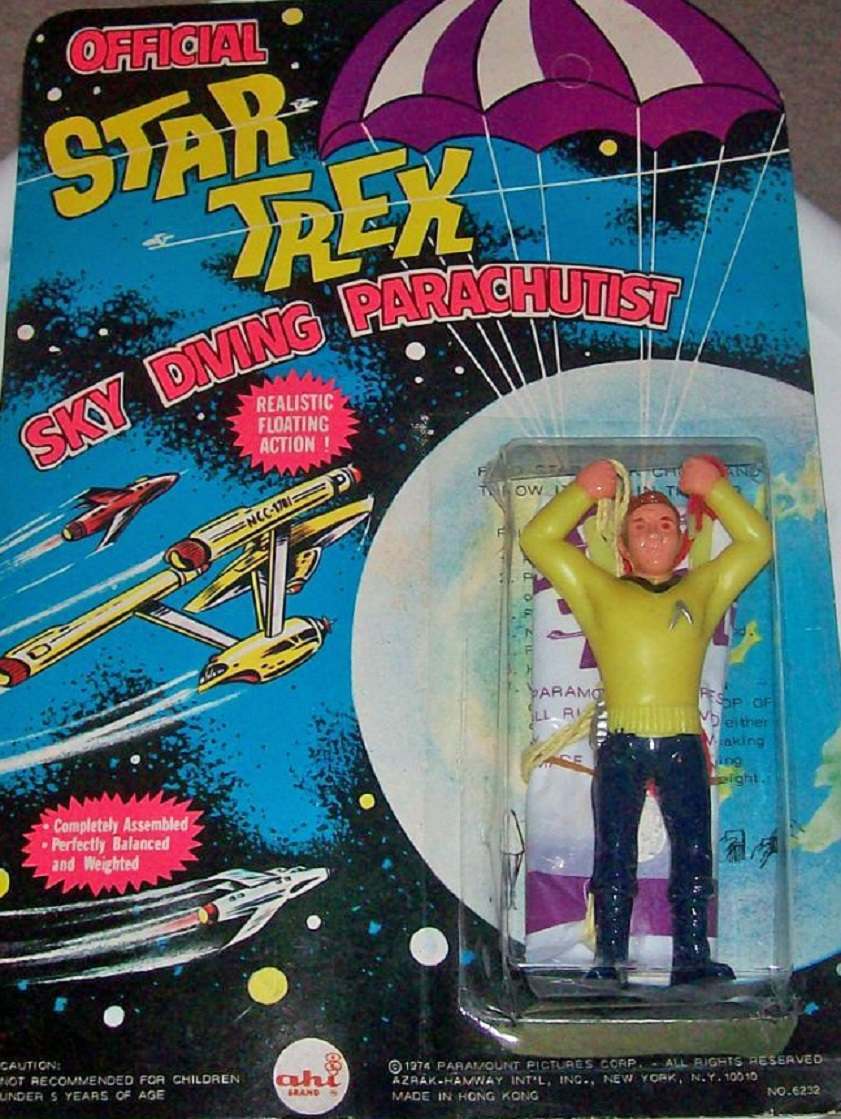 Until the J.J. Abrams re-boot in 2009, Mr. Spock and Captain Kirk had little need for parachutes.  But in 1976, Ahi released rubbery figures of both characters who could be tossed into the air, and then glide down to Earth.

For use, apparently, when the transporter was broken. 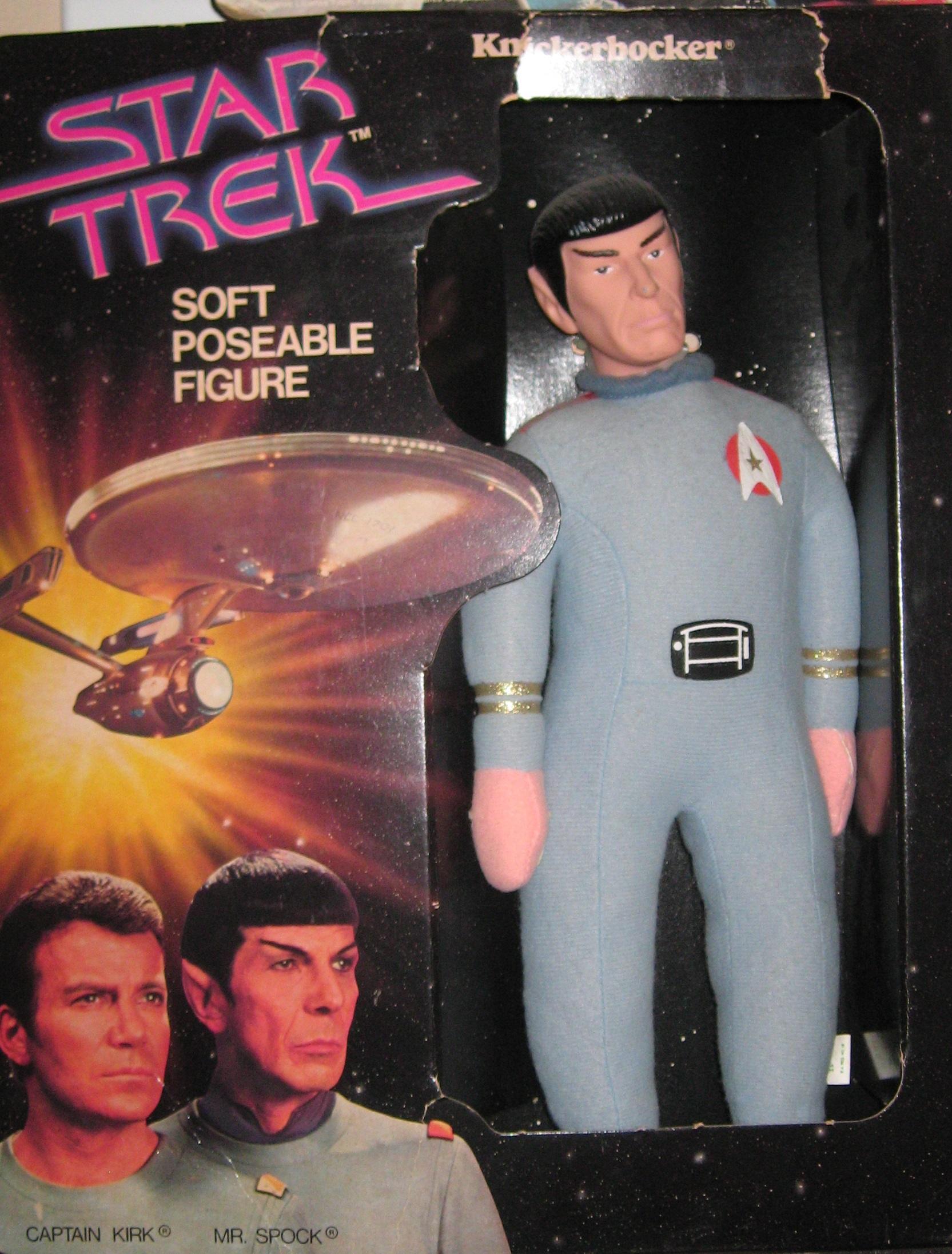 Some kids face the perils of night-time with cuddly Teddy Bears. Other kids do so with starship captains and Vulcan science officers.  Set phasers to stun.  Target: the monster in the closet.

As you can see from the photos in this piece, Knickerbocker released 13-inch tall Captain Kirk (No. 0599) and Mr. Spock (No. 0598) “soft” figures in their Star Trek: The Motion Picture-styled Starfleet uniforms.

You read that right.  These are plush, cuddly versions of the characters portrayed by William Shatner and Leonard Nimoy.

Now, don’t you want your kid cuddling that?

Seriously, I can understand wanting Star Trek action-figures to play with, but I can’t imagine little ones wanting Captain Kirk of Mr. Spock as a huggable security blanket, can you? 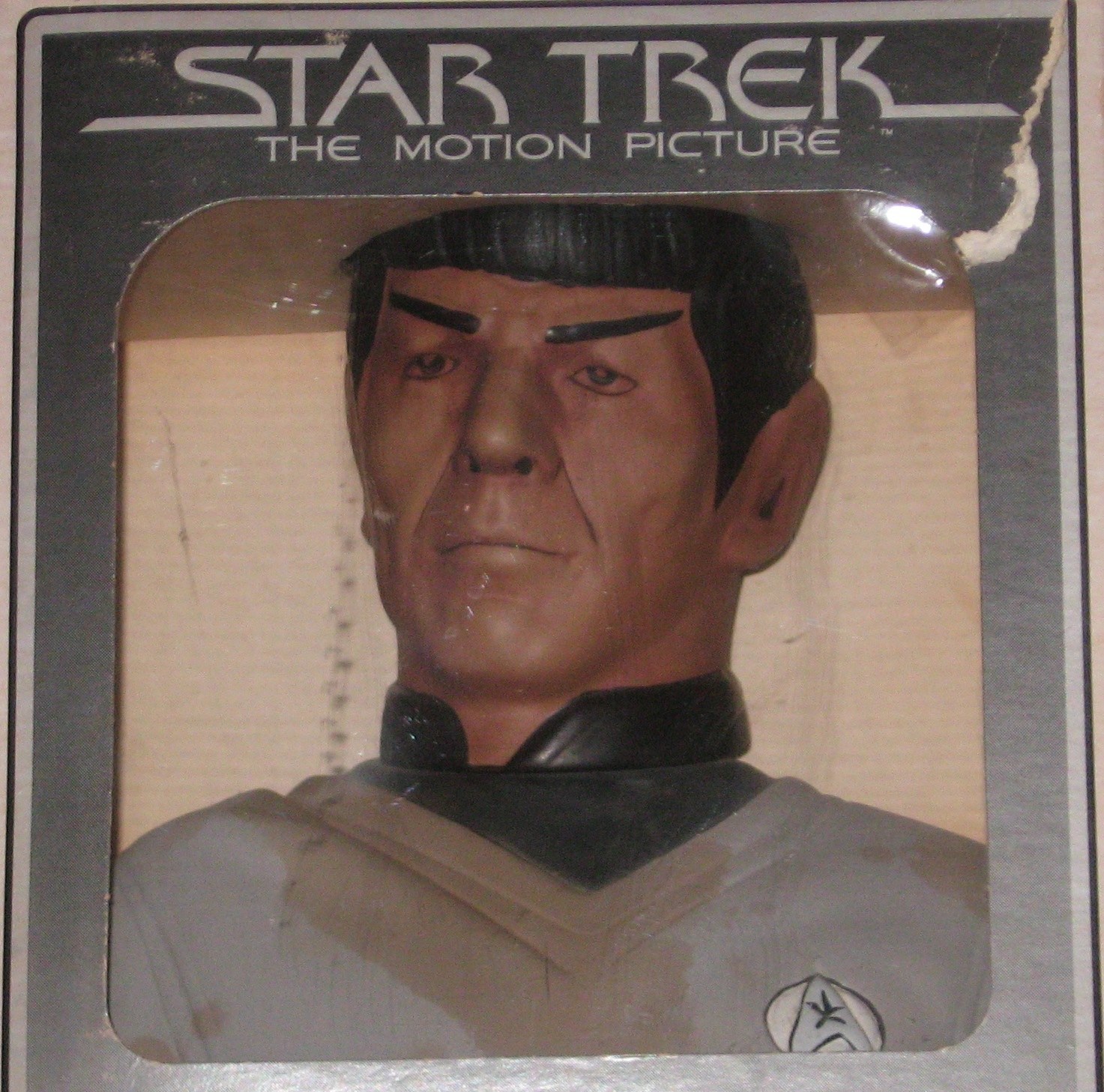 To celebrate the release of Star Trek: The Motion Picture on December 7, 1979, the Grenadier Spirits Company unveiled this unusual franchise collectible, a “beautifully handcrafted ceramic bust” of the logical Mr. Spock.

According to the packaging, this Grenadier Original “has captured in each hand-painted figurine the uncanny likeness of our favorite Vulcan using only the finest quality porcelain.”

And if that’s not enough, each Mr. Spock decanter is filled with “Cielo” Liqueur, and, according to the back of the box “will be an eye-catching addition for every fan’s showcase.” The Cielo is 48 proof, in case you wondered, and there’s 750 ml of it for imbibing.

Romulan Ale or Tranya would have been more appropriate… 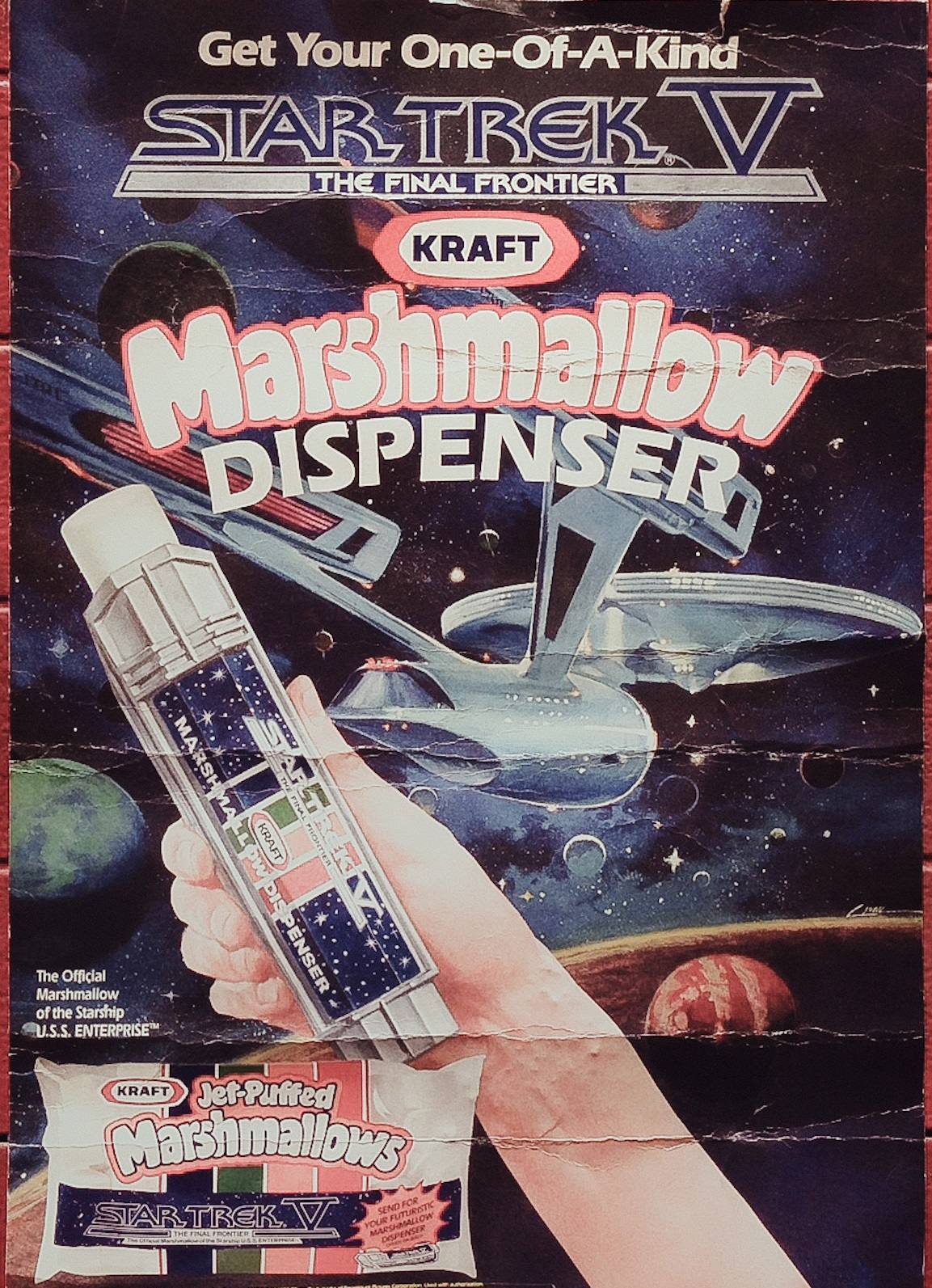 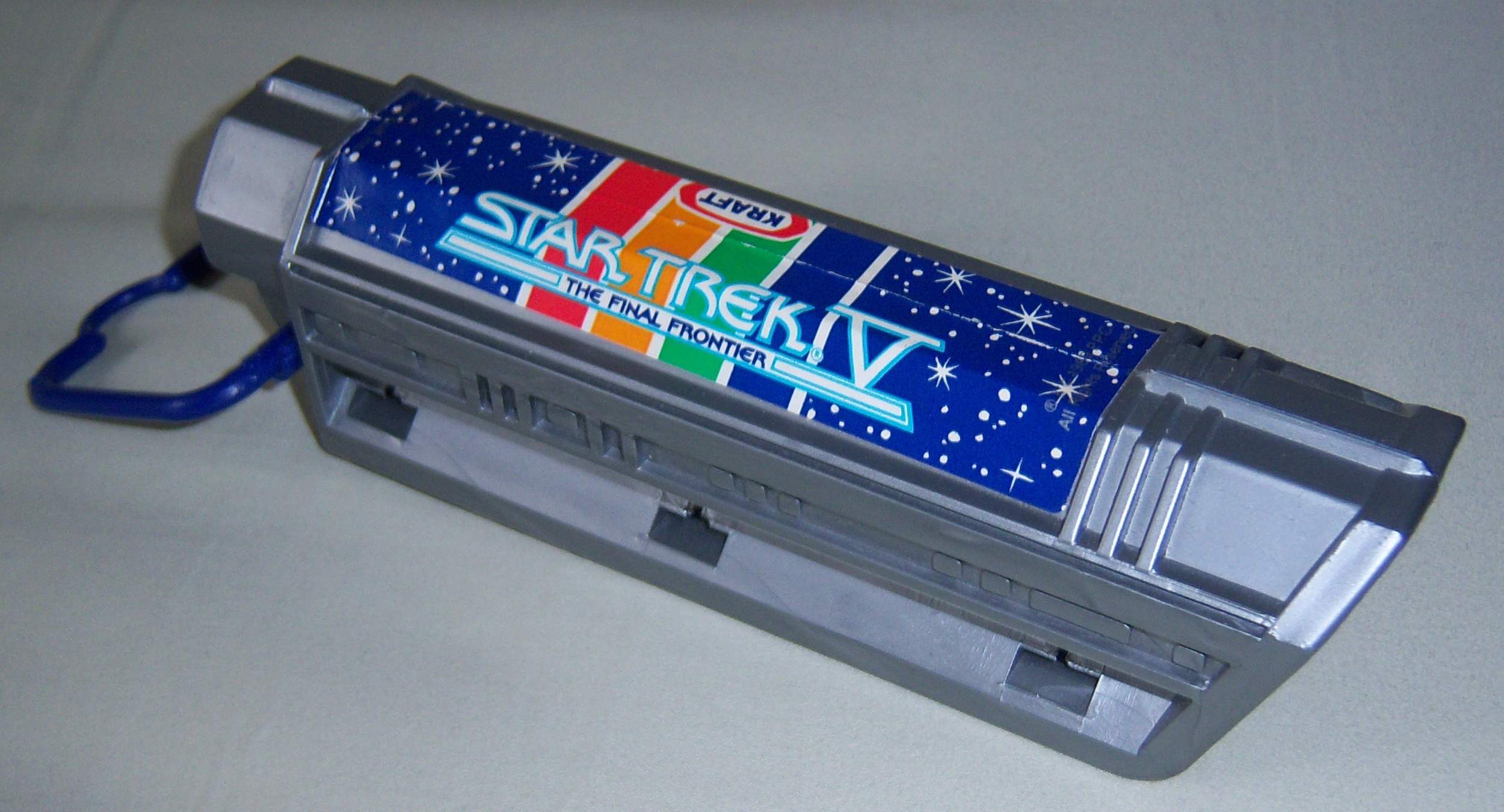 Well, at least this collectible is based on something that actually appeared in the franchise.  In 1989’s  Star Trek V: Final Frontier, as you may recall, Mr. Spock attempts to toast a “marsh-melon” while camping out in Yosemite with Captain Kirk and Dr. McCoy. To facilitate that process, he uses a 23rd century mini-replicator device, or marshmallow dispenser.

If you bought one of Kraft’s replicas, you could sit around the camp-fire, sing row, row, row your boat, and wonder what on Earth had happened to your favorite space adventure franchise. 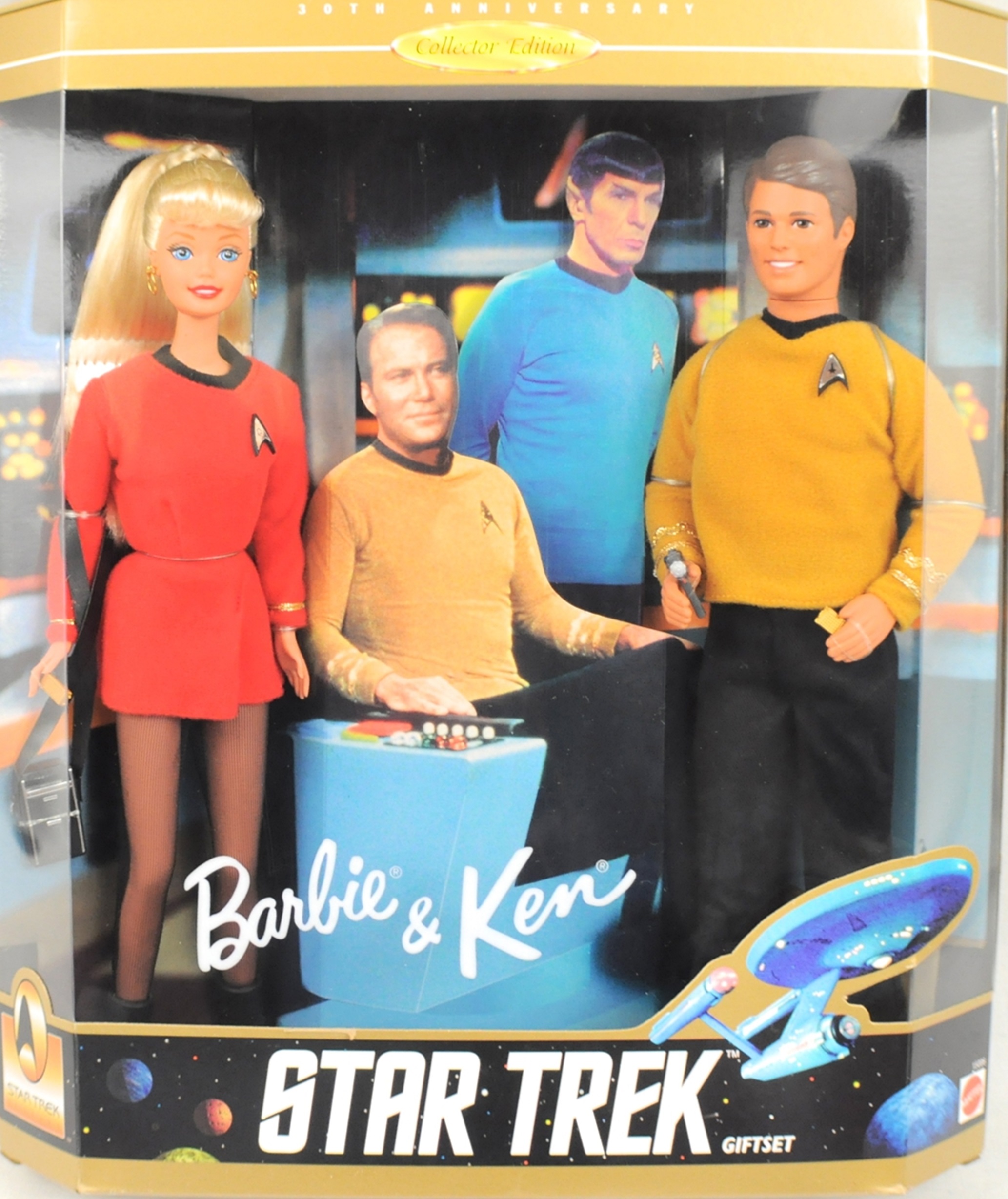 To celebrate the thirtieth anniversary of Star Trek, Mattel manufactured this odd genre crossover, the Barbie & Ken Star Trek Gift Set. This oversized “collector’s edition” toy includes our man Ken in gold command uniform, and Barbie in red yeoman’s uniform, replete with sixties hoop earrings and a Yeoman Rand-worthy hair-style.
This Mattel toy features an interesting word to the wise in the lower corner of the box rear. Not just that “Barbie doll cannot stand alone” (does that mean she needs Ken after all?), but that “Space instruments are non-working.” In other words, the nicely detailed tricorder, phaser and communicator that accompany this set don’t actually operate.  Was anyone expecting them to?

Also, think about gender representation and equality as it applies to these particular dolls. Even in her own franchise, Rand has to be the lowly yeoman while the boyfriend gets to be the starship captain?  Why couldn’t Barbie be dressed as Captain Kirk, and Ken be Spock?  Even in her own doll line, Barbie had was low person on the totem pole.

If none of these original series collectibles float your boat for weird Trek merchandise, you can always go for the Star Trek: The Next Generation Dinner Ware collection.  Perfect for fancy dinners! 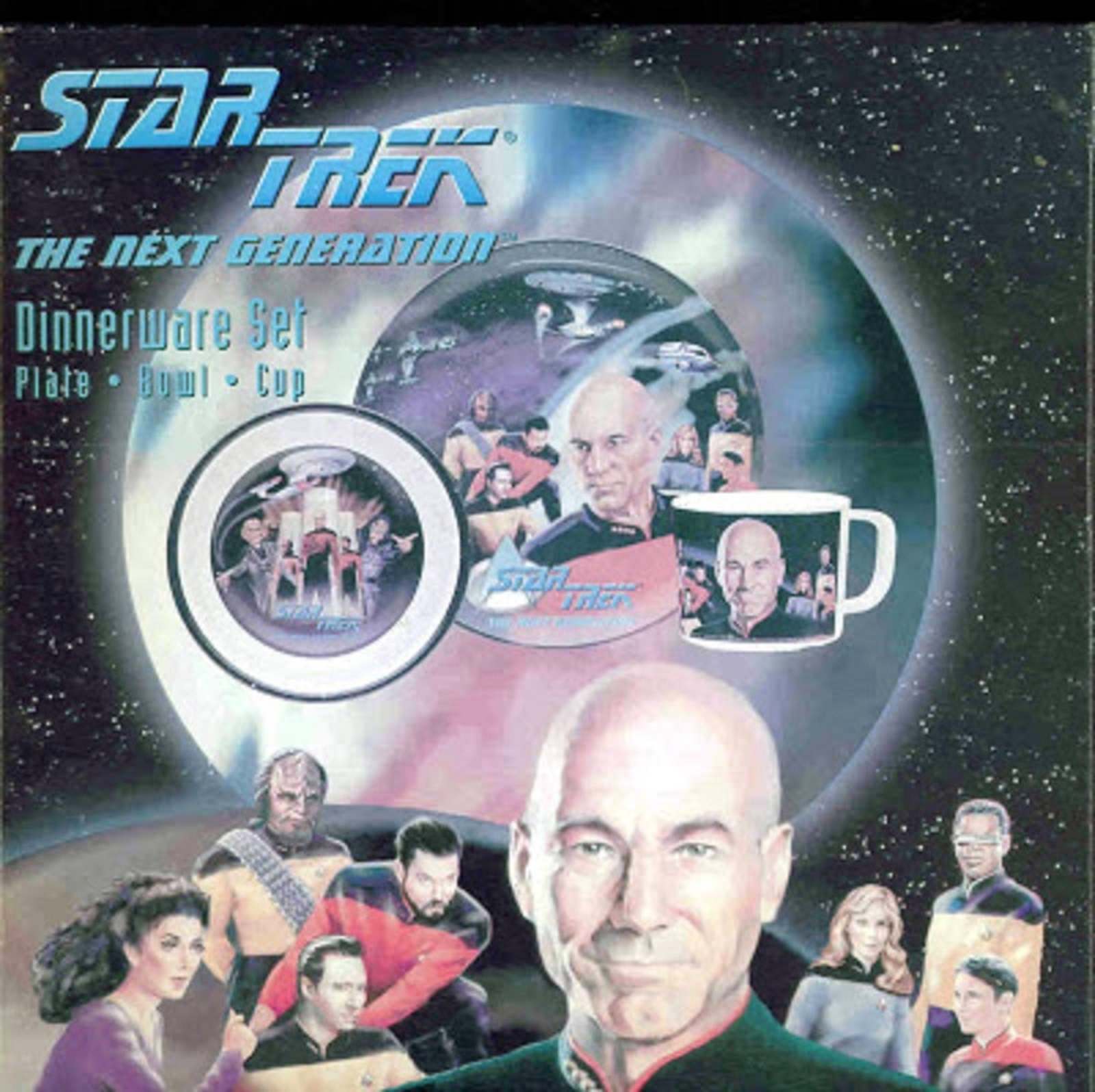