The use of topless fairies started innocently enough in 1893. The White Rock mascot is supposed to be Psyche. Look at any painting of her from the 17th-19th Century and, lo and behold, she’s topless (as these dirty Old Masters were prone to do). No big deal right? Are we so sensitive these days that a figure of antiquity will cause a stir just because she’s not wearing a sweater or denim jacket?

Wait till Madison Avenue gets a hold of it. In advertising, Sex Sells. And if your old school logo features topless fairies, well, by God, we’re going to make the most of it! 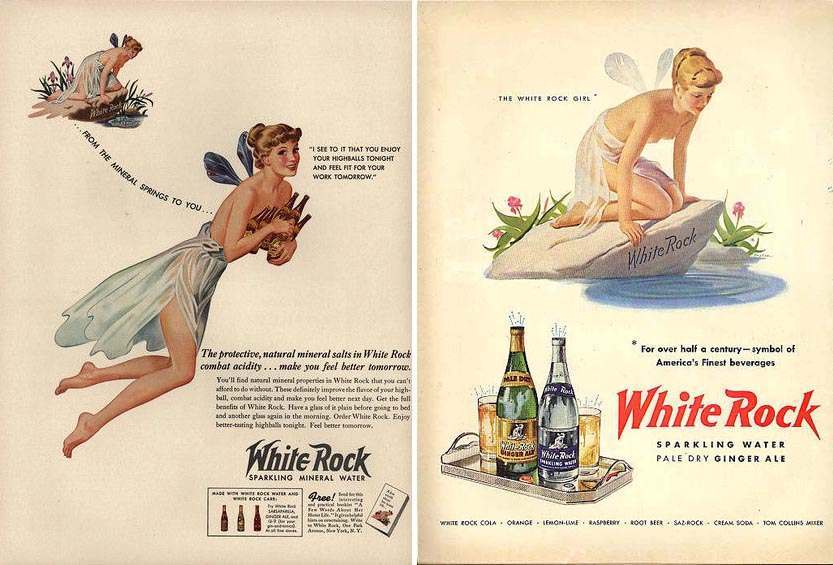 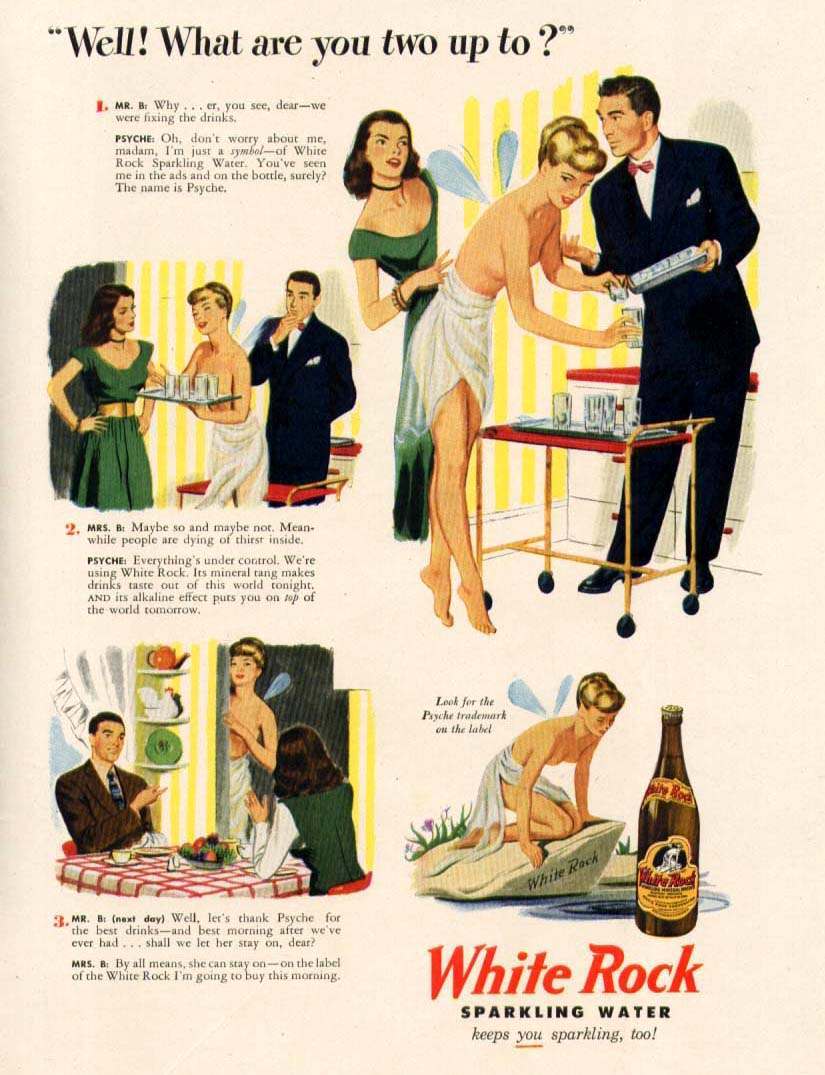 By the 1940s, Psyche looks like a topless Tinkerbell – a far cry from a Baroque oil painting.  Here, she’s serving guests with boobs boldly out, and getting the host in trouble with the wife!

“Oh, don’t worry about me, madam, I’m just a symbol – of White Rock Sparkling Water.  You’ve seen me in the ads and on the bottle, surely? The name is Psyche.”

In other words – Yes, I’m alone with your husband, and I’m topless. But don’t worry.  I’m a spokesperson for a water company.

The wife is clearly not impressed: “Maybe so and maybe not.  Meanwhile people are dying of thirst inside.” 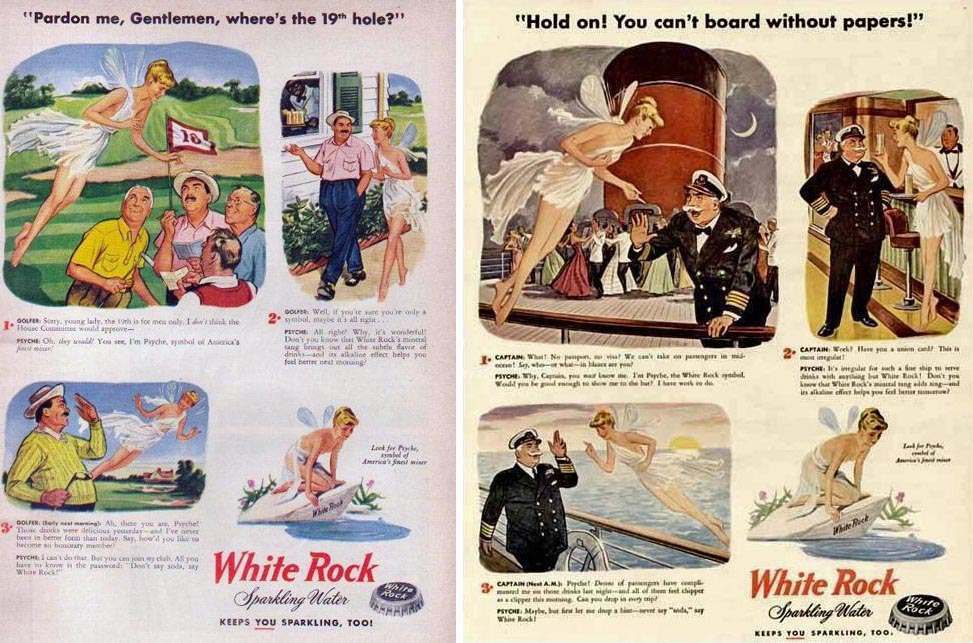 White Rock’s sprite was featured in numerous adverts throughout the first half of the 20th century.  Sometimes, she was covered up by wisps of clothing, but most of the time it was au naturale… 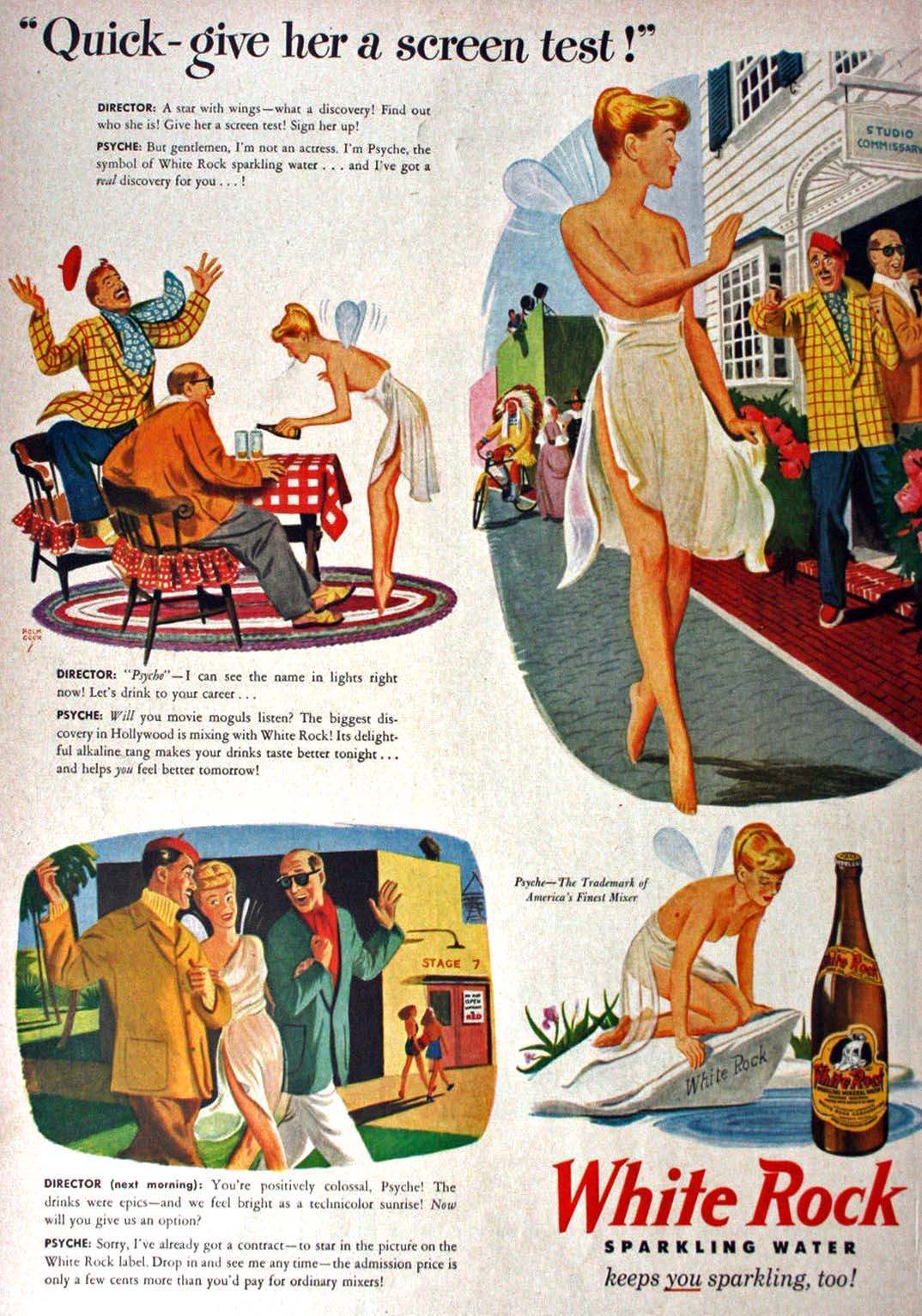 The Hollywood producers are so smitten by the topless nymph, they want to make her a star.    But you’ll notice, Psyche’s nipples are always conveniently covered.  Yes, she’s topless prancing through the studio lot like Lady Godiva, and pouring the men drinks completely bare up top… but, the viewer is never quite privy to the whole view. 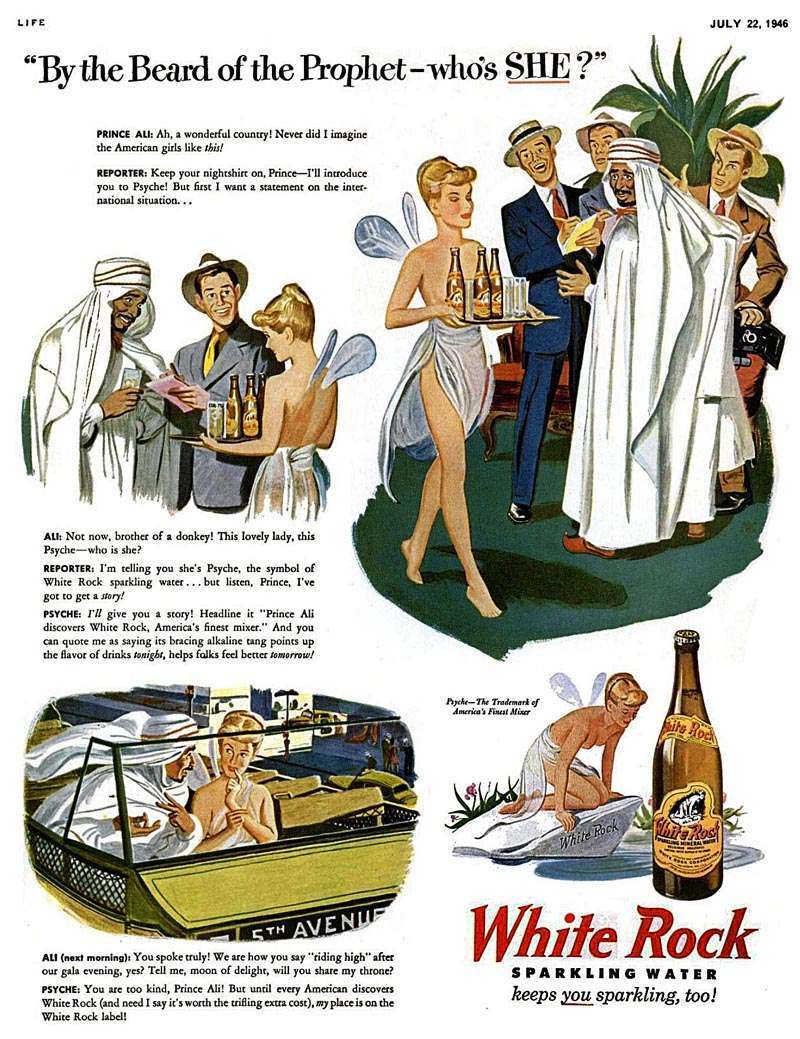 In this one, Psyche delivers drinks completely topless and a visiting sheik is absolutely smitten.  In fact, if you read the whole advert, it seems like maybe Psyche and Ali get down to business that night.  “By the Beard of the Prophet!” 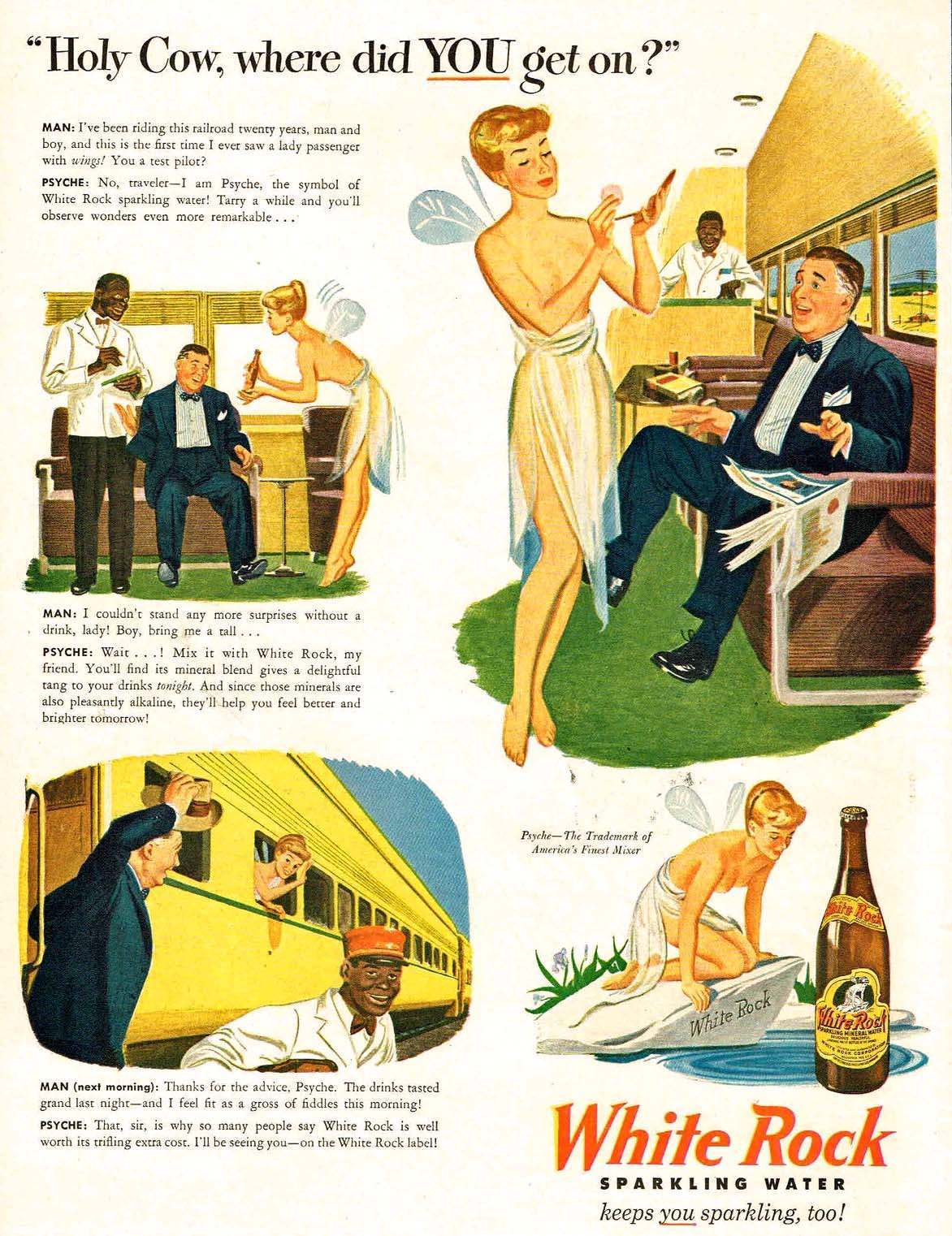 Troubling racial depictions aside, this one’s interesting because we can see why the men are constantly going ga-ga for Psyche – not only is she topless, but her tiny bit of clothing appears to be transparent…. the passengers are indeed getting quite an eyeful of this sparkling water mascot’s goods. 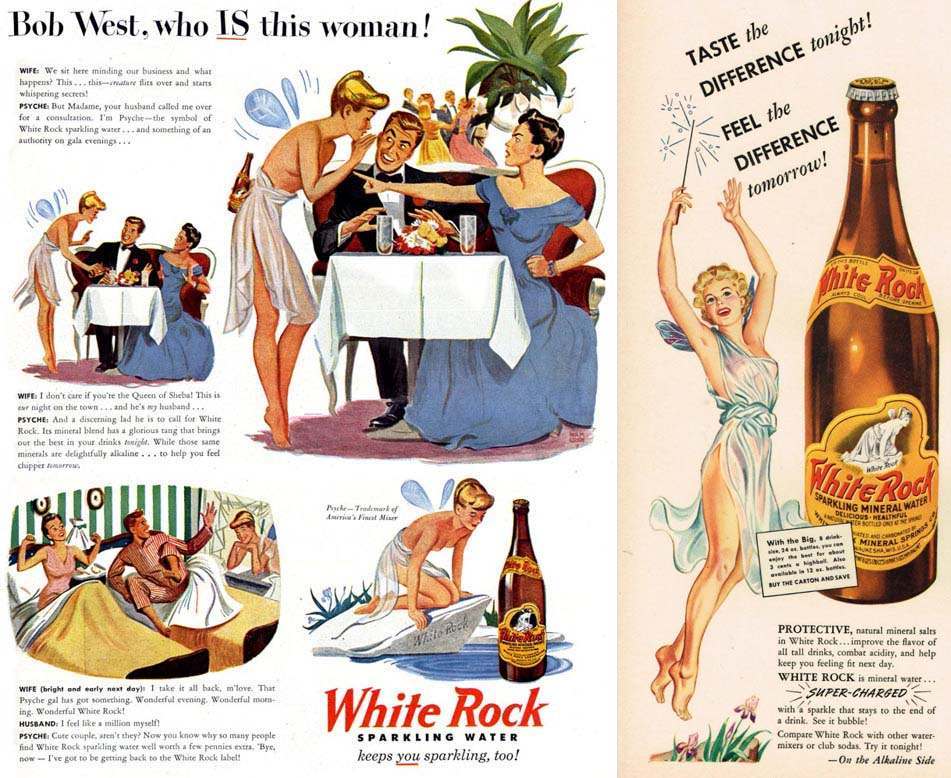 The topless White Rock appears at a restaurant whispering secrets to the husband (check out his expression!) and even at the couple’s bedside.  Notice how they can’t show man and woman sleeping in the same bed, but a topless woman is A-OK. 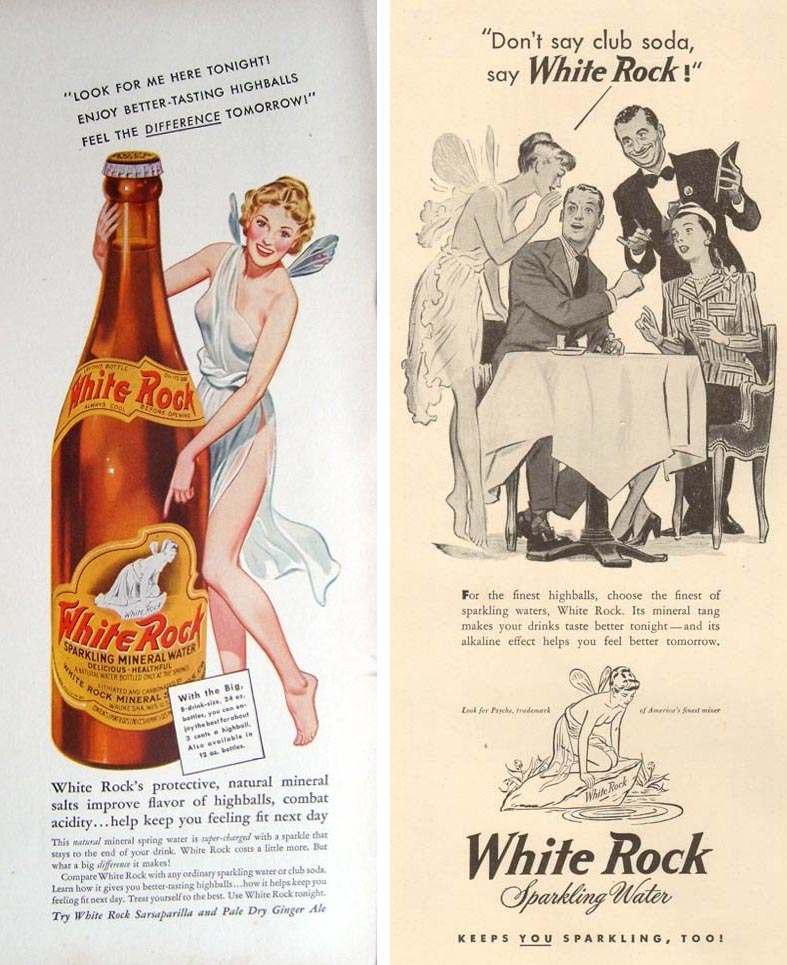 Can you think of a better marketing logo to sell Highball mixers than a half-naked fairy?  Okay, maybe a fully naked fairy, but you get my point. 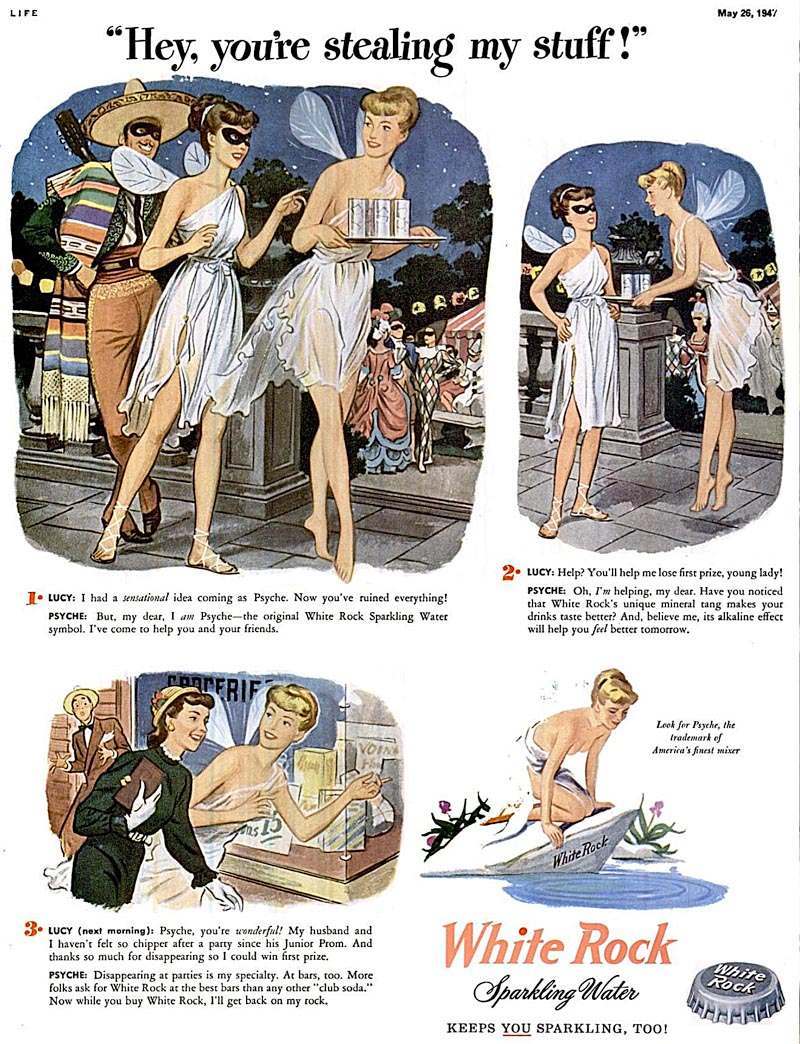 The woman is pissed because she came as Psyche to the costume party, and now she’s being upstaged.  Why is she upstaged?  Because the real Psyche’s wardrobe would get you thrown in jail  (just note the “Mexican”s” expression of devilish lust).    Thankfully, Psyche’s hand is reliably there to cover up those shocking areolas. 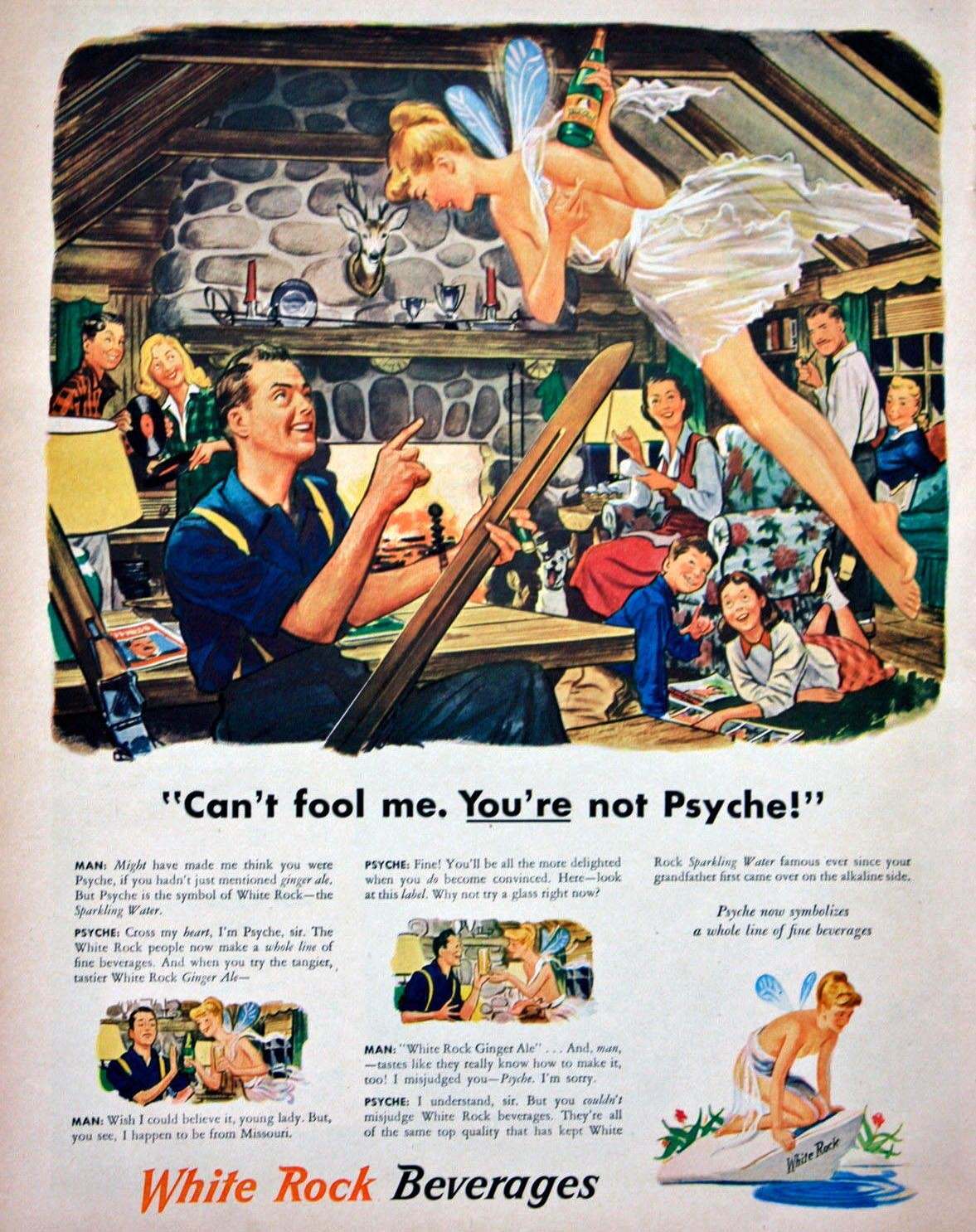 Notice the smiles from the crowd.  Is this the sort of reaction you’d get in response to a topless fairy delivering ginger ale? 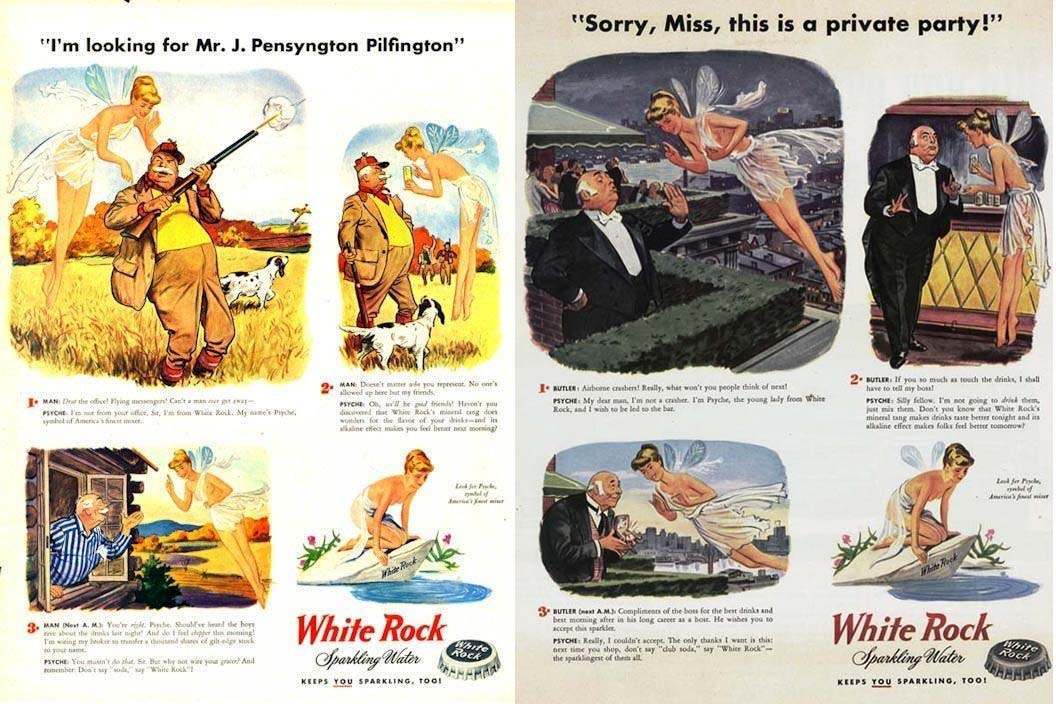 Well, the 1940s were a magical time – with tons of adverts featuring this exhibitionist pixie, but all good things come to an end.  The White Rock company came under new management in 1952 and Psyche’s breasts were no longer on public display.