Pulled from the pages of Fangoria magazines from the early eighties, are some brilliant behind-the-scenes photos of special effects artists at work. 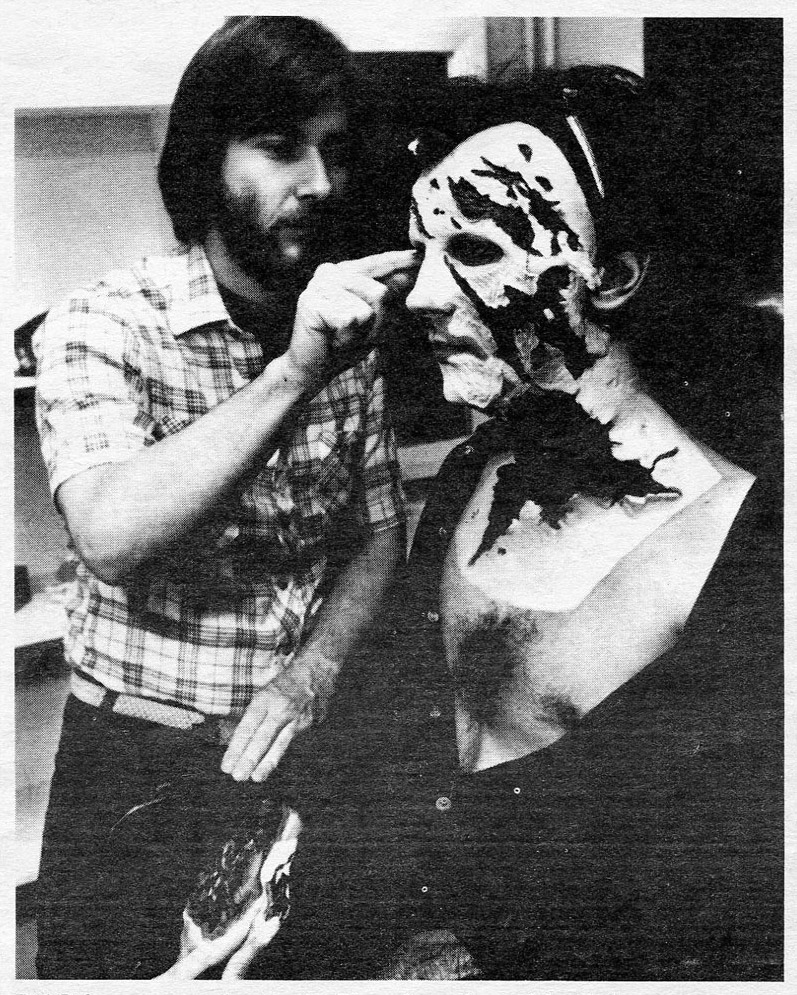 Rick Baker applies the makeup for the undead Griffin Dunne. Below, Baker (in the center) shows his time the internal mechanism of the wolf. 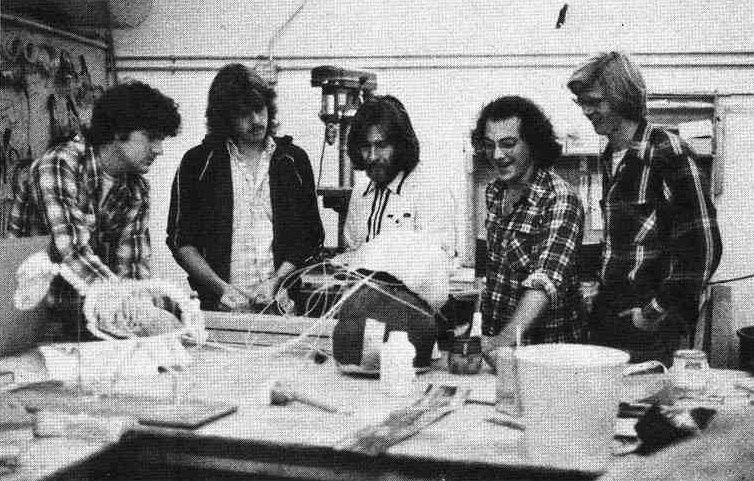 When it comes to horror movie effects, two names stand out among them all: Baker and Tom Savini.  Another great name in the realm of horror special effects is the elder statesman of FX, Dick Smith… 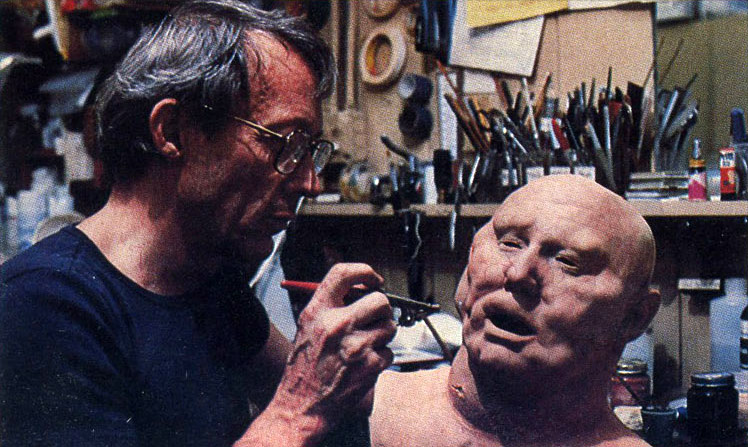 Who can forget the head explosions in the film Spasms?  Before CGI (which IMHO looks so much worse), this was quite the complicated process… 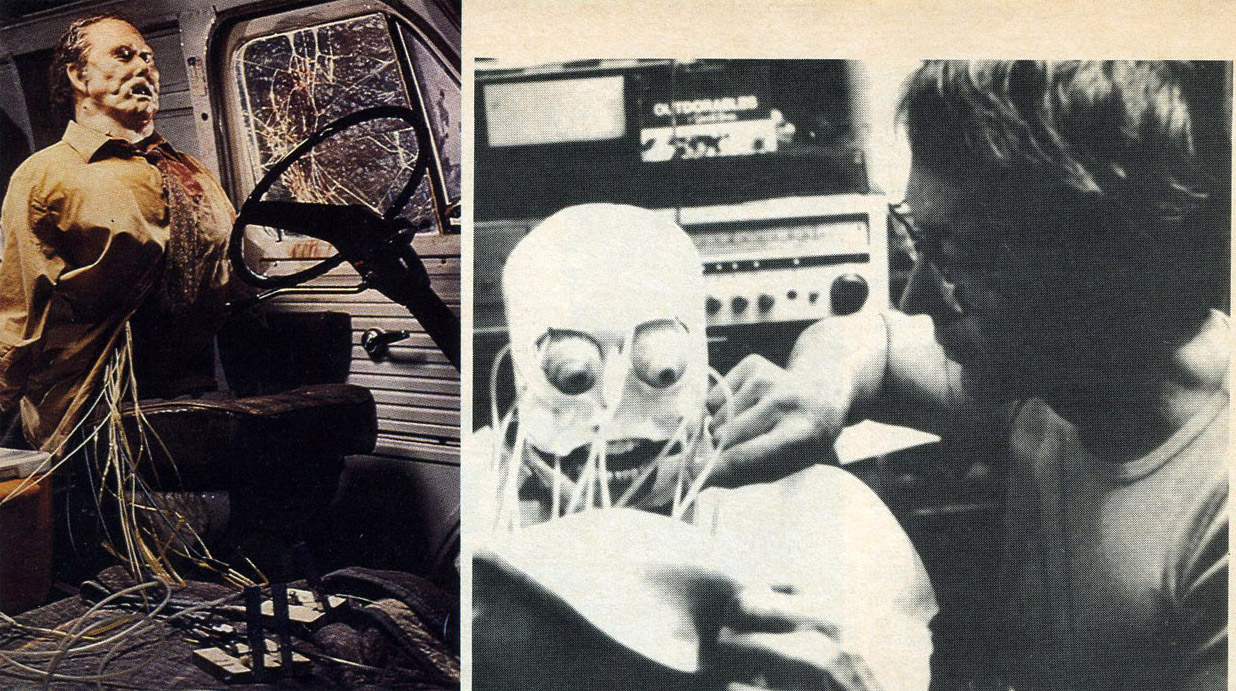 The exploding head involved a network of tubes and a mechanical substructure underneath a lifelike wax dummy. 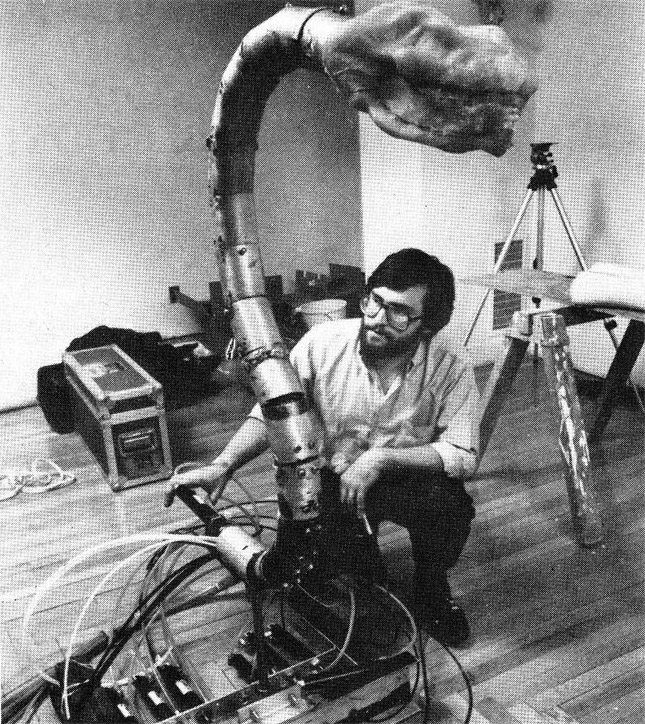 Spasms also featured a giant snake creature which was created via robotics.  Mechanics expert Lew Gluck (pictured above) prepares the complex equipment for the scene.

In the early eighties there was a short resurgence in 3-D films, which included Charles Band’s Metal Storm, a Jaws and Amityville Horror sequel and the Molly Ringwald post-apocalypse adventure, Space Hunter. 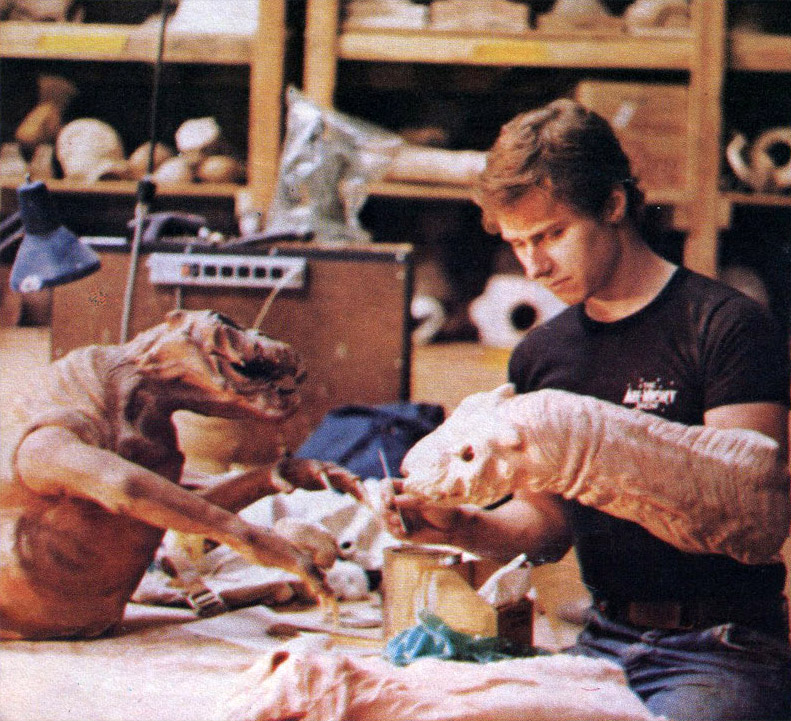 Creating some of the monsters for Metal Storm (1983) 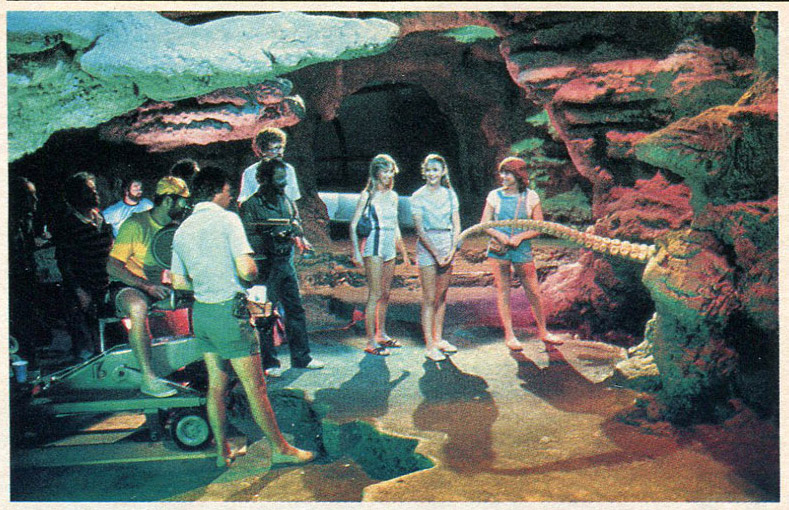 A mechanized tentacle on the set of Jaws 3-D. 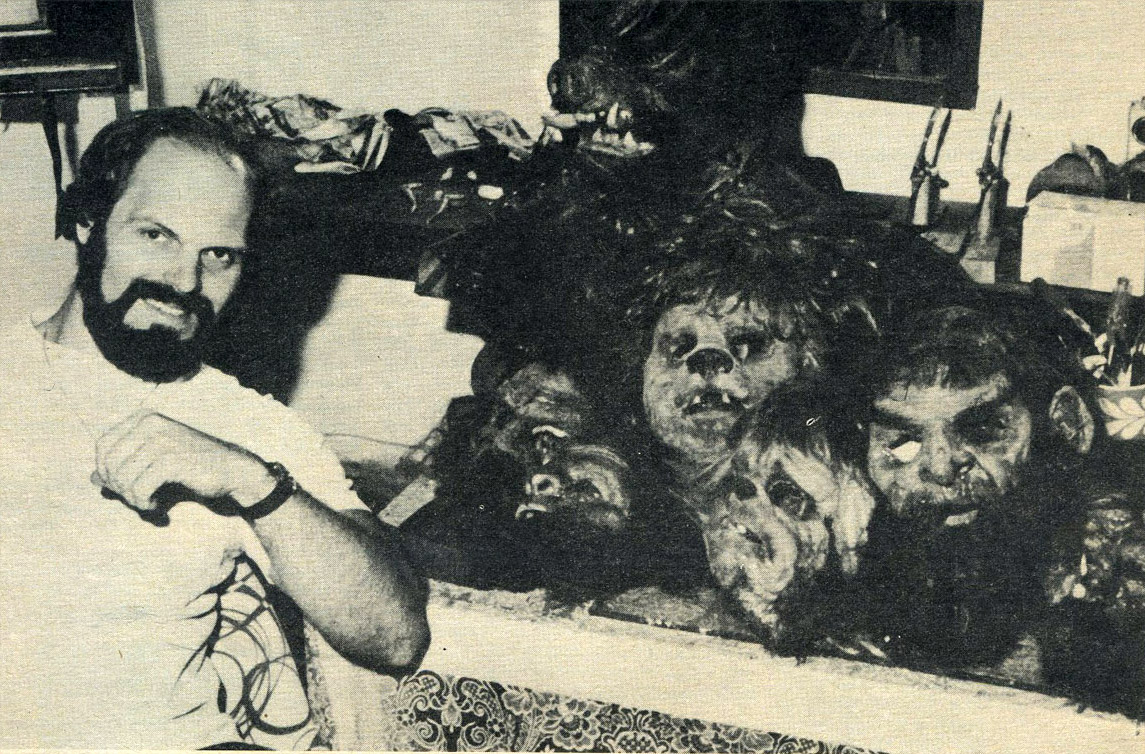 Buechler stands in front his creations for the Roger Corman flick, Deathstalker (1983). 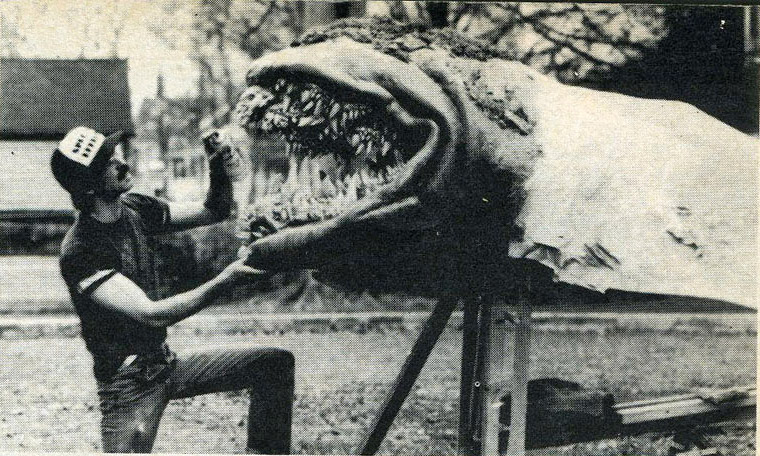 Dods sprays a shiny coat of lacquer over a creature molded from dental acrylic. 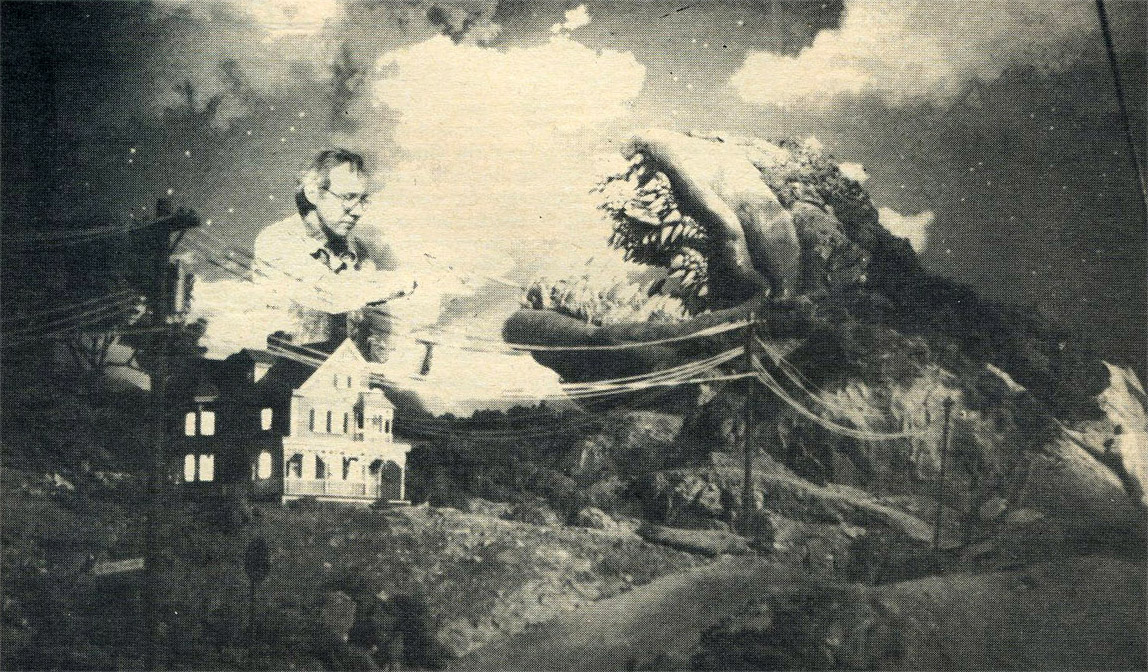 If you read fantasy books in the eighties, then you know the name of Hildebrandt, who illustrated the covers of some of the best known novels of the day.   Here, he works on the set of his own design for Deadly Spawn. 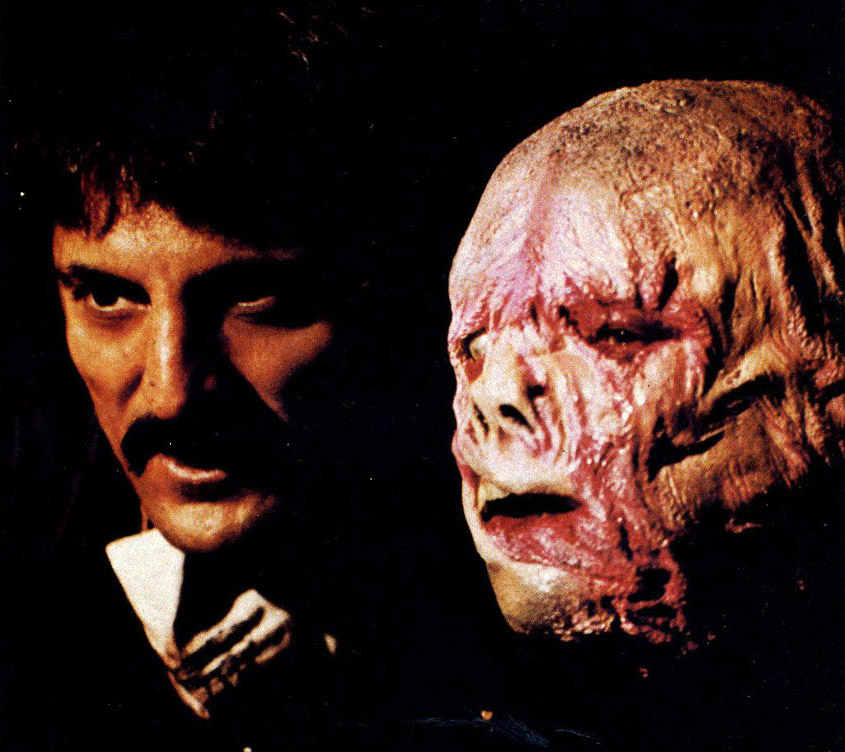 The great Tom Savini poses by his creation, Cropsy, for the underrated slasher film, The Burning (1981) 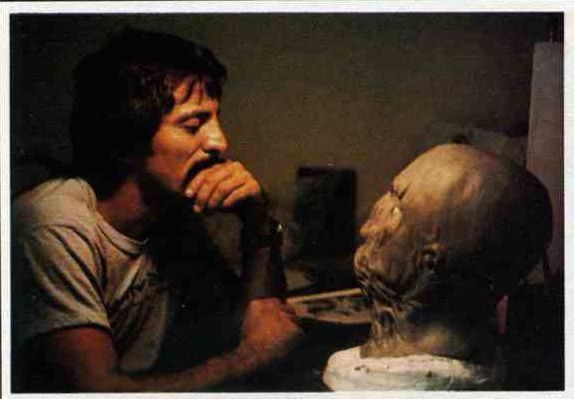 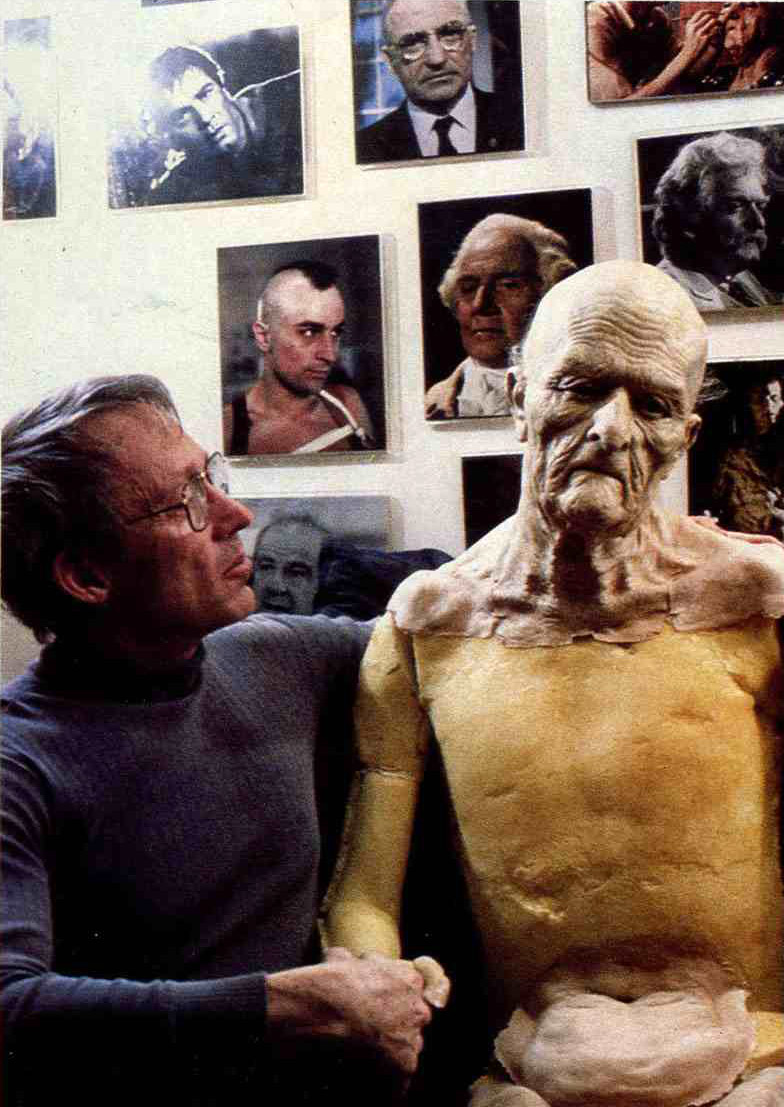 We meet the great Dick Smith again, standing beside his model for an aged David Bowie for the film, The Hunger (1983).  Below, a younger Smith poses in front of his face cast collection. 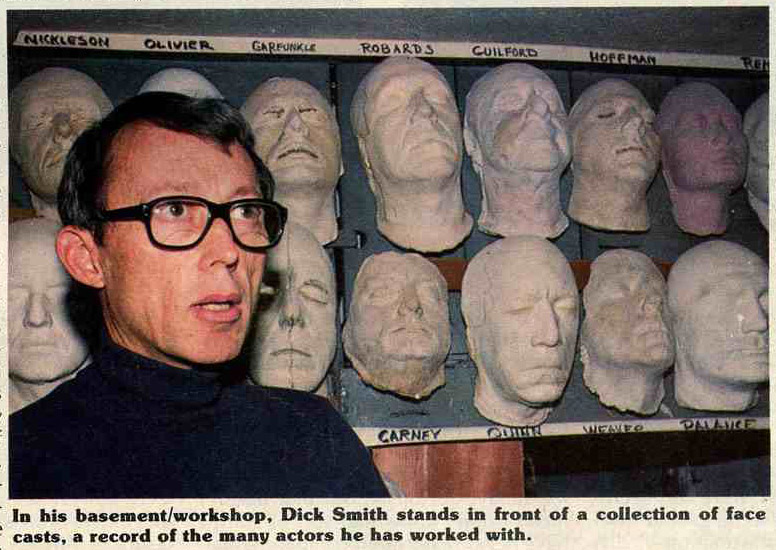 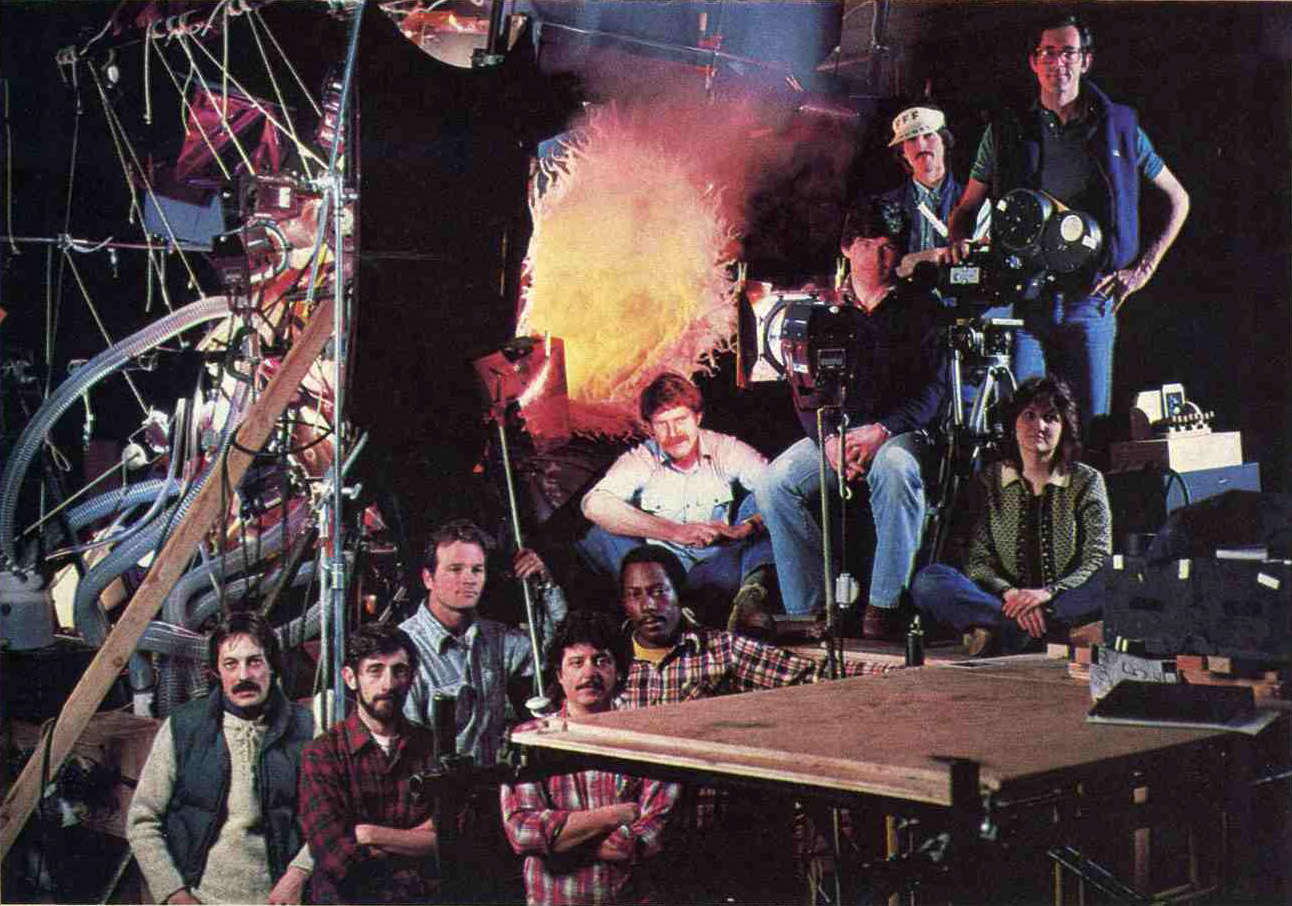 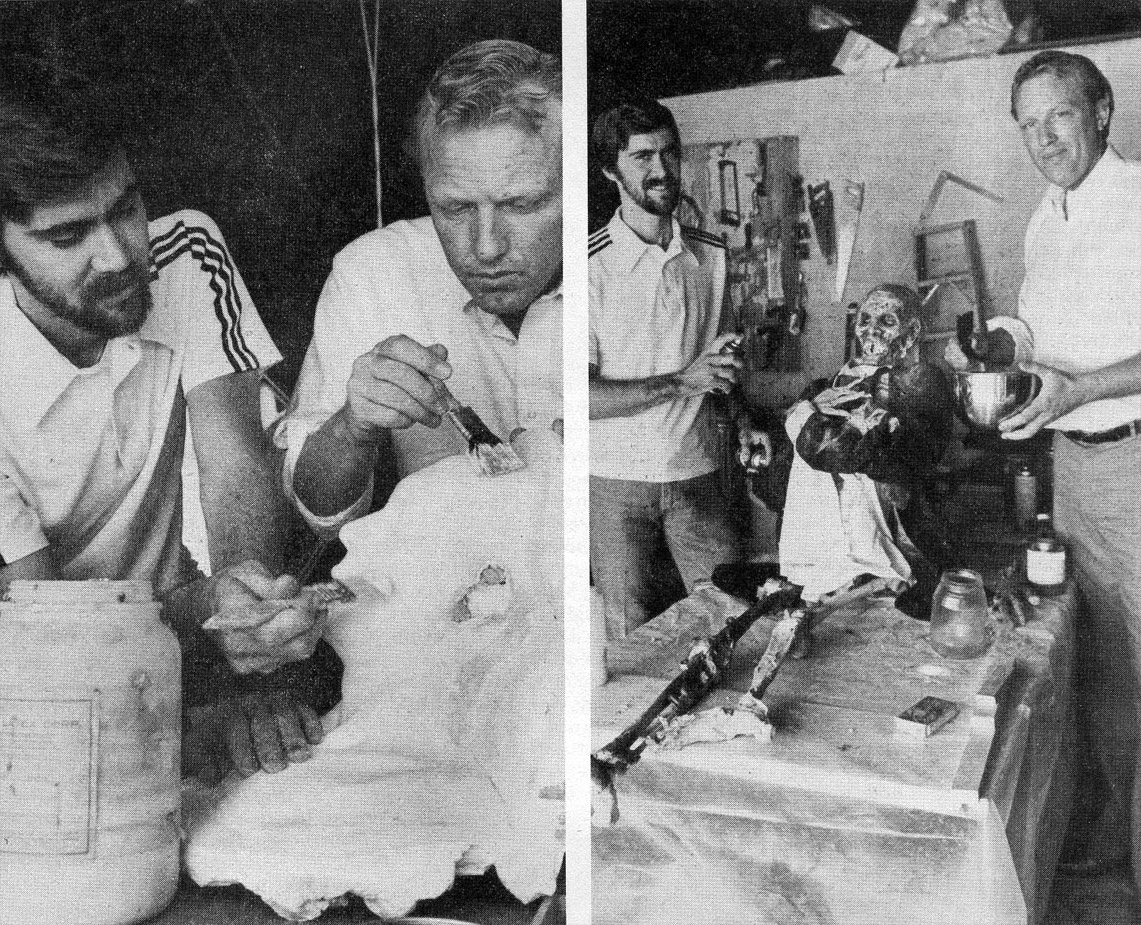 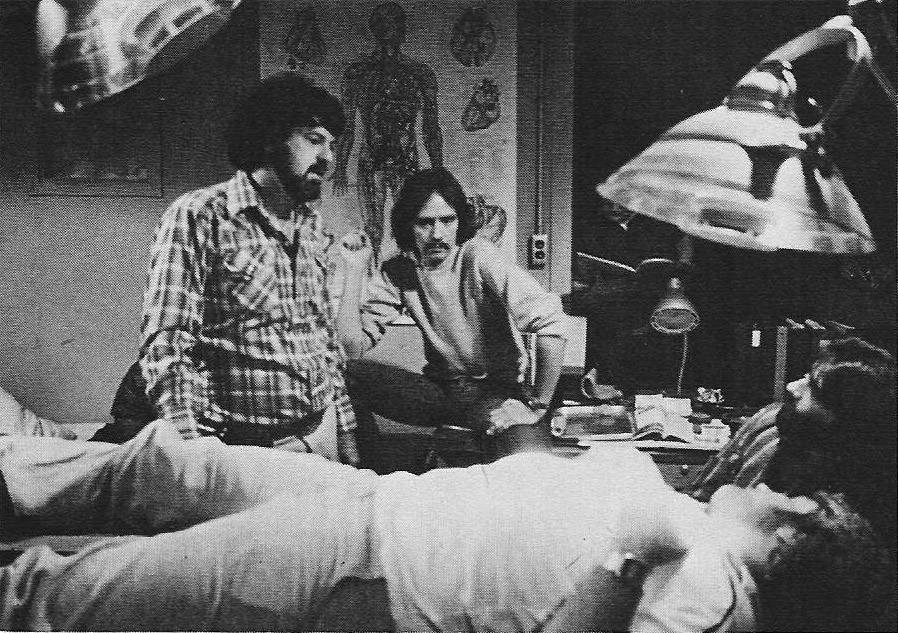 Bottin (bottom right) and John Carpenter preparing a major effects sequence for the film, The Thing (1982). 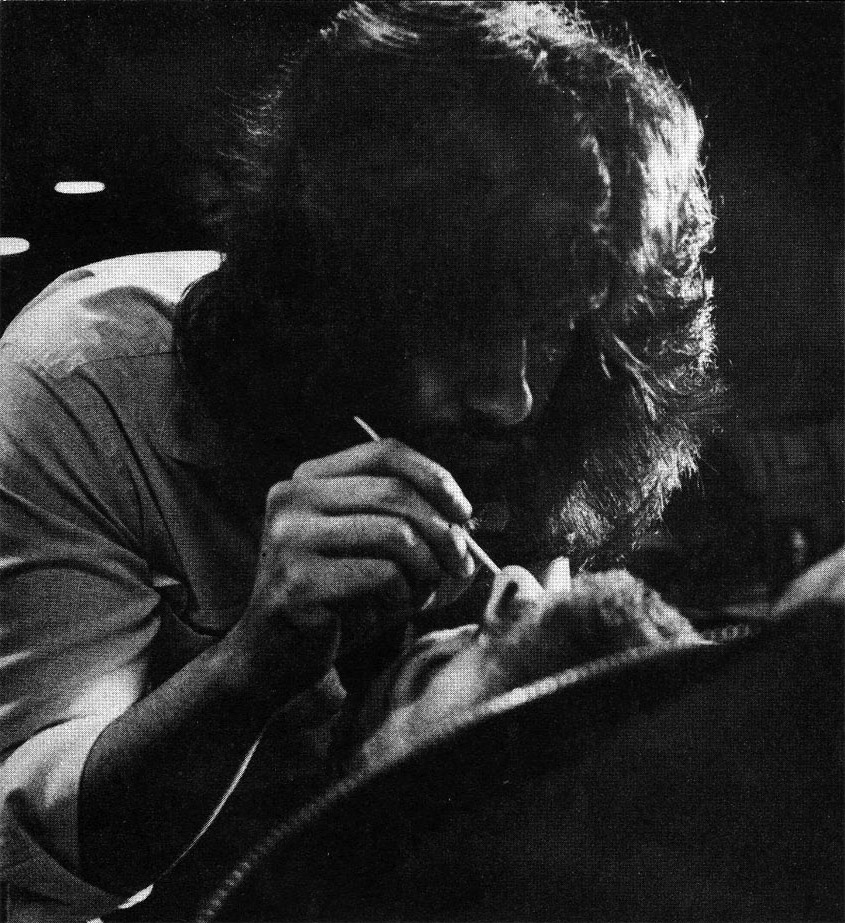 Bottin applying an attention to detail on the set of The Thing; an art form that is slowly going bye-bye thanks to CGI.  Thankfully, newer big-budget films such as Star Wars have recognized that CGI alone doesn’t cut it.  Practical effects are still required if you want your effects realistic. 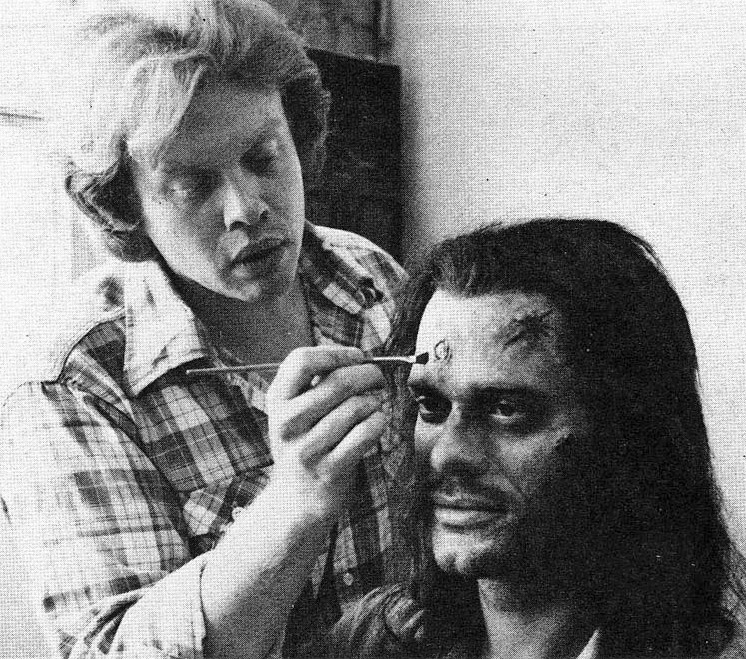 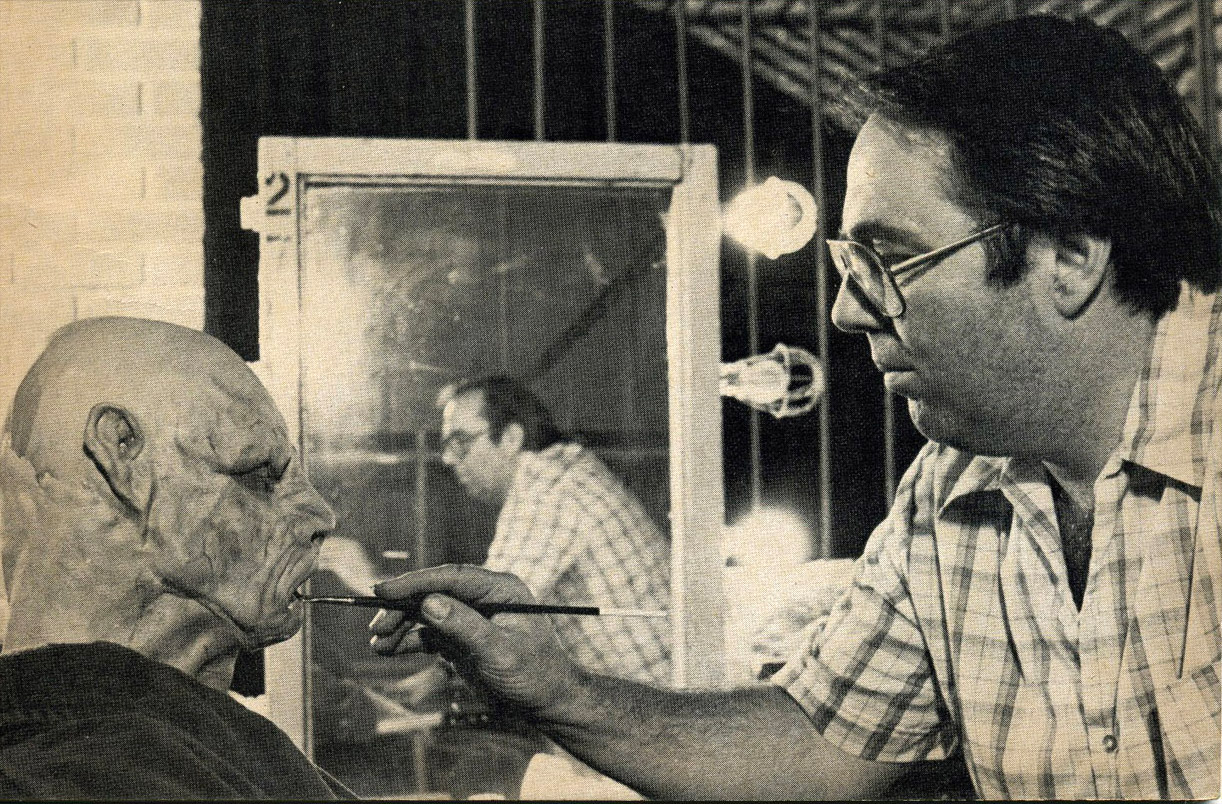 Malcolm McDowell underwent a grueling makeup procedure by Tom Burman for his role in Cat People. 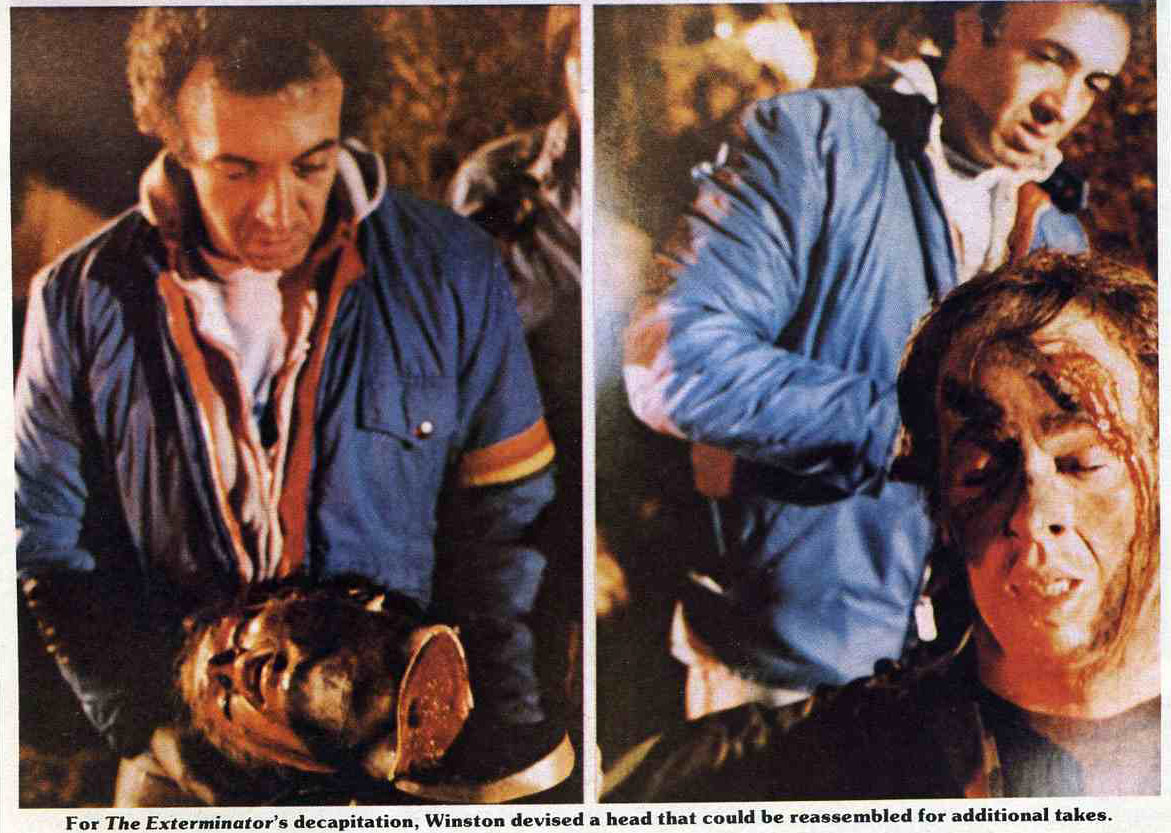 A list of 1980’s effects artists wouldn’t be complete without including Stan Winston, who would go on do Terminator 2, Jurassic Park and Aliens. 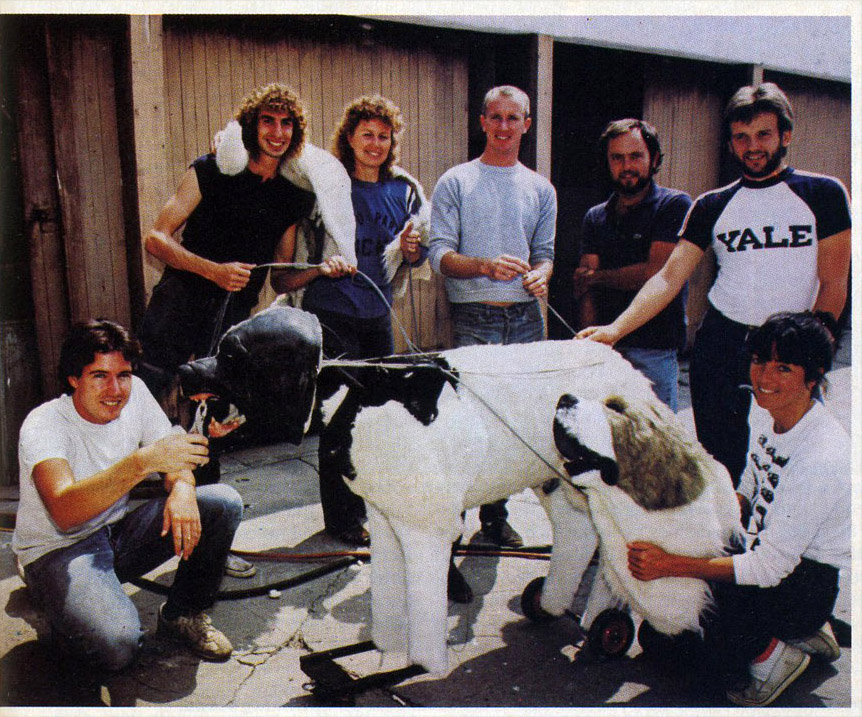 Knowlton (third from right) and his crew for the Stephen King adaptation, Cujo. 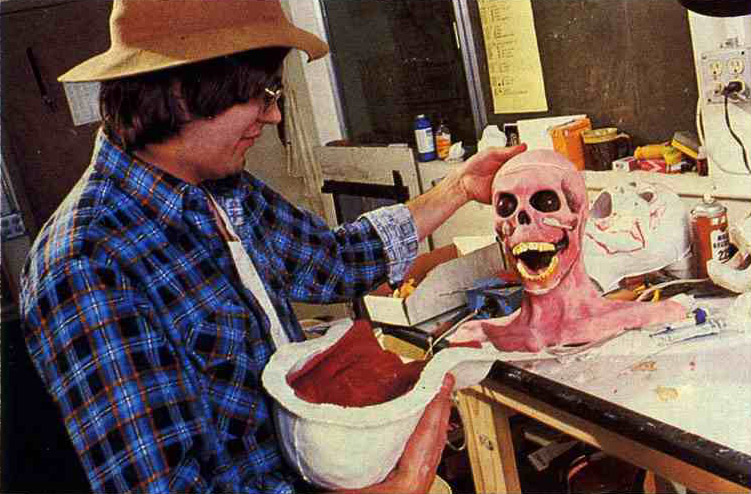 Chris Walas may not have the name recognition of Savini, Rick Baker, or Dick Smith, but he was on many of the big projects of the eighties, including Caveman (above) and Raiders of the Lost Ark (below). 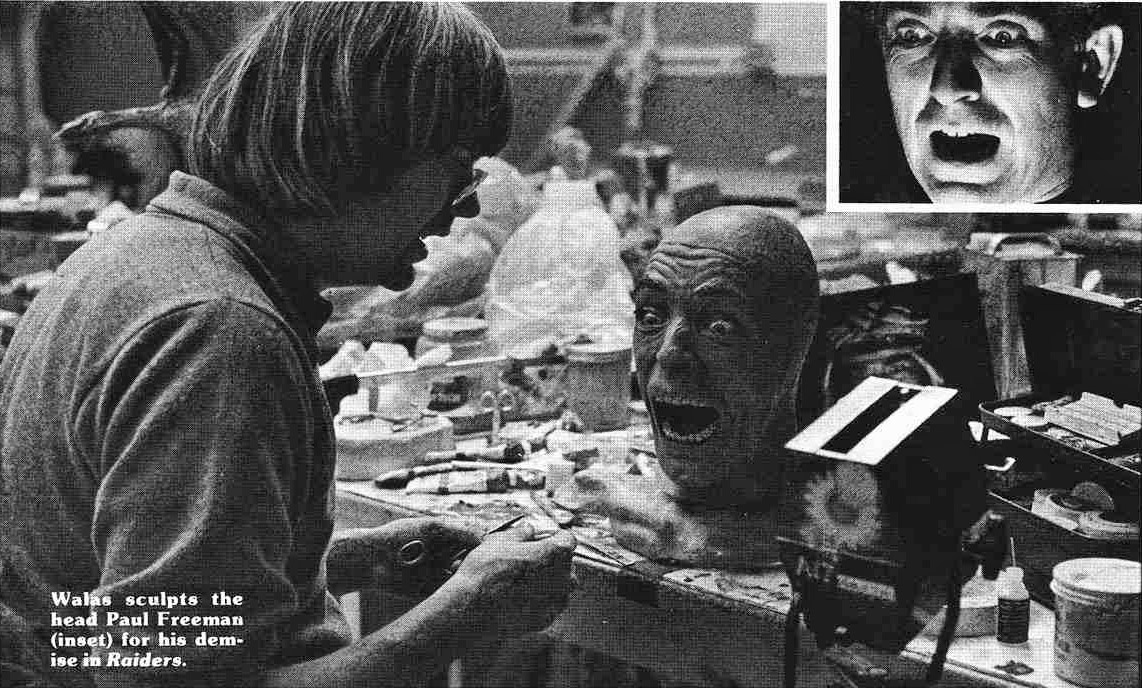 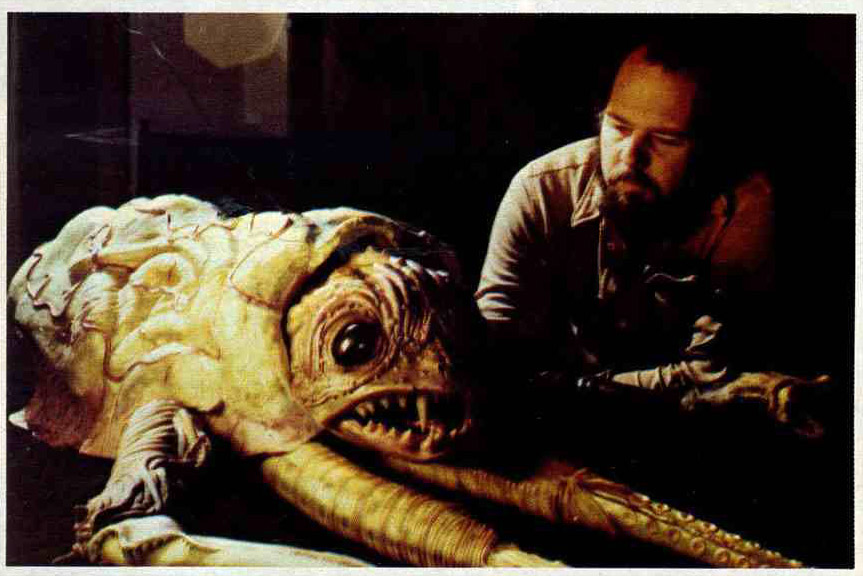 Anyone remember The Boogens from 1981?  So many of these horror flicks came and went; so much work went into their practical effects, they don’t deserve to be forgotten.  Thus, the reason for this post.