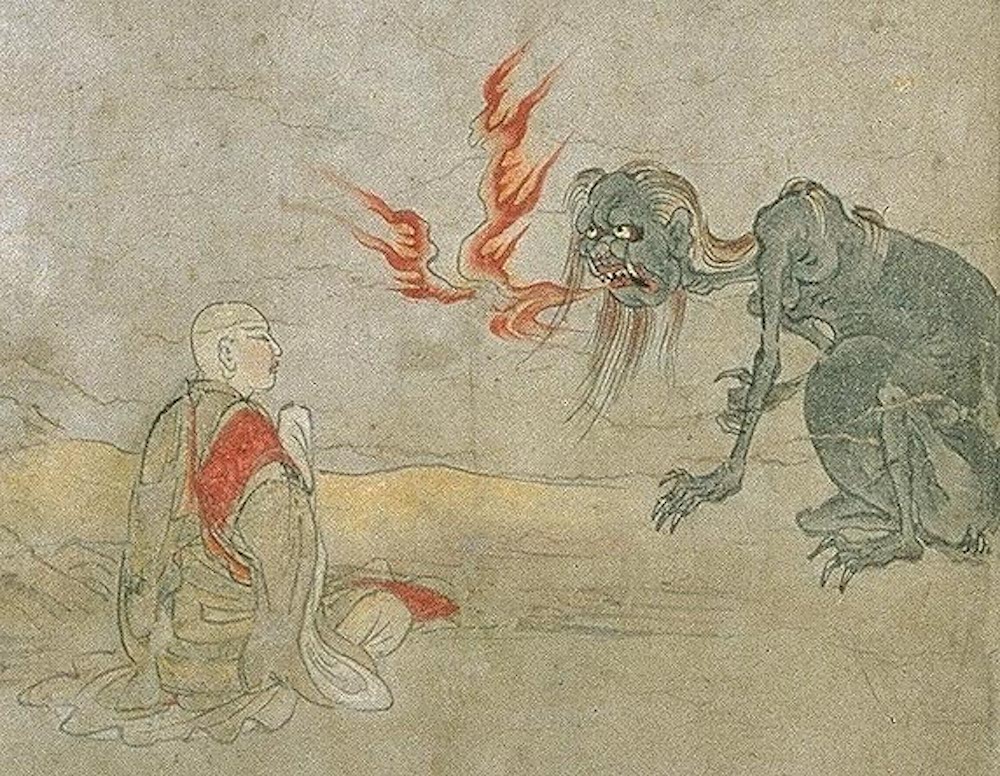 In Buddhist teaching, all beings cycle endlessly through six realms of existence: human, animal, jealous god, happy god, hell, and hungry ghost. The first realm is the most desirable, and the last condition, perhaps, the most harrowingly abysmal, even worse than the innumerable tortures of various hells. We can imagine the Greek Tantalus, punished forever with unquenchable thirst and insatiable hunger, while just out of reach there sits a feast. Hungry ghosts, or gaki, however, take their torments on the road. 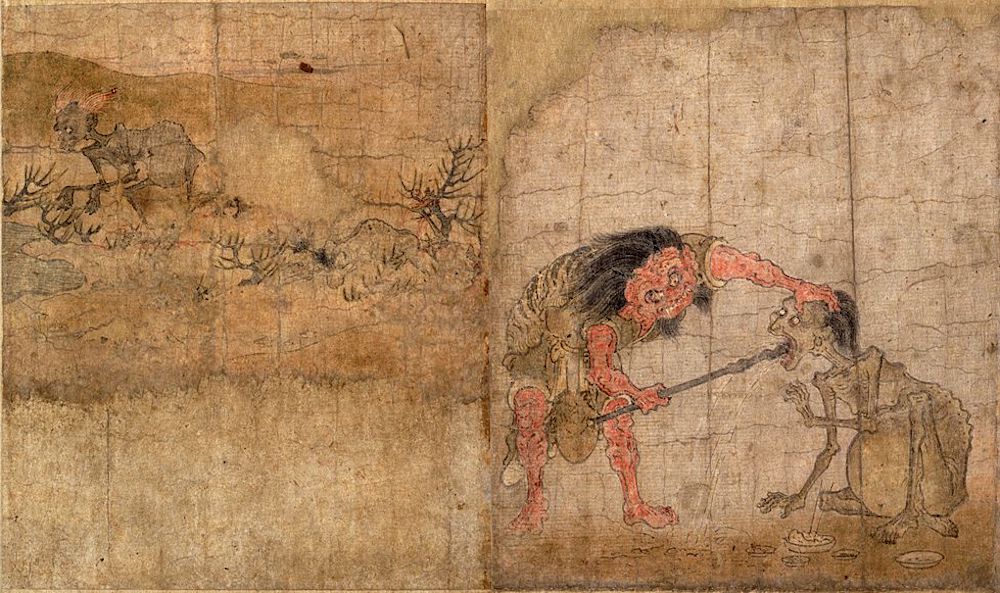 Hungry ghosts are fated to wander, famished beyond measure, visiting favorite haunts while they’re reshaped, Gollum-like, into grotesque entities with large, empty bellies and impractically thin necks. Whatever they’re able to extract from any food and drink around them does nothing to nourish them at all. Food tastes like poison, water — when the demons let them get near it — burns like fire. It’s hopeless. 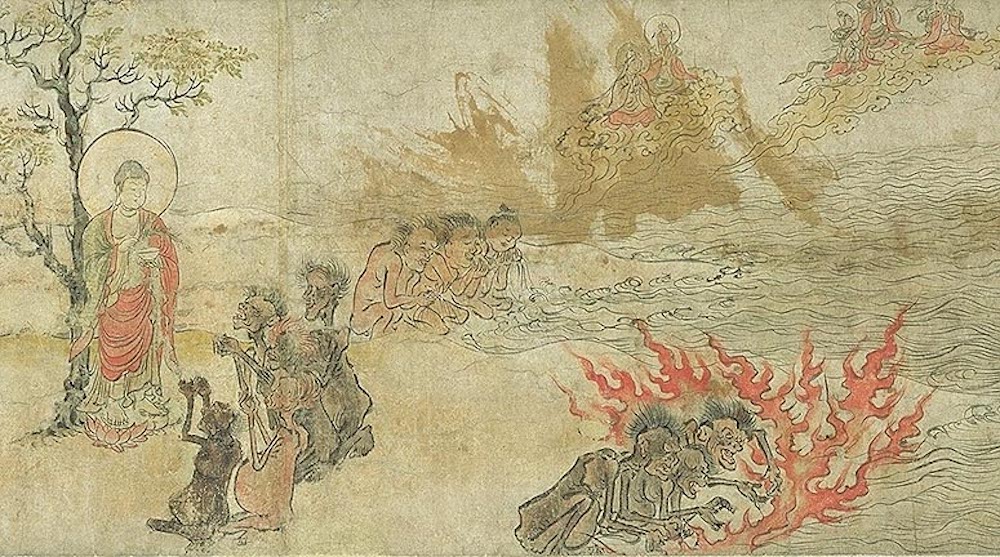 How these supernatural beings became folded into observances of ancestor worship in Medieval Japan is the subject of many a cultural study. Suffice to say that every summer for a period of about two weeks, typically beginning in August, Japanese families around the country celebrate the festival of obon, a time to honor ancestors — and feed any hungry ghosts around. (In China, where many of these traditions originate, the end of July and most of August constitute an entire Hungry Ghost Month.)

Ancestor and hungry ghost rituals in Japan get enacted by Buddhist families, Shinto families, by those who hold no preference whatsoever. They are not especially religious practices. Oddly, Western Zen Buddhists have made them more solemn by moving the festival of Segaki (or Sejiki) from July to late October, a more or less serious attempt, perhaps, to answer Halloween’s commercial reach, implant new habitus in Western minds, pay homage to the constant craving for sweets and otherwise that possesses everyone in some measure.

We may know the Hungry Ghost from popular culture, in translations of Kaidan (or Kwaidan) — folkloric ghost and demon stories — into manga and film. These form the origin, for example, of the story quartet in Masaki Kobayashi’s Kwaidan. Anthony Bourdain titled his 2018 comic book collaboration with Joel Rose Hungry Ghosts. A graphic satire of the insatiable foodie world Bourdain held in contempt, the comic also popularly introduced the game of 100 Candles, a macho Edo-period ritual in which samurai tried to one-up, and scare the shit out of, each other with ghost stories. 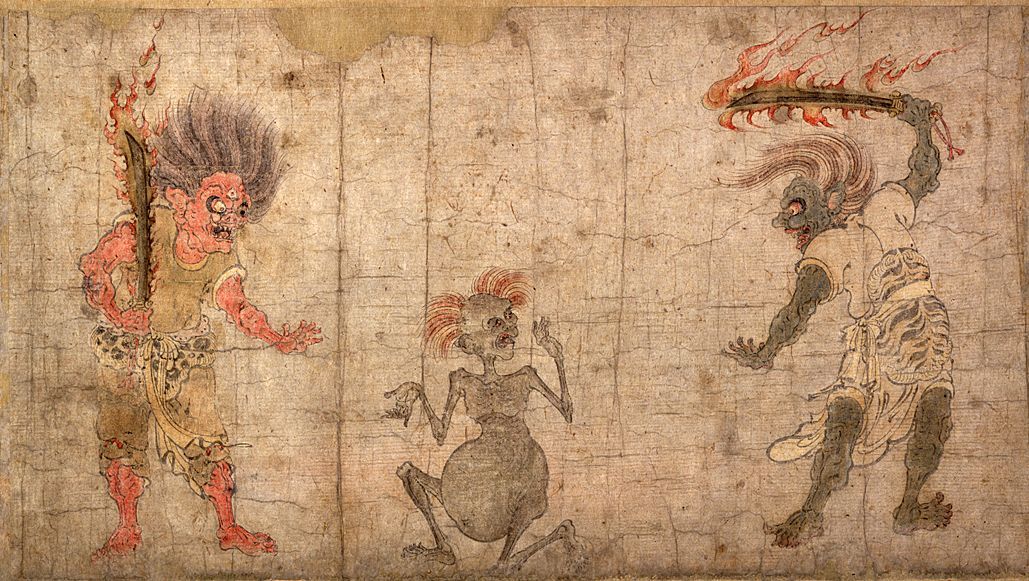 Stories about hungry hosts in Japanese folklore and pop culture have to a great degree themselves been informed by earlier mass media representations, so to speak, most notably the medieval scroll art known as Gaki Sōshi. In a Google exhibit, the Kyoto National Museum describes the many such artifacts in their collection:

Gaki Sōshi are illustrated handscrolls depicting the world of gaki (Skt. preta, or “hungry ghosts”)—spirits condemned to eternal hunger and thirst. Gaki Sōshi were created in the late Heian (794-1185) to early Kamakura (1185-1333) periods, when the country was ravaged by wars, and like the hand scrolls depicting hell (Jigoku Sōshi) and diseases (Yamai no Sōshi) reflect an attitude of looking unflinchingly at harsh reality.

These are not depictions of honoring familial ancestors. They “generally contain episodes of the sufferings that the gaki endure,” the museum points out, but some also show “episodes of their salvation” — thereby introducing a minor doctrinal dispute that happens to play a major role in the ghost story. Can the spirits be appeased? Can they be released from wretched states of wandering unrest? The idea of such an existence rightfully makes us shudder, so it makes psychological sense to ward it off with offerings, in the hope, at least, that no part of ourselves should suffer this fate.

Despite their transformations into monsters on the page and screen, hungry ghosts in these scrolls pose no harm to the living. Here, as in most traditional stories of hungry ghosts from India and China, they are piteous creatures. Pursued by demons, ministered over by the buddhas and their followers, they mostly escape the notice of acquisitive human beings…. Except a few times a year when millions of people stop to notice how they’re all mixed up with the ancestors… how there are hungry ghosts everywhere among the living and the dead. 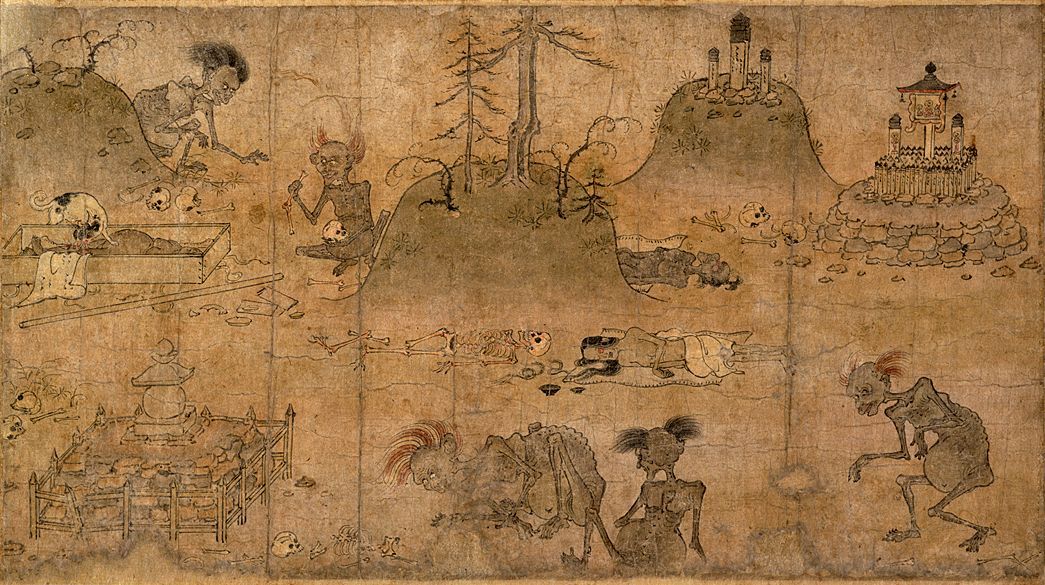 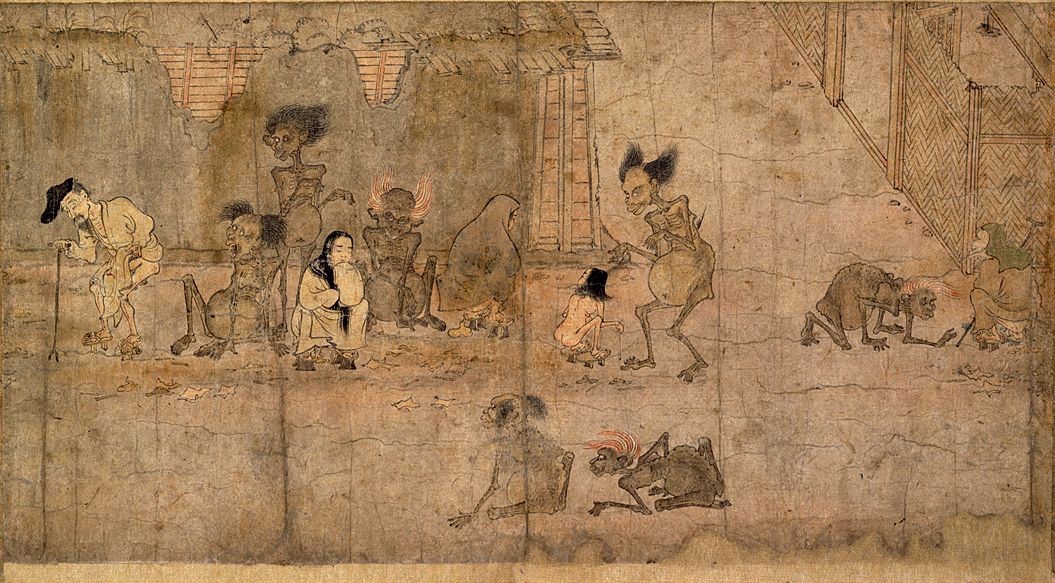 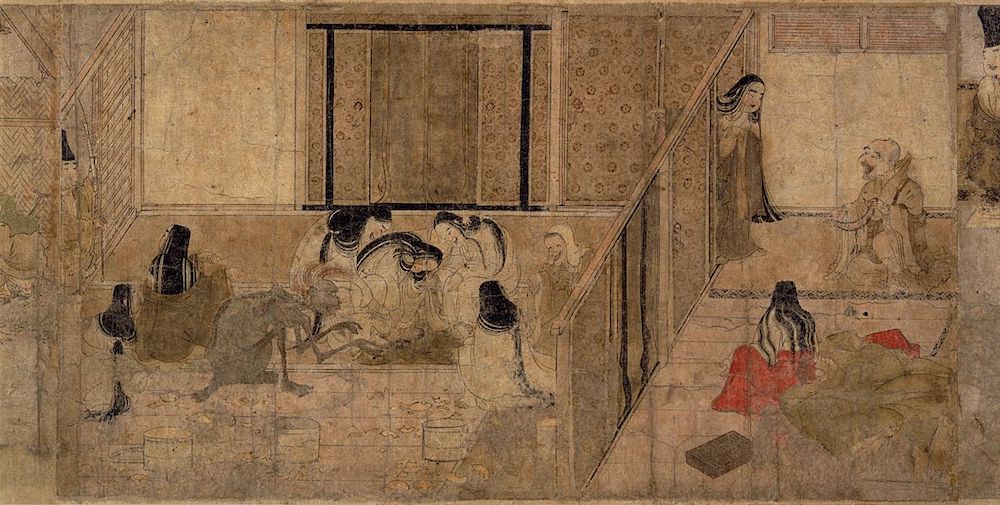 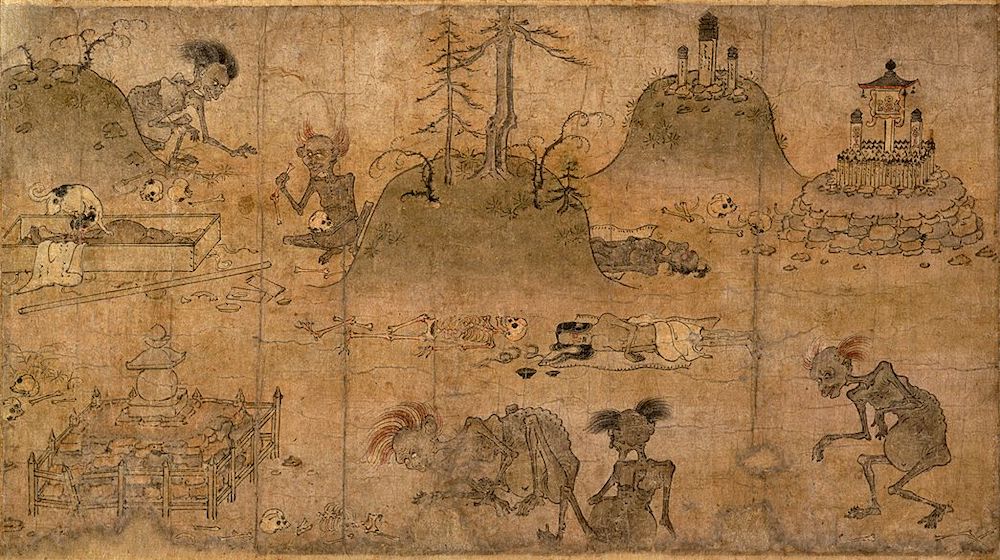