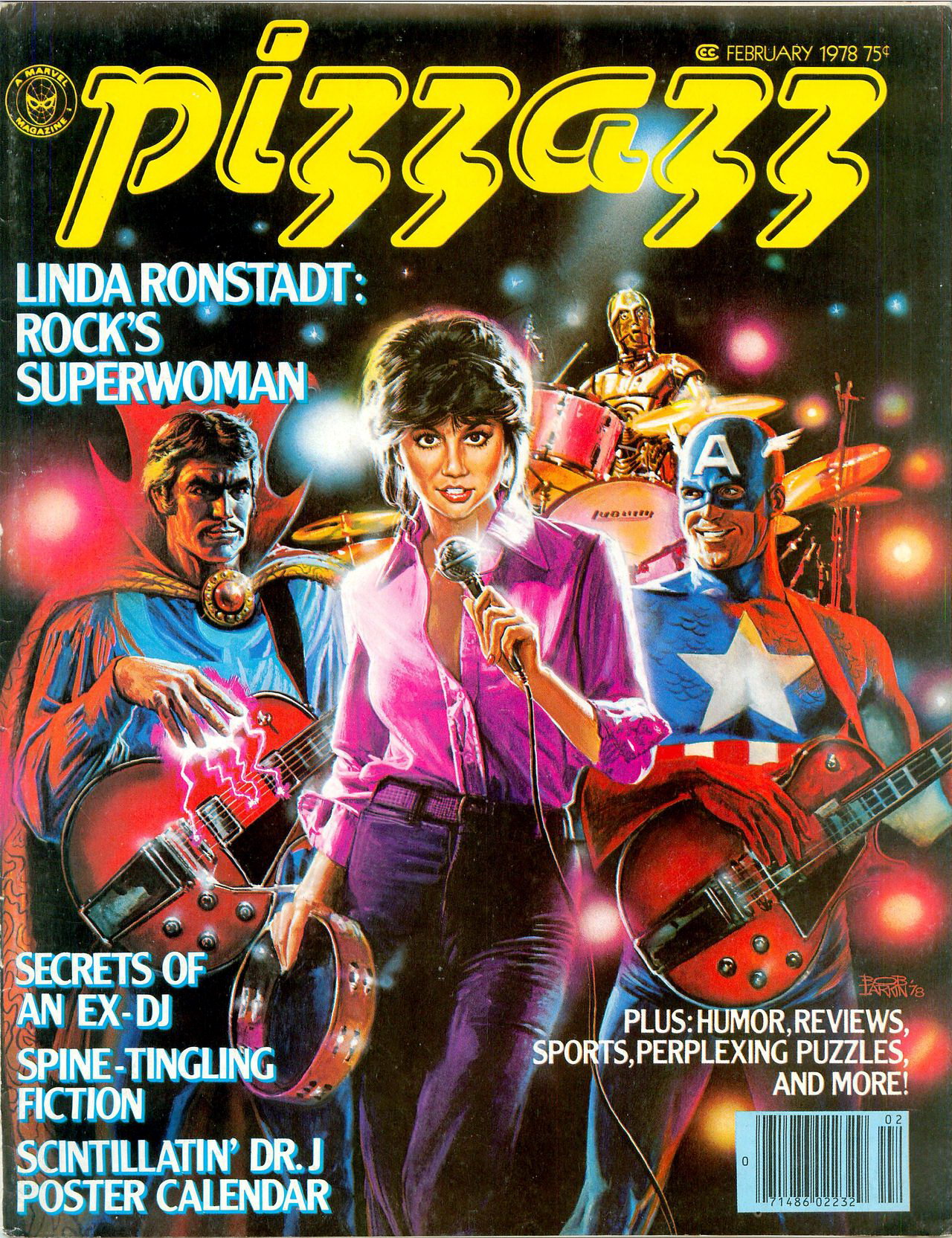 This has to be the coolest magazine cover of all time: Linda Ronstadt with a backup band consisting of Dr. Strange, Cap, and C-3PO!  God it was great to be a kid in the 1970s… and Marvel’s Pizzazz magazine captured the mojo of the 70s kid perfectly, filling its pages with superheros, monsters, sports, Star Wars, pop music, bad jokes, and so much more.  Let’s have a look at this issue from February 1978 – Enjoy! 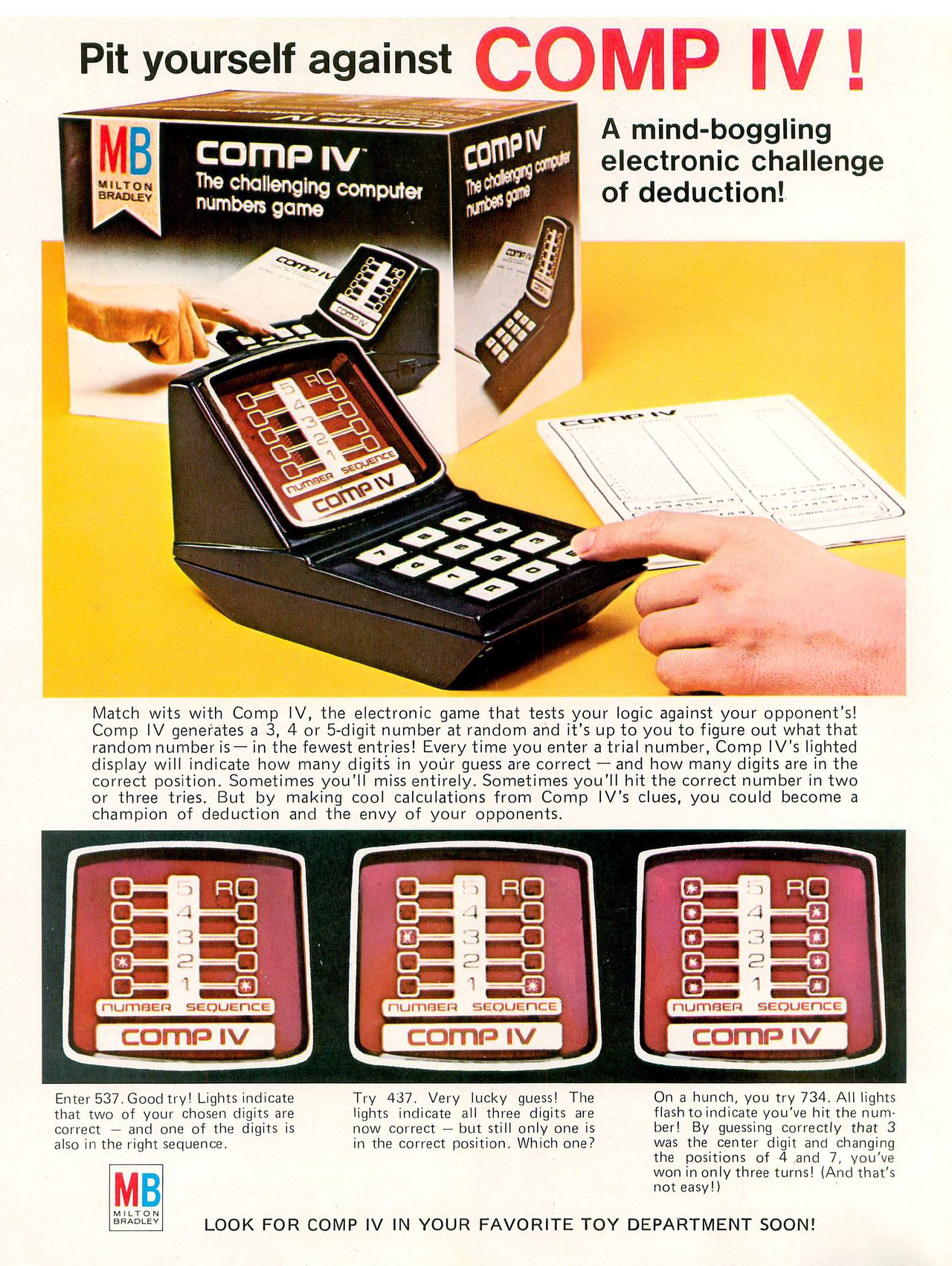 Comp IV sounds like the lamest, most boring game of all time (the player simply has to guess the correct number); however, to a kid in 1978, this was a must-have.  Suffice it to say, we were easily pleased when it came to our technology.  Just provide some buttons to press and some flashing bulbs, and we were sold. 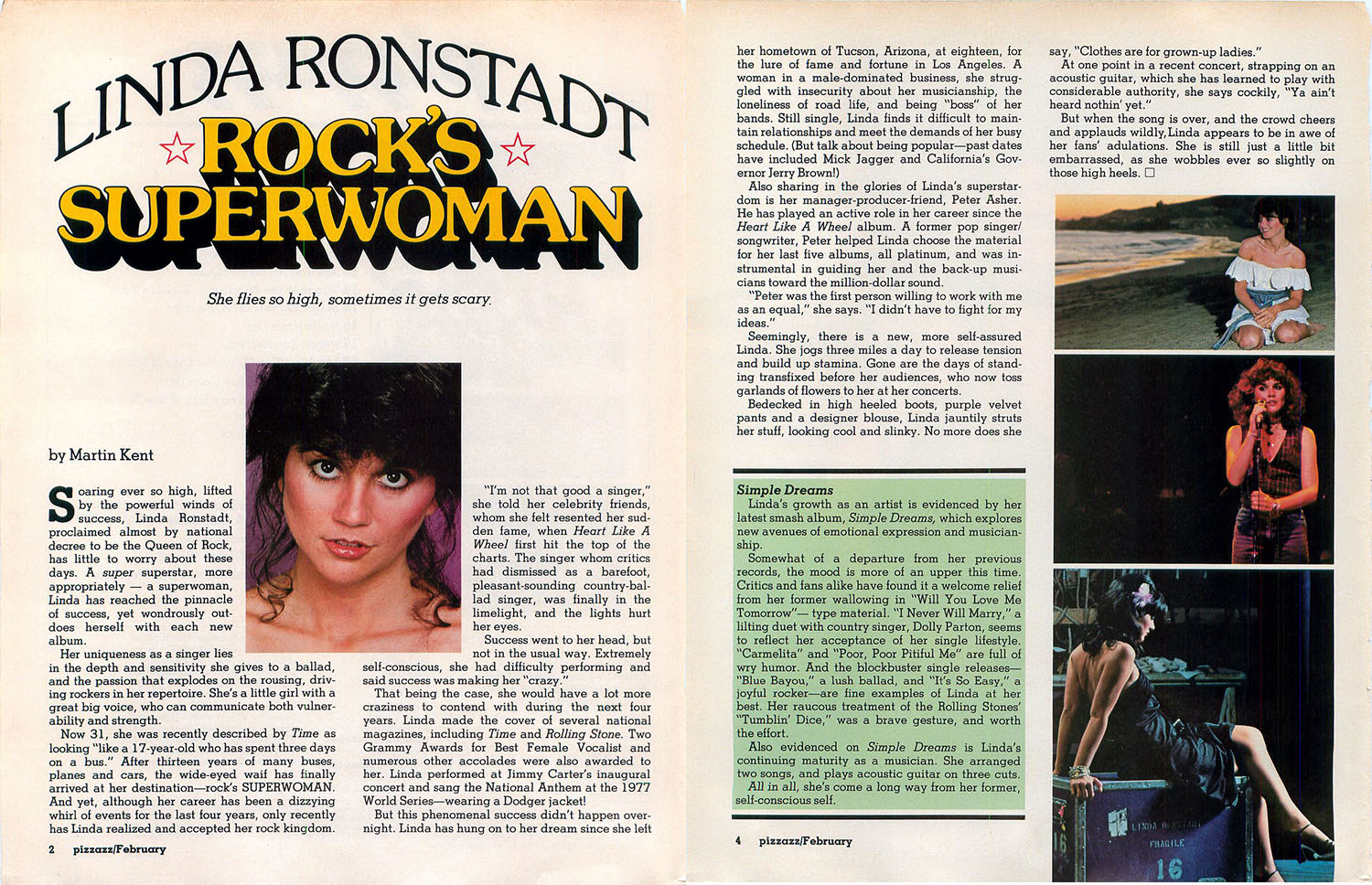 A weak little puff piece on this issue’s cover girl.  I’m not sure how many 70s kids were buying Linda Ronstadt albums – I’m going to go out on a limb and say not very many.

When it came to what was spinning on the a young lad’s record player in the late 70s, it was more likely Kiss or something from the collection below… 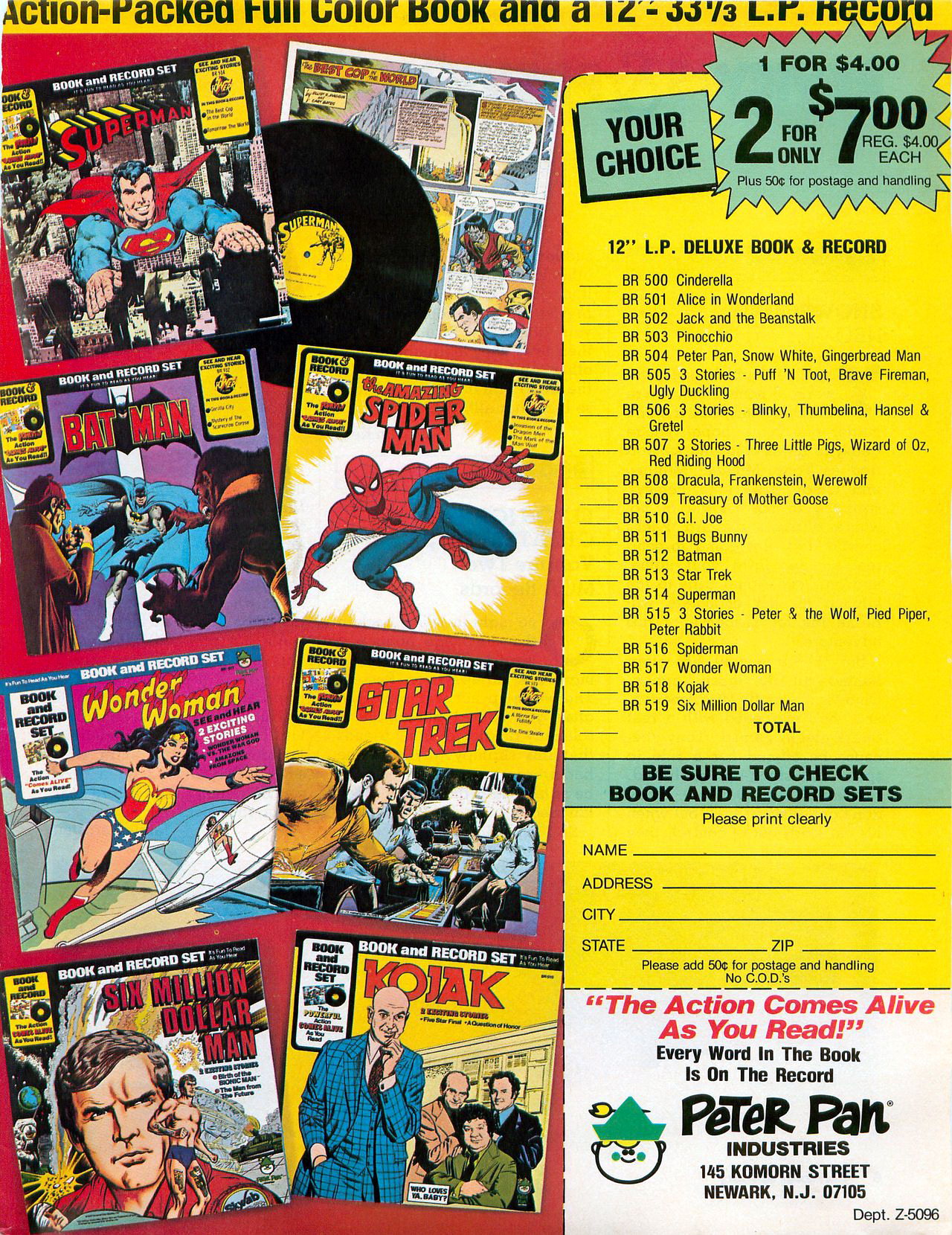 Believe it or not, I still have the Kojak album pictured above.  It was a weird phenomenon unique to the 1970s: kids watched (and became fans of) shows clearly not meant for youngsters.  Watch an episode of Kojak – there isn’t a damn thing that should appeal to a kid… yet, we had Kojak lunch boxes, Kojak records, Kojak coloring books… WTF?

I think this phenomenon can be traced back to the fact that there just wasn’t much in the way of kid’s television (aside from Saturday mornings), and Gen Xers were forced to watch whatever dad was watching… and, more often than not, that meant Kojak, Starsky & Hutch,  All in the Family, and other programs clearly not aimed at an elementary school audience. 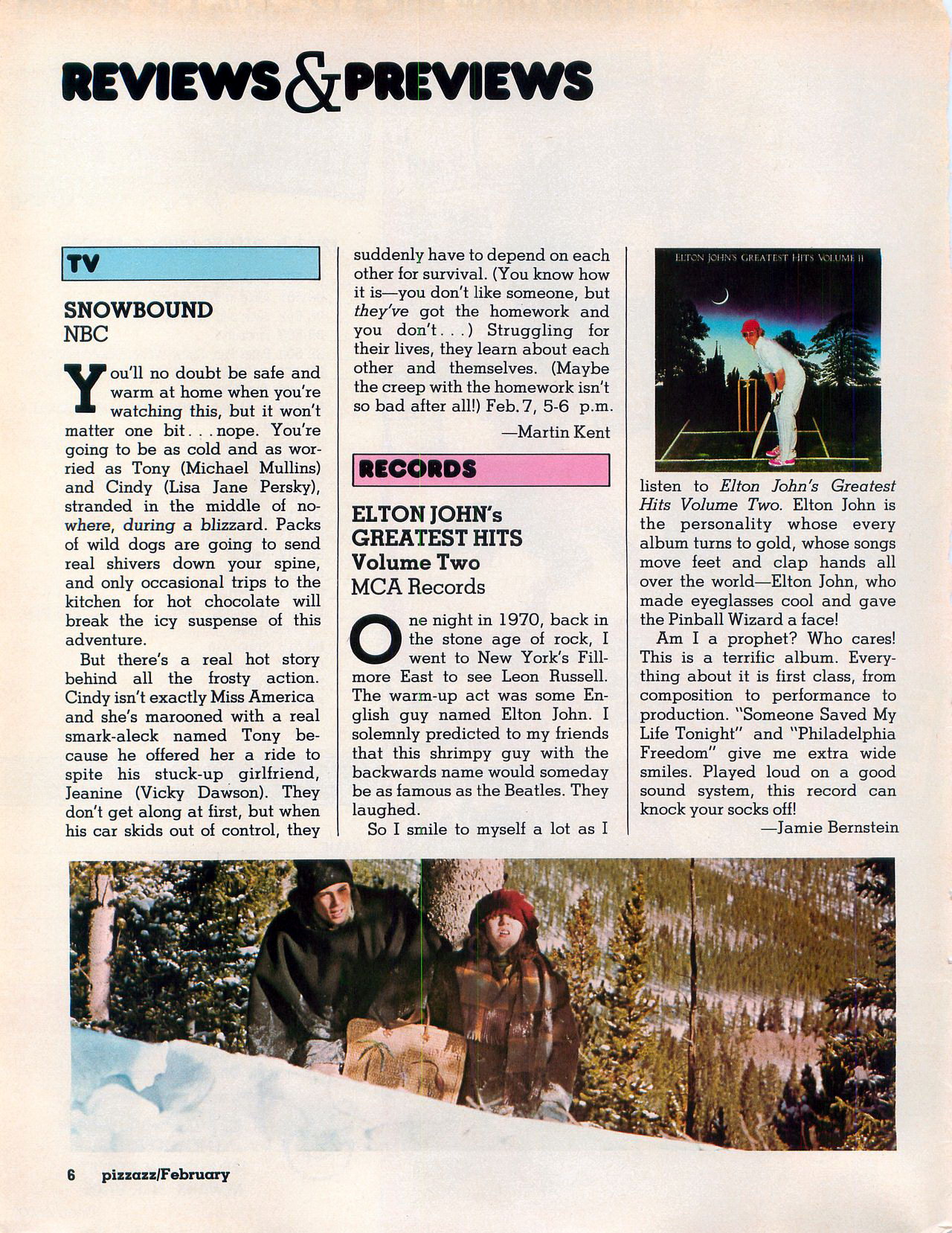 It’s funny how so many of these TV movies like “Snowbound” became part of Gen X’s collective conscious.  Back when there was slim pickings for young audiences at the cineplex, we relished the TV movie.  Sure, there was Star Wars, but that was an anomaly, clearly tapping into a vast need; but most of the features at the theater were either adults only, or crap like The Apple Dumpling Gang.  We were a long way off from a constant feed of Pixar and a Marvel movies. 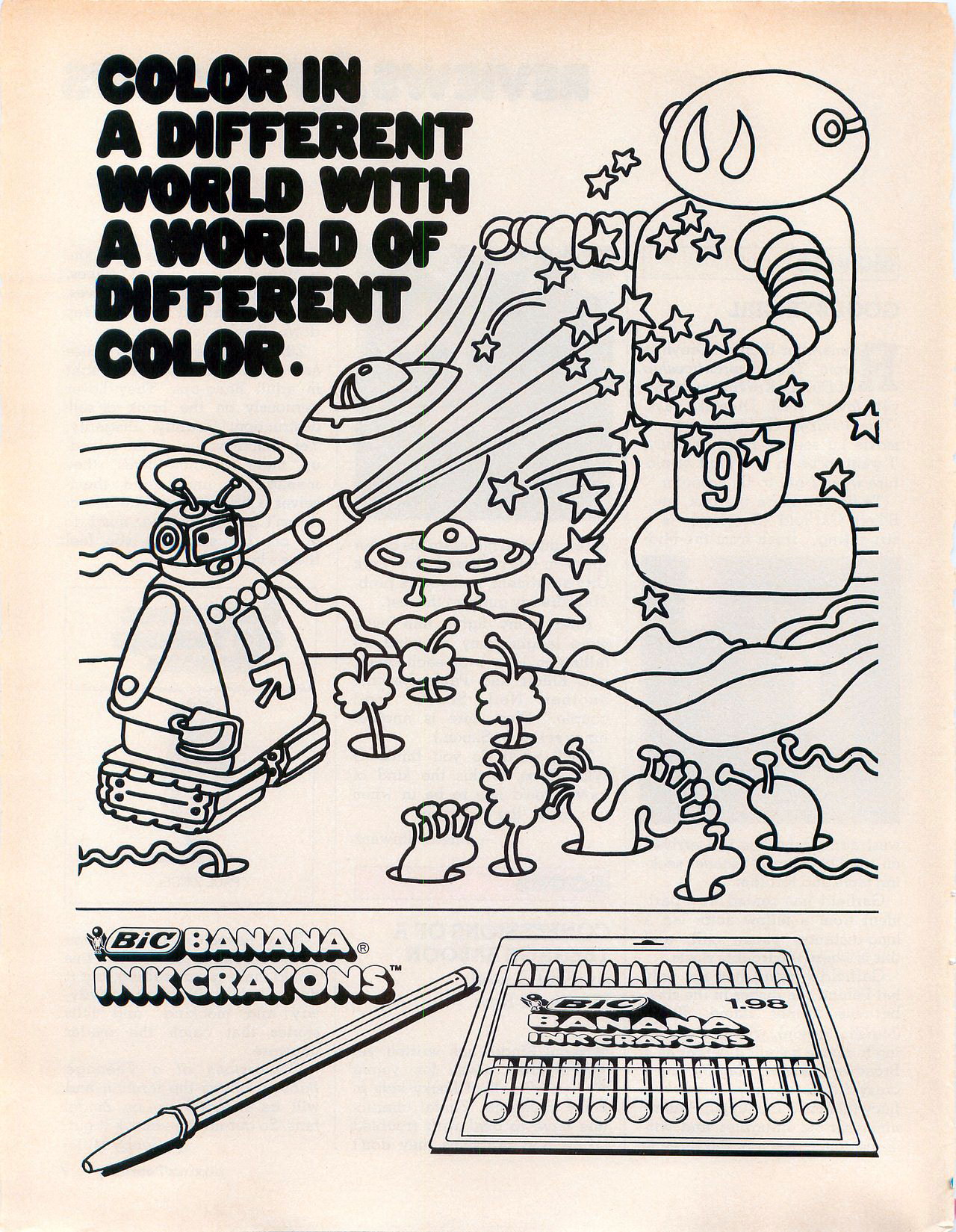 Anyone old enough to write in the 1970s will remember the Bic Banana Ink Crayons commercials featuring flamboyantly gay Charles Nelson Reilly.  Whoever thought CNR would appeal to kids was definitely smoking something, but they were memorable nonetheless. 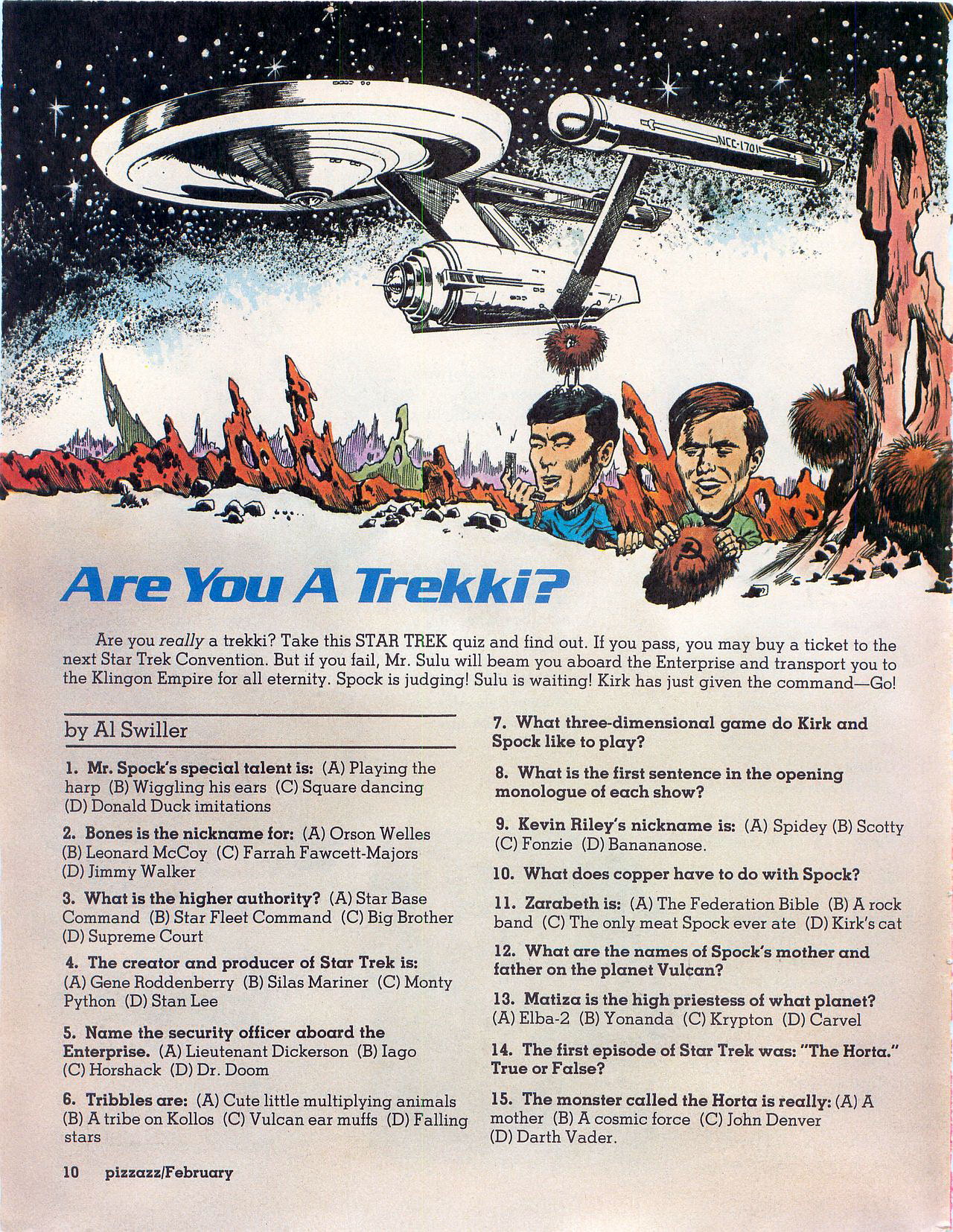 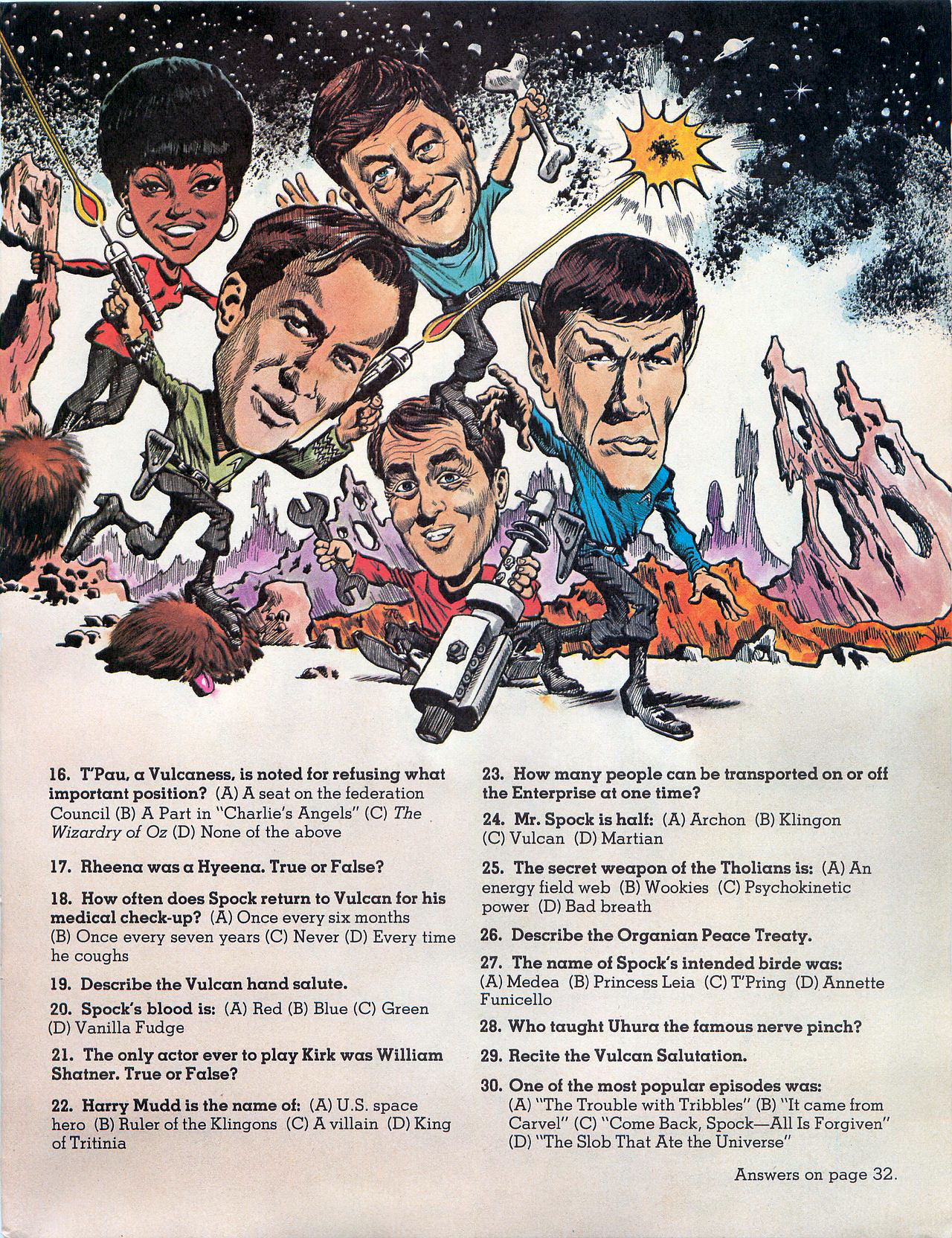 So, how’d you do?  In 1978, when this issue of Pizzazz was published, Star Trek had reached a huge level of popularity: a decade of reruns had accumulated a ton of fans, and combined with a sci-fi explosion via Star Wars had created a a perfect storm for Star Trek to ride the waves.  The following year saw Star Trek: The Motion Picture to mixed reviews. 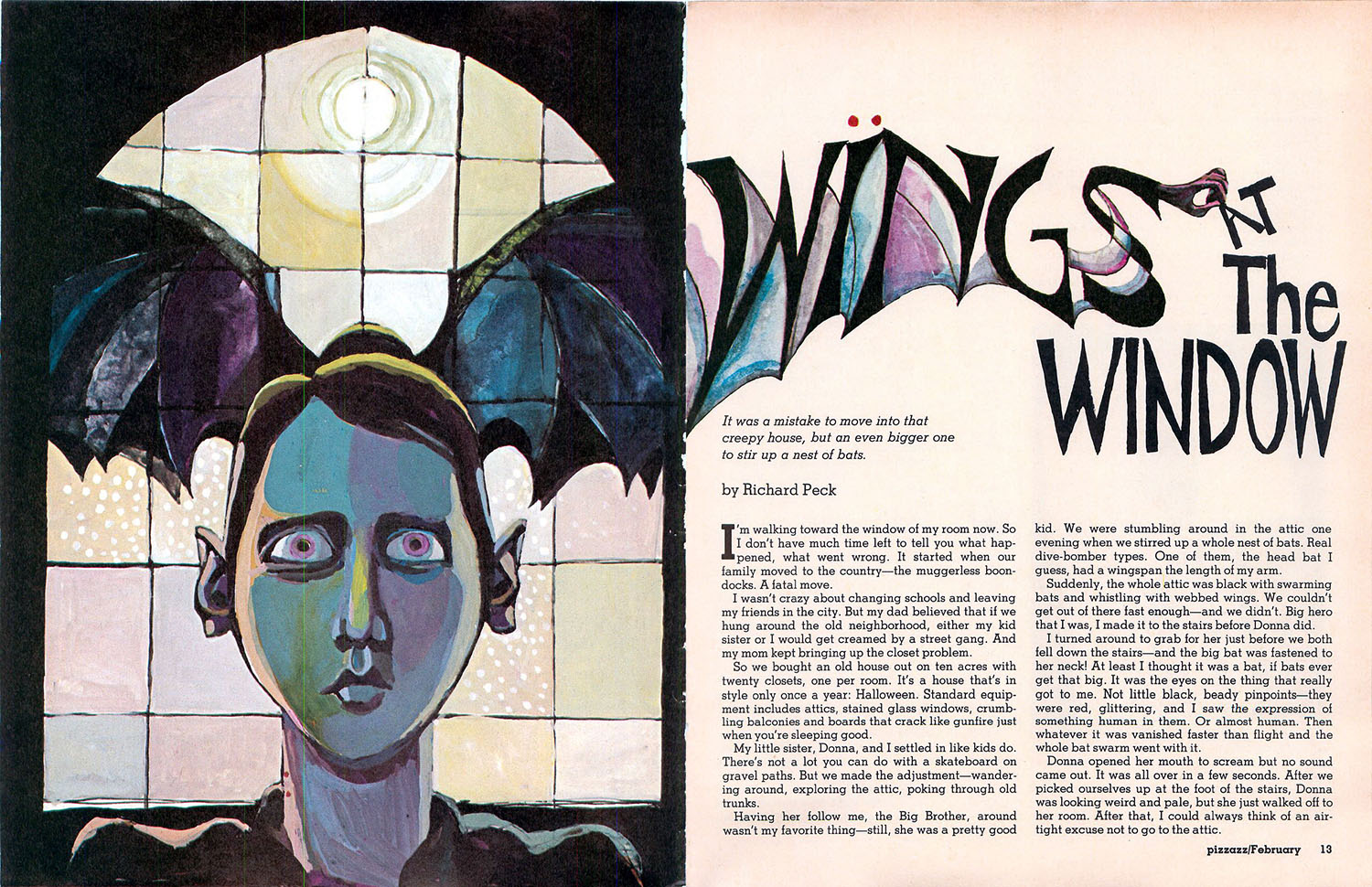 A short, surprisingly enjoyable, story about a boy whose sister gets turned into a bat.  It’s written by Richard Peck, who was quite the prolific young adult author during the 1970s; several of his works became TV movies of the day. 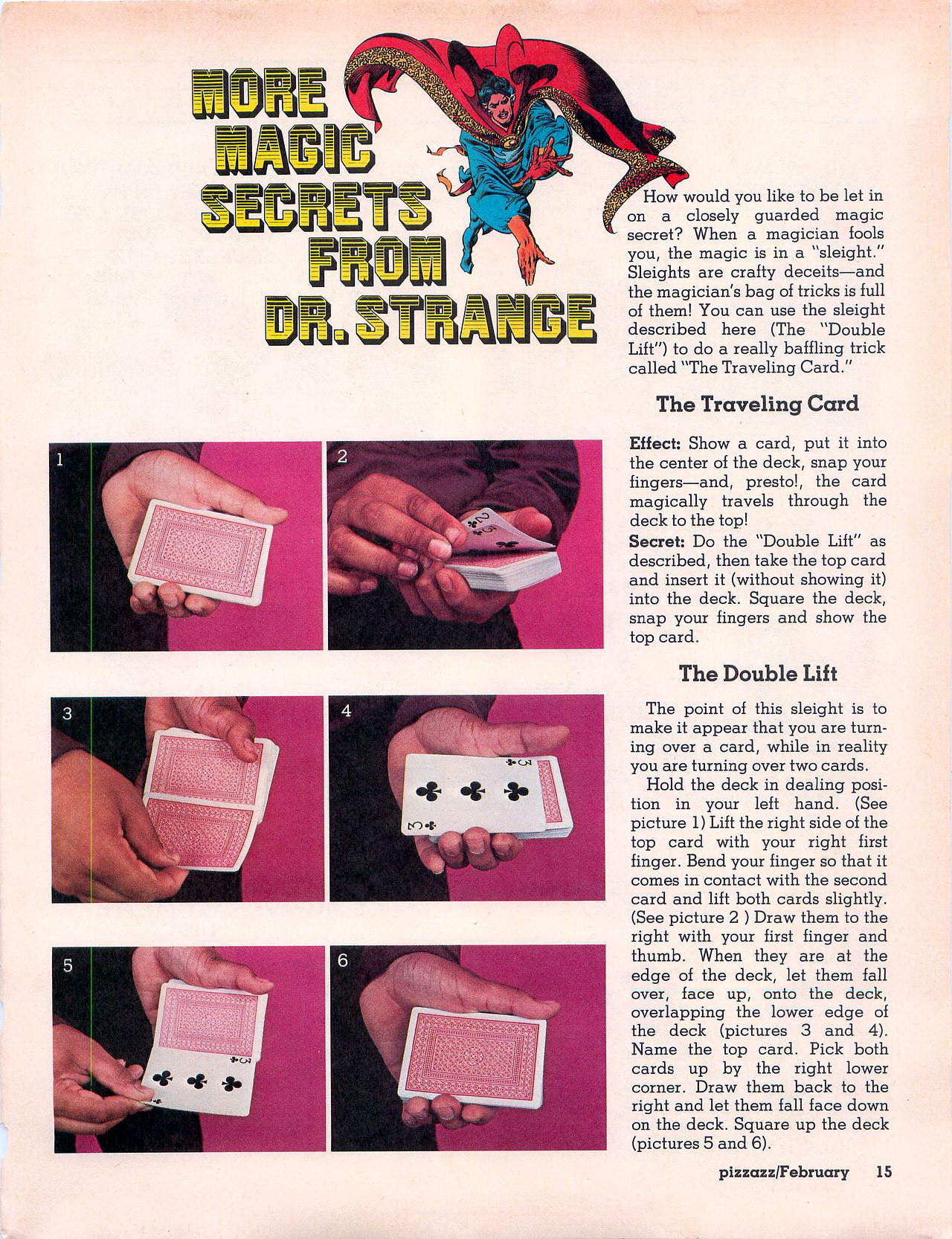 Before he was Benedict Cumberbatch, he was a Marvel hero teaching kids card tricks. 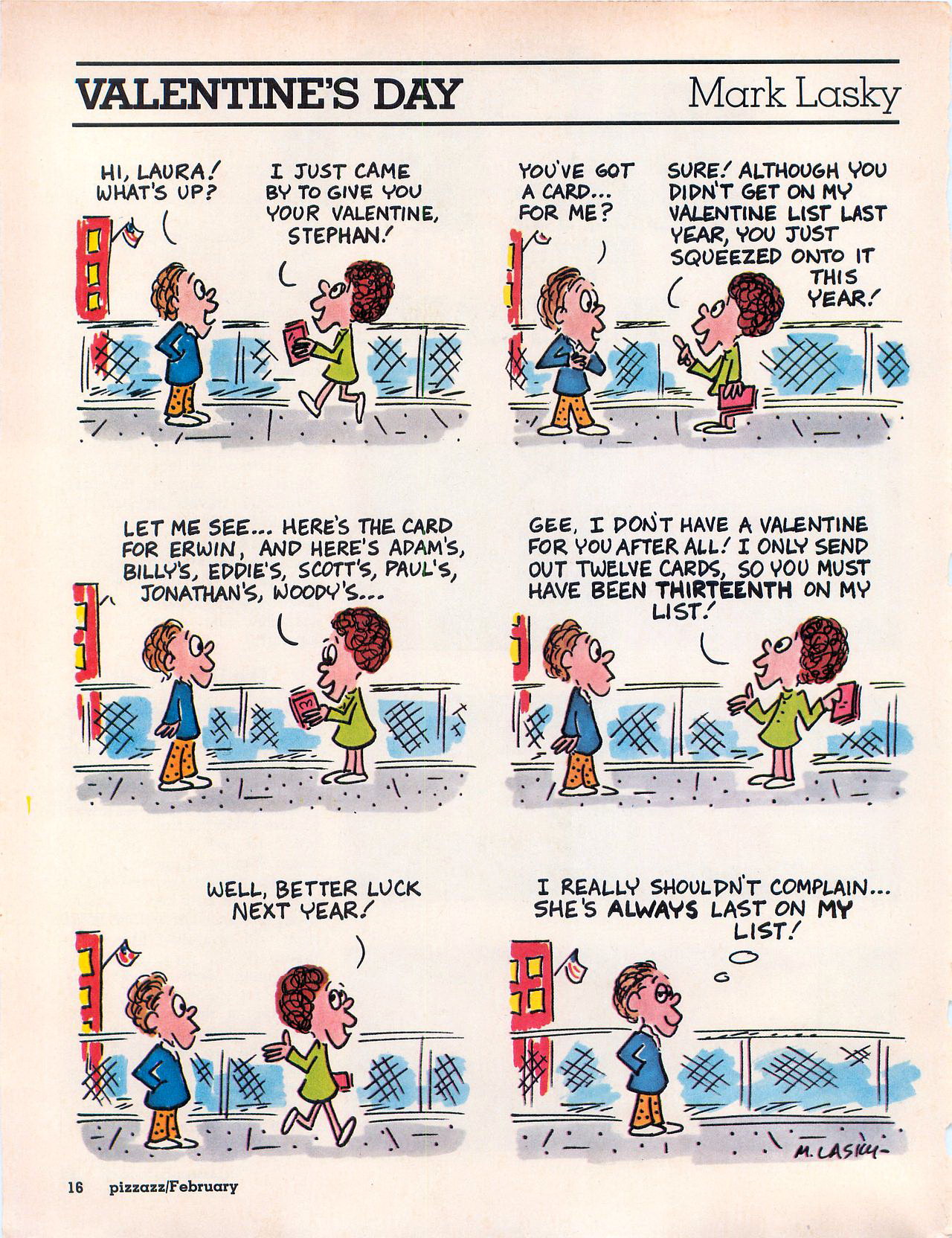 This isn’t even slightly funny.  It’s not just a bad joke, it’s so unfunny that I can’t comprehend how, in any way, this would be considered humorous.  That being said, Mark Lasky is a hall-of-fame comic artist for his work on Miss Peach and Momma, and then taking on Nancy.  Sadly, he died just four years after this issue of Pizzazz, not even thirty years of age. 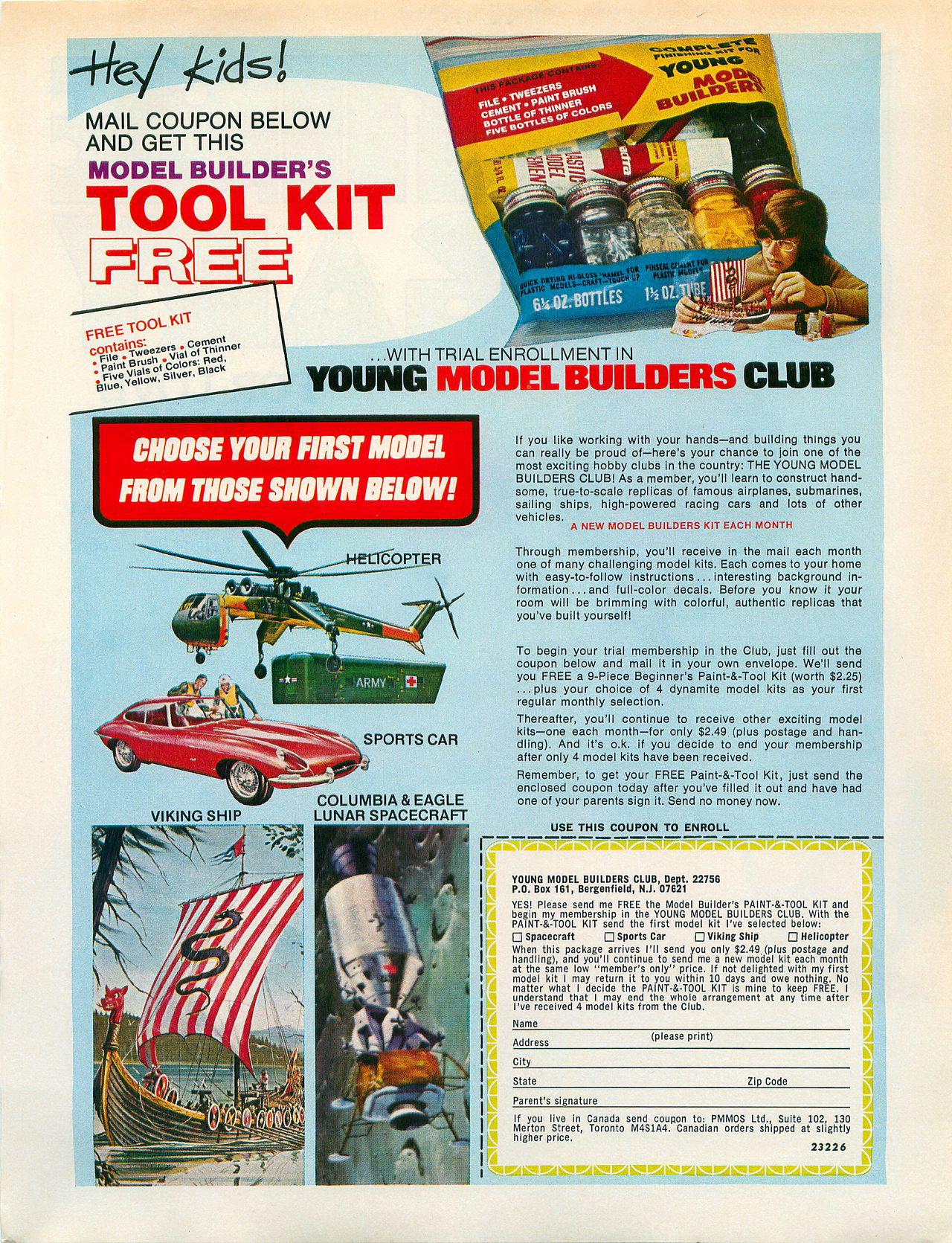 Excuse me while I sound even more like a tired old geezer: It’s really sad how “toys” like this have lost popularity.  It built patience and puzzle solving skills – and was the opposite of the short-attention-span entertainment of today…. Now, you kids get off my lawn! 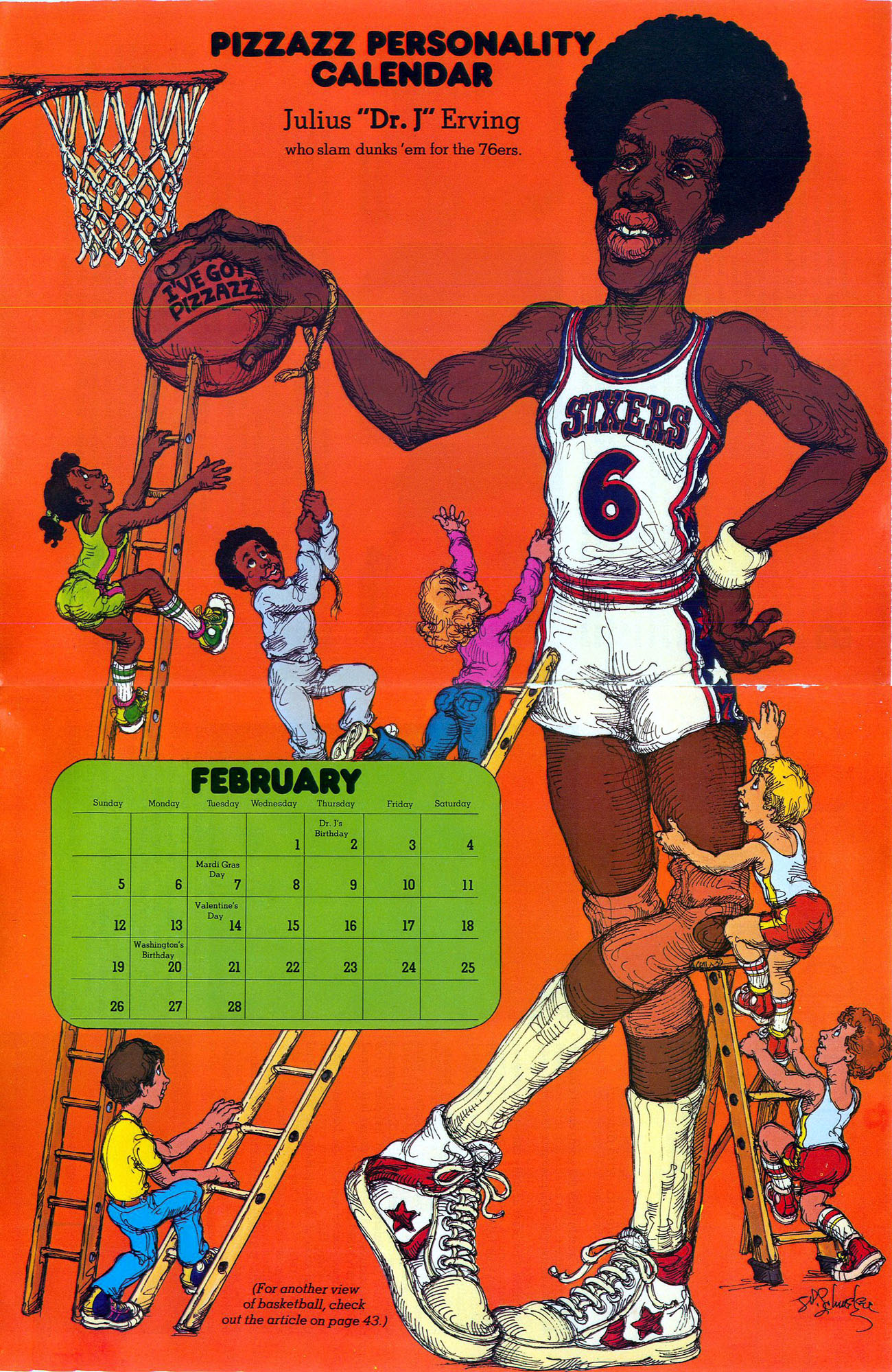 In 1978, I loved Dr. J and The Harlem Globetrotters.  In a few years, Larry Bird and Magic Johnson would take the stage.  It was a good time for basketball fans. 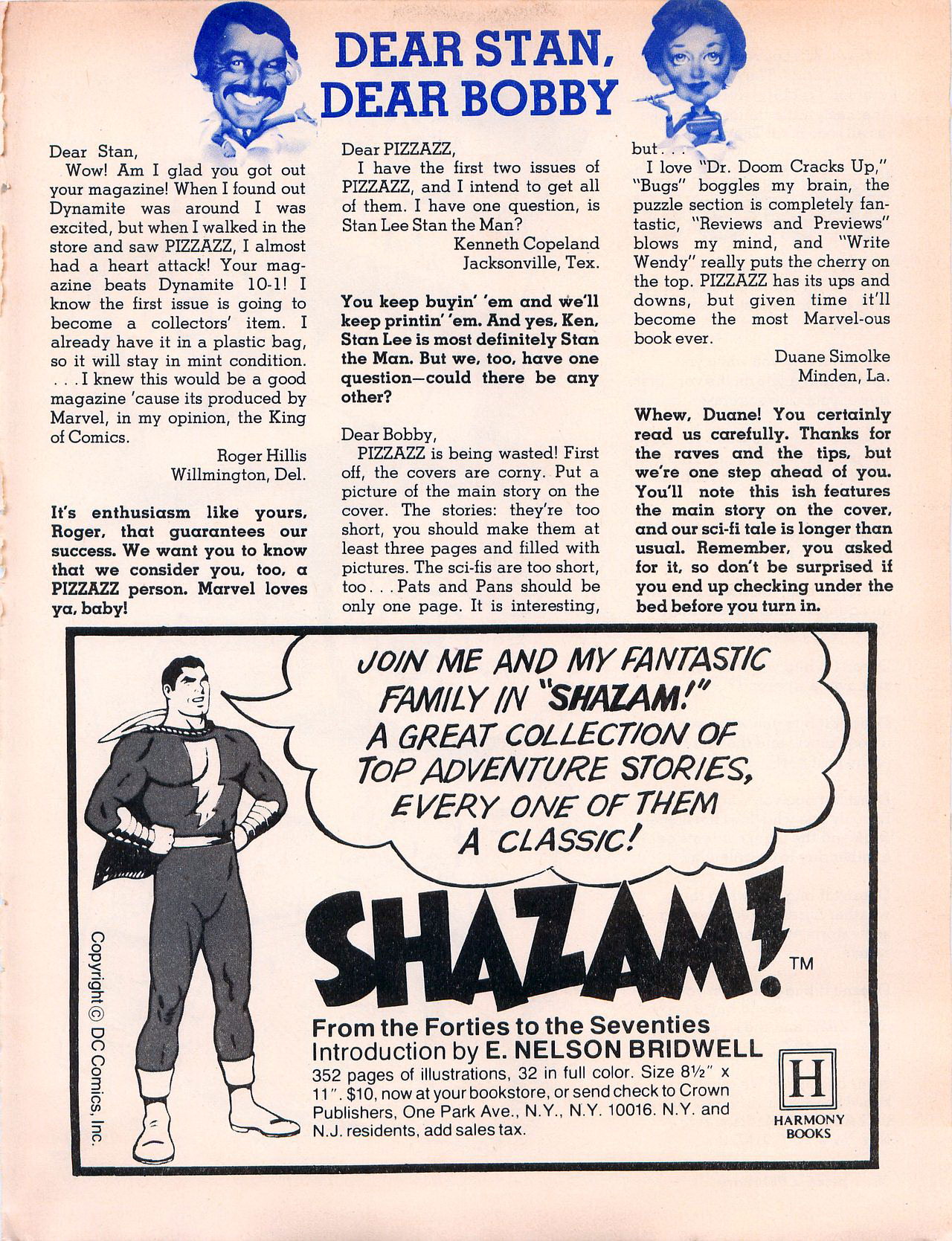 Everyone knows Stan Lee, but who is Bobby?  She’s the editor of Pizzazz, and I’m not sure what she went on to do after that.  Whatever her career path, Bobby was clearly a genius – knowing exactly what boys of the late seventies wanted to read….. including the greatest thing to ever happen to a 70s kid – Star Wars! 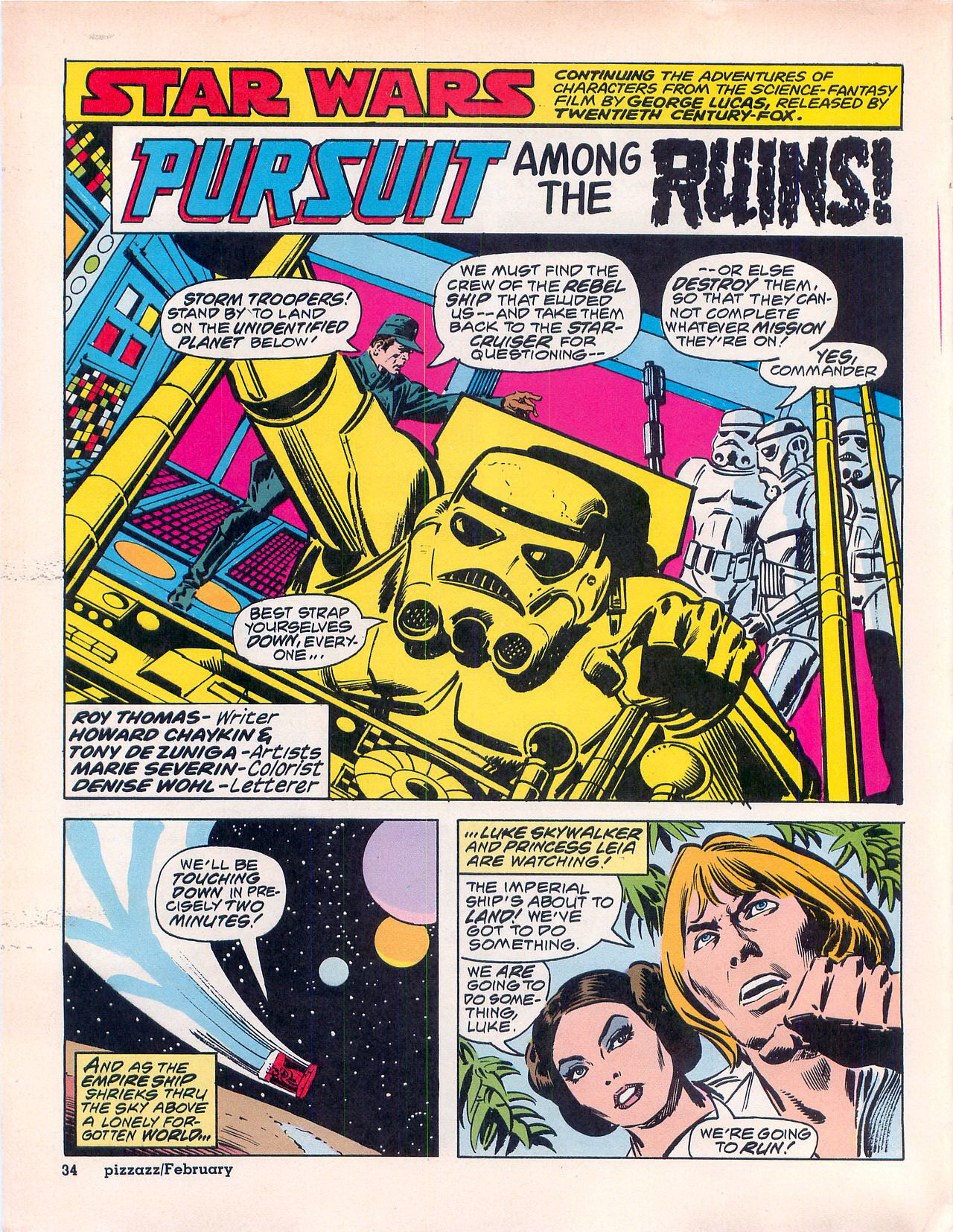 Howard Chaykin got his big break with Marvel doing Star Wars comics.  But, it was his controversial (and, IMHO genius) work on American Flagg! in the 1980s that made him a legend. 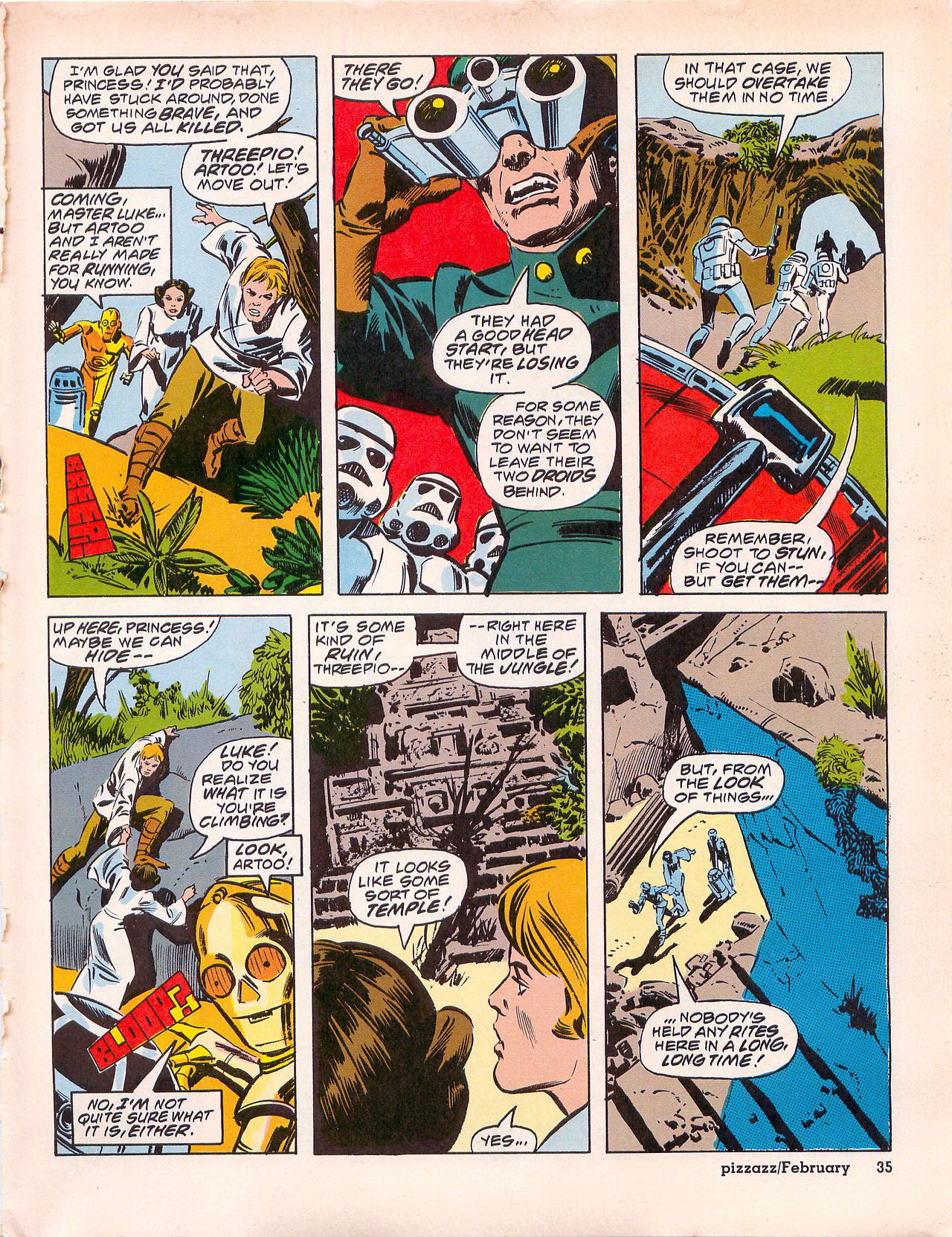 If you’ll permit me to geek out for a moment: I am wondering where Luke, Leia, and the droids have landed.  If I had to guess, it’s Yavin IV – a moon of the planet Yavin, which served as a Rebel base from which to destroy the Death Star.  Before that, thousands of years prior, it was home to the ancient Sith – whose temples still remain. 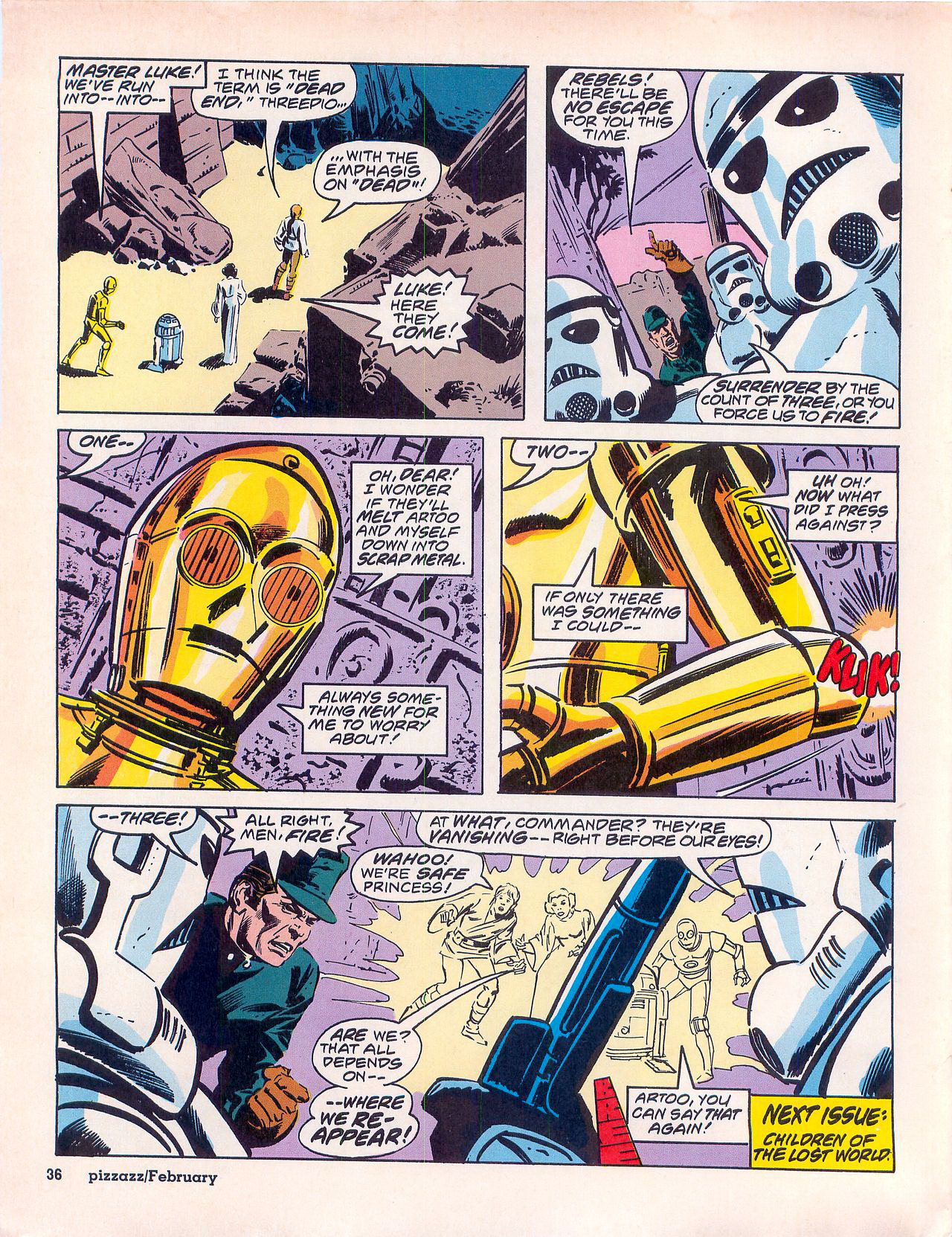 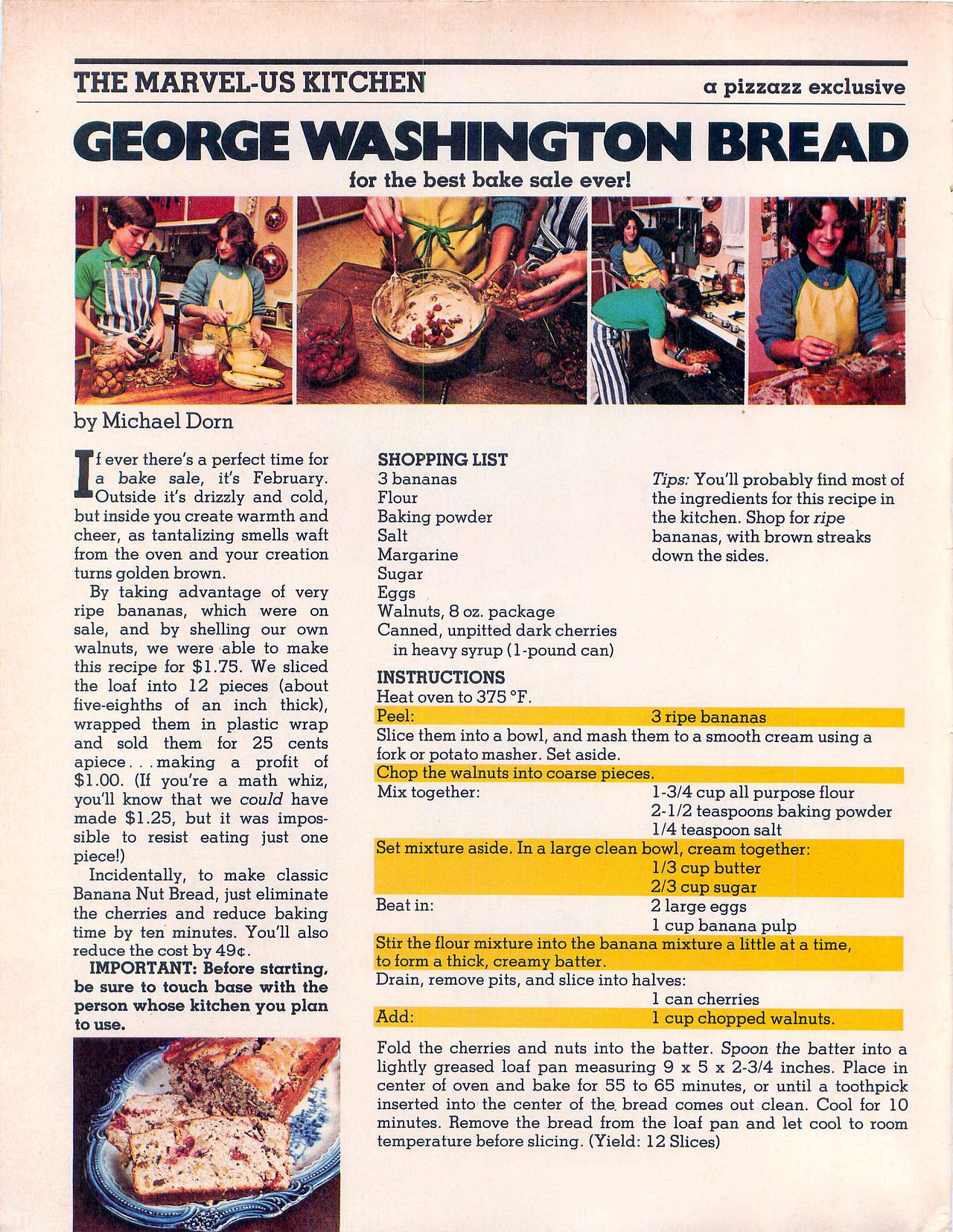 I love how they let you know you can save 49 cents by cutting out the cherries. 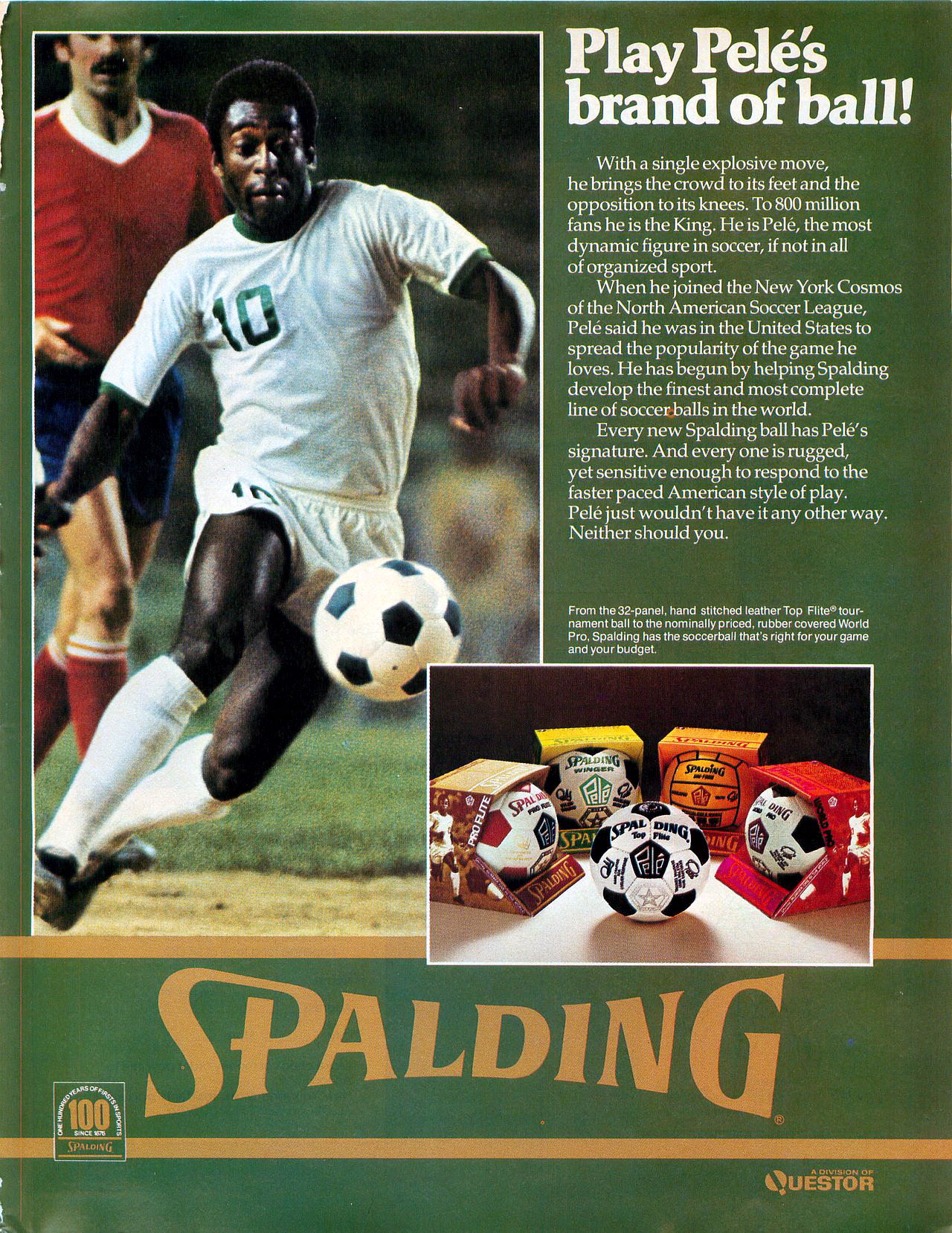 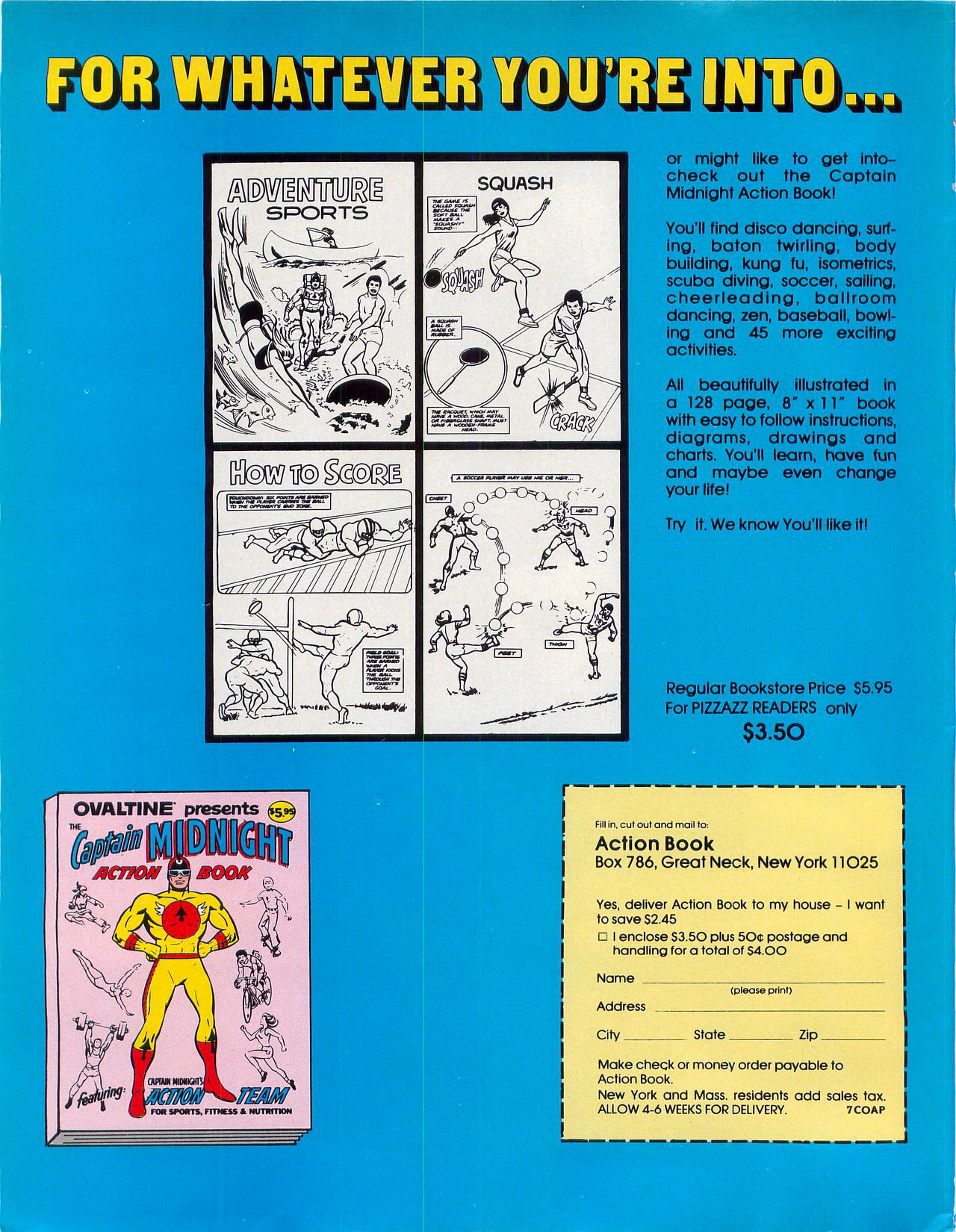 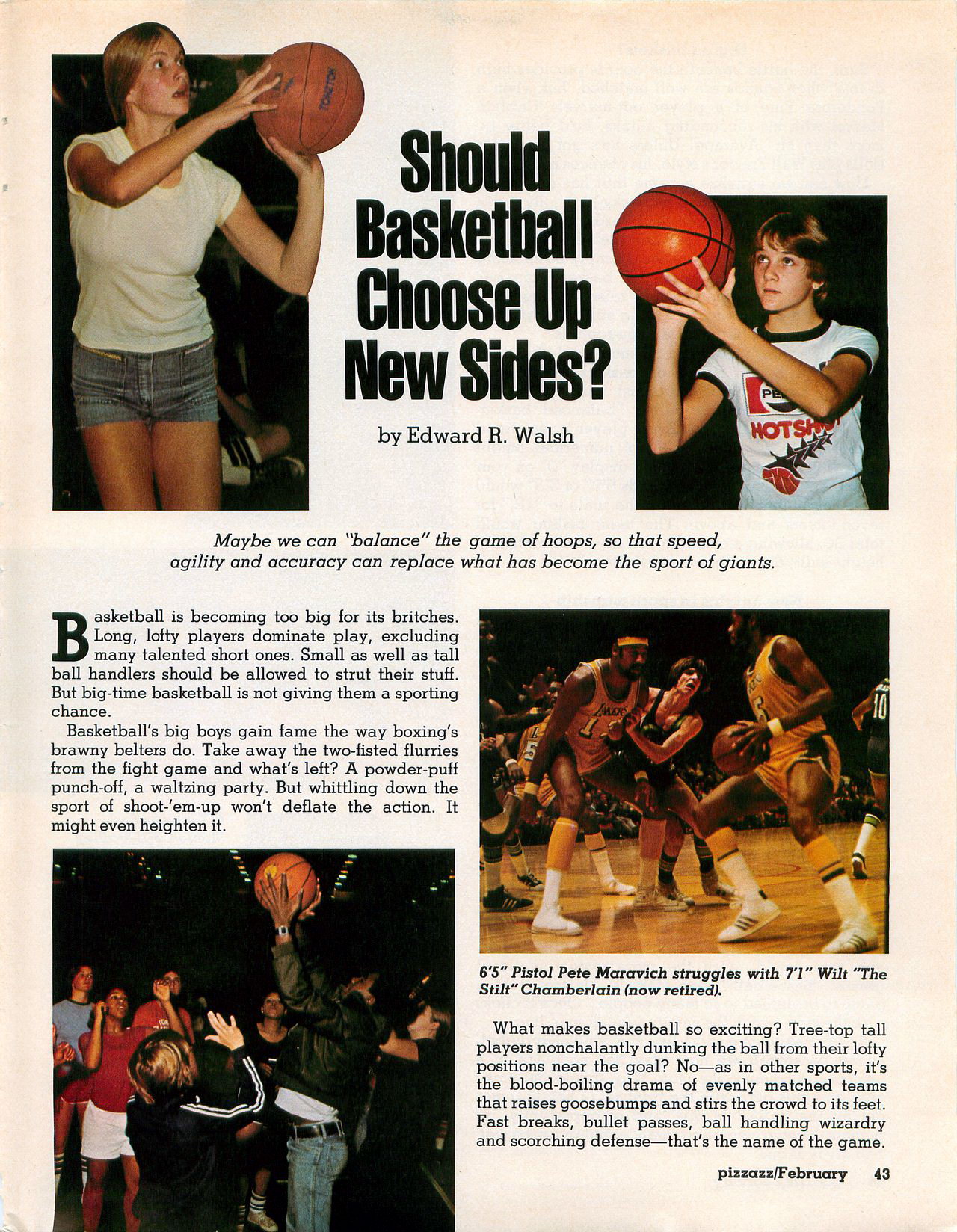 Here, Pizzazz bitches about the height advantage of players, which, according to the author, makes the game less fun.  A “balanced basketball” rule set is proposed:

Here’s how it works. Every player is registered according to a precise scale of numerical height units. If you’re under 5’2″, you’d display “0” on your jersey . Your teammate who stands 5’2″ or 5’3″ would wear height-unit “1.” So on up the scale to ” 12,” for seven-footers and above. The team ceiling would total 30 , allowing a coach to use any combination of height-units , depending on his strategy. 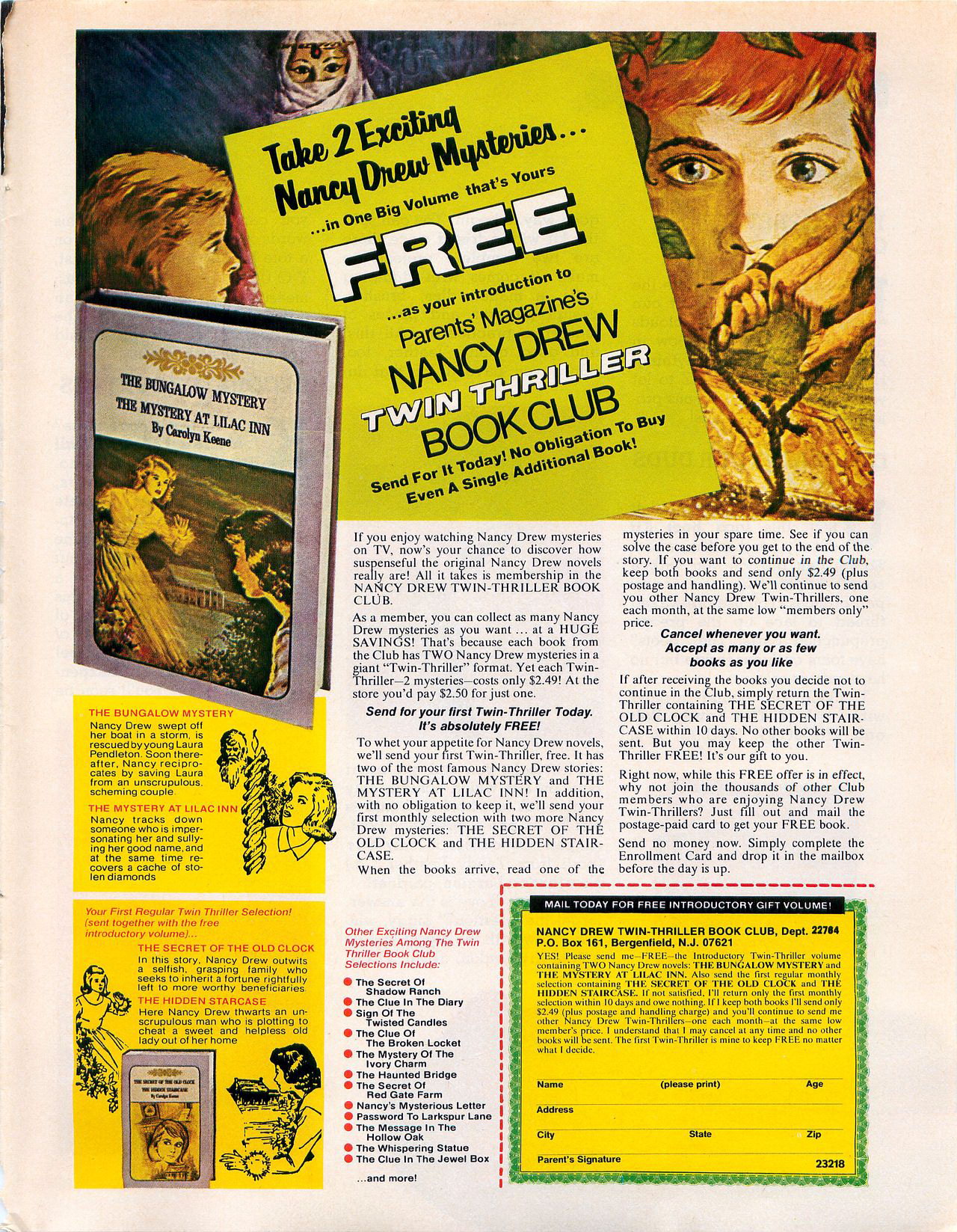 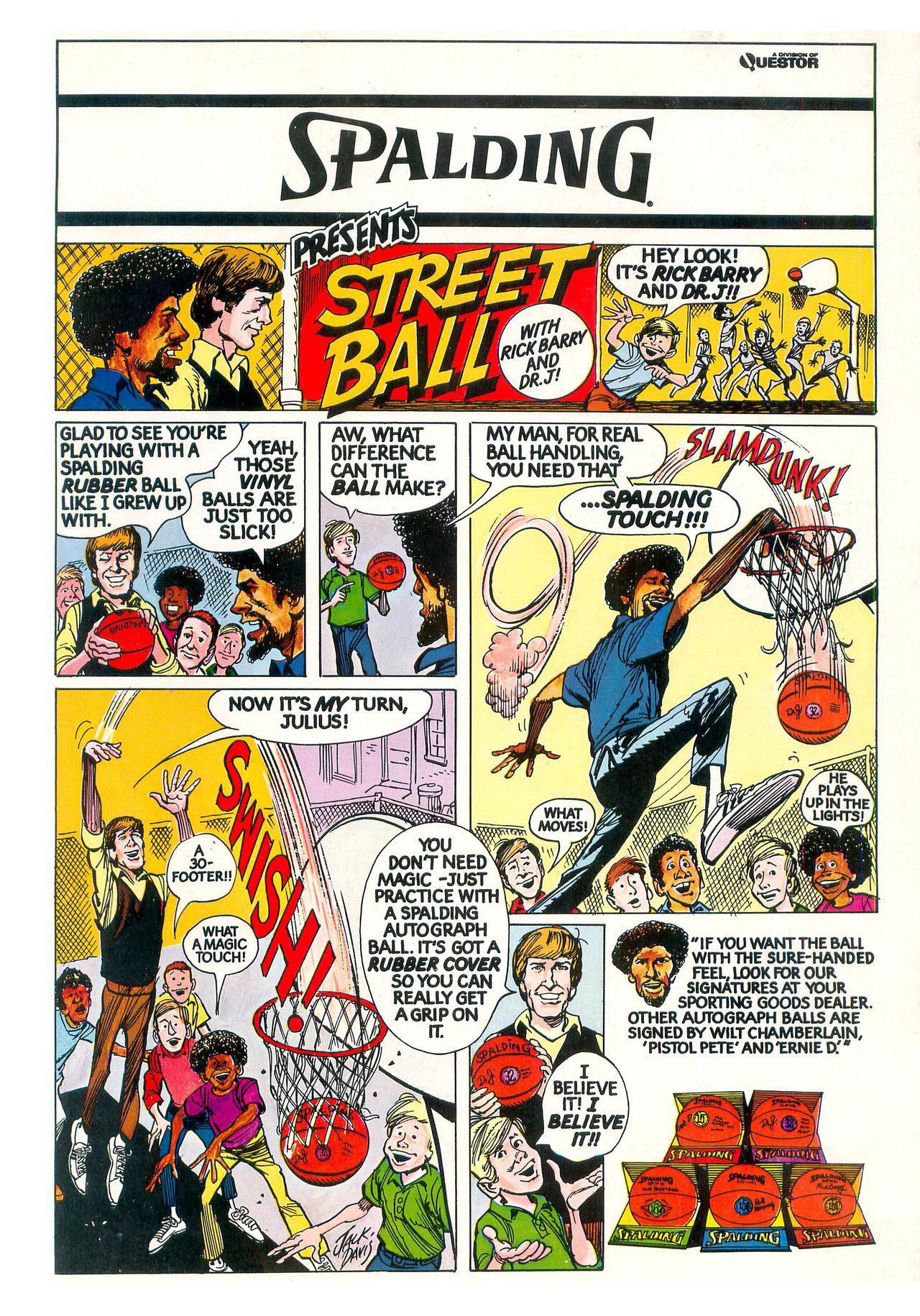 And so it ends with a Spalding advertisement that was on the back of seemingly every comic book during this time.  I hope you enjoyed our walk through Pizzazz.  I have a stack of these magazines – so, stay tuned for more in the months and years to come.  Cheers.