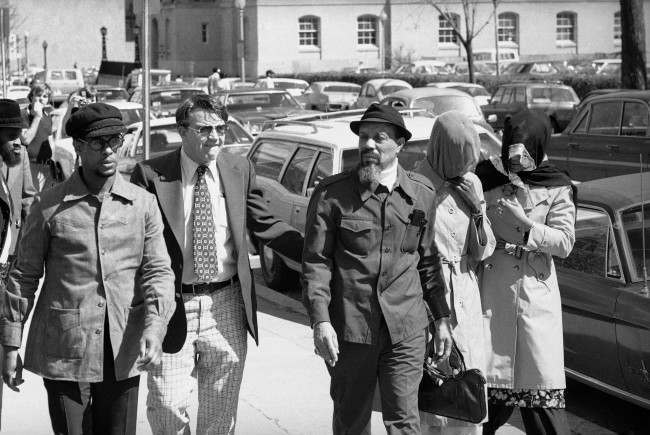 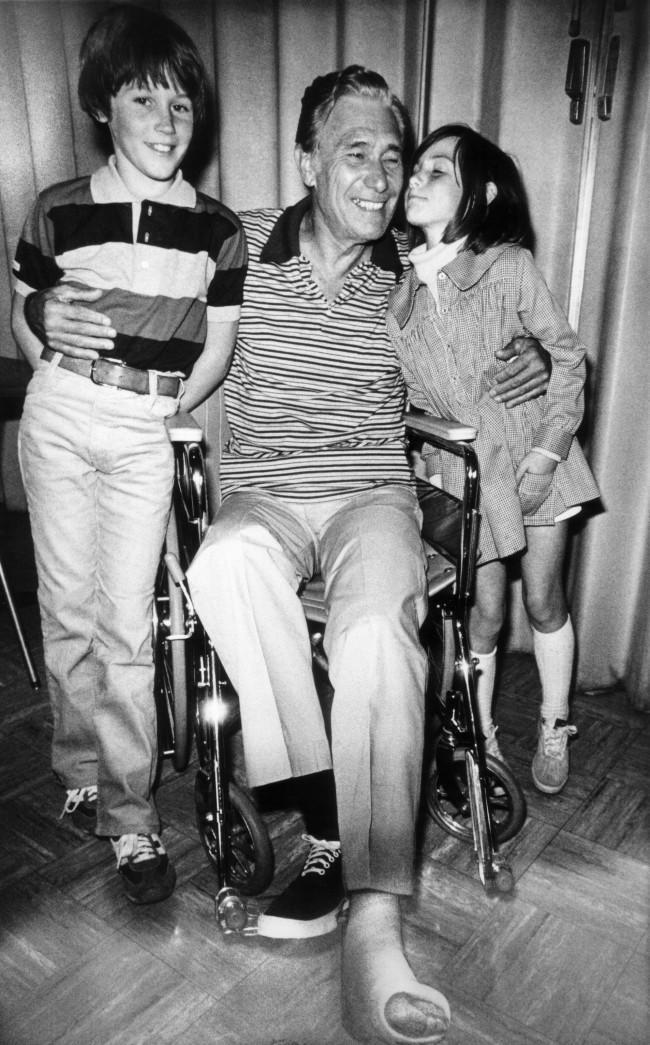 John Combs of Haleiwa, Hawaii, one of the survivors of the Pan Am-KLM crash, hugs his grandchildren after arrival at the University of California-Irvine Medical Center in Anaheim, Calif., March 31, 1977. His foot is in a cast. The children are Sean, 10, and Sabrina, 7. Combs and his wife were among survivors returned to the U.S. from the Canary Islands by military aircraft. 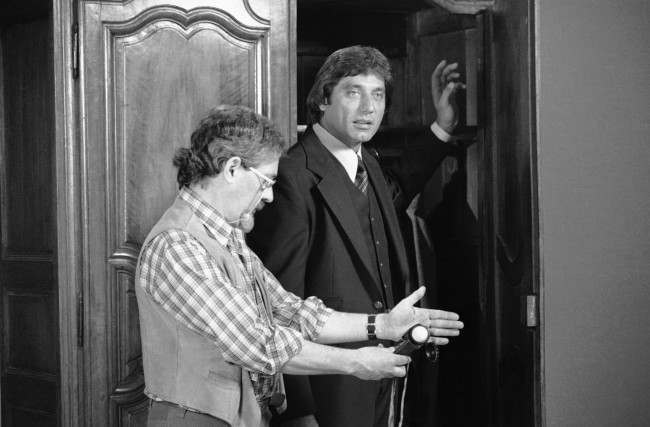 Joe Namath stands by as a technician takes a reading during the filming of commercials for “Joe Namath” clothes in New York, March 30, 1977. Namath said nothing has been settled as far as his going to the Los Angeles Rams to play footbal 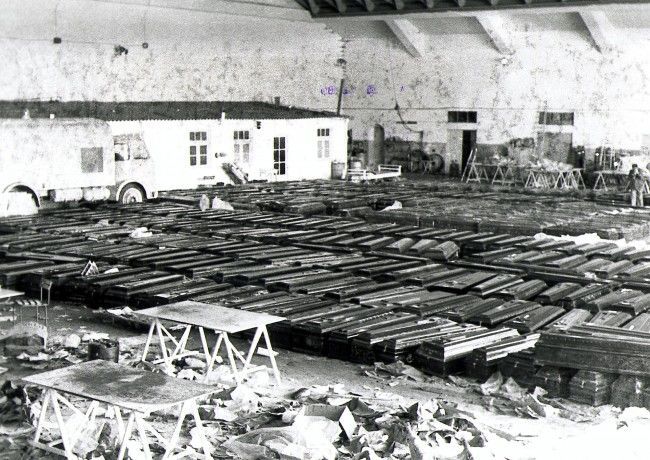 Jumbo Victims – Coffins containing victims of the world’s worst air disaster stored in a Santa Cruz airport hanger March 30, 1977, awaiting return to families of the ill-fated KLM and Panam passengers. They died Sunday Mar. 27th., when two Jumbo jets collided on a fogbound runway at the airport with the loss of over 550 lives. 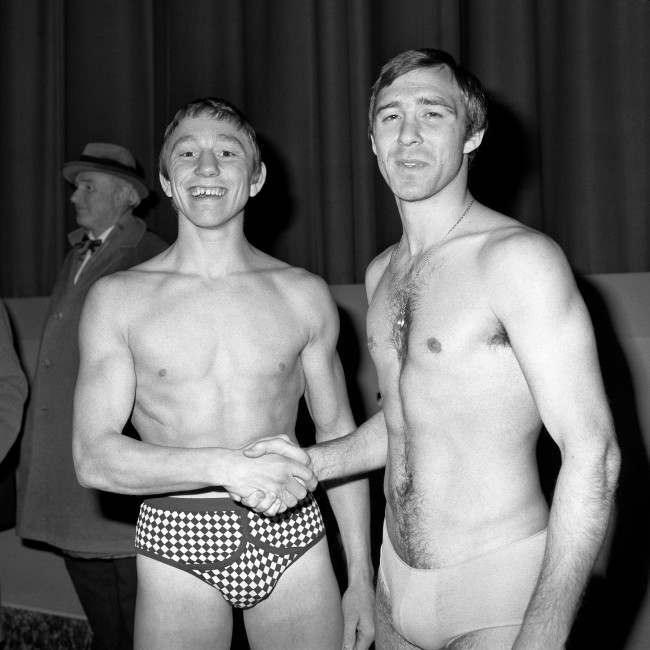 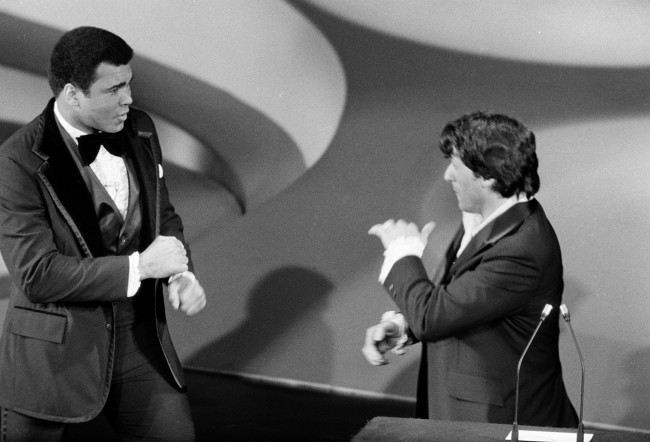 Heavyweight boxing champion Muhammad Ali, left, makes a suprise appearance on the Academy Awards show, accusing actor Sylvester Stallone in jest of stealing “my script” and then sparring with Stallone, who wrote and starred in the boxing film “Rocky,” in Los Angeles, Calif., March 28, 1977. Stallone and Ali presented the award for best supporting actress. 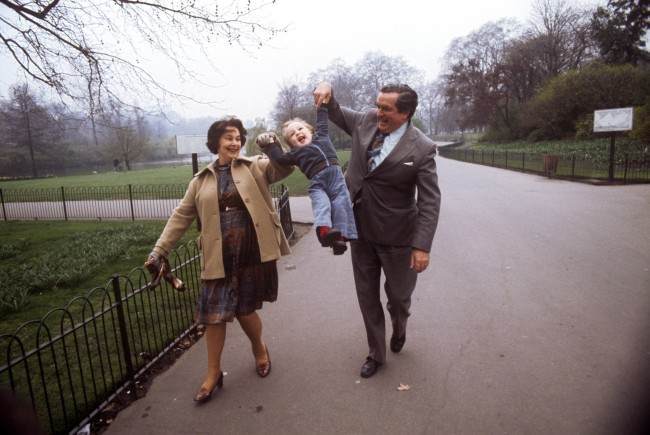 Chancellor of the Exchequer Denis Healey, taking time out from his preparations for next week’s Budget, is joined by his wife Edna and their 18-month-old grandson Thomas Copsey for a stroll in St James’s Park, London. 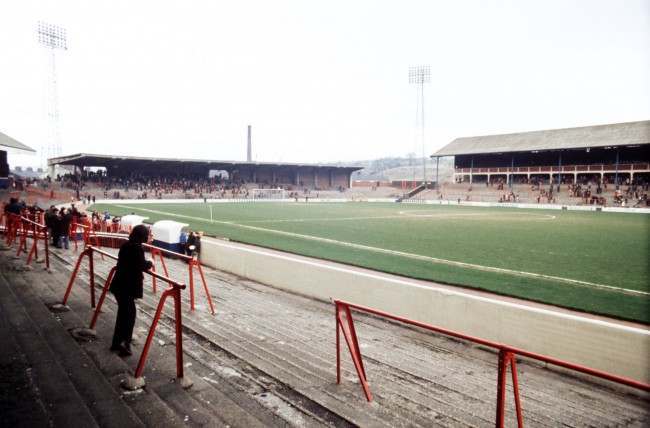 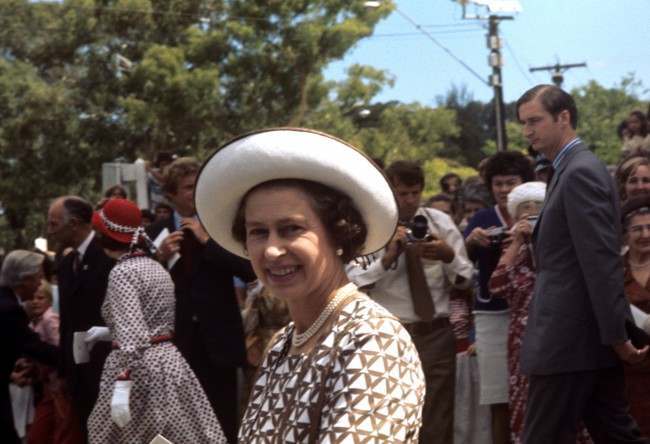 Queen Elizabeth II during her visit to Adelaide, Australia. 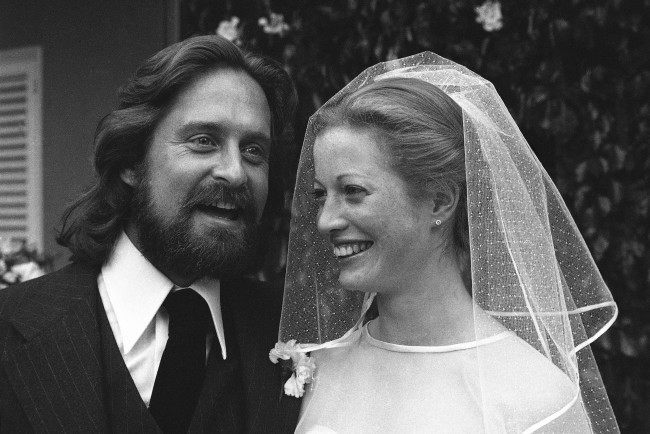 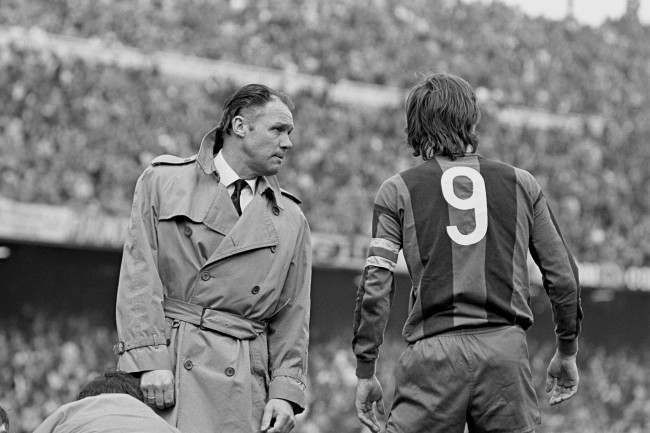 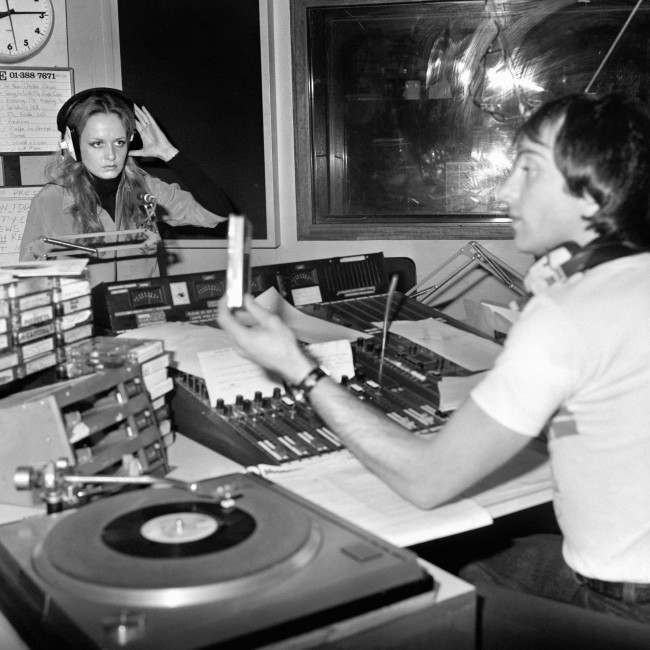 Model and singer Twiggy at the Capital Radio studios with Graham Dene, helping out on his show. 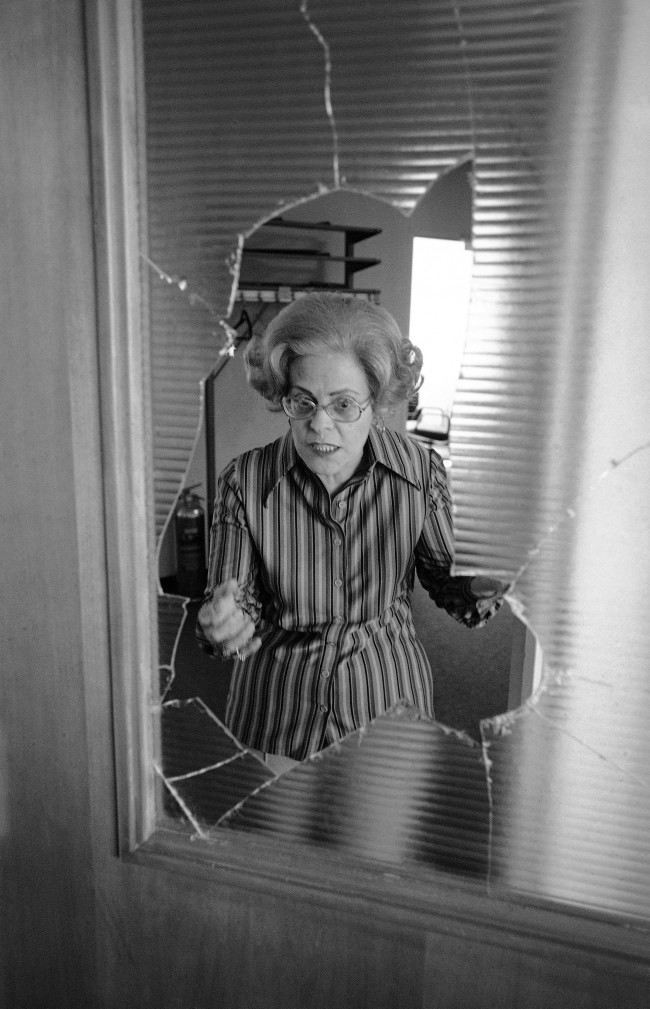 Rae Ehrlich is framed by a broken glass partition, at BÂnai BÂrith headquarters in Washington on Sunday, March 14, 1977 as she explains how gunmen broke the glass with a rifle butt and took her and others hostage. Over a hundred captives were held for 38 hours. 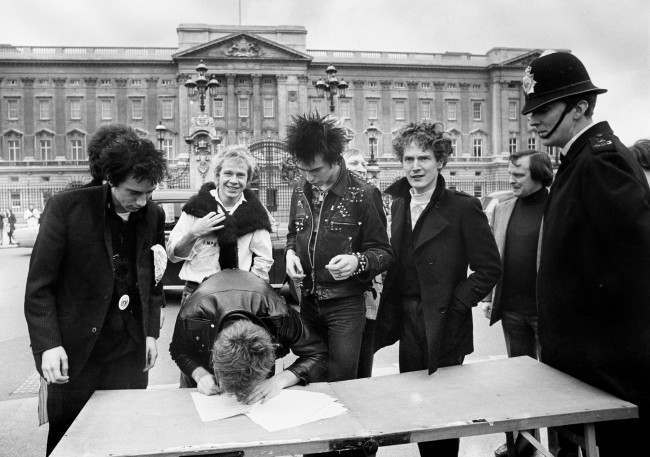 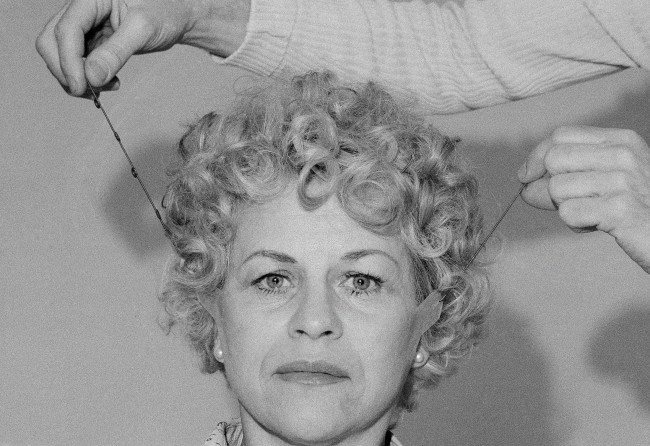 Joanne Viggiano is the model for a temporary face lift by Mark Traynor at his studios in New York on Friday, March 11, 1977. The ÂliftÂ a combination of tape and elastic cord is placed at three areas of the face – the upper forehead, in front of the ears and at the neck. 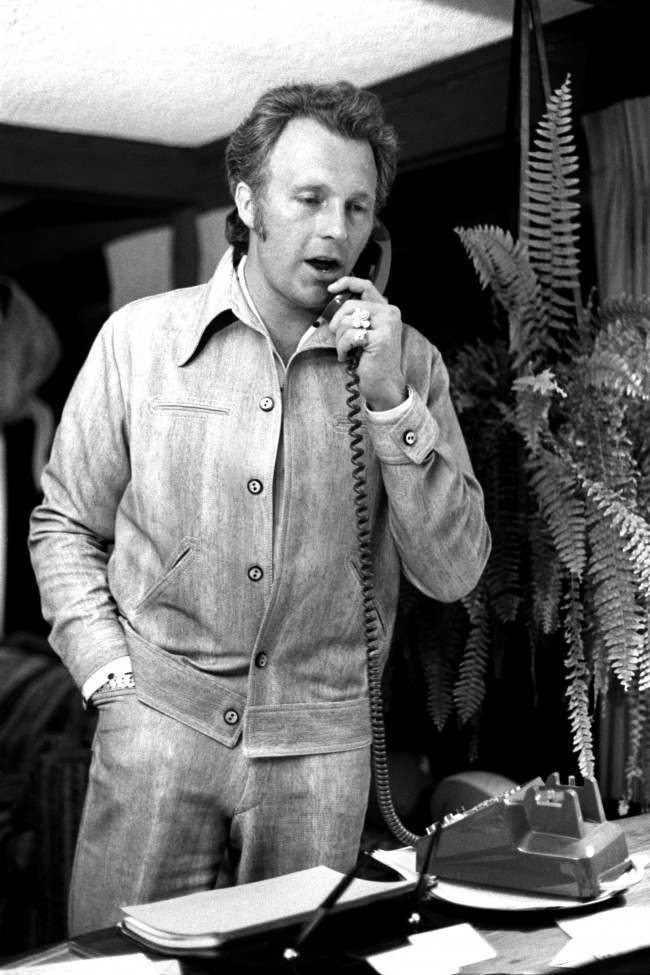 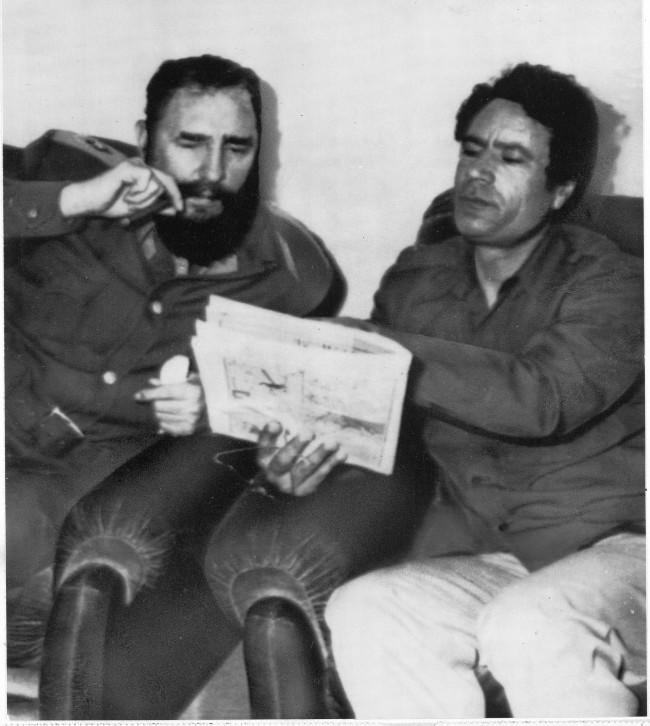 Cuban Prime Minister Fidel Castro, left, and Libyan leader Col. Muammar Gaddafi pore over a document during a meeting of delegates from both their countries in Tripoli. Castro is in Libya as a guest of the country. 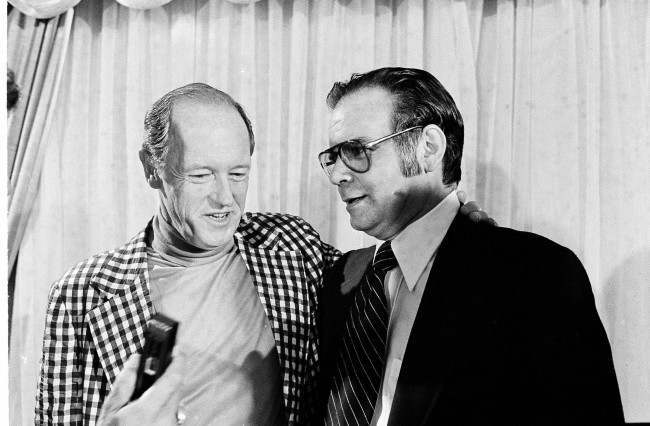 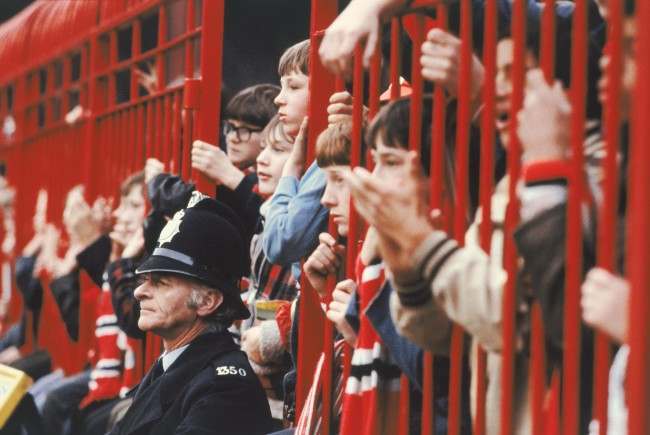