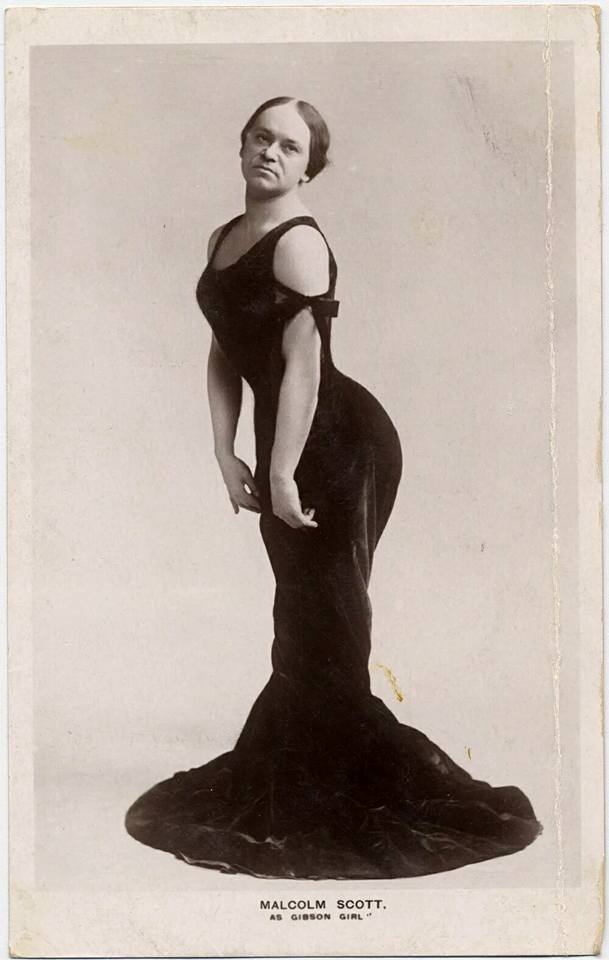 Mick Jagger once noted “Any Englishman will dress up like a woman given half an excuse.” The Rolling Stones had famously dolled-up in drag to promote their single Have You Seen Your Mother, Baby, Standing In The Shadow? in 1966. Brian Jones was by far the most beautiful, while Charlie Watts and Keith Richards looked like sex-starved maiden aunts.

But Jagger’s offhand remark touched on a truth about the long history of cross-dressing which stretches back as far as Greek and Roman times – when drag was used by actors to play female roles, and was also commonly the preferred code of dress for young male prostitutes seeking trade. 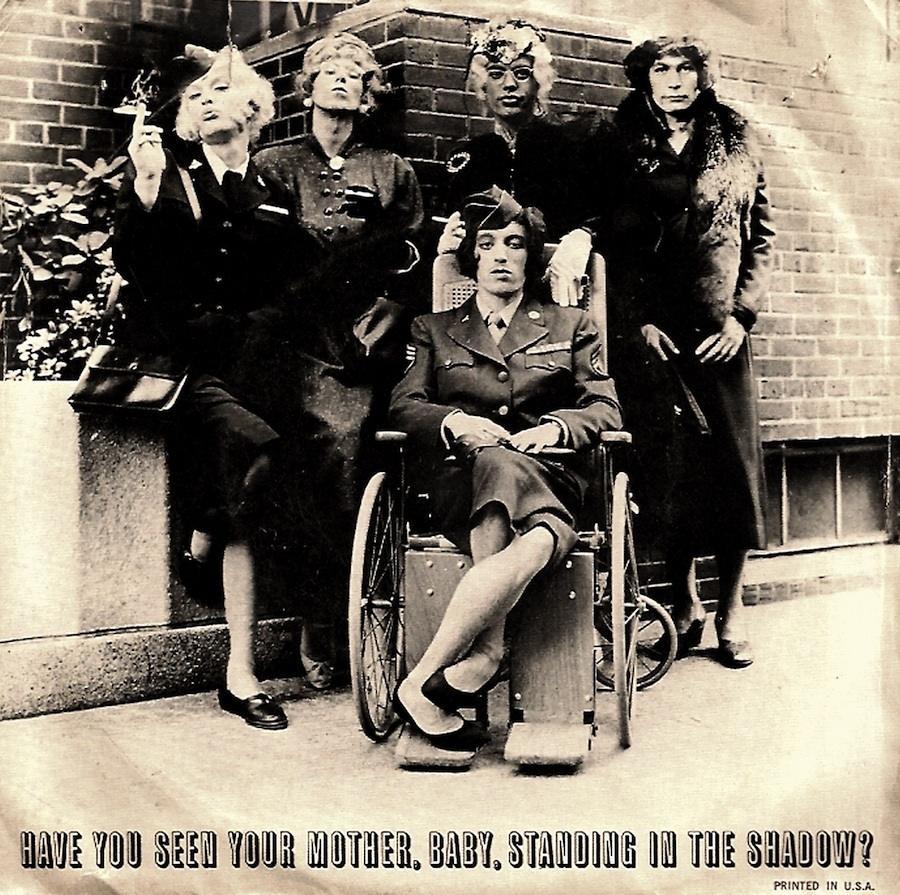 In Elizabethan England, young actors continued with the tradition of drag when playing female roles as both the Church and society at large considered it immoral for women to be seen on the stage–lest they be considered harlots.

By the Victorian era, women were rightly sharing the limelight in theatres and music halls, but still drag was a highly popular form of entertainment – both on the stage, at the circus where some acrobats donned drag to make their high-wire and trapeze acts look more daring, and in certain private gentlemen’s clubs, where snub-nosed young boys plied their trade in London’s molly houses, or trolling Lincoln’s Inn, St. James Park and the path of the City’s Moorfields – better known as “Sodomites Walk”.

Among the most famous drag artistes of the day were two young men known as Fanny and Stella, who were arrested in their finery after attending the Strand Theatre in 1870 after causing havoc by outrageously flirting with the men in the audience. 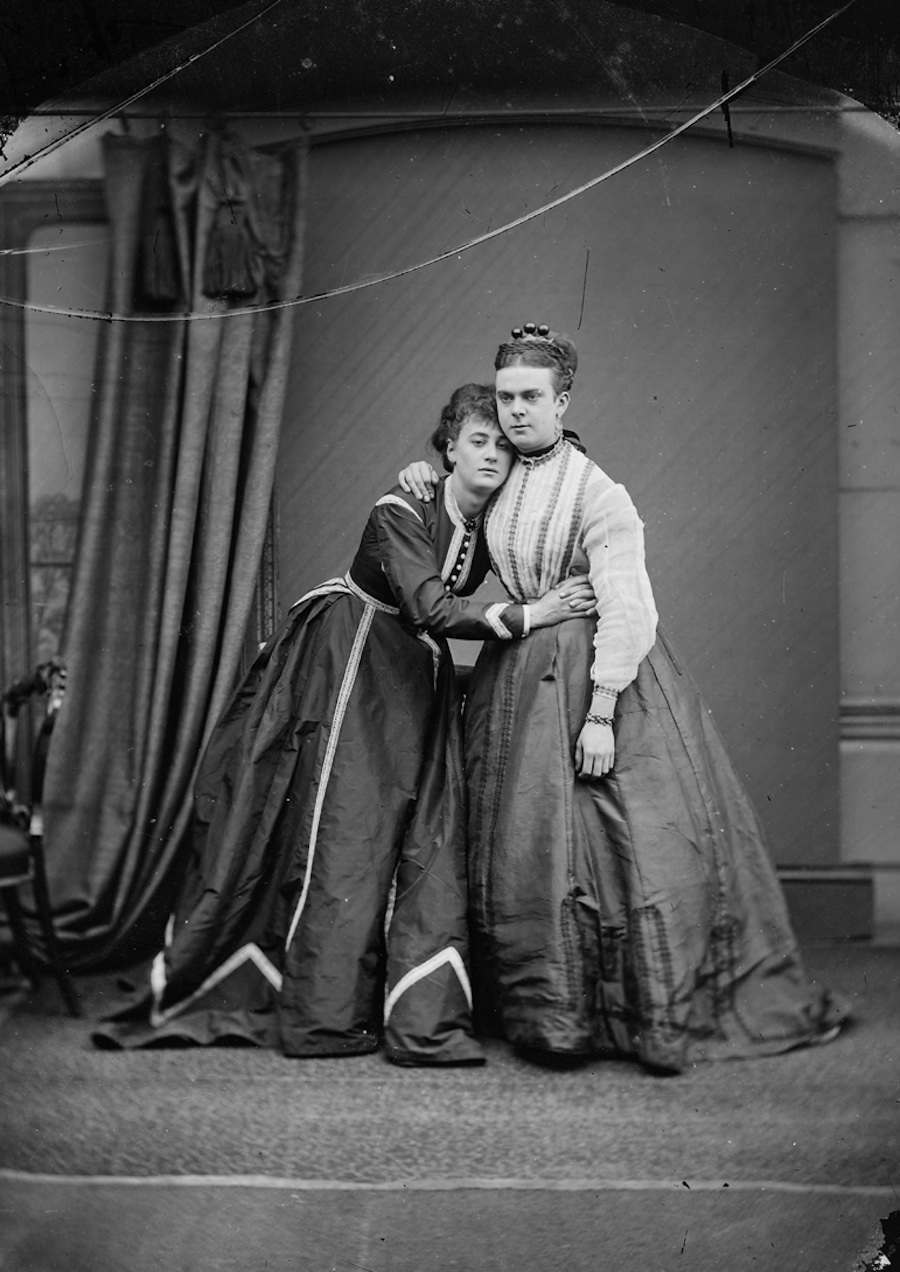 But it was in the theatre, music hall and vaudeville where drag flourished most publicly and spectacularly. Female impersonators such Francis Leon in America, and comedians such as Dan Leno in England were nationally famous for their drag acts. 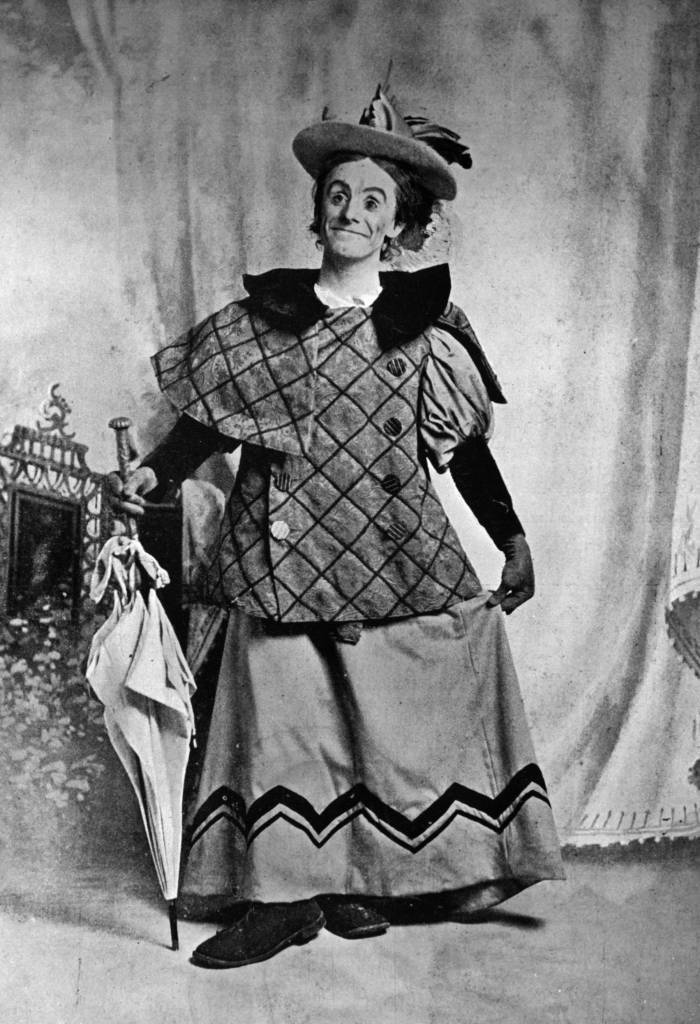 1896: Dan Leno as the ‘Baroness’ in the pantomime ‘Cinderella’ at Drury Lane theatre, London. Dan Leno was an English comedian, and pantomime artist also famous for his clog dancing. (Photo by Hulton Archive/Getty Images)

Among the many performers famed for their act as a female impersonator was Malcolm Scott (1872-1929) – perhaps better known today as the brother of the legendary explorer Scott of the Antarctic. 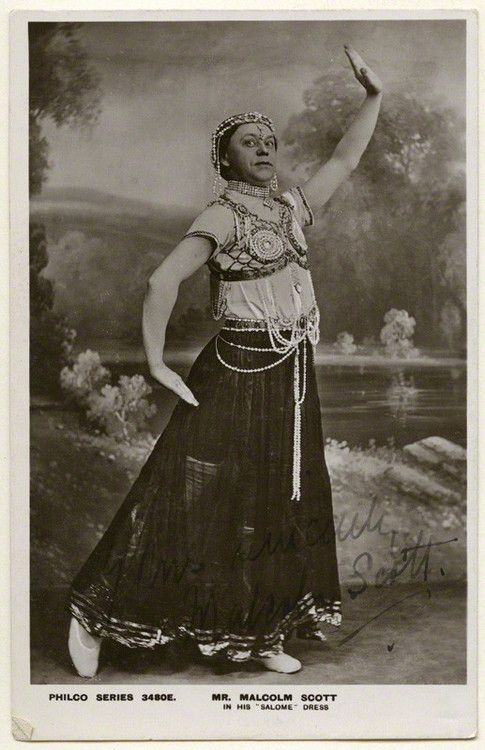 Malcolm started out as a regular actor in rep. working his way up the bill – from spear carrier to walk-on butler, and alike – until – around when his brother Robert Falcon Scott was becoming a national hero by making his first expedition to the Antarctic in 1901 – Malcolm discovered his talent as a female impersonator. He then travelled the length and breadth of the country knocking them for six with his comedic performances as “The Woman Who Knows”, Nell Gwyn, Boudica, and the epitome of femininity the fabled “Gibson Girl”. 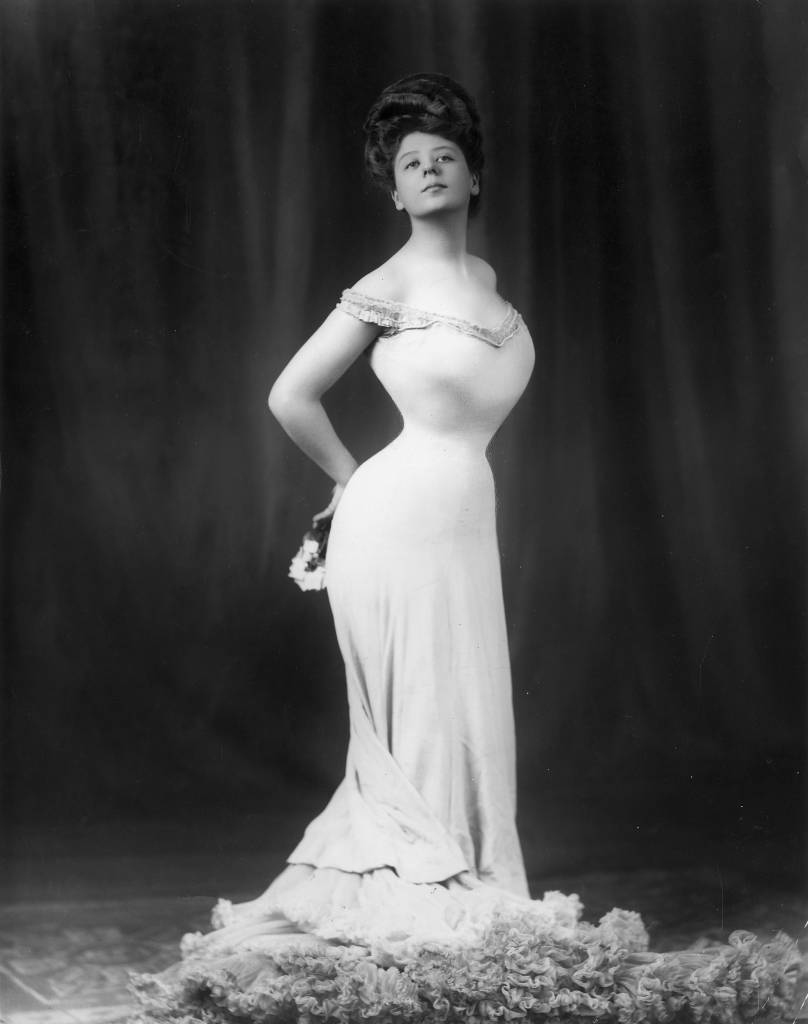 By the time of his brother’s second ill-fated trip to the Antarctic, Malcolm had moved to America where he was shaking his little tush in vaudeville.

Lupino Lane, the silent movie comedian, dubbed him “one of the most brilliant performers of his time.”

Scott’s August 1909 debut at The American Roof Garden at Eighth Avenue and 42nd Street, New York City, was reviewed in the New York Dramatic Mirror (via The Encyclopedia of Vaudeville, by Anthony Slide):

“Creeping upon it stealthily as the usual Salome approaches the head of John the Baptist, Scott makes sure of its identity then breaks forth into a mad, whirling dance of joy, throwing himself upon the object of his affection [a large bottle of whiskey] and hopping ecstatically about. Nothing funnier than this moment has been seen in a New York vaudeville theater. The burlesque is pure artistry, subtle and screamingly funny.”

Scott later embarked on tours of South Africa and Australia, before returning to the US.

In 1913, Malcolm wrote and starred in the comedy short How a Housekeeper Lost Her Character. The film, directed by Fred Rains, was the first production by The Magnet Film Company, which would later that same year produce Marie Lloyd at Home. Alas, IMDB offers little information further than its title and star, but I would hazard a guess Malcolm played one of his famous female characters.

A further review, this one from The Glasgow Herald (Dec 12, 1922) points to Scott the showman:

“Music Hall audiences, of course, know him a female impersonator, but on the slightest provocation he will turn aside to tell you about an eventful visit to Australia, the adventures of a member of Parliament, or how the dentist treated him. One laughs at most of the travelogue.”

The National Portrait Gallery has five publicity photographs on Malcolm Scott but the briefest of biographies:

Scott died in 1929 at The Pines in Burgess Hill, Sussex, an apparent cancer victim. His obituary appeared in The Glasgow Herald, Sep 7, 1929, recalling his early morning walks home after late-night parties, often in the company of fellow actor and occasional female impersonator George Mozart:

“Mr Scott was a man of great generosity, and at one time it was his habit to purchase the stocks of coffee stalls on The Embankment and other parts of London and give away refreshments to the poor without disclosing his identity.”

What else we know is sketchy. Perhaps you can help produce a more full tribute to Malcolm Scott?