In 1945, Britain, as well as the rest of the world, was recovering from six years of war. You’d think that the last thing the country’s weary population would have on its mind would be football. You’d think wrong. 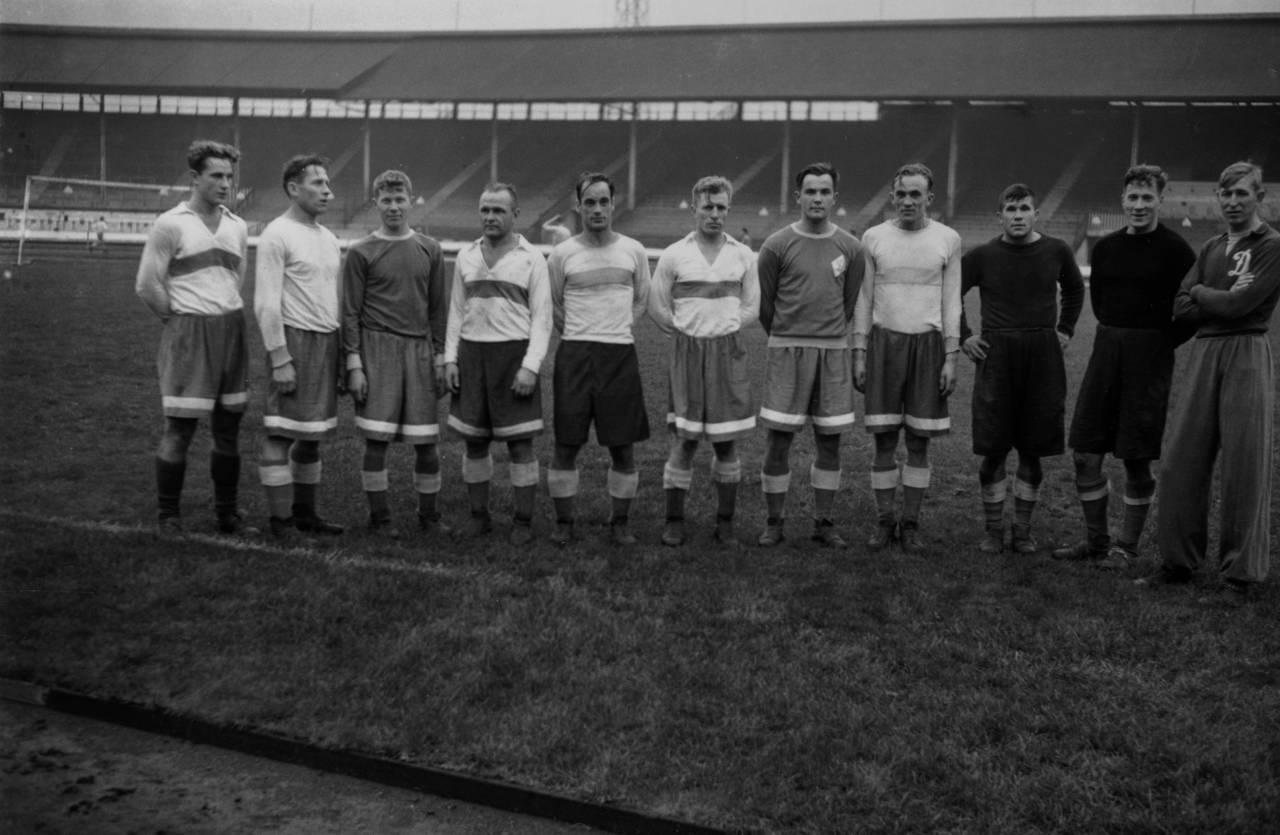 Starved of proper football for six years, and with admiration and gratitude for the Soviet war effort still strong, the news that the famous Dynamo Moscow – or Moscow Dynamo, as they were known then – would be playing a series of friendlies in Britain in 1945 sparked huge excitement. 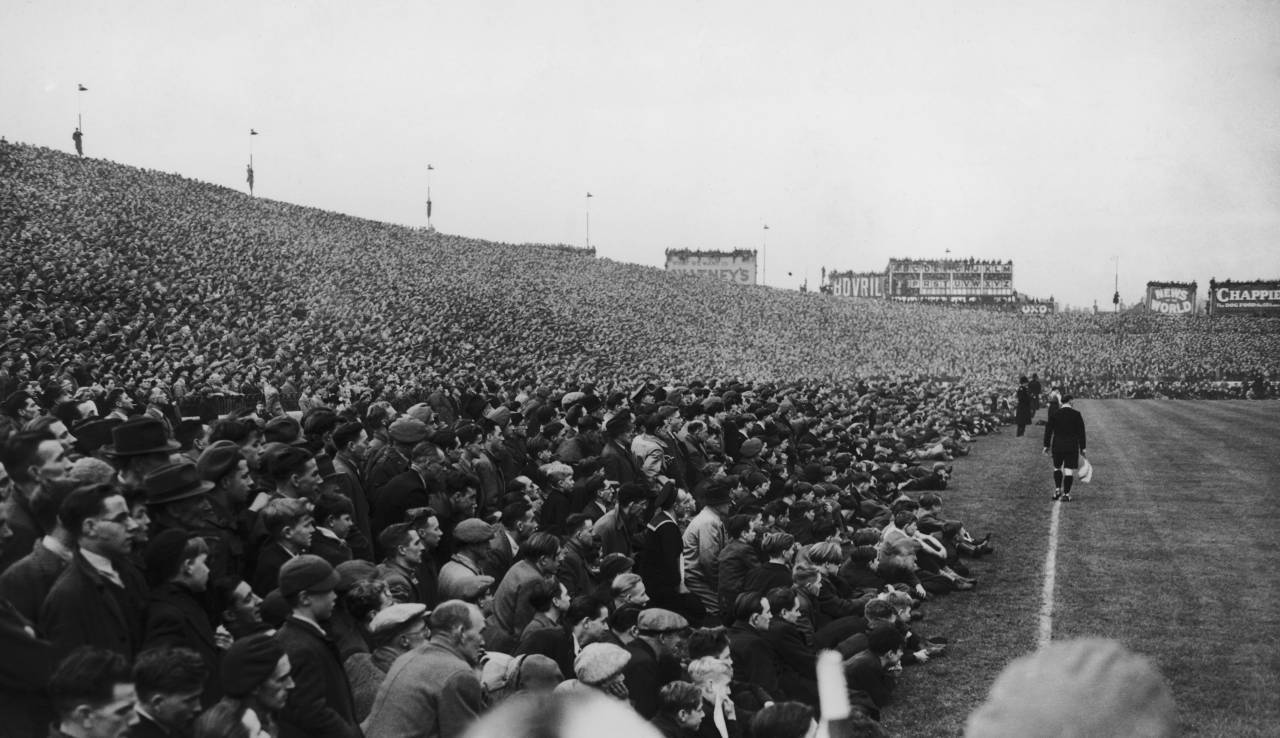 The crowd at the match between Chelsea and Moscow Spartak at Stamford Bridge, London, 13th November 1945. (Photo by Central Press/Hulton Archive/Getty Images)

Of course, the British press were sniffy. The Sunday Express reported:

“They are not nearly good enough to play our class of professional teams. Their players are simply a set of very earnest amateurs… I say this confidently. In three hours’ football….they look an ordinary lot. Now it may be argued that they are reserving their real form for the Chelsea match. I won’t have that. No set of players is clever enough to hide its form over three hours/ There must be a flash of form, but none arrived from the Russians. They have a fairly good idea of passing, but nearly all their work is done standing still. And I they are so slow that you can almost hear them think.”

A Russian radio commentator accompanying the team and lamented the austere British welcome:

“In England, the fatherland of football, we were met according to the English fashion: rather dryly without flags, music or flowers. Officials of the British federation coldly shook our hands and then threw us to the journalists to be torn to pieces. But we also have our customs. We don not like to talk in vain, so we decided to keep quiet for the time-being. The players were taken to the Guards Barracks to be housed, but we discovered mould on the walls, cobwebs and hard bolsters instead of pillows. We did not like this, and we went to the Soviet Embassy, where we stayed the night.”

But the public went crazy for the exotic visitors. 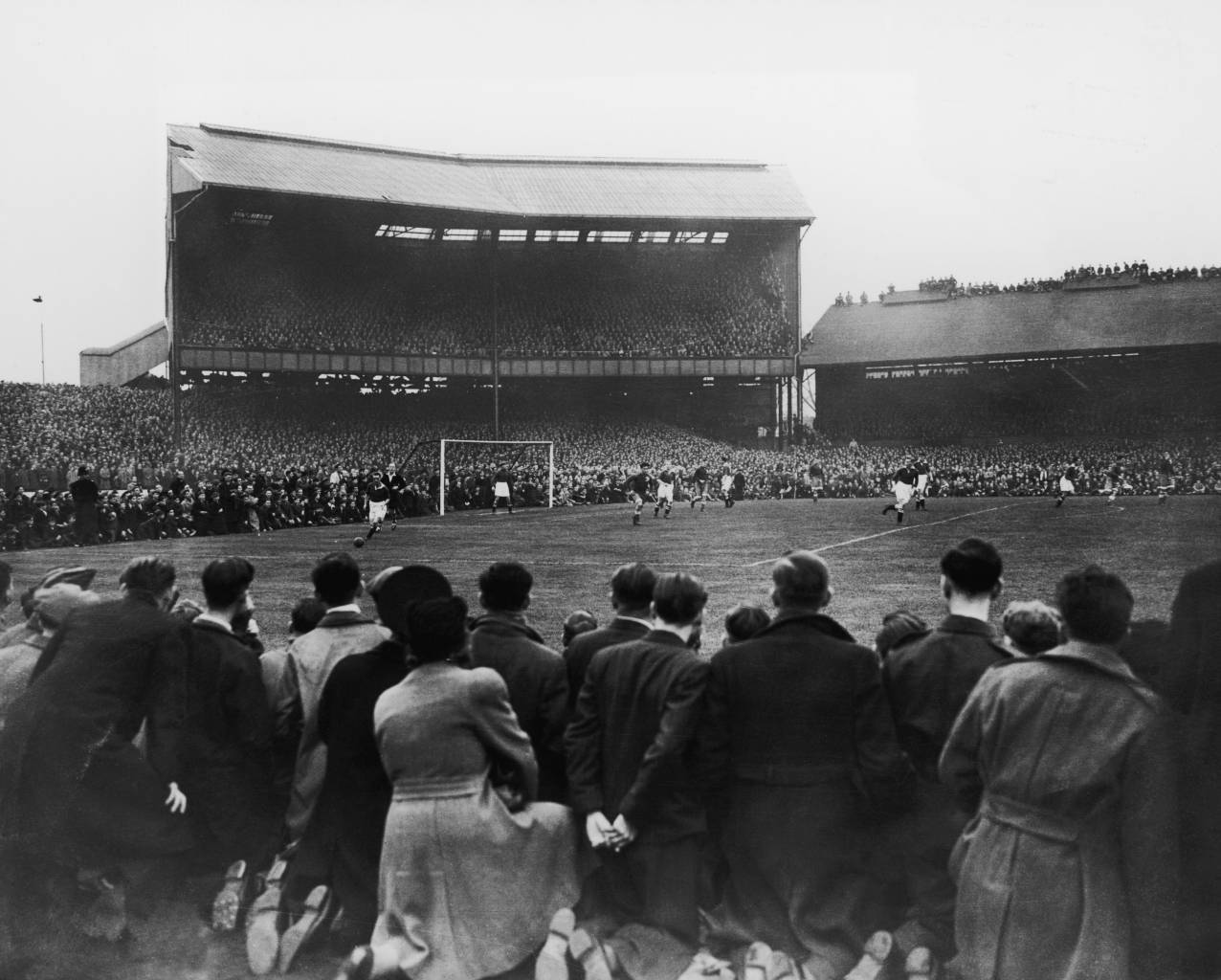 A crowd of around 100,000 watching Chelsea play Moscow Dynamo at Stamford Bridge in the first game of the Russians’ tour of Britain. (Photo by Central Press/Getty Images)

Before the first game of the tour, fans started queuing at Stamford Bridge at 8am for a 2.30pm kick-off.

The trickle soon turned to a flood. Local residents hired out their gardens for bicycle storage at thruppence a bike, and charged two shillings and sixpence to help drivers find a parking space.

The District Line and local bus services were overwhelmed. The gates opened at 1pm but still the crowds came. At 2.10pm the gates were closed, leaving some 20,000 fans – many with tickets – outside. So they sought other means of entry.

Some fans scaled buildings on the Fulham Road that had windows and roofs high enough to offer a view of the ground. Residents answering a knock on their front door were pushed aside by fans who took to the upper floors or stormed through gardens to get a view of the pitch. 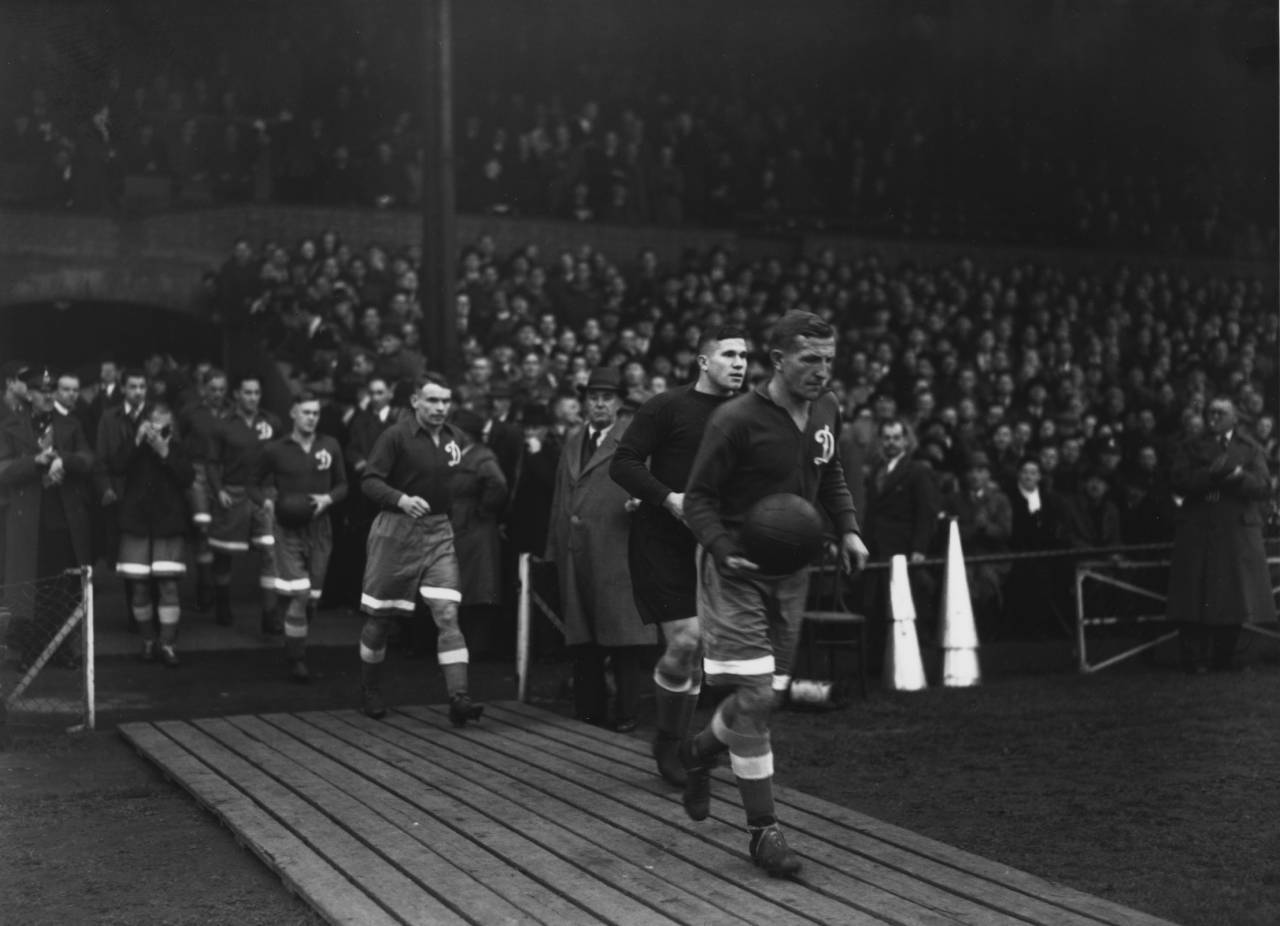 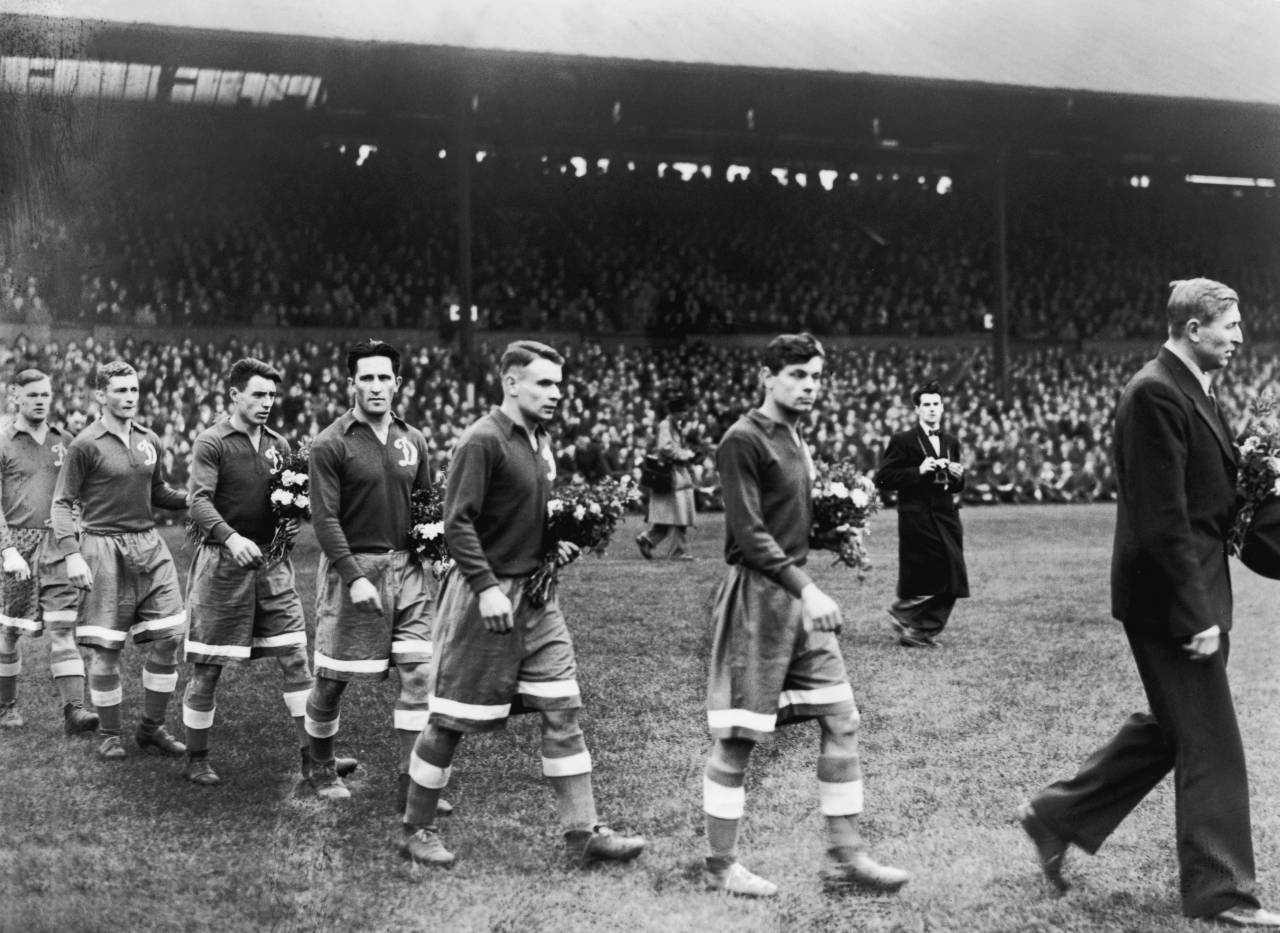 The Moscow Dynamo team walk on to the pitch at Stamford Bridge with bouquets of flowers to present to the Chelsea team before the match. The game ended in a 3-3 draw. (Photo by J A Hampton/Getty Images)

Fences were torn down to be used as battering rams against locked gates. Fans scaled walls and fences, crossed electric rail tracks, scrambled up embankments and took to underground tunnels. 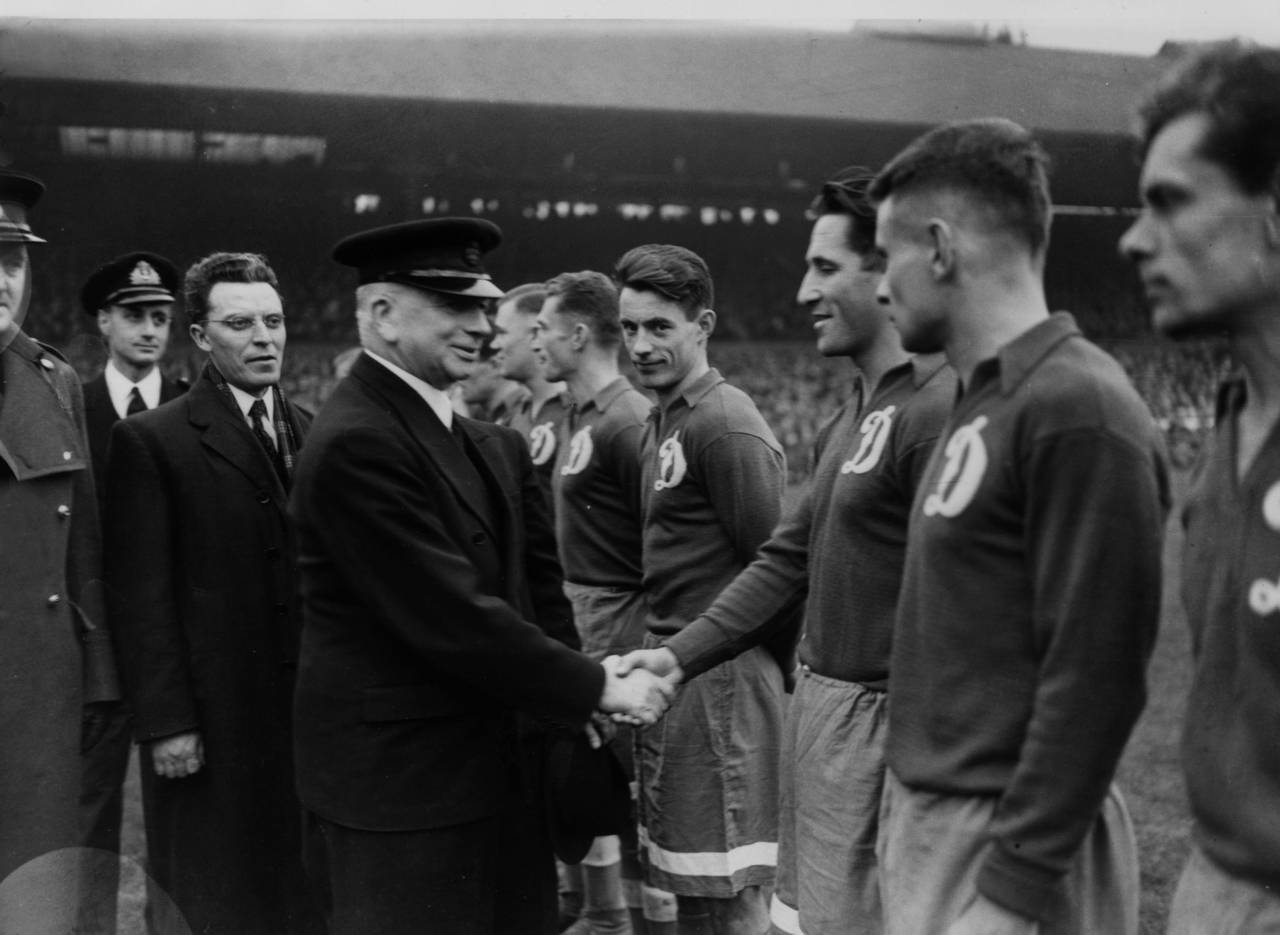 There were 75,000 inside the ground when the gates were closed, and it’s estimated that another 15,000 forced their way in.

Some fans fell through the glass roof of the main stand. The crush pushed the crowd over the perimeter of the greyhound track and up to the very edge of the pitch. The press described the scenes as “The Battle of Fulham Road”. 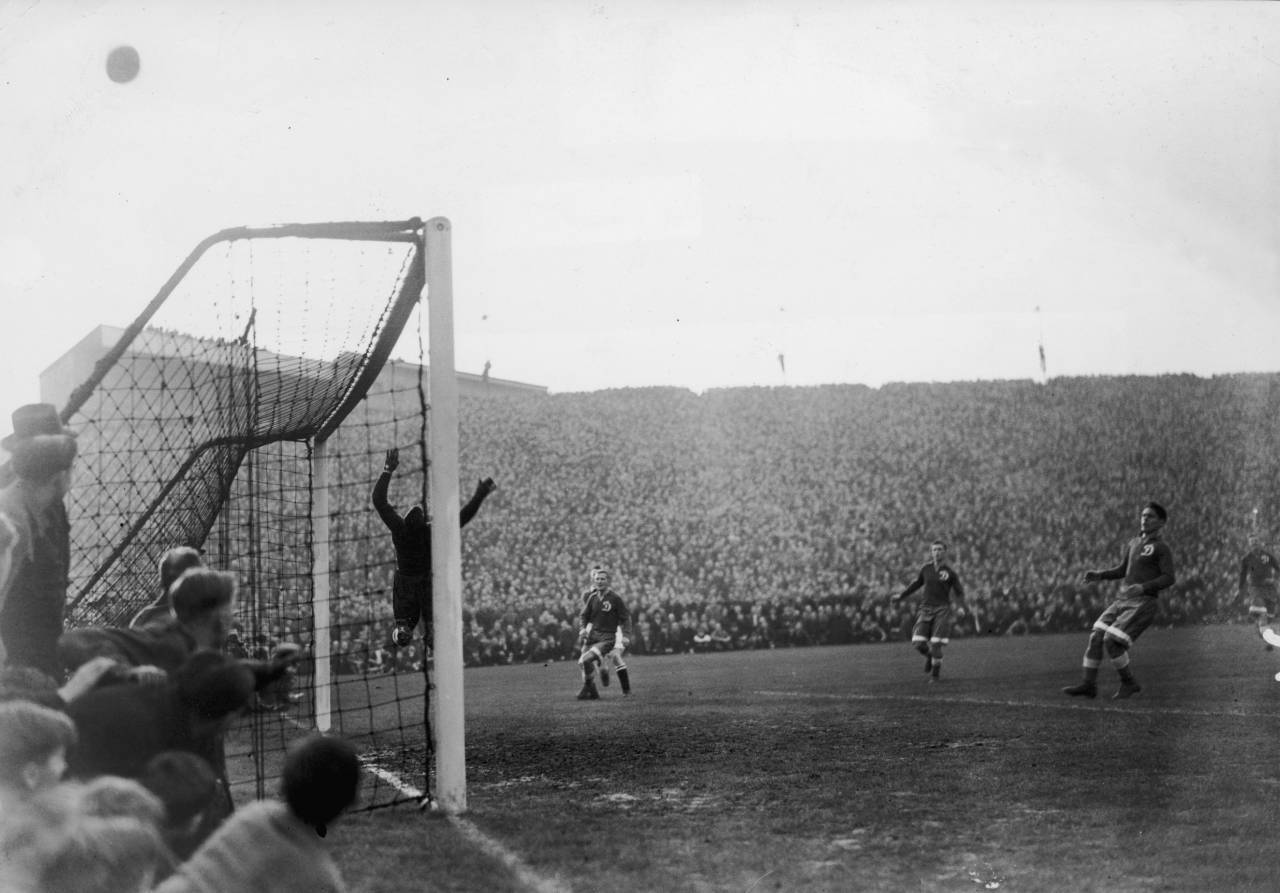 The game turned out to be a belter, finishing in a 3-3 draw. At the whistle, the crowd poured onto the pitch and carried the Soviet players aloft.

Russian commentator Vadim Sinyavsky shouted down his microphone: “Listen comrades in Moscow, Leningrad, Tbilisi, Berlin, we have passed our first exam with honour.”

Dynamo went on to play Cardiff City (winning 10-1) and Arsenal, the dominant England side between the wars. Dynamo coach Mikhail Yakushin opined: “To come to London and not play Arsenal would be like visiting Cairo without seeing the pyramids.” 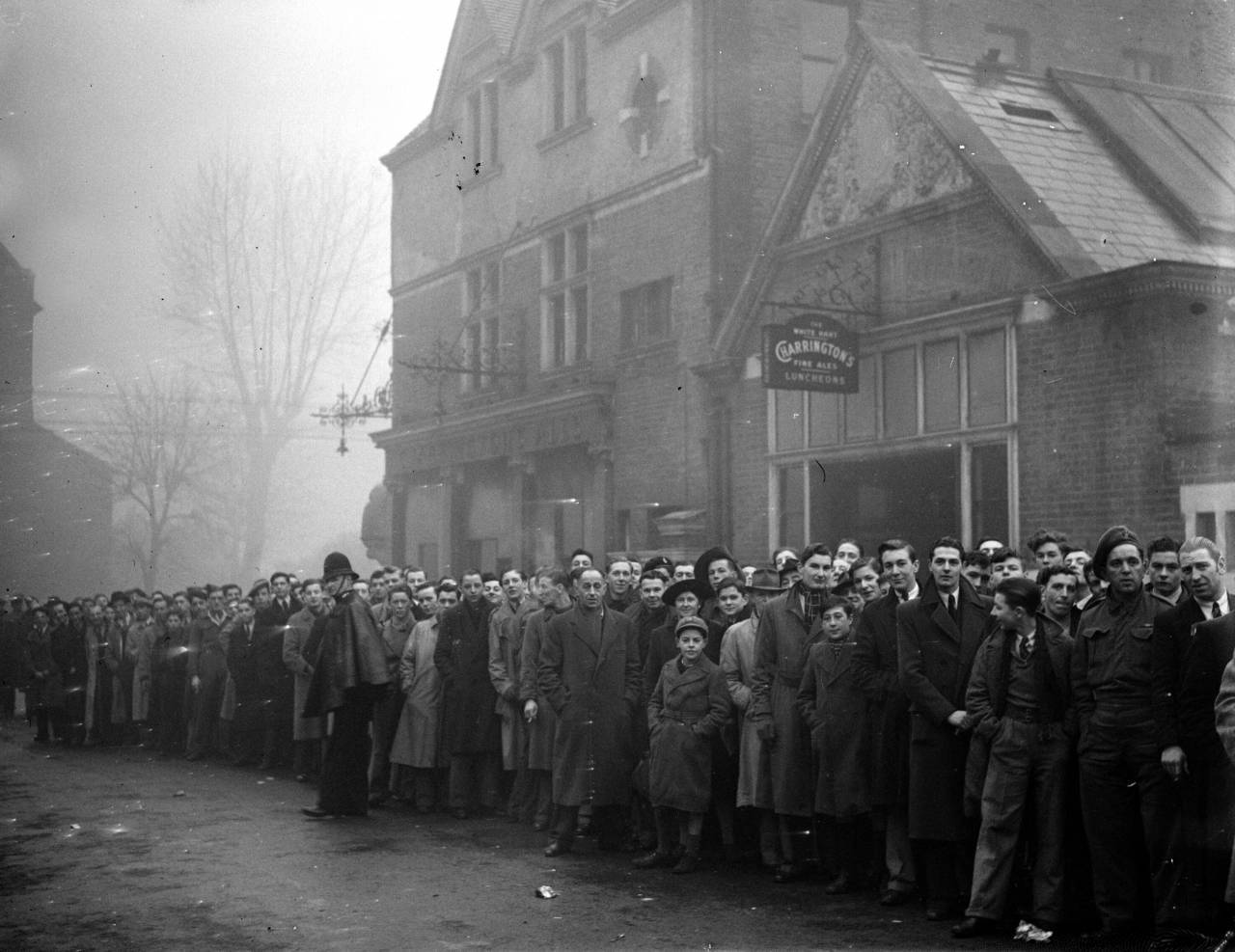 21st November 1945: Part of the queue outside Tottenham’s ground for the football match between Arsenal and Dynamo Moscow. (Photo by William Vanderson/Fox Photos/Getty Images)

…a pea-souper fog descended upon north London and seemed certain to end the tie. But incredibly, the Russian referee, M. Nikolay Latyshev, ushered the players out to play. More than 54,000 spectators had filled the ground, but catching any of the action at the opposite end of the field was impossible. The game was only 30 seconds old when Dynamo managed to poke an early lead. Like many, LV Manning , in the press box, missed the goal. He could only describe the crowd: “A thousand men lighted a thousand cigarettes and it looked like a thousand bonfires.” Arsenal’s own fire was soon stirred and Mortensen and Matthews quickly helped the Gunners establish a 3-1 lead, but a goal by Beskov made it 3-2 at half-time. To those in the crowd and on the pitch it seemed inevitable that the game would be abandoned. But it wasn’t, and vague shadows appeared to contest a farcical second half. Serge Soloviev restored parity early on despite being blatantly offside, even in the fog. Somewhat bizarrely, the Russian official had placed both of his English linesman on one side of the pitch and himself on the other. His decisions were perplexing the hosts and it wasn’t long before Dynamo scored a winning goal through an again-offside Bobrov. Having had what appeared to be a perfectly valid goal ruled out, Allison suggested to the Soviet Embassy’s First Secretary that they concede the game to stop the nonsense. His offer was politely declined. The final straw came when several Arsenal players noticed that the Russians seemed to have an extra player on the field and it was established that due to a mix-up in the fog during a substitution. Dynamo had been playing with 12 men for a good 20 minutes. With the numbers evened up, the visitors held on their lead to record a 4-3 victory.

Post match, Arsenal captain Cliff Bastin claimed that, “so long as the Dynamos got the ball in the net, even if they carried it there, the referee was going to award them a goal.”

The final match saw Moscow take on Glasgow Rangers before a huge 92,000 crowd. The game ended in a 2-2 draw.