Illustrations from Nearly Three Hundred Ways To Dress Shop Windows by James Marriot, published in Baltimore, 1889, caught our eye.  The Preface extols the worth of a modern window display: ‘The old style of window dressing no longer attracts, but it is the novel  and striking ideas that take the public eye, and never fail in their effect.’ The book was intended as a guide for small store owners unable or unwilling to afford professional window dressers. ‘A careful investigation of the subject reveals the fact that there is no work of a similar character in existence,’ writes Mariot, ‘and it is therefore confidently believed that this publication will, to use an old and somewhat time-worn  expression, “fill a long felt want.”‘

Mariot also know how to sell his book. ‘The price of the book has been placed at such a low figure that no merchant can possibly object to its purchase on the score of excessive cost,’ he advises. ‘The same matter, if obtainable at all in any other way, would entail an expense at least twenty times as great.’ It’s a bargain!

We’ll being with the store front that caught our furtive eye. This is “A CURIOUS WINDOW‘: 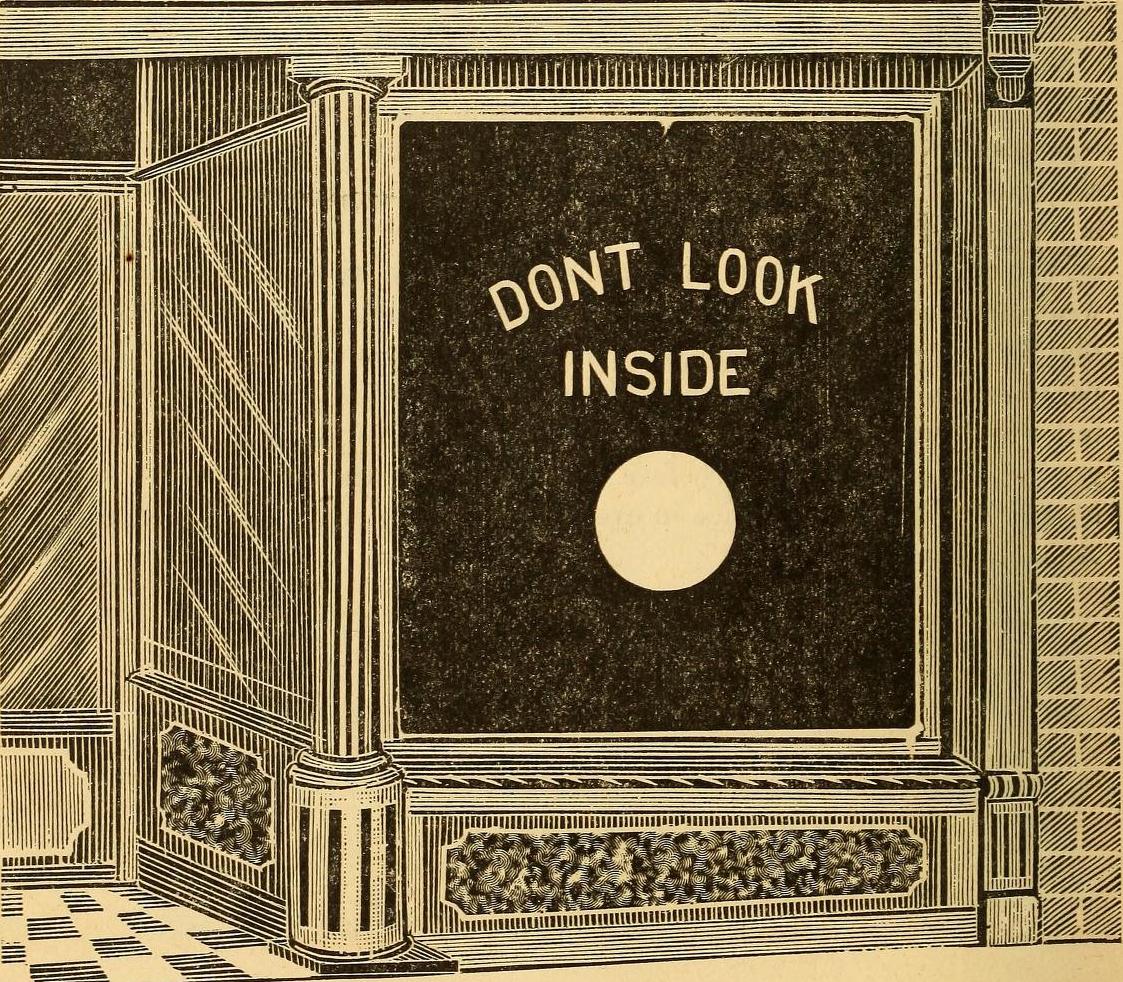 Mariot explains how to get the look:

In order to perfectly explain the following suggestion two illustrations are necessary, the first being an EXTERIOR VIEW of the window. This arrangement is very simple indeed, and consists in  obscuring the view of the show window by means of some black material, such as black calico stretched across the window, leaving a hole in the center not more than twelve inches in diameter, and over it place the words “Do Not Look Inside.” This wording can be made best and cheapest by using Willson’s white gummed letters. This being done the view for outside effect is complete. Then place something over the hole so that passers by cannot  see inside during the operation, and proceed to perfect the scene as shown  in sketch for the interior view. 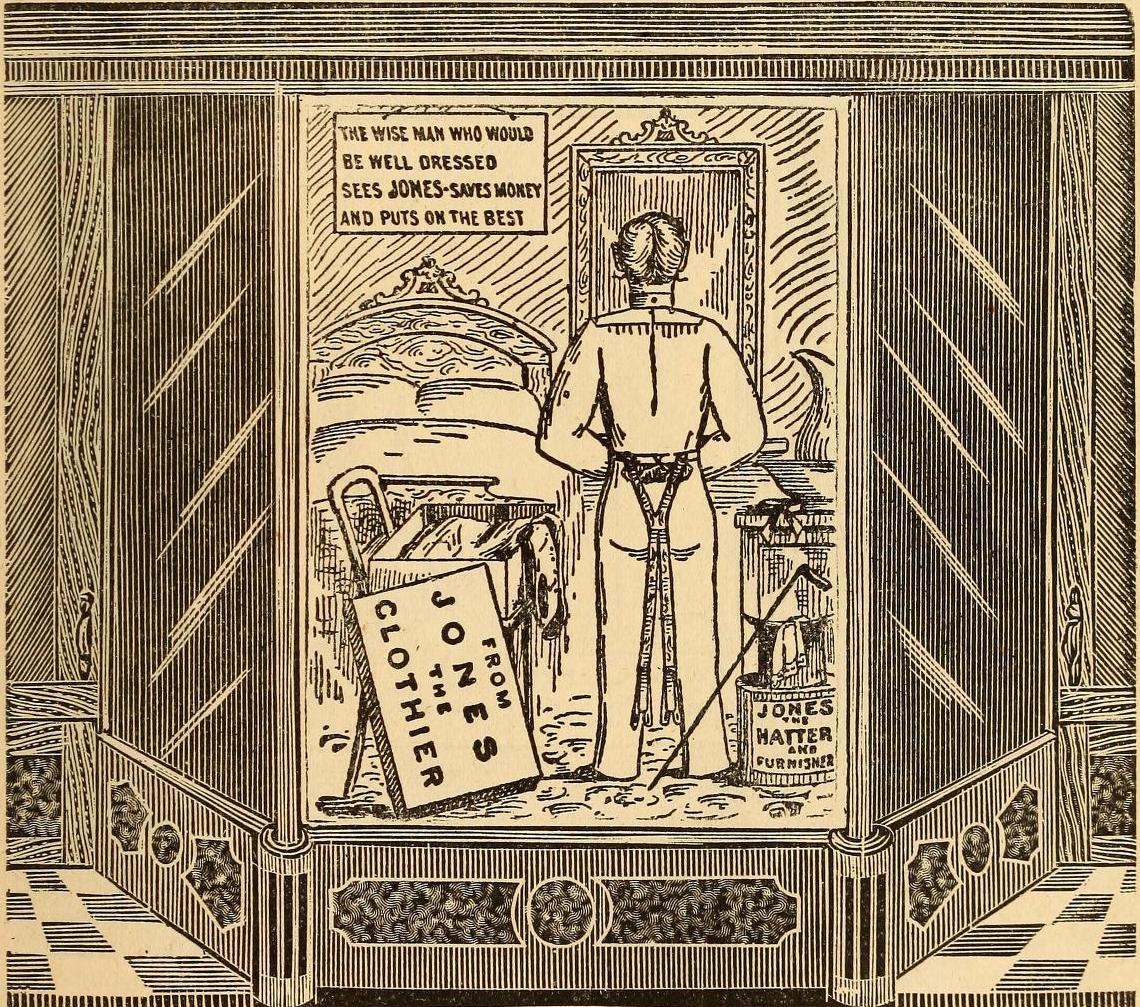 People are sure to crowd at the window to get a peep, so take time and make a good show. On the bottom of the window lay a piece of nice carpet. Then borrow from the furniture man nearby the necessary articles of furniture, placing them in the position shown in sketch. The intention is to represent a bedroom scene, in which a man is putting on a suit of clothes purchased from your store. On the chair place a strawboard box, such as a suit of clothes is usually packed in, and place the lid in such a position as to show up your name distinctly on the top of it. Near the washstand put a hat placed on the top of a box, also bearing your name. Make the name  in large, black gummed letters. The dummy should be placed in the center, facing the mirror, in the act of adjusting his clothing. After placing a show-card on the wall, many little things will doubtless suggest themselves to the window dresser which will heighten the effect. This will make a  great attraction during the evening when the gas is lighted.

A few others that stand out: 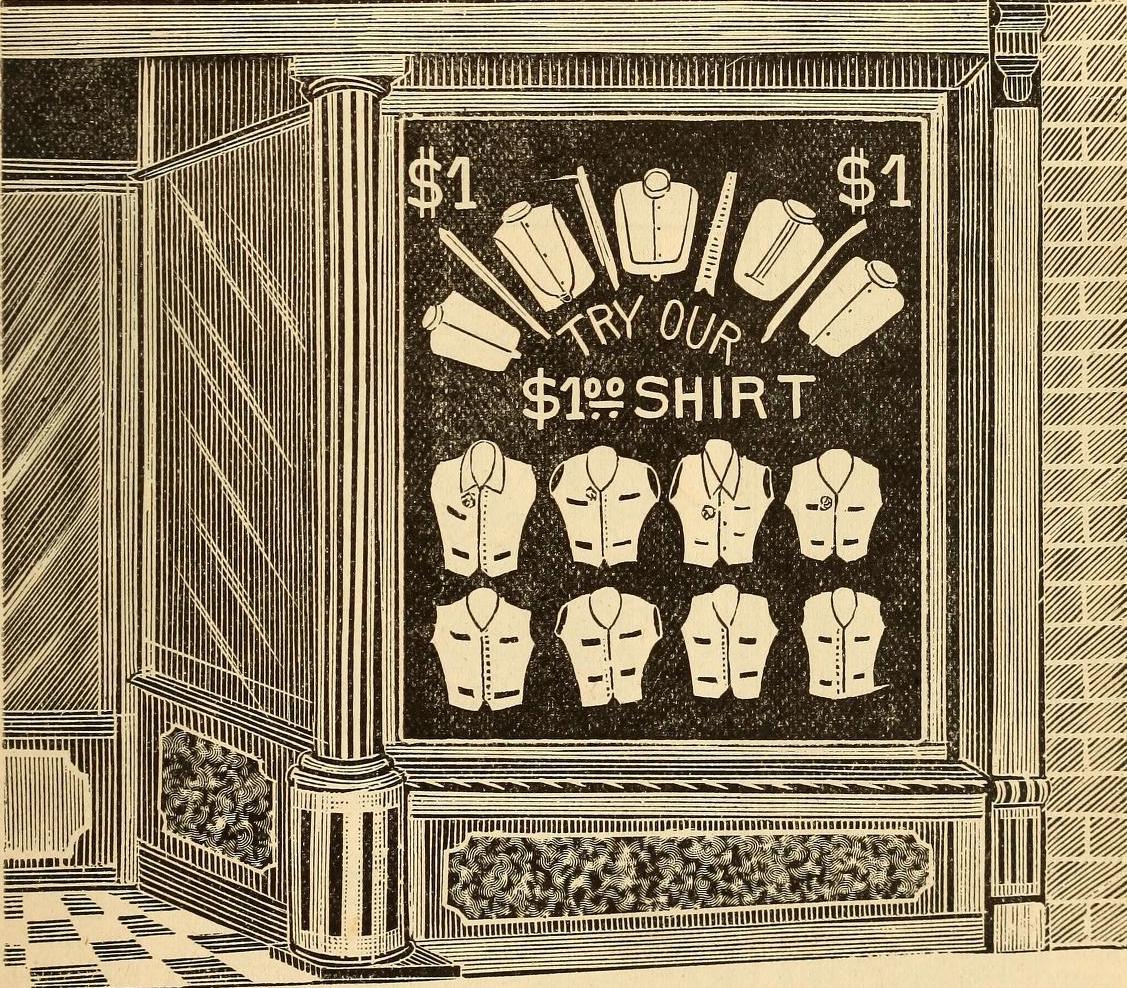 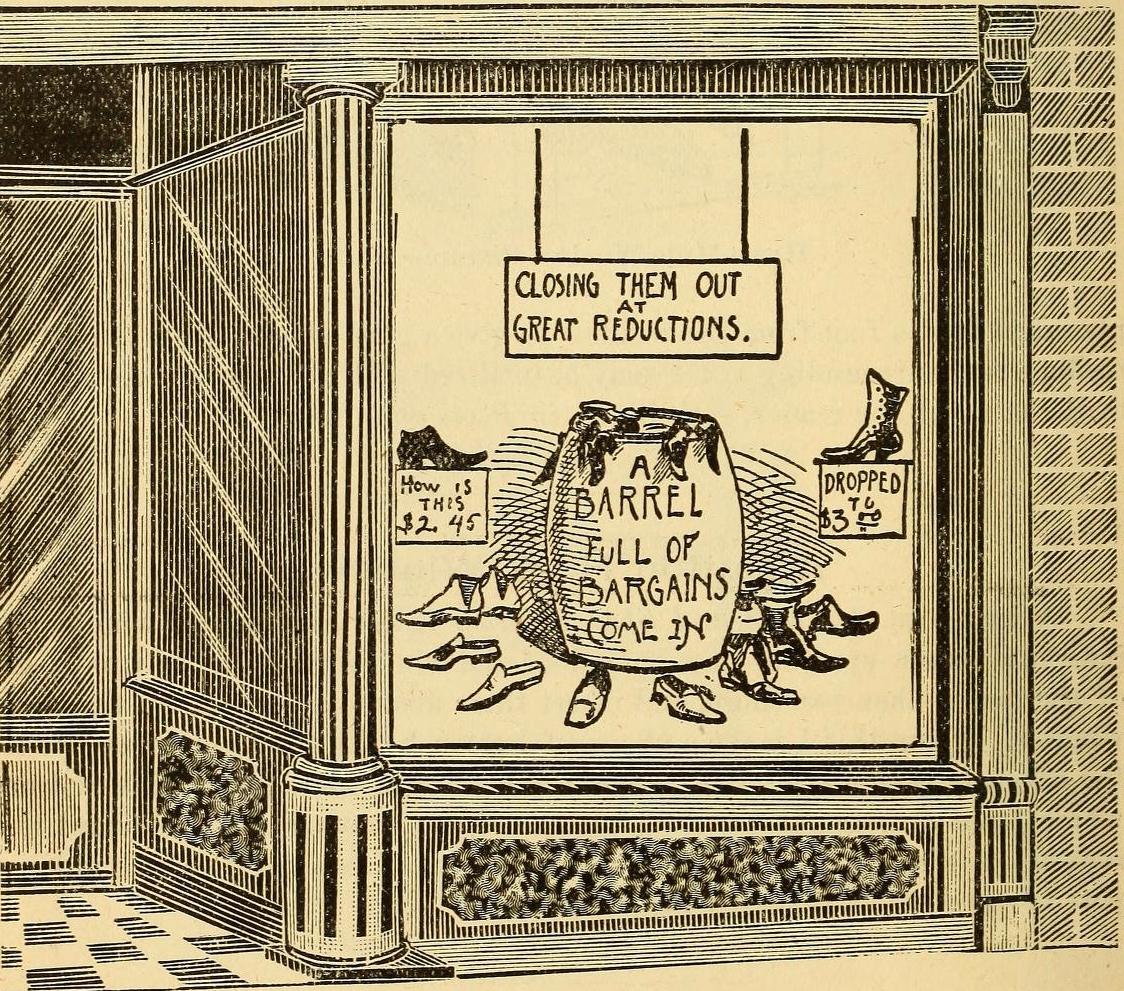 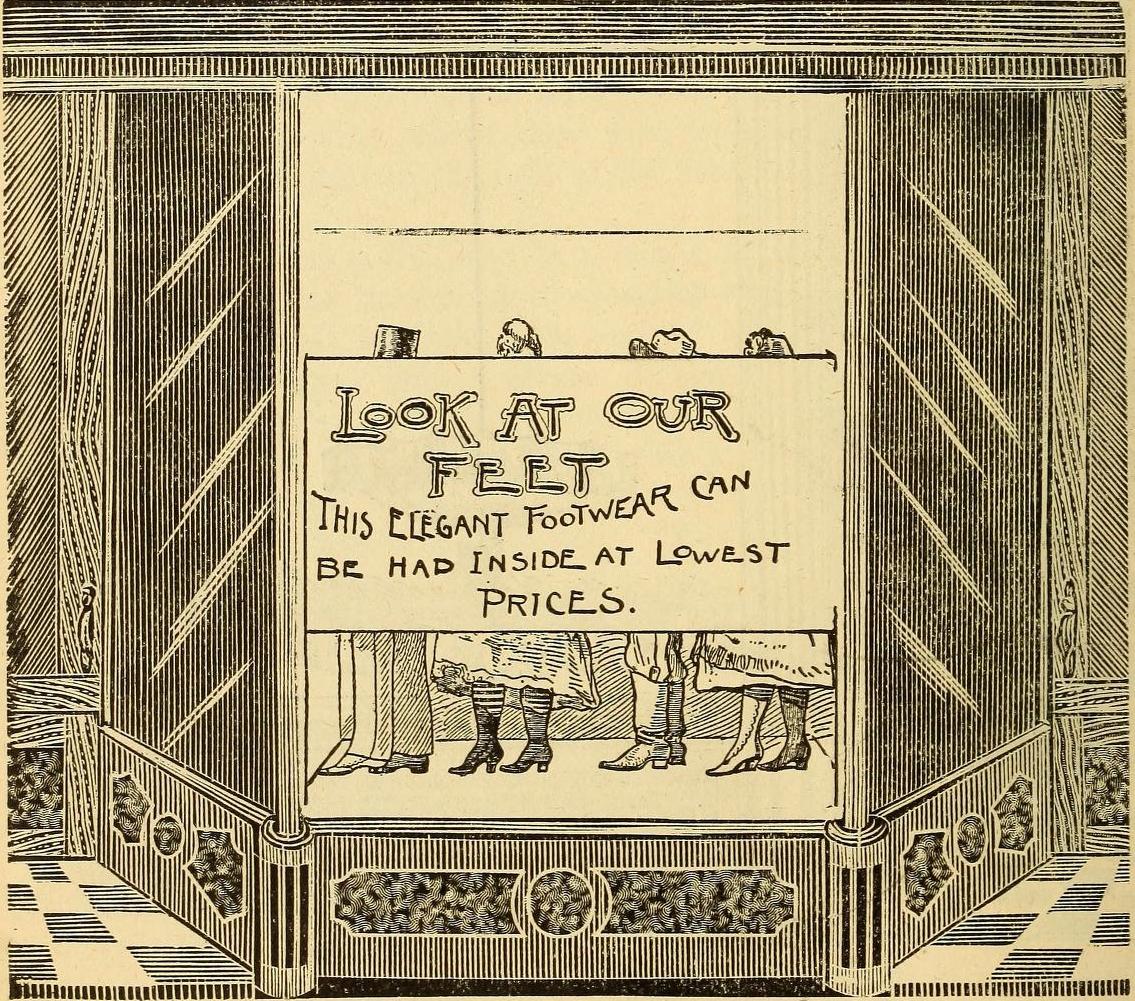 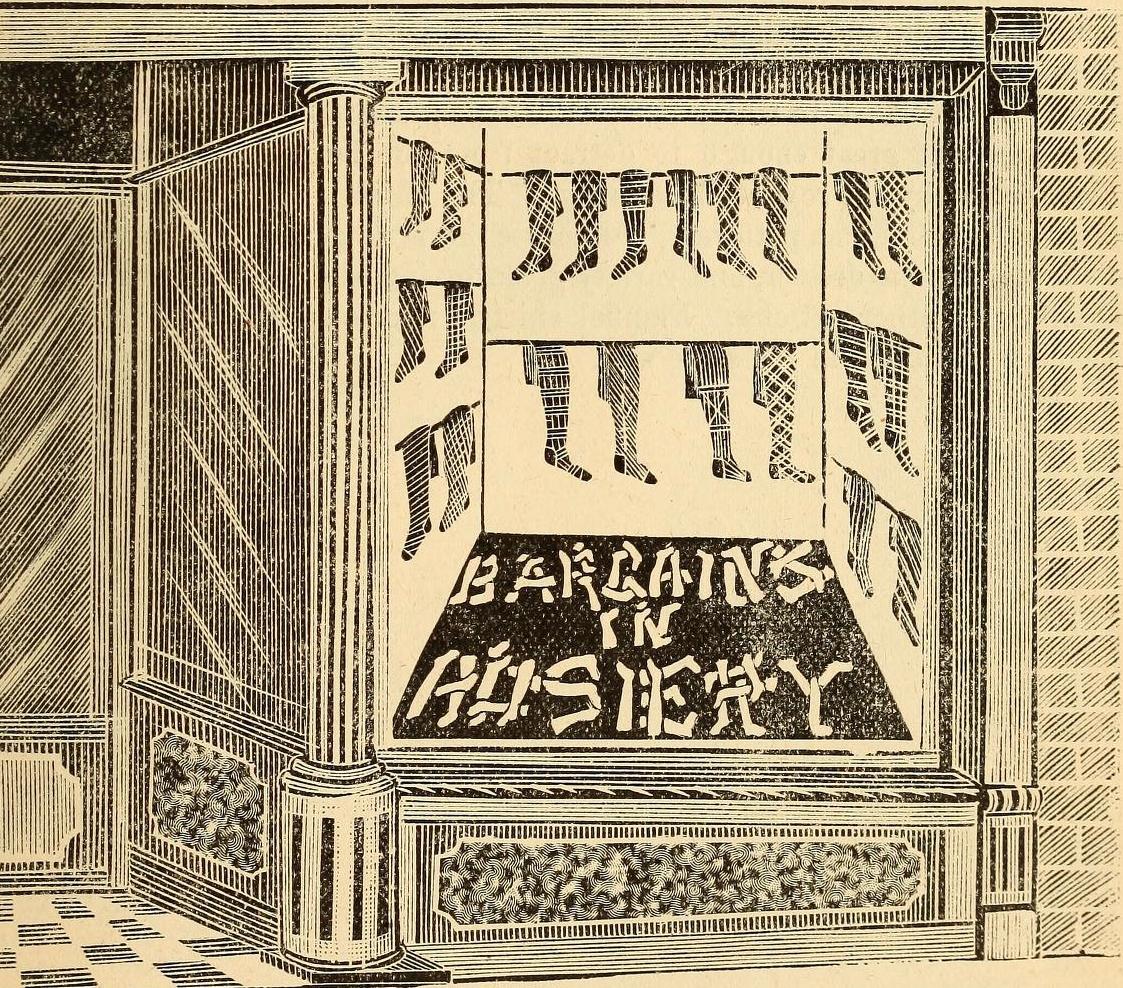 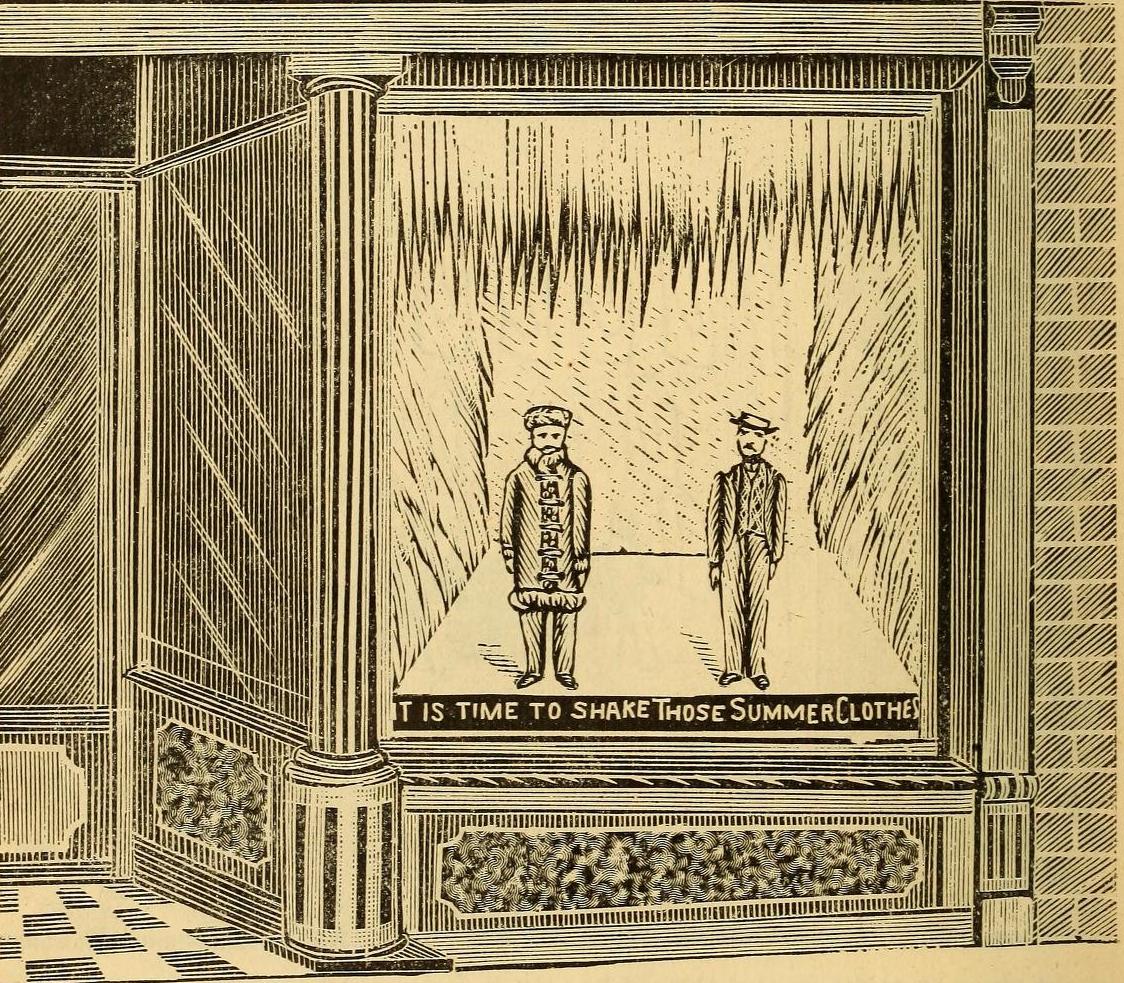 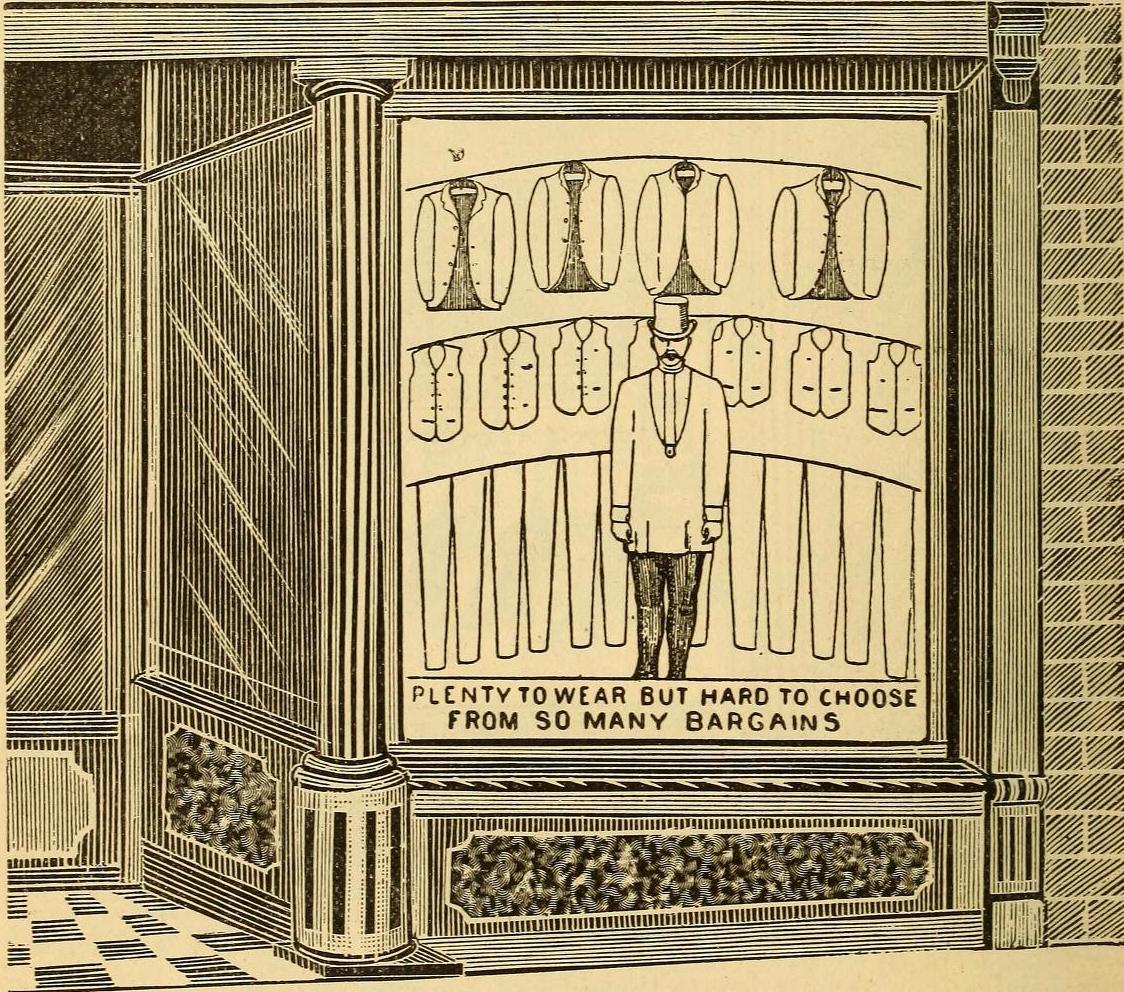 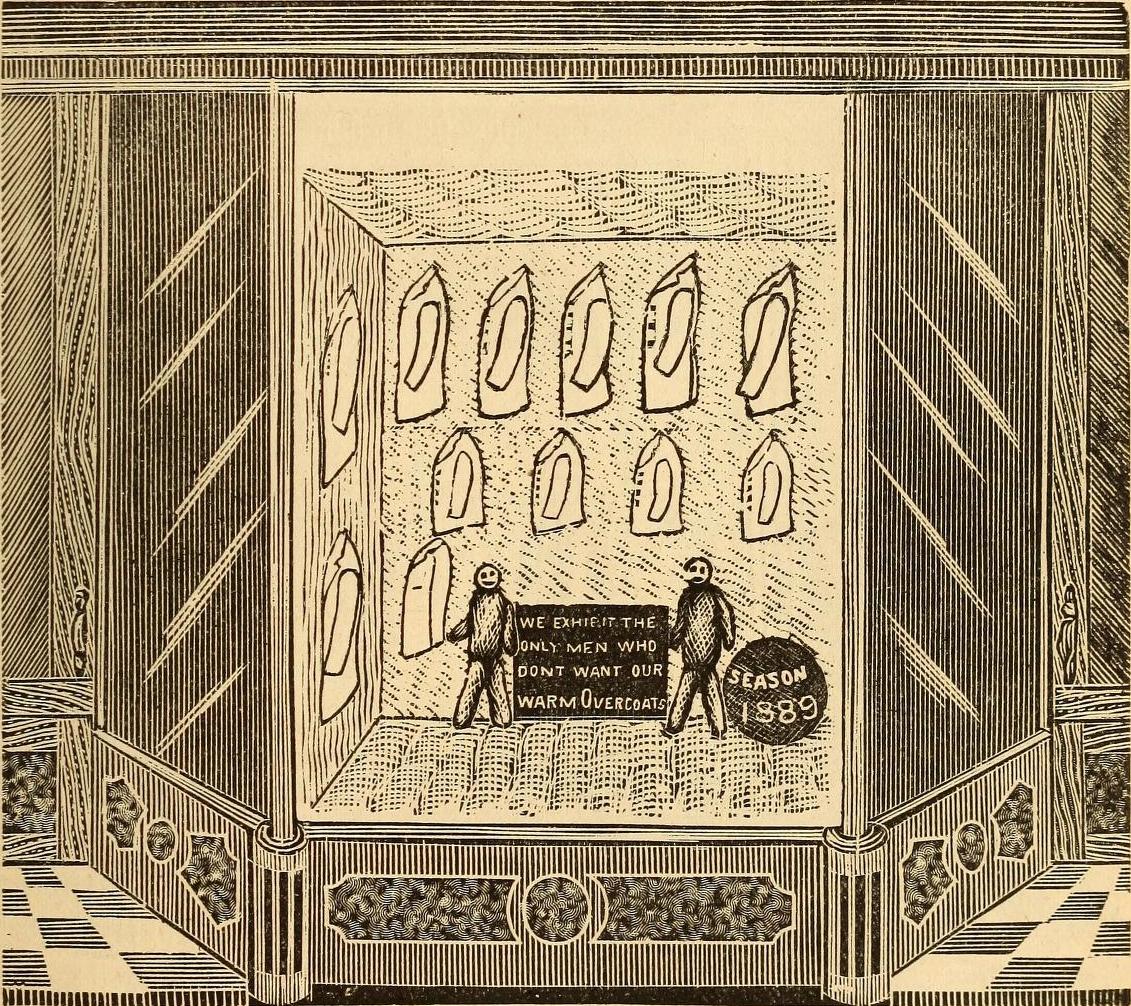 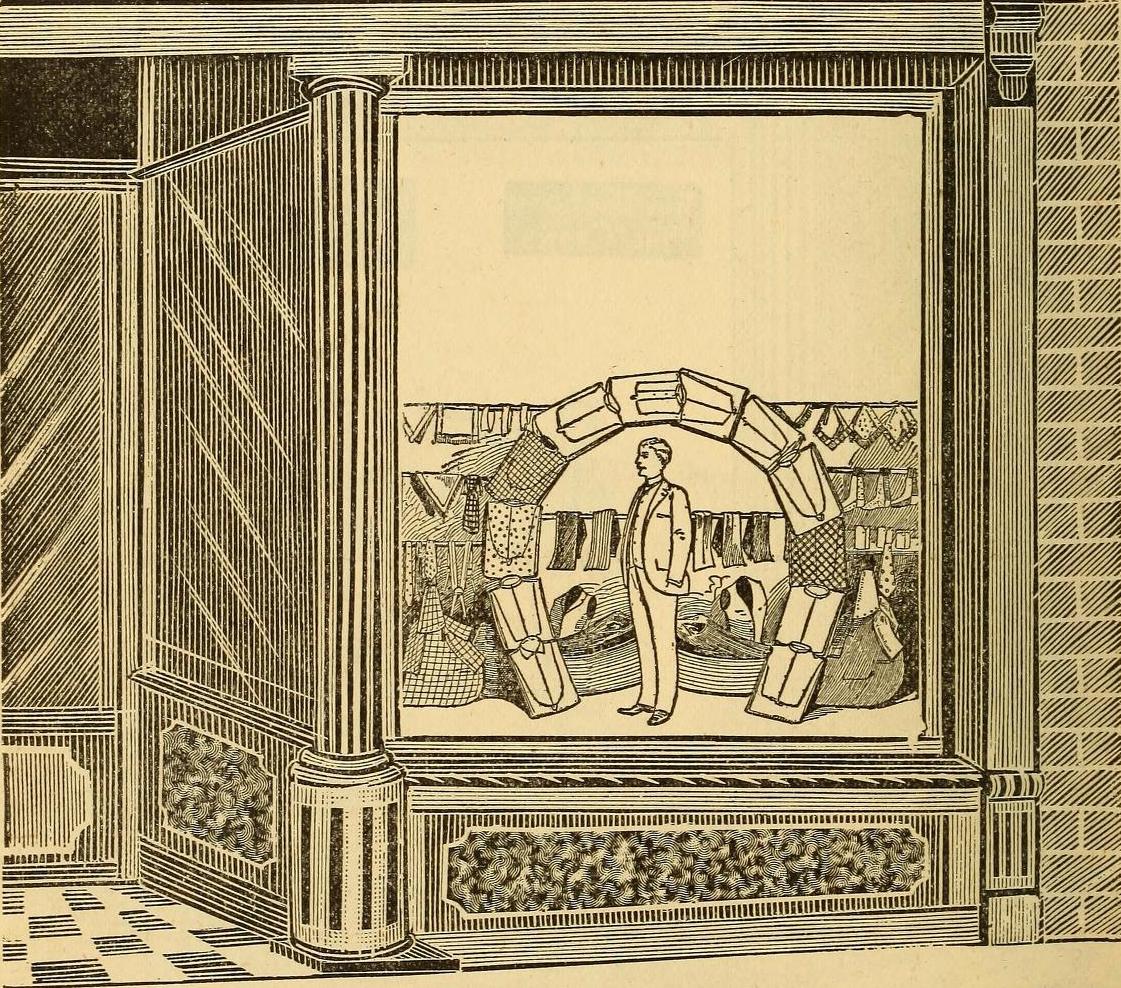 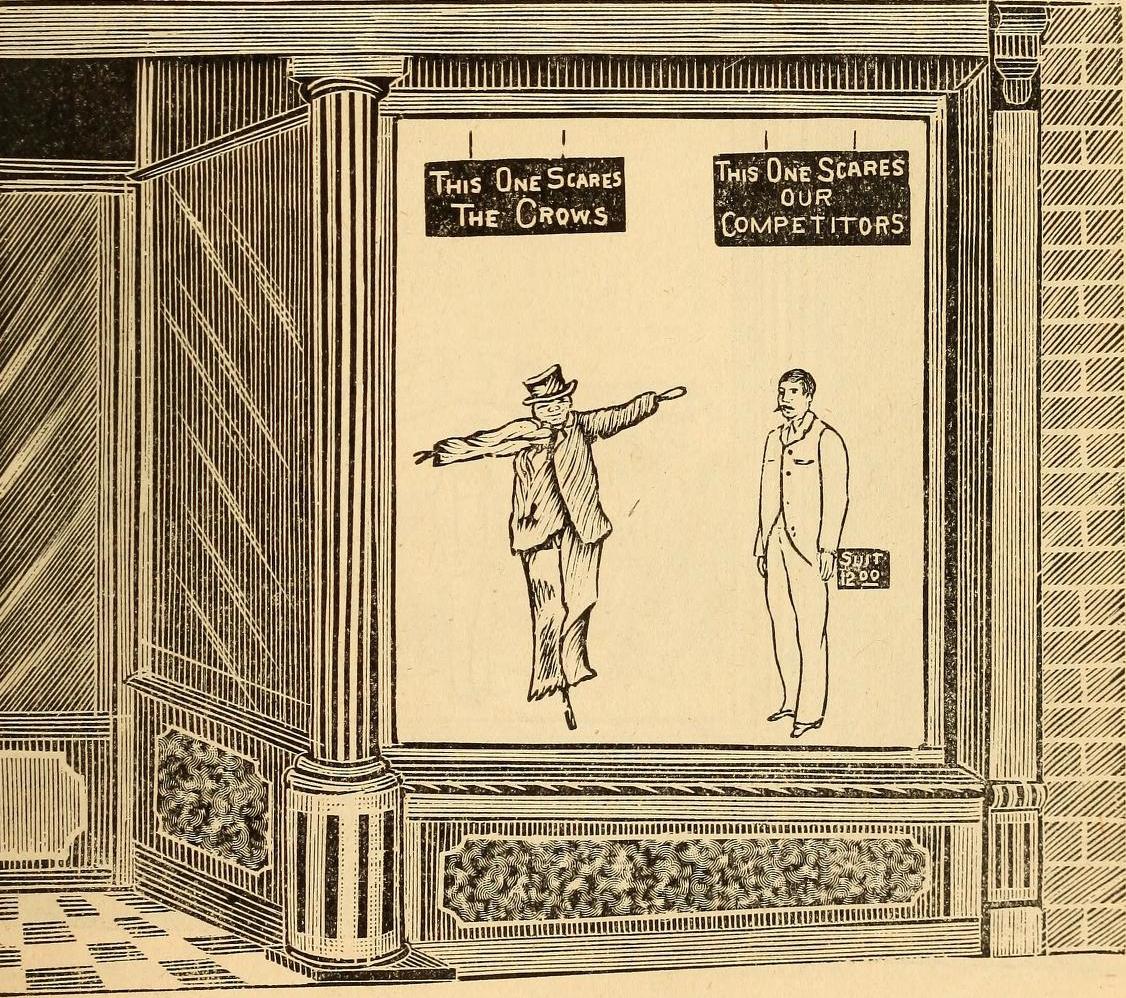 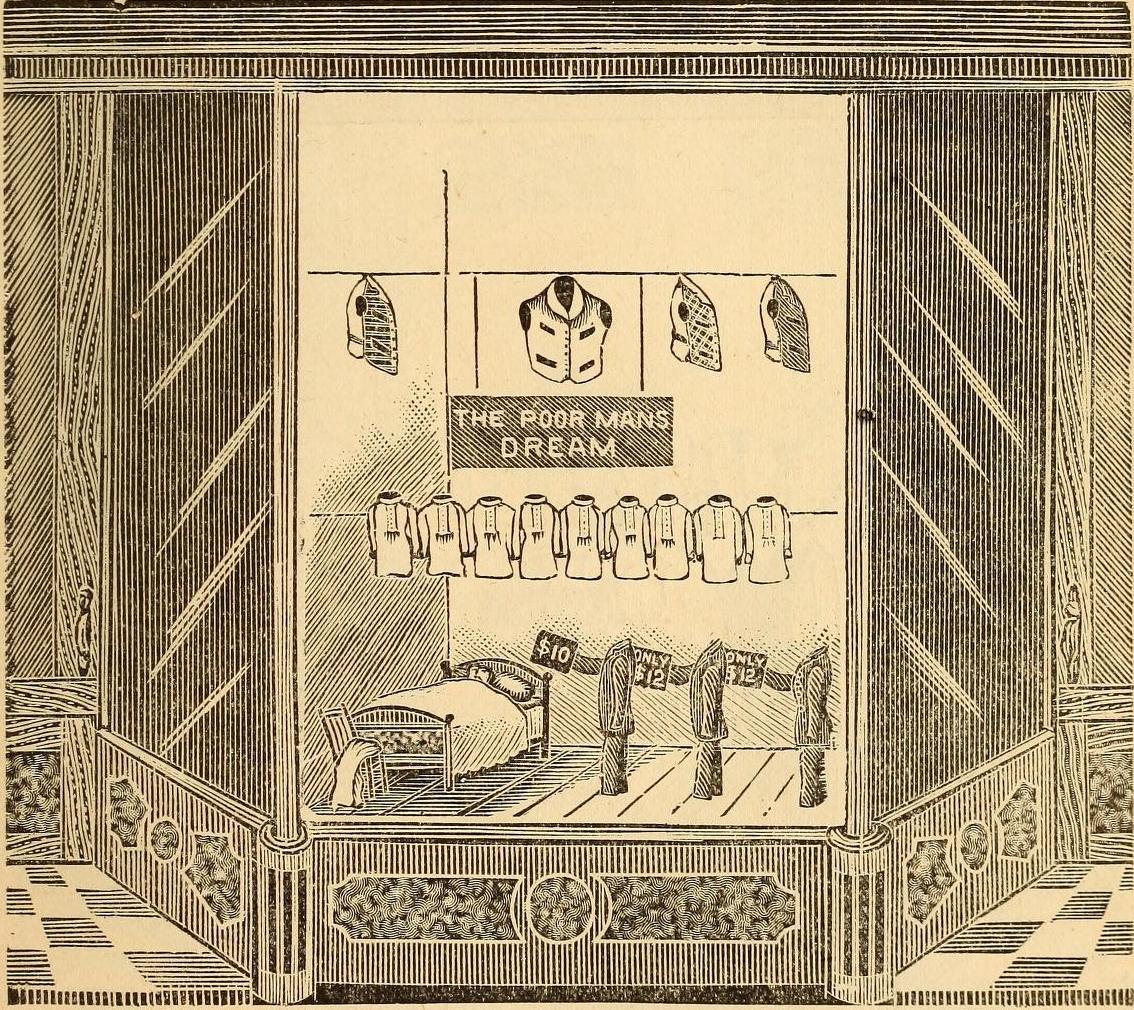 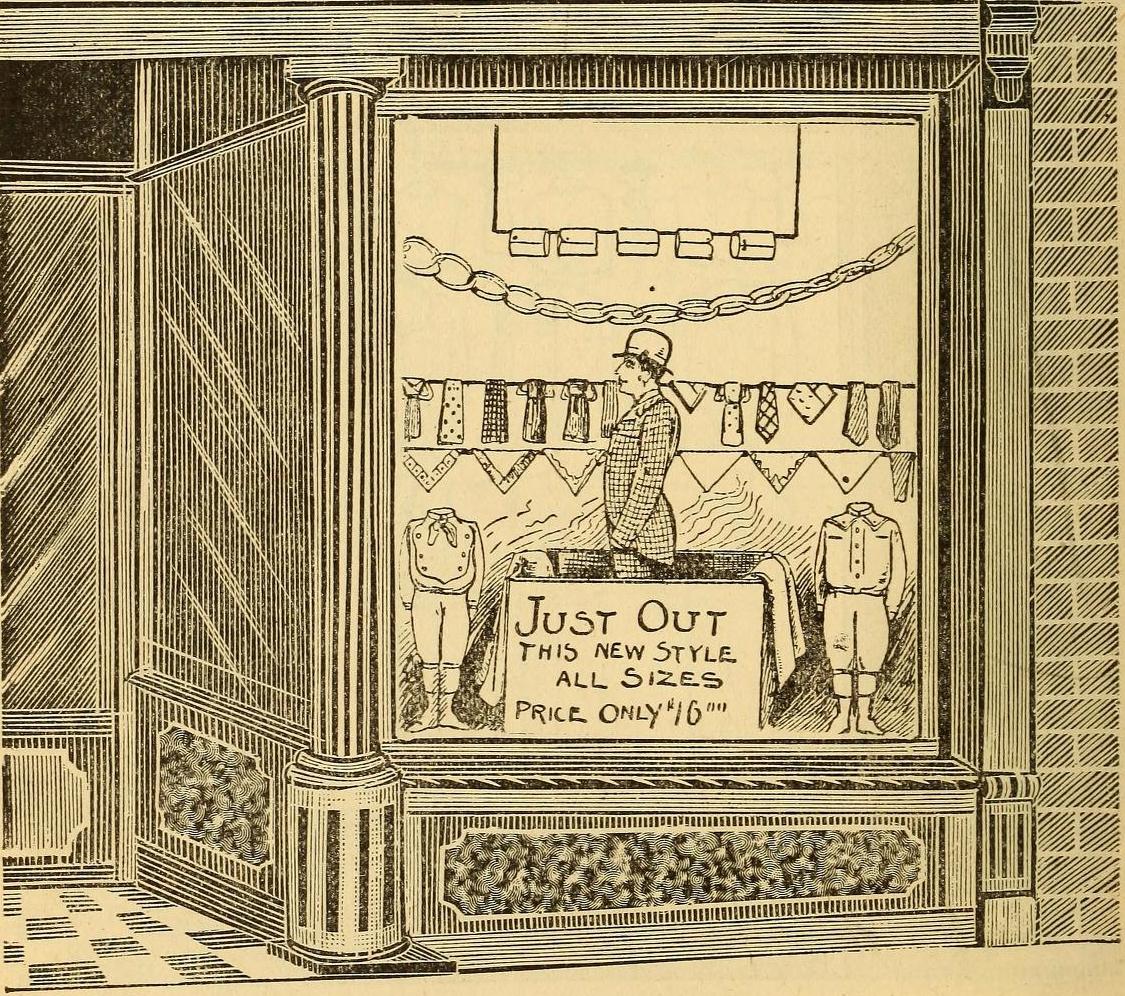 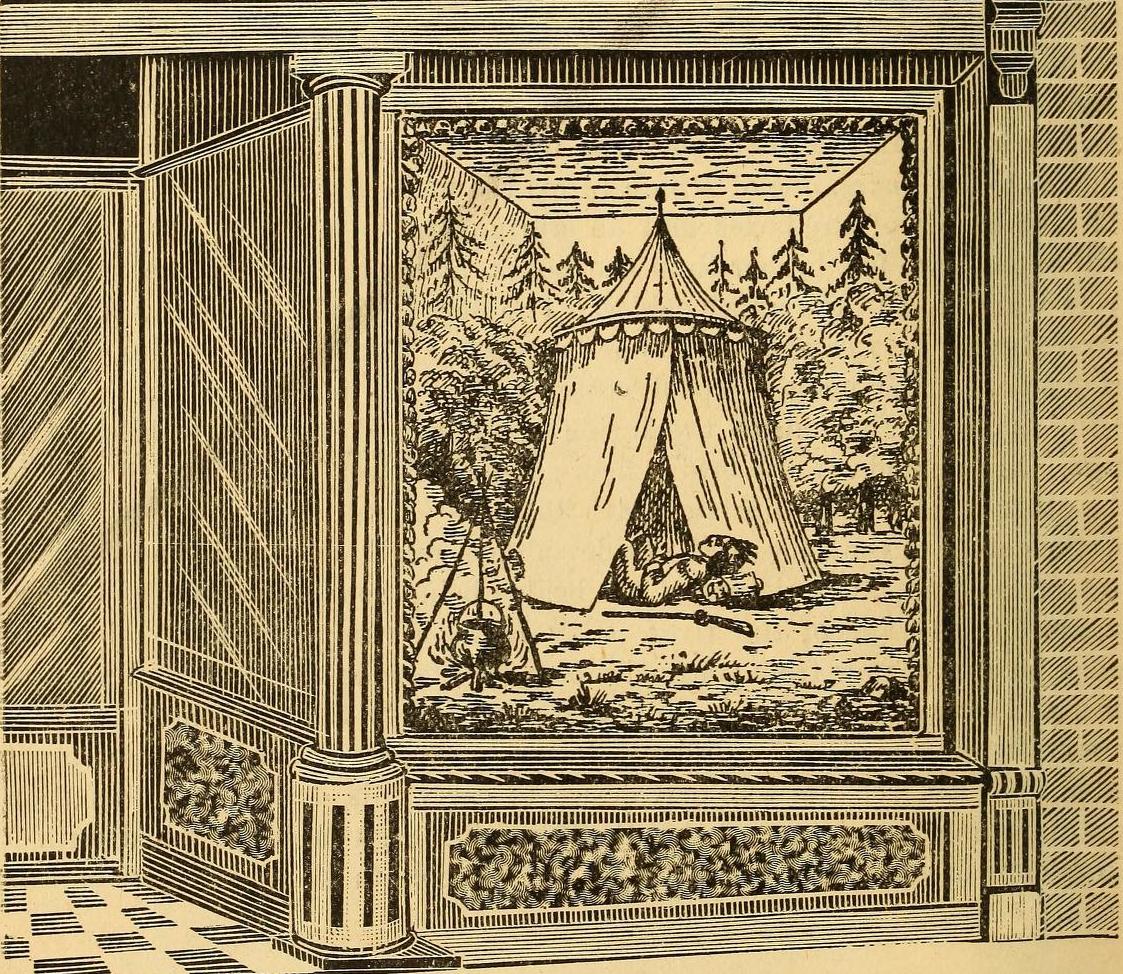 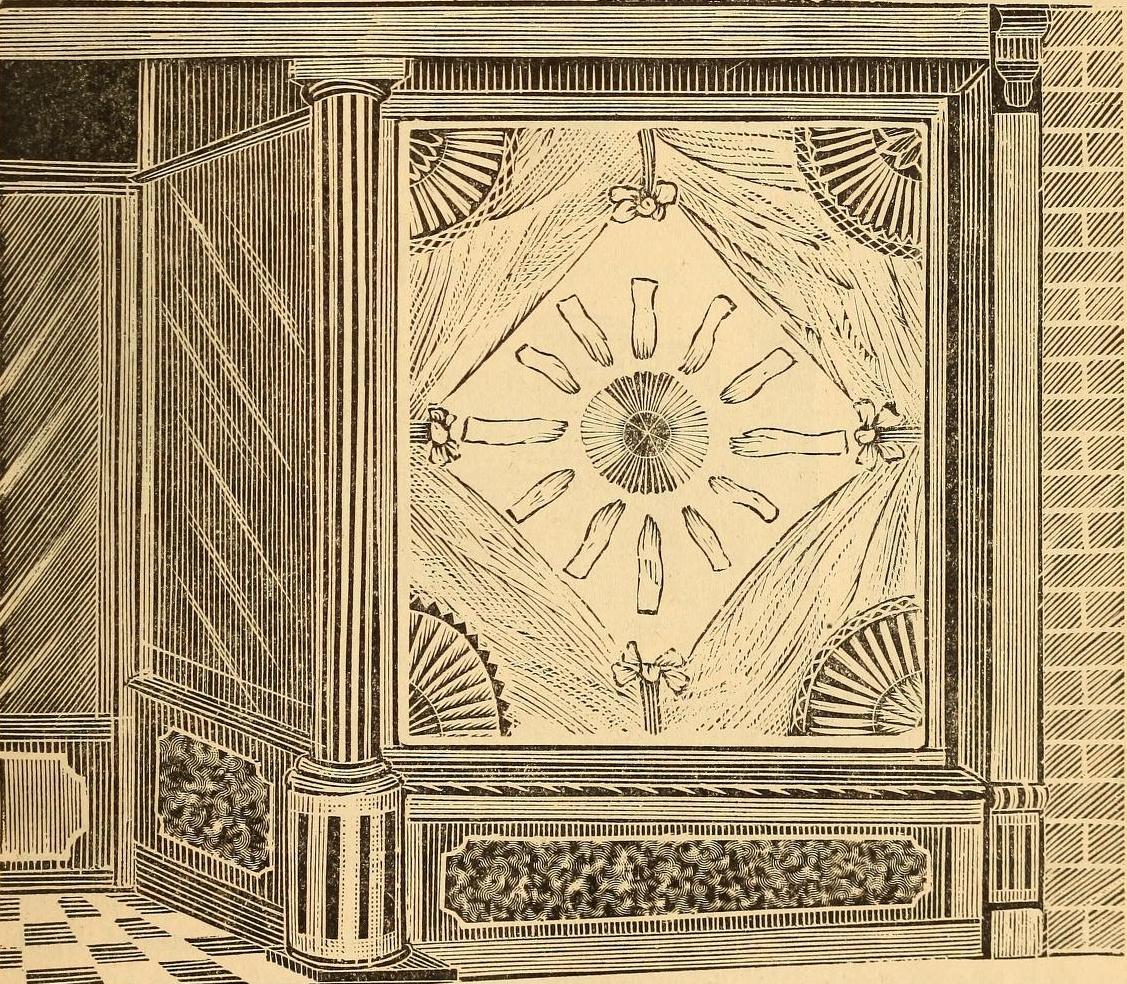 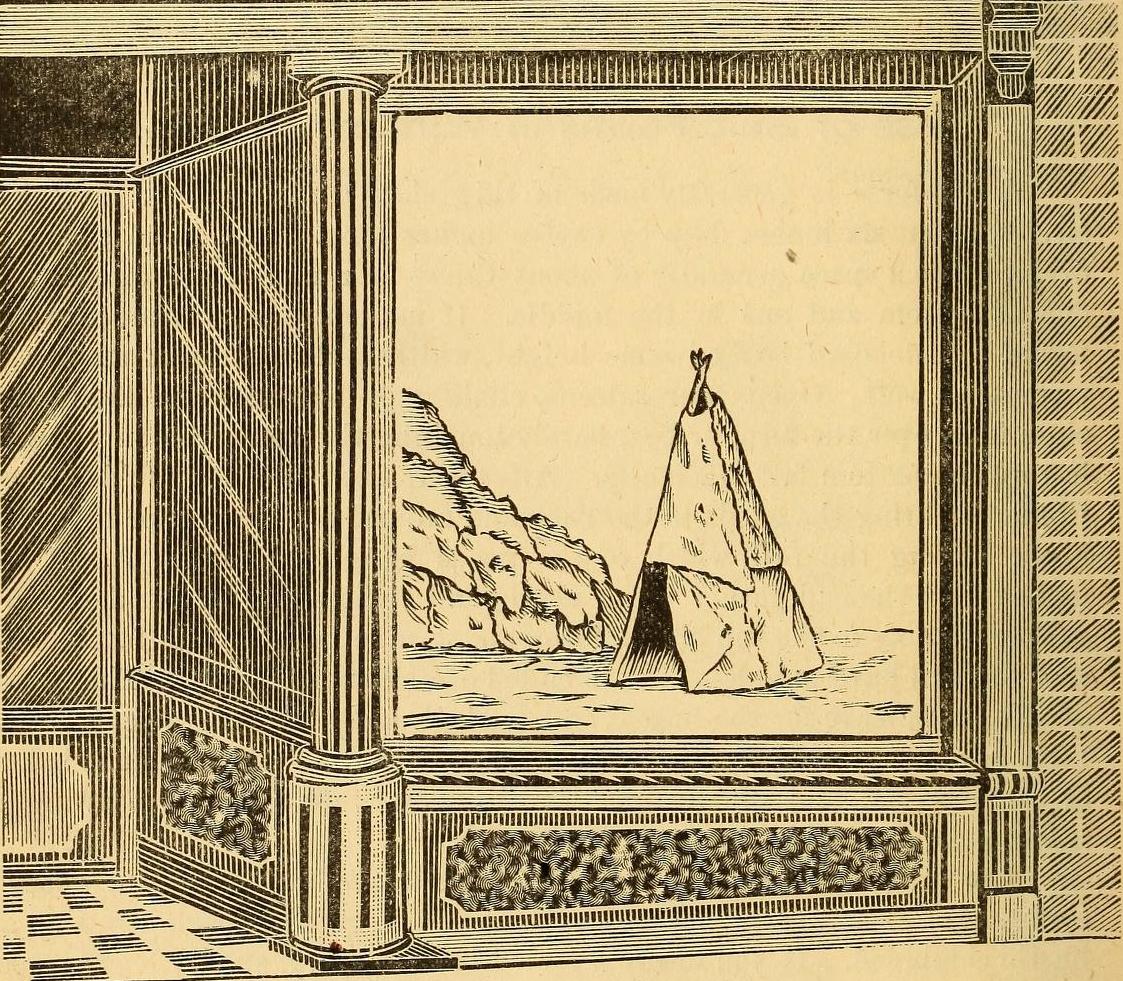 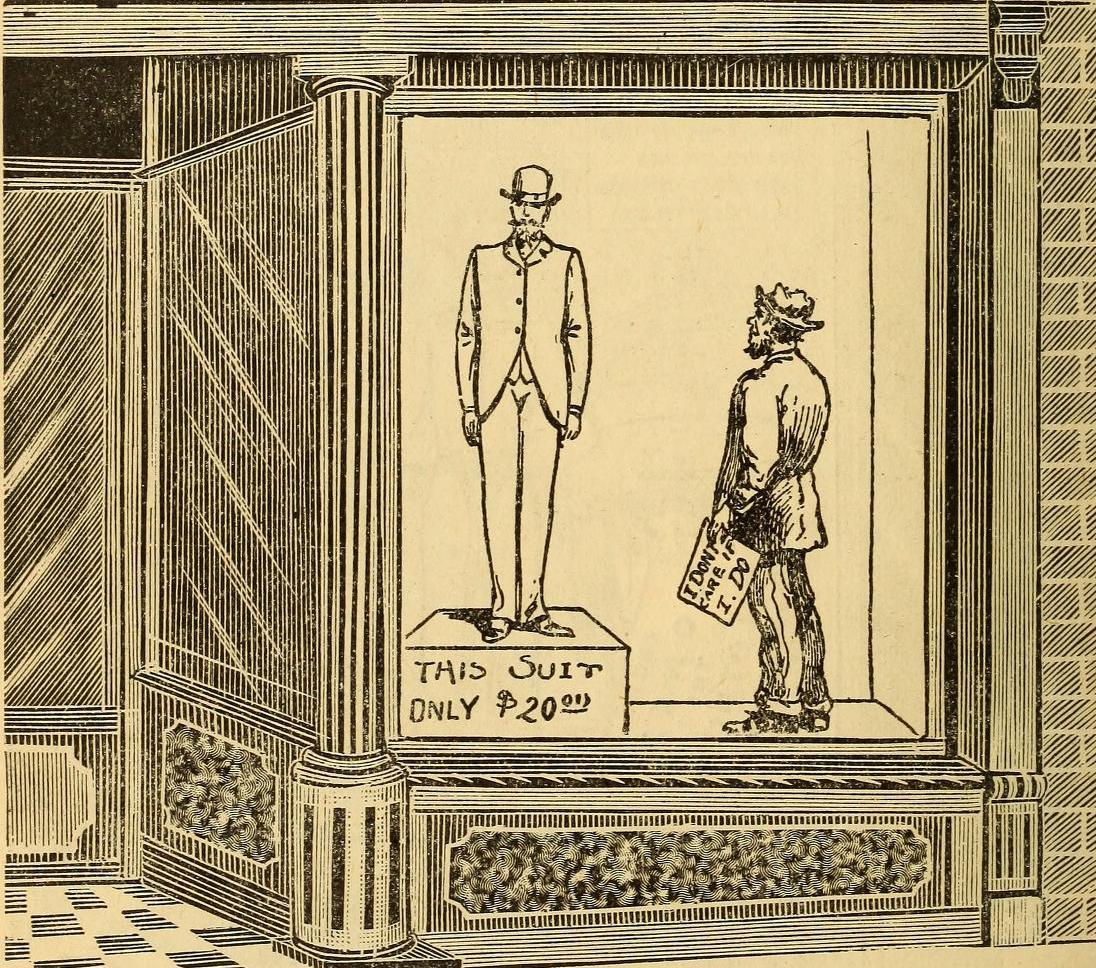 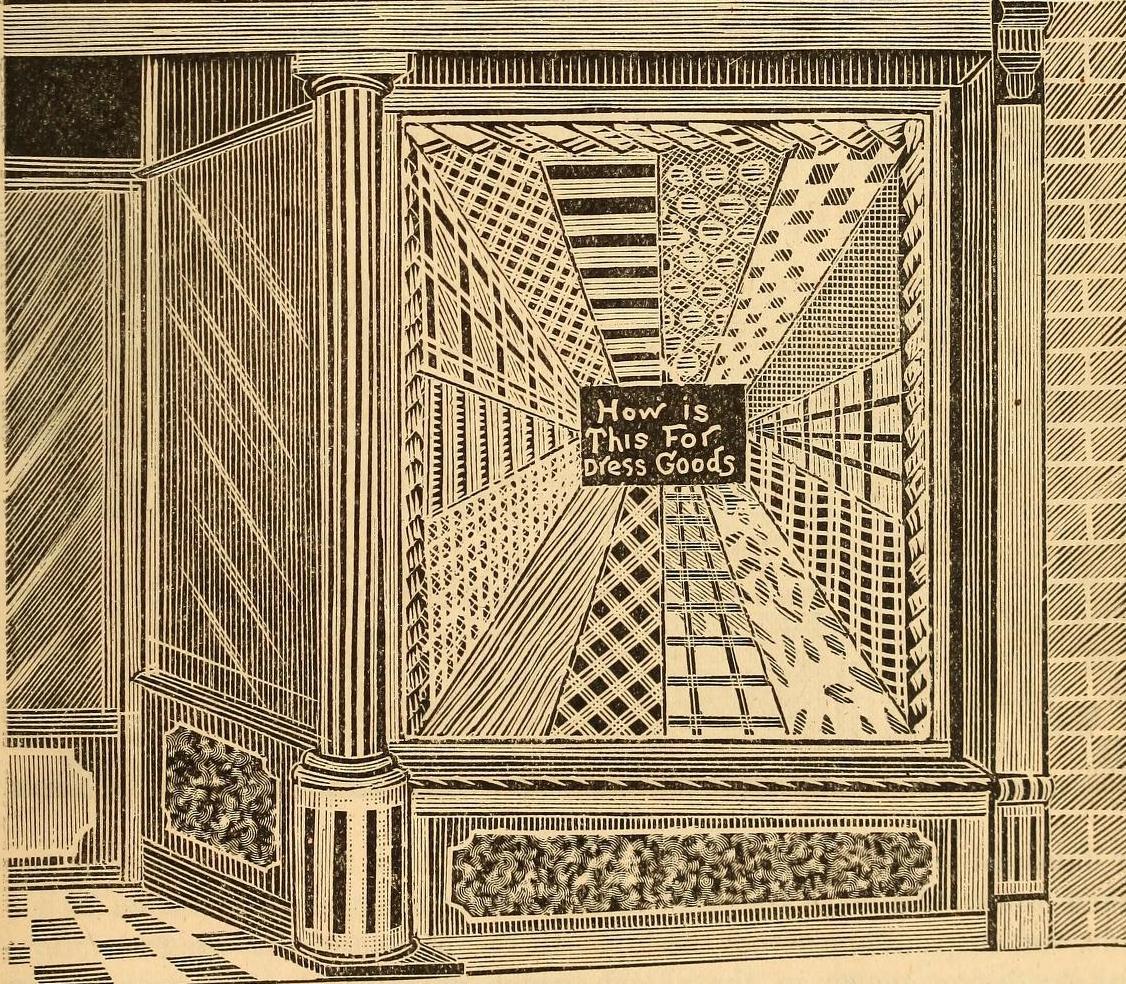 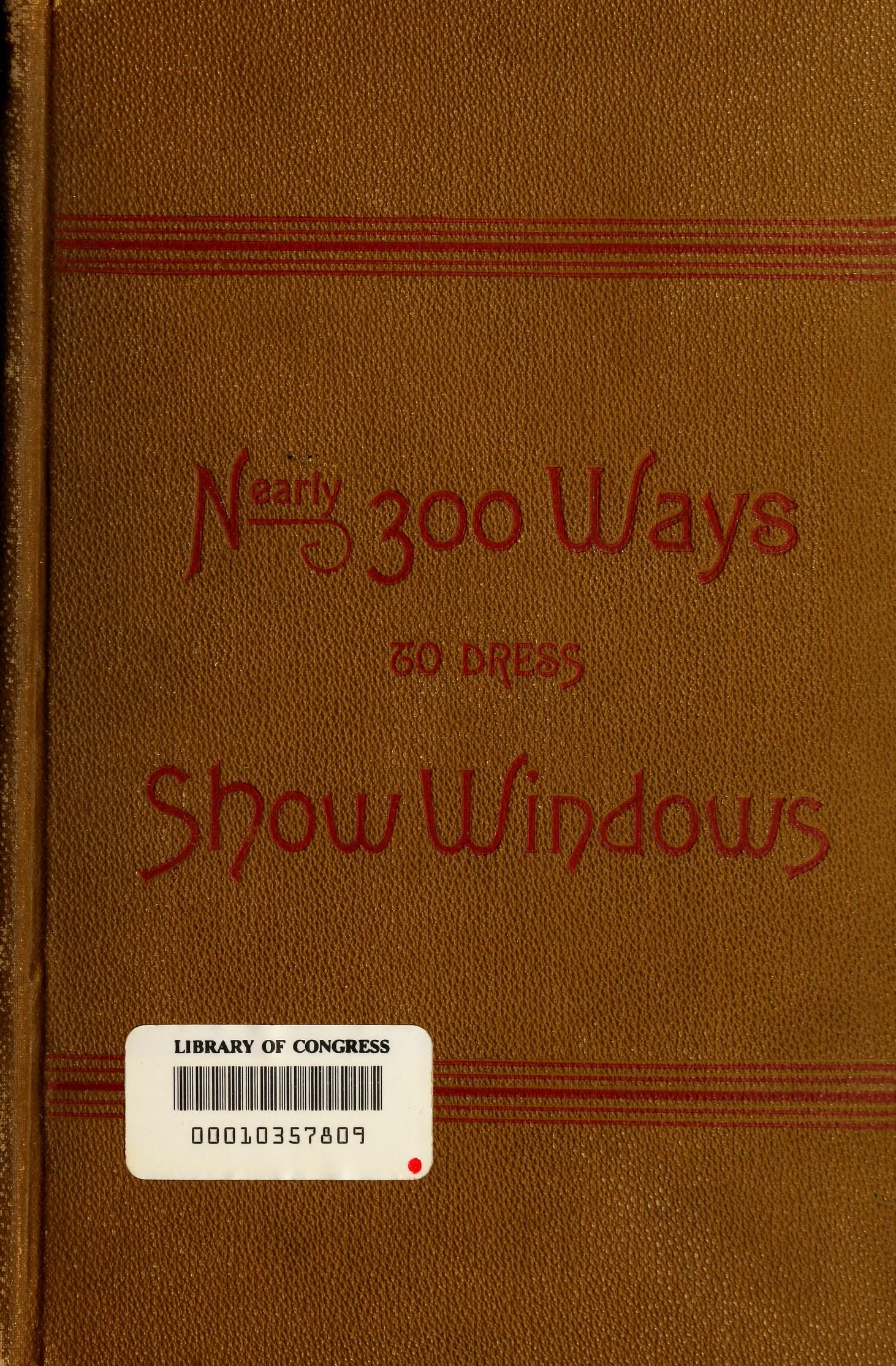