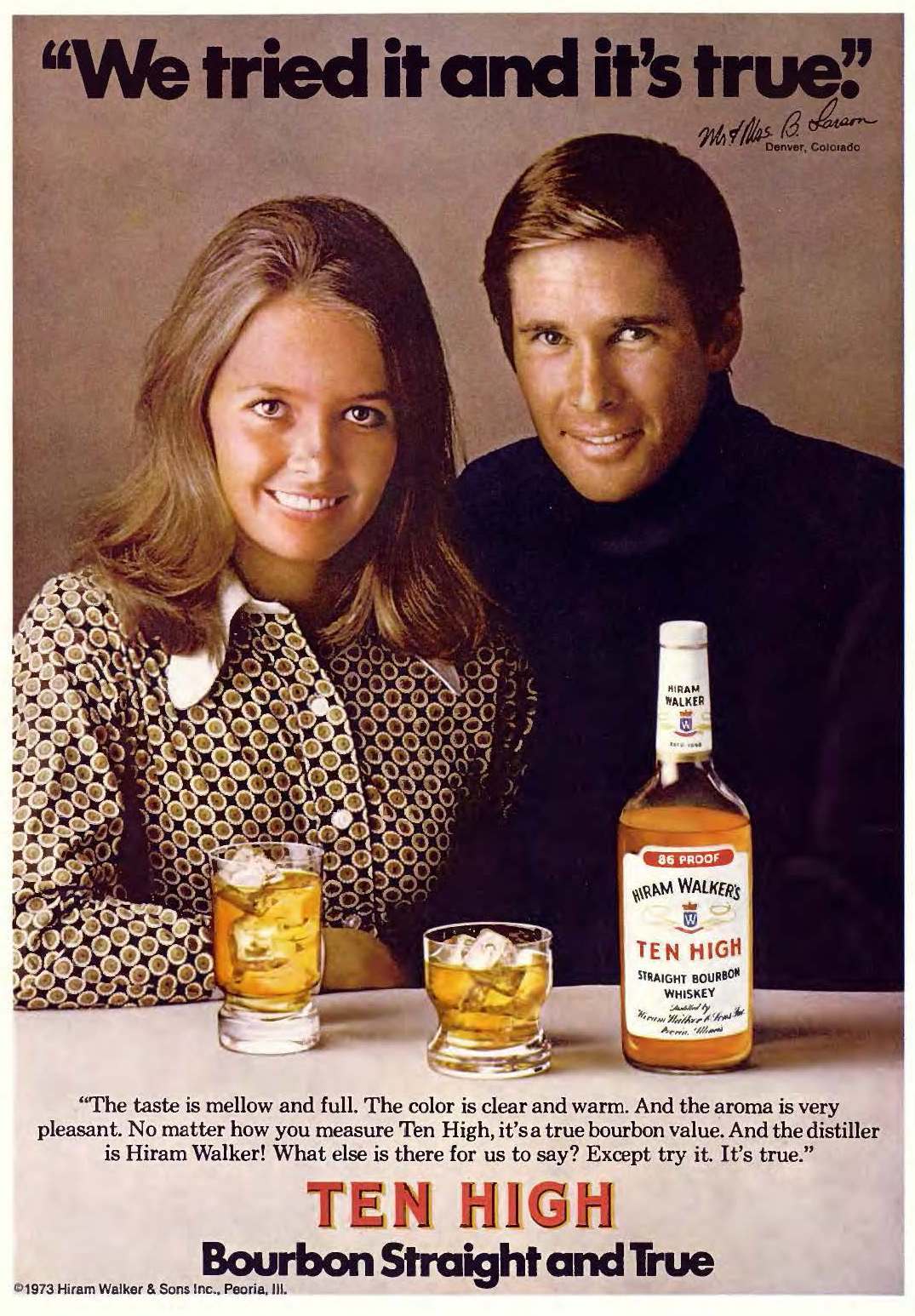 What did Mr. and Mrs. B. Larson try?  Of course it’s just a drink, but a part of your brain thinks something else altogether – and that’s the key.  The Baby Boomer generation was and still remains the largest generation – a massive volume of adults all reaching sexual maturity at roughly the same time.  The result: the Sexual Revolution… and Madison Avenue was simply not going to let that go unexploited. 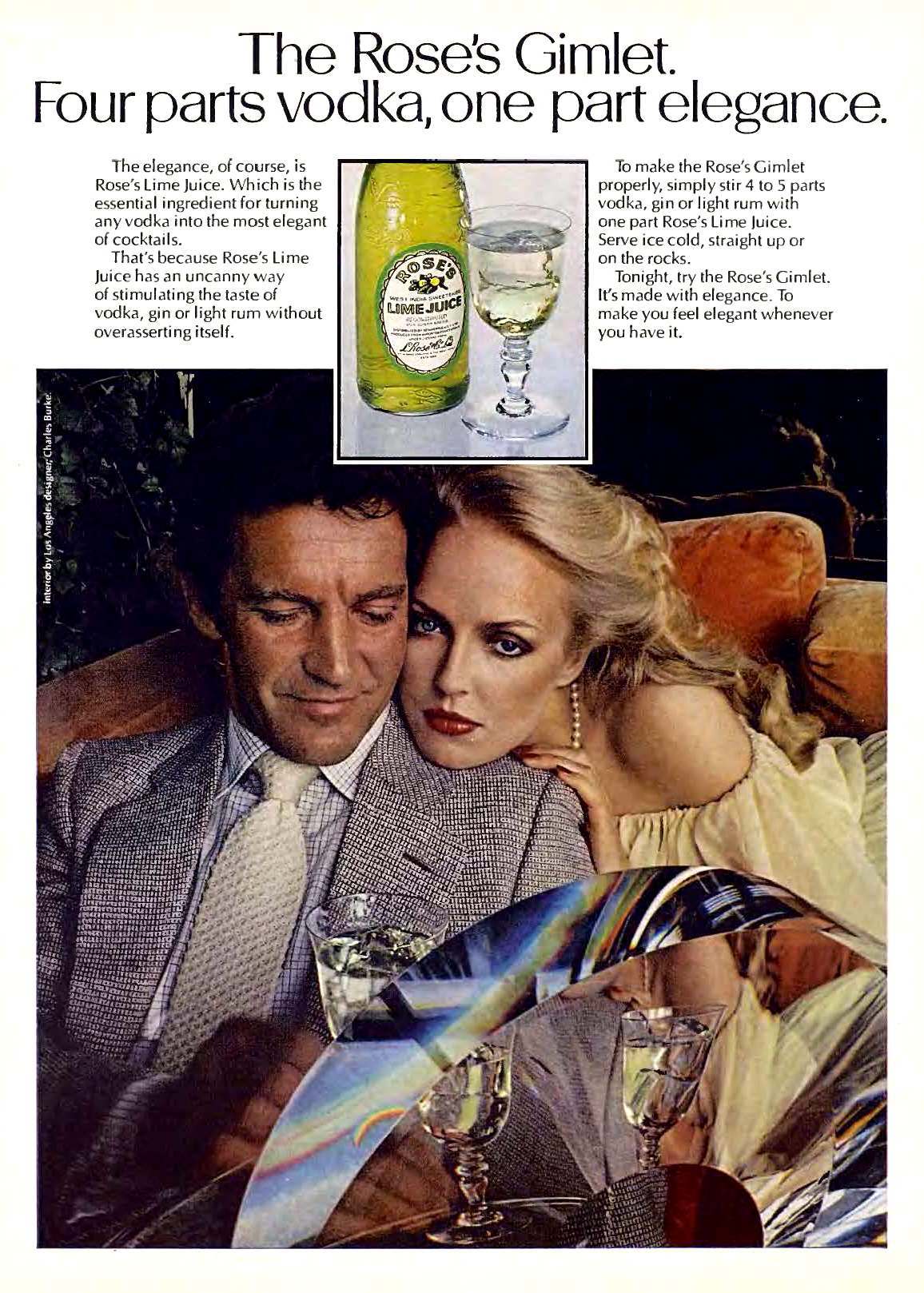 But let’s be clear – it’s not just about throwing a sexy lady in the advert (although that does help).  The true marketing genius was not only showing a sexy lady… but a sexy lady with some lucky guy.  Not just a happy couple either – a true fox and a random guy – sometimes handsome, sometimes not so much…. 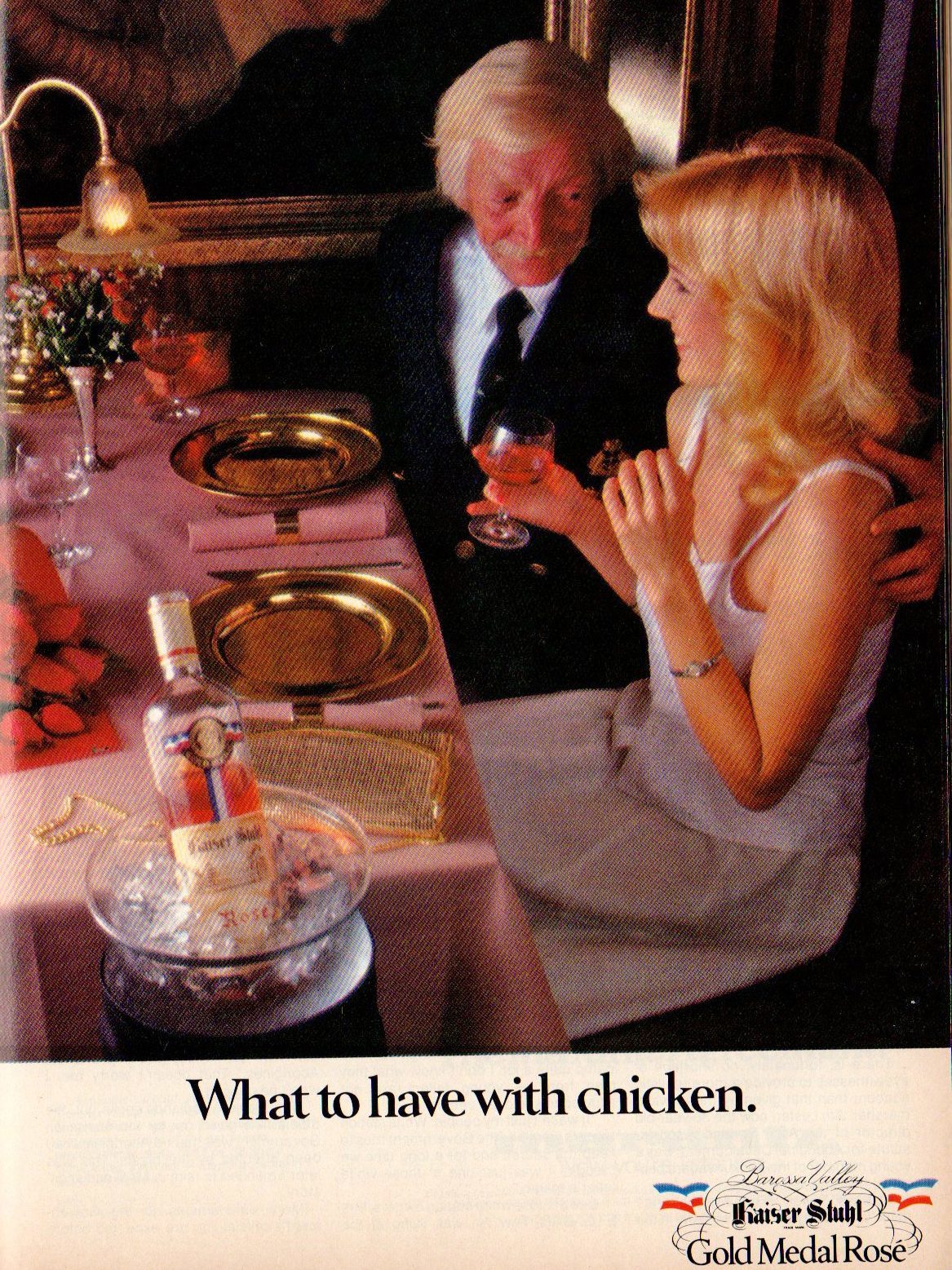 Yeah, it can get a little creepy, but you get the point: the booze peddlers want you to associate sexual happiness with their product.  As Don Draper said on Mad Men, “Advertising is based on one thing, HAPPINESS.” 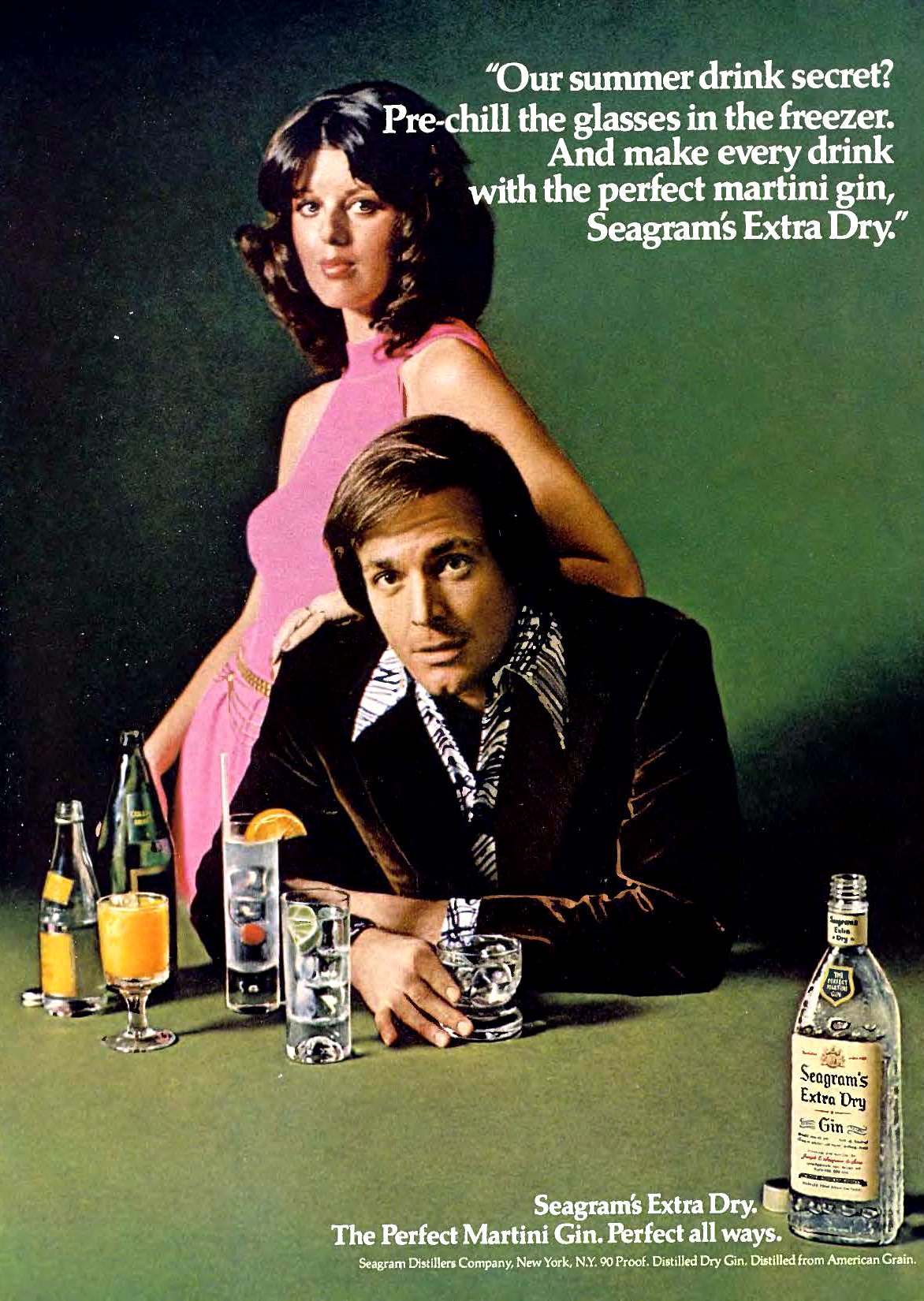 Of course, Don Draper also said, “But what is happiness?  It’s the moment before you need more happiness.”  The “happy couples selling booze” approach doesn’t just sell you sex, it sells you long term sex.  It’s not just a chick in a bikini selling tequila, it’s “you” and a smoking hot mama; all the guys will be jealous.  You came out of the hippie all-you-need-is-love revolution as a winner.  Now celebrate with a glass of Seagram’s Extra Dry Gin. 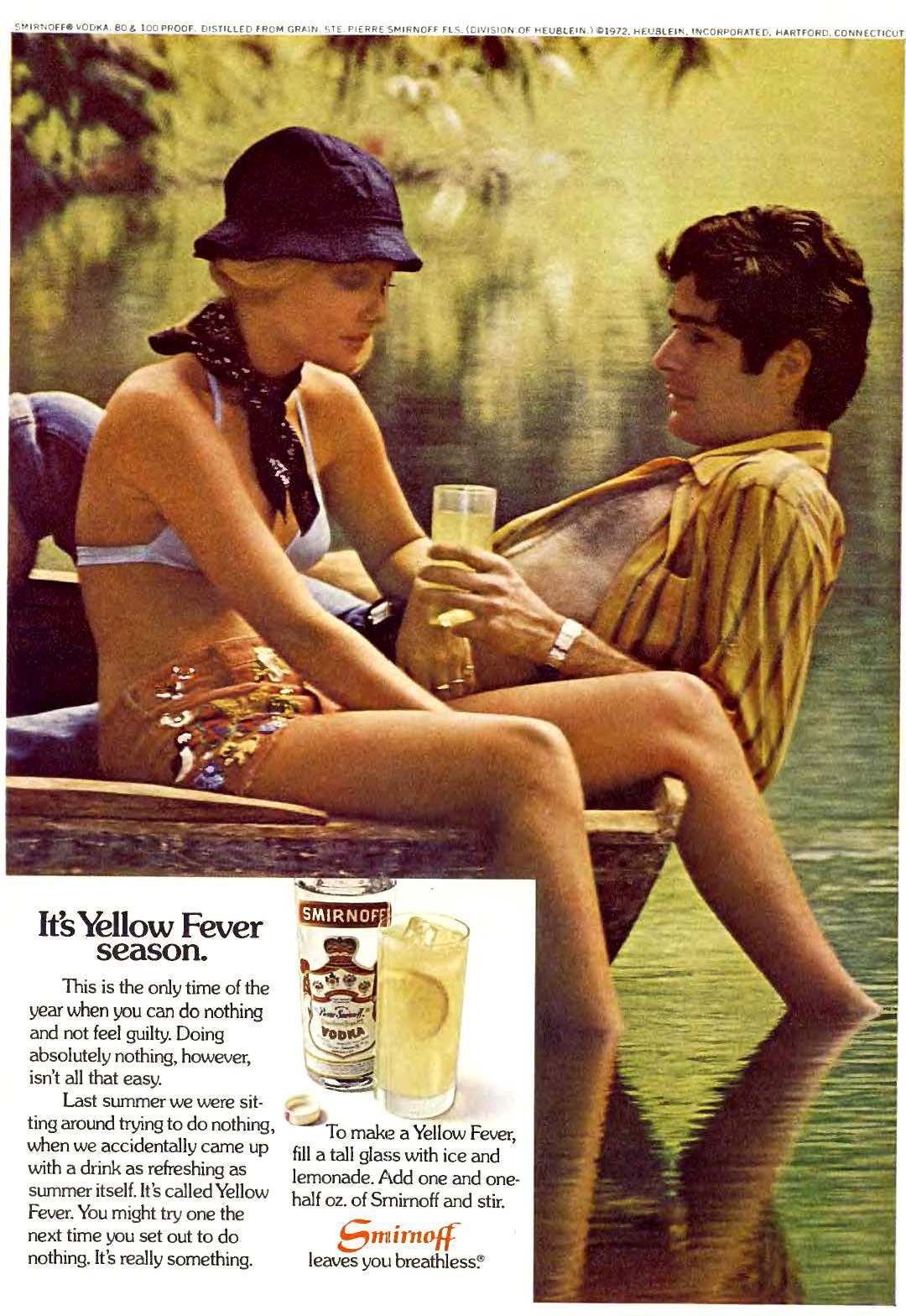 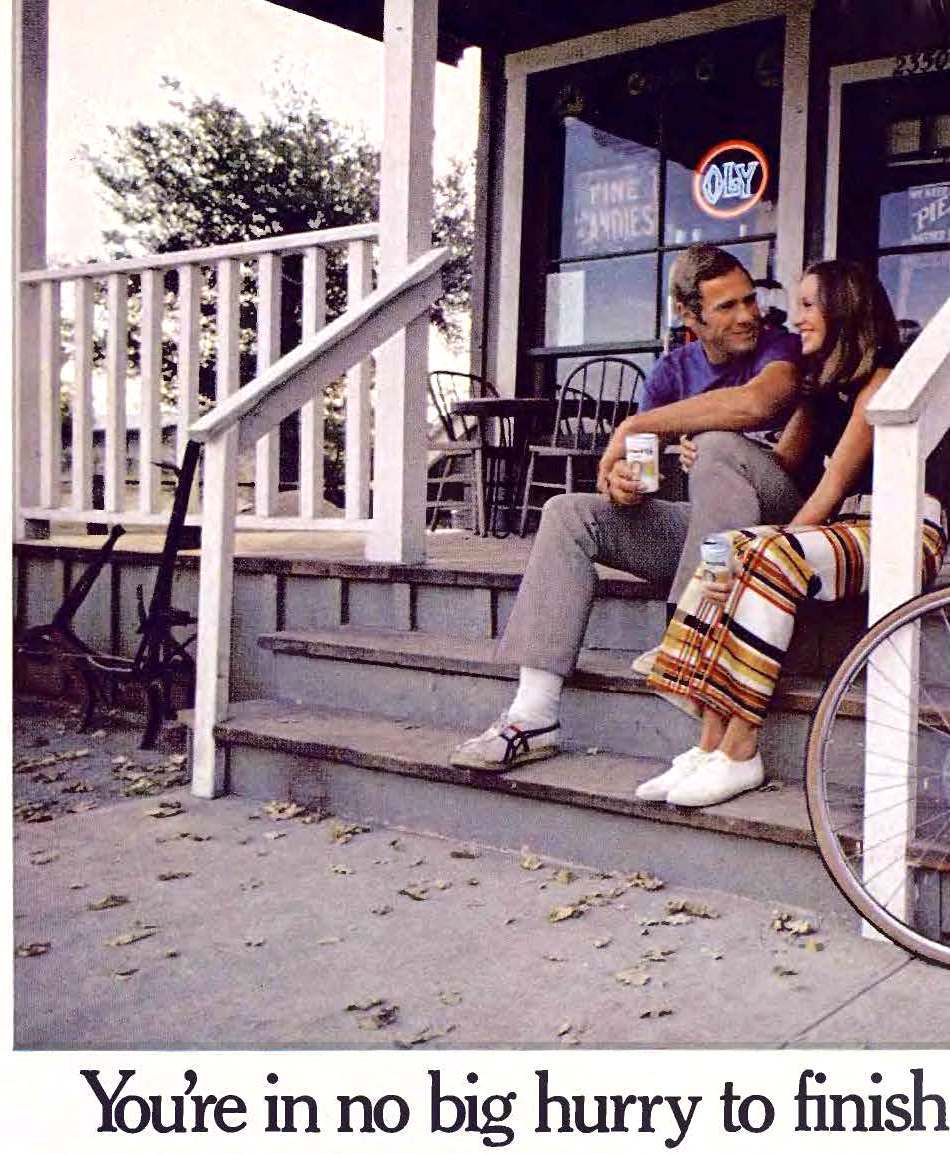 This 1972 Olympia Brewing Company advert pretty much sums it all up nicely.  The flower power days are over.  Time to find a stone cold fox and settle down – at least for a little while (you’ll notice that none of these make it clear there’s a marital string attached – and certainly no indication of kids).   A subtle sexual overtone to the text is the cherry on top. 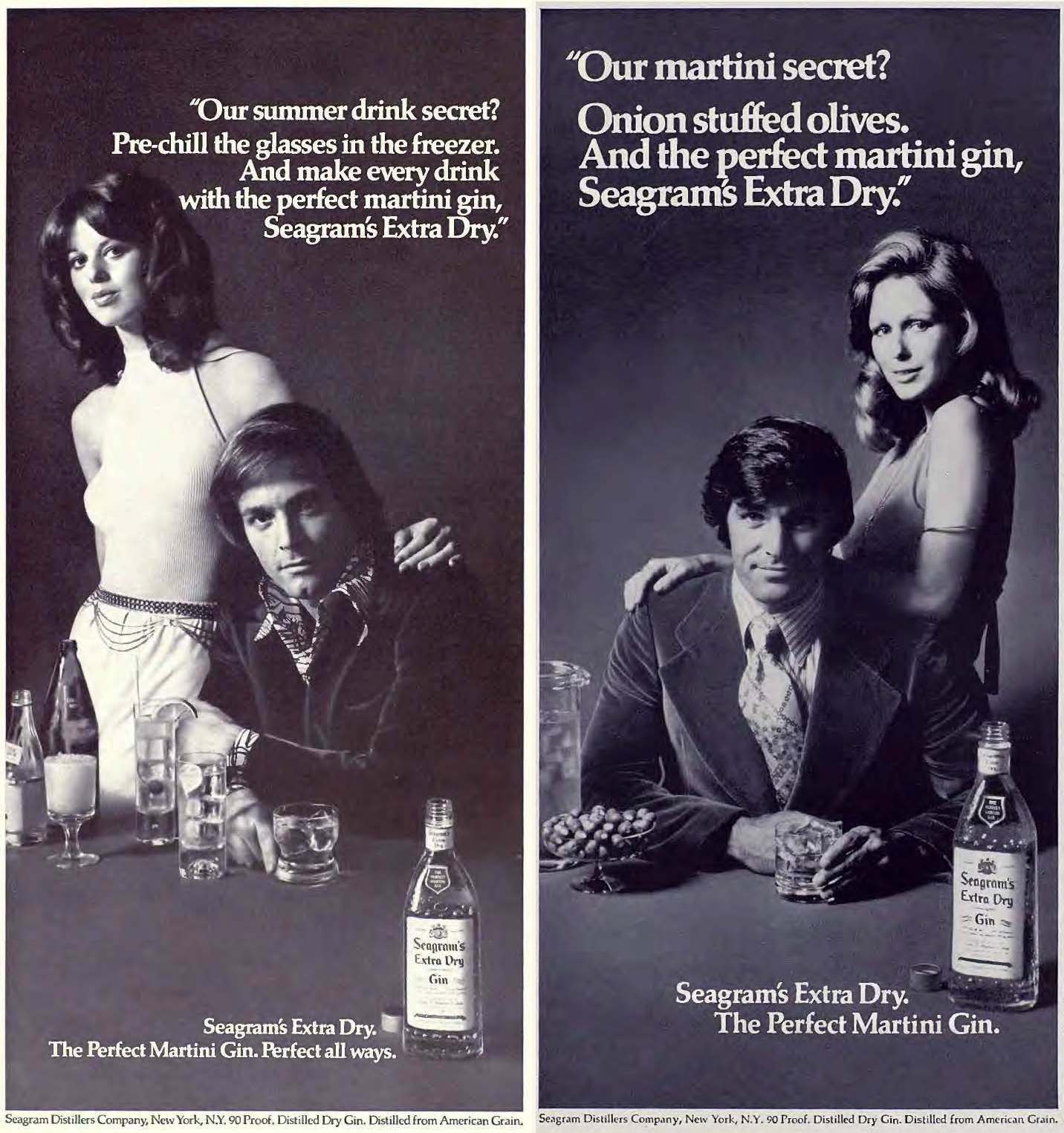 These guys never drink alone.  If you are – maybe Seagram’s will solve your problem. 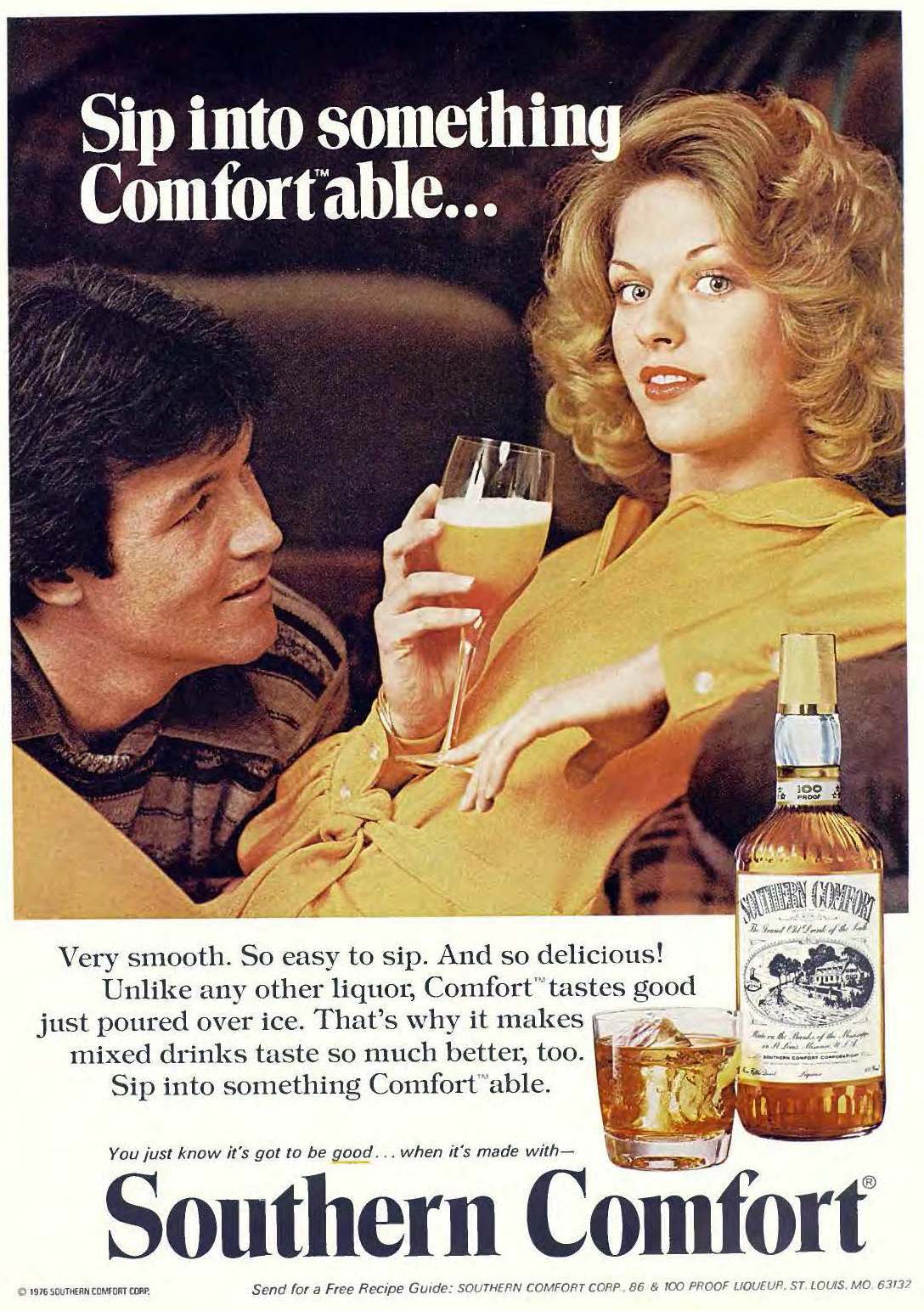 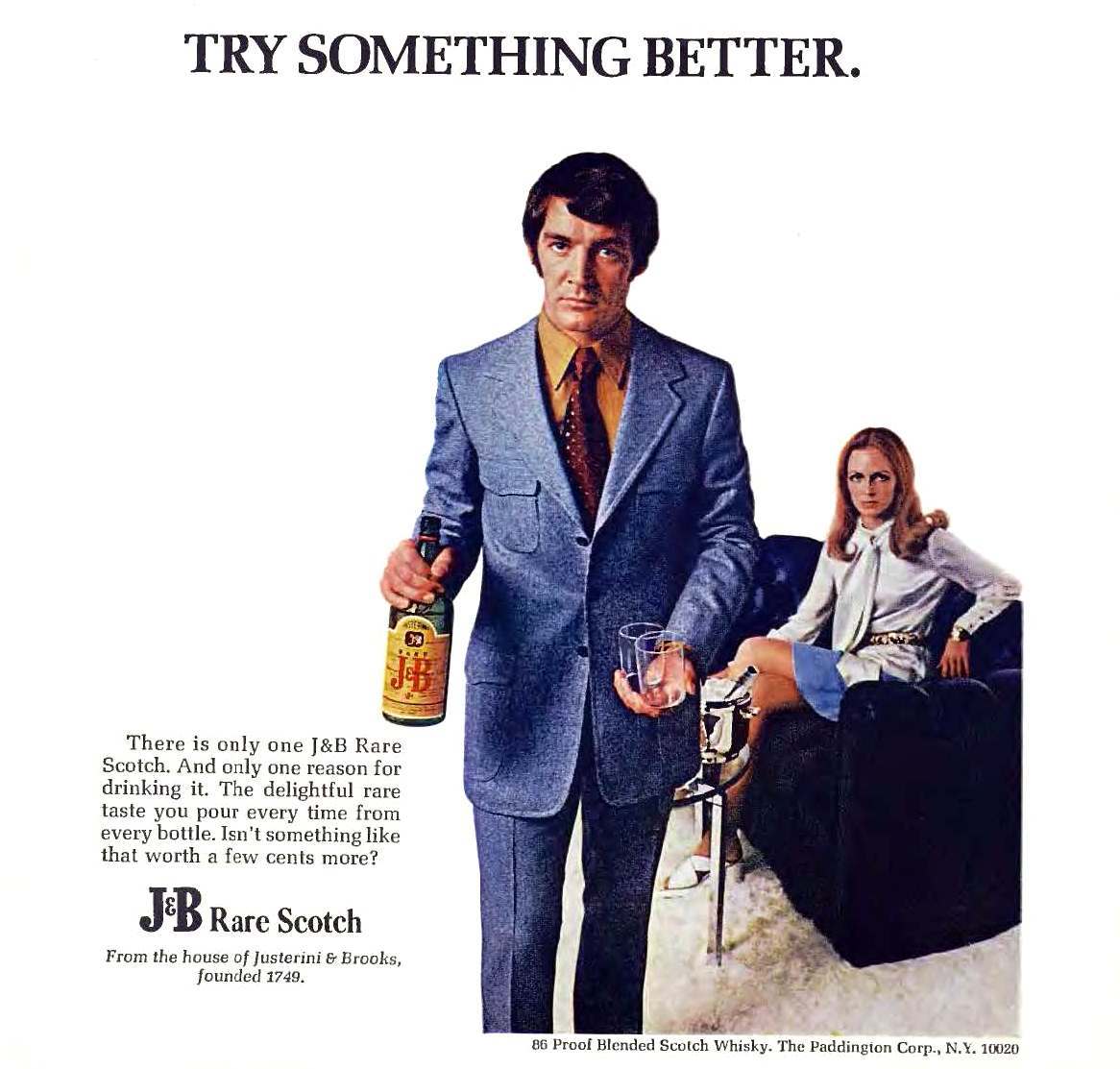 Of course, let it not be said that alcohol advertising didn’t just opt for the simple “sex sells” approach.  We covered this in Boozvertising: The Art of Selling Alcohol With Sex And A Stuffed Penguin.  However, the 1970s definitely was the era of the “lovebirds selling booze” approach.  Armchair sociologists reading this probably have their own theories as to why.  Whatever reason, advertisements must sell happiness, and Madison Avenue felt during the 1970s that this method provided the happiness Boomers sought. 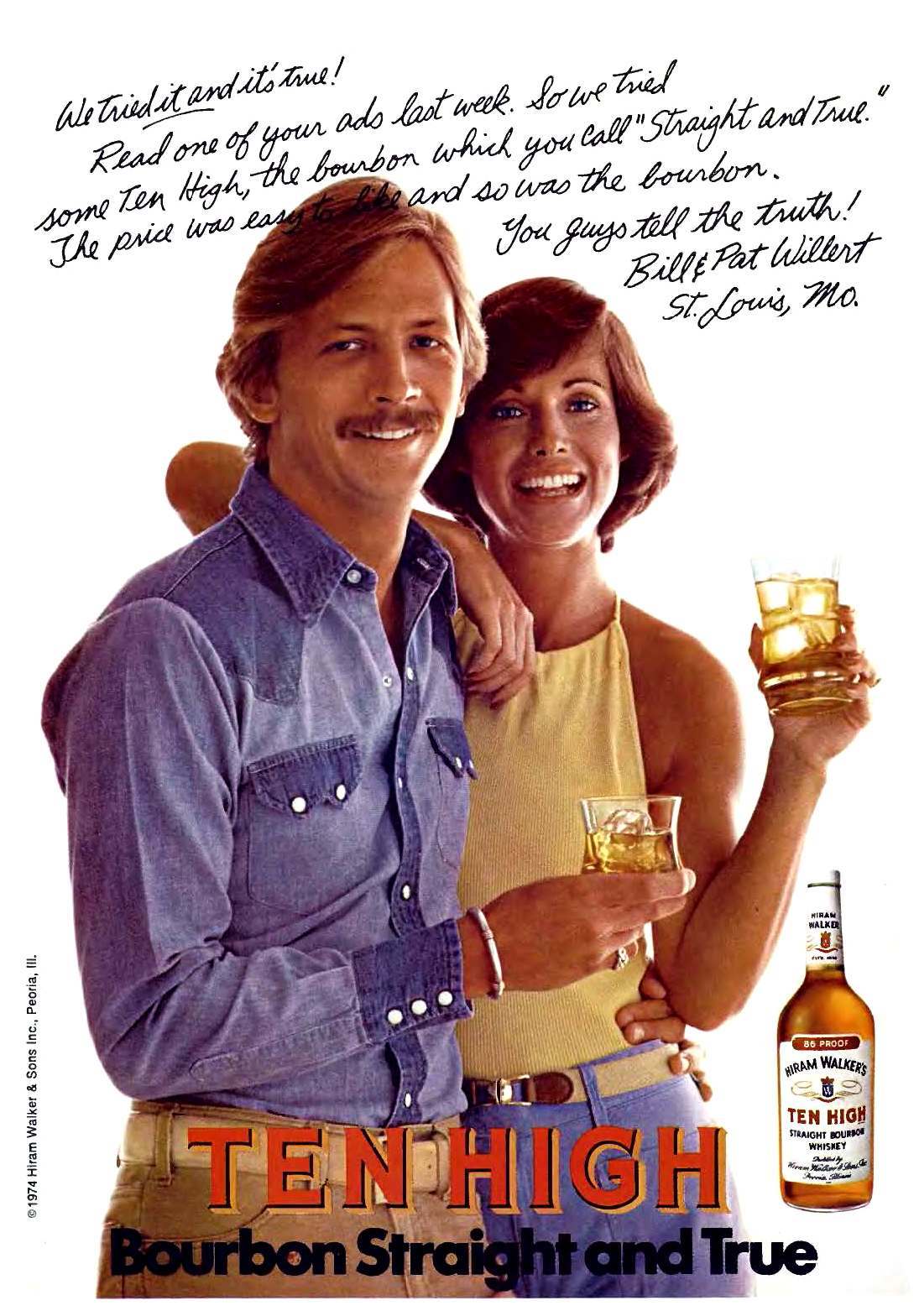 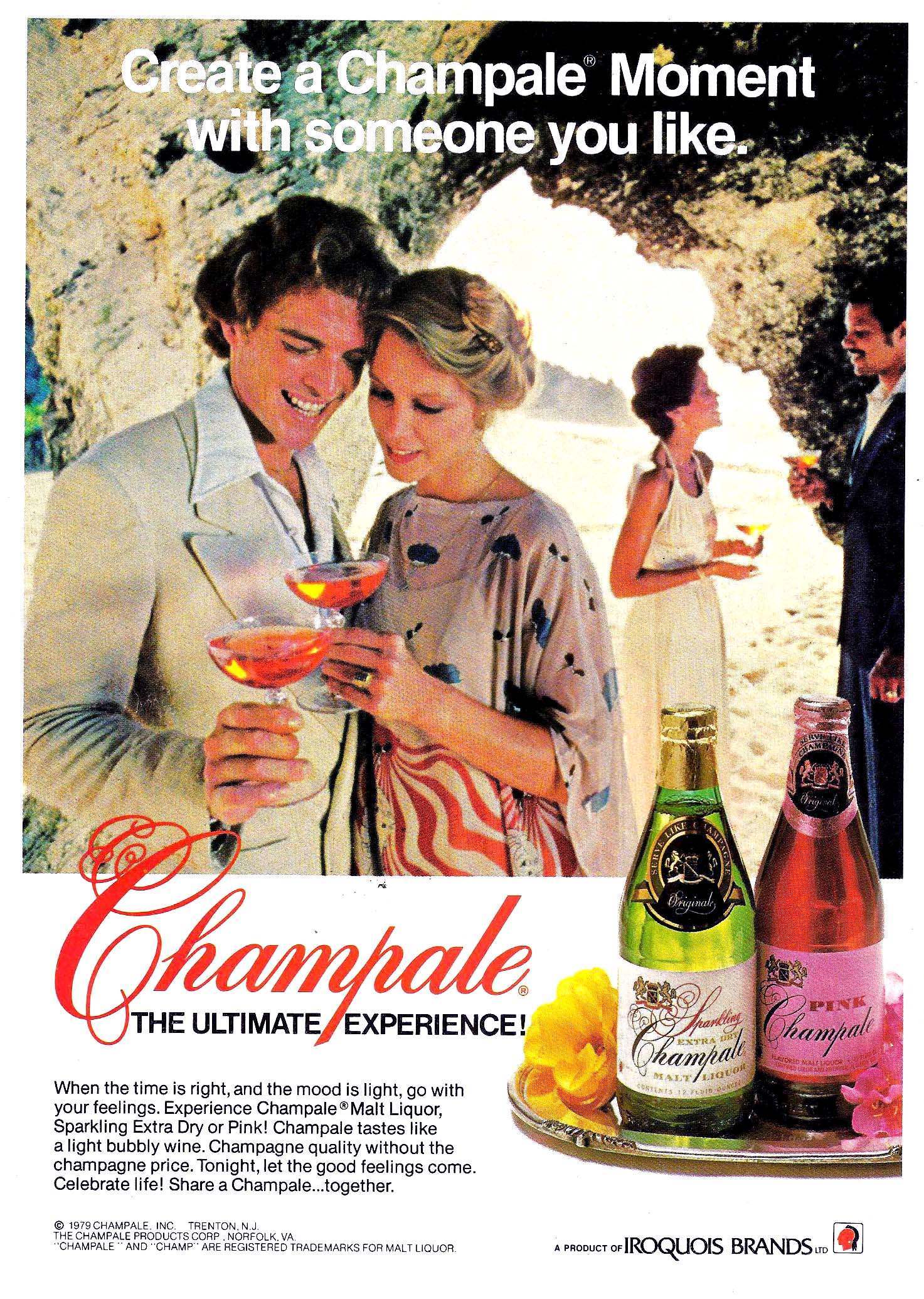 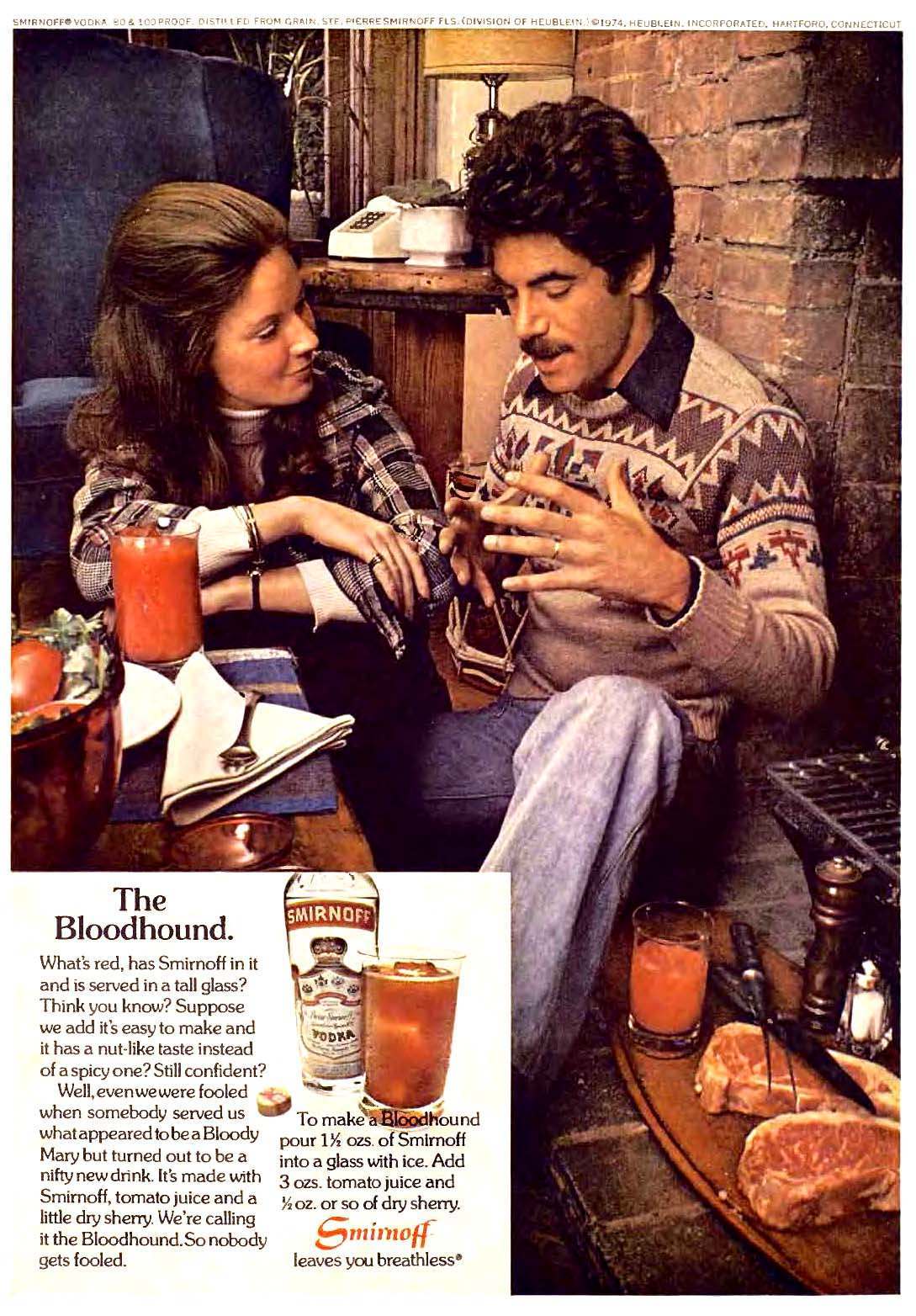 He’s got big-ass steaks and hot lady who’s totally hanging on his every word.  If this isn’t happiness then I don’t know what is. It’s hard not to let your mind wander into the gutter when speculating on what he might be describing to her 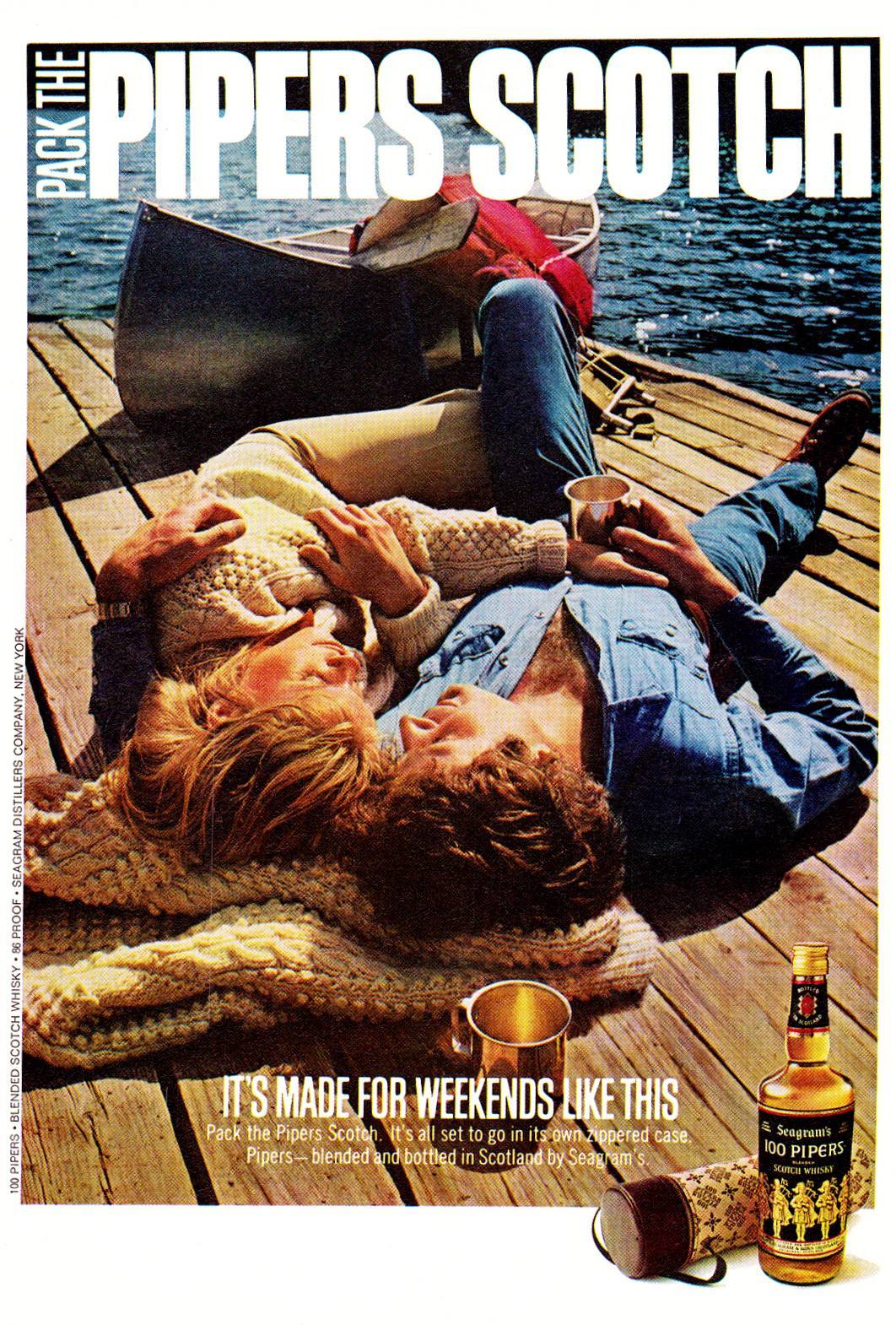 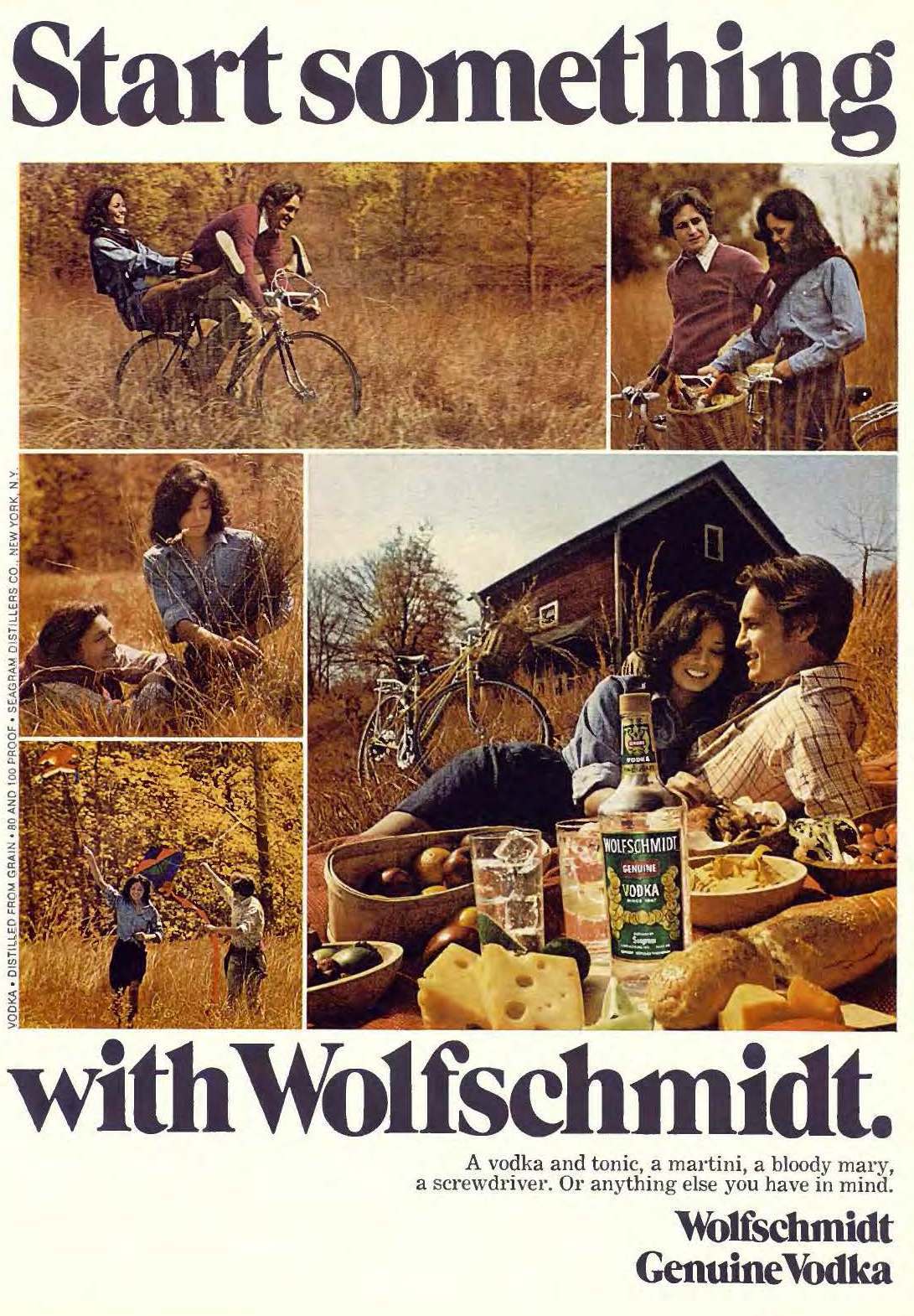 The current narrative of the 1970s is that all anyone wanted to do was have meaningless sex without consequences.  Does all this advertising prove the lie to that oversimplification?  Again – Madison Avenue is in the business of selling happiness, and it would appear that they are selling that via depictions of relationships.  The Wolfschmidt advert above says it plainly: “Start Something.” 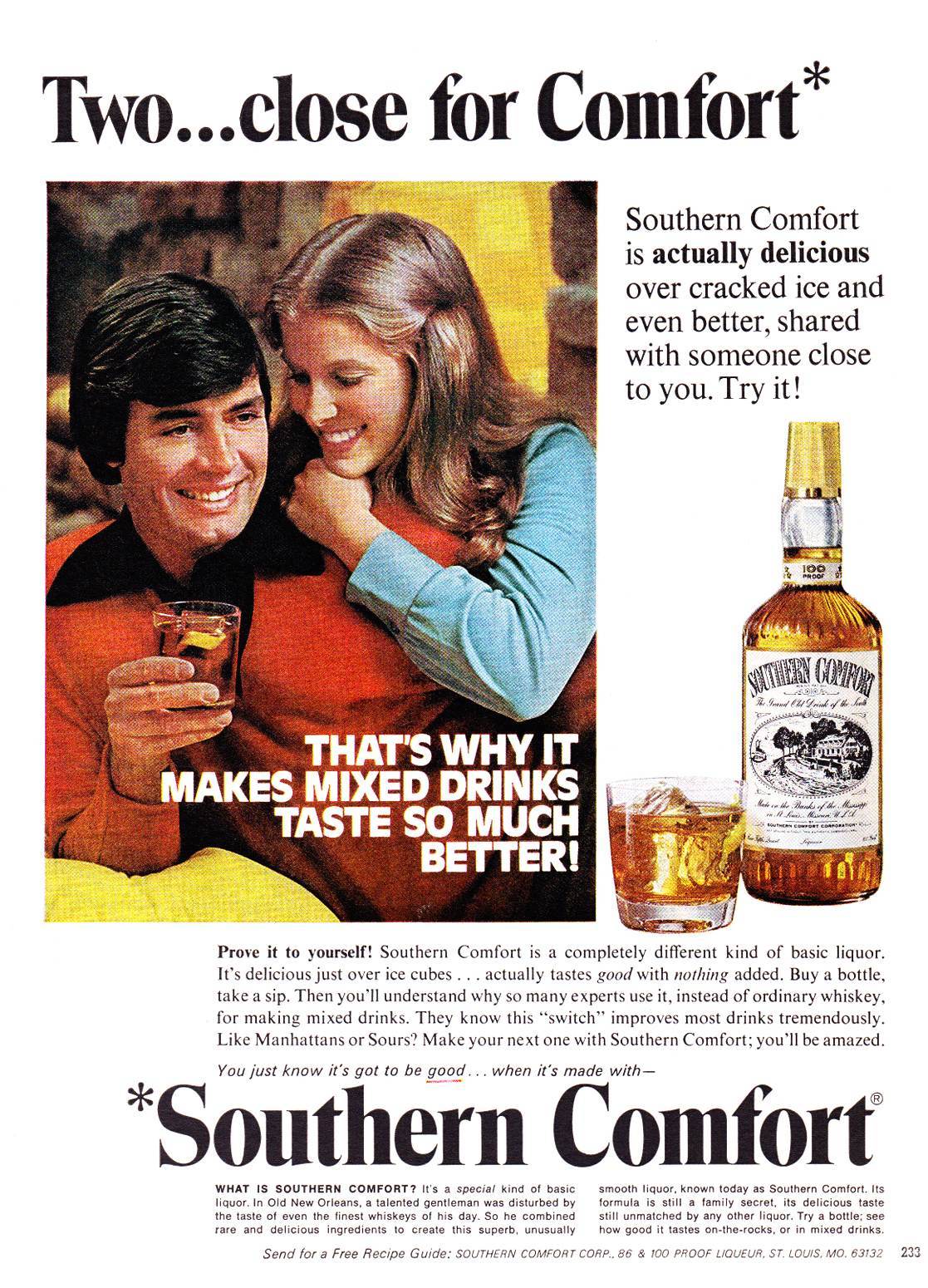 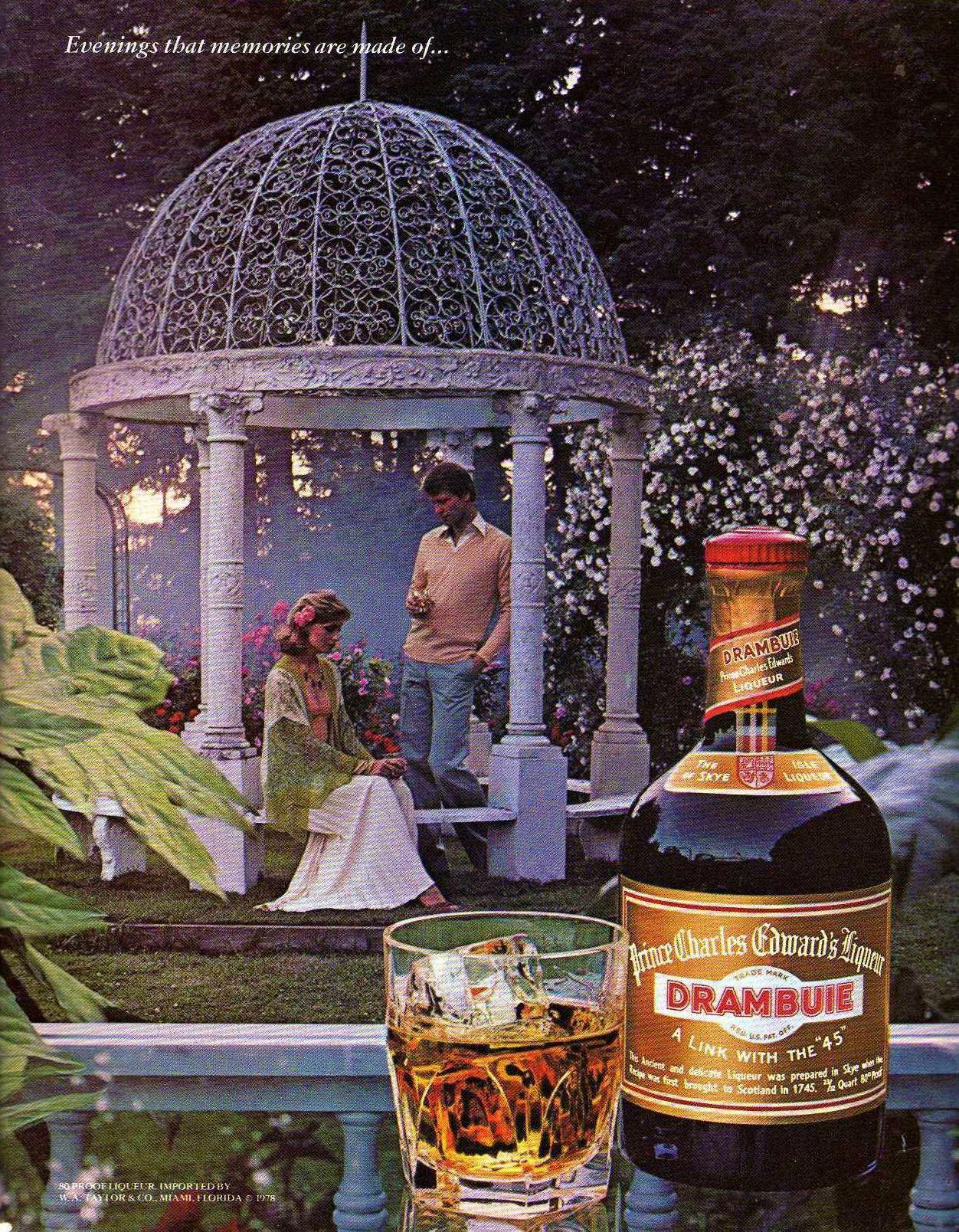