THE beautiful thing about hard liquor advertising is that it is rarely nuanced or boring. It opts for the ham fisted approach, beating consumers over the head with brazen sexual tactics.  After all, they’re not selling sofa pillows here, folks.  They’re selling booze, and that means things may get interesting… 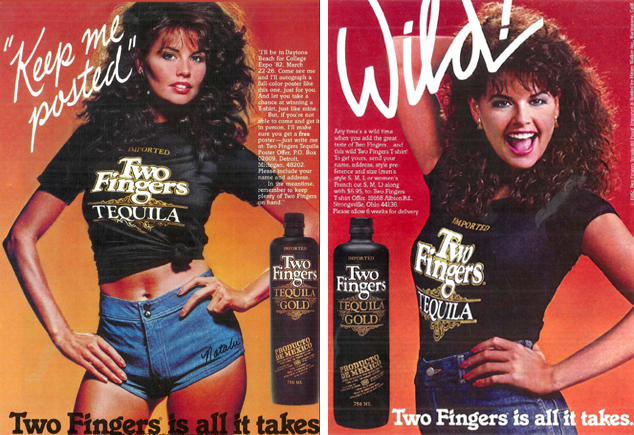 The “Two Fingers is all it takes” campaign begs the question – all it takes to do what?  Considering we’re talking about tequila, I assume it isn’t “improve your golf swing”.

It would have been interesting if the adverts finished their tagline with a bit of truthfulness, such as “Two Fingers is all it takes…. to impair your judgment and make terrible, life-changing mistakes.” 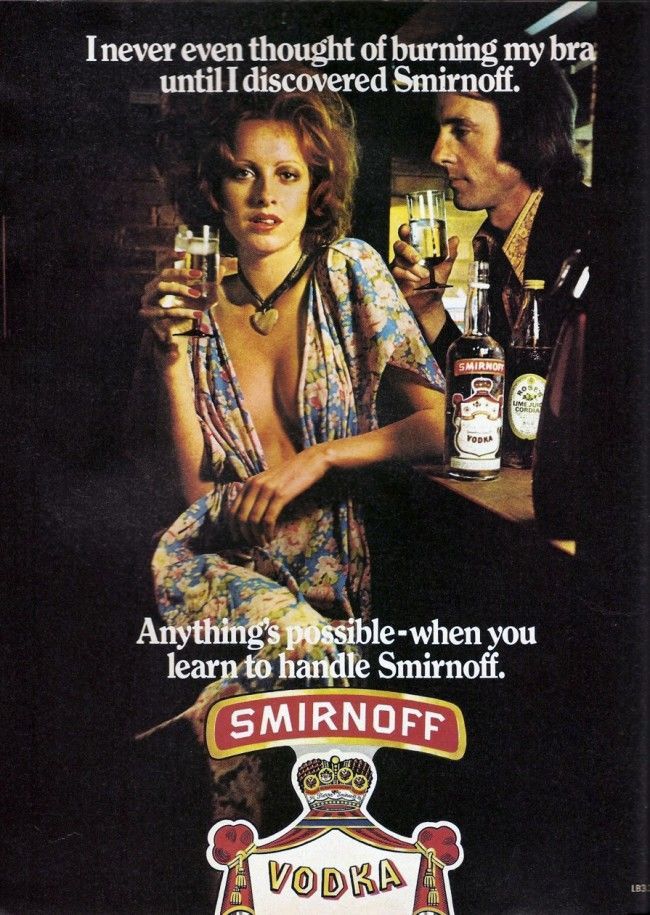 “I never even thought of burning my bra until I discovered Smirnoff.”

I don’t even get this.  Is she saying she didn’t believe in Women’s Lib until she starting drinking cheap vodka?  I guess I can relate.  I didn’t believe in Global Warming until I started huffing gasoline. (That was a joke, for those whose feathers are ruffled.) 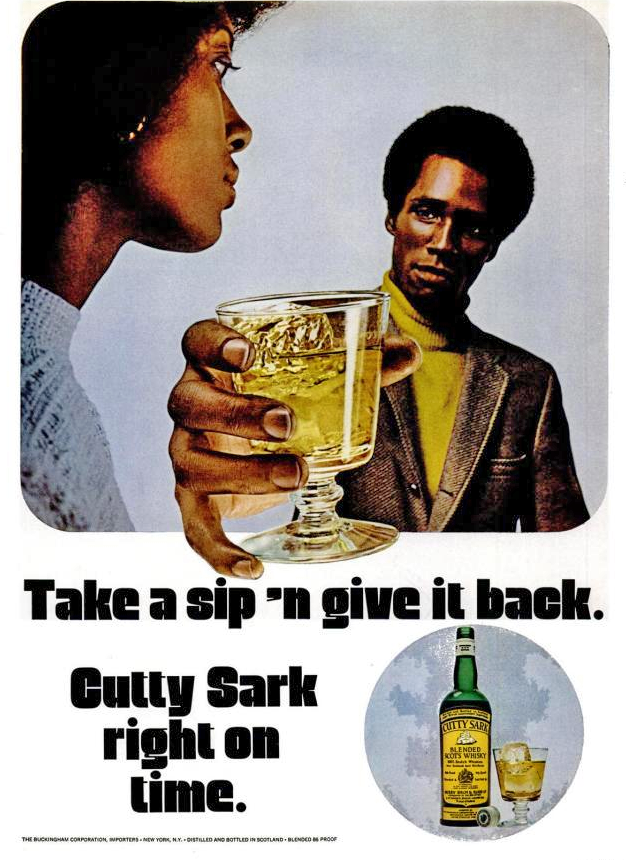 Was this advert inspired by the abusive relationship of Ike & Tina?  This just makes me uncomfortable.  If only this was a Pam Grier film, she’d knock that glass to the floor saying, “You didn’t say ‘please’, bitch!”

They don’t have a sense of humor at airport security like they once did.  You do this nowadays and, instead of a laugh, you’ll get tasered and pepper sprayed.  If they’re feeling particularly jovial, they may even throw in a thorough cavity search and a trip to exotic Guantanamo for free. 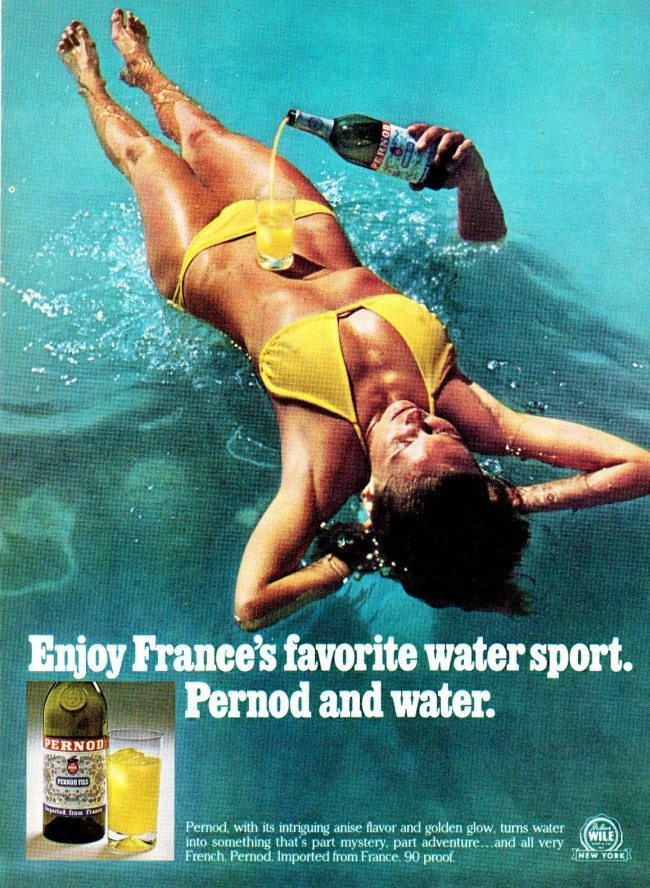 The “sex sells” approach has always been a key marketing strategy for alcohol.  A clever tag line is great, but nothing beats a pair of boobs in a booze advert.

Although, sometimes some thinly veiled sexual innuendo does the trick even better… 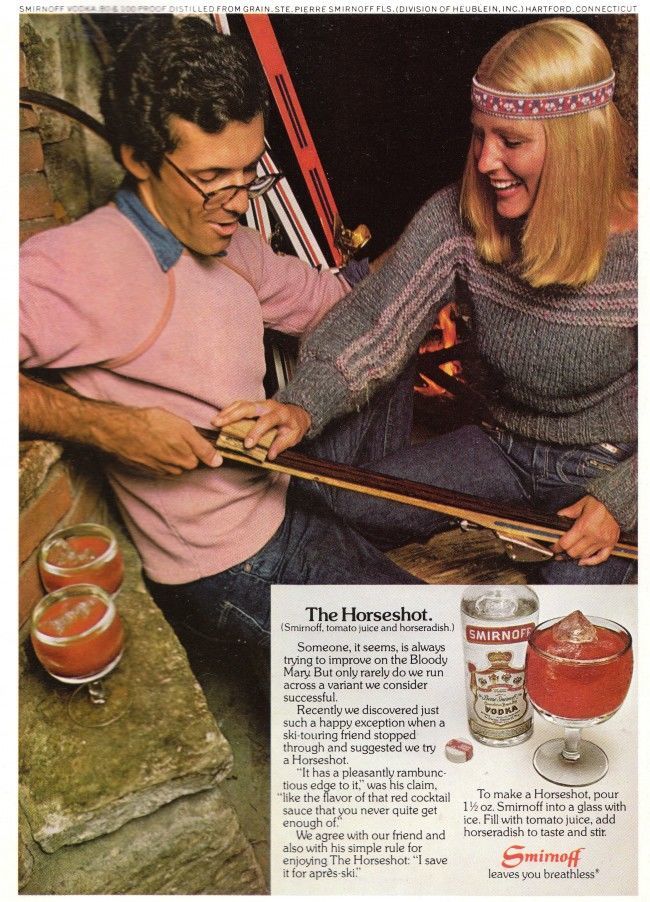 There’s definitely something phallic going on here.  It’s as if Sigmund Freud himself was in charge of the Smirnoff account. 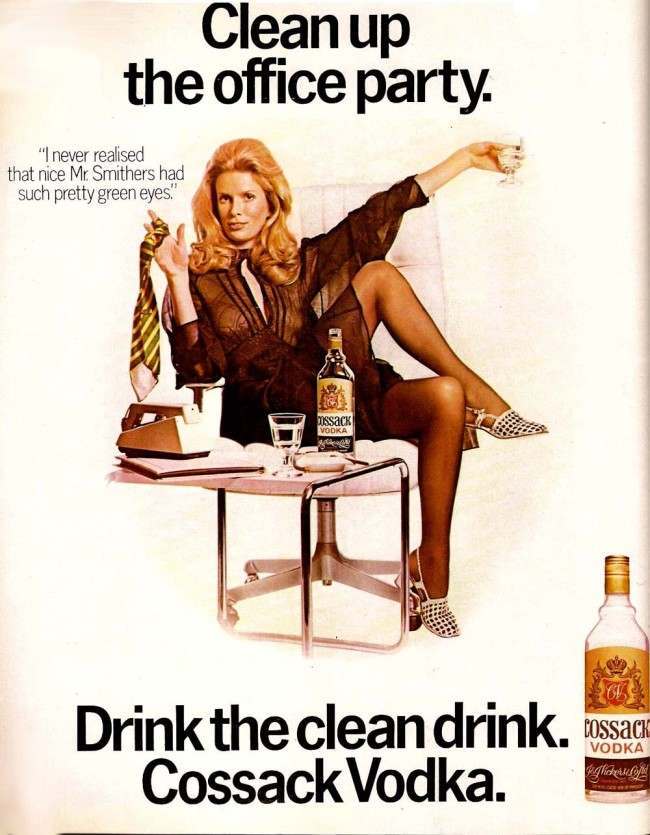 Translated literally:  “Your secretary will have sex with you, if you have lots of Cossack Vodka on hand.”

Presenting hard liquor as a gateway to otherwise impossible sexual relations was a common marketing strategy.  A perfect example is the following advert featuring a young Ali McGraw. 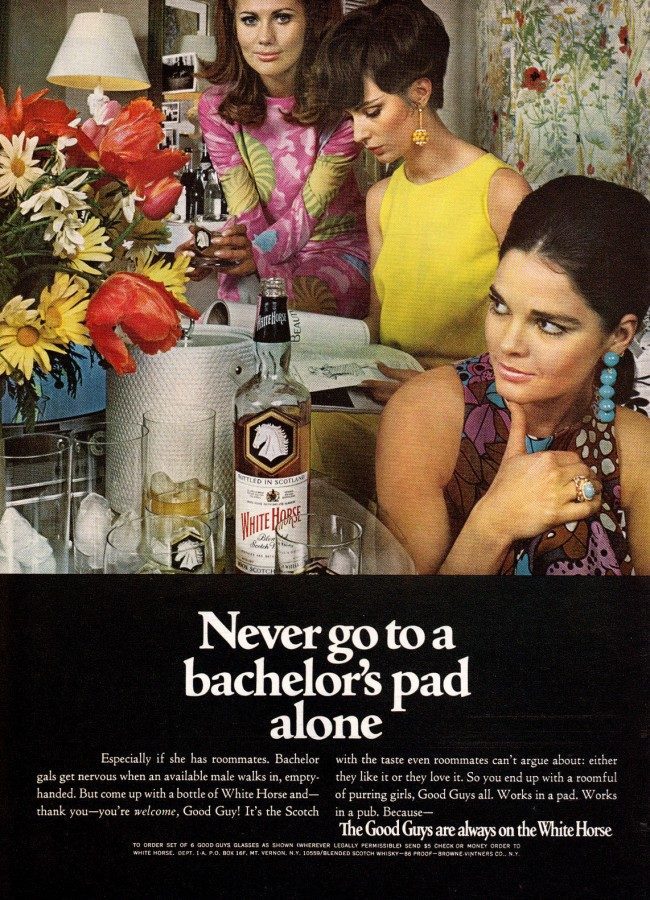 The text is spectacular:

“Never go to a bachelor’s pad alone… Especially if she has roommates.  Bachelor gals get nervous when an available male walks in, empty handed.  But come up with a bottle of White Horse and – thank – you’re welcome, Good Guy!  It’s the Scotch with the taste even roommates can’t argue about: either they like it or they love it.  So you end up with a roomful of purring girls, Good Guys all.  Works in a pad.  Works in a pub.  Because – the Good Guys are always on the White Horse.”

Quite literally, this bottle of Scotch will act as a pheromone, luring hordes of “purring” babes to your bachelor pad so you can have sex with them- all of them. 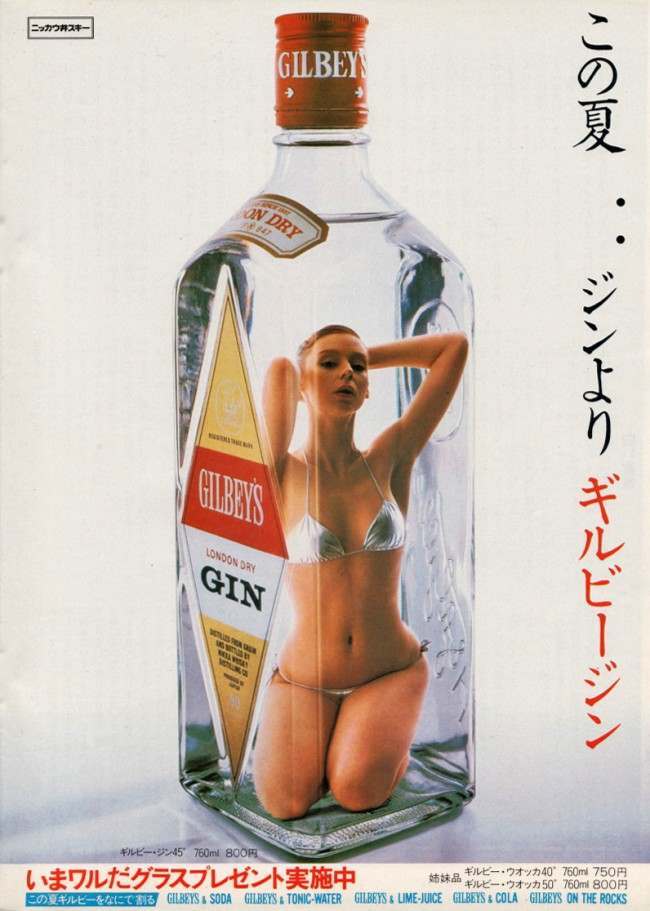 Lest you imagine the “sex sells booze” approach was strictly a Western thing, this advert clears up any misconception.  Asian advertisers were wise to the selling power of a chick in a silver bikini living in an empty gin bottle.  You might say Japanese were the greatest experts of them all. 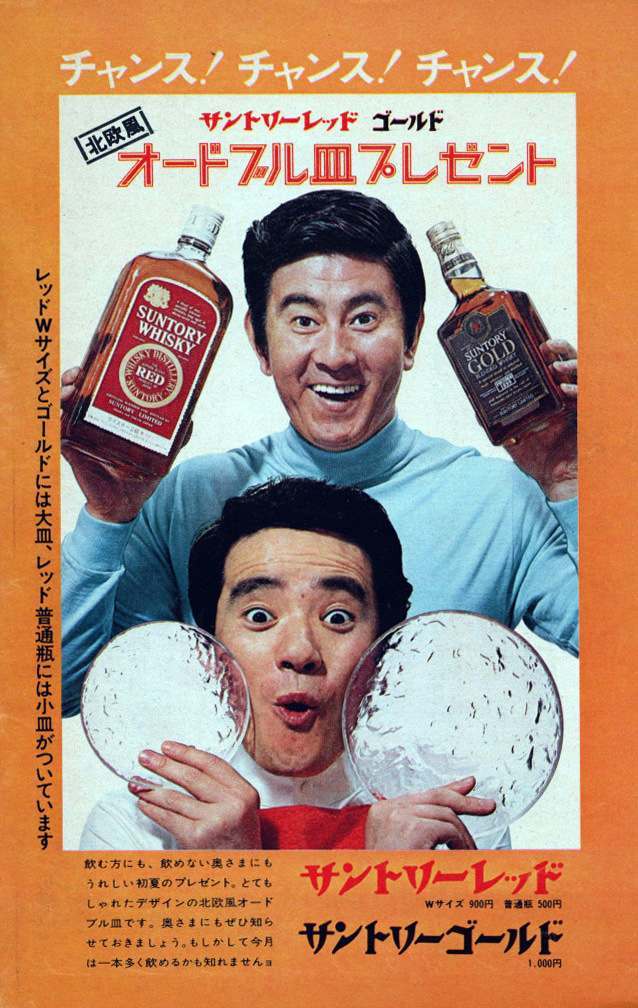 Then again, the Japanese also made insanely stupid ads like this one, completely undermining my previous statement.  Of course, when it comes to booze adverts, the Japanese by no means have a monopoly on stupidity…. 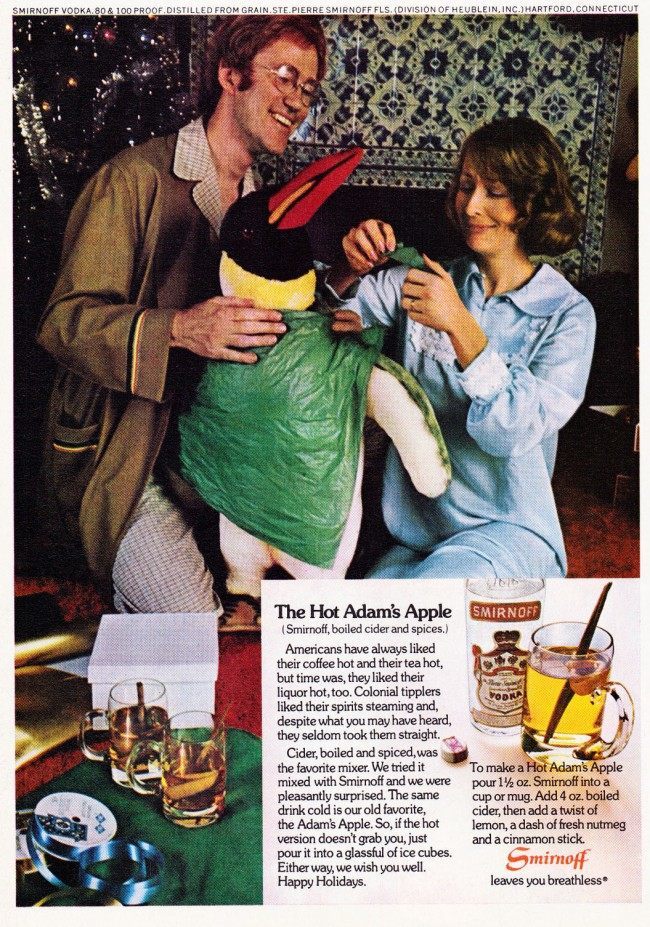 What the-? This is how I image the Madison Avenue brainstorming session went for this one:

Jim:“I think we should go with a smoking hot babe wearing a tiny bikini, holding a bottle of vodka while splayed out on a bearskin rug.”

Fred:”I think we should go with a homely couple inexplicably taping a plastic bag to a stuffed penguin.” 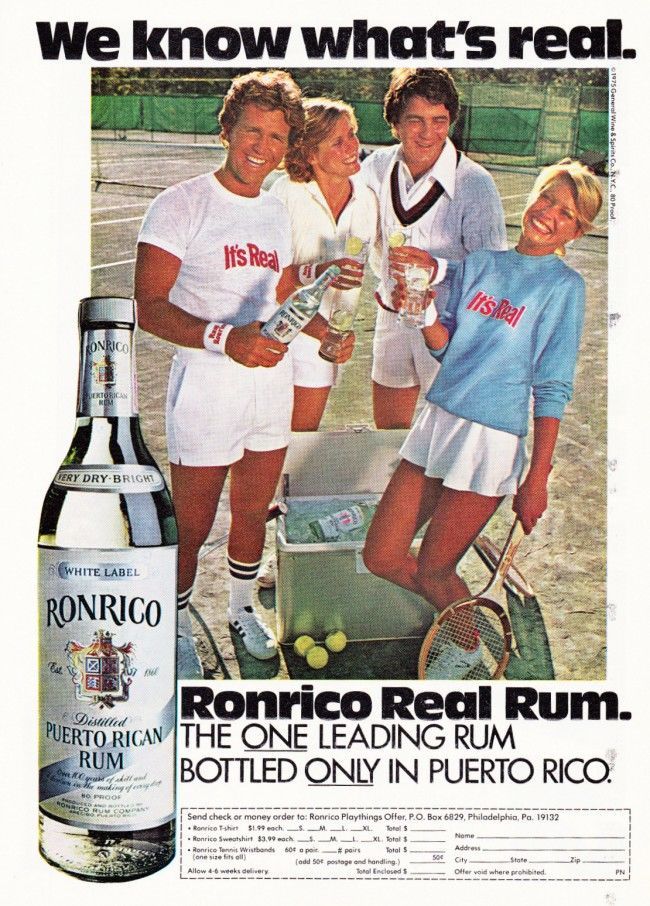 Her shirt reads “It’s Real”.  I suppose it’s better than “They’re Fake”, but still not the greatest thing to emblazon across a female’s breasts.  She already looks a little tipsy, so she probably doesn’t care. 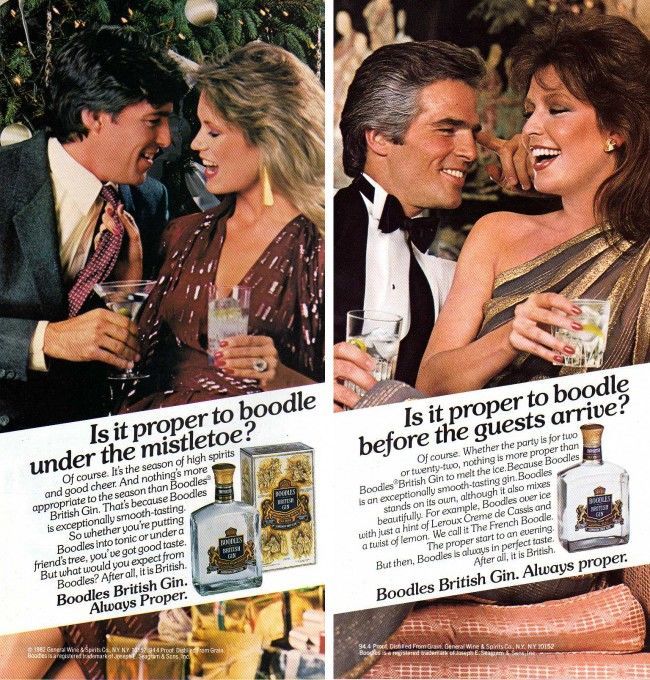 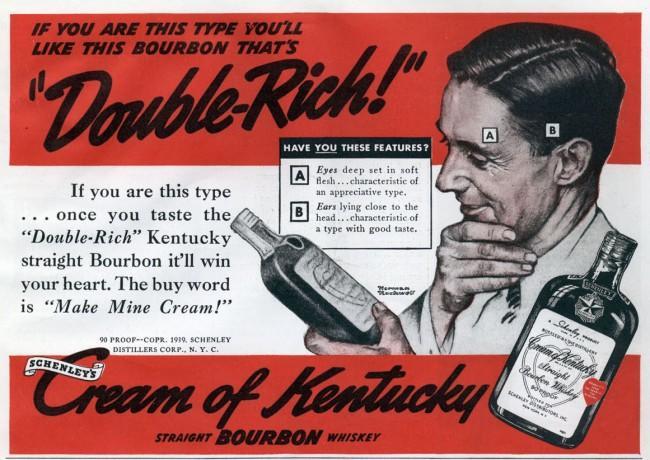 I guess we can deduce that those of you with protruding eyes and big ears have terrible taste.  You can’t argue with genetics.