Sometimes it’s okay to take an old song and use it in a commercial. Was it so wrong to use “Fun, Fun, Fun” by The Beach Boys in a Carnival Cruise Line commercial? Was it all that terrible to use Robert Palmer’s “Simply Irresistible” in an Applebee’s commercial? Sometimes, it’s okay…. and sometimes it’s not.

When a song actually meant something to a generation, when it impacted people in a profound way and was part of the fabric of the culture – it should not be used to sell hamburgers. “Born To Be Wild” should not have been used to sell Fords, just on sheer principle. Do you remember the outrage when “Revolution” was used to sell sneakers? We’ve become accustomed to it now.

The worst case scenario is when they become connected to embarrassing products such as adult diapers and stool softeners.  Or perhaps even worse, when they are grabbed simply for their “appropriate” title or lyrics to suit the product.  For example, “Should I Stay or Should I Go?” by The Clash is a song about nothing really. Some speculate it’s about the band’s dysfunction, some say it’s about girlfriend Ellen Foley. Whatever the case, it was a rockin’ good song; an anthem for kids of that era…. And now it’s showing up in ChoiceHotels.com commercials. Something just feels wrong about this.

What feels wrong is that this post-punk rock anthem was chosen due to its convenient title, and it just seems silly. “Should I Stay or Should I Go?” has relevance for a hotel business – get it? (groan) Here’s a handful of other songs similarly put to unfortunate commercial use…

“Time of the Season” by The Zombies
Tampax tampons 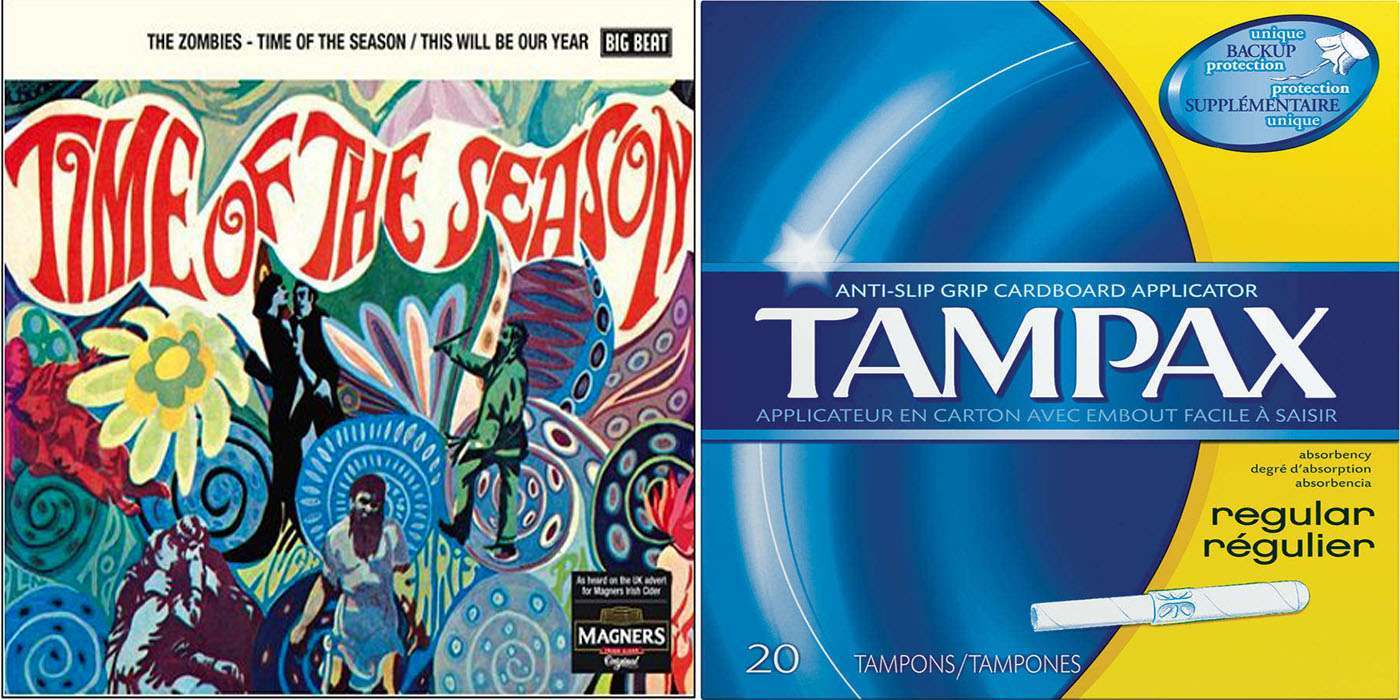 Odyssey and Oracle is an amazing album – a combination of baroque pop and psychedelia that is often overlooked as one of the great LPs of the era. If “Time of the Season” had been plucked out and inserted into a feminine hygiene product commercial in the late 1960s, there would have been widespread outrage. But that was when commercialization of music was seen as an unforgivable offense. Now, it’s just great. 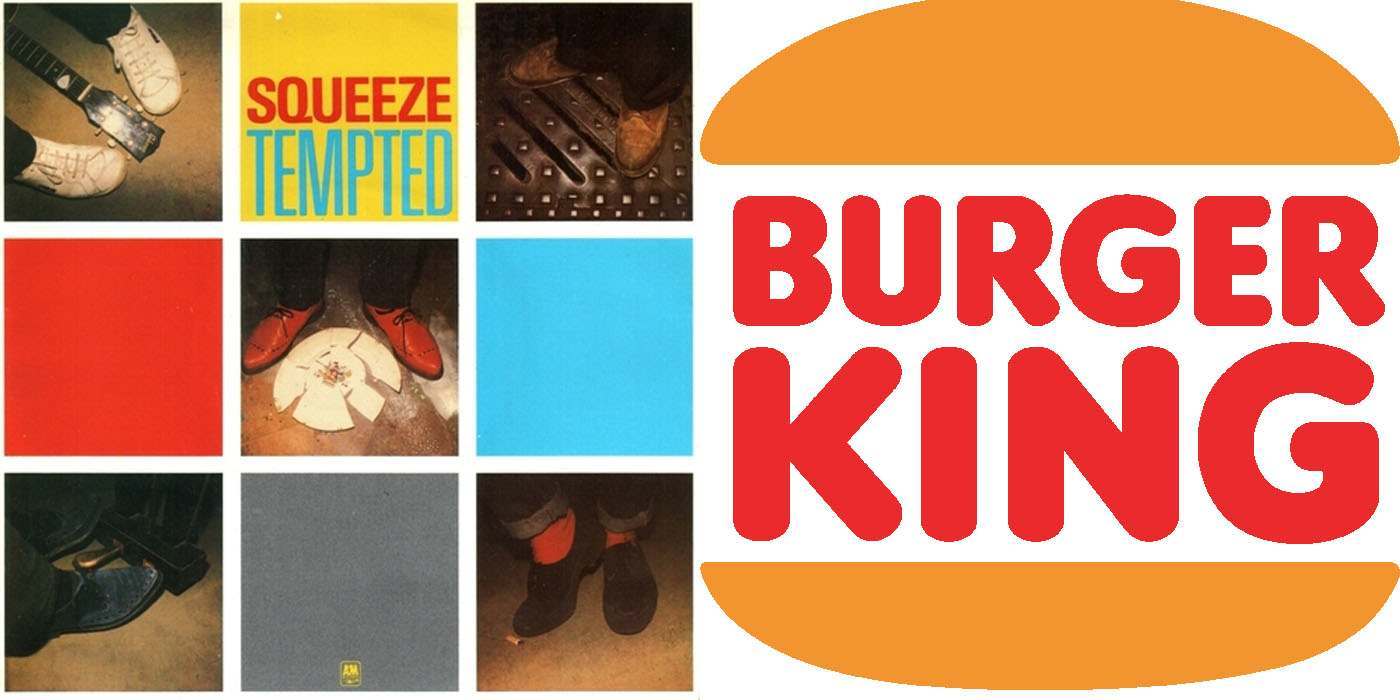 Who am I to condemn a musician if he or she wants to make some money off their work? They’ve got bills to pay just like anyone else, I suppose. That being said, sometimes the pairing of song to commercial that just seems intrinsically wrong. Tempted is a quality song about lust and infidelity – not about man’s temptation for greasy burgers. 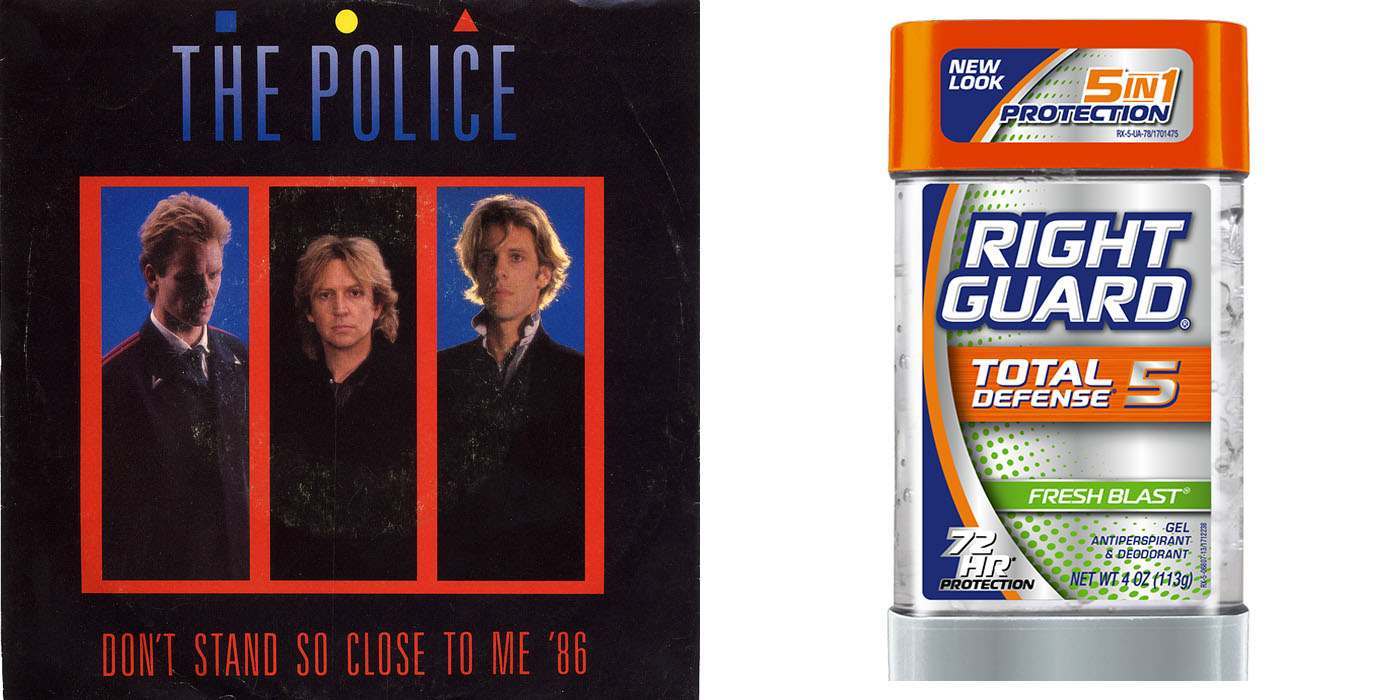 “Just like the old man in the book by Nabokov” sings Sting in this great song about an illicit teacher-student relationship. The fact that it’s meaning is now twisted to refer to the repugnance of body odor is more than a little bit sad. 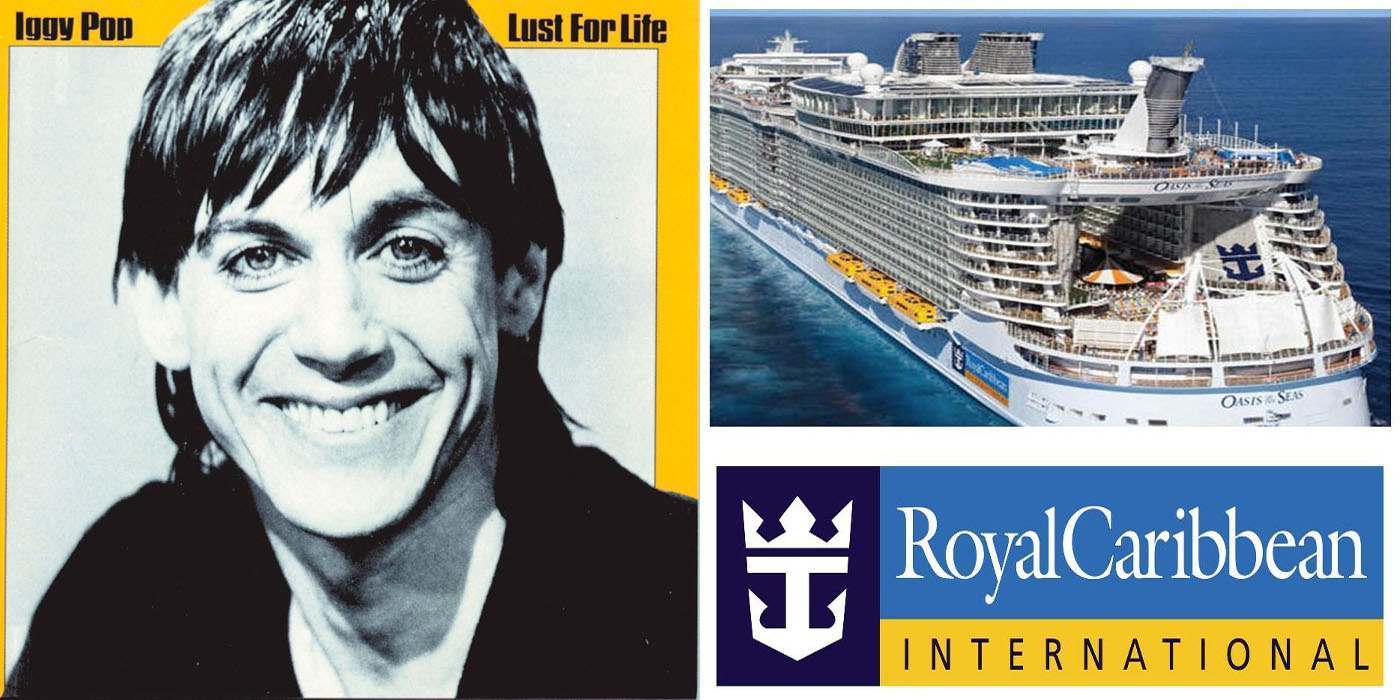 “Green Onions” by Booker T. and the MGs
Depends Undergarments 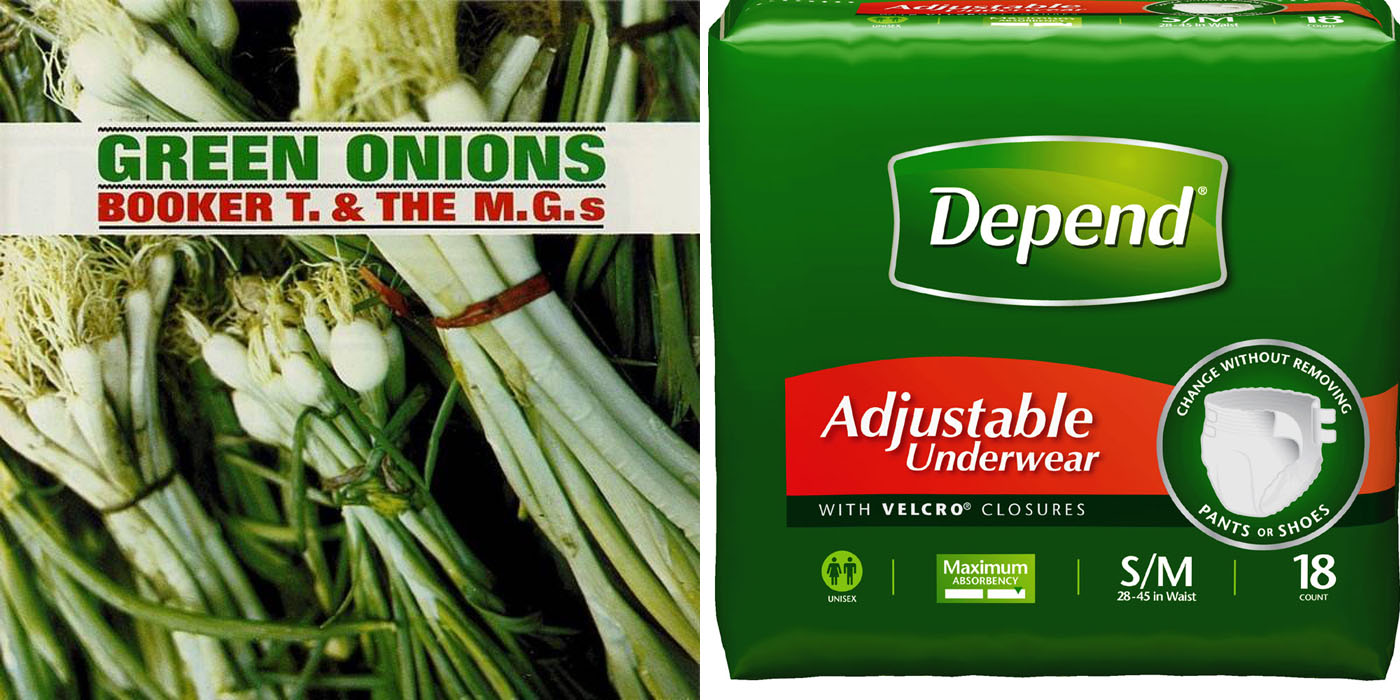 Let’s face it, any song used for an adult diaper commercial is going to suffer the loss of some “cool points”. It may as well be “Green Onions”, a funky instrumental which has been used a countless number of times on TV. 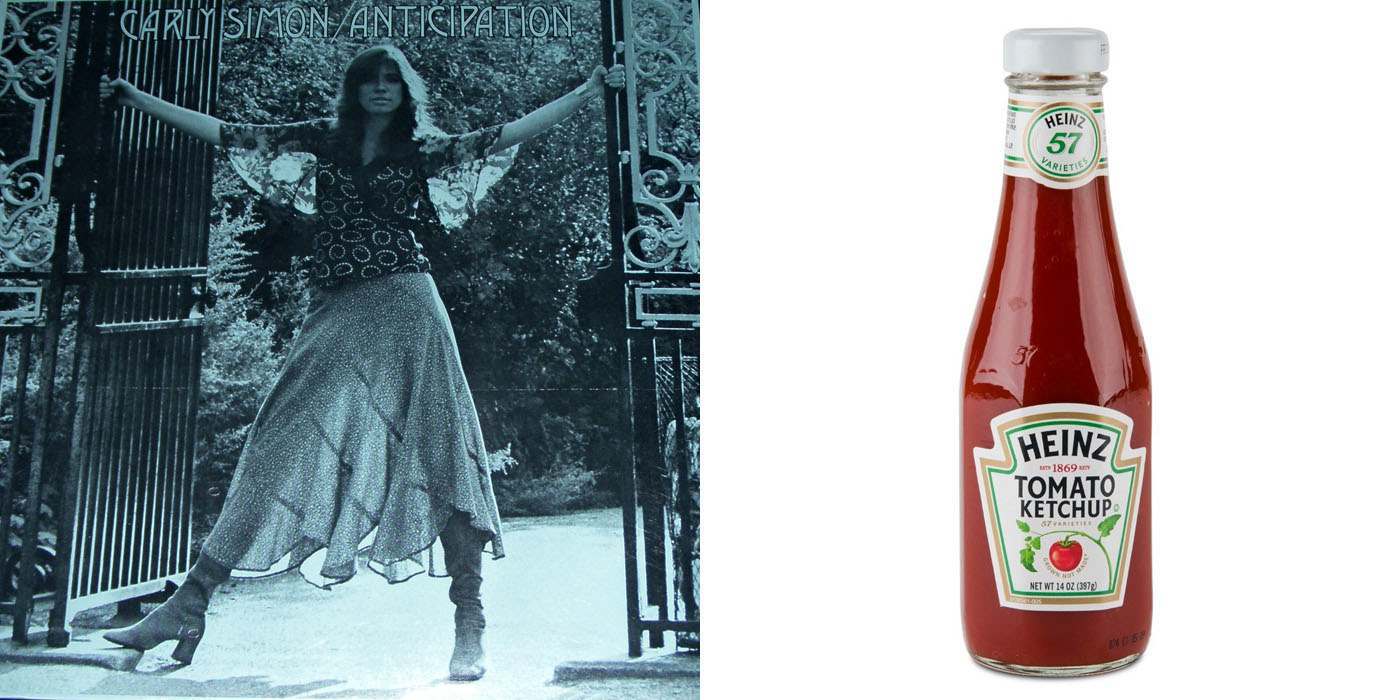 This one may be the mother of all 70s songs ruined by commercials. Simon wrote it while she was waiting for Cat Stevens to pick her up on their first date. Thanks to years of TV commercials in the 1970s, the song now is synonymous with waiting for ketchup to ooze out of a bottle.

Of course, it didn’t start with Carly. For example, Donovan was selling his musical wares back in in the late 60s: “Wear Your Love Like Heaven” song was used in a cosmetics commercial for a perfume called “Heaven Scent”.

“Taxman” by The Beatles
H&R Block 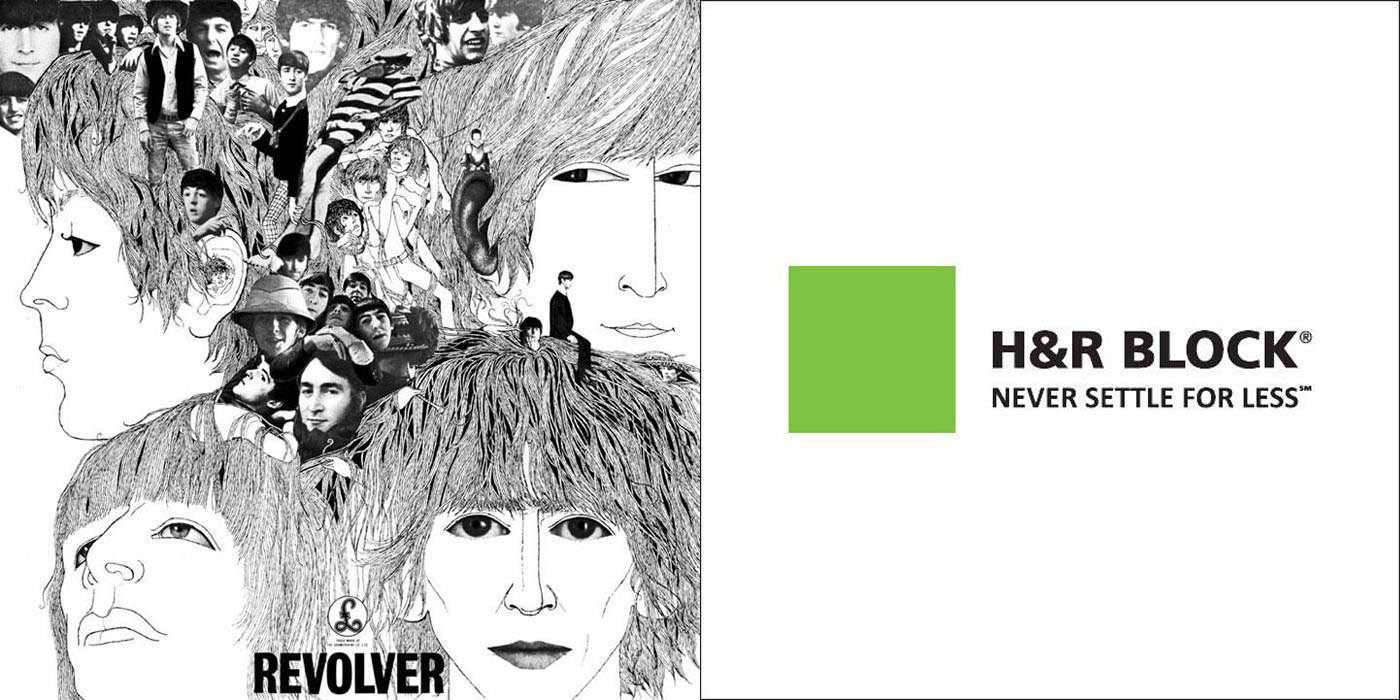 Yes, I know it’s just a silly little song inspired by the Batman TV theme and George’s bitterness towards being taxed to death. That being said, I still find it a tad unsettling that it’s now a theme song for a massive financial corporation.

A quote from the former arts editor of National Public Radio seems in order:

It seems as if every commercial these days has a rock band in it. What was once the mark of utter uncoolness, a veritable byword of selling out, has become the norm. More than a decade ago we became inured to the most unlikely parings. Led Zeppelin in a Cadillac ad. The Clash shilling for Jaguar. Bob Dylan warbling for an accounting firm, or Victoria’s Secret. An Iggy Pop song about a heroin-soaked demimonde accompanying scenes of blissful vacationers on a Caribbean cruise ship.

There is no longer even a debate, let alone a stigma. “If you did an advert, you were a sellout,” notes Billboard Executive Editor Tamara Conniff. “The Rolling Stones broke that when they allowed the use of ‘Start Me Up’ for the Windows campaign. Though there was an initial backlash, it suddenly made it okay for bands of integrity to do commercials. Now, it’s almost as if as an artist you don’t have a corporate partner [or] commercial, you’ve not really arrived.”

Indeed, in the late 1990s, the techno artist Moby, as hip as they come, openly boasted of having sold every track of his breakthrough album “Play” to an advertiser, or to a film or TV soundtrack. The album should perhaps have been called “Pay.”

So we submit: The battle has been lost. But that doesn’t make it right.

– “How to Calculate Musical Sellouts: As Rockers Cash In, The Moby Quotient Helps to Determine The Shilling Effect” by Bill Wyman, The Washington Post, October 14, 2007 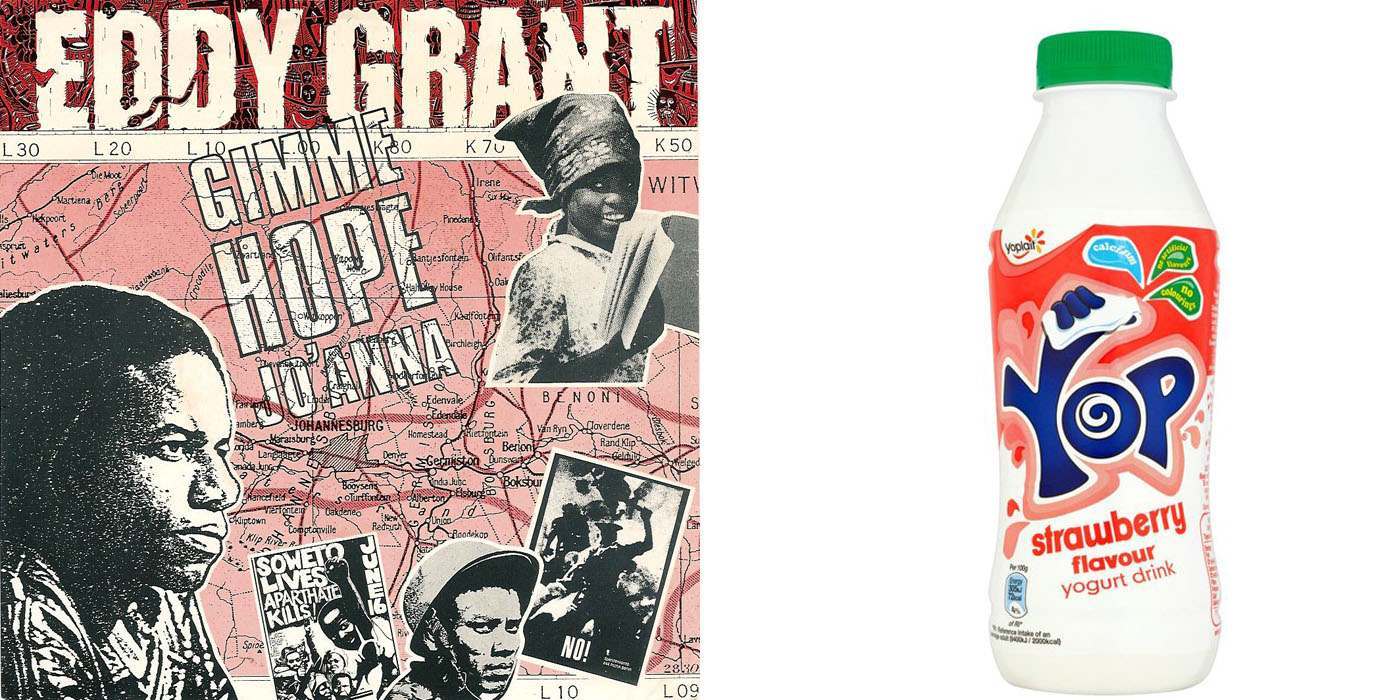 A powerful uplifting song about Johannesburg, South Africa written years before Mandela’s release (and banned in the country). Incredibly, it was turned into a jingle for a yogurt drink – with the lyrics changed to “Give me Yop (me mama)”. 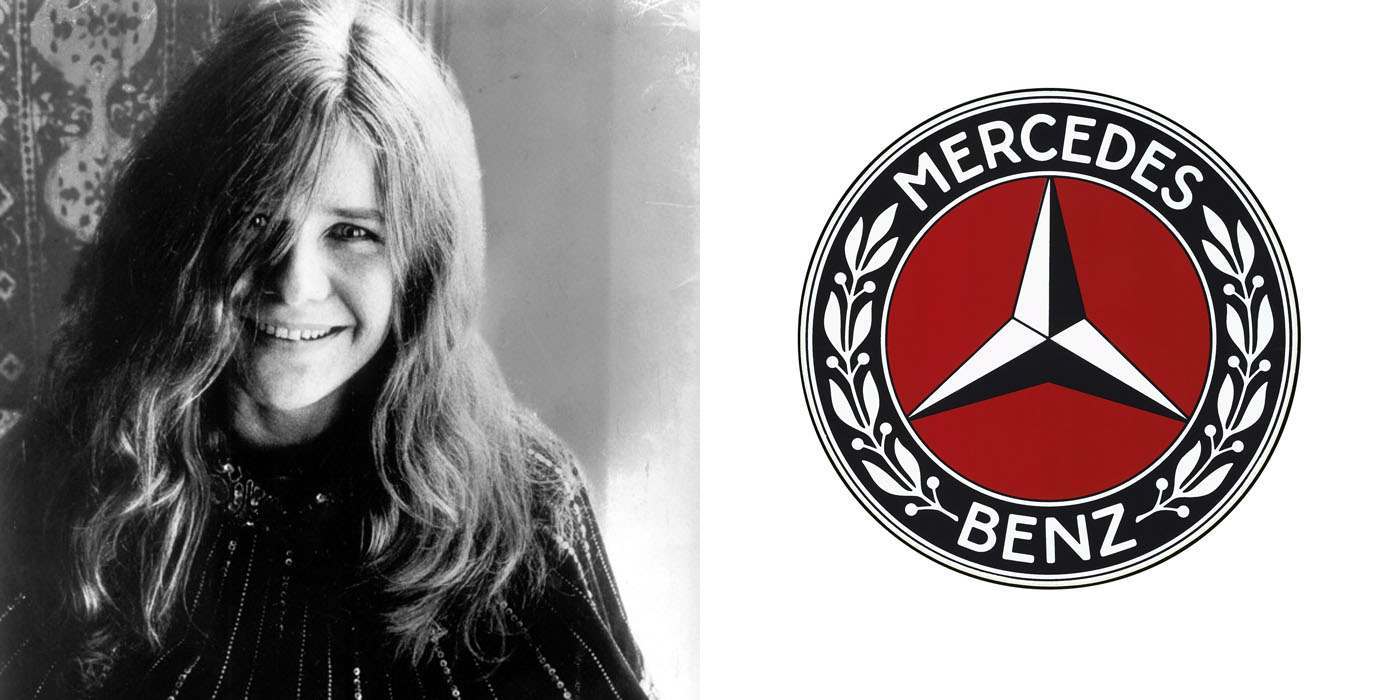 It was bound to happen, right? The song was recorded just a few days before her death, inspired by a ride in Bobby Womack’s new Benz. Fast forward a few decades and it’s in a slick Mercedes commercial. It was all so inevitable.

“For What It’s Worth” by Buffalo Springfield
Miller beer

It’s always a little disheartening when antiestablishment songs get stuck in TV commercials, but this doesn’t even make sense. “There’s a man with a gun over there, telling you you’ve got to beware”…. How is this in a beer commercial? I can wrap my head around “Born to be Wild” in a Diet Pepsi commercial, but this is too much.

Okay, this one (as far as I know) was never actually used – but it almost was. Preparation H was given the “okay” by Merle Kilgore who wrote the song, but the Cash family hold veto power and wouldn’t let it happen. Which, on the hole, I think is a good thing.

I wonder what Steve Goodman, the song’s writer, would think about his song being used to market stool softeners. “Good morning America, how are ya ?” It’s so awful, the commercial itself is enough to get the bowels to turning.

And finally, we’ll end with a philosophical question: