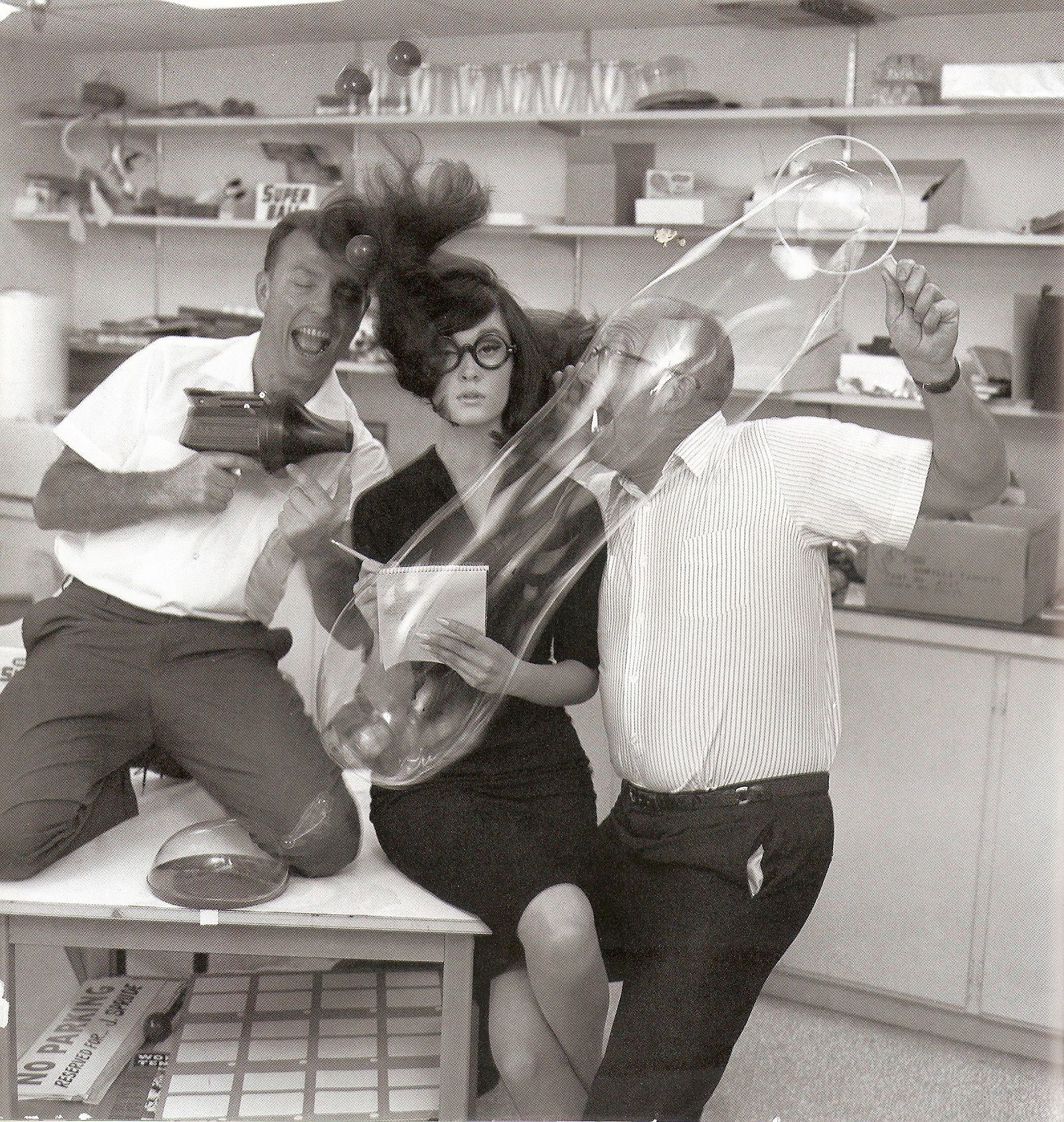 Richard P. Knerr and Arthur K. “Spud” Melin were just a couple dudes in Southern California selling used cars in the 1940s. Who would have guessed they’d create a toy company that would be such an integral part of American childhood for decades to come.

It all started with the toy below… 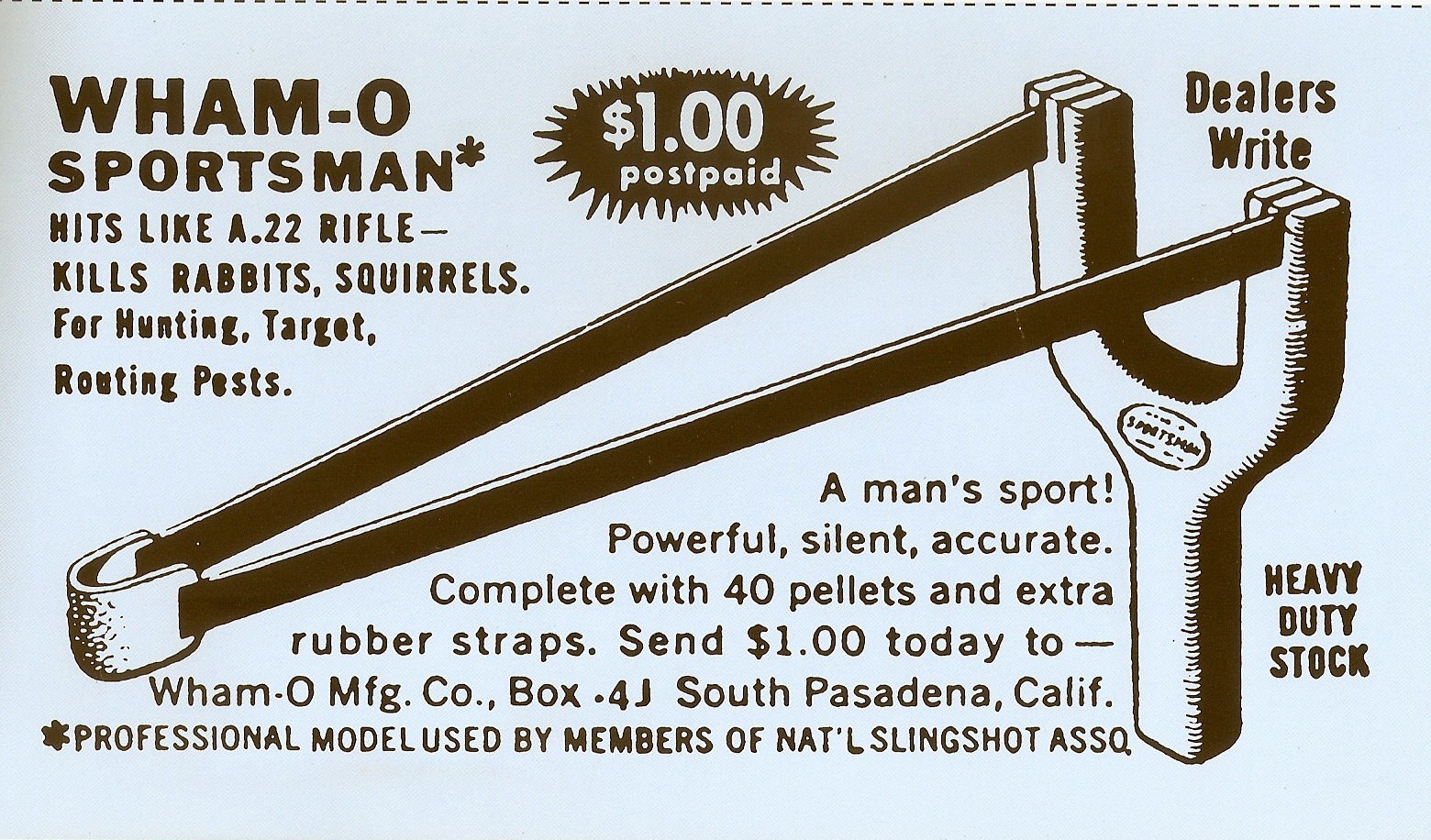 Richard and Spud were into falconry, and they made their own slingshots to propel meat into the air for the falcons to snatch.  When an acquaintance asked if he could buy one the devices, the two friends embarked on a mission that would span decades and define the childhood of millions of Boomers and Gen Xers.   Rich and Spud went to Sears & Roebuck, bought some equipment and commenced making slingshots.

The adverts were placed in men’s magazines like Field & Stream, Popular Mechanics and Popular Science.  It would still be a while before they conquered the kids’ market. 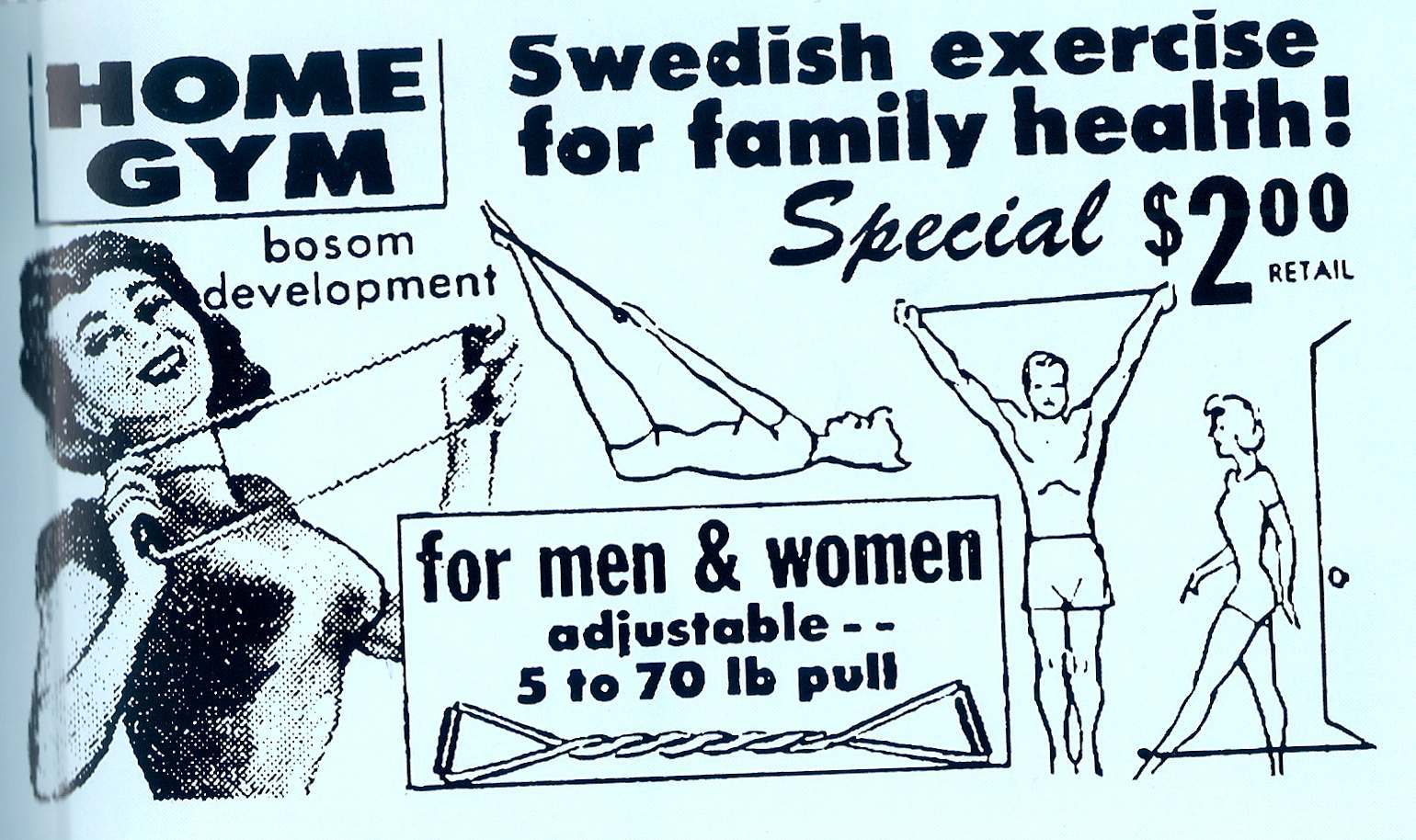 In the beginning, they pretty much “winged it”.  Rich and Spud would literally place the advertisement before making the devices.  Like the one above, the ad came first… if people responded and sent money, then they’d figure out how to make it.  This was mail-order advertising at its finest – you obviously can’t get away with this sort of thing when your product is on store shelves.

Then came the weaponry… 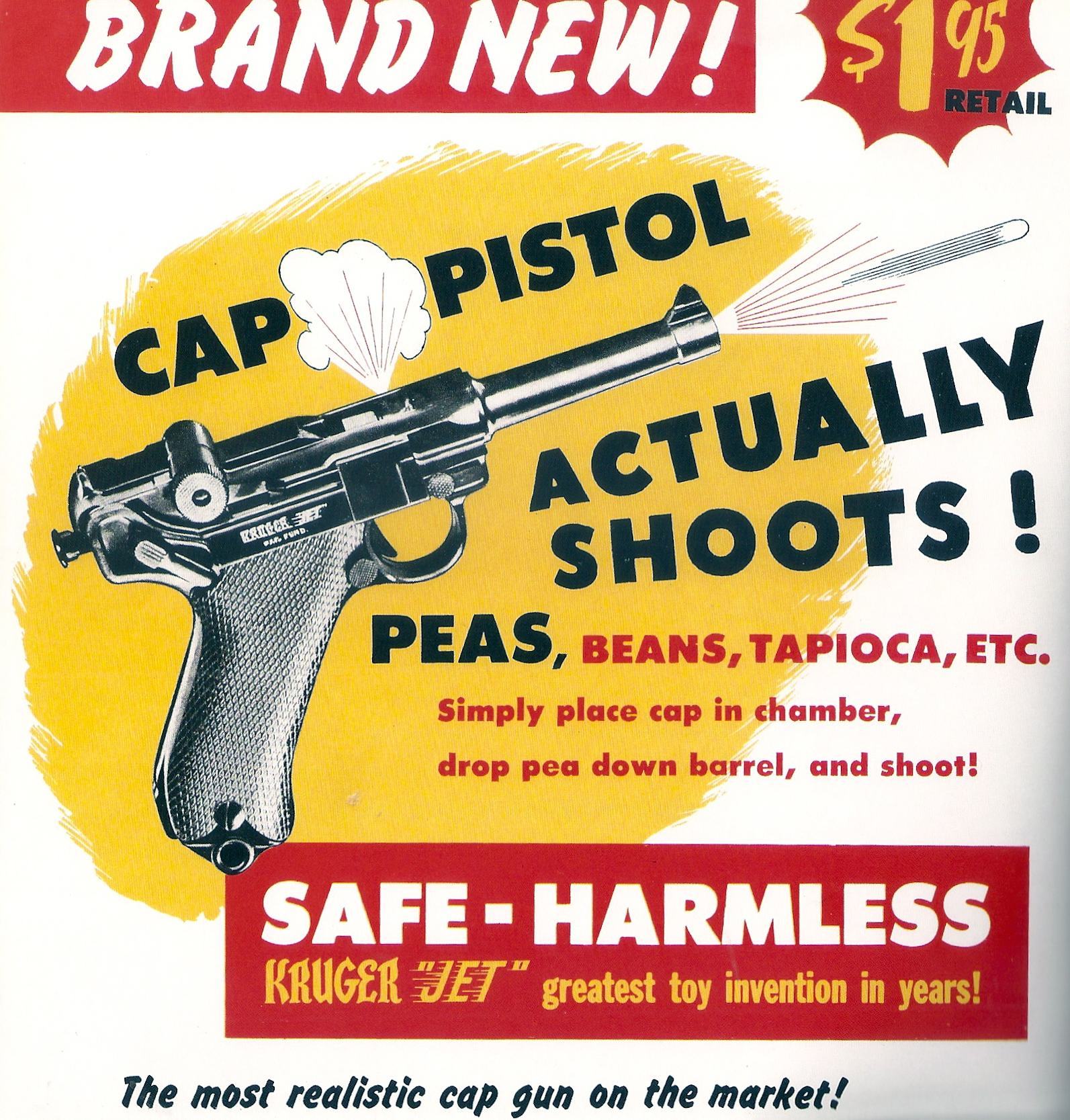 Rich and Spud would eventually build a small “factory” in San Gabriel and hire a few sales reps to travel to Sears and Woolworth’s to get their stuff on shelves.  It wouldn’t be until the Hula-Hoop and Frisbee that genuine mass production took place.  For now, it was primarily mail-order with minimal demand. 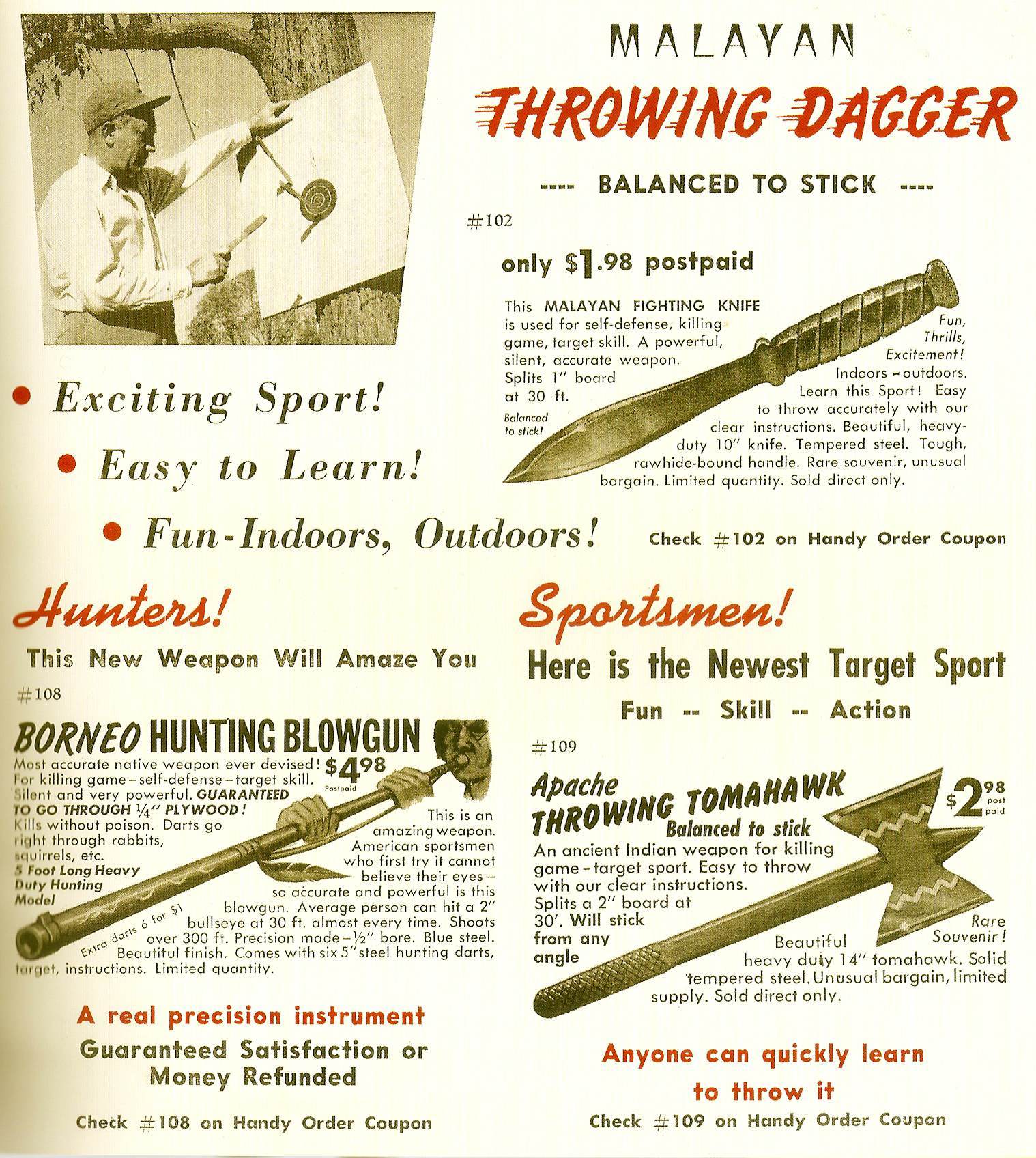 Rich and Spud were sportsmen themselves, so it seemed only natural to get into the mail-order deadly weapons business.  It’s 1950 – what red blooded American male didn’t want an Apache Tomahawk?  Just “Check #108 on the Handy Order Coupon” and this precision blowgun can be yours! 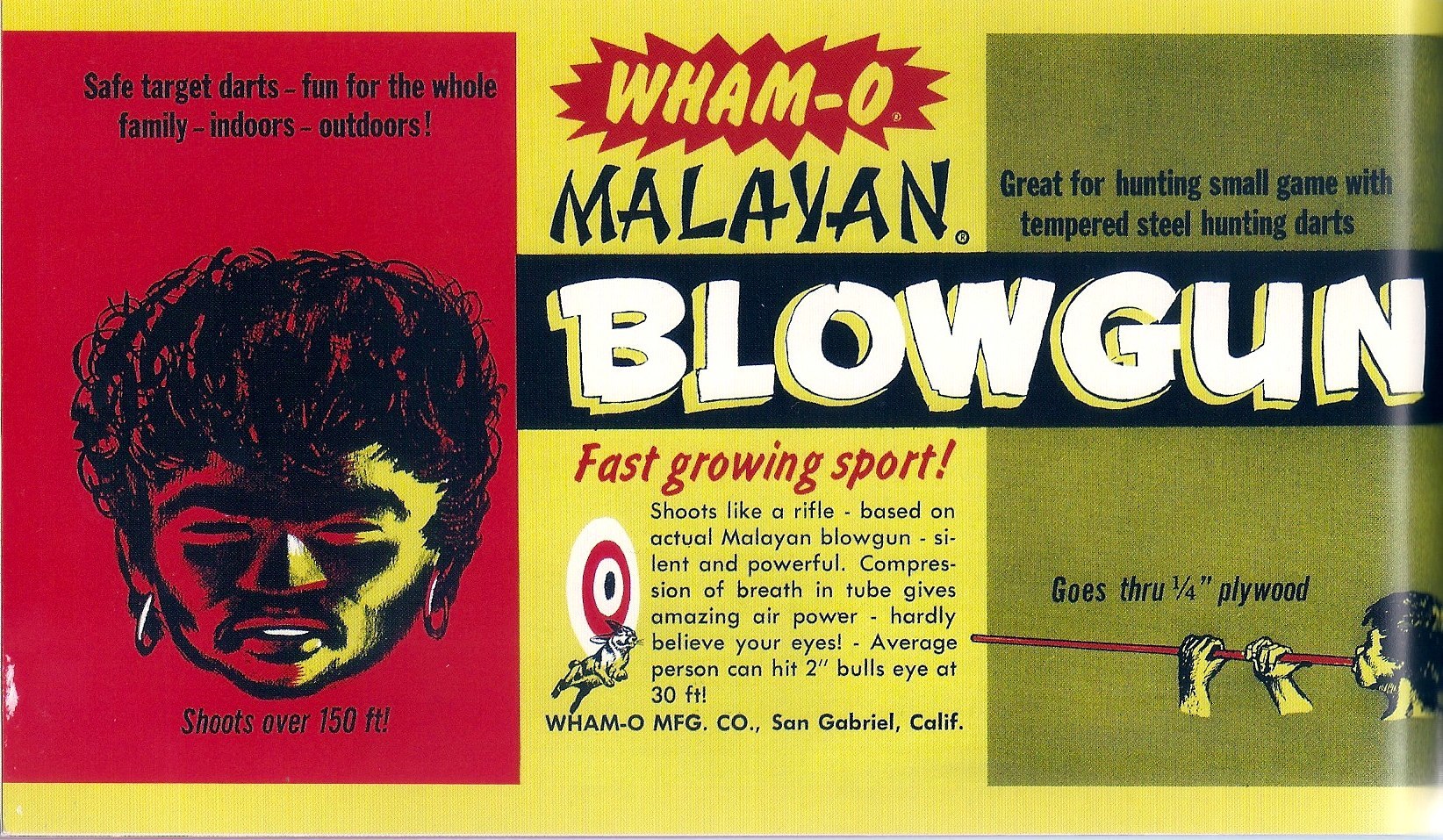 Yes, blowguns are the perfect indoor sport.  What better way to pass a rainy day than with a Malayan blowgun? 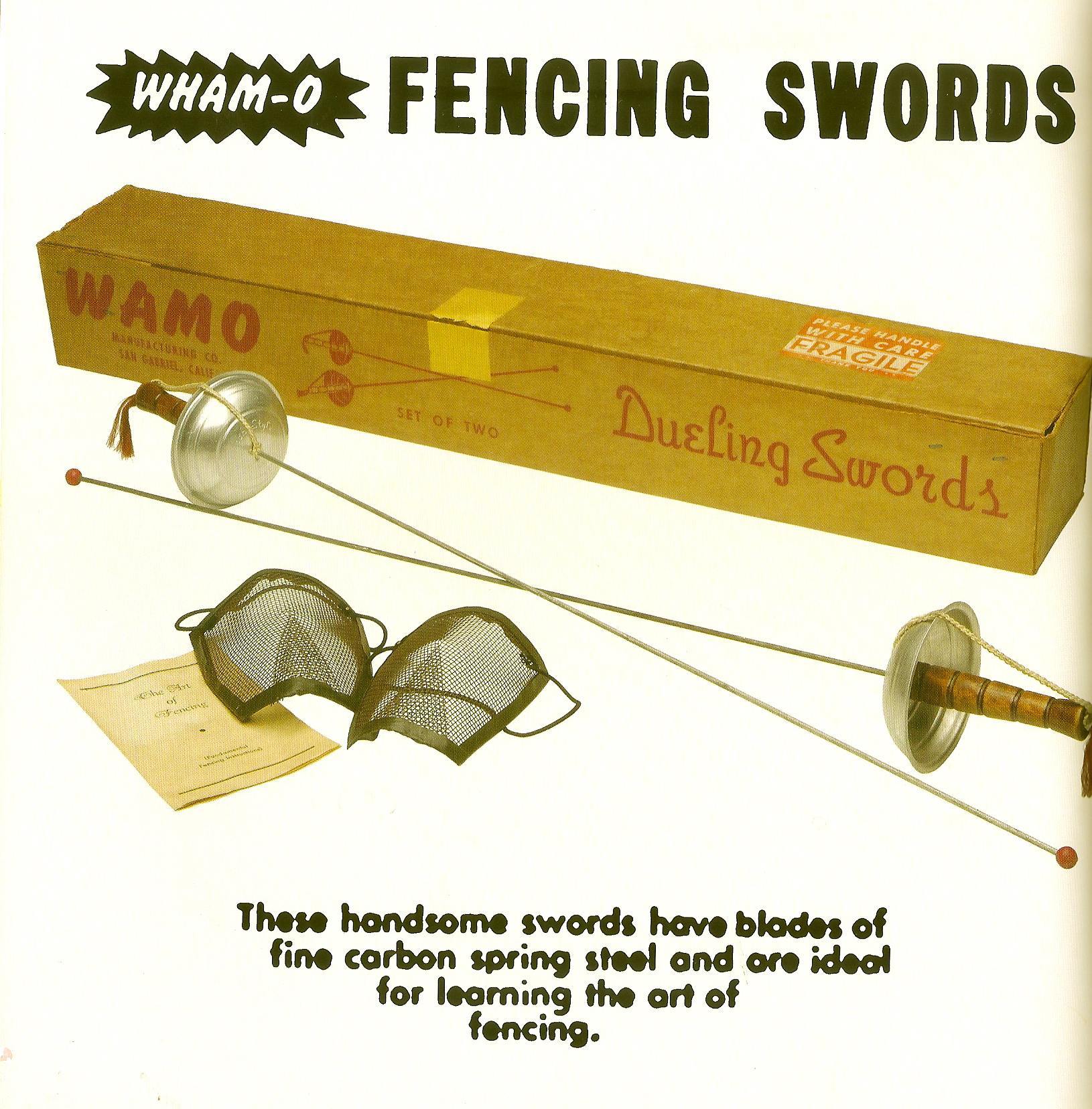 It was a different time.  Toys which could easily be used to murder someone would soon be out of vogue.  Rich and Spud branched out…. 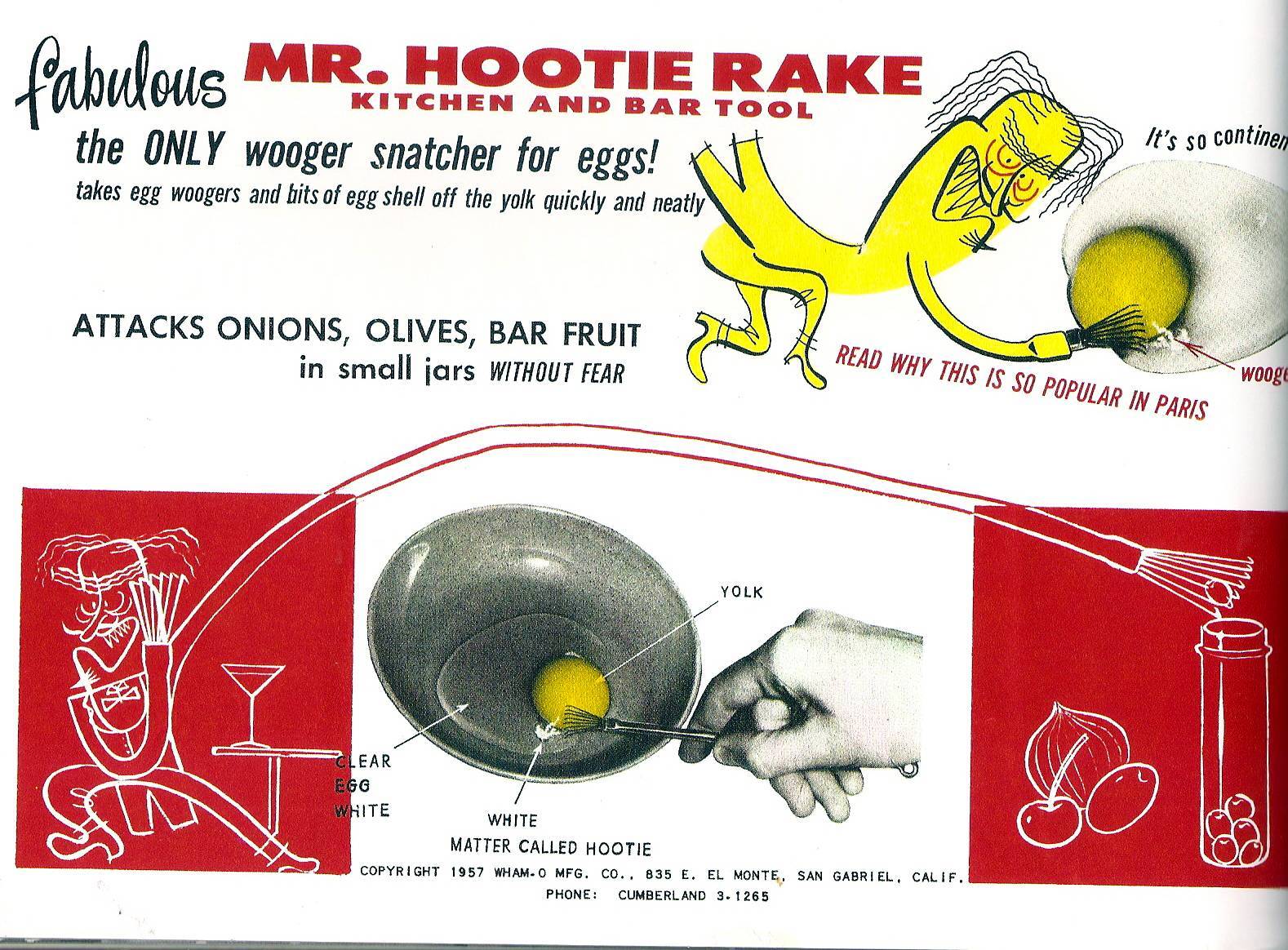 Yes, this is truly insane, but this creative abandon is what you get when you design your ads before investing a penny in manufacturing.  In other words, you have nothing to lose except the money for ad space.  Invent the “Mr. Hootie Rake” and if there’s demand, outsource the production…. if there’s no interest, no problem – you haven’t wasted money on buying the supplies and equipment yet.  This “what the hell” attitude is what gave Wham-O its character and seemingly limitless variety in their product line. 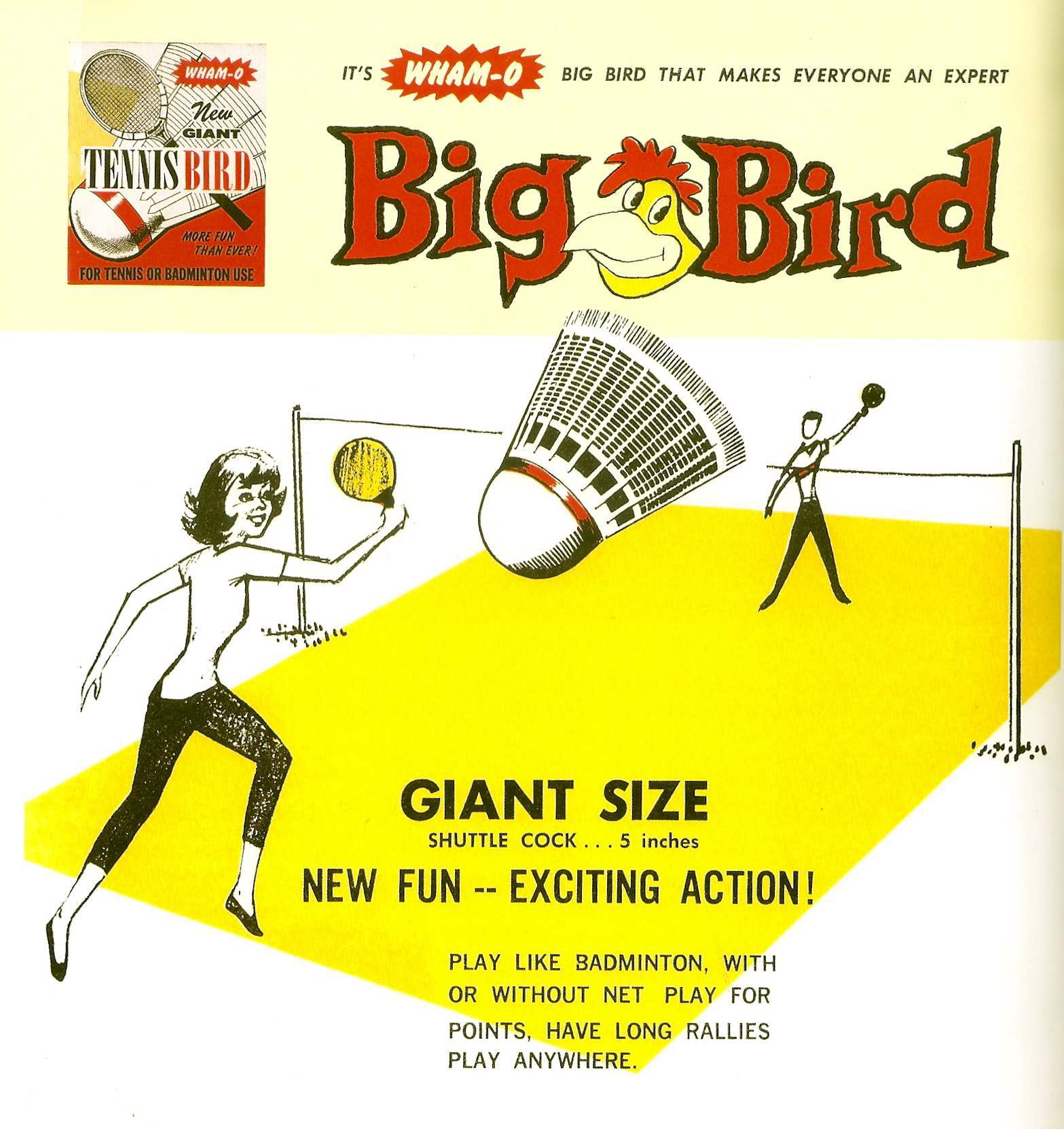 It’s just like Badminton, but with a big-ass birdee.  Wham-O was all about making things bigger: “Giant Monster Bubbles”, “Super Balloon”, “New Gian Tiddly Winks” to name a few products which fully embraced the “bigger is better” philosophy.

But the BIG break came with the Hula-Hoop…. 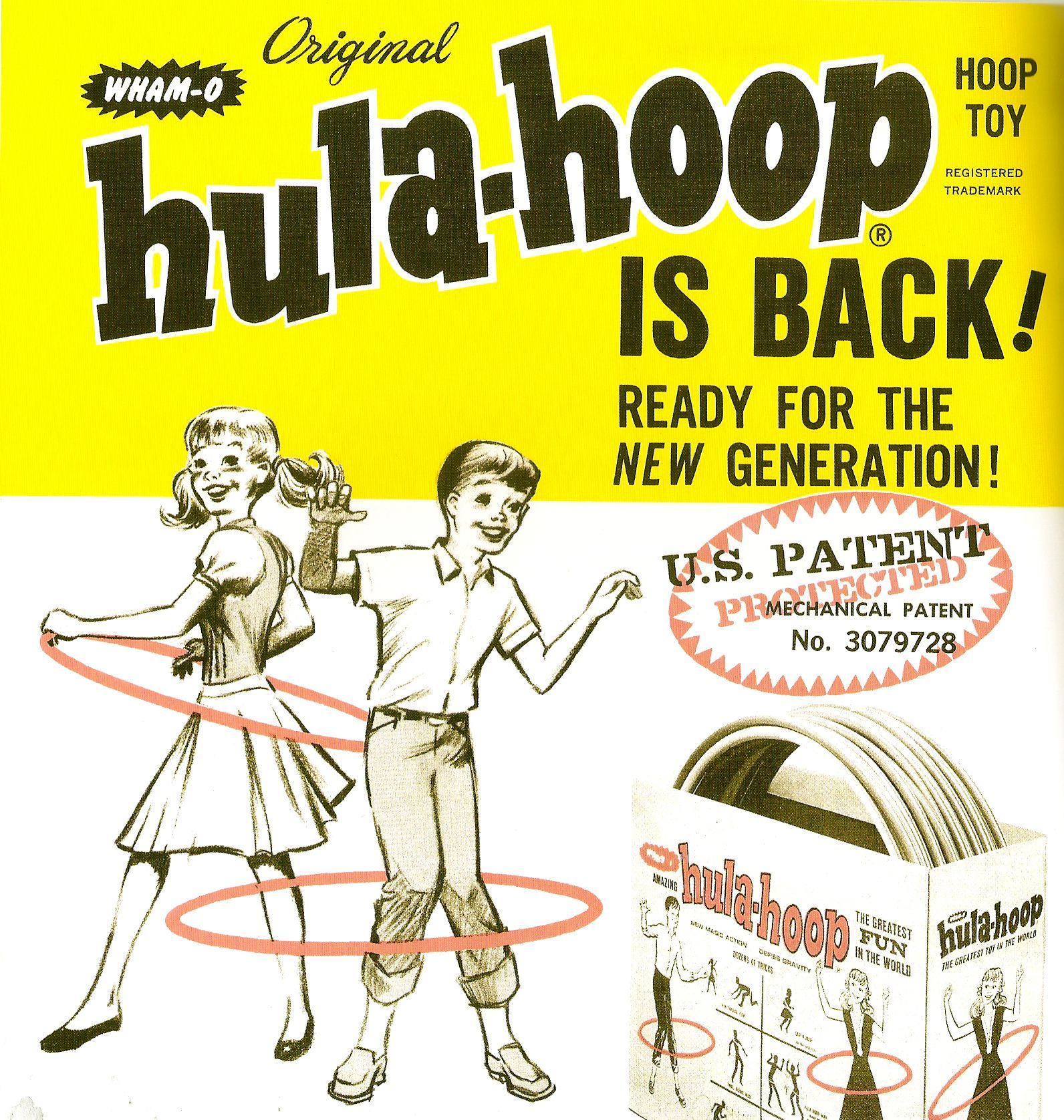 Kids had been playing with hoops since the as far back as childhood itself – indeed, Dionysus’ favorite toy was a brass hoop.  Wood hoops and stick were the rage among Victorian tots.  Who would’ve imagined the hoop would become a mega-craze in the 1950s?

The plastic hoop fad actually started in Australia where 400,000 were sold in 1957.  The Australian company went to Rich and Spud to sell the idea in the States.  The duo took their newly dubbed “Hula Hoop” on the Dinah Shore Show and a fad was born.  In 1958, over 50 million hoops were sold in the US.

Oddly enough, Rich and Spud couldn’t patent the Hula-Hoop.  Claiming rights to something like a plastic hoop was just too generic; thus, many imitators jumped on the gravy train.  Wham-O collected proceeds from only about 25 percent of all the plastic hoops sold that year.

But an even bigger success was right around the corner… 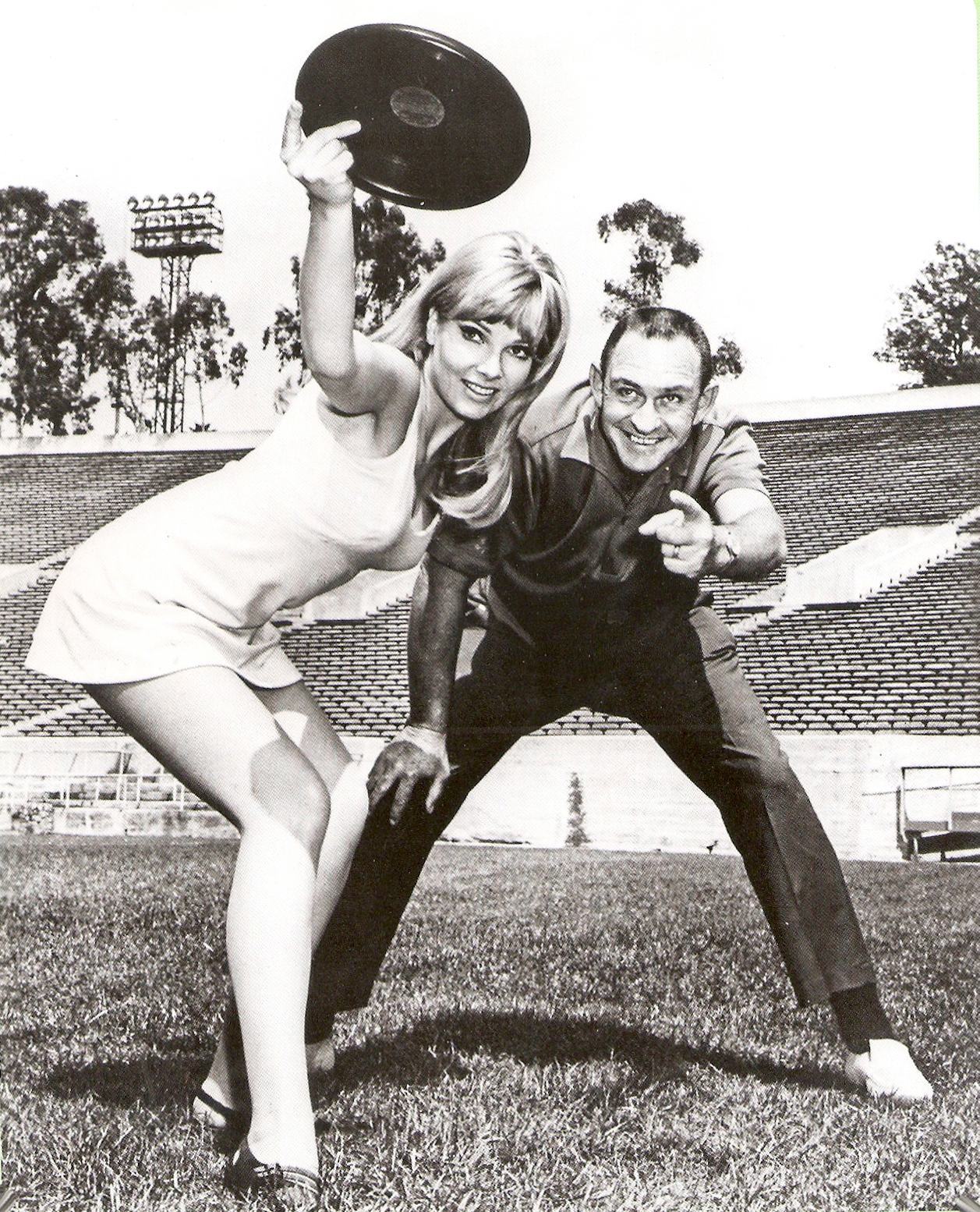 At the exact same time that Rich and Spud were making their own slingshots, just a few miles away, a man named Fred Morrison was developing what would be called the Frisbee.  It started by just throwing popcorn lids then pie tins… son Fred was trying to sell his “Flying Saucers” and “Pluto Platters” to local Woolworth’s and other retailers with little to no success.

Then Fred brought it to Rich and Spud, who offered him royalties and made brought it into the fold of Wham-O.  It wasn’t an instant success, and wasn’t even called “Frisbee” until a few years later (the name originated on the East Coast via the Frisbee Pie Company, where folks had been tossing their pie lids for years).  By the early 1960s, it was a certifiable goldmine, ultimately selling over 200,000,000! 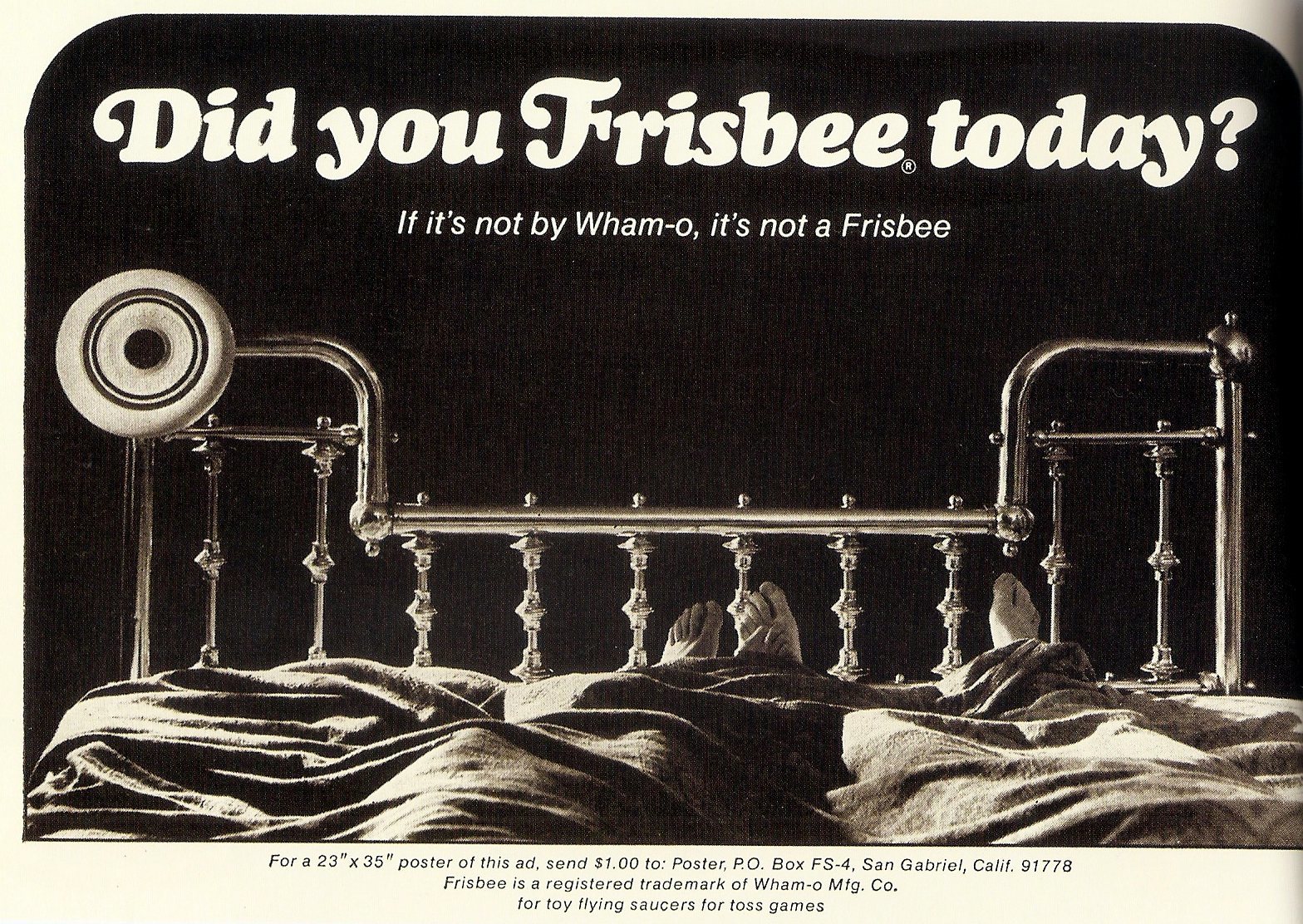 The advert above ran in Playboy magazine in 1973.  The beauty of Wham-O is that they never just let themselves be cornered into a niche.  They could have stayed a kiddie toy gun company, or ‘the company that made the Hula-Hoop”; instead, they were all over the place.  From toys for preschoolers to Frisbees for sexed-up Boomers (above), Wham-O was all over the place.

In 1975, Wham-O released the Trac-Ball.  Like the Frisbee and the Hacky-Sack (another Wham-O offering), it was an outdoor activity that is ultra-cheap.   As a child of the 70s, I remember pretty much everyone having a Trac-Ball set. 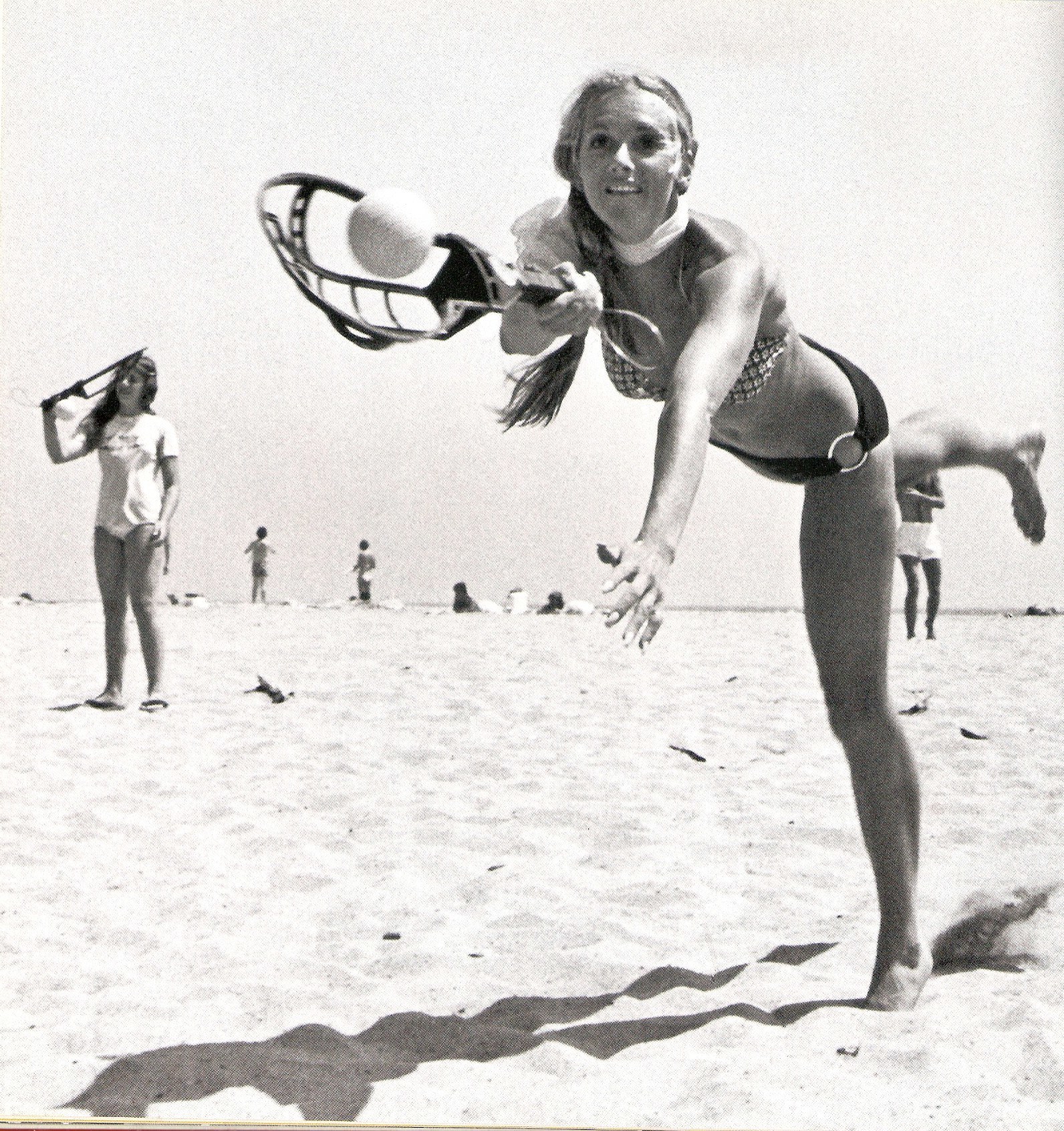 As I mentioned, the great thing about Wham-O was the diversity of its products.  It didn’t just sell toys, it was all over the map… 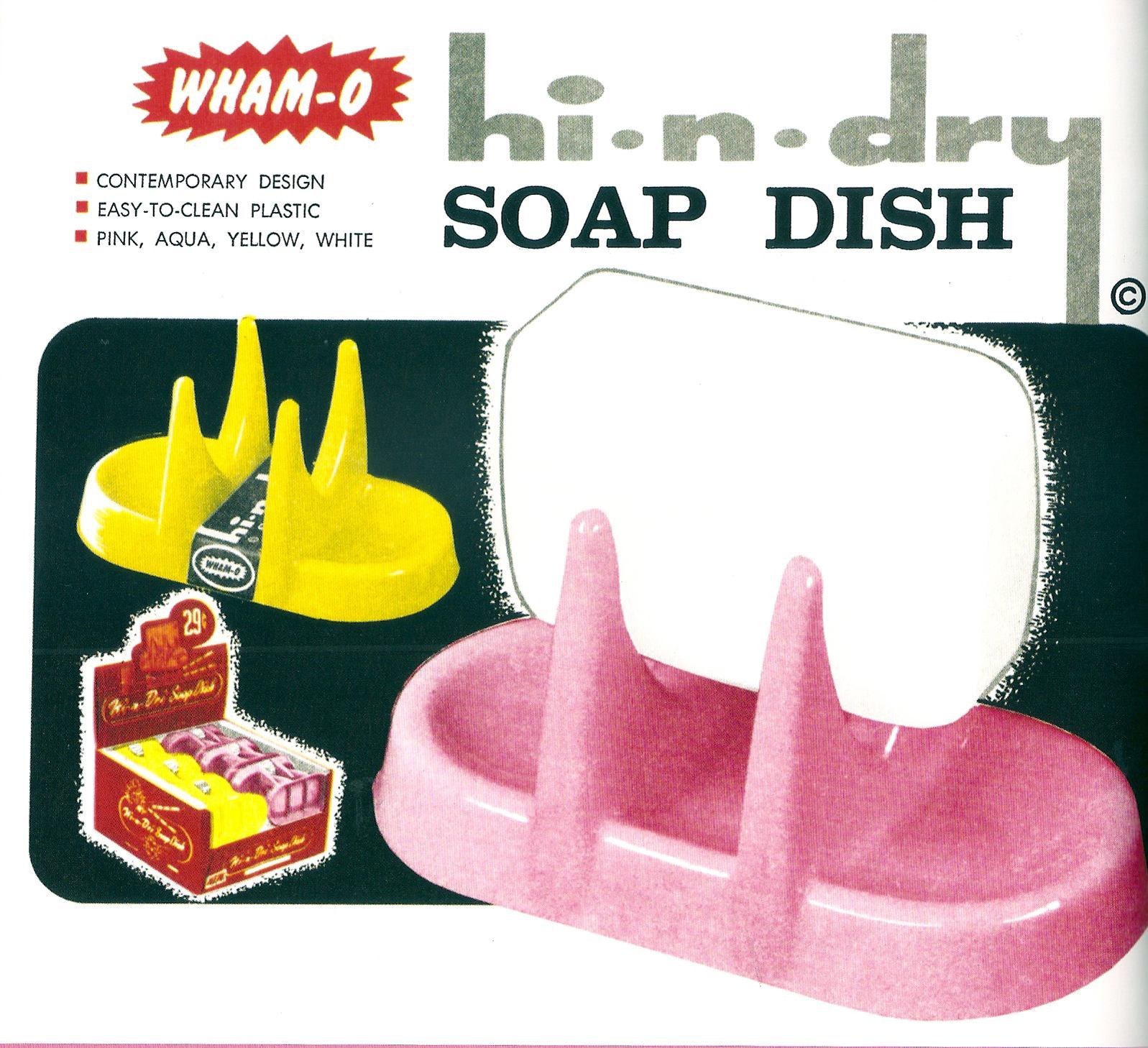 Seems like a good idea that was just waiting to explode like the Hula-Hoop, but alas, it was not meant to be.  Nor was the SUNVU… 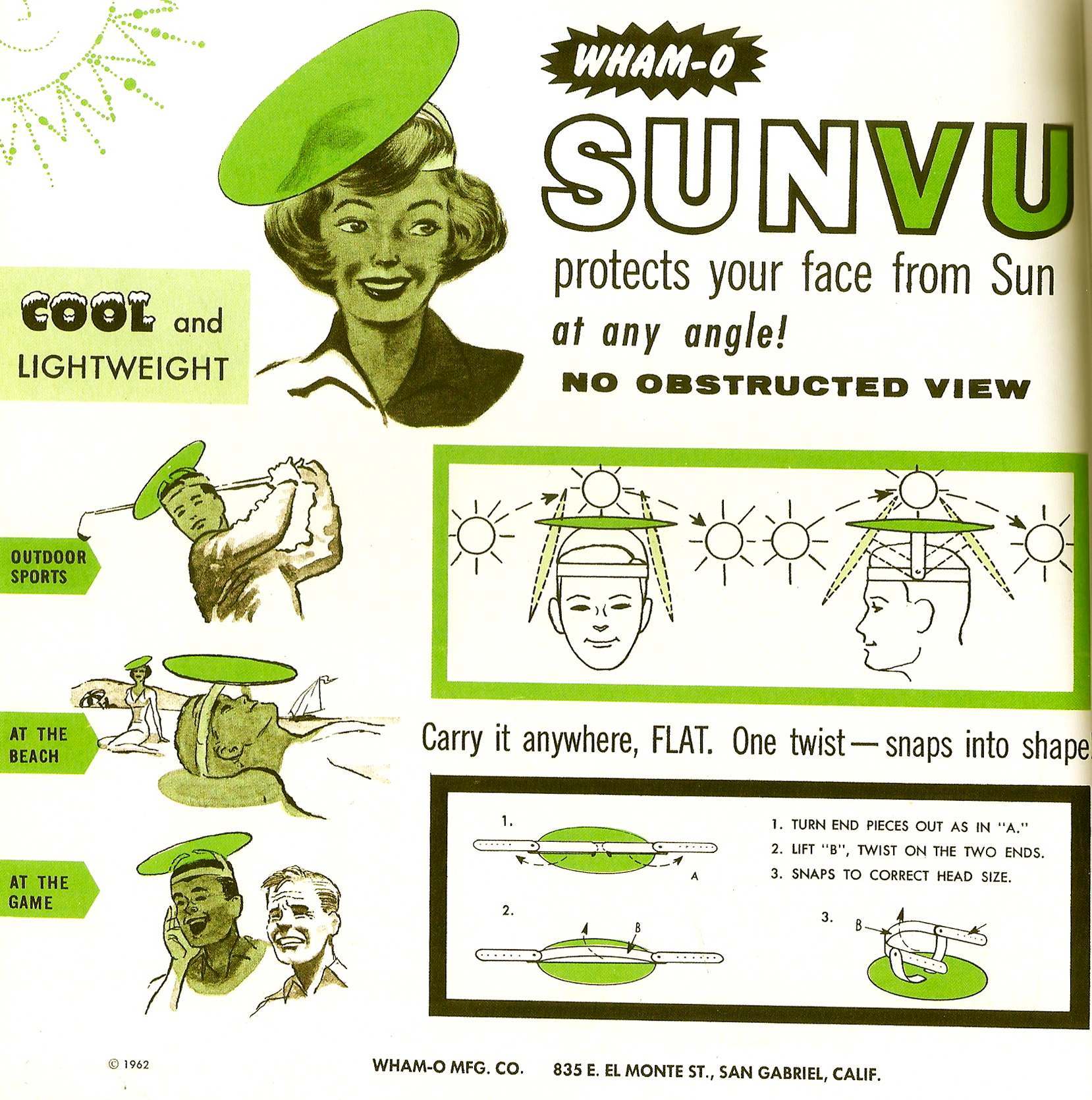 This 1962 offering maybe pushed the limits a bit.  It’s hard to imagine a world where people routinely strap translucent green discs to their head…but then, who would have thought 50 million people would be gyrating their hips inside a plastic ring? 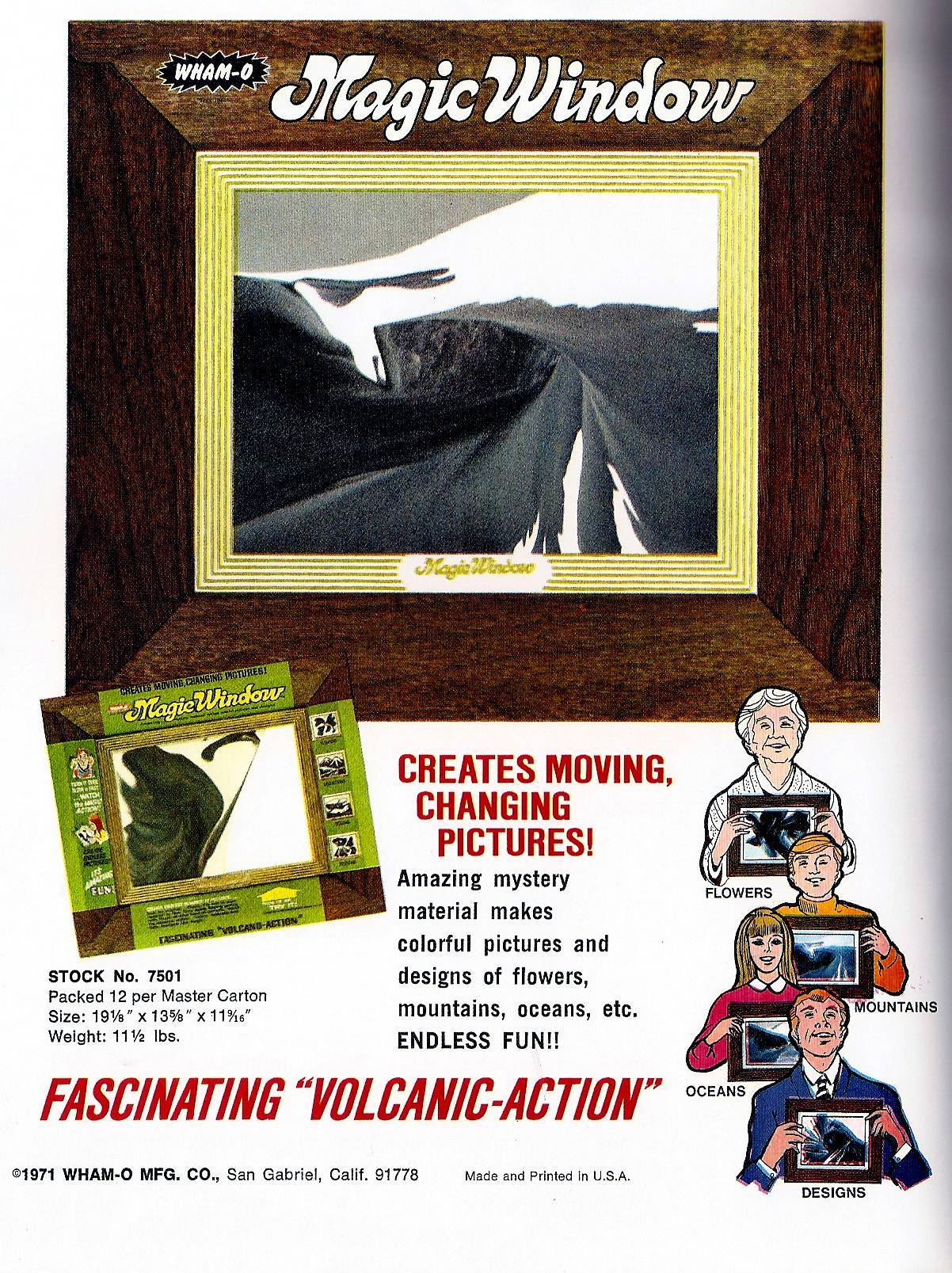 Dear God, I remember these Magic Windows so well – they were everywhere in the 1970s.  Despite their little logo, I don’t think I knew they were a Wham-O offering. Silly String is another Wham-O gift bestowed upon mankind that I don’t remember being from them… 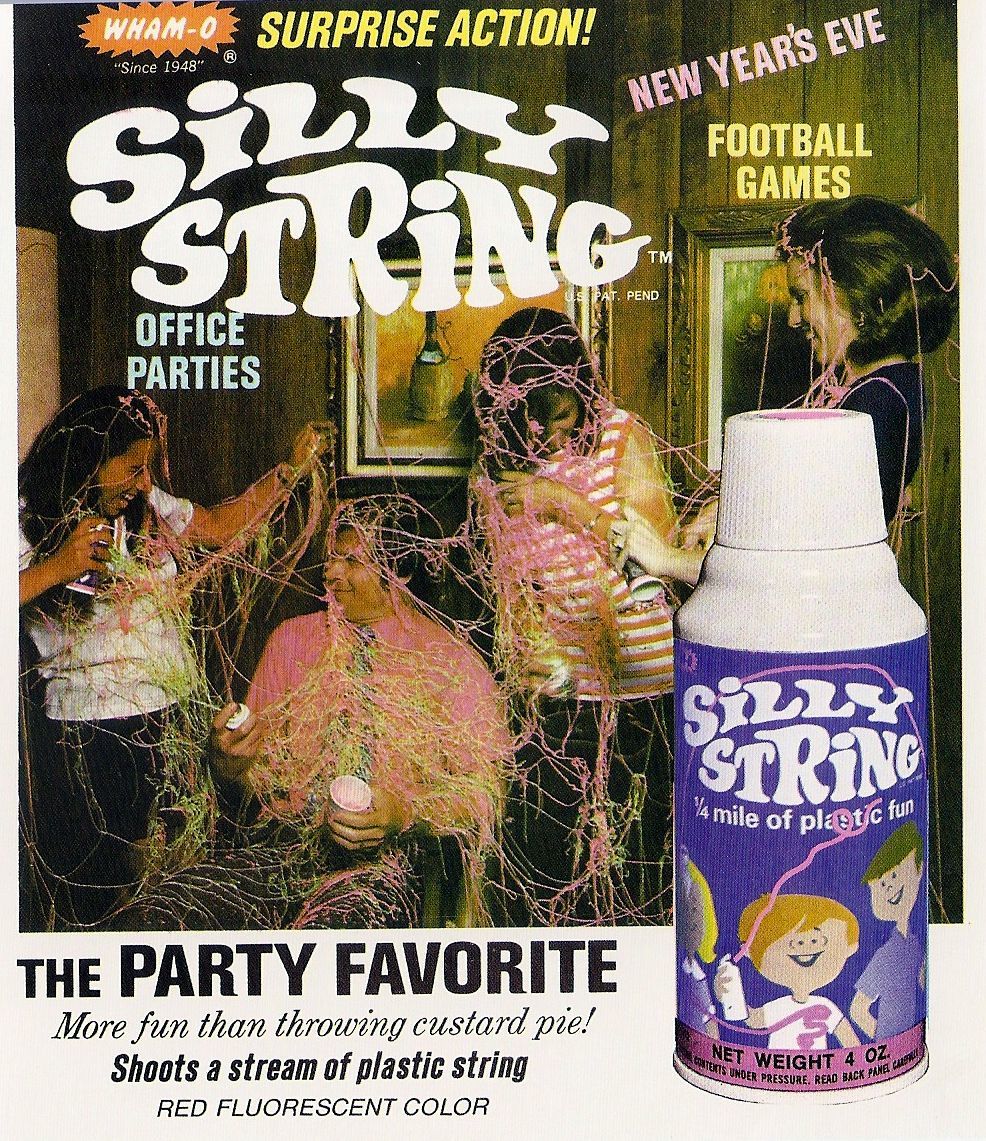 Man, when these kids play with Silly String, they play for keeps.  This looks less like “plastic fun” than a death trap for the young man in the chair.

And along the same lines, the String-A-Tree – the Wham-O way to flock your tree. 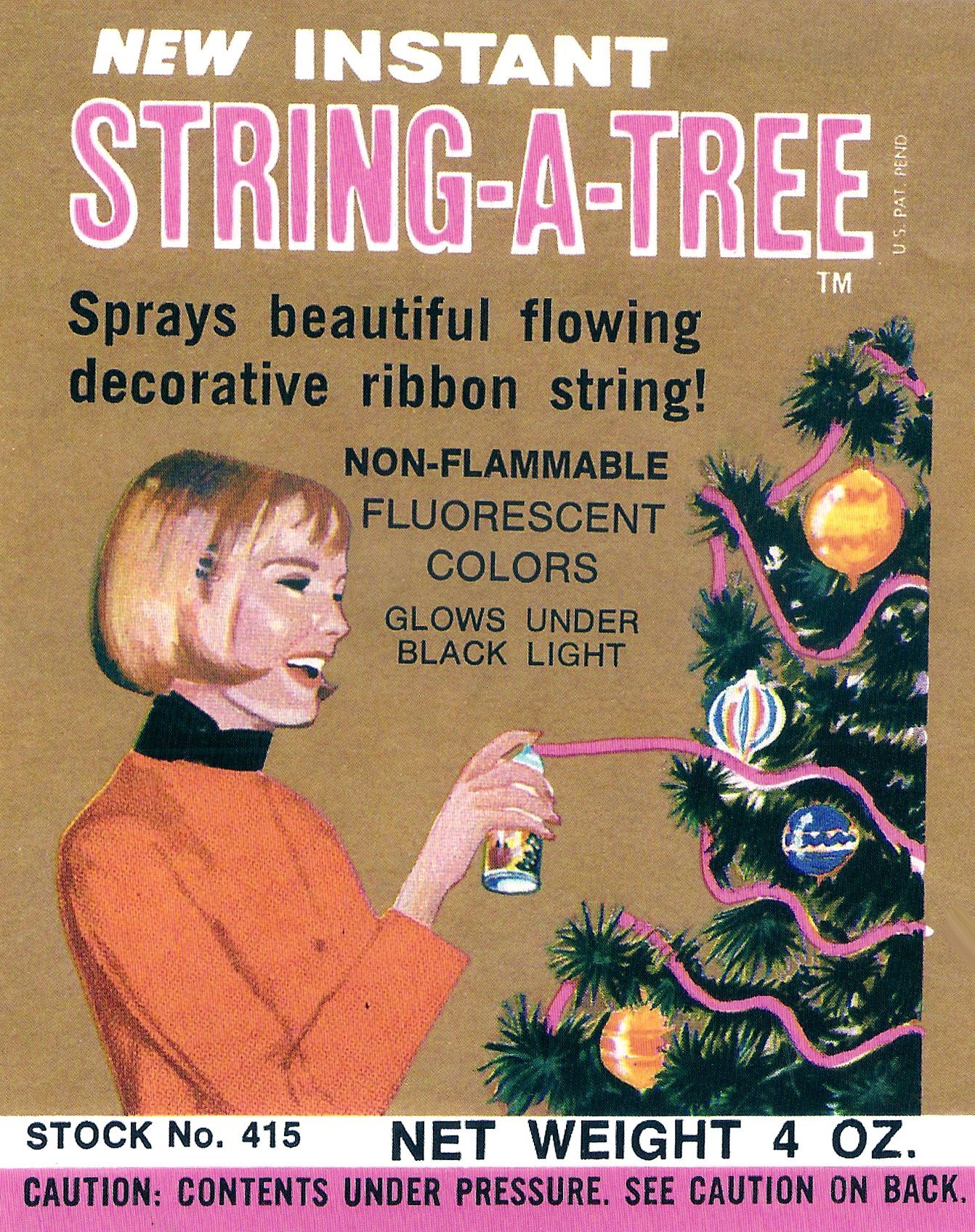 Silly String came out in 1969, and its foam resin wasn’t that far off from another foam product from that same year…. which very nearly could have been one of the most popular toys of all time… 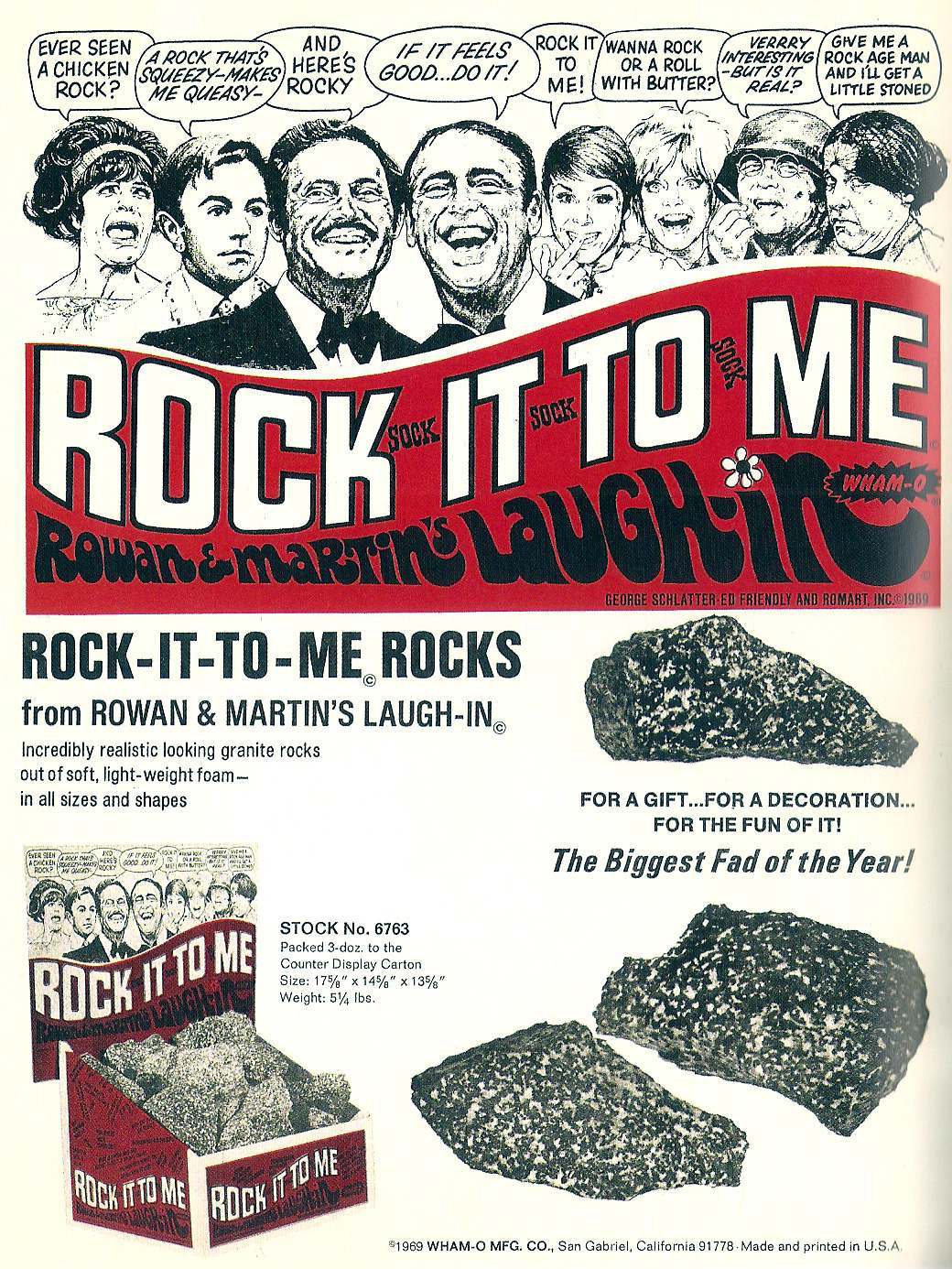 Rich and Spud were so damn close to beating Nerf to the punch.  If they had gone with releasing their foam as balls instead of ridiculous Laugh-In rocks, things may have turned out differently.  Instead, a similar foam was invented by Reyn Guyer who pitched his product to Parker Brothers, and the rest is Nerf history. 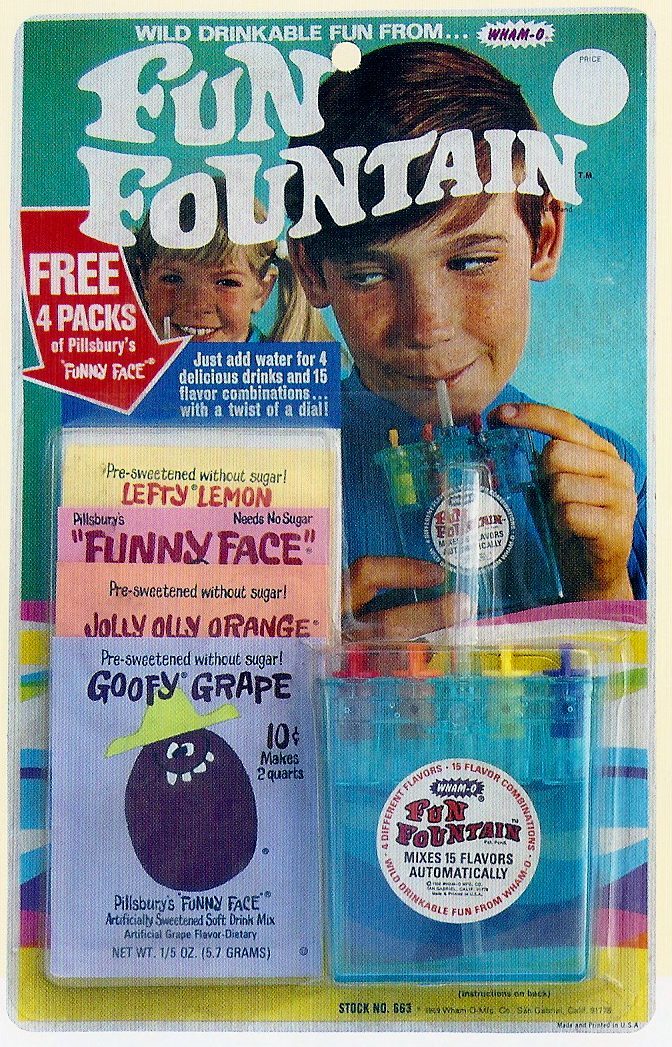 Silly String, Trac Ball, Frisbee, Hula-Hoops, Slip’n’Slide… it’s hard to imagine all this stuff came from the same company, and ultimately from the same two guys.  But not all their stuff was mega-popular.  For every massive success, there were twenty mediocre sellers and fifty genuine duds.  But that was okay, because you don’t get to those mega-successes without trial and error.

Before we go, let’s have a last look at a few less known, less successful Wham-O products. 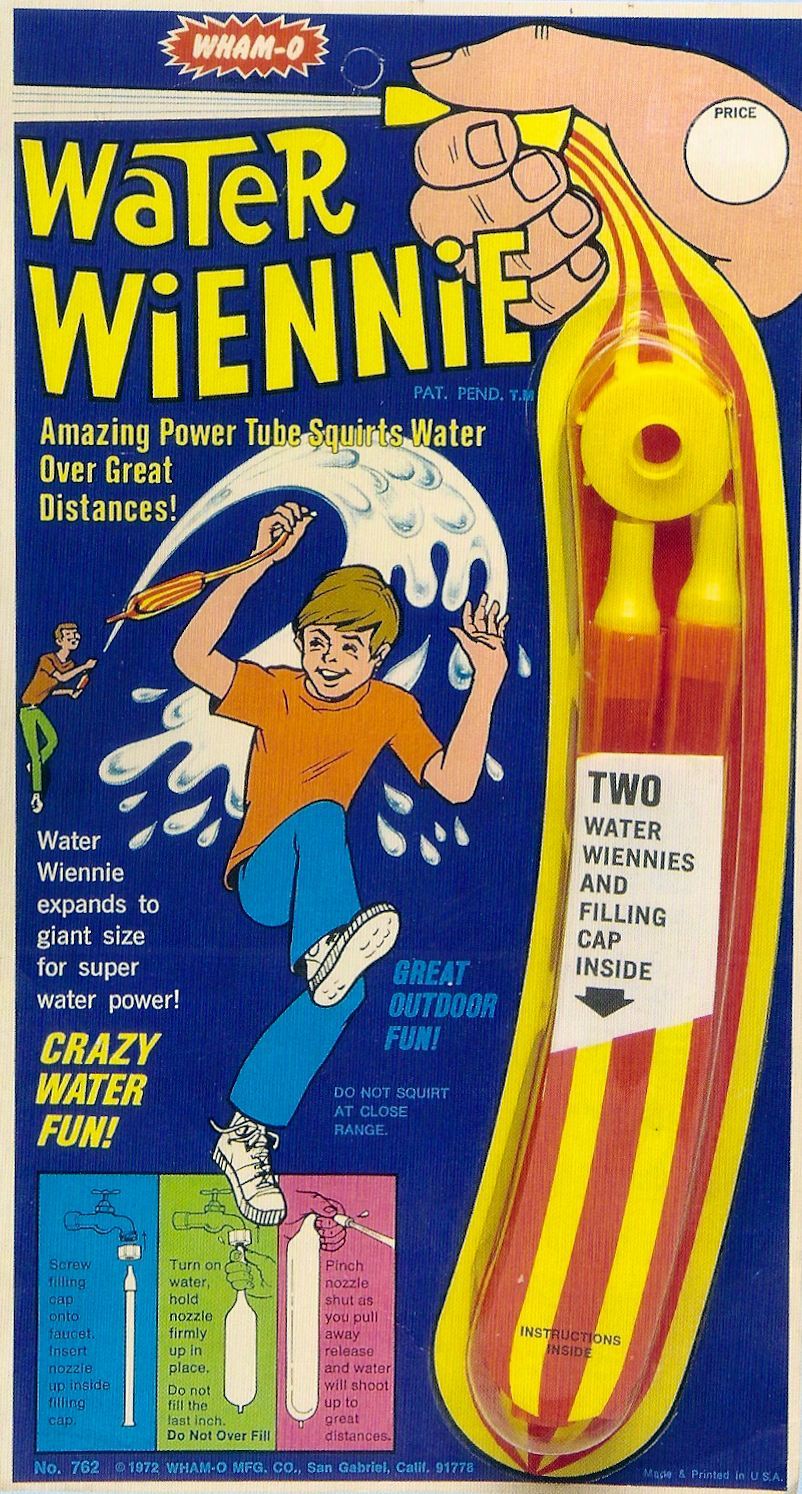 The Slip ‘n’ Slide was the product of an upholsterer (Robert Carrier) who used Naugahyde to make his invention.  He pitched it to Wham-O, and it was released in 1961- and Summers have never been the same since.  Wham-O also released a number of  water-based products – the Water Wiennie being among the less memorable. 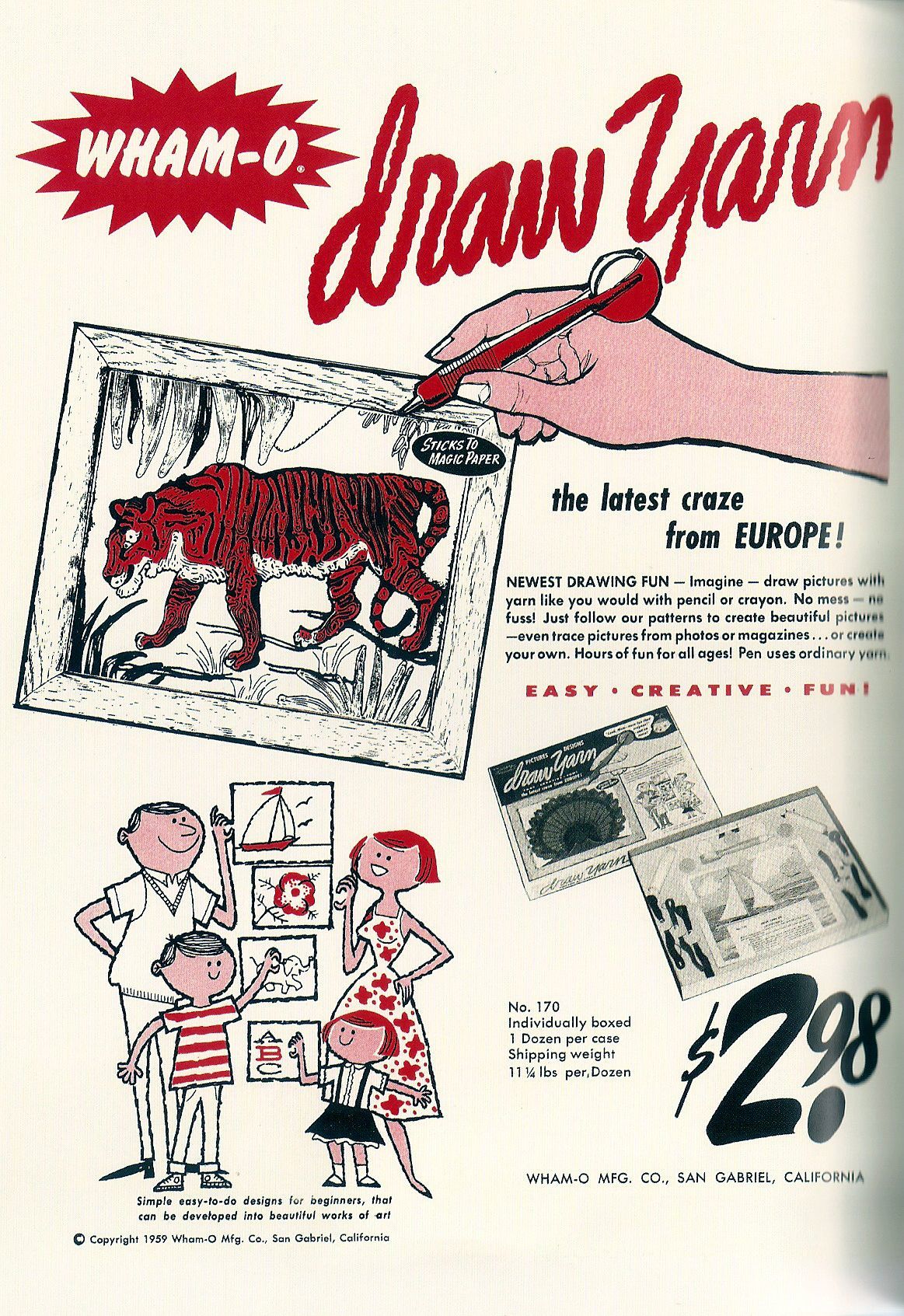 “The latest craze from Europe!”  Hmmm.  I didn’t live in Europe during the late 1950s, but I kinda doubt Paris street art was ablaze with yarn drawing. 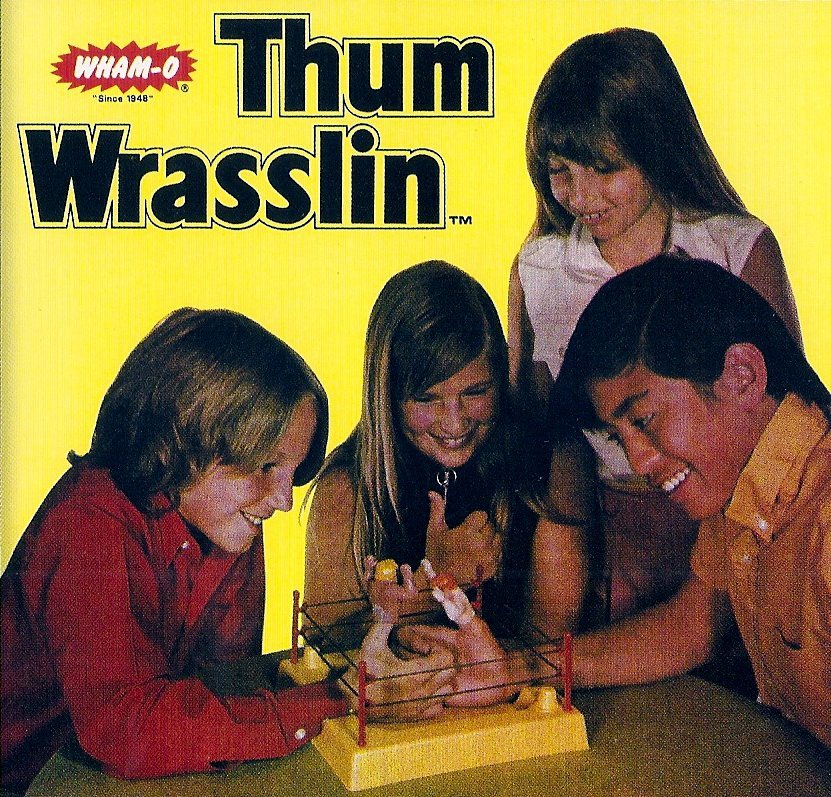 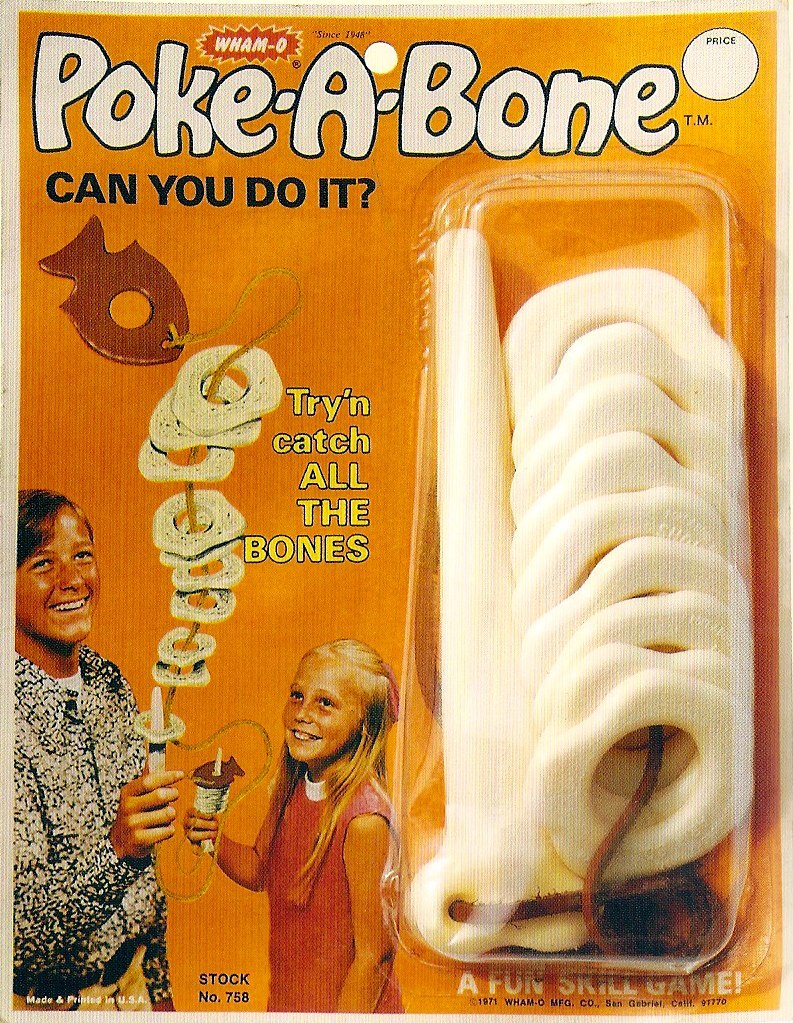 From homemade slingshot to Poke-A-bone, it’s been a wild and interesting ride.   Wham-O was willing to try anything, and this sense of adventure brought a lot of joy to the lives of 1950s-1970s kids. Thanks, Rich and Spud.