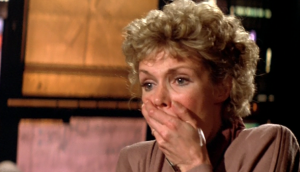 Back in 1979, Kenner Toys marketed products from Ridley Scott’s Alien (1979) to kids at American toy stores…even though the film was R-rated and featured chest-bursting, silver-toothed monsters.  A brave nine-year old could visit Toys ‘R Us and buy a large Alien action figure, or the Alien movie viewer…which showed imagery from the film. 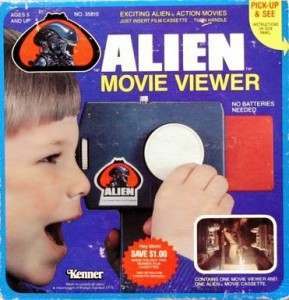 On the other end of the spectrum, however, there were also a number of mainstream space adventure movies from the same post-Star Wars era that — while not upsetting to children, overall — nonetheless featured images of pure terror that then left an indelible impression on the young of the era.

Below are five of the most unforgettable horror scenes that kids of the 1970s unexpectedly encountered in mainstream cinematic space adventures. 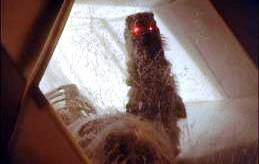 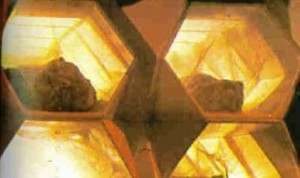 Although the same scene had been broadcast on ABC-TV in prime-time in 1978, children attending the theatrical version of Battlestar Galactica (in Sensurround…) in the Spring of 1979 were faced with a truly horrifying image.

In the last quarter of the film, the Colonials face a deadly trap on the planet Carillon. They are fattened up at a casino by the insect-like aliens called Ovions.  And then, after being abducted on an elevator, they are harvested as food in a subterranean hive. Once trapped, they are then eaten by Ovion grubs.

In one image from this scene, an Ovion infant — replete with glowing red eyes — is depicted sitting in its honeycomb with the bones of a devoured human nearby.

Today, it sure is fun to remember the original Battlestar Galactica as campy “popcorn” (writer Ron Moore’s precise description of the Glen Larson program…), but that searing image of baby bugs eating overstuffed, unsuspecting humans, really packed a wallop if you were nine years old. 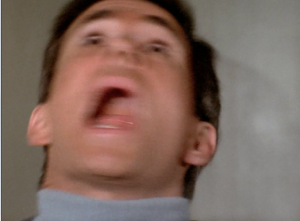 The Black Hole was Disney’s first PG-rated film.  Yet this film starring Robert Forster, Yvette Mimieux and Ernest Borgnine also features more overt, on-screen horror imagery than any other film featured on this list.

Not only does the film culminate with a visit to Hell, in which man and machine blend together as one, hideous monstrosity, but one other scene stands out as being truly nightmarish.

On the control deck of the Cygnus, Dr. Durant (Anthony Perkins) removes the mask of a “humanoid,” a speechless servant assumed to be a robot.  He finds underneath the reflective mask, however, a lobotomized human face staring back at him, its cheeks sunken, its eyes…empty of all life, all soul.

Very quickly, the evil robot Maximillian flies down, activates its propeller arm attachment, and disembowels Dr. Durant for his discovery of the truth.

Not only do we see Maximillian’s menacing approach and the whirring blades of his weapon.  We also see him pulp a book that Durant holds up defensively.  Then we see Perkins screaming in agony, in intense close-up, as the propeller blades…gut him

Again, it’s important to remember that this is a Walt Disney movie.

Star Trek: The Motion Picture was rated “G” — meaning that the film is suitable for “general audiences” — and yet one early scene in the Robert Wise film depicts a malfunctioning transporter beam.  Two crewmembers are beaming up during the accident, and they scream in pain as their molecules are re-arranged into something…unspeakably horrible.

Then, when the transporter cuts out, Starfleet Command reports that the two crewmembers “didn’t live long…fortunately.”

What makes this moment infinitely worse (and infinitely more scarring…) is that the transporter room is not the happy, well-lite place of the TV series, but a dark chamber of horrors, dimly lit. And the transporter operators stand behind a screen, as if protecting themselves from the process.

After this scene, can anyone truly blame Dr. McCoy (DeForest Kelley) for voicing reservations about using the transporter?

There was very little blood in Star Wars (save for a severed arm in the cantina sequence), but its sequel, The Empire Strikes Back, is a different story.  Luke is attacked by a vicious snow creature, the Wampa and he retrieves his light-saber just in time to sever one of its hairy arms.

But the true horror arrives next.

After Luke escapes from the Wampa’s den, Han Solo finds him freezing to death in the snow.  With temperatures dropping rapidly, and his kindly Tauntaun succumbing to the elements, Han makes a choice.  He utilizes Luke’s light saber and cuts open the dead Tauntaun’s torso, and white, slimy guts fountain out.

Then Han stuffs Luke inside the warm biological tissue.

Again, a kid can easily countenance fighting back against a kind of abominable snow man figure, and seeing a little blood. But to see one of the inoffensive Tauntaun creatures die, and then very realistically gutted, is quite disturbing. 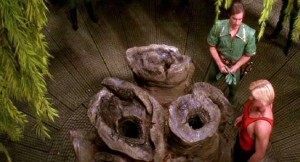 The 1980 version of Flash Gordon is a light, campy film, right down to its soundtrack by Queen.

But one scene set on Arboria is deadly serious.  One of Prince Barin’s (Timothy Dalton) young warriors (Peter Duncan) must pass a rite of adulthood.  He must insert his hand into a dead tree, and evade there the poison bite of a monstrous, slimy scorpion thing.

He fails the test.  The monster stings the warrior’s wrist, drawing blood, and rather than go mad from its poison, the warrior begs for death.  Barin complies, and runs him through with his sword.

Finally, Flash must undergo the test as well, and that monster is still lurking in the dead tree…ready to strike again.

This scene asks young viewers to deal with the notion of random, unfair death, as a young person dies for no reason.

I remember seeing this movie for my 11th birthday, and loving it.  But afterwards, the tree monster scene lingered in the mind.  The thought of sticking your hand down into that tree, into total darkness, and not knowing whether or not the monster would strike, was the stuff of nightmares.