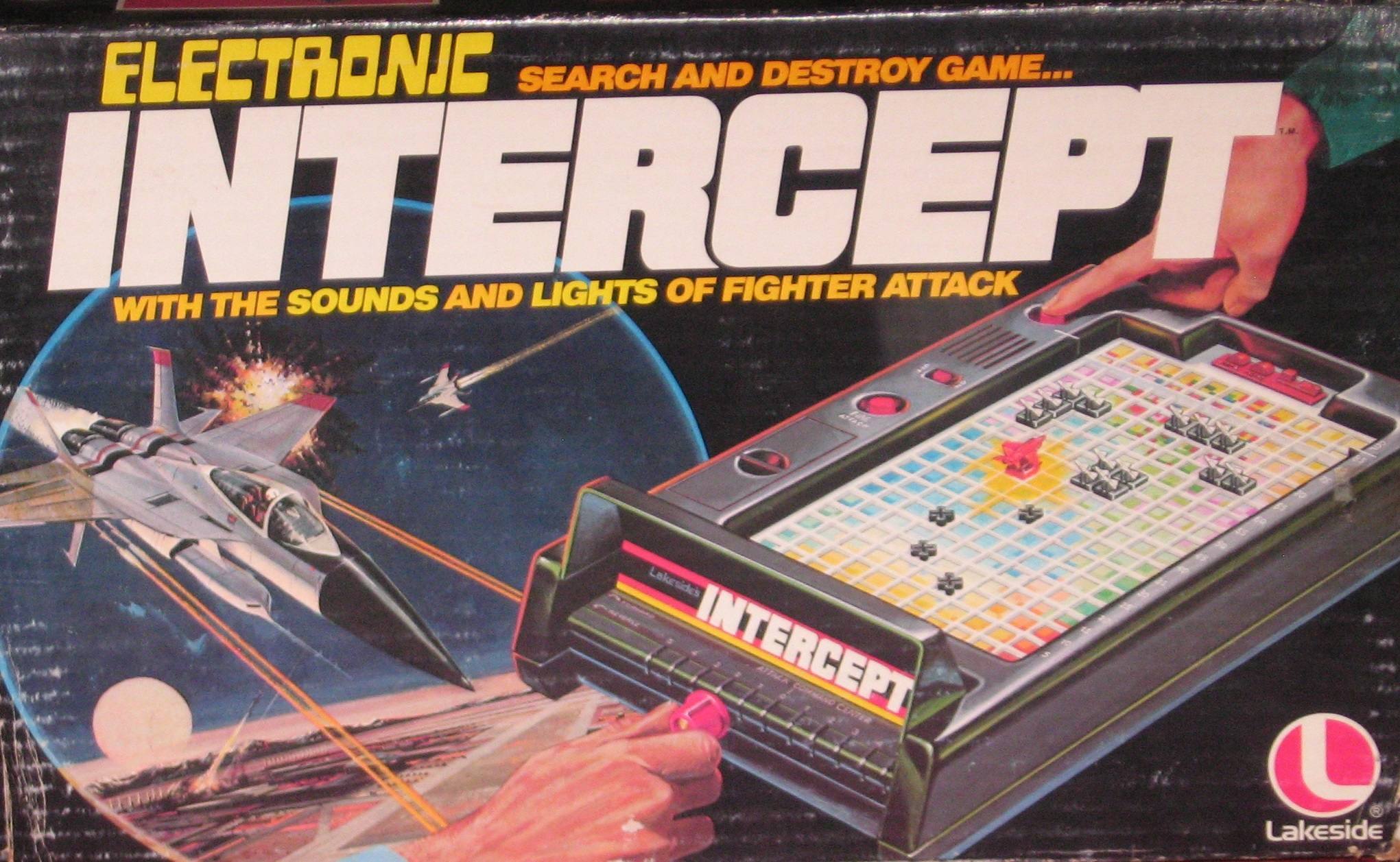 Back in September of 2014, I looked back at some of my favorite electronic toys of the 1970s here at Flashbak.

But there are so many other great electronic games and items from that era besides those I highlighted at that point, and today I wanted to go back remember some of the others as well.

These are the toys — circa 1976 -1979 — that came out just as the video game craze was beginning (thanks in large part to the Atari 2600), and a major shift was occurring in children’s interests.

In short, reruns of Star Trek (1966-1969) in syndication, and the theatrical release of Star Wars (1977) had brought about a renaissance in “outer space adventure.”  Accordingly, many of these electronic games seemed not only futuristic, but part of the new space age trend.

Here are some more of my favorite electronic toys of that time. 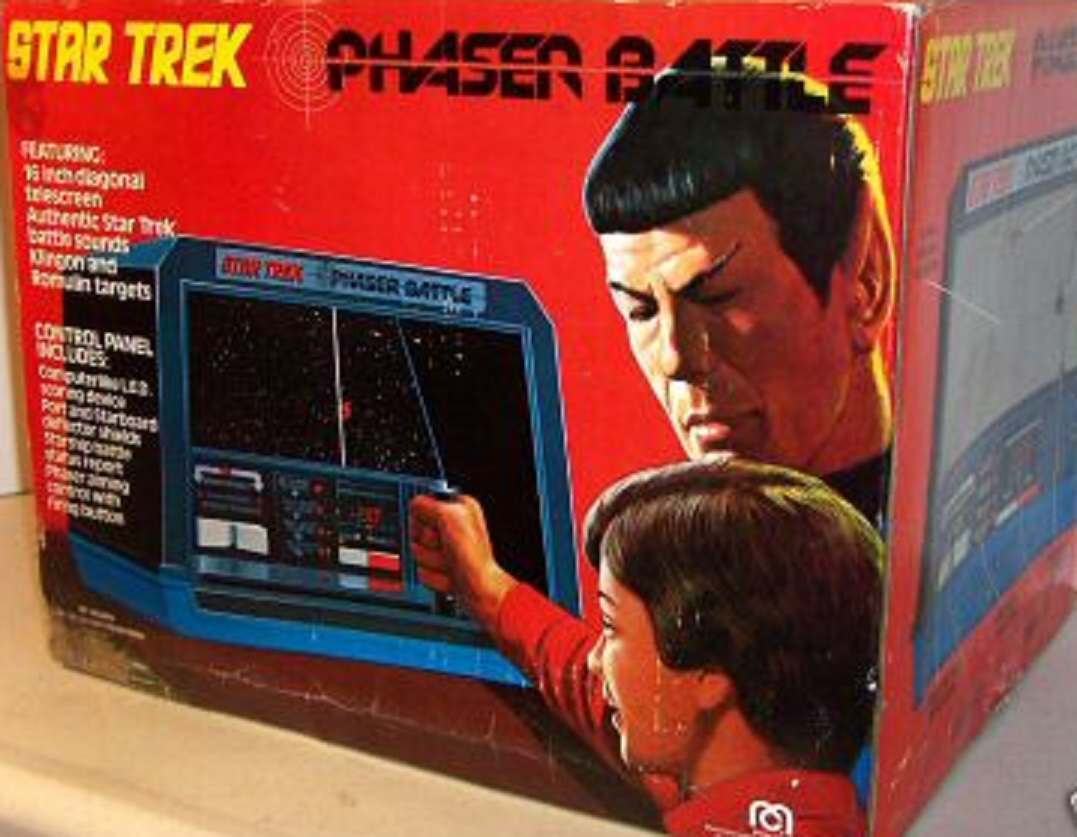 This gigantic box-like console electronic toy was released in 1976, but cost a lot of money for the time ($69.99).

Basically, the console is a control panel on the U.S.S. Enterprise, and the player watches through the tele-screen to target Klingon ships.  There’s a red “fire” button, and a primitive joy-stick of sorts to find your target and destroy it.

Today, this toy is ultra-rare…and ultra-expensive. 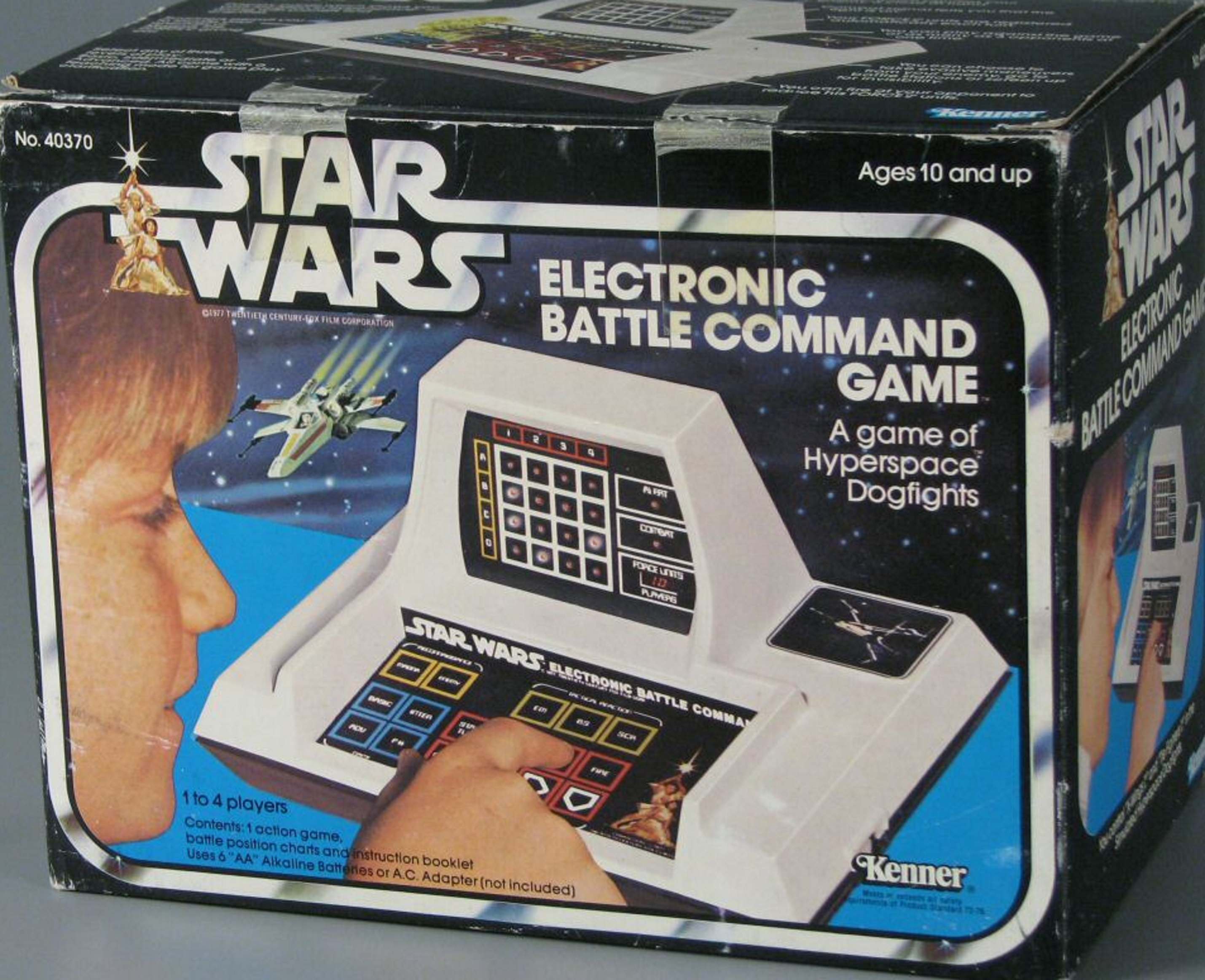 Released in 1978, this is reputedly the first officially-licensed Star Wars video game, though it isn’t a video game, exactly, as we understand that term today.

Instead this a “micro-computer game” of “hyperspace dogfights,” pitting your X-Wing against enemy TIE fighters. The game features three levels (basic, intermediate and advanced), and red-alert sounds and combat signals.

Plus, the game has some weird (and non-canon) features like the search for MAGNA, a “FORCE giving star.” 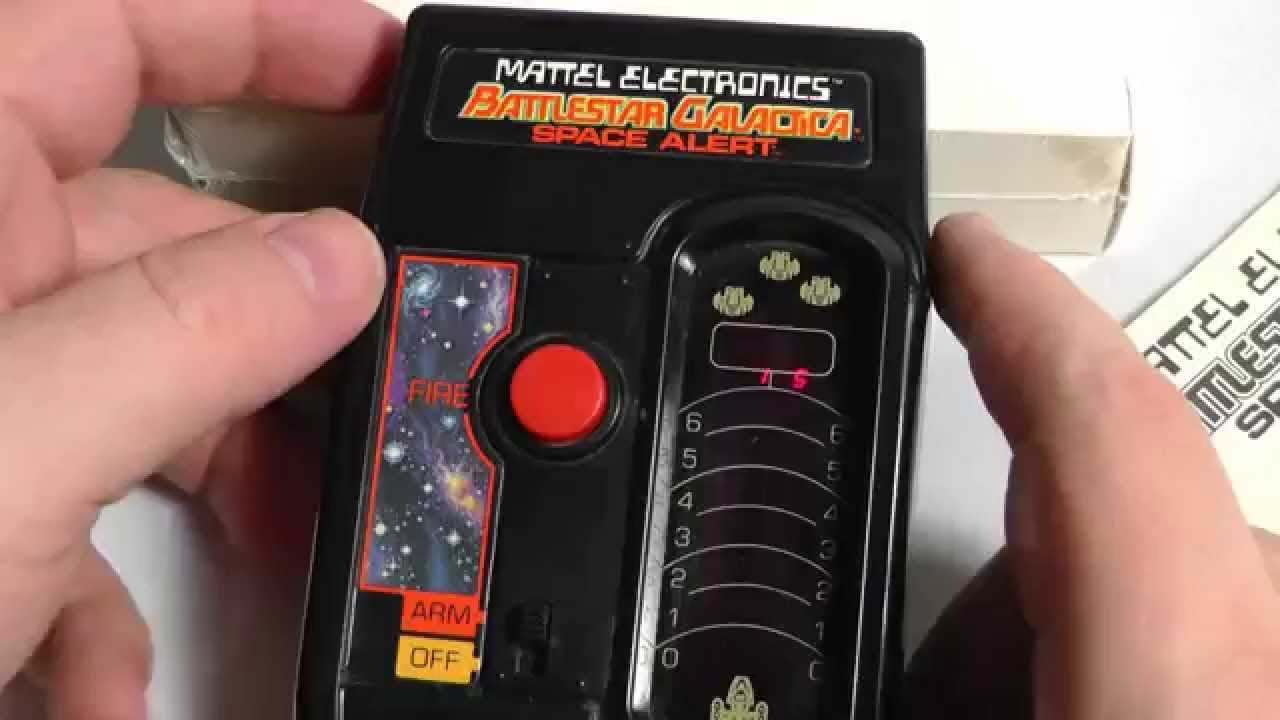 Okay, this is actually a lightly-redressed version of Mattel’s 1977 toy Missile Attack.

But this version has Battlestar Galactica art and illustrations on it.  You take command of the last battlestar in this handheld game as Cylon Raiders close in for the kill.  You can intercept them or destroy them with laser torpedoes! 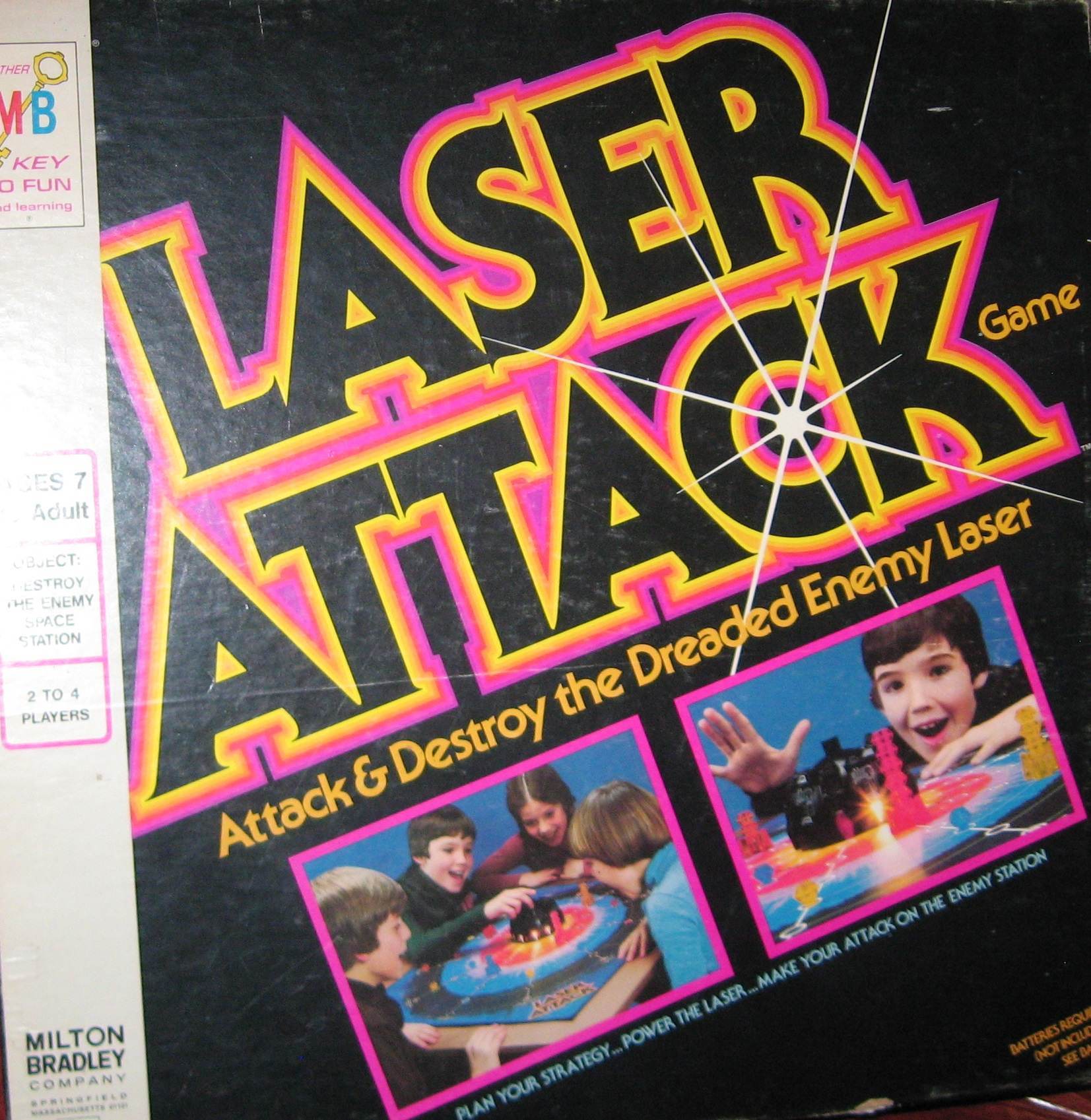 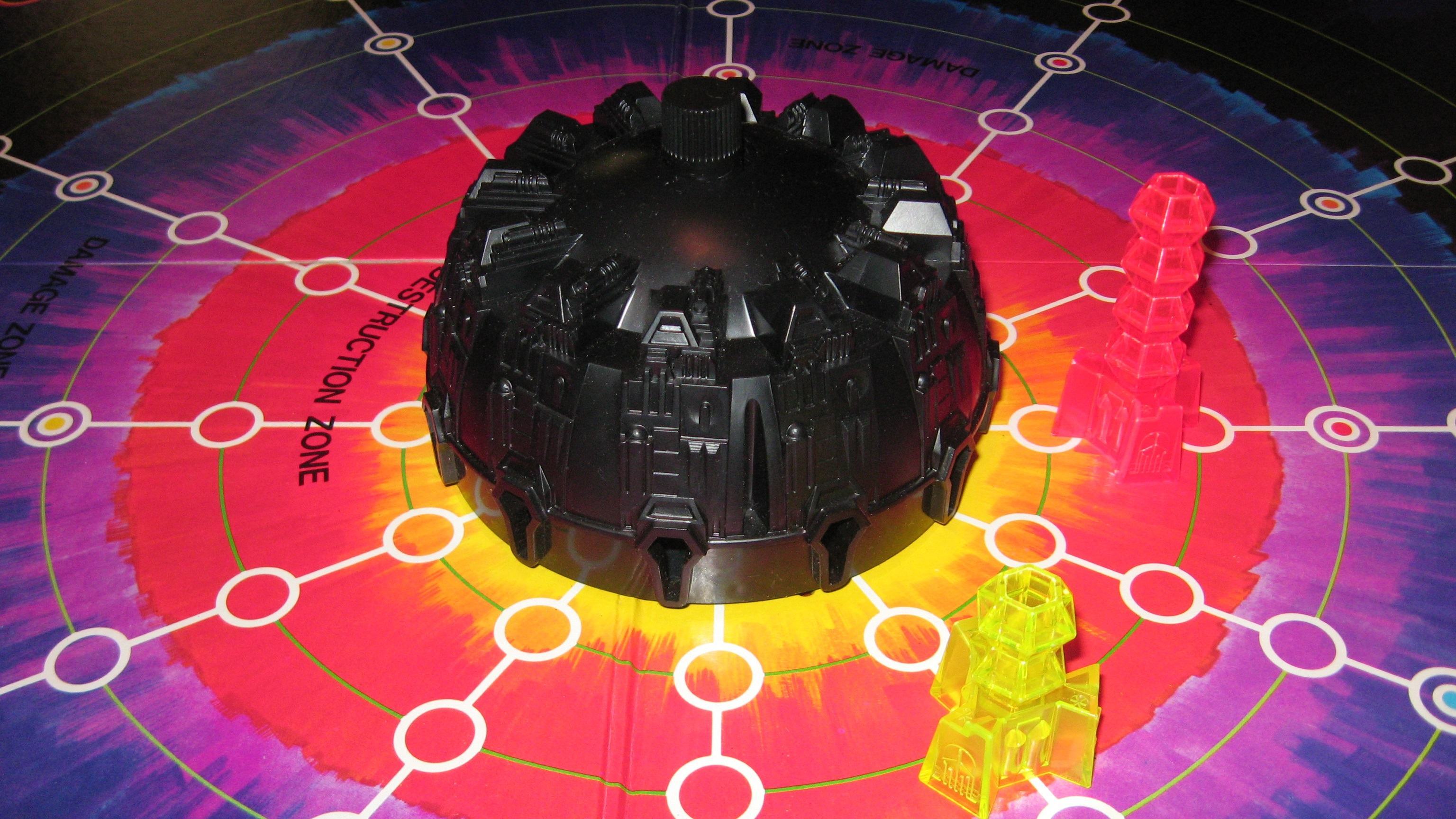 Here was the set-up for Laser Attack, as spelled out in the instructions:

“Our galaxy has been invaded by an alien Space Station whose powerful laser beam is drawing vital energy pods away from your spaceships Your mission is to attack and destroy this violator of the Inter-Galactic Peace Accord.”

“You must gather up your scattered energy pods before you risk an assault on the Space Station.  Then, using your energy pods, you block its ports, causing the laser to overload and self-destruct.”

The dreaded space station — a Death Star stand-in of sorts — is a finely-detailed dome, and one molded entirely in black.  It operates on two double A batteries, and when a player spins the button at the top of the station, a light emanates from a line of key-hole shaped ports.

Moving your translucent pods across the board, you must navigate the “damage zone” and finally “the destruction zone.”  Then, you plug your energy pods into the station.

As a kid, I just wanted to play with the evil space station (a perfect Legion of Doom HQ!) and the weird translucent pods made great dilithium crystals. 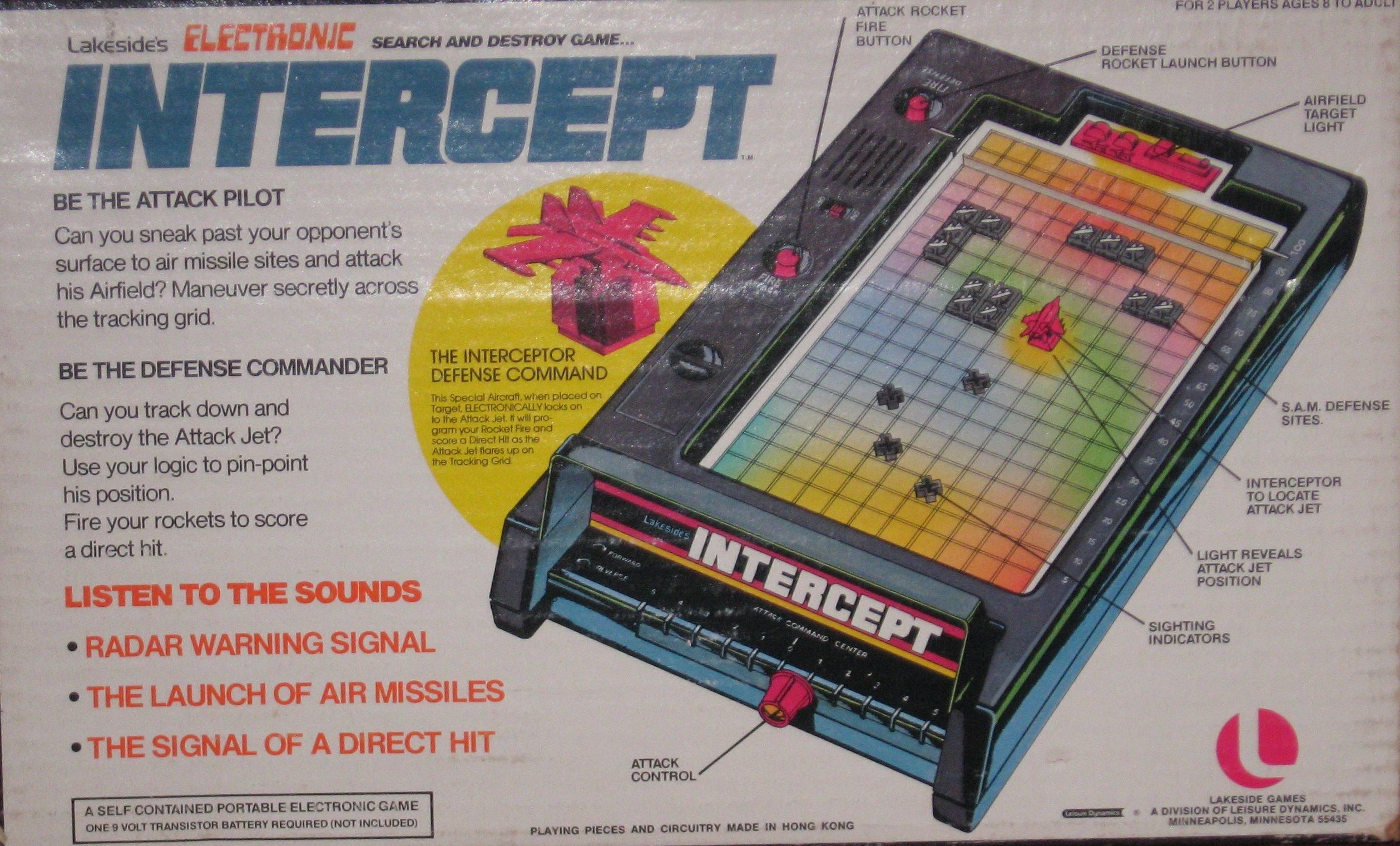 Intercept is a Cold War era game that allows you to be the attack pilot or defense commander during a nuclear strike.

As the stalwart attack pilot, you are tasked with sneaking past your opponent’s surface-to-air missile sites and attacking his Airfield. As the Defense Commander, you are tasked in this fashion: “Can you track down and destroy the Attack Jet? Use your logic to pin-point his position. Fire your rockets to score a direct hit.”

The coolest piece on the electronic game board board is a crimson “Interceptor.”

According to the box: “This Special Aircraft, when placed on Target, ELECTRONICALLY locks on to the Attack Jet. It  will program your rocket Fire and score a direct hit as the Attack Jet flares up on the tracking grid.”