ON this day in photos – February 26 1993:  At 12:18 local time a large car bomb exploded at New York’s World Trade Center killing six people and injuring 100 more. The bomb tore through three floors of concrete. It triggered a fire in one of the towers. 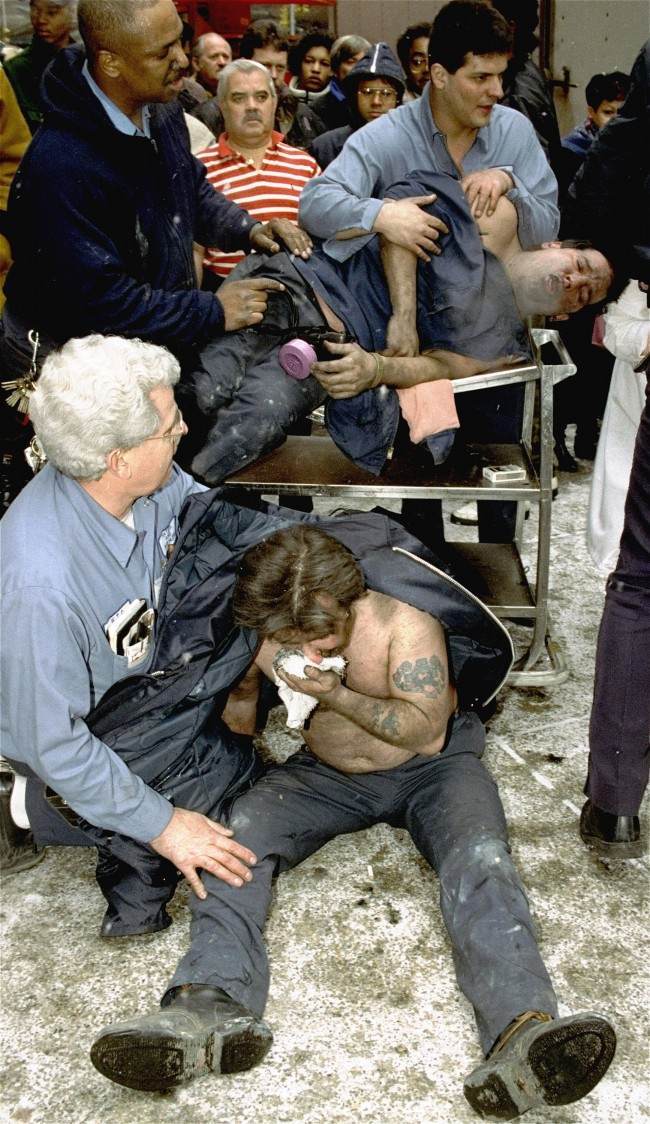 In this file photo of Feb. 26, 1993, Victims of a fire at the World Trade Center in New York are treated at the scene after an explosion rocked the complex. Twenty years ago a group of terrorists blew up explosives in an underground parking garage under one of the towers, killing six people and ushering in an era of terrorism on American soil. 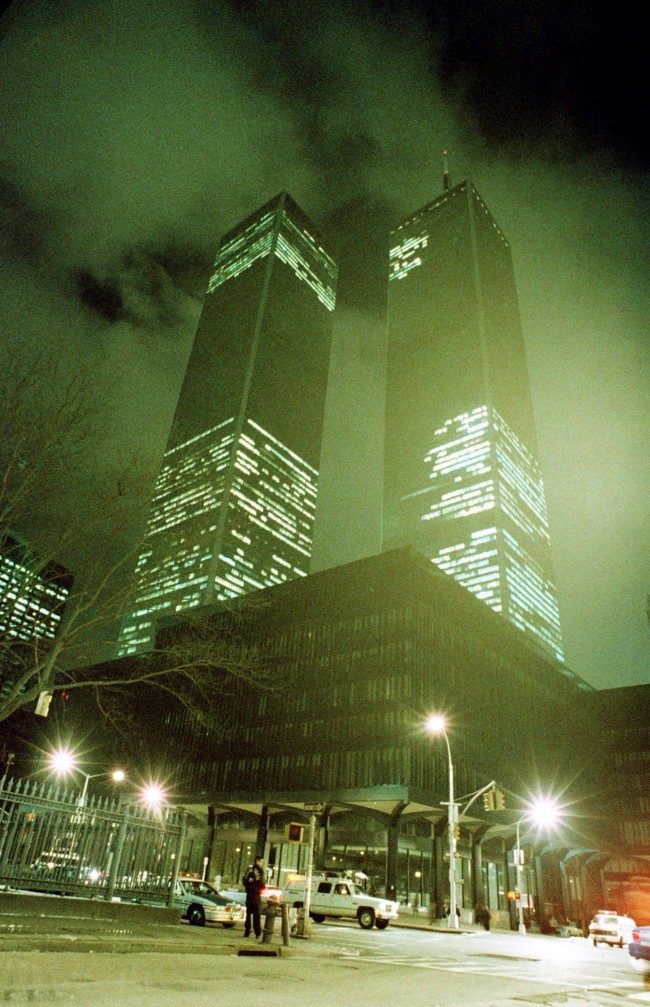 In this file photo of Feb. 26, 1993, the twin towers of the World Trade Center in New York City are shown in the aftermath of an explosion earlier that day. 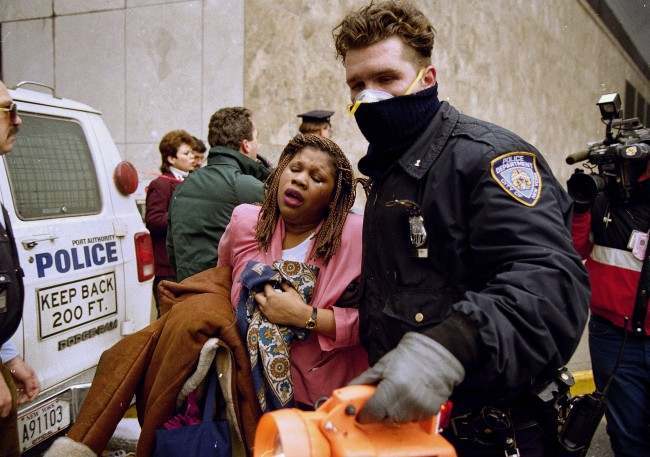 In this file photo of Feb. 26, 1993, a New York City police officer leads a woman to safety following a bomb blast at the World Trade Center. Twenty years ago a group of terrorists blew up explosives in an underground parking garage under one of the towers, killing six people and ushering in an era of terrorism on American soil. 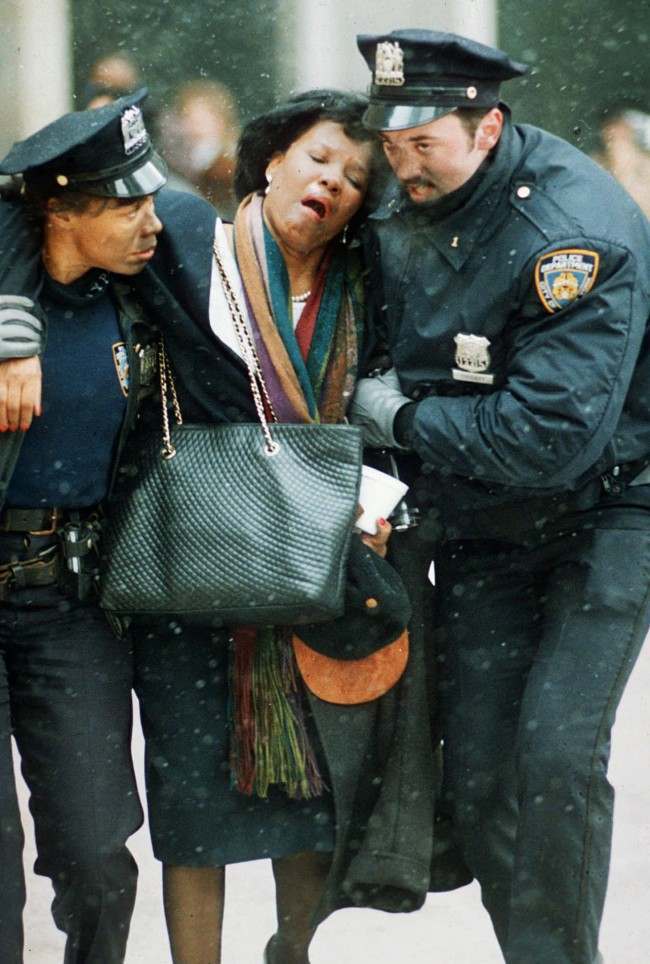 “We all have that feeling of being violated. No foreign people or force has ever done this to us. Until now we were.” 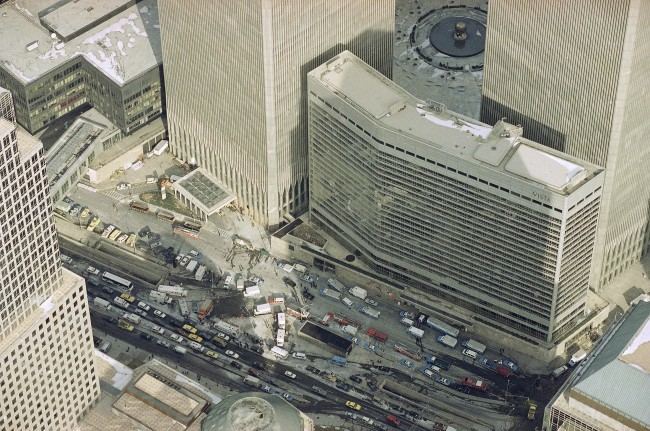 Manhattan’s West Street is jammed with police and emergency service vehicles in the aftermath of yesterday’s explosion that rocked New York’s World Trade Center’s twin towers and the Vista Hotel, foreground right, Feb. 27, 1993, causing evacuation of the financial center. Officials all but confirmed that a bomb caused the huge blast that left at least five people dead and injured hundreds. 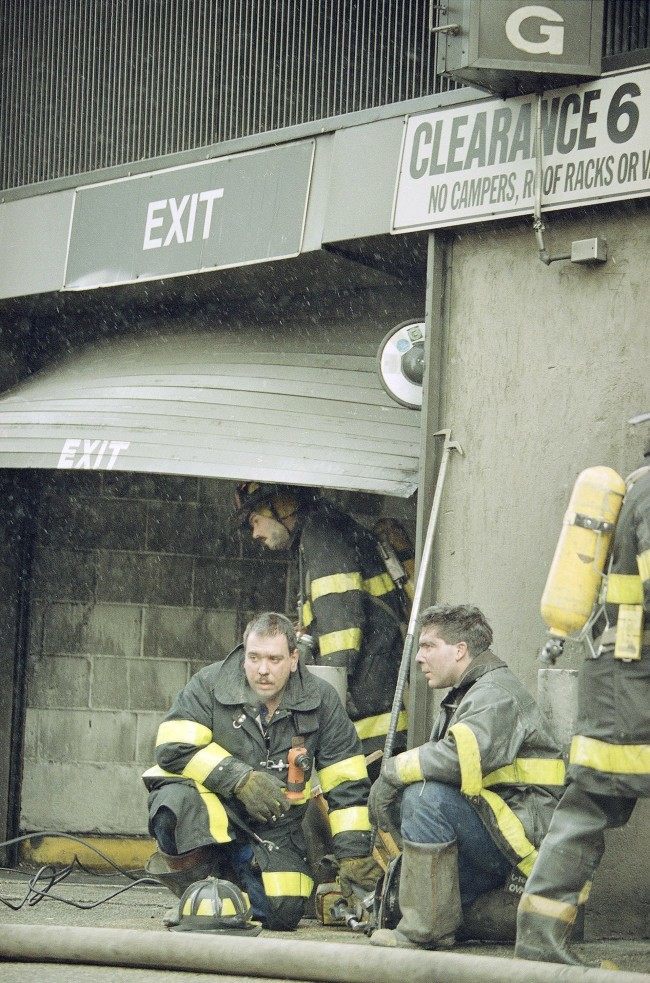 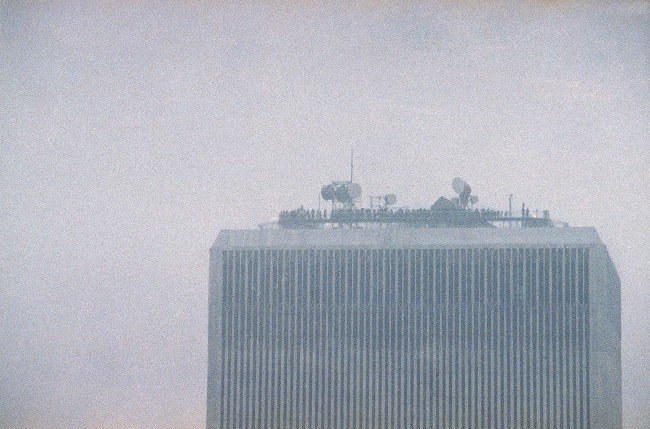 Desperate for air, some people smashed windows with office furniture. 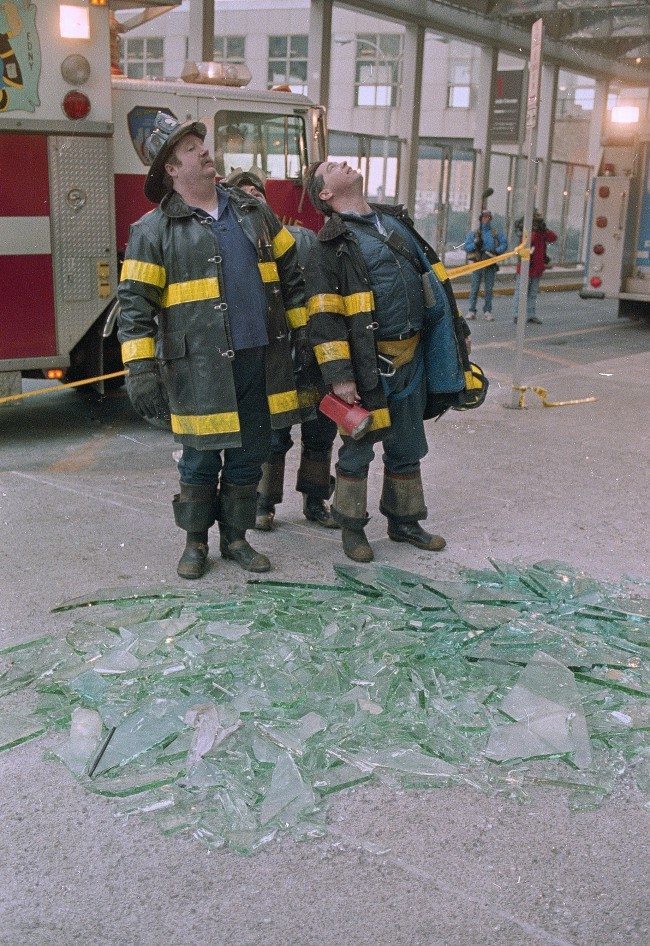 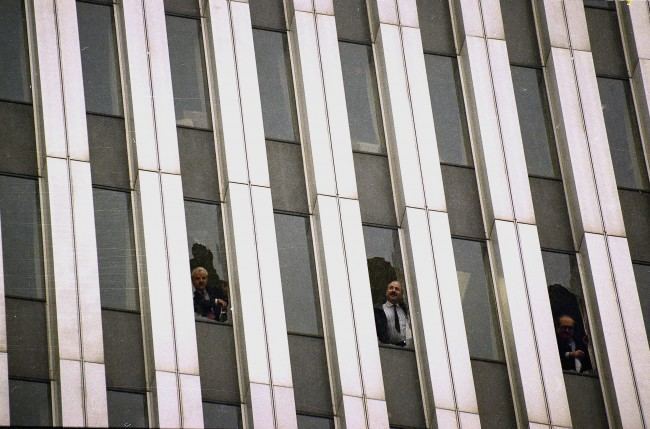 Workers peer through broken windows of the World Trade Center in New York, Feb. 26, 1993, after an explosion in an underground garage rocked the twin towers complex. Heavy smoke, caused by underground fires, was reported throughout the buildings, causing the evacuation of the buildings.

In October 1995 blind, Egypt-born Sheikh Omar Abdel Rahman, a Muslim cleric with the Islamic Group who preached at mosques in Brooklyn and Jersey City, was sentenced to life for masterminding the bombing. 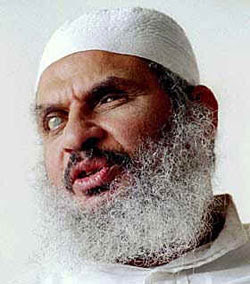 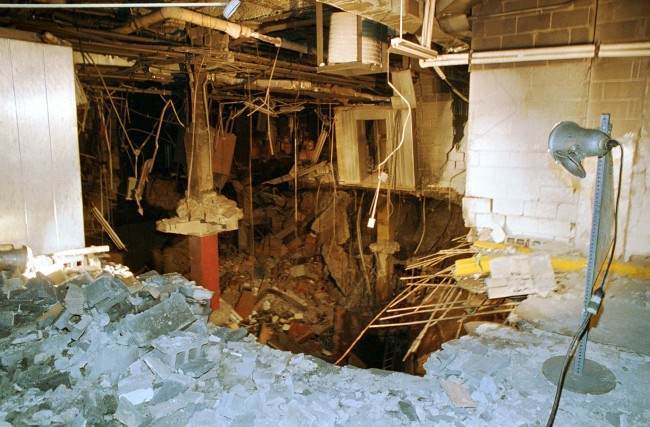 n this file photo of Feb. 27, 1993, a crater is exposed in an underground parking garage of New York’s World Trade Center the day after an explosion tore through it. Twenty years ago a group of terrorists blew up explosives under one of the towers, killing six people and ushering in an era of terrorism on American soil.

The Islamists had plotted a day of terror:  five bombs that were to blow up the United Nations headquarters, the Lincoln and Holland tunnels, the George Washington Bridge and 26 Federal Plaza, the Government’s main office building in New York.

Rahman was also convicted of conspiring to assassinate President Hosni Mubarak of Egypt during a visit the Egyptian leader made to the United States in 1993. 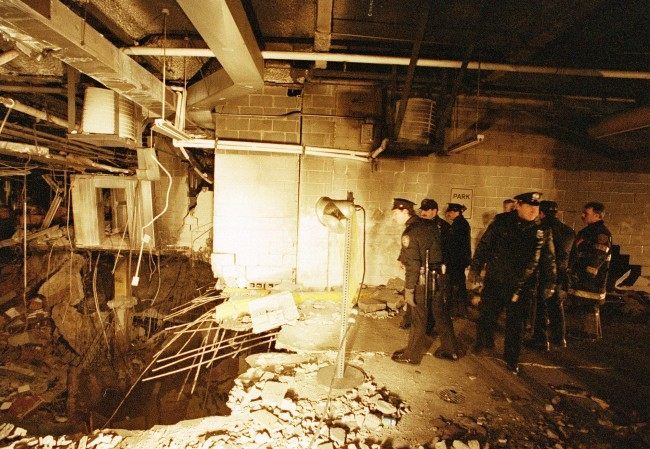 In this file photo of Feb. 27, 1993, police and firefighters inspect the bomb creater inside an underground parking garage of New York’s World Trade Center the day after an explosion tore through it. Twenty years ago a group of terrorists blew up explosives under one of the towers, killing six people and ushering in an era of terrorism on American soil. 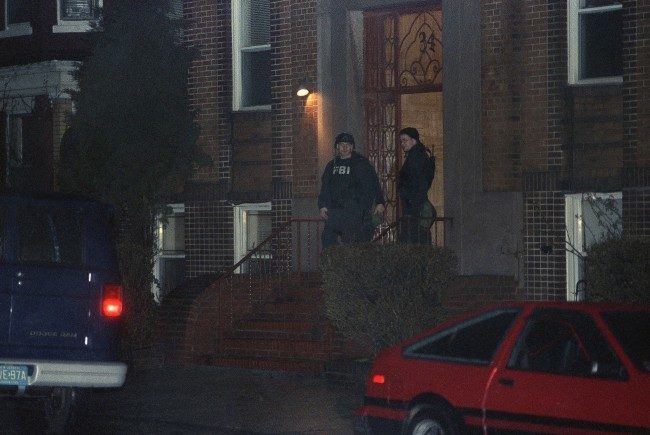 FBI agents remove evidence, March 10, 1993 in Maplewood, New .Jersey, home of Nidal Ayyad after the morning arrest of Ayyade in connection with the bombing of the World Trade Center.

On May 26, 1998, at an Al-Qaeda press conference,  a note smuggled out of Rahman’s jail cell is read to a gathering of top Al Qaeda leaders, and journalists, as the New York Magazine reported::

A fatwa of the captive Sheikh Omar Abdel Rahman … To all Muslims everywhere: Destroy their countries. Tear them to pieces. Destroy their economies, burn their corporations, destroy their businesses, sink their ships, and bring down their airplanes. Kill them in the sea, on land, and in the air.

Your brother Abdel Rahman, from inside American prisons. 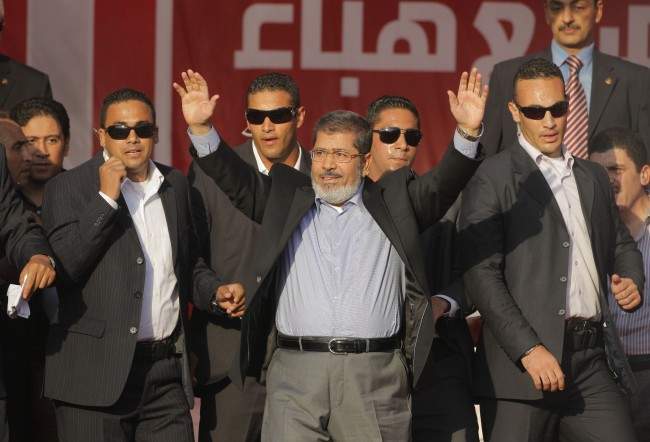 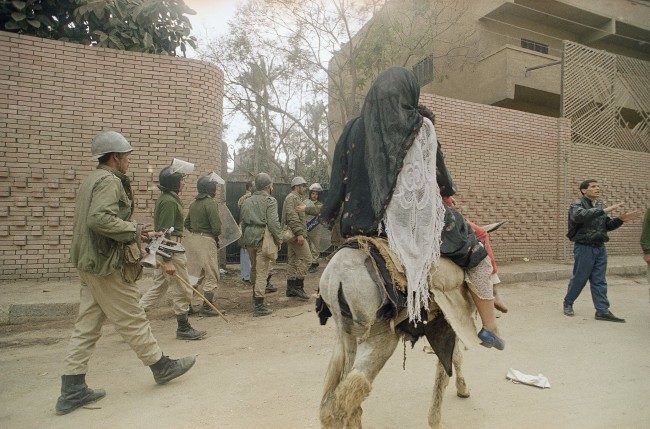 Egyptian security forces patrol in front of a church in Qaliuybya, Egypt on Sunday, March 14, 1993 that was torched on Saturday by angry parents protesting the expulsion of their children from school for playing tapes of controversial exiled Muslim cleric Sheik Omar Abdel-Rahman in the classroom. The four pupils expelled for circulating tapes of a radical Muslim preacher were reinstated on Sunday after their families staged the violent demonstration, police said. 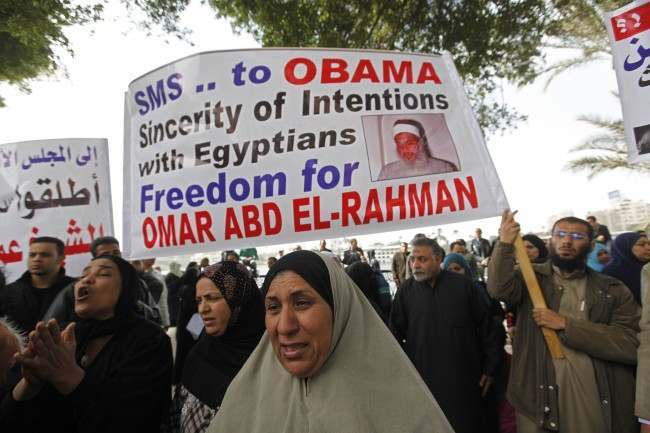 Demonstrators hold a banner demanding the release of Sheik Omar Abdel-Rahman, sentenced to life in prison in the U.S, during a protest in Cairo, Egypt, Sunday Feb. 20, 2011. The protest was also to demand the release of political prisoners in Egyptian jails and anti-government protestors arrested last week that are still in custody.

Will he be freed?