ON This Day in photos – February 20 1993:  John Venables and Robert Thompson (both aged 10) are charged with the abduction and murder of two-year-old James Bulger in Liverpool. 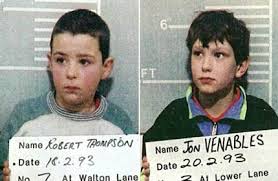 James went missing from the Strand Shopping Centre in Bootle the Friday before. His mother and father made appeals for his safe return. 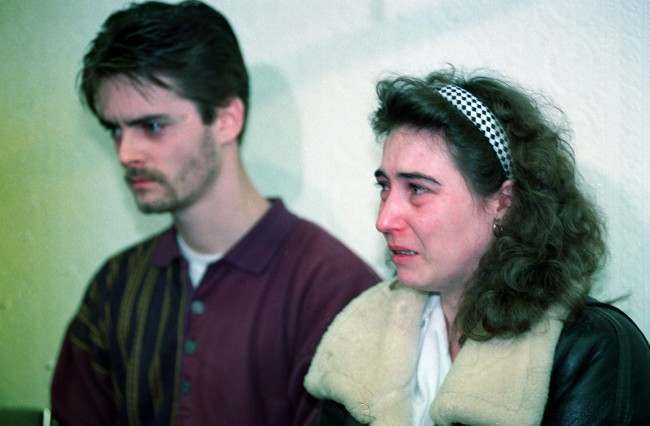 Denise Bulger, mother of James Bulger the 2-year-old boy who went missing in the bootle area of Liverpool, breaks down at a police press conference in Liverpool.
Date: 13/02/1993

The police had CCTV of James leaving the mall with two boys. 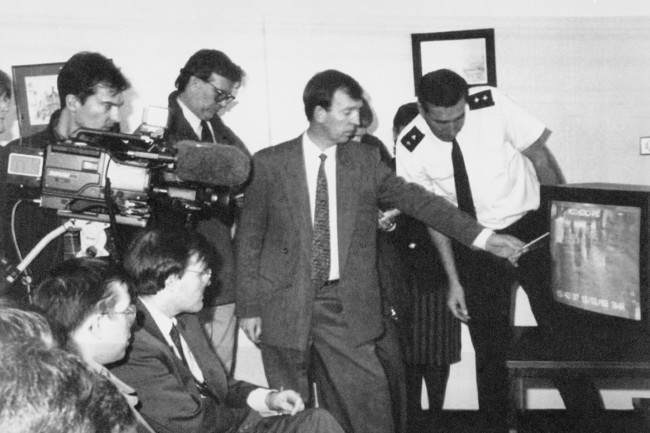 This picture was distributed. It would prove to be an enduring and chilling image.  A heinous crime was in motion. 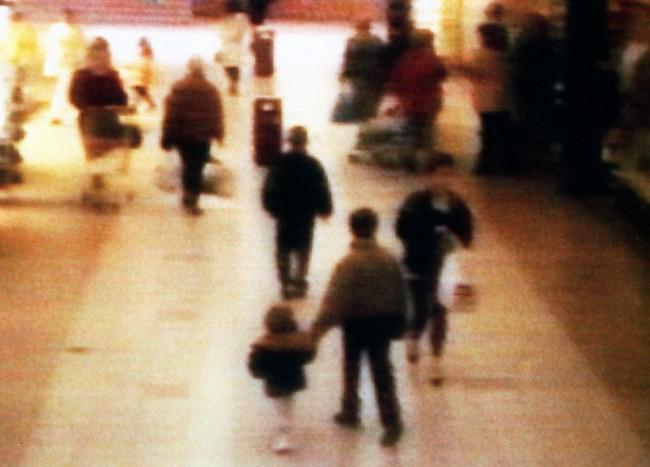 A video still of missing boy James Bulger, aged 2 years old, being led away by a youth in the ‘New Strand’ shopping centre in the Bootle area of Liverpool. James’s battered body was found on an isolated railway line. His schoolboy killers, Robert Thompson and John Venables, now free and living with new identities, were detained indefinitely following a high-profile trial at Preston Crown Court.

The plot was hatched. 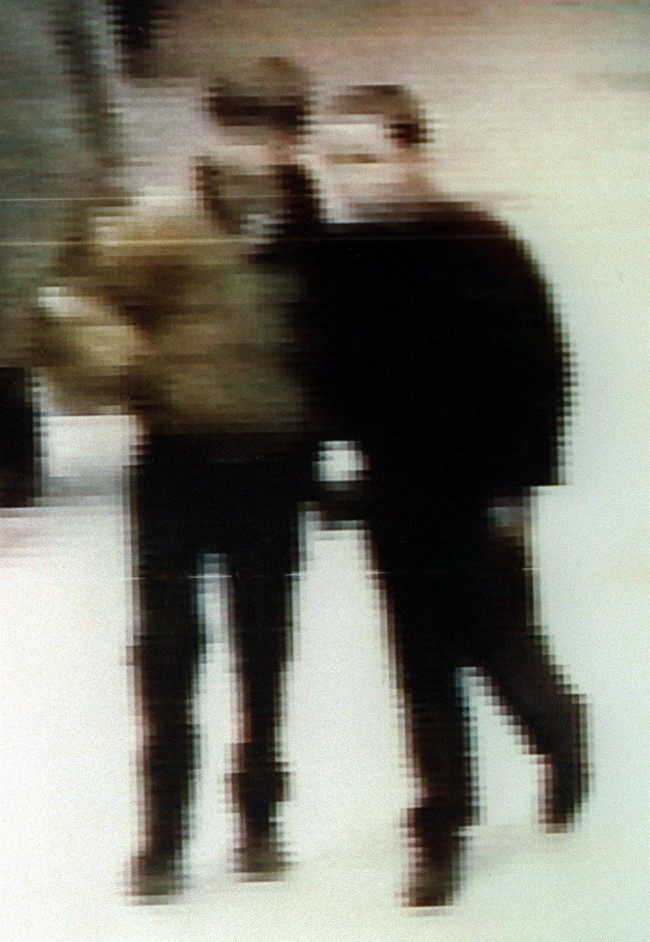 PA NEWS PHOTO 18/2/93 “ENHANCED” VIDEO OF TWO YOUTHS THAT POLICE WOULD LIKE TO QUESTION IN CONNECTION WITH THE MURDER OF JAMES BULGER.

On 14 February, James Bulger’s body was found on a railway line less than three miles away. It had been mutilated. 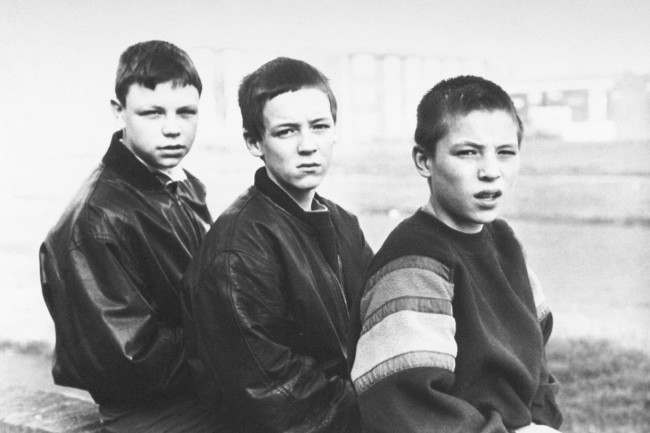 THREE OF THE BOYS WHO FOUND THE BODY OF TWO YEAR-OLD JAMES BULGER. L-R, STEPHEN GUNNIAN, JAMES RILEY AND HIS BROTHER TERENCE. Date: 15/02/1993 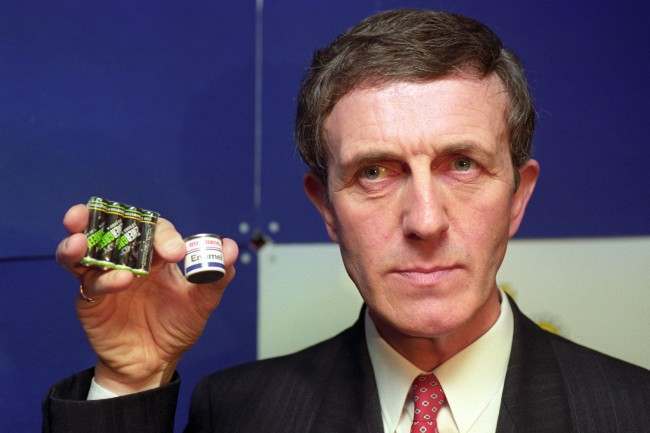 DETECTIVE SUPT. KIRBY HOLDS A TIN OF PAINT & A PACK OF BATTERIES WHICH THE POLICE BELIEVE ARE VITAL CLUES TO SOLVING THE MURDER OF 2 YEAR OLD JAMES BULGER, IN BOOTLE, LIVERPOOL.
Date: 16/02/1993

On February 18, Venables and Thompson were arrested. 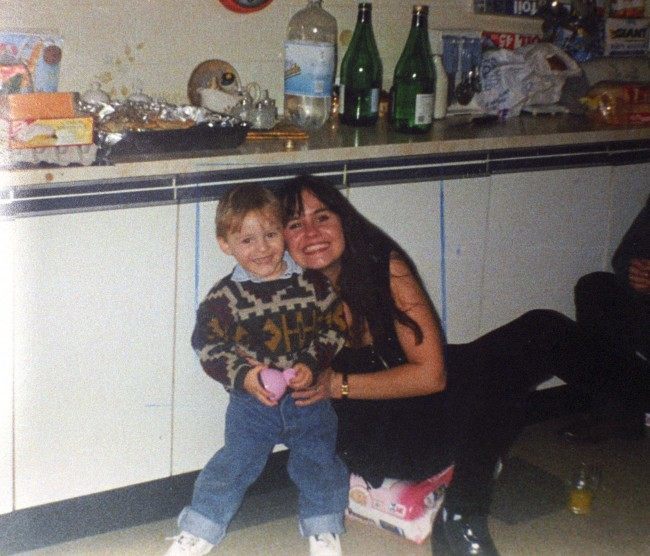 On February 19, the children who killed a child appeared at South Sefton Magistrates Court. 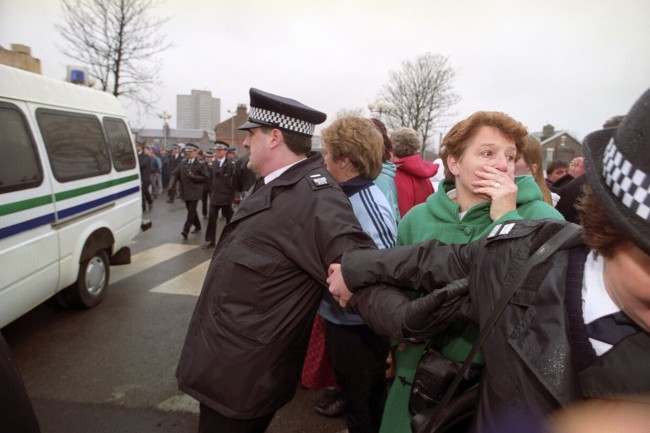 ANGUISH SHOWS ON THE FACE OF A YOUNG WOMAN BEHIND POLICE BARRIERS AS THE CONVOY CARRYING THE TWO-TEN-YEAR OLDS CHARGED WITH THE MURDER OF JAMES BULGER LEAVES SOUTH SEFTON MAGISTRATES COURT.

The boys’ families were moved to secret addresses to protect them from possible reprisals. The case is now infamous for the secrecy around the killers, who must never reveal their true indentities. 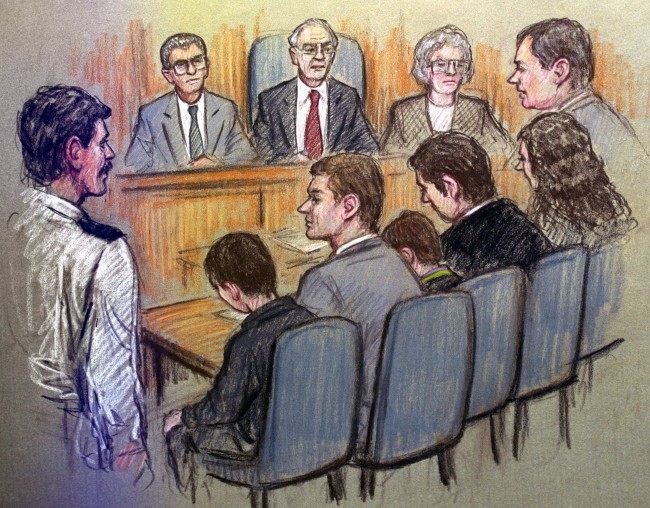 A BBC ARTISTS DRAWING OF THE SCENE IN SOUTH SEFTON MAGISTRATES COURT AS TWO TEN YEAR OLDS APPEARED CHARGED WITH THE MURDER OF JAMES BULGER.
Date: 03/03/1993 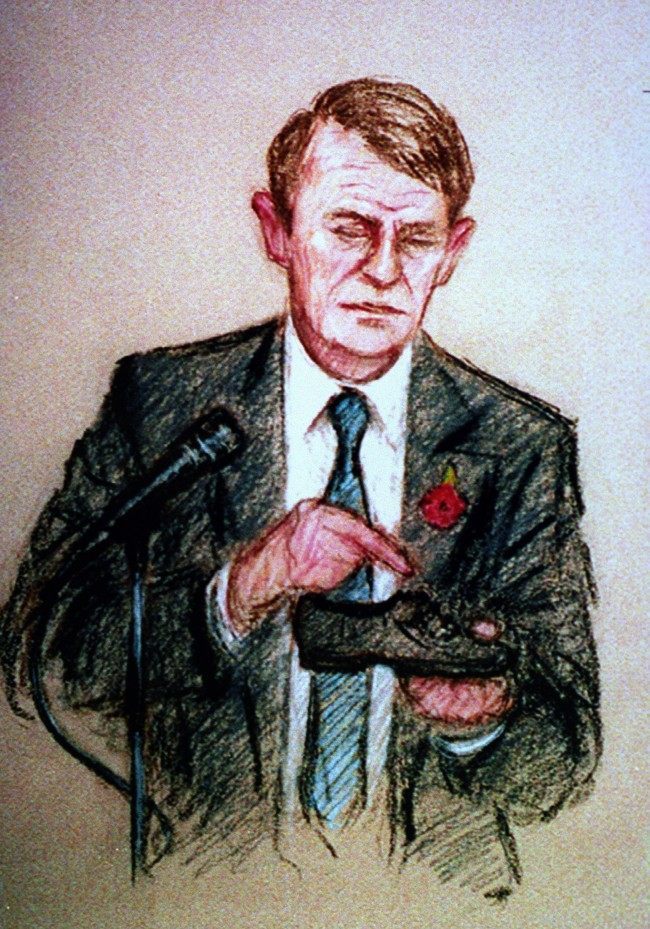 AN ARTIST’S IMPRESSION OF FORENSIC SCIENTIST PHIL RYDEARD AT PRESTON CROWN COURT WITH A SHOE USED IN THE FATAL ATTACK ON THE TWO-YEAR OLD BOY.
Date: 10/11/1993

In November 1993,  Jon Venables and Robert Thompson, were convicted of abducting and murdering James Bulger. 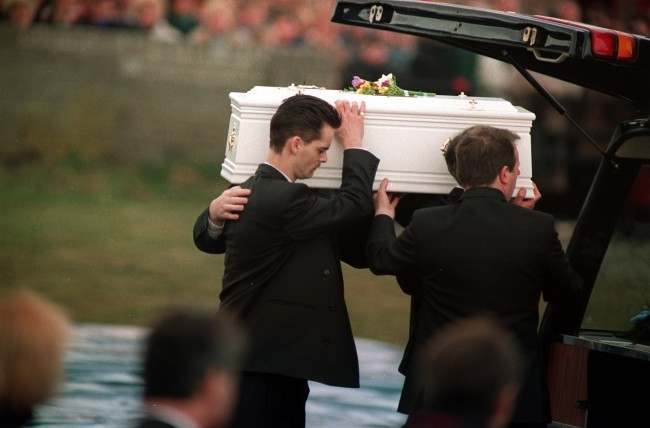 Justice Morland sentenced them both to eight years.

Lord Chief Justice Taylor raised the sentence to 10 years and Home Secretary Michael Howard put it up to 15, although the House of Lords ruled he had acted outside his powers in 1998.

In 1999 the case went to the European Court on Human Rights as lawyers claimed Venables and Thompson should not have been tried in an adult court.

In June 2001, Venables and Thompson went free. They are placed on life licenses. They are given secret identities. 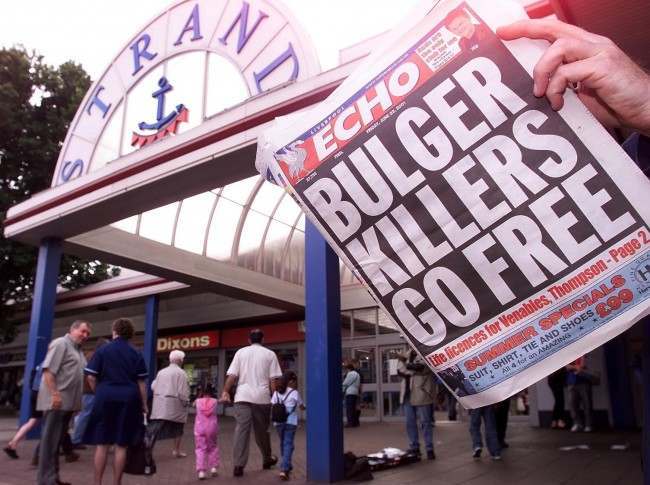 Local people read about the release of the killers of James Bulger in the Liverpool Echo newspaper, outside the Strand shopping centre in Bootle from where James was abducted by Venables and Thompson. The killers of toddler Jamie Bulger were preparing to be released. *The Parole Board ruled that they should go free. The board ruled that Robert Thompson and Jon Venables, now aged 18, were no longer a danger to the public after spending eight years in secure accommodation. But the decision has sparked anger among campaigners who wanted the pair to serve longer sentences. Date: 23/06/2001 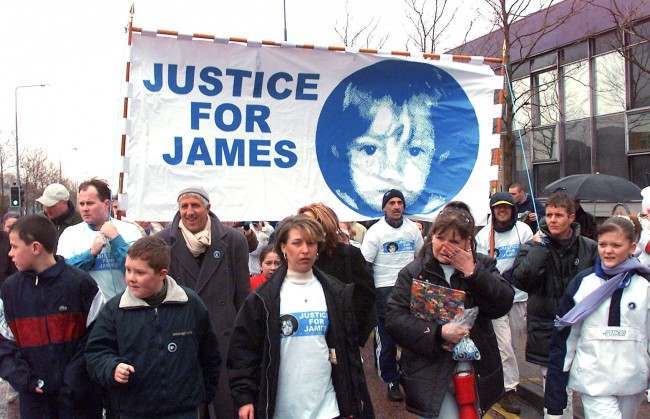 Denise Fergus, 33, centre, the mother of the murdered little boy James Bulger leading a march of more than 300 people in protest at the expected release of his killers. She led the procession through the streets of her home town in Kirkby, Merseyside * … to highlight her Justice for James campaign. The campaign was set up last December after the Lord Chief Justice, Lord Woolf, said the youngster’s killers’ tariff should be over. Marchers were walking two miles to St Mark’s Church in Northwood, where a memorial service was being said for James to mark the eighth anniversary of his march from Kirkby Town centre .
Date: 10/02/2001

Venabels is back in prison. 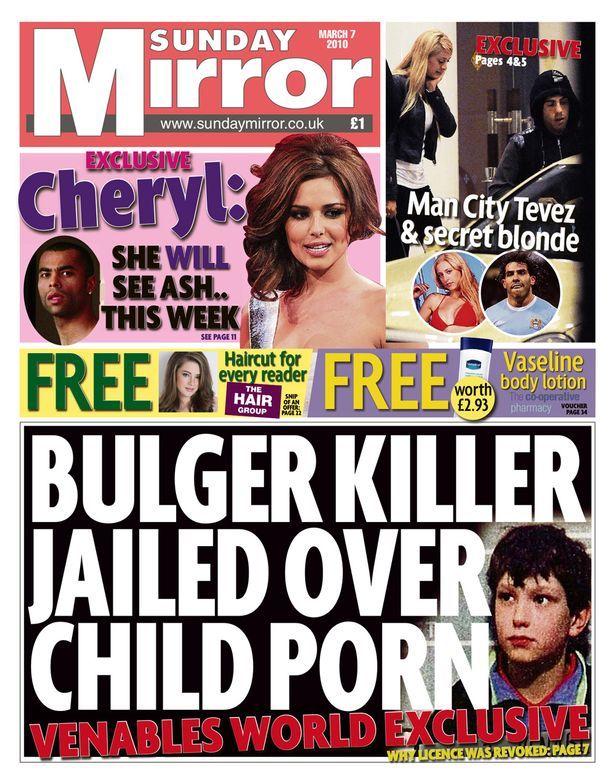 The story of the innocent child killed by children rumbles on.