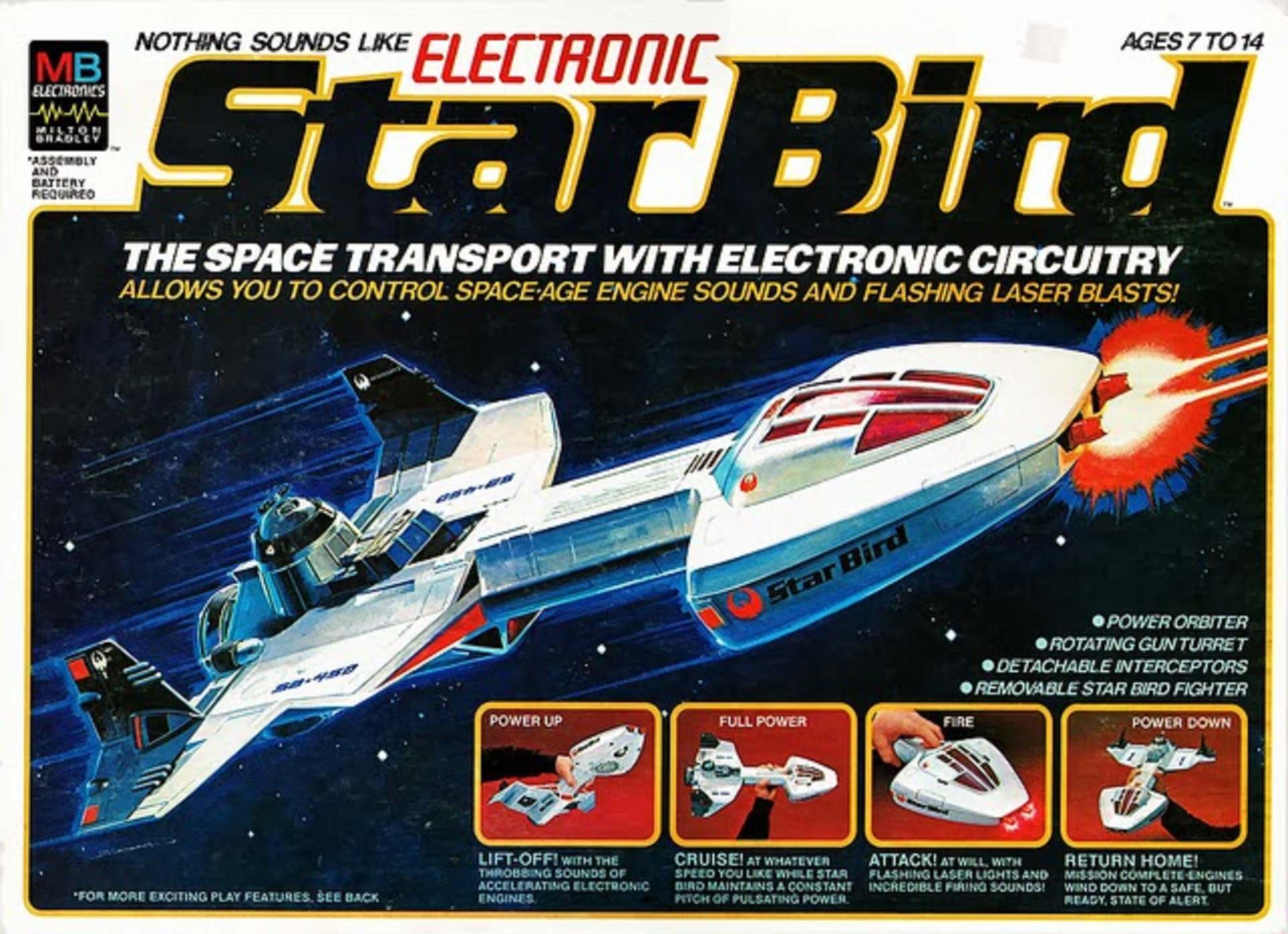 One of the great toy lines of the immediate post-Star Wars era comes from Milton Bradley.  Sold under the umbrella name of Star Bird starting in 1978, these space age toys are much-prized collectibles, especially today.

Here’s a TV commercial demonstrating how the toy works, and makes different electronic sounds depending on the craft’s attitude:

The ship was truly state-of-the-art for the time, because if you owned two Star Birds they could electronically duel with one other.

Or as the box put it: “Fire your photon beams and hit the alien spaceship. Hear distress signals and sputtering engine sounds!”

The Star Bird — like Gerry Anderson’s Starcruiser 1, which I recently covered — was actually several starships housed as one. Mounted on the dorsal side of the ship was an “escape pod” and cannon, in case of battle damage.

Also, perched on each wing of the large star bird stood a small one-man “interceptor fighter.”

Finally, the Star Bird itself could be disassembled to create a smaller fighter by detaching the engine and the cockpit section, and then re-assembling them together without the main hull.

An added bonus: the cockpit housing could be removed in this mode too and you’d get a third fighter, the so-called “power orbiter.” “For the fastest craft in the galaxy,” read the description, “release the orbiter from the front hull. Even this stream-lined orbiter controls full power over photon beams and engines.”

The second toy in the line was the Star Bird Command Base. This was a huge “action control center” for the Electronic Star Bird. 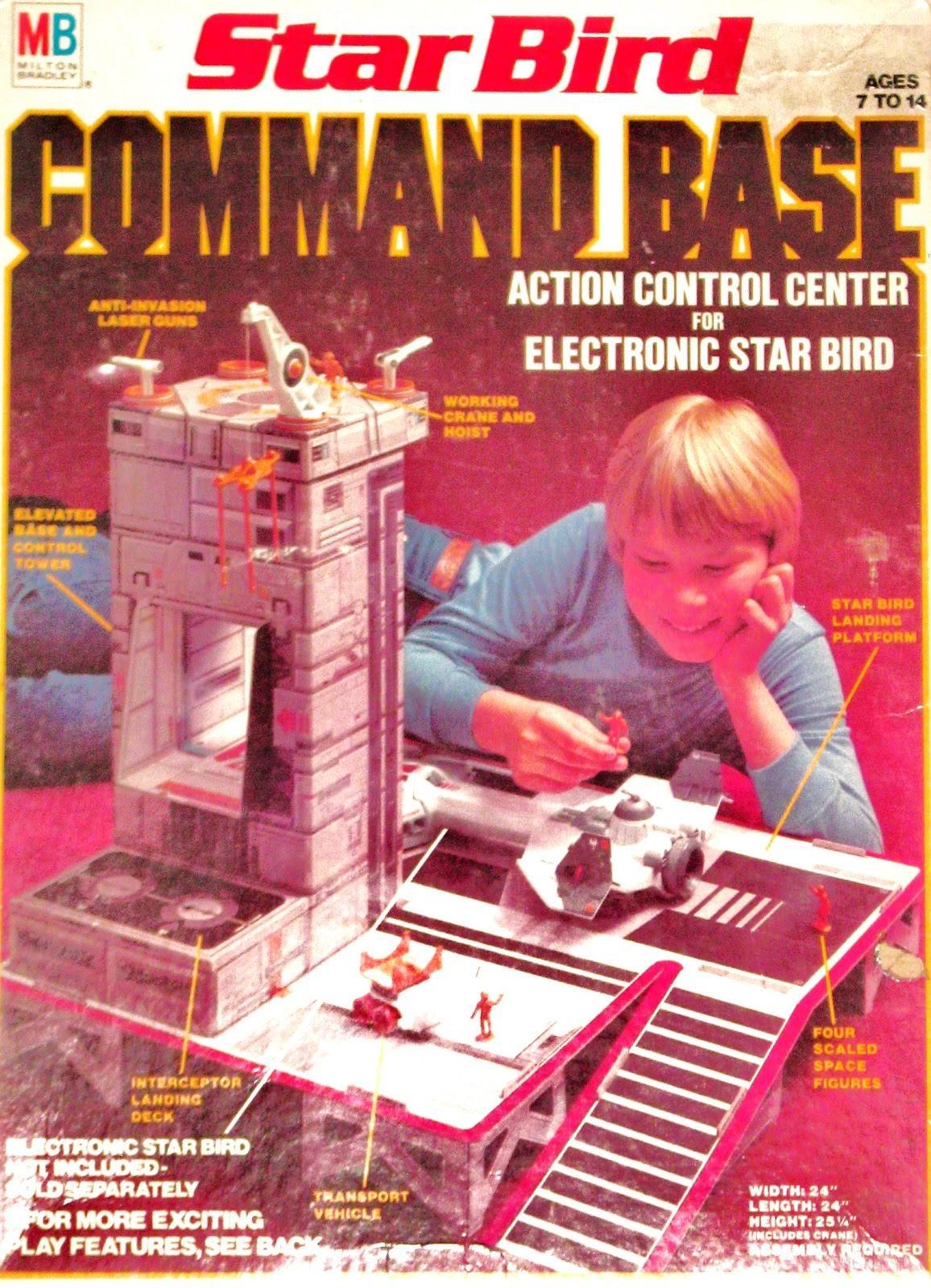 As the back of the box describes it: “The command base is a fabulous, fun accessory for more great excitement with your Star Bird.  Assemble the strikingly detailed fiber board and action plastic parts.  When you’re done, you have a specially equipped elevator base and control tower.”

Features of the base include: 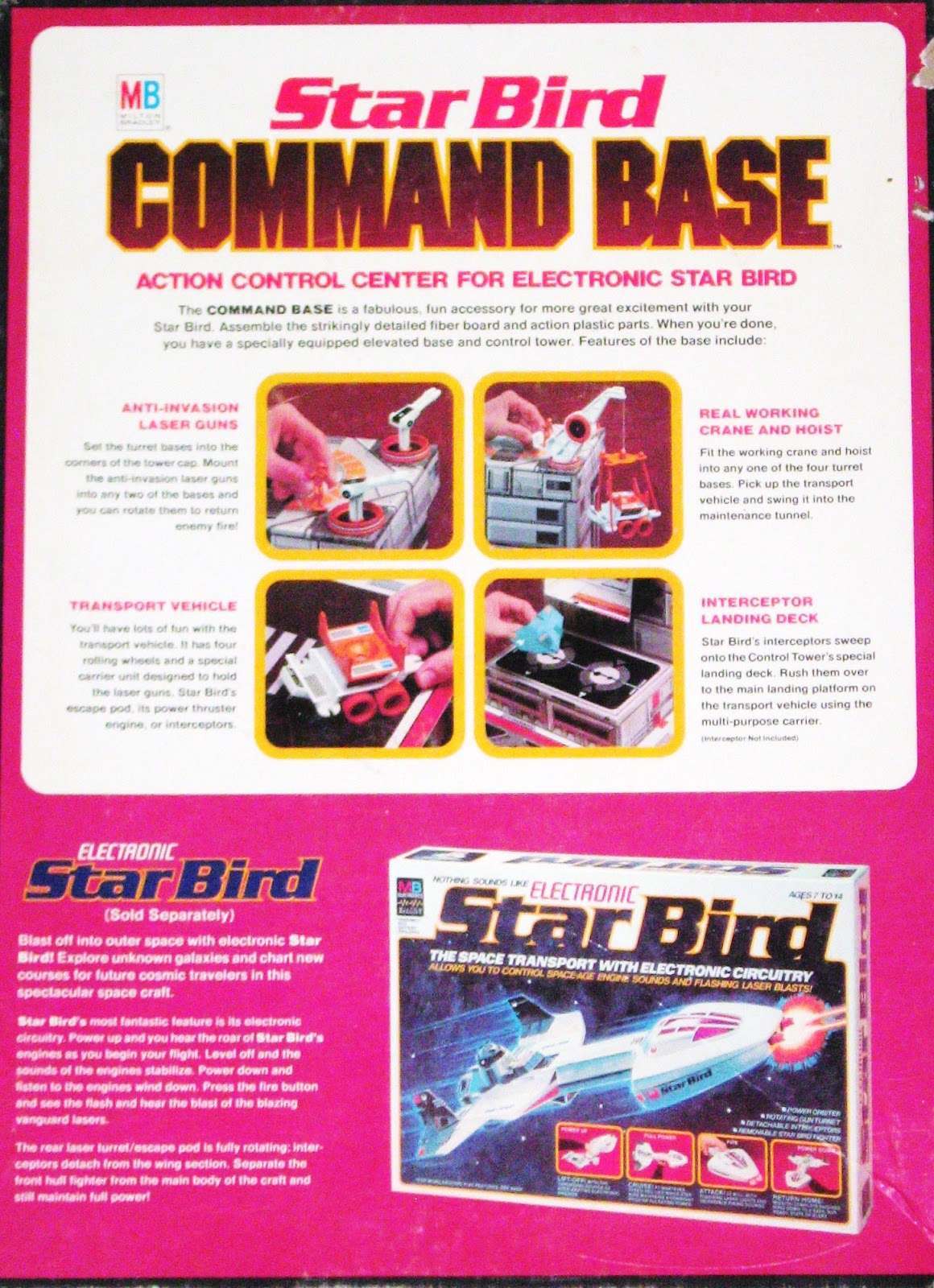 “Transport vehicle: “You’ll have lots of fun with the transport vehicle.  It has four rolling wheels and a special carrier unit designed to hold the laser guns, Star Bird’s escape pod, its power thruster engine, or interceptors.”

“Interceptor landings deck: Star Bird’s interceptors sweep onto the Control Tower’s special landing deck.  Rush them over to the main landing platform on the transport vehicle using the multi-purpose carrier.”

Here’s a commercial for the base; 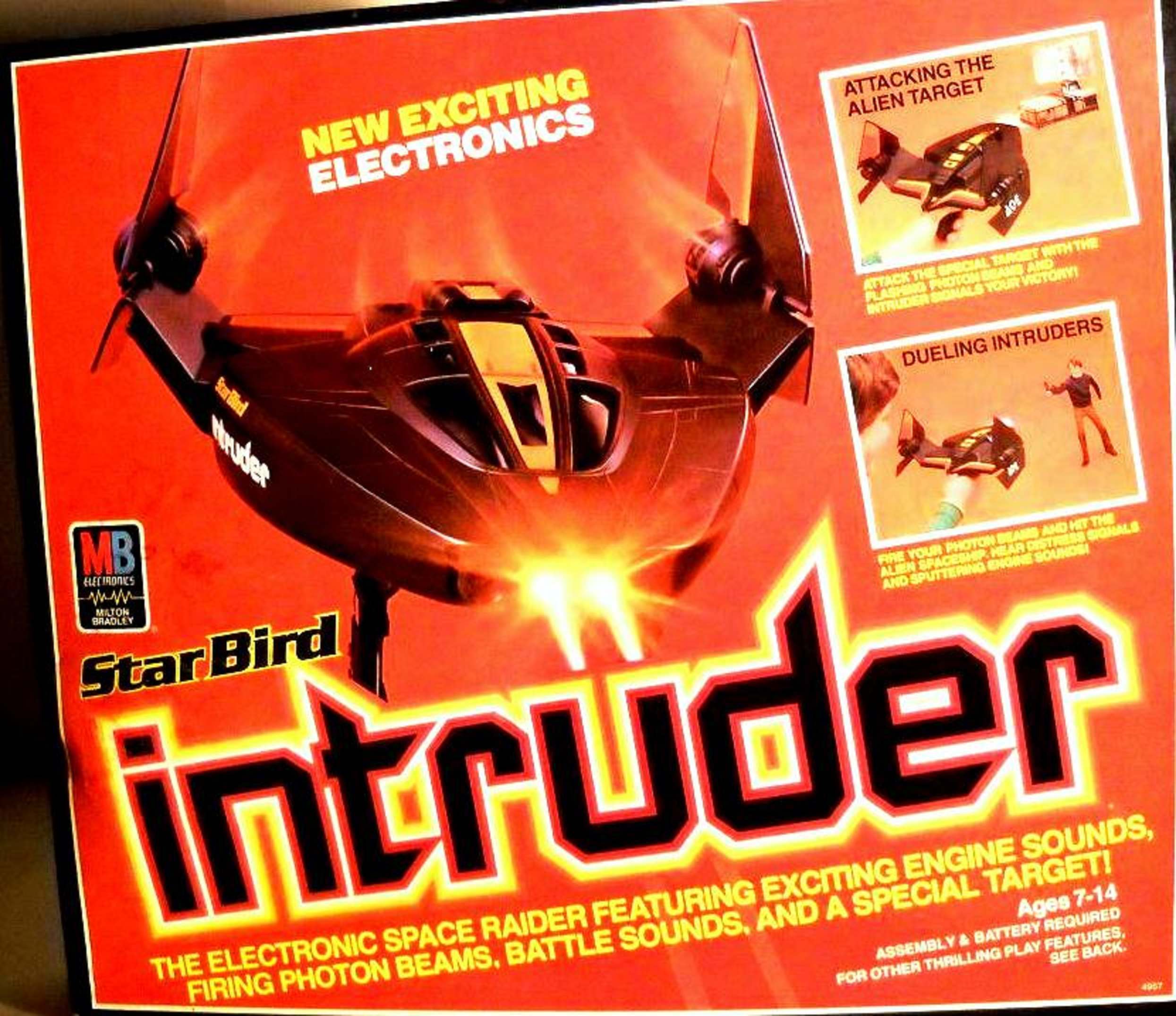 Equipped with new “exciting electronics,” this toy features a pistol grip for dogfights with the Star Bird Avenger but which takes away from the compact design and reality of the design a little.  One really terrific element, however, is the “skull” cockpit decal which suggests that the space raider is actually a pirate ship.

I love all these great disco decade spaceships and star bases, and they have a place of honor in my home office. 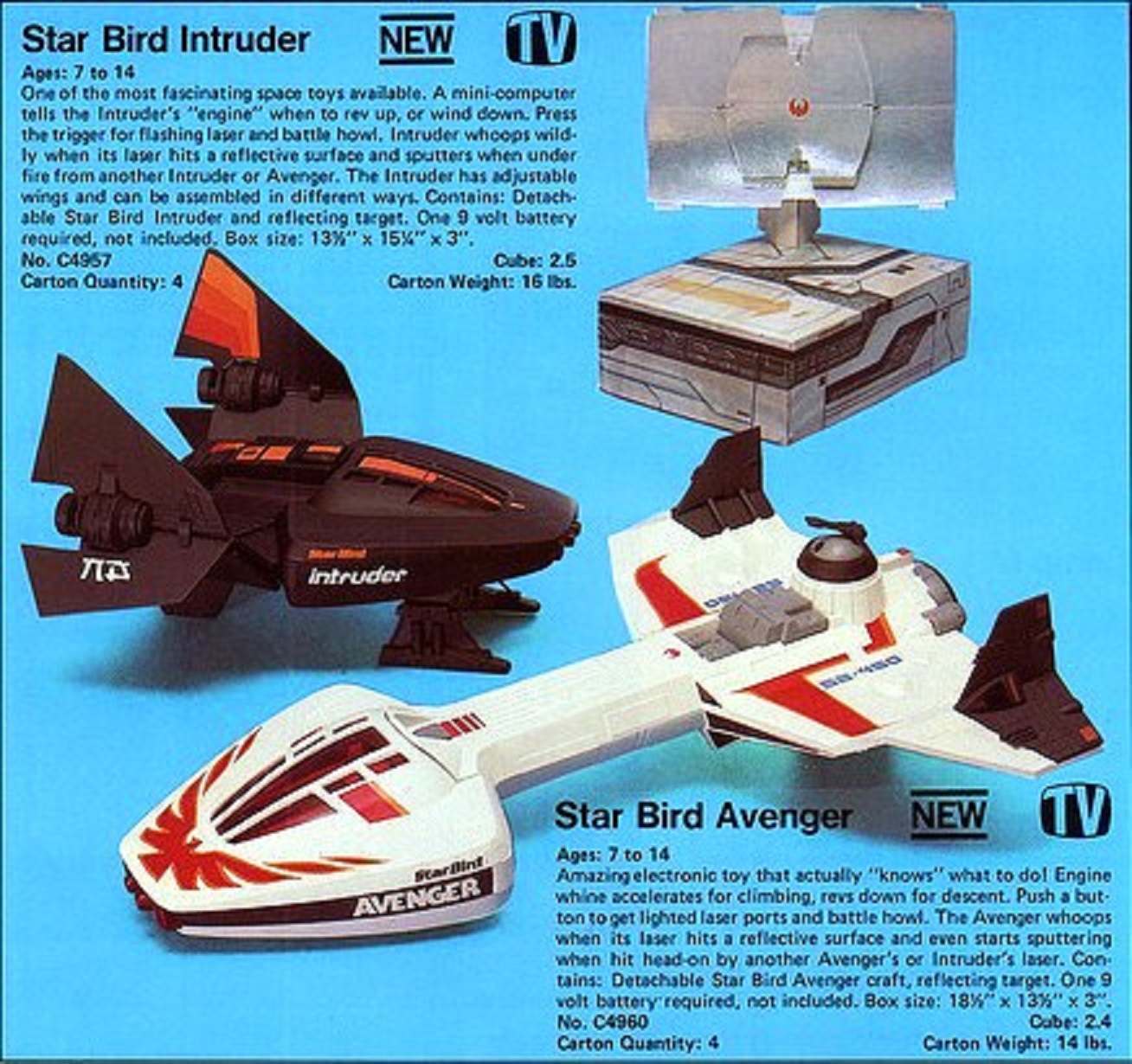