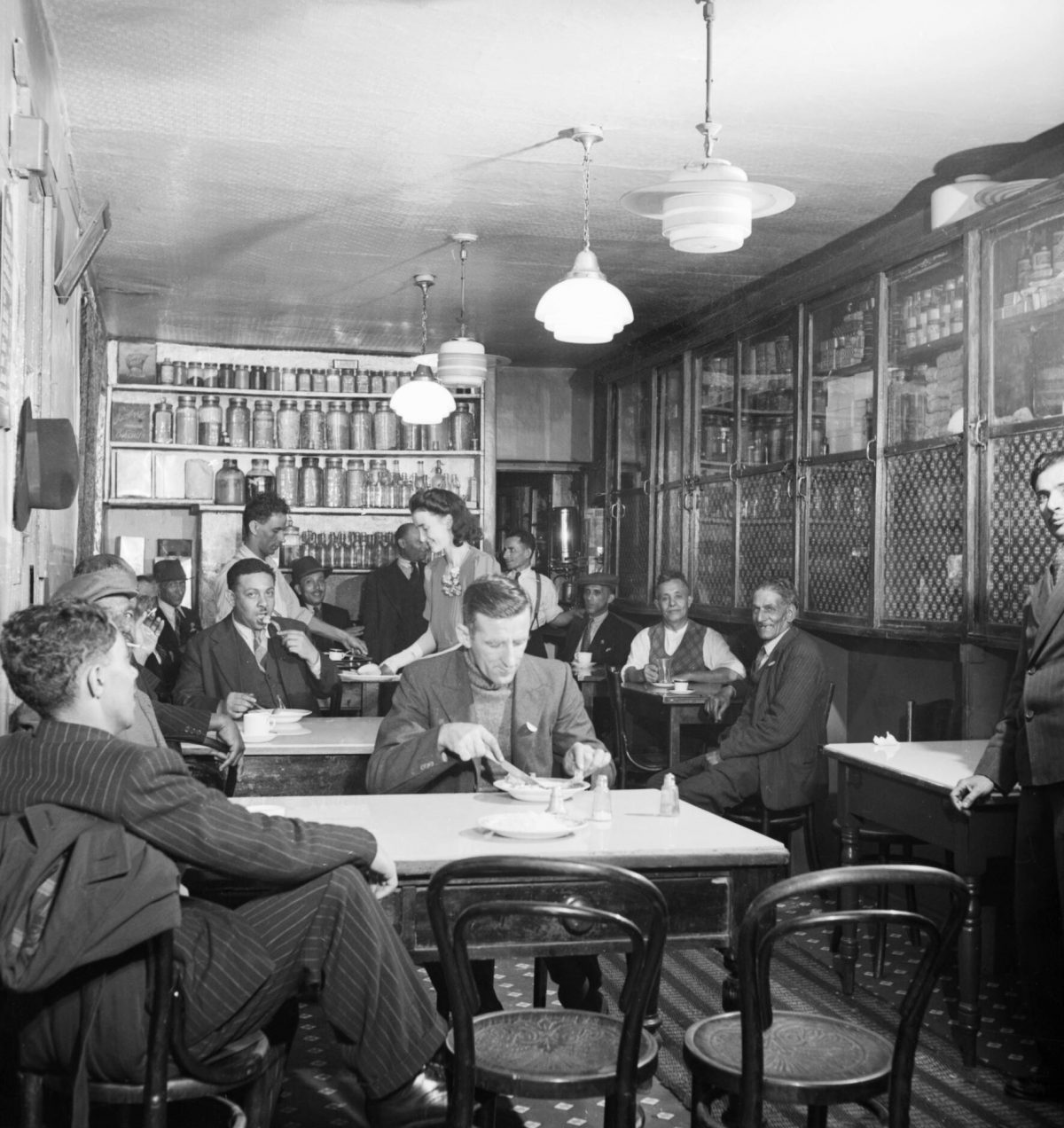 Butetown was originally an early housing estate built in the early 19th century by John Crichton-Stuart, 2nd Marquess of Bute, hence the name. The area, built to house workers for the new Cardiff Docks, is more commonly called “Tiger Bay” and one of the UK’s earliest multicultural communities with over 50 nationalities settled there by the First World War. In 1939 the Cardiff-born novelist Howard Spring, albeit in terms we would not use today, described Tiger Bay how he remembered it before WW1: “Chinks and Dagos, Lascars and Levantines, slippered about the faintly evil by-ways that ran off from Bute Street. The whole place was a warren of seamen’s boarding houses, dubious hotels, ships’ chandlers smelling of rope and tarpaulin…Children of the strangest colours, fruit of frightful misalliances, staggered half-naked about the streets; and the shop windows were decorated with names that were an epitome of all the clans and classes under the sun. The flags of all nations fluttered on the housefronts … It was a dirty, smelly, rotten and romantic district, an offence and an inspiration, and I loved it’.

Spring died in 1965 but not before he saw the original Victorian housing of Tiger Bay demolished including the historic Loudoun Square, the heart of Butetown. In its place came the typical sixties development including two high rise blocks of flats. These photographs were taken for the Ministry of Information by the photographer Richard Stone 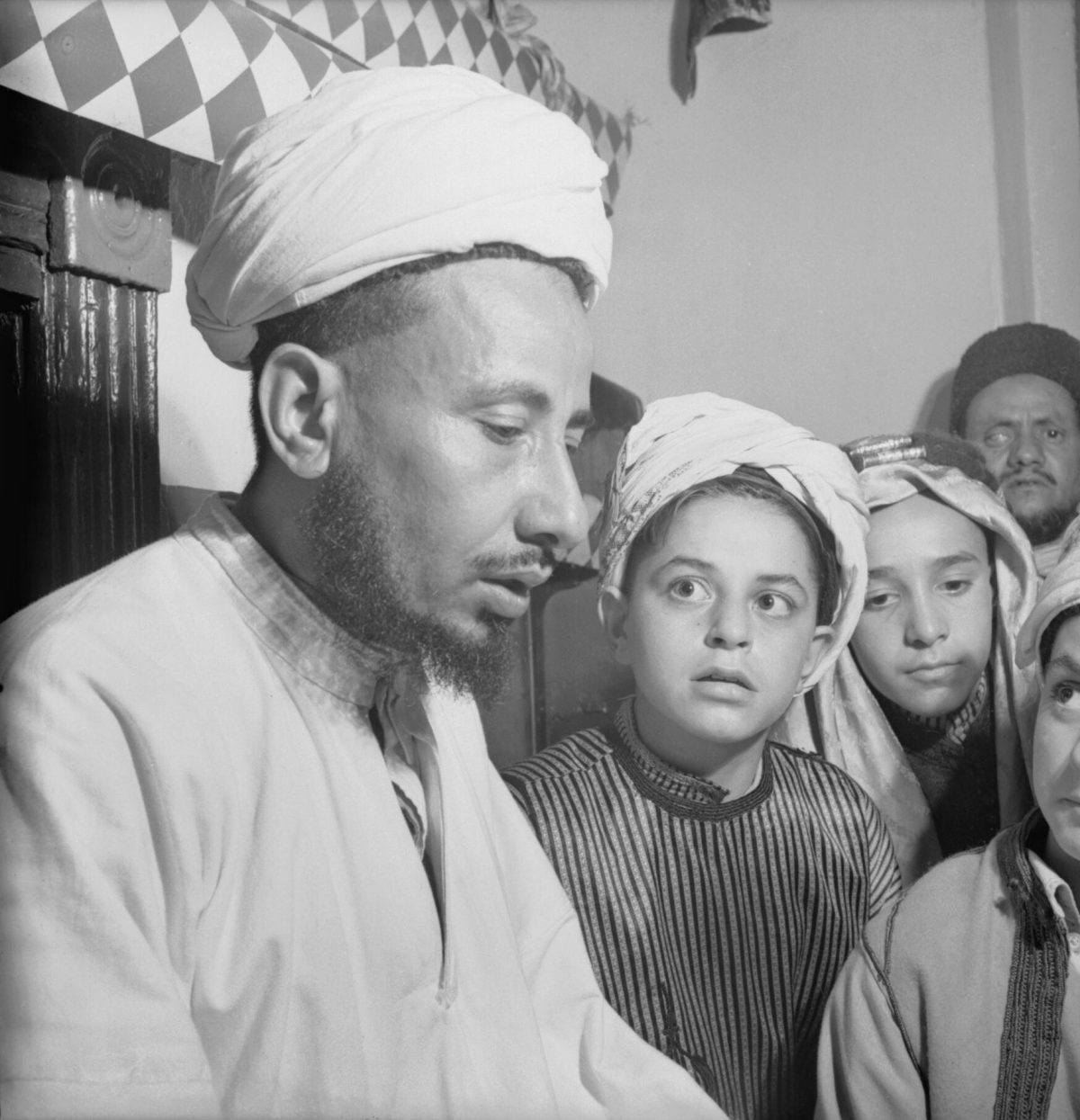 Kaid Shef recites passages from the Koran to a group of young boys in a room in the town’s old Mosque. According to the original caption, Kaid is a seamen, originally from Aden, who was torpedoed during the Norway campaign and spent 18 days on a raft, suffering terrible frostbite. He and one other man were the only survivors on the 38-strong crew. 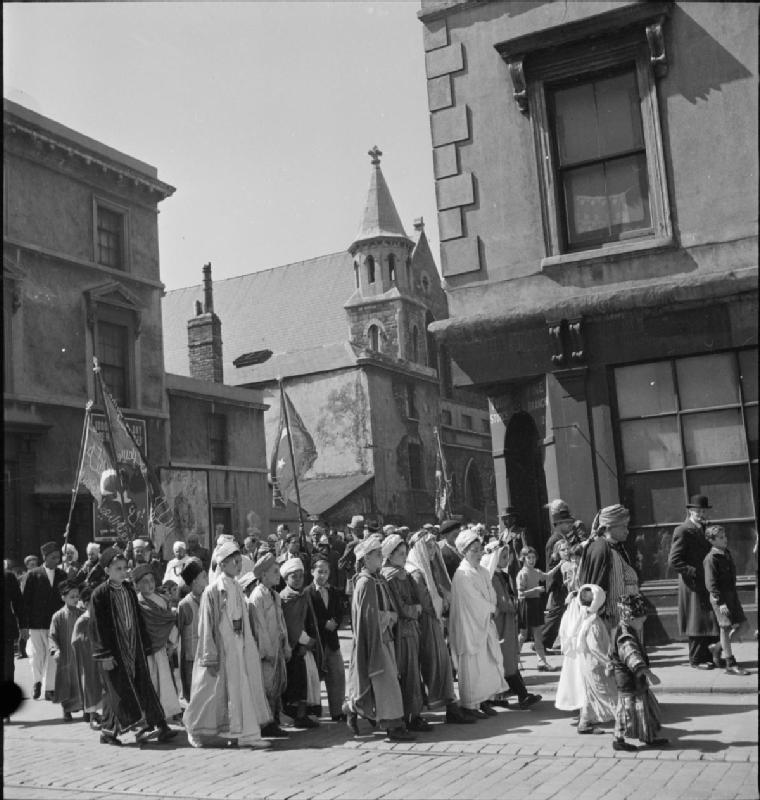 A procession in ornate dress and carrying flags and banners winds its way through Butetown to commemorate the opening of the new Mosque and Cultural Centre on Peel Street. Young boys have the honour of leading the procession through the sunny local streets to the Mosque. 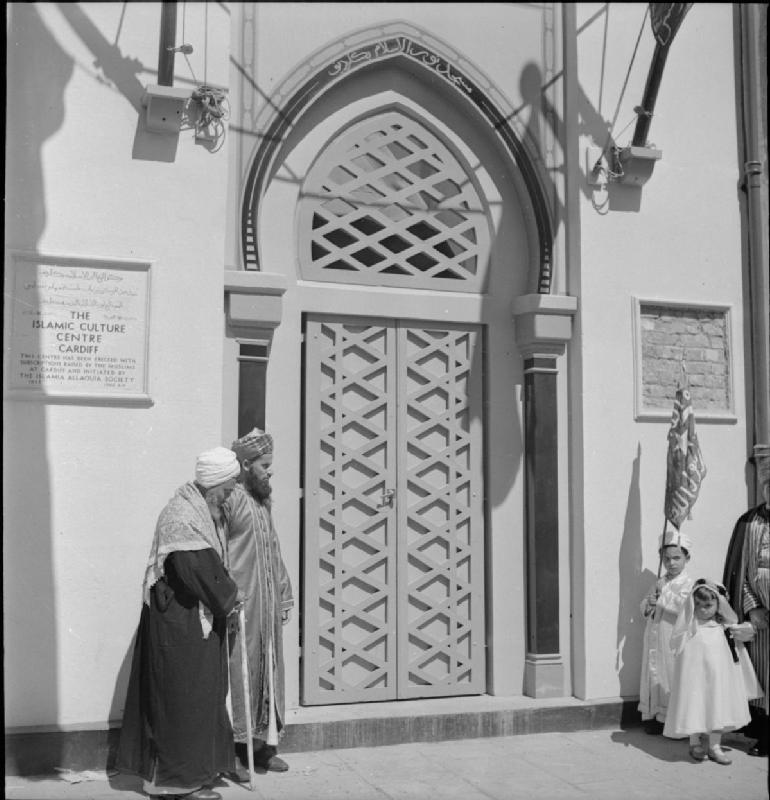 Muslim men and children listen to the Call to Prayer in the sunshine outside entrance of the newly opened Mosque and Cultural Centre on Peel Street in Butetown. The children are holding flags which they carried through the town during the procession to the Mosque to commemorate its opening. 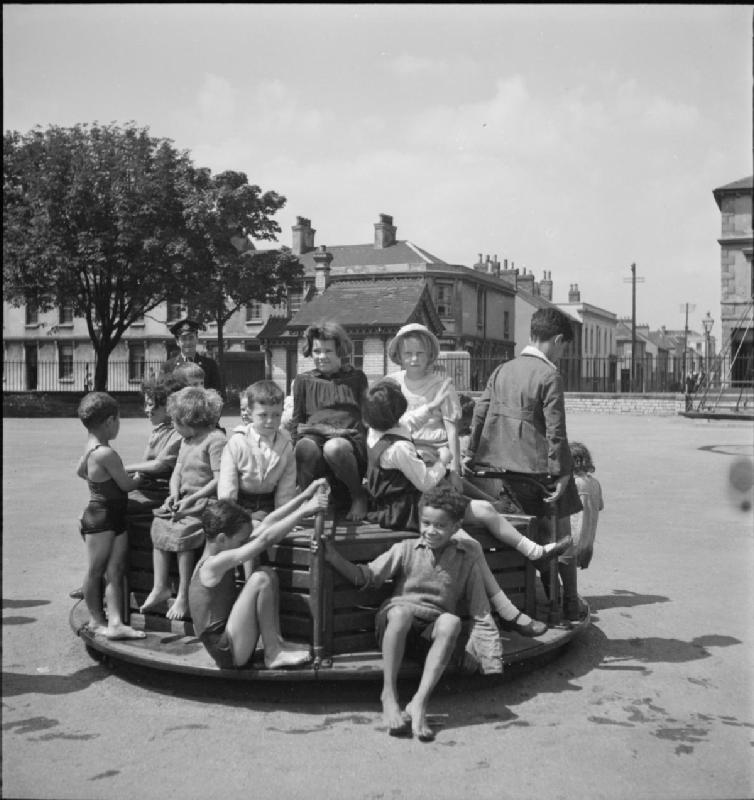 Children play on the roundabout in Butetown’s recreational square in the sunshine. According to the original caption, the square also includes chutes, swings and a large paddling pool. 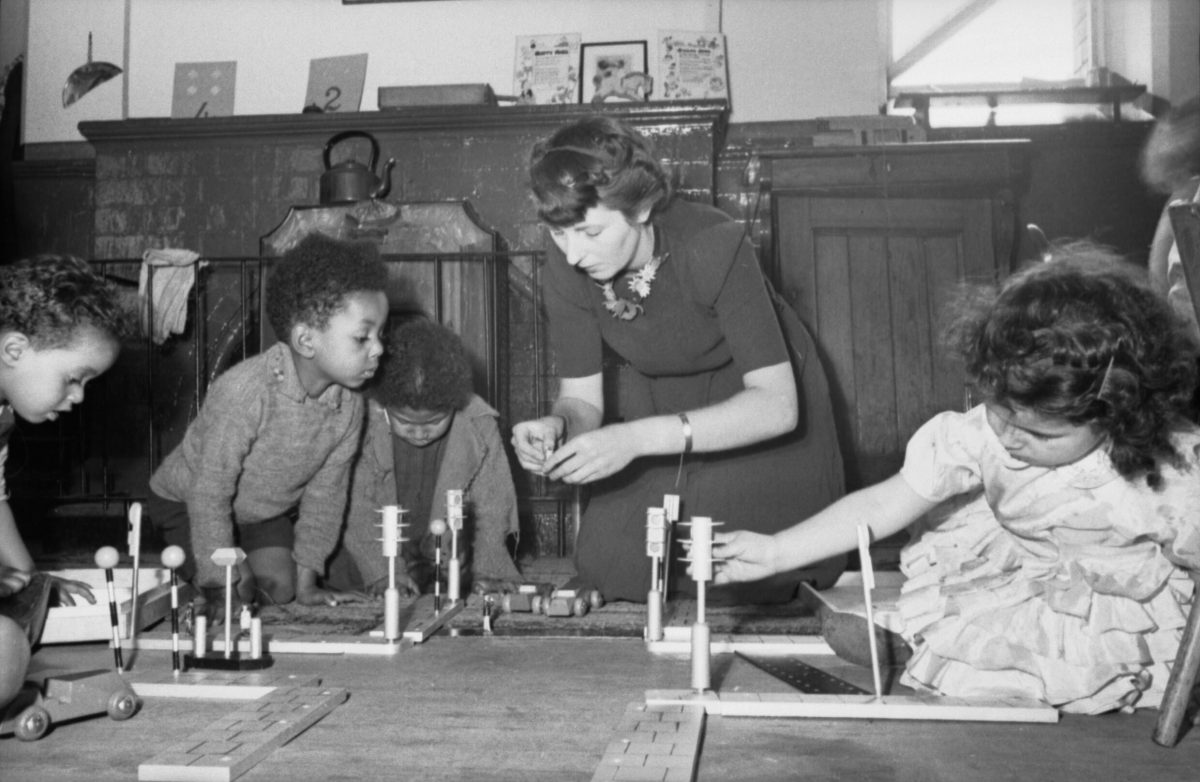 Infant children, assisted by their teacher, learn about traffic layouts and road safety with wooden models at the local school in Butetown. Other activities at the school include Montessori toys and a percussion band. 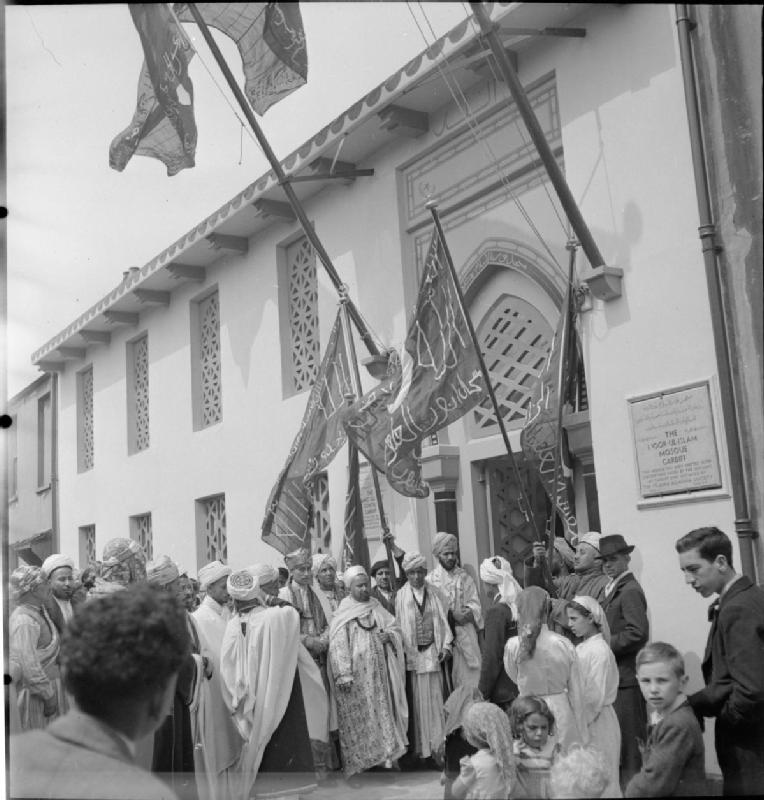 Sheikh Hassam Ismail (in the centre of the photograph wearing a long patterned robe), the Imam of the Cardiff Mosque, prepares to enter the new Mosque, accompanied by one of the leaders of the Islamia Allaouia Religious Society, who have co-funded the building of the Mosque. They are surrounded by many other people who have formed part of the ceremonial procession to commemorate the opening of the Mosque, many of whom are holding large flags featuring Arabic writing. 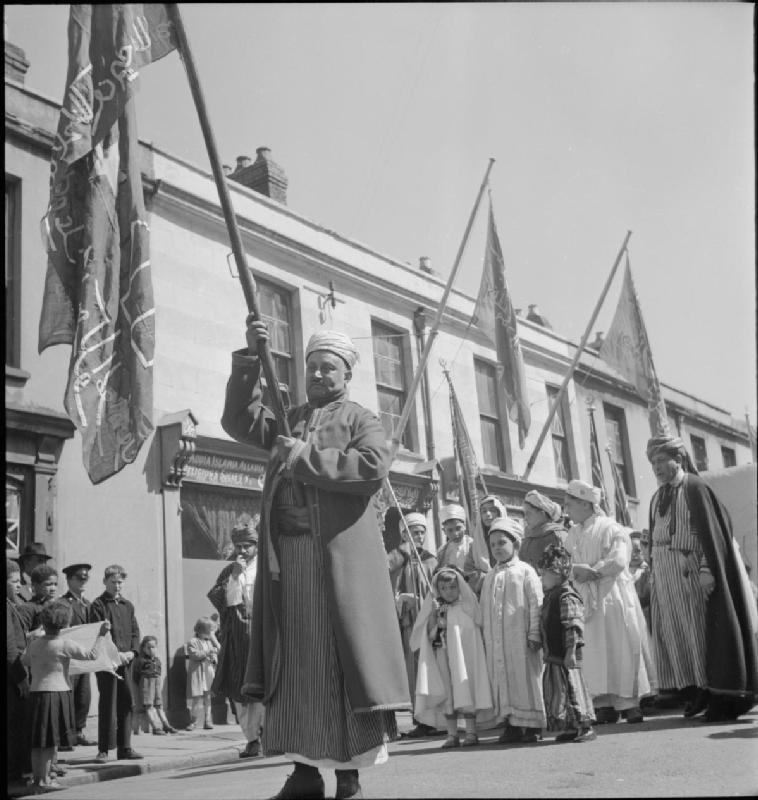 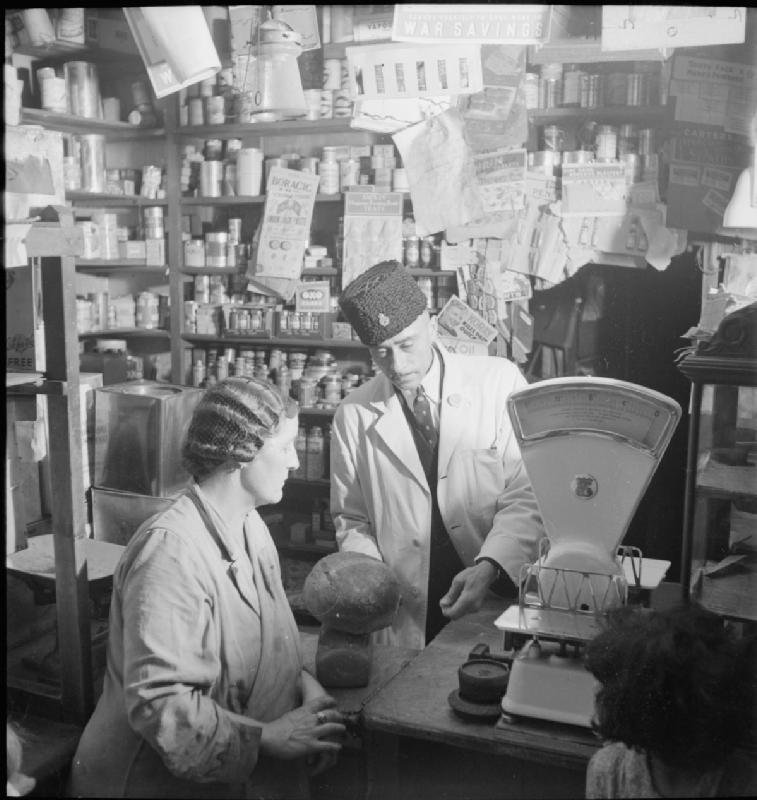 A view inside Kaid Sala’s grocer’s shop in Butetown, showing Mr Sala as he serves Mrs Farragia at the counter. Mrs Farragia, who is Welsh and married to a Maltese man, is buying two loaves of bread.

A view of the busy interior of ‘The Cairo’, a popular cafe in Cardiff, well-known by Britain’s Muslims. It is run by Ali Salaman, just visible in the doorway in the background, and his wife, seen here serving at table in the centre of the photograph. In the foreground, amongst those enjoying a meal in the cafe, is a Merchant Seaman from New Zealand. 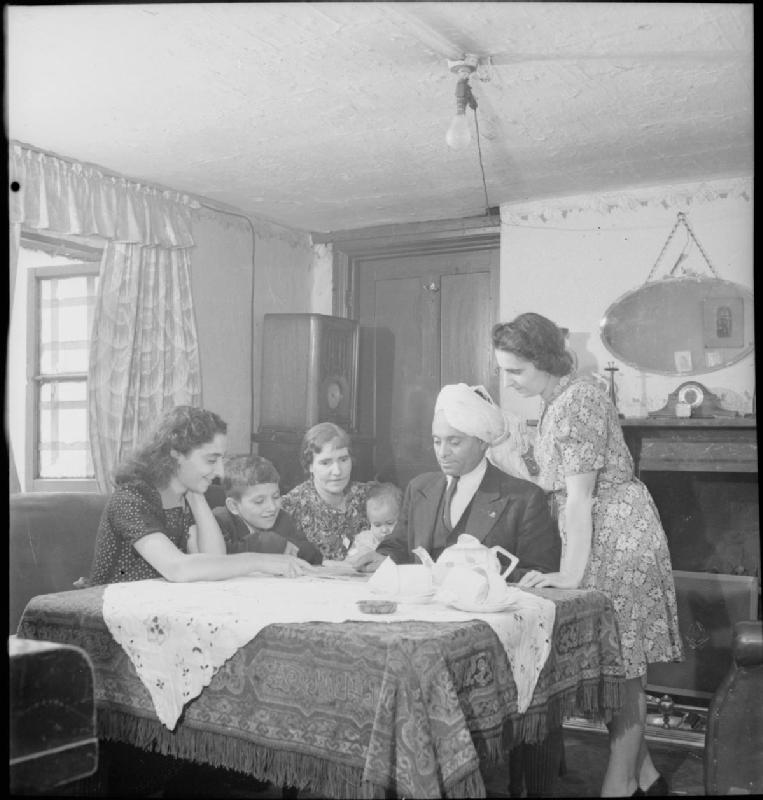 Visitors to Butetown for the opening of the new Mosque enjoy a meal at ‘The Cairo’ cafe. Left to right, they are: Abdul Aziz, from Calcutta, who runs a cafe in South Shields, Mrs Aziz and their daughter Joynob, Mrs Annie Nian, with her son Kenneth and Azin Ulla, a seaman from Bengal. 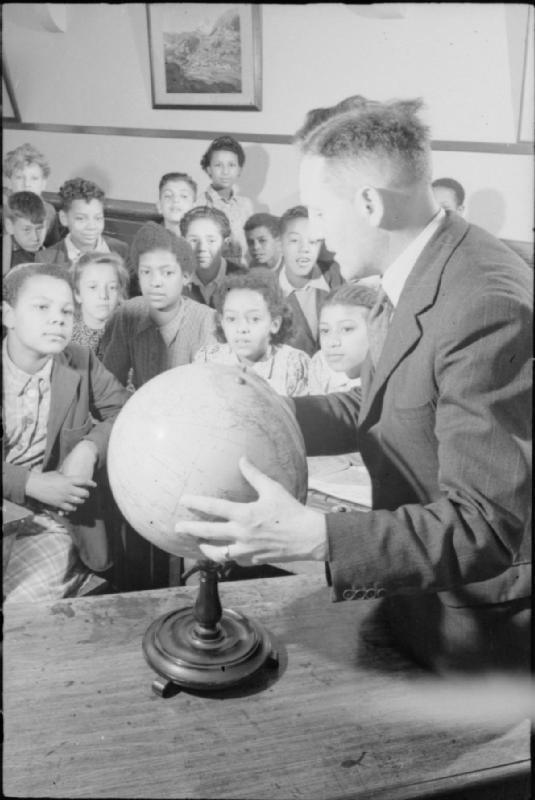 Geography teacher Mr Dudley explains a point to the class with the aid of a globe during a lesson at South Church Street School in Cardiff. 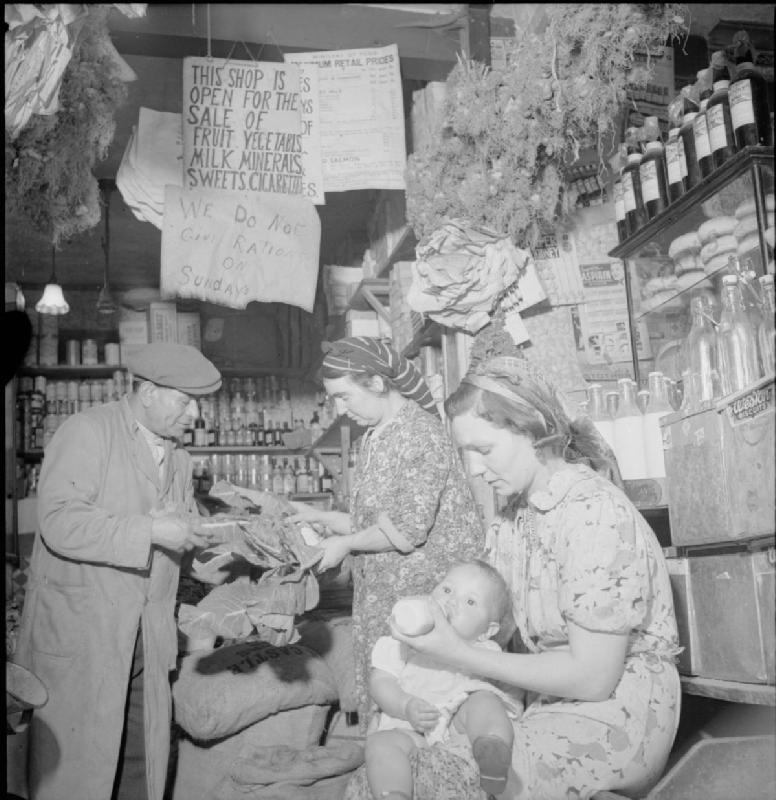 A view inside the well-stocked general store in Butetown, run by Mr and Mrs Thabeth. According to the original caption, ‘they sell everything from cabbages to candles’. In the foreground can be seen Mrs Hassan feeding her baby son, Hamed. Various bottles and packages line the shelves of the shop. Also visible are signs above the counter which read: “This shop is open for the sale of fruit, vegetables, milk, minerals, sweets, cigarettes” and “We do not give rations on Sundays”. 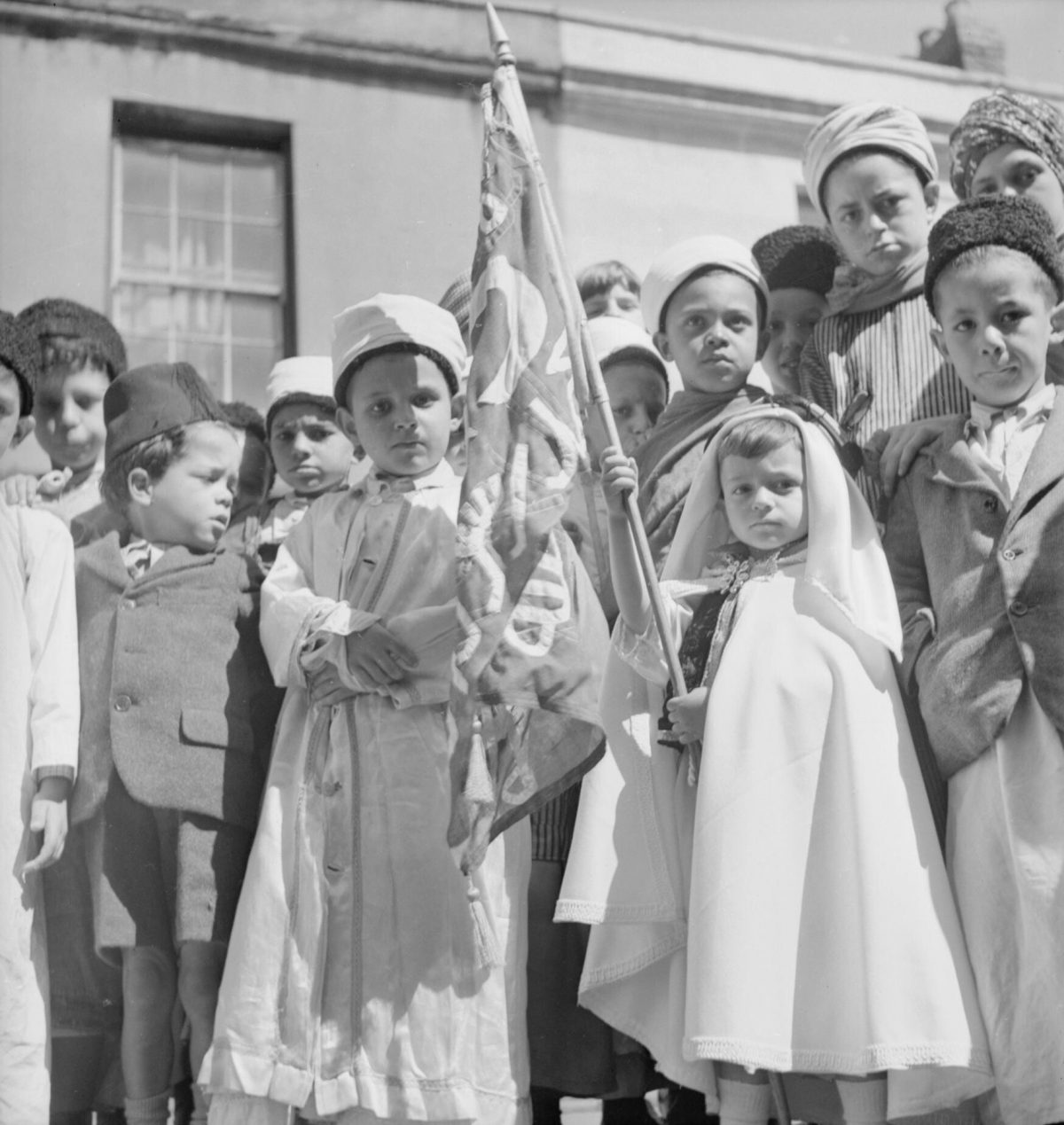 A group of young Muslim boys who will have the honour of leading the procession through the town to the commemorate the opening of the new Mosque, wait with their banner for the parade to begin. 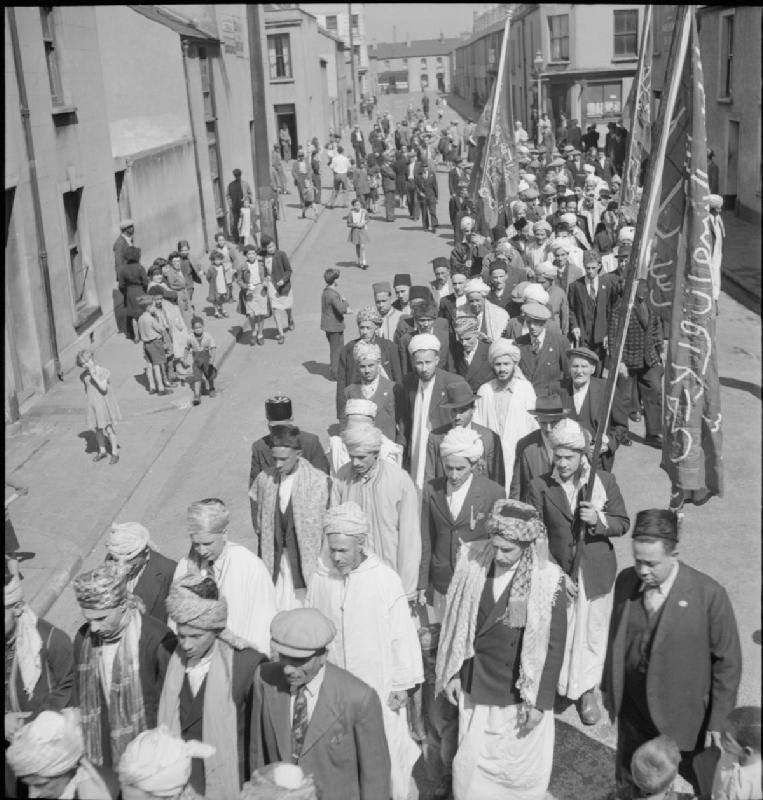 A procession of Muslims carrying large banners winds its way through Butetown towards the new Mosque which opening today on Peel Street. Children can be seen watching the parade as it passes by. 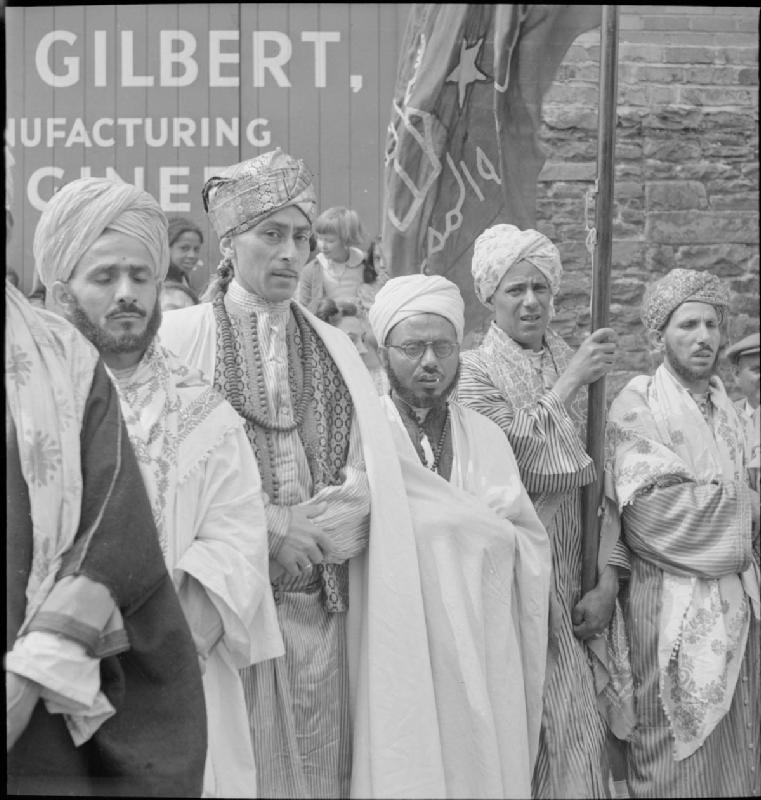 Local Muslims in Butetown, Cardiff, stand outside the new Mosque on Peel Street, wearing ornate costume. One holds a banner, which he has carried during the procession to commemorate the opening of the new Mosque. Second from left is Kaid Sala, the local grocer. 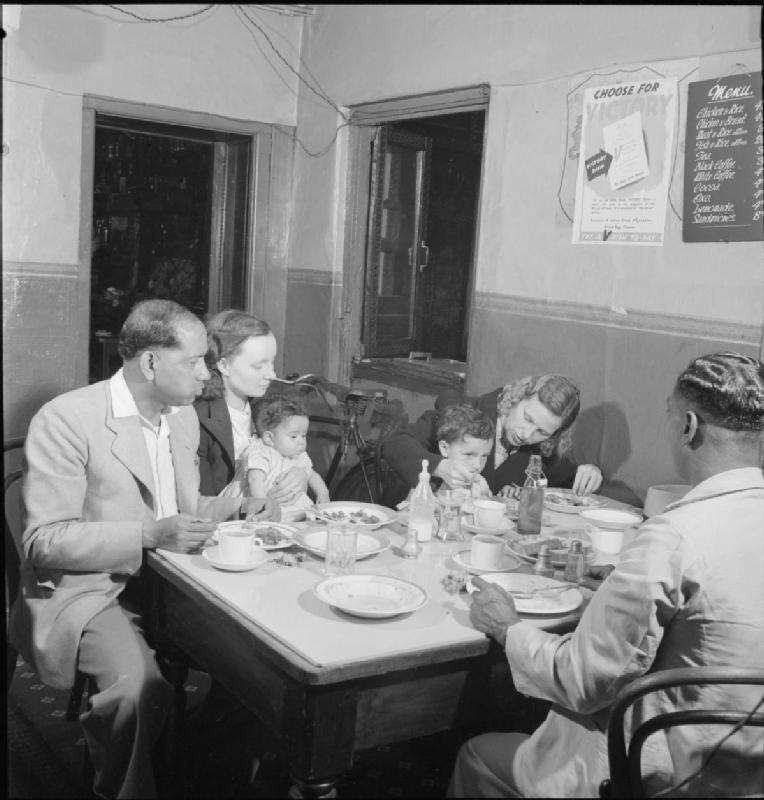 Visitors to Butetown for the opening of the new Mosque enjoy a meal at ‘The Cairo’ cafe. Left to right, they are: Abdul Aziz, from Calcutta, who runs a cafe in South Shields, Mrs Aziz and their daughter Joynob, Mrs Annie Nian, with her son Kenneth and Azin Ulla, a seaman from Bengal.

Infant children, assisted by their teacher, learn about traffic layouts and road safety with wooden models at the local school in Butetown. Other activities at the school include Montessori toys and a percussion band. 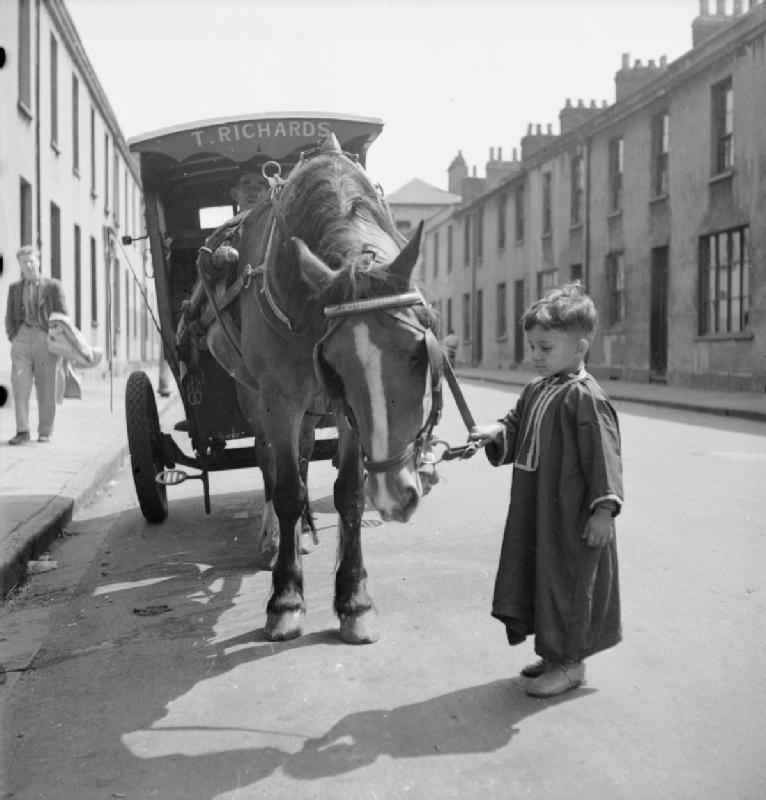 A young Muslim boy named Hassan holds on to the reins as he says hello to the local baker’s horse on a terraced street in Butetown. The horse is linked to the baker’s cart, which features the name of the baker, T Richards. 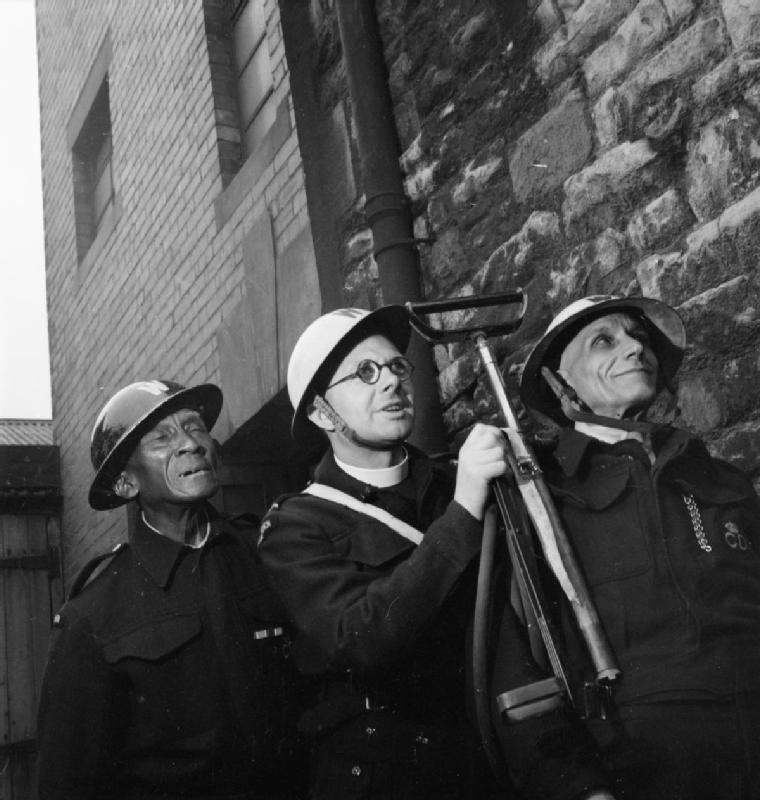 Members of Butetown’s ‘International Warden’s Post’ at work. Left to right, they are: Edward Bovell from Barbados; Reverend Edward Avery (Chief Warden, holding a stirrup pump) of the Methodist Colonial Mission (he had previously been a missionary in Sierra Leone); and Miope Nagi from Aden. According to the original caption, this Air Raid Warden’s Post had been visited by the King and has members of more than twenty different nationalities: “The Post has a reputation, unexcelled by any, for promptness, courage and devotion to duty gained in a district that has suffered heavily in Cardiff’s worst blitzes”. 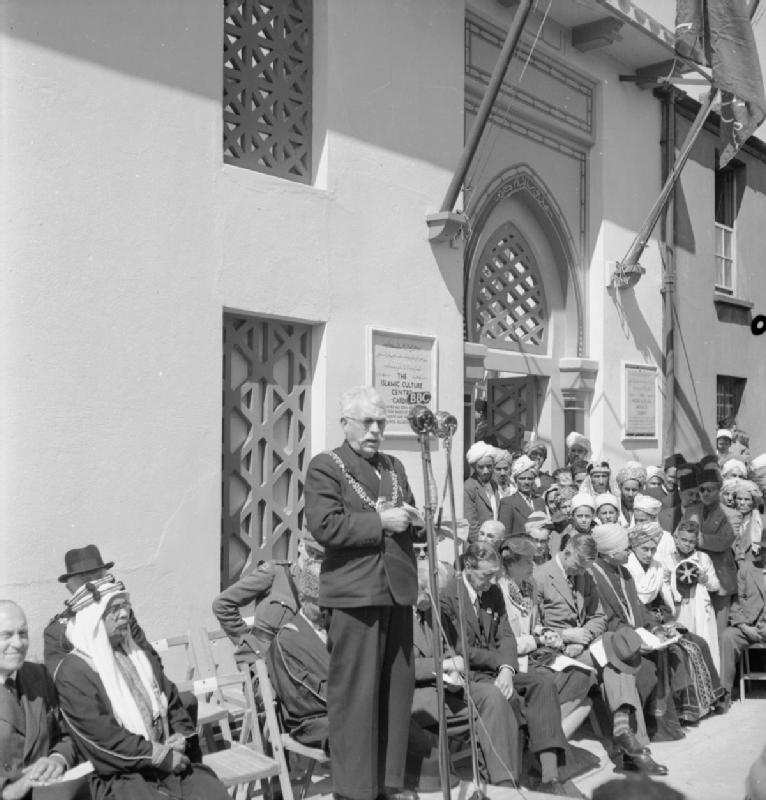 The Lord Mayor of Cardiff, Councillor James Griffiths, addresses the audience gathered in the sunshine outside the new Mosque on Peel Street during the civil opening ceremony. Various dignitaries can be seen gathered beside him around the main entrance to the Mosque, including His Excellency Sheikh Hafiz Wahba, Minister for Saudi Arabia. Two plaques, one on either side of the door, state that the Noor Ul Islam Mosque and associated Islamic Cultural Centre have been erected with subscriptions raised by the Muslims at Cardiff and initiated by the Islamia Allaouia Society. 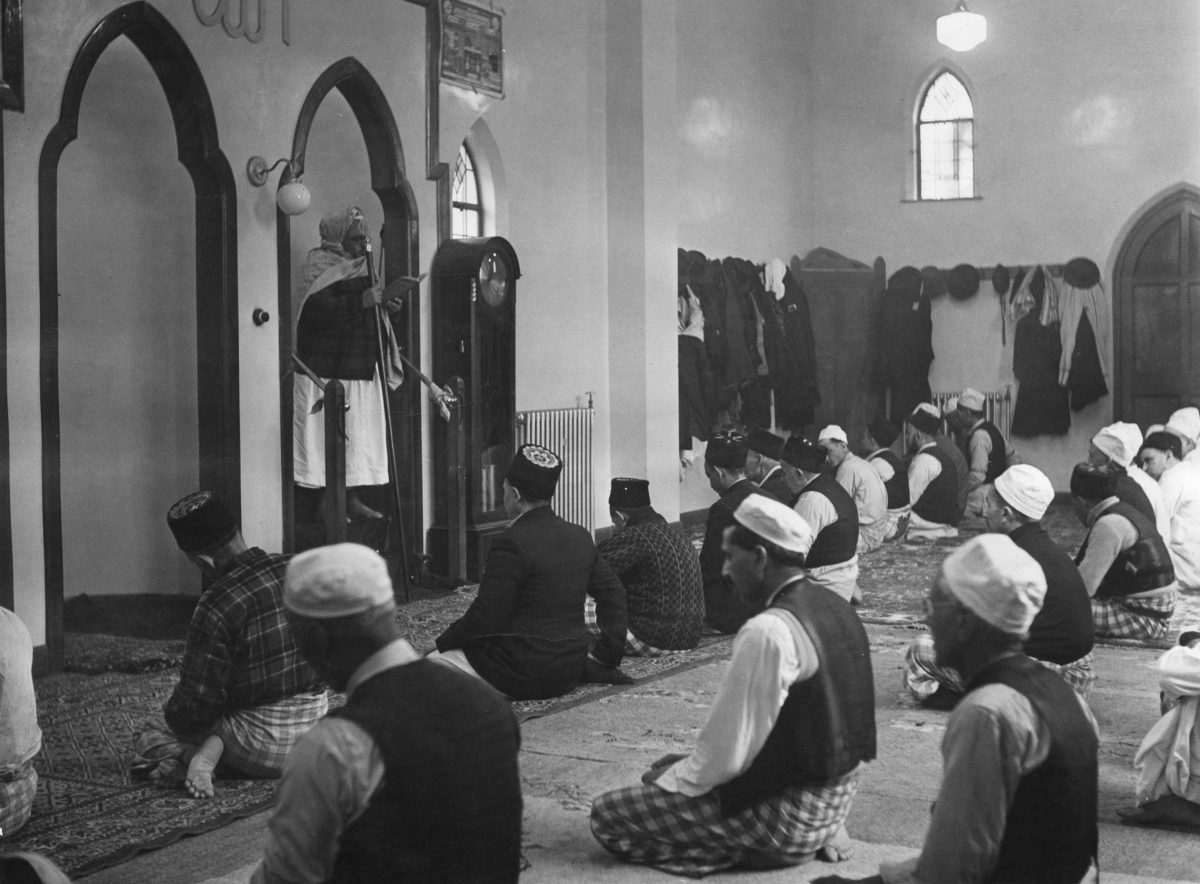 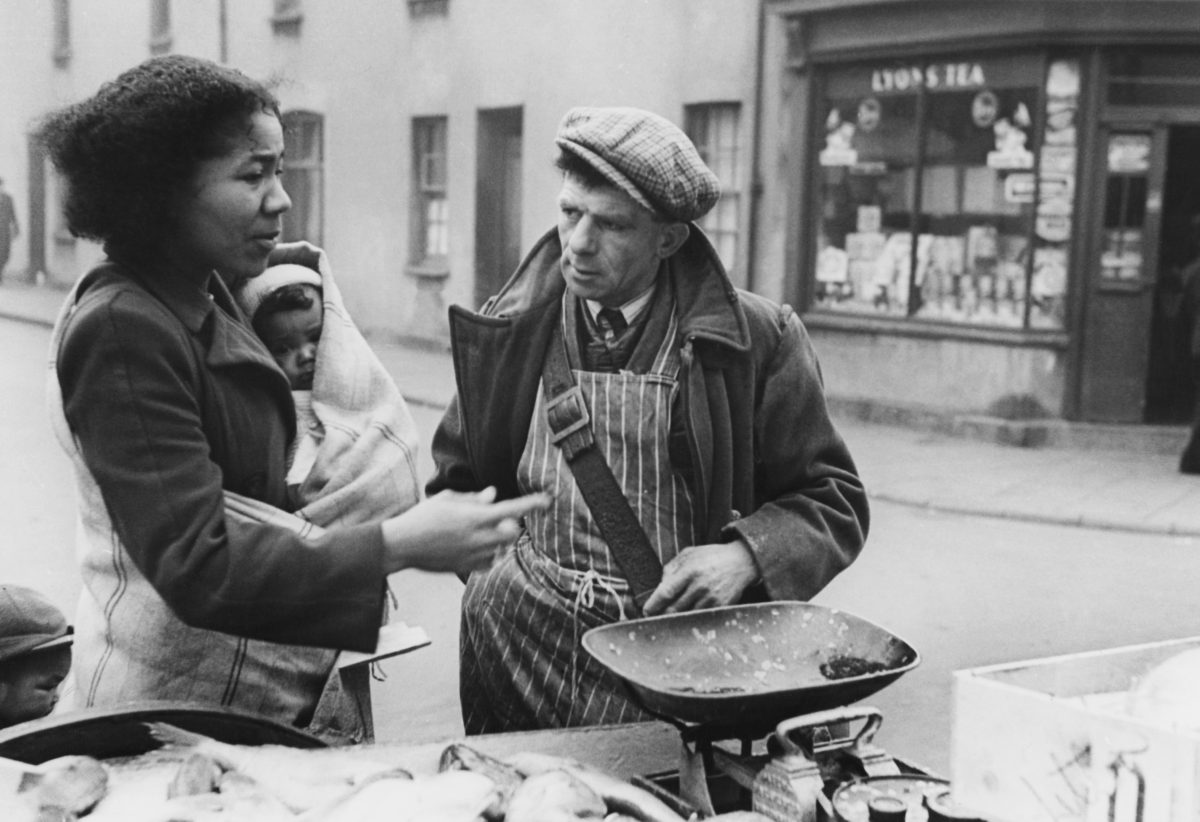 The multicultural community of Butetown or Tiger Bay in Cardiff, Wales, 1950. (Photo by Bert Hardy)