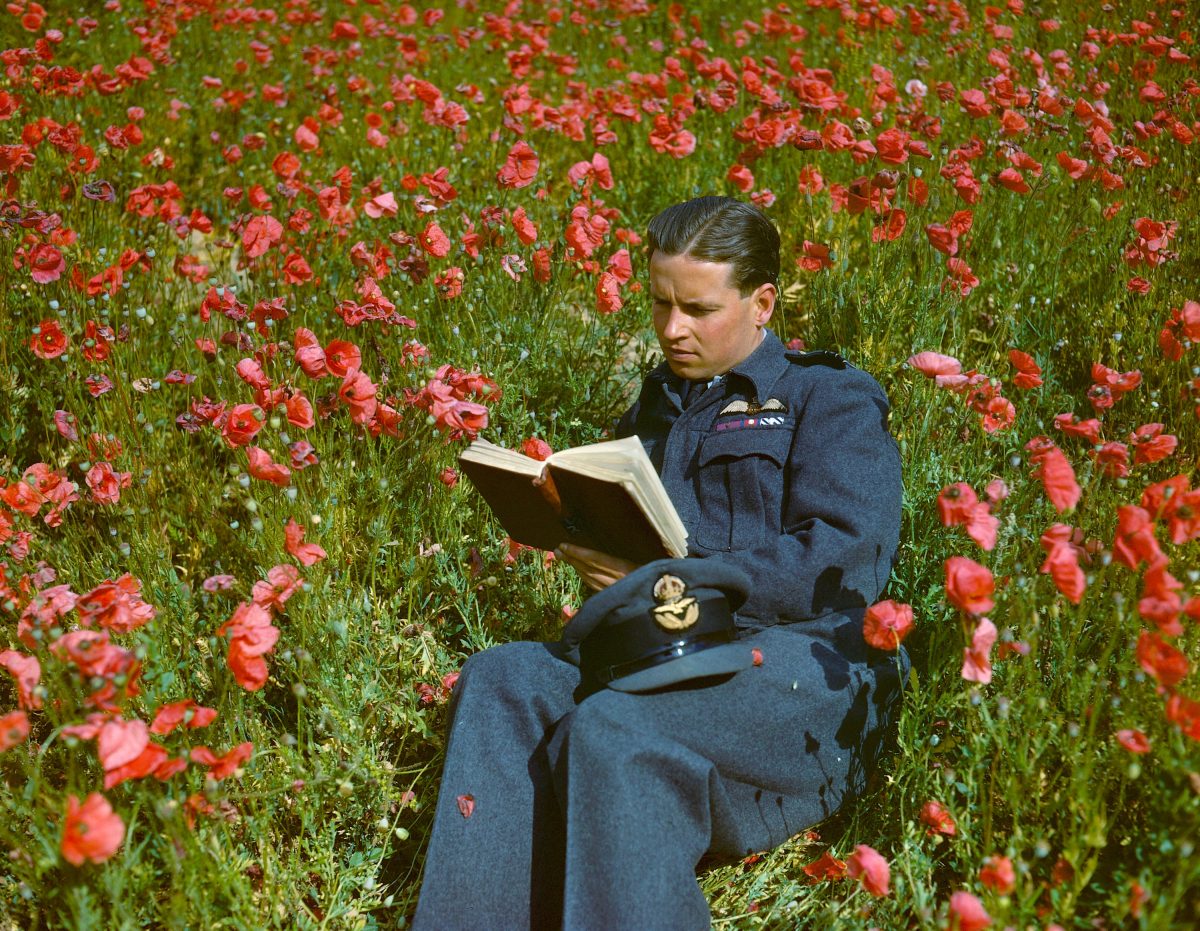 When the 26 year old Guy Gibson appeared on Desert Island Discs on 19 February 1944 Roy Plomley opened the programme with a brief history of his extraordinary career:

As soon as he left school he joined the Royal Air Force and became a bomber pilot. He made his first bombing mission over the Kiel Canal the day after war was declared. During the Battle of Britain he was transferred to a fighter squadron, where he was credited with four certainties [that is , four German bombers definitely destroyed] and two probables. He was transferred back again to bombers in January 1942. He has carried out 174 missions over enemy territory, including five trips to Berlin. In May last year he led a picked force of Lancasters in that very gallant and successful raid on the Mohne Dam. He is the most highly decorated man in the British Empire. He is Wing Commander Guy Gibson, VC, DSO and Bar, DFC and Two Bars.

Guy Gibson’s eighth record was Wagner, ‘The Ride of the Valkeyries’: “It’s exciting, it’s grandiose, it’s – rather terrible. It reminds me of a bombing raid, though I don’t say it’s like one’. And then Roy Plomley ended the programme with, ‘Good luck, happy landings and thank you.’

Exactly seven months later on 19th September 1944 Guy Gibson died when his Mosquito he was piloting crashed at Steenburgen in the Netherlands at around 22.30pm. Witnesses heard a plane flying low, saw it was lit up and then it crashed. It wasn’t posted that he was officially missing until 29 November, ten days later. 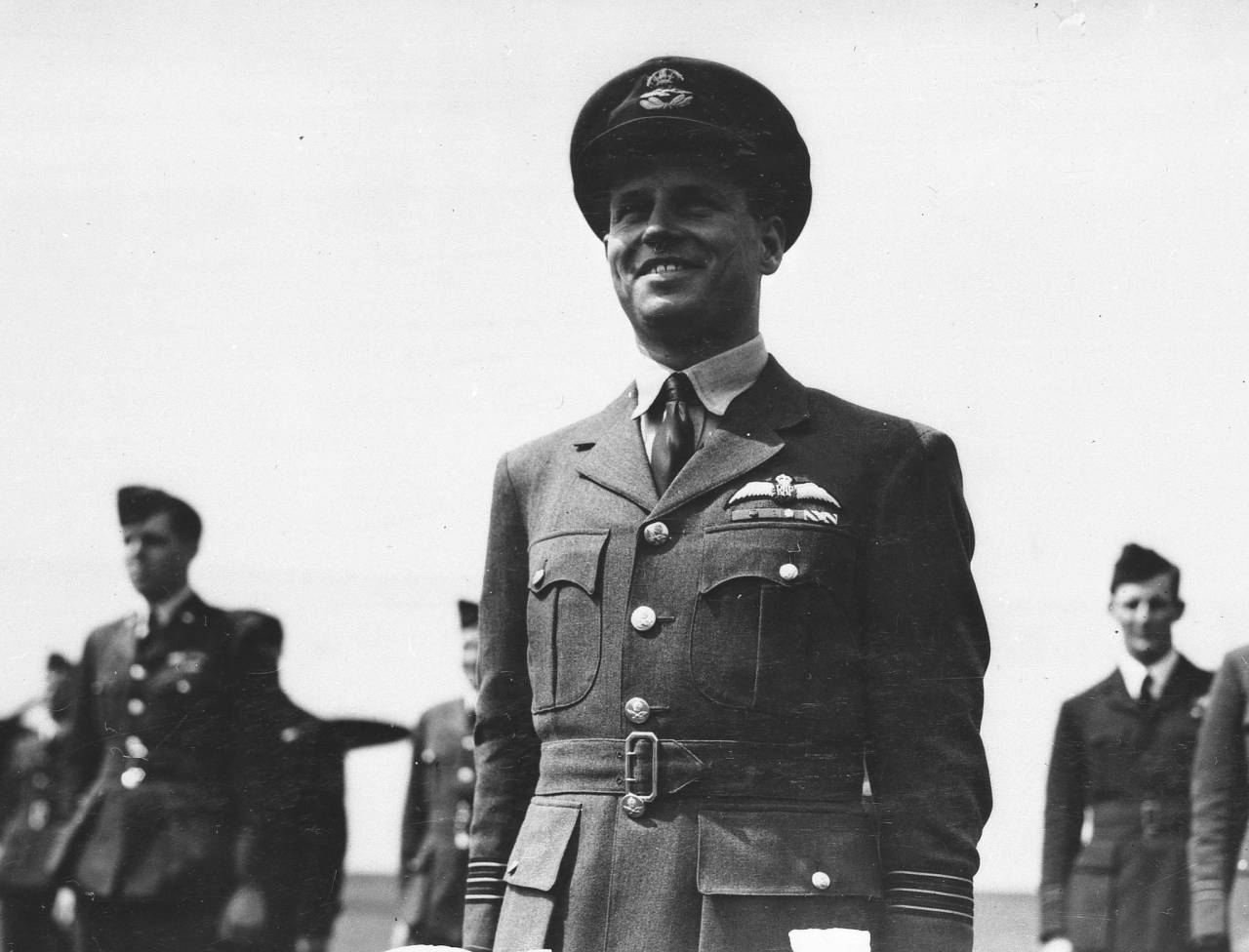 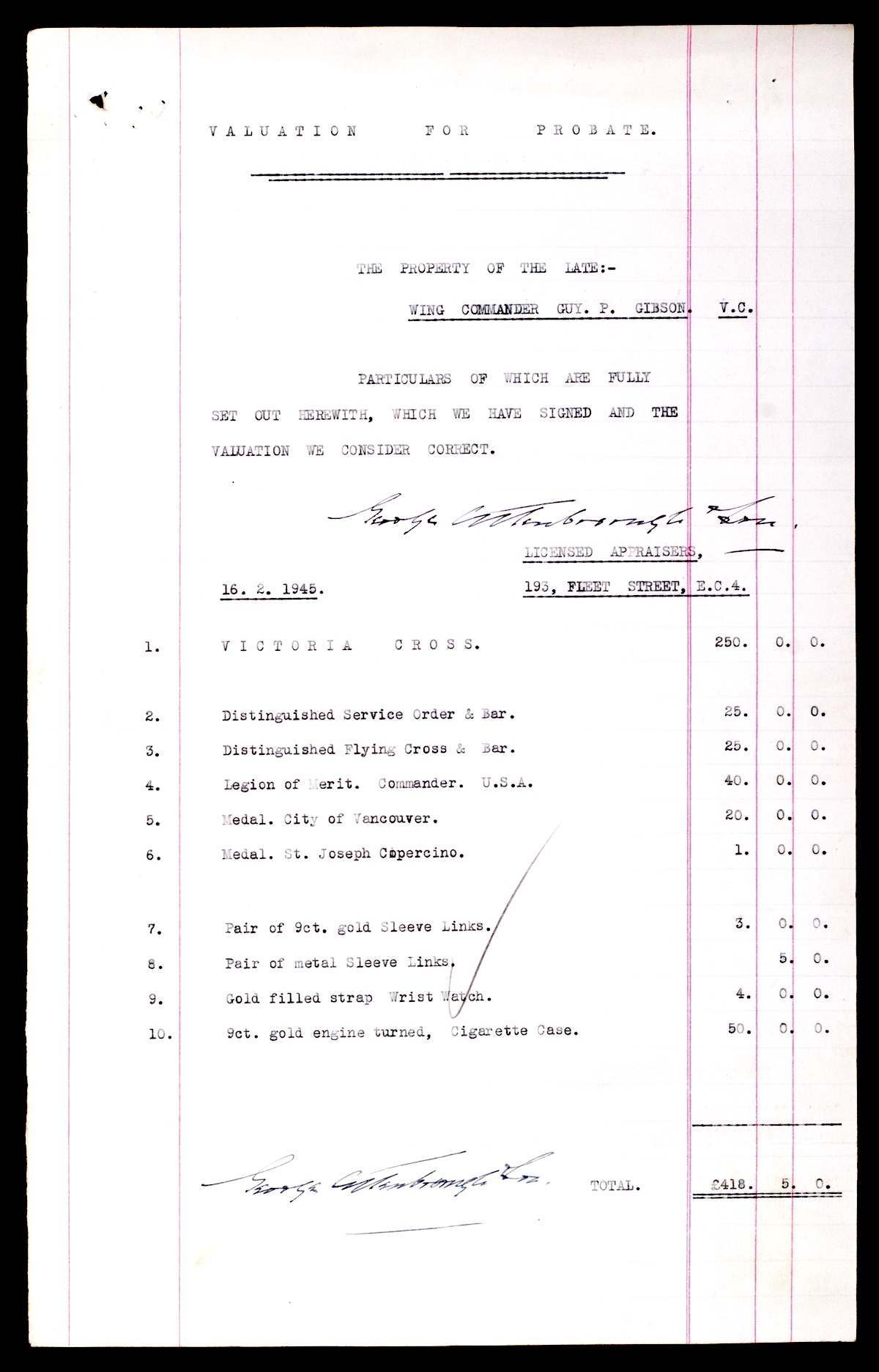 Guy Gibson led the Dambusters raid during the Second World War. This document lists his personal effects and their valuation at the time of his death. This includes his Victoria Cross (valued at £250) as well as five other medals, and a gold inscribed cigarette case given to him as a memento of the successful raid. Date: 16 February 1945 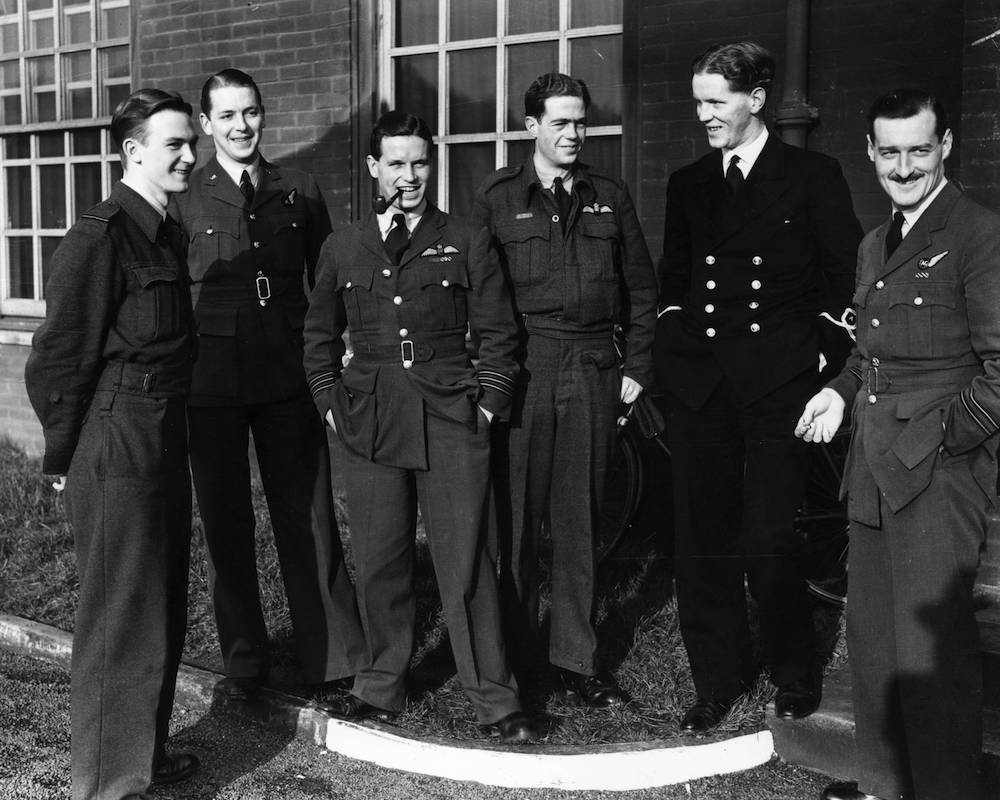 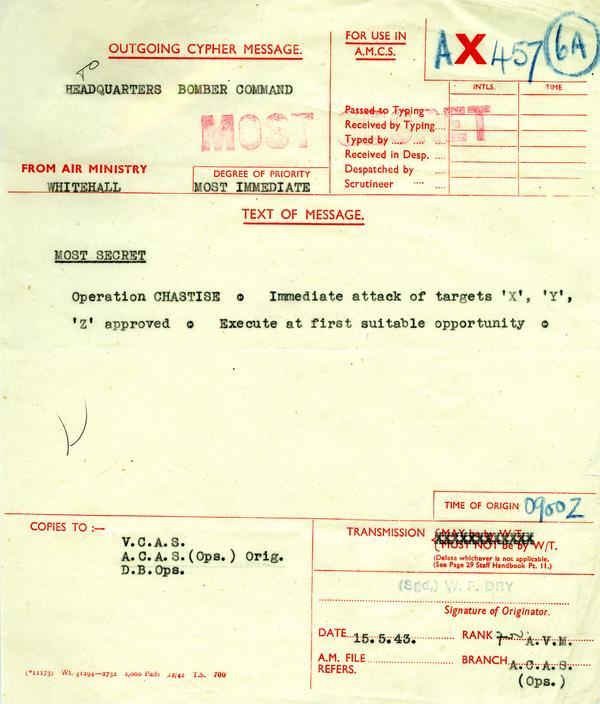 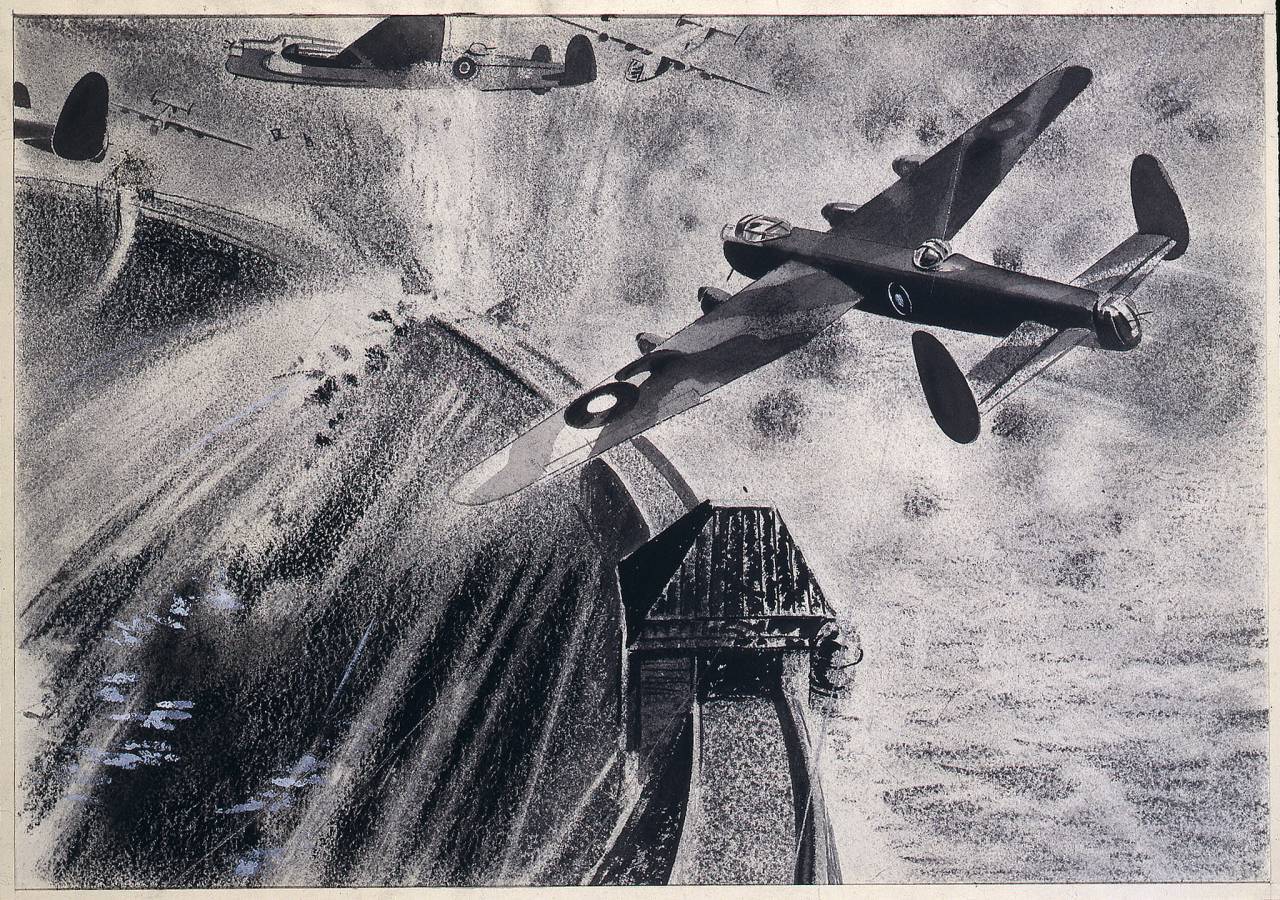 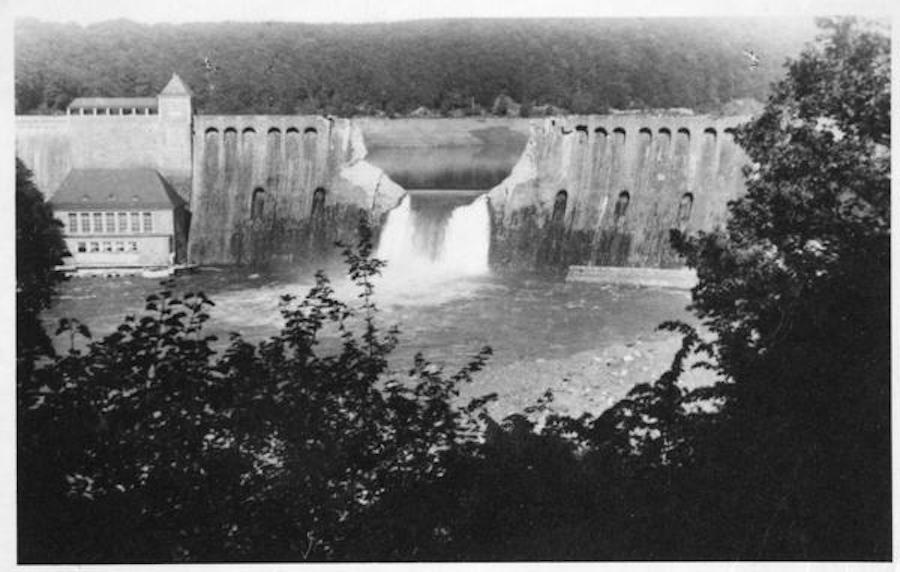 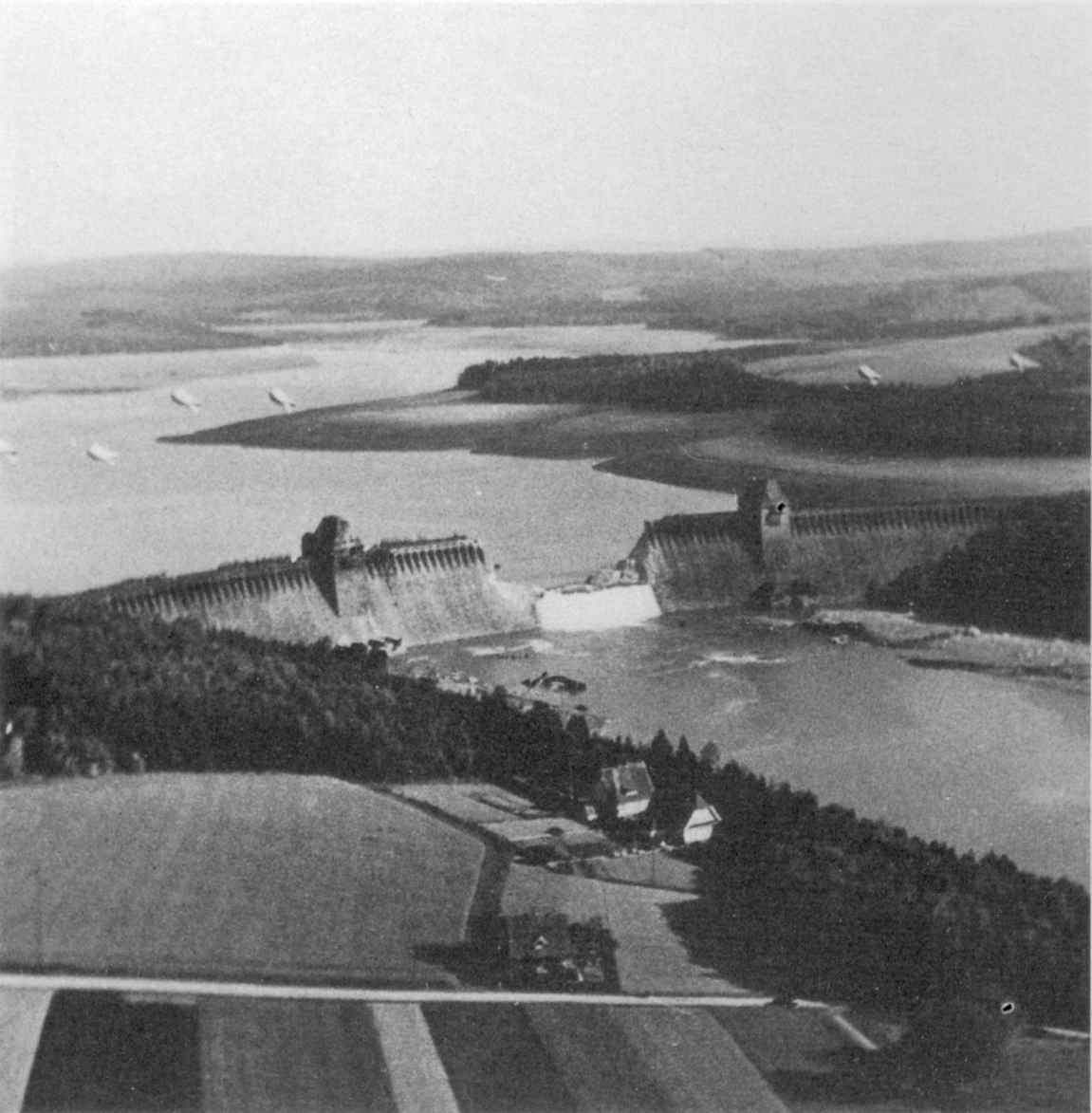 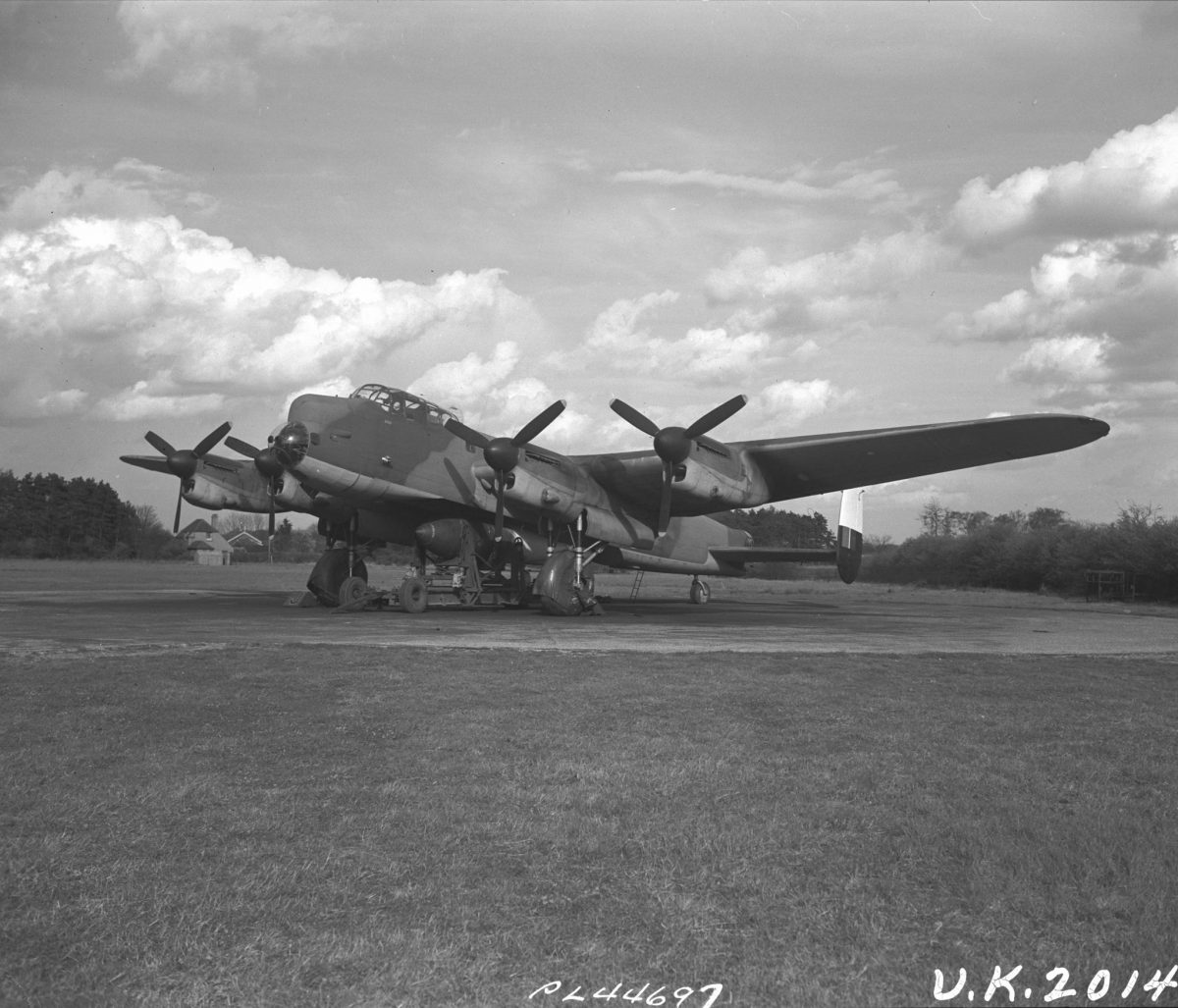 Lancaster aircraft on ground from 617 SQN. 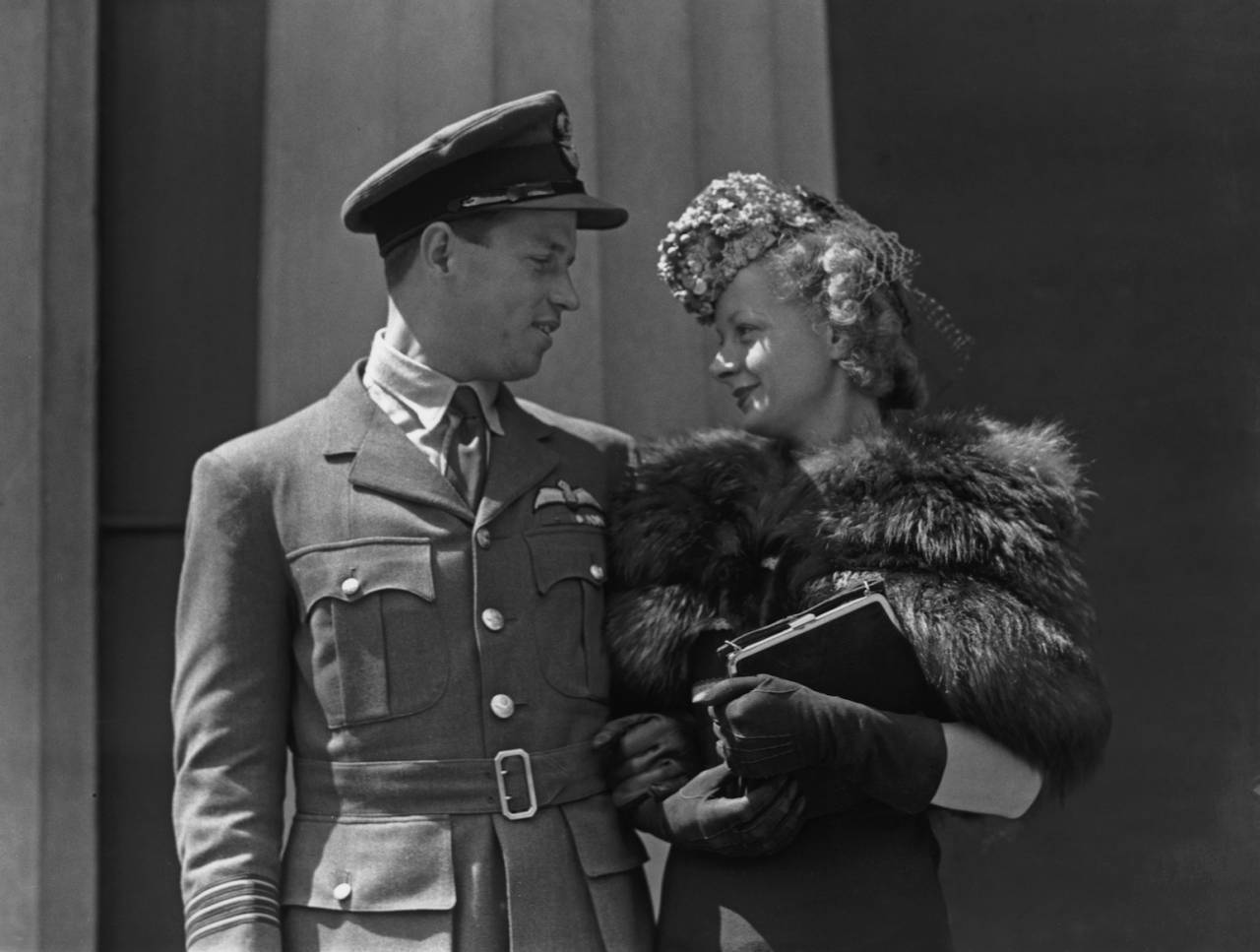 The KING has been graciously pleased to confer the VICTORIA CROSS on the undermentioned officer in recognition of most conspicuous bravery: —

This officer served as a night bomber pilot at the beginning of the war and quickly established a reputation as an outstanding operational pilot. In addition to taking the fullest possible share in all normal operations, he made single-handed attacks during his “rest” nights on such highly defended objectives as the German battleship Tirpitz, then completing in Wilhelmshaven.

When his tour of operational duty was concluded, he asked for a further operational posting and went to a night-fighter unit instead of being posted for instructional duties. In the course of his second operational tour, he destroyed at least three enemy bombers and contributed much to the raising and development of new night-fighter formations.

After a short period in a training unit, he again volunteered for operational duties and returned to night bombers. Both as an operational pilot and as leader of his squadron, he achieved outstandingly successful results and his personal courage knew no bounds. Berlin, Cologne, Danzig, Gdynia, Genoa, Le Creusot, Milan, Nuremberg and Stuttgart were among the targets he attacked by day and by night.

On the conclusion of his third operational tour, Wing Commander Gibson pressed strongly to be allowed to remain on operations and he was selected to command a squadron then forming for special tasks. Under his inspiring leadership, this squadron has now executed one of the most devastating attacks of the war—the breaching of the Moehne and Eder dams.

The task was fraught with danger and difficulty. Wing Commander Gibson personally made the initial attack on the Moehne dam. Descending to within a few feet of the water and taking the full brunt of the antiaircraft defences, he delivered his attack with great accuracy. Afterwards he circled very low for 30 minutes, drawing the enemy fire on himself in order to leave as free a run as possible to the following aircraft which were attacking the dam in turn.

Wing Commander Gibson then led the remainder of his force to the Eder dam where, with complete disregard for his own safety, he repeated his tactics and once more drew on himself the enemy fire so that the attack could be successfully developed.

Wing Commander Gibson has completed over 170 sorties, involving more than 600 hours operational flying. Throughout his operational career, prolonged exceptionally at his own request, he has shown leadership, determination and valour of the highest order. 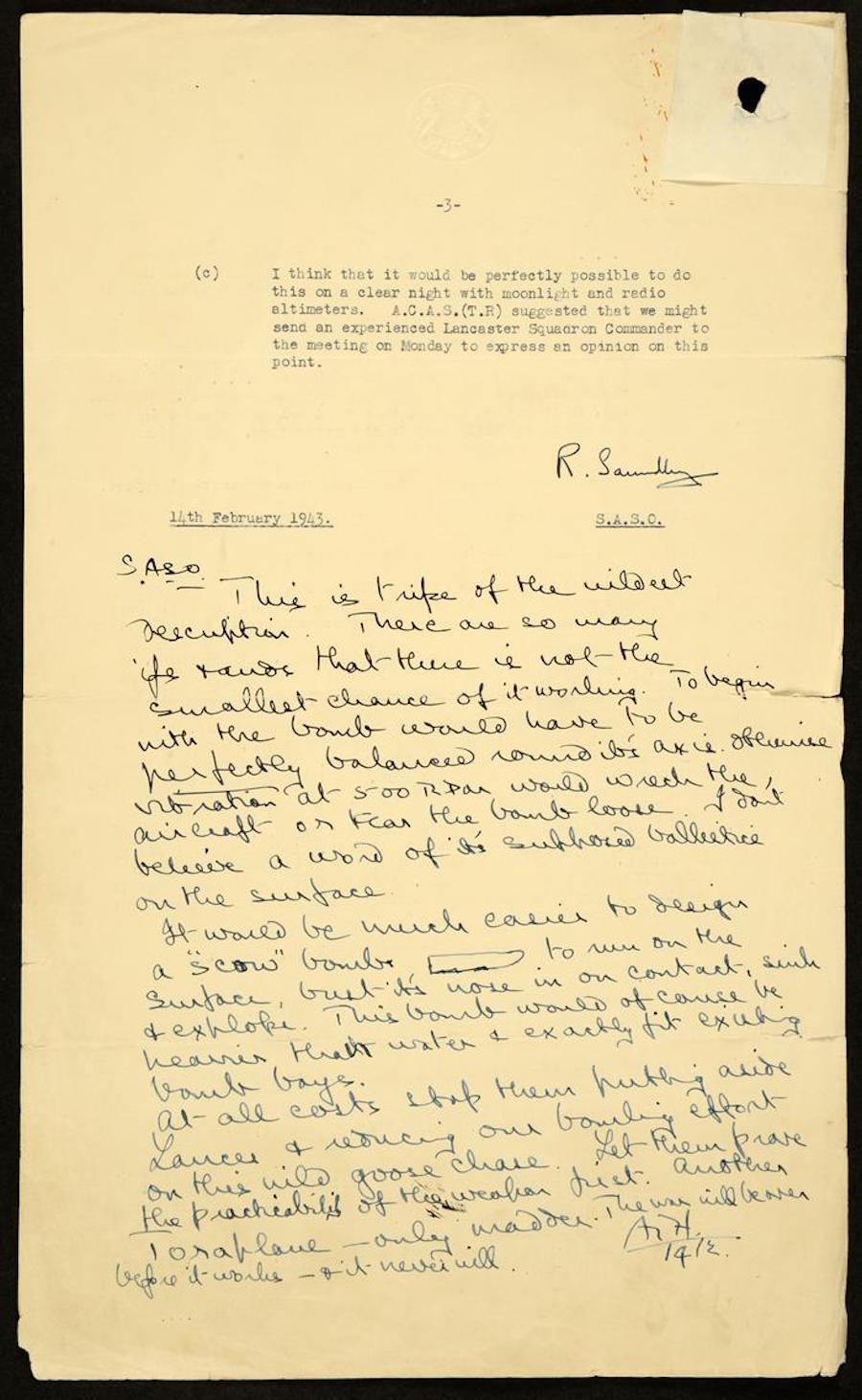 Memo from “Bomber” Harris concerning bouncing bomb tests Description: Memo from Arthur Harris concerning bouncing bomb tests “This is tripe of the wildest description. There are so many ifs and ands that there is not the smallest chance of it working. To begin with the bomb would have to be perfectly balanced around its axis. Of course vibration at 500 RPM would wreck the aircraft or tear the bomb loose. I don’t believe a word of its supposed ballistics on the surface. It would be much easier to design a “scow” bomb to use on the surface, push its nose in on contact, sink and explode. This bomb would of course be heavier than water and exactly fit existing bomb bays. At all costs stop them putting aside Lances and reducing our bombing effort on this wild goose chase. Let them prove the practicality of the weapon first… The war will be over before it works and it never will.” Date: 14 February 1943 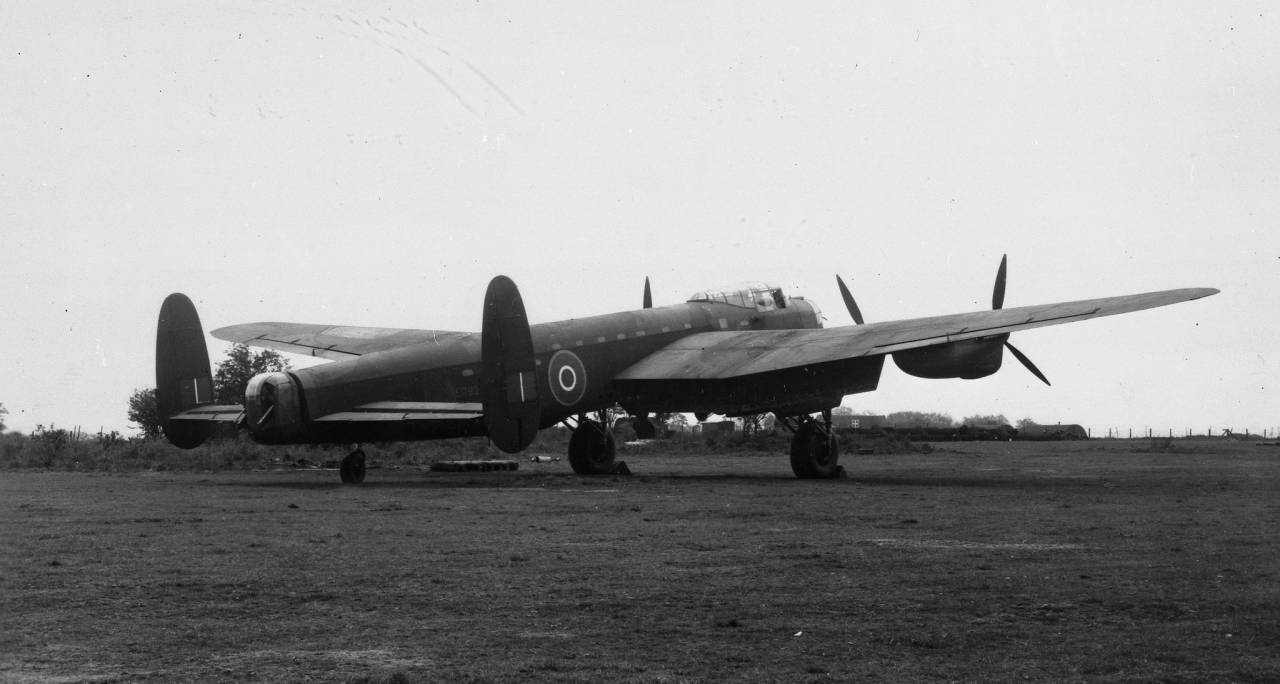 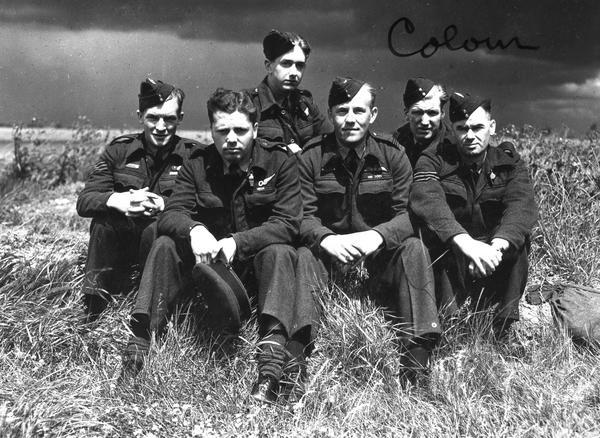 Here’s the music that Guy Gibson played when he appeared on Desert Island Discs a few months before he died in 1944: 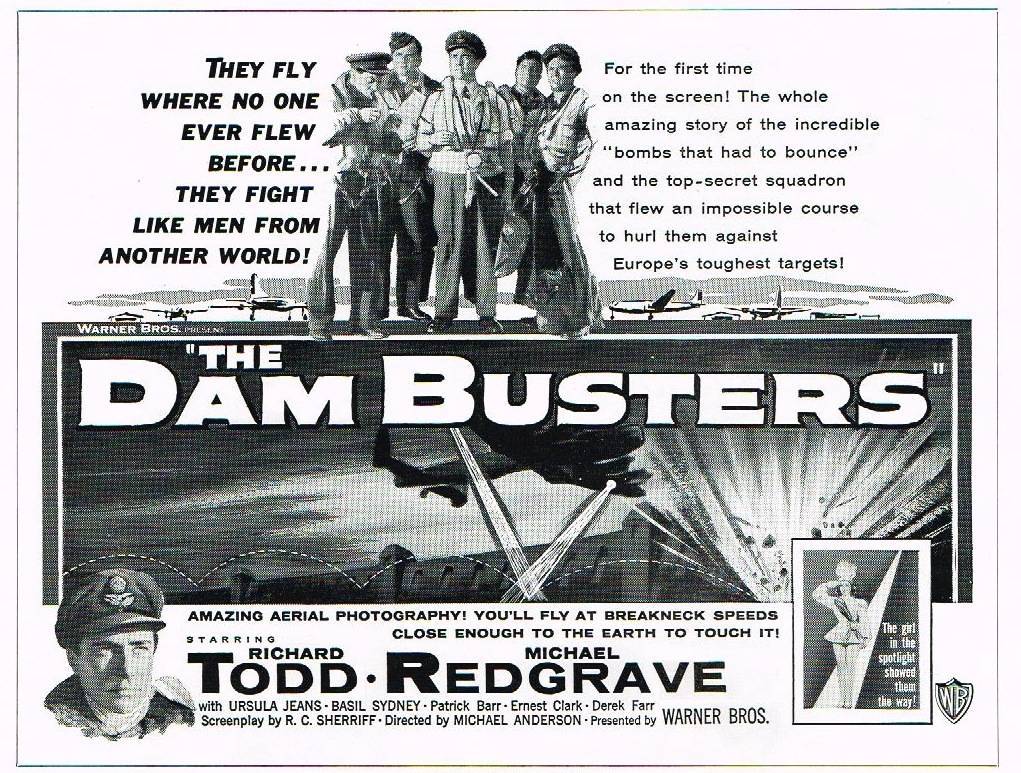 Poster for Dambusters, the movie released in 1955.

Much of the ephemera and photos come from the National Archives collection.