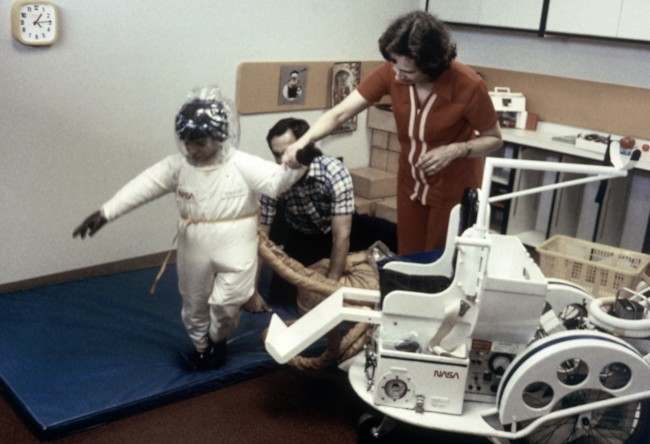 With help from his parents, David Vetter 6, of Houston, walks for the first time outside the isolation bubble he has lived in all his life. David is wearing a germ-free suit called the Mobile Isolator System developed by NASA in cooperation with the Texas Children Hospital at an estimated cost of $20,000. David was born with severe combined immune deficiency. The cart carries a life-support system and a chair for David. (AP Photo/NASA)

In 1970, David J. Vetter III was born. Medics at the Texas Children’s Hospital find that the child has severe combined immunodeficiency (SCID). He died aged 7 months.

* They look to the team of doctors at Texas Children’s Hospital for assistance. If Carol Ann’s genes indeed carry SCID, there is a one in four chance this child will carry the same disease.

After amniocentesis determines that Carol Ann Vetter’s baby is a boy, doctors explain that he has a one in two chance of being born with SCID. The option of abortion is offered, and refused. Though bone marrow transplantation is in its infancy and requires a near-perfect match between donor and recipient, Raphael Wilson assures the Vetters that the child can be born into a germ-free environment and maintained there until a bone marrow transplant can be performed.

September 21: David Phillip Vetter is born in Texas Children’s Hospital. The hospital staff has made a heroic effort to create germ free conditions. After less than twenty seconds of exposure to the world, the baby is placed in a plastic isolator bubble that will protect him from disease.

He only ever touched another human being in the days before he died. 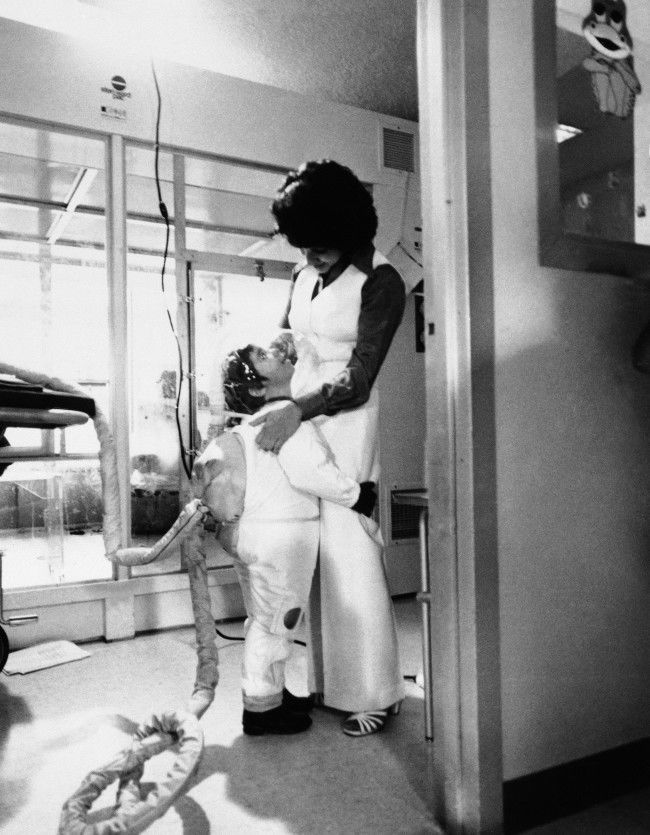 Little David Vetter, the six-year-old “bubble baby”, gives his mother Carol Ann Vetter, a hug while wearing his new Mobile Isolator System, in Houston, Nov. 4, 1977. The long hose attached to David’s back is a live-support system that pumps air into the suit.

* “Why am I so angry all the time?” he asked psychologist Mary Ada Murphy one summer evening. As he sat in his plastic isolation chamber on the third floor of Texas Children’s Hospital, he could see Fannin Street from the room’s window. But he couldn’t touch that outside world, or participate in it. Whatever I do depends on what somebody else decides I do,” he said. “Why school? Why did you make me learn to read? What good will it do? I won’t ever be able to do anything anyway. So why? You tell me why.”

“I can’t say why,” replied Murphy. 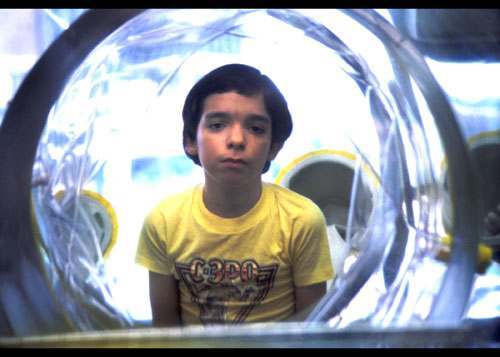 No perfect match was found.

By 1983 research in bone marrow transplants had advanced to the point where donors did not have to be exact matches to recipients. There was new hope that David might be able to receive his sister’s bone marrow, generate an immune system, and leave his protective environment. After the entire family discussed the procedure, the teenaged Katherine had her marrow extracted in Boston. Doctors treated it and then flew it down to be donated to David. That Christmas, as a thank you gift, David gave Katherine a sapphire and diamond ring that their mother had helped pick out.

“The decision to have another child came from our hearts and our minds. We were not trying to fill a void, to replace the son we had just lost. We decided to place our trust in God. No matter what happened, to us a therapeutic abortion would have been out of the question. Our choice was very simple: Have a child or not have a child.” 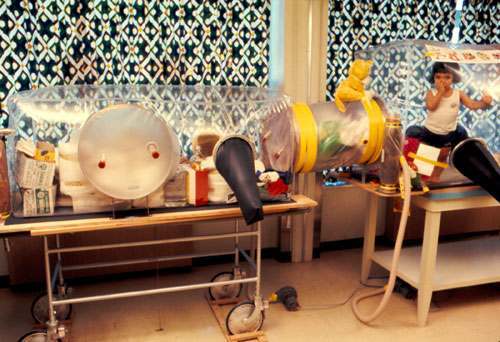 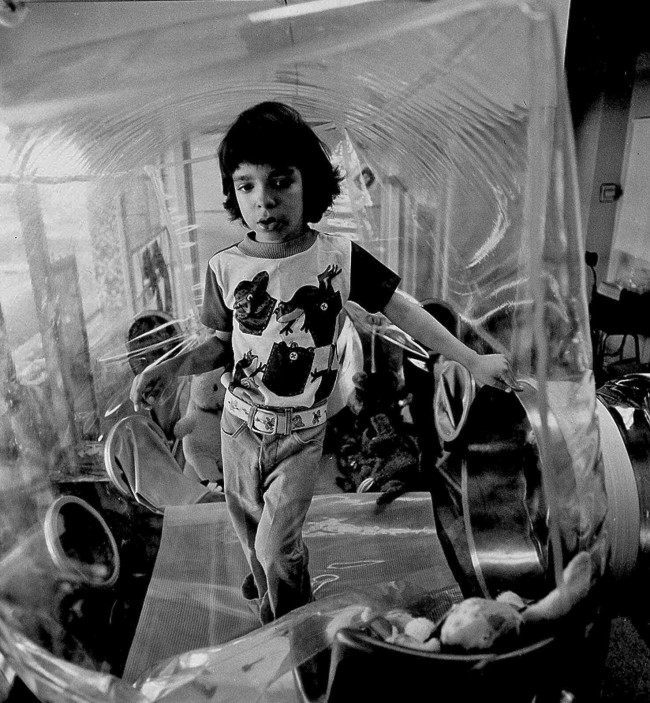 David Vetter poses inside of his bubble in his Houston home in this Dec. 17, 1976 file photo. 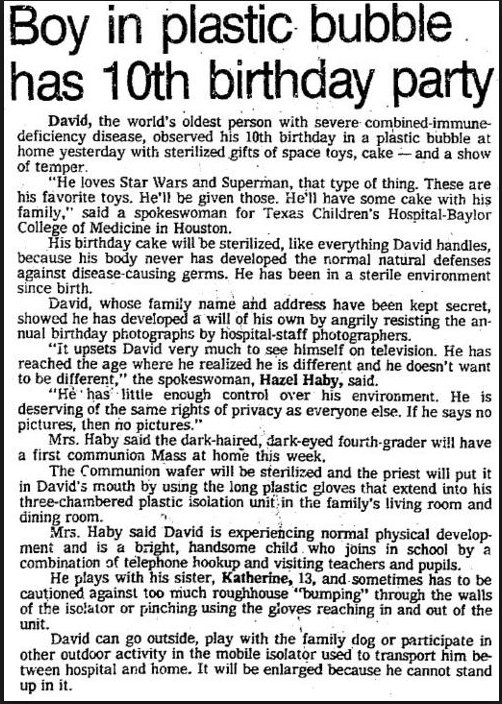 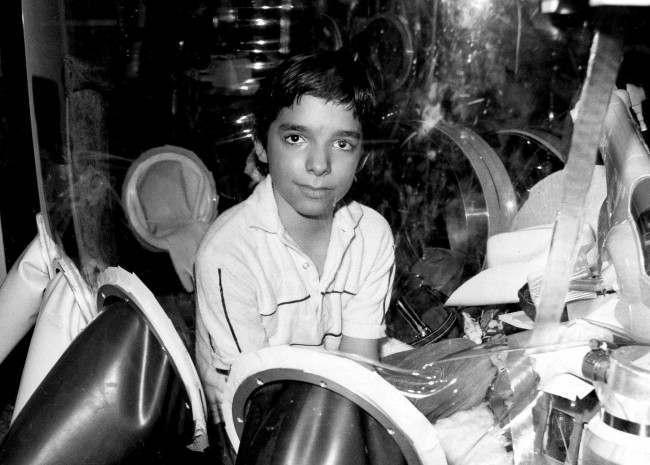 David Vetter, born with an inherited disorder, which leaves him no natural immunities against disease, is shown in this Sept. 11, 1982 photo in Texas. Now, those closest to Vetter, fear a Walt Disney Studios film about a love-struck boy who crosses the country in a bubble will mock Vetter’s life. “Bubble Boy” is scheduled to be released on Friday, Aug. 24, 2001, by Touchstone Pictures, a division of Walt Disney Co. In 1984, Vetter died from complications of an experimental bone marrow transplant, thought to be his only chance at survival outside his bubble. (AP Photo)

Doctors at Great Ormond Street Hospital for Children, London, have have created a long-term immune function with a technique that uses disabled viruses to get working copies of the defective gene into the body. Of the 16 children who have had the procedure, 14 are living normal lives and the oldest is about to start secondary school. Researchers say in the journal Science Translational Medicine that the treatment amounts to a cure.

“It’s a lifelong cure,” Bobby Gaspar, the consultant in paediatric immunology who led one half of the programme, told The Times. “Some of [the children] continue on medication but others are free of medication and all are free of social restraints — they can go to school, play, swim, go to parties.”