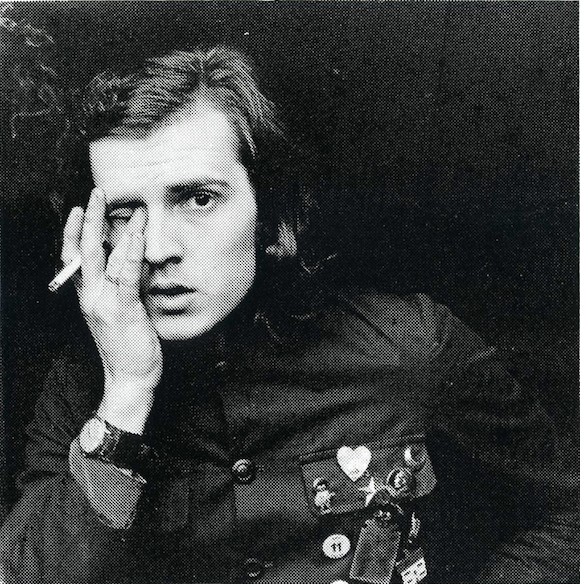 David Parkinson’s body of work – sexy, simultaneously gritty and glamorous – captured the development of street fashion and British boutique culture from the late 60s to the mid-70s, and includes exclusive images of Malcolm McLaren and Vivienne Westwood and the other individuals and ground-breaking designs emanating from the series of shops at 430 King’s Road in London’s World’s End as it changed from Mr Freedom and Paradise Garage to Let It Rock and SEX. 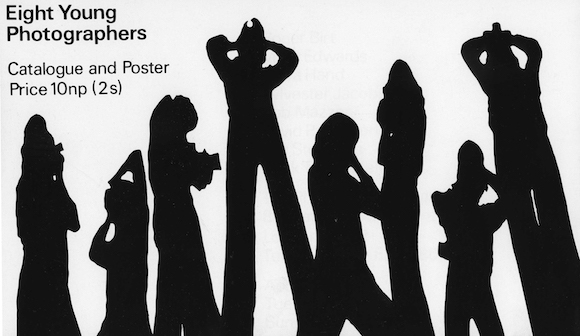 Front, catalogue/fold-out poster, for the show which ran at the Photographers Gallery in Great Newport Street from April 6 to May 2, 1971. Courtesy Mark Trompeteler. No reproduction without permission

Eight Young Photographers was the third exhibition to be held at the newly-opened Photographers Gallery at its original premises in Great Newport Street in London’s West End.

The gallery opened in January 1971 with a group show entitled The Concerned Photographer featuring, among others, Robert Capa, and followed that by simultaneously staging three exhibits, including a display of Polaroids taken by Andy Warhol.

Visitors to Eight Young Photographers, which ran during April and into early May that year, recall it as being an important staging post in the acceptance of photography as a subject worthy of artistic appreciation. Among the contributors was the late David Parkinson (1946-1975), about whom I have written often. He showed work alongside Mark Edwards, Meira Hand, Roger Birt, Sylvester Jacobs, Tim Stevens, Bob Mazzer and Mark Trompeteler (who has kindly retrieved the catalogue/poster for me from his archive).

From the Photographers Gallery listings. The show was preceded by an exhibition of Andy Warhol’s Polaroids

“It was a very exciting time for design and photography in the UK,” says Trompeteler. “We’d had landmark exhibitions in the preceding years: the Bauhaus at the Royal Academy in 1968, and around that time, the first-ever photography exhibition at a major national institution, Cecil Beaton at the National Portrait Gallery.

“Photographers were becoming known and entering the world of national celebrity, colour supplements were showcasing photography, and the influential educator Bill Jay was publishing his magazine Album, which was supplementing the established and influential Creative Camera. The practice of photography was being accepted as part of national mainstream creative and artistic activity and degrees in the subject were being offered. With the first dedicated gallery to photography opening up in London just months before, it was a real privilege to be part of this exhibition.” 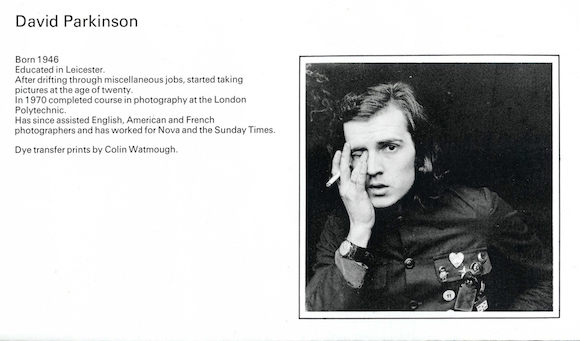 Photographer Ian Hargreaves – who goes by the soubriquet Hag and himself later exhibited at the Photographers Gallery – believes the participation by his college mate Parkinson to have been particularly important.

Like Hag, Parkinson was fresh from completing a degree in photography at the London Polytechnic (known as the Regent Street Poly and now Westminster University).

“Dave certainly had a flamboyance of style, coupled with a calm confidence,” says Hag. “I recall his inlaid leather jacket and black and silver Cuban-heeled boots.” 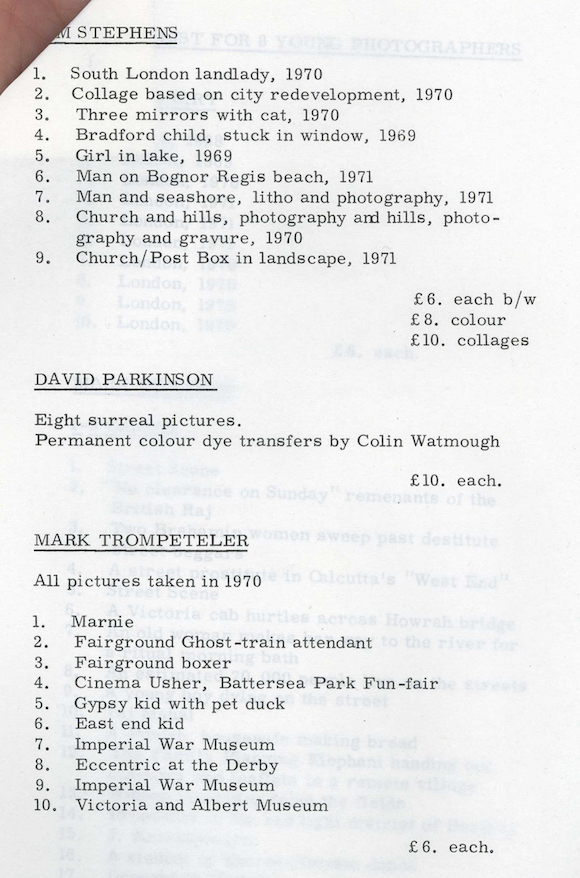 Hag believes that Parkinson, who dedicated his section of the show to surrealism, was the first British photographer to stage an ‘art’ colour photography show at a photographic gallery.

“He showed his final year work: stunning studio still-lives of surreal, deeply colour-saturated prints with stark backgrounds,” says Hag. “These were way ahead of the time in use of colour and the manner in which they subverted commercial photography into a fine art photography style.” 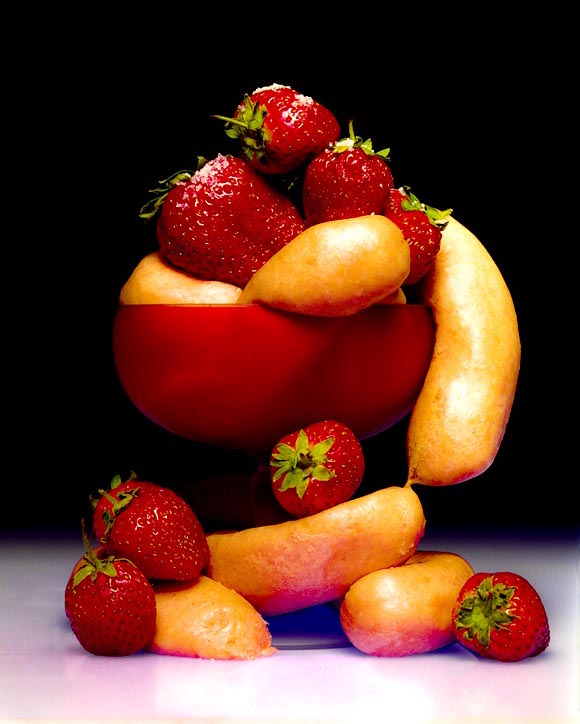 One of the 1971 Parkinson works colour-corrected and retouched by Hag 2016. Photo: David Parkinson. No reproduction without permission 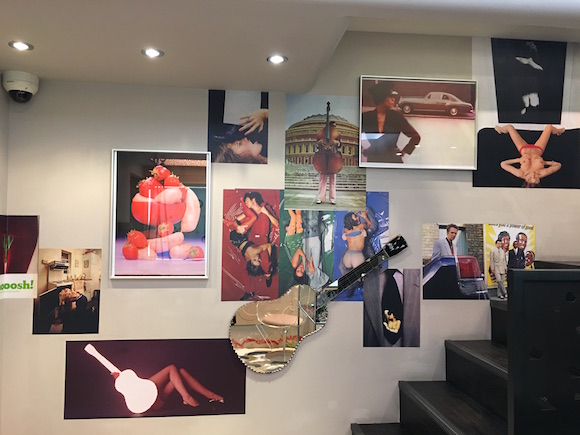 Sausages & Strawberries in the Parkinson section of The Conformist earlier this year. Photo: Belmacz

One of Parkinson’s exhibits was the so-called Sausages & Strawberries, which, like the other works, was produced as a die-transfer print by another former Regent Street Poly student, Colin Watmough.

Art director Steve Ridgeway was particularly struck by Parkinson’s photos when he visited Eight Young Photographers. “I was always on the look-out for decent contributors so dropped into the show and was knocked out by David’s work,” says Ridgeway, who commissioned contributions for the adult magazine Men Only, including a Parkinson photoshoot for a feature on violent youth cults. 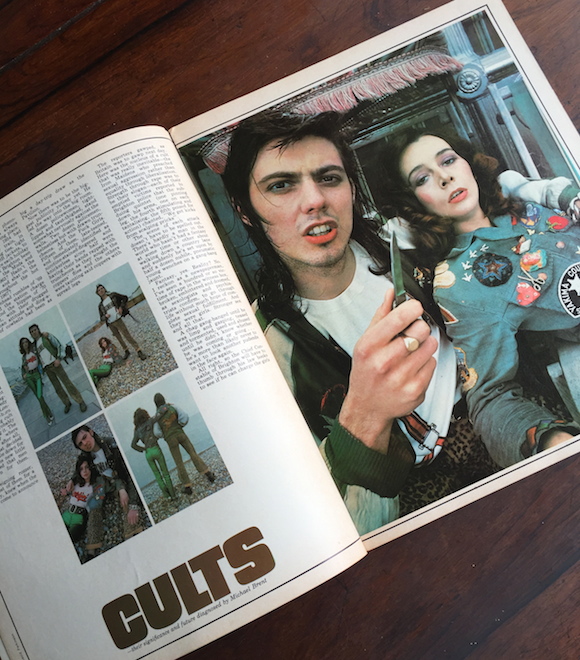 And when Ridgeway was drafted in to Paul Raymond’s upmarket men’s mag launch Club International, he commissioned Parkinson as part of a strong visual team which included Hipgnosis and such leading graphic artists as Bush Holyhead and the associated NTA Studios. “I immediately asked David if he was interested in working for us and it just took off from there.” 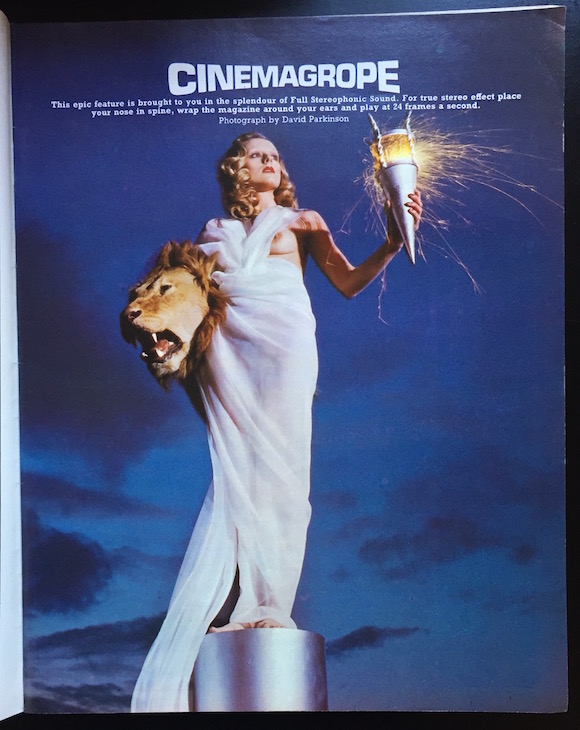 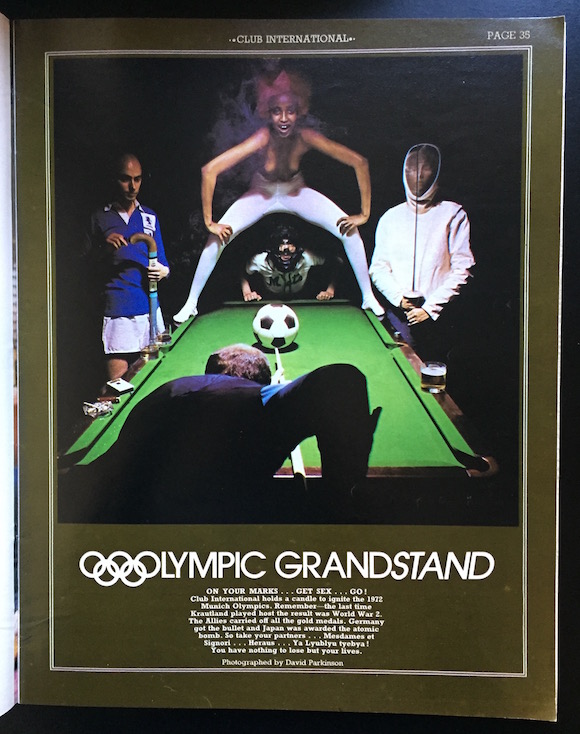 Ridgeway and Parkinson’s professional relationship blossomed, particularly when the latter assumed the role of fashion editor of Club International, where he featured many of the cutting edge boutiques and labels of the era, including Malcolm McLaren and Vivienne Westwood’s Let It Rock and Sex, Willy Daly and Tommy Roberts’ City Lights Studio and John Krevine and Steph Raynor’s Acme Attractions. 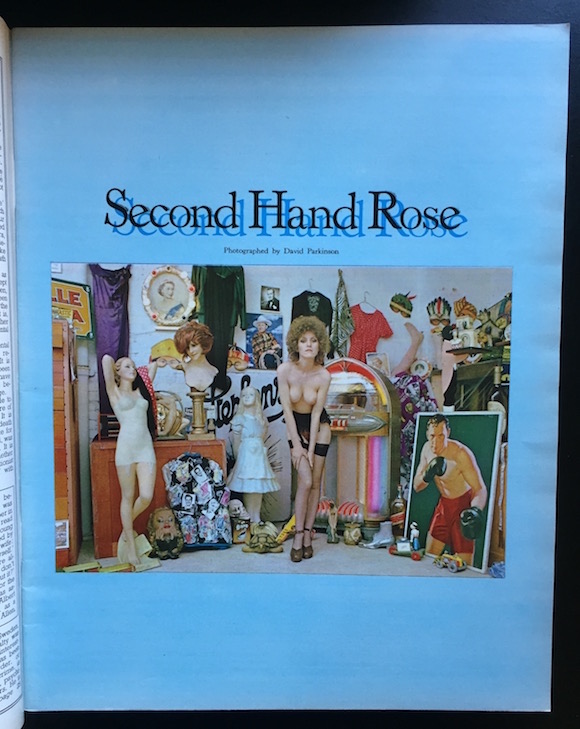 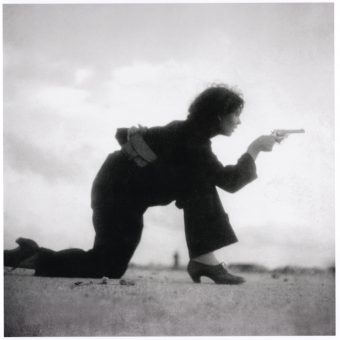