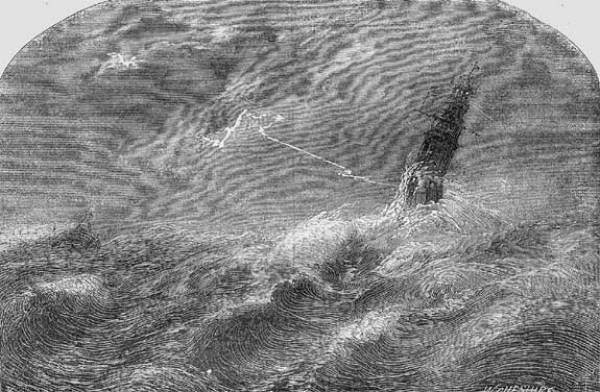 The destruction of the Eddystone Lighthouse

HOW bad are the storms pummelling the British Isles?

This is from Daniel Defoe’s The Storm: or, a Collection of the Most Remarkable Casualties and Disasters Which Happen’d in the Late Dreadful Tempest, both by Sea and Land (1704):

We have reckoned, including the City of London, about 123 People kill’d; besides such as we have had no account of; the Number of People drowned are not easily Guest; but by all the Calculations I have made and seen made, we are within compass, if we reckon 8000 Men lost, including what were lost on the Coast of Holland, what in Ships blown away, and never heard of, and what were drowned in the Flood of the Severn, and in the River of Thames.

What the Loss, how many poor Families ruin’d, is not to be Estimated, the Fire of London was an exceeding Loss, and was by some reckon’d at four Millions sterling; which, tho’ it was a great Loss, and happened upon the spot, where vast Quantities of Goods being expos’d to the fury of the Flames, were destroy’d in a hurry, and 14000 dwelling Houses entirely consum’d. Yet on the other Hand, that Desolation was confin’d to a small Space, the loss fell on the wealthiest part of the People; but this loss is Universal, and its extent general, not a House, not a Family that had any thing to lose, but have lost something by this Storm, the Sea, the Land, the Houses, the Churches, the Corn, the Trees, the Rivers, all have felt the fury of the Winds.

I cannot therefore think I speak too large, if I say, I am of the Opinion, that the Damage done by this Tempest far exceeded the Fire of London. They tell us the Damages done by the Tide, on the Banks of the Severn, amounts to above 200000 pounds, 15000 Sheep drown’d in one Level, Multitudes of Cattle on all the sides, and the covering the Lands with Salt Water is a Damage cannot well be Estimated: The High Tide at Bristol spoil’d or damnify’d 1500 Hogsheds of Sugars and Tobaccoes, besides great quantities of other Goods. ‘Tis impossible to describe the general Calamity, and the most we can do is, to lead our Reader to supply by his Immagination what we omit; and to believe, that as the Head of the particulars is thus collected, an infinite Variety at the same time happened in every place, which cannot be expected to be found in this Relation. 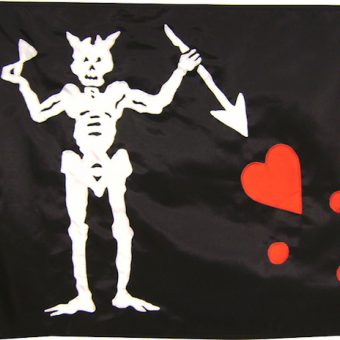