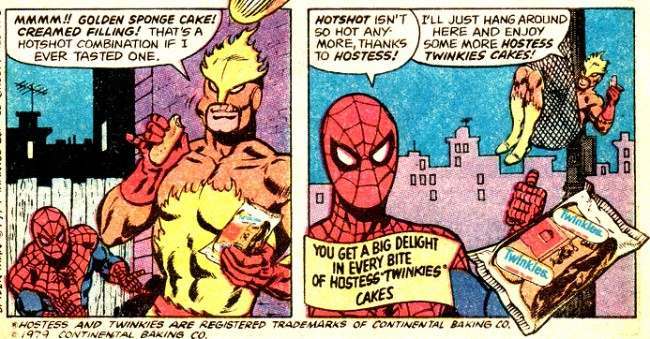 MANY of you will remember the Hostess snack adverts that appeared in comic books throughout the 70s.  They all had the same basic story: a villain is subverted from his diabolical plan by a well-known superhero… and the help of a sugary cream-filled cake.

This may be genius marketing (after all, comic books and junk food go well together), but it’s also a bit troubling because it calls a few things into question:

This is and many other questions need to be explored.  Let’s do a little research and start with a confrontation between Captain Marvel and Nitro.  To summarize:  The super villain Nitro has plans to flood the entire planet, but Captain Marvel distracts him with a ship carrying a cargo of Twinkies. 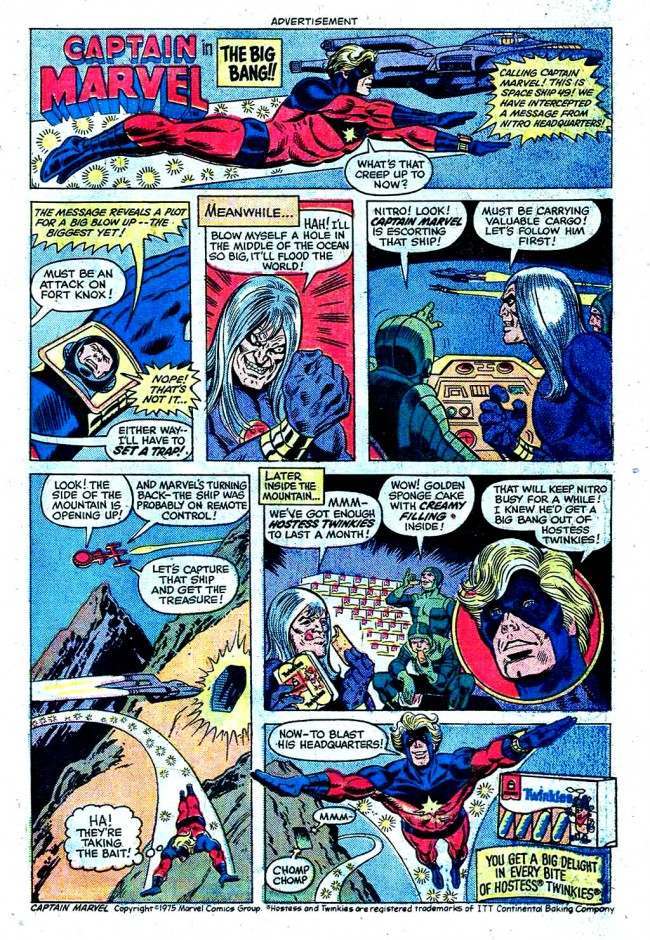 Thus,  a global apocalypse is literally averted because Captain Marvel has a few crates of Twinkies on hand to tempt him away from his evil scheme.

A victory this easy seems a little hard to digest.  Can you imagine if The Dark Knight had ended with the Joker vanquished by Twinkies? So, I conducted a little research on our bad guy, Nitro.  As it turns out, he was a villain to be reckoned with.  He could transform parts of his body into an explosive gas, and was responsible for the ultimate demise of Captain Marvel. 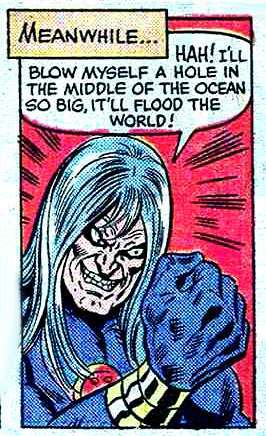 Somehow, he got it into his little head that blowing a hole in the ocean floor will flood the earth.  Okay, maybe not the most thought-out plan in the Evil Villain playbook; however, it does sound wildly destructive.  What could possibly stand in his way?

Oh, for the love of God… 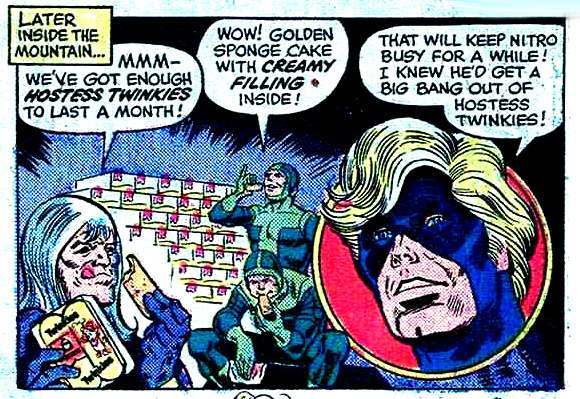 Really?  Was Nitro so strapped for cash that he couldn’t afford his own supply of Twinkies?

It seems more likely that the “creamy filling” contains an active ingredient beyond the limits of human understanding.  Yet, these superheroes have somehow harnessed its powers.  Let’s learn more… 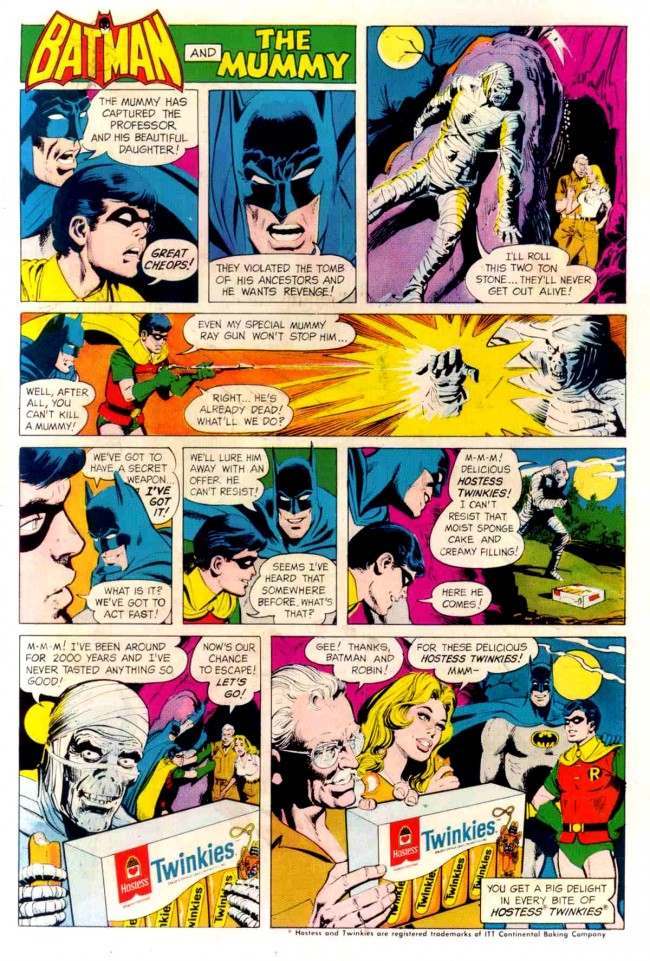 In this story, Batman’s boy-toy, Robin, literally fires a ray-gun at a mummy’s face to no effect.  It’s not until a box of Twinkies is laid upon the grass that this 2,000 year old monster is subdued.  No mysteries are cleared up in this episode, but The Caped Crusader does let something slip when calls the Twinkie his “secret weapon”.

Hmmmm. Secret Weapon indeed.  The final piece of the puzzle lies in the conflict between Captain America and The Red Skull.  All shall be revealed. 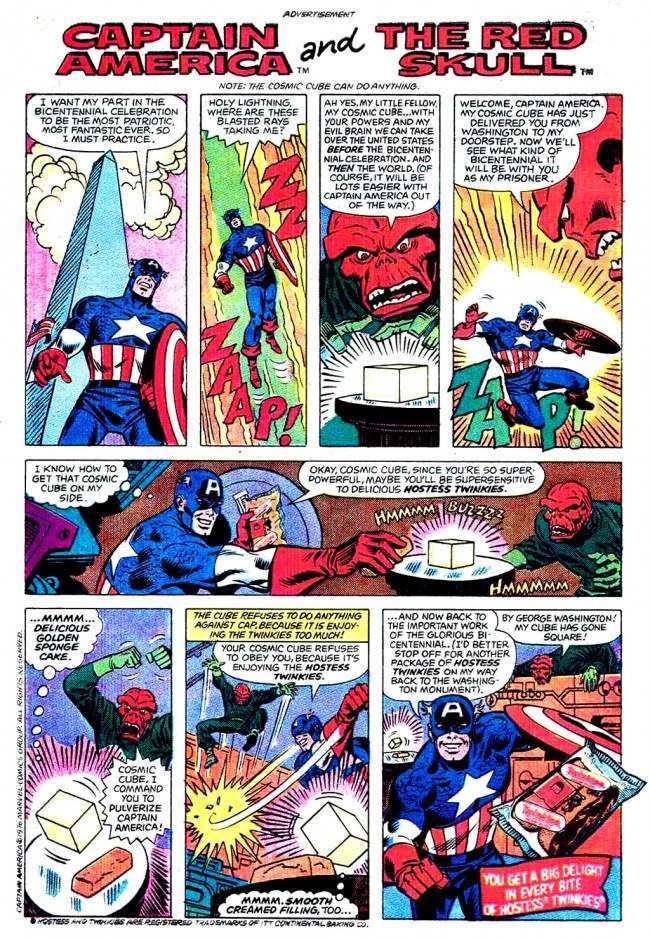 The Red Skull has allied himself with one of the most godlike forces in all of time and space– The Cosmic Cube.  According to ComicVine:

Cosmic Cubes are among the most powerful objects in the universe. They are created out of energy from another dimension. Anyone in possession of the cosmic cube can use it to reshape reality to mirror their vision.

Surely, an entity such as this will not bow before the power of a Hostess snack cake…. And yet the unthinkable happens. 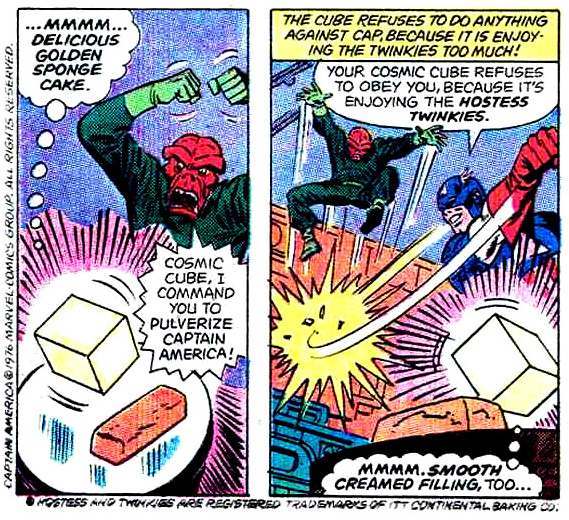 Well, there it is.  As crazy as it sounds, the the most powerful thing in the universe is undoubtedly the Twinkie.  No nemesis is too powerful to stand in its way, and every superhero from Batman to Captain America is not above resorting to its seemingly infinite powers when the chips are down.

Be careful with this information, dear reader.  With great power comes great responsibility.