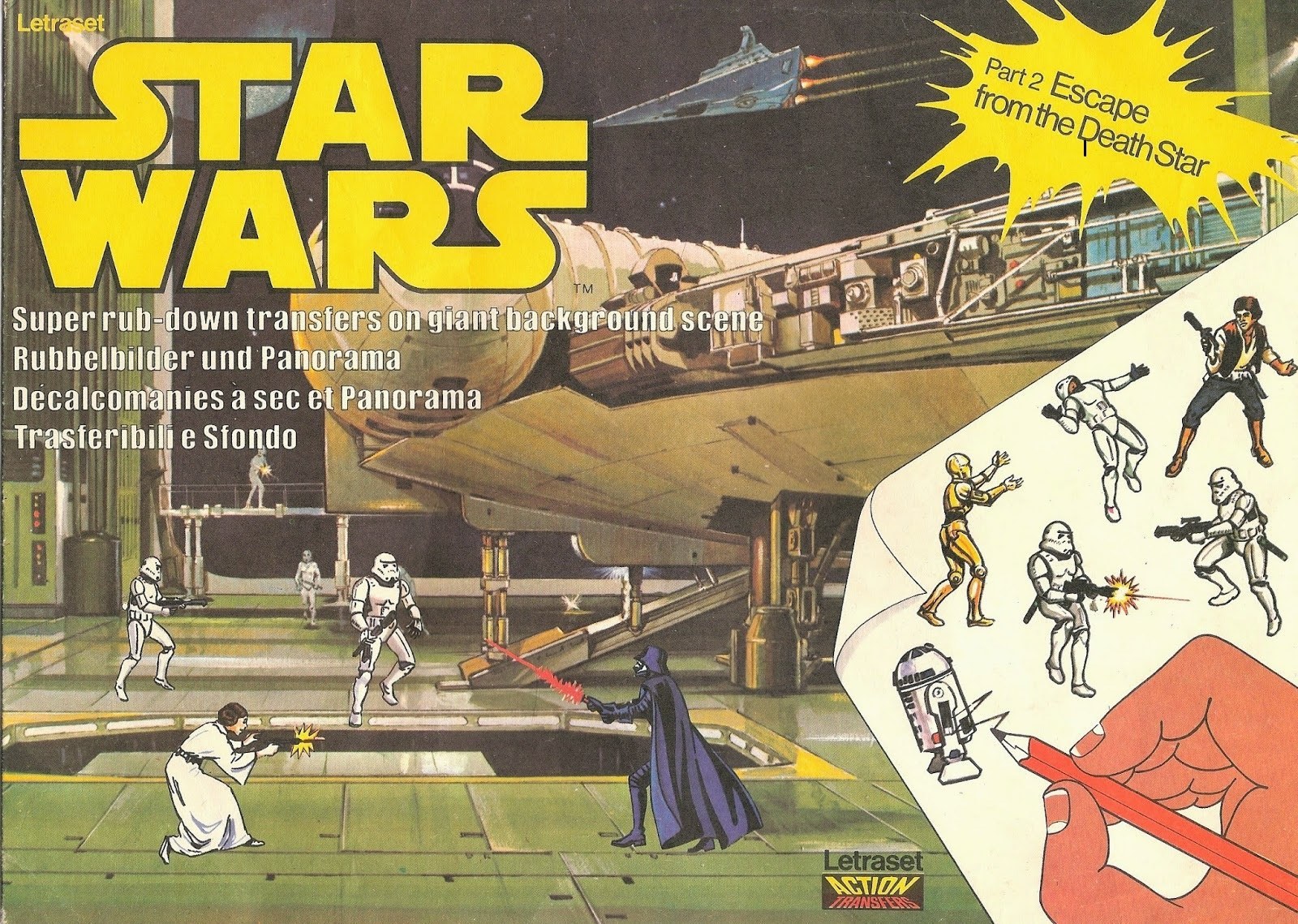 Another great line of toys I remember from the 1970s and 1980s: the Letraset Action Transfers.

In toy booklets of this type, you could “rub down” two-dimensional paper figures onto a detailed background, creating an original action scene in the process.

As the action-transfer booklets promised: “You can create your own super-action packed scene with rub down transfers on a big coloured background.”

Though Letraset Action Transfer sets existed in the 1960s, the disco decade sets featured popular science fiction licenses of the day and so remain of great interest to me.

For example, the popular Gerry and Sylvia Anderson series Space: 1999 (1975-1977) had two Action Transfer Sets: “Terror of the Planet Cyborg” (which was set against a painted background of the Zennite landscape seen in the Year One episode “Missing Link”), and “Battle on the Planet Insectus.”

The original Star Trek (1966-1969), popular in syndication in the 1970s, had its own Letraset Action Transfer Set as well: “Voyage to the Lost Planet.”

Popular superheroes of the era also had sets made with their characters and scenarios. “Tarzan vs. The Catmen,” “Batman vs. The Joker” and “Superman vs. Brainiac and the Reptillians” were just a few of the choices.  Marvel’s Spider-Man had his own set as well. 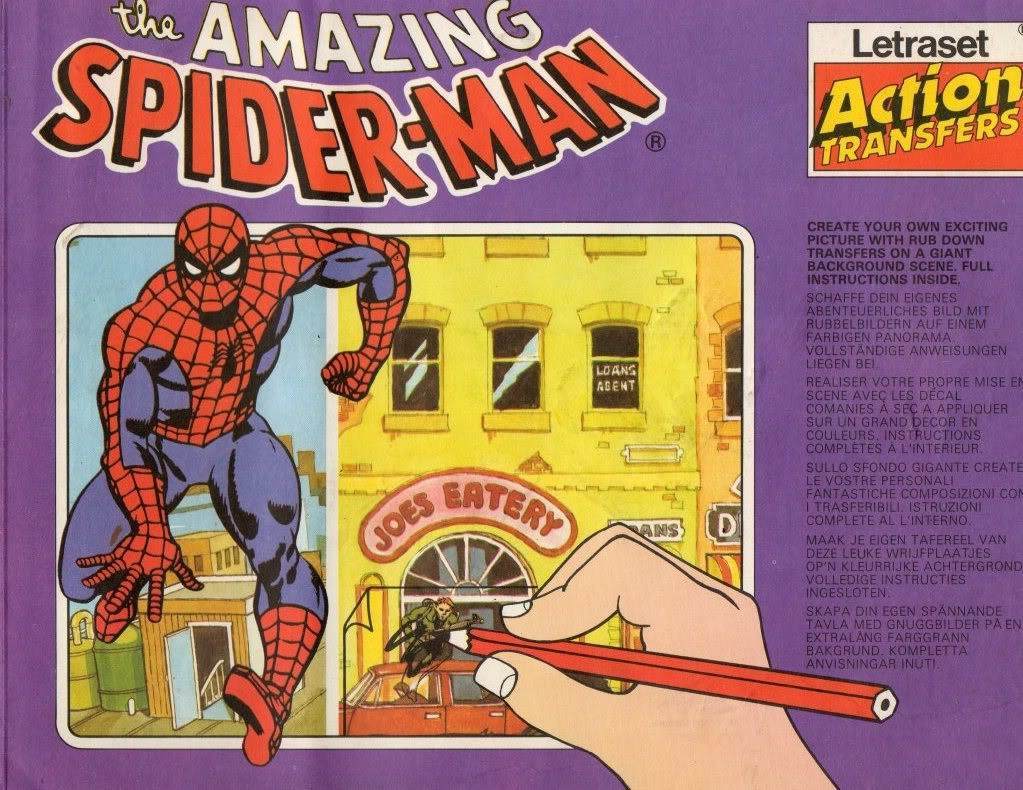 In 1977, George Lucas’s blockbuster Star Wars had no less than three licensed Letraset Action Transfer booklets, including one depicting the Millennium Falcon’s escape from the Death Star, and another showcasing preparations to fight that battle station at the rebel base. 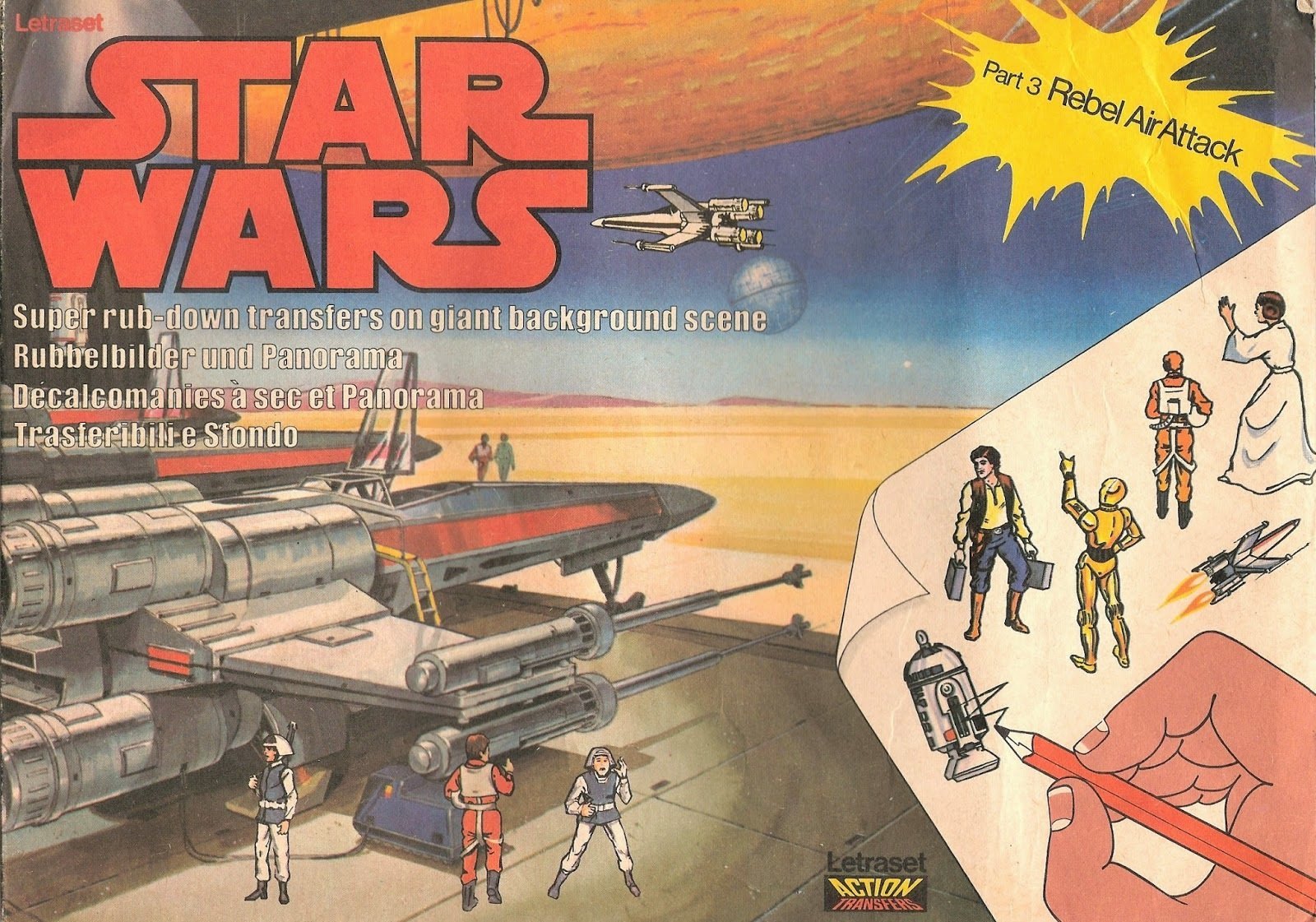 I must admit, I actually knew nothing of these Action Transfer sets as a youngster in the 1970s. My first experience with Letraset Action Transfers came in 1980, when the Ideal Toy Corporation and Interfun Toys got in the act with Letraset to create an original science fiction action-transfer line. The line was called: “Universal Task Force.”

There were six different “episodes” or play booklets — “sci-fantasy packs” — in the line which contained the following materials: over sixty multi-color action transfers, over fifty glow-in the-dark “action” transfers, two starships to cut out, decorate and fly, one iron-on for your T-shirt and best of all, a full color battle scene for “you to complete.”

The Universal Task Force featured a diverse group of space heroes doing battle across the universe against villains of all varieties. “Only you can decide the fate of your heroes!” the toy packs blared, and indeed, that was true. I loved playing with these sets. 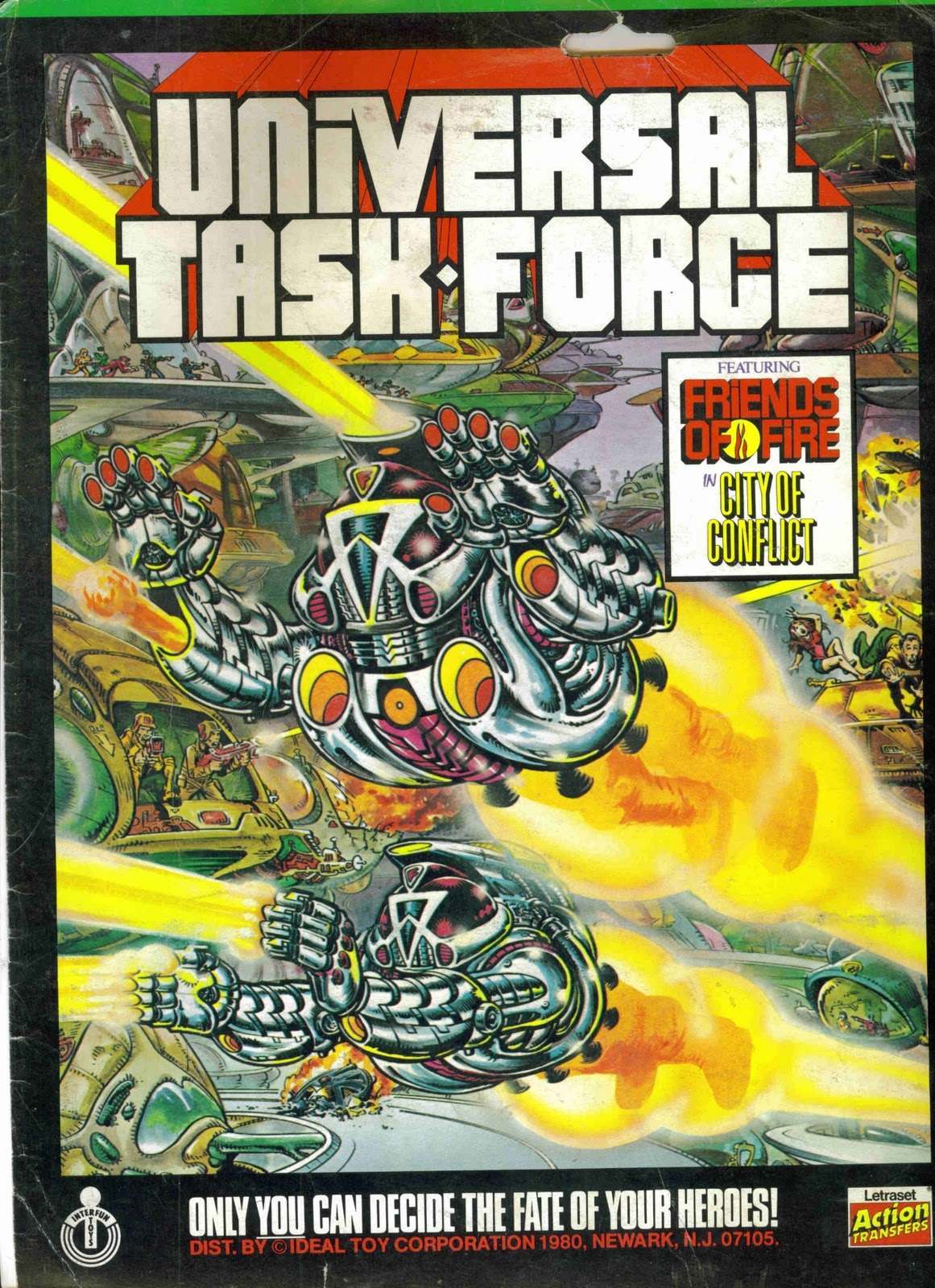 The line was comprised of the following booklets:

In “Commander Clone: Sabotage!” you could take the Task Force Leader, Commander Clone and his army of clones into space combat against “sinister invaders” called “The Gree” who were attacking giant Solar Conservers over the Eden-like planet of Kabaal.

In “Demona: Mutant Marauders and Fallout Freaks,” you sided with the mutant femme fatale Demona in her just cause.

“The nerve-endings in her brain warped, twisted, reformed in new connections…till she felt the dark areas of her mind open up! She was still a human, still a woman, but now she had the power of the Dark Forces to command!” the description blared. And her mission was to lead a convoy of “Normals” across a vast desert — a nuclear wasteland (populated by mutants) — to sanctuary.

In “Friends of Fire: City of Conflict,” the robot law enforcement team, “the Friends of Fire” — who resembled the Cylon Centurions of Battlestar Galactica (1979-1980) — dealt with a bloody riot on Kolos, a “giant city-asteroid” following a contested election between the People’s Party and the Elitist Party.

This “cyborg clean-up crew” had “only one order” programmed into them: “Stop the conflict!” This was the first Universal Task Force set I ever saw, thanks to my best friend and next door neighbor, and I was fascinated by it.

Then there were the adventures of other Universal Task Force members: Kaarl The Korrector (“Rampant Reptoids”) and The Lasers (Insectae Invasion).

The final adventure of the Universal Task Force was titled “Robot Revolt” and it was the “avengers assemble” story of the bunch  Commander Clone, Demona, the Friends of Fire and others went into battle against robots gone mad on the mining planet Syn-Syn.

The legends on the backs of these sci-fi packs admonished kids to “watch out for the further adventures of the Universal Task Force,” but, alas, they never came.

Still, the Universal Task Force booklets spurred my interest in the Letraset Action Transfers, and I soon learned that kids in England had been enjoying them for a very long time. If I only I had known in time to find a Space:1999 booklet!