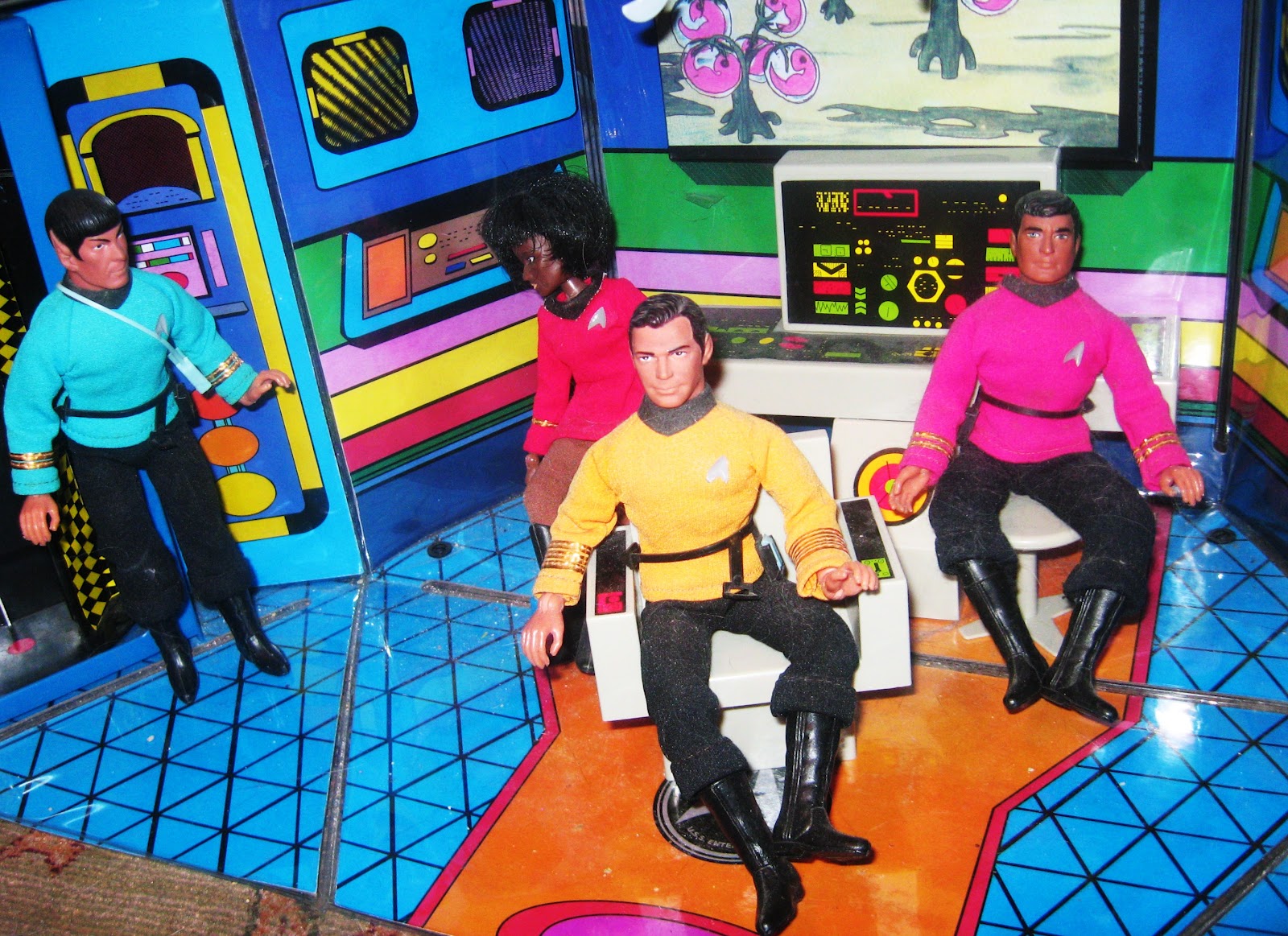 It’s funny to think about, but almost all the great adventure — in all the various iterations of Star Trek, Prime Universe or Kelvin — starts on the bridge of a starship.

A model kit doesn’t promise the same interactivity as a playset, but in the 1970s, Star Trek fans were thrilled nonetheless when AMT released the U.S.S. Enterprise Command Bridge model kit. 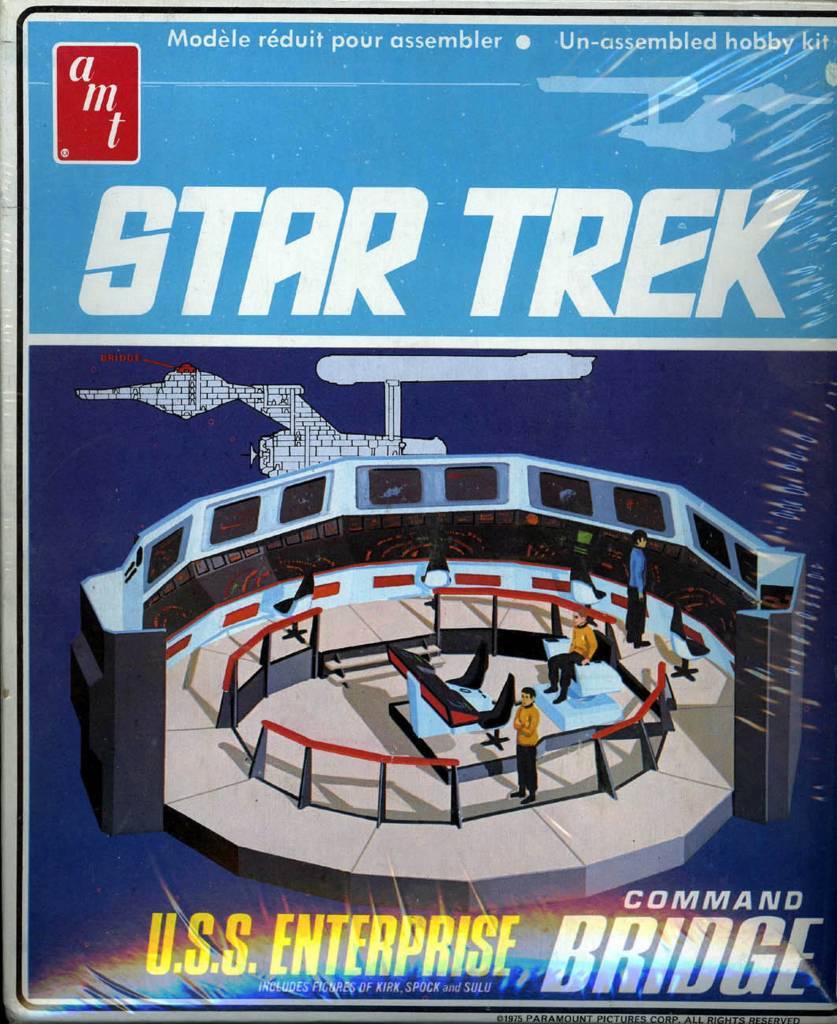 This kit replicated “the nerve center of the United Federation Starship Enterprise,” and came with three figurines of the crew (Kirk, Spock, and Sulu) that required assembly and painting.

The bridge itself – and all accoutrements like chairs and consoles – had to be assembled and painted too, and the set also came with decals to recreate the colorful displays on the upper wall of the original NCC-1701 bridge.

The kit had a number of drawbacks (including chair stands that broke easily), but the big concern was that Uhura, Scotty and Chekov were not included in the model. 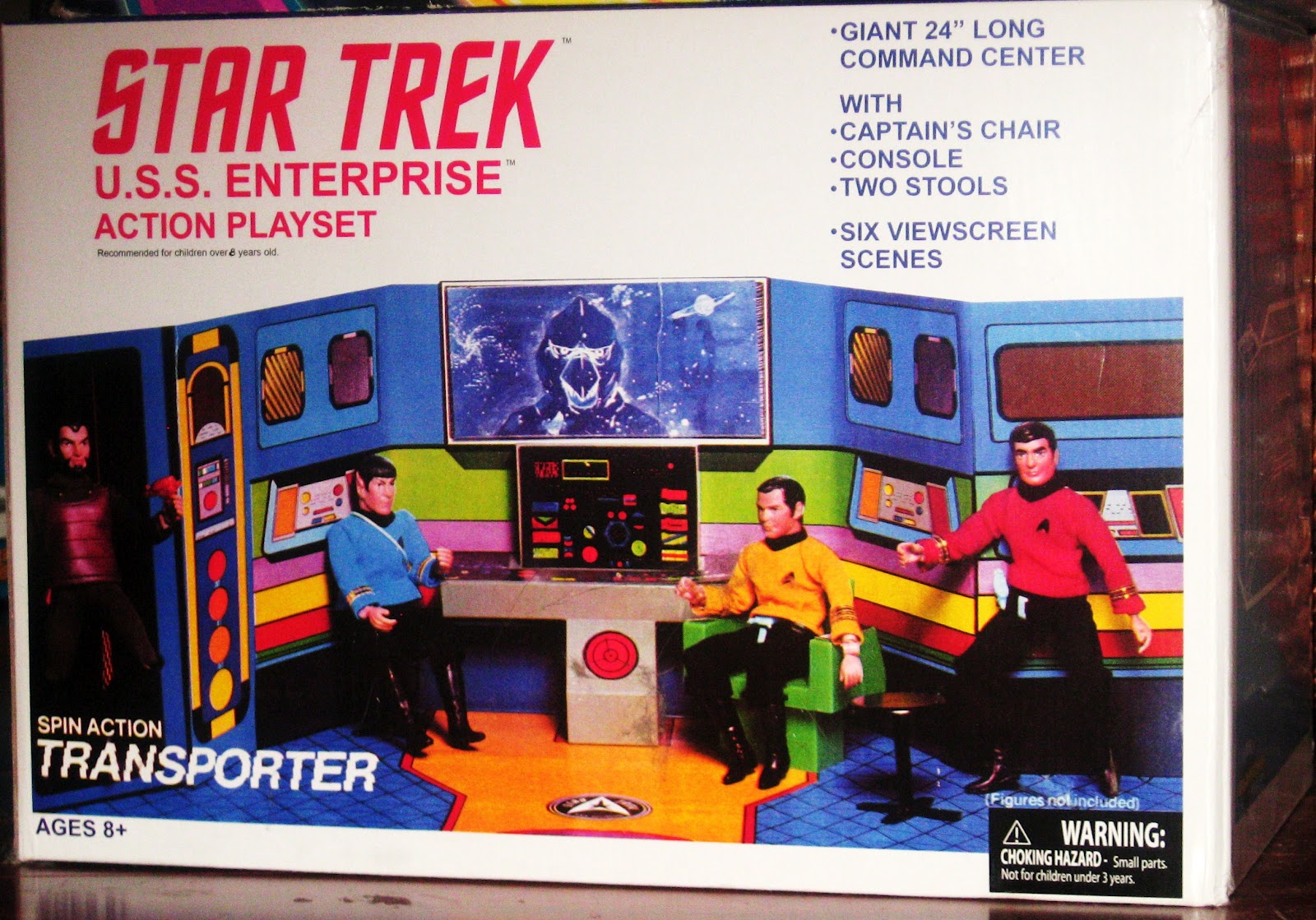 More interactive — and more durable too — was Mego’s Star Trek U.S.S. Enterprise “Action Playset, the toy of choice for a generation of Trekkie kids.

This mock-up of the U.S.S. Enterprise interior (bridge and transporter room) was a “giant, 24″ long command center,” “with captain’s chair, console, two stools” plus six interchangeable “view screen scenes.”  The set comfortably housed all the Mego Star Trek figures of the era, and, while not very show-accurate in terms of design, was nonetheless a great toy.

In 1979, to coincide with the release of Star Trek: The Motion Picture, Mego produced the new bridge playset to reflect the changes to the Enterprise since the end of the TV series. 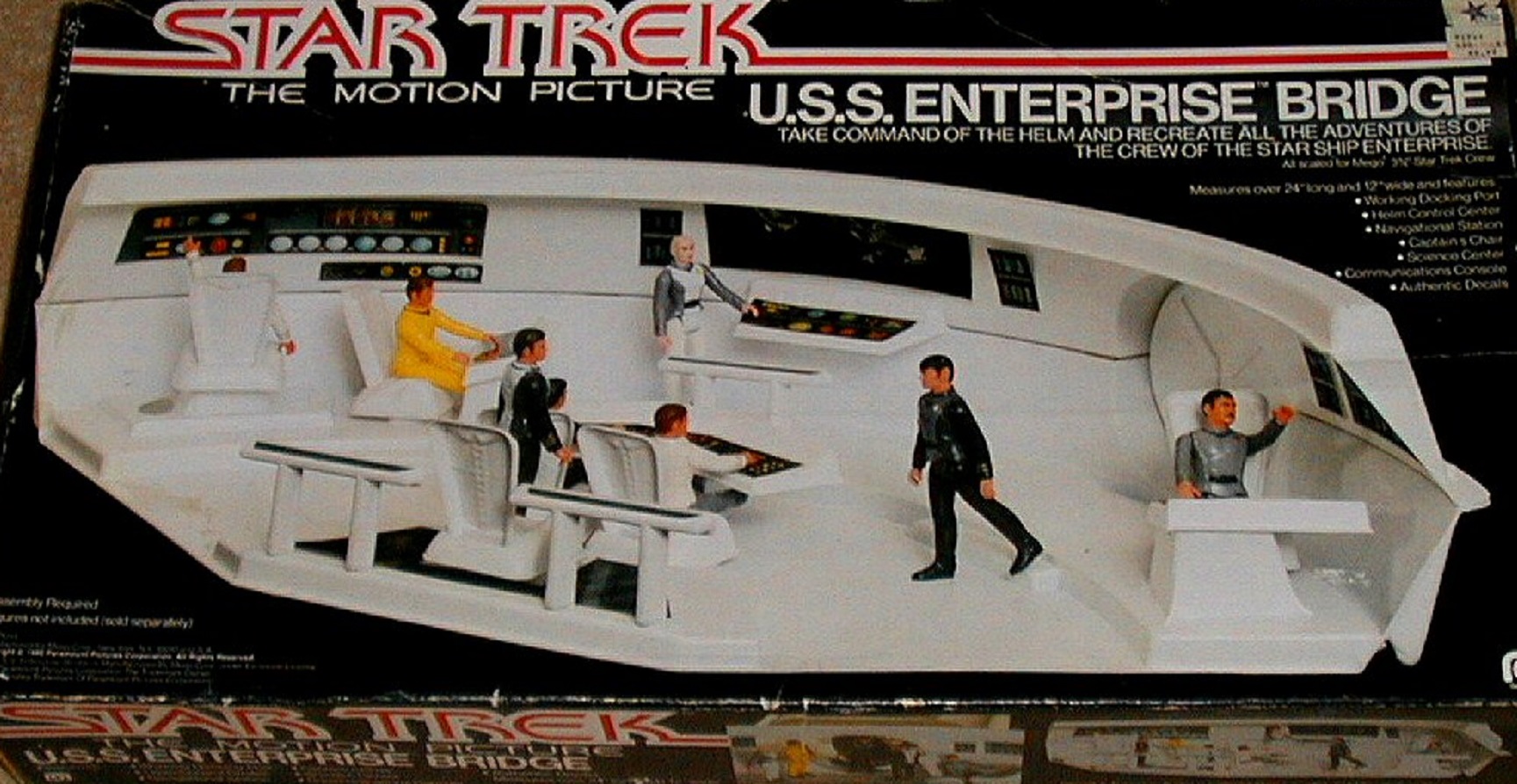 Alas, this highly prized (and incredibly expensive) toy is made of the flimsiest, most lightweight plastic imaginable, and held together only by tiny square adhesive stickers.  The control panels, meanwhile, are simple stickers. It’s a beloved toy for me, but also a bit of a disappointment.

In 1992, the most elaborate and detailed bridge set was created by Playmates.

This time, however, it was Jean Luc Picard’s NCC-1701-D, not Captain Kirk’s ship that was the featured playset.  Described by Playmates as  an “authentic reproduction” of the set featured on Star Trek: The Next Generation for seven seasons, this toy features a light-up view screen that reveals a Romulan War Bird in close proximity, plus “swivel” panels and “pivoting” chairs for the crew.  There are even “pull-out” seats for the “aft workstations.” 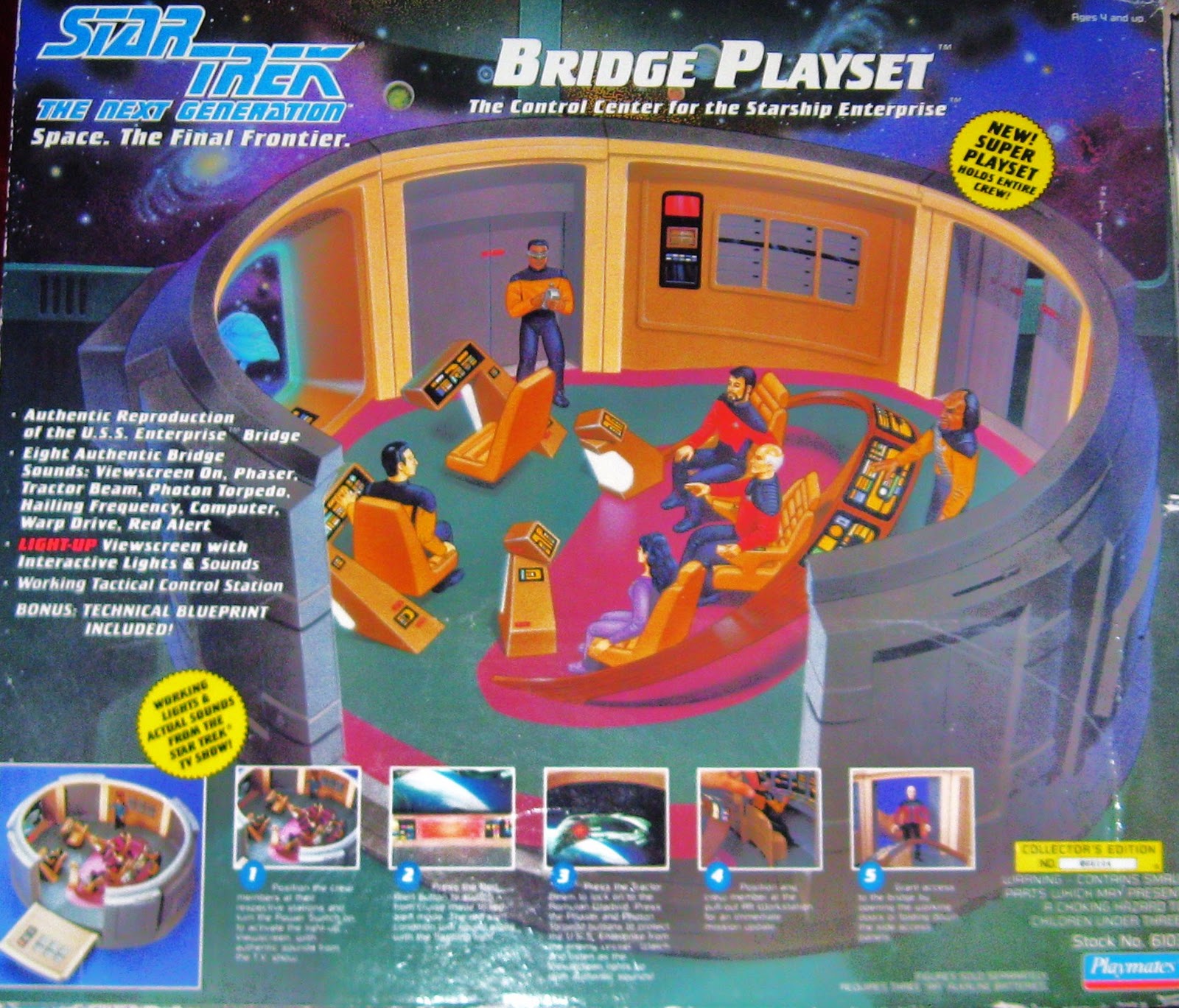 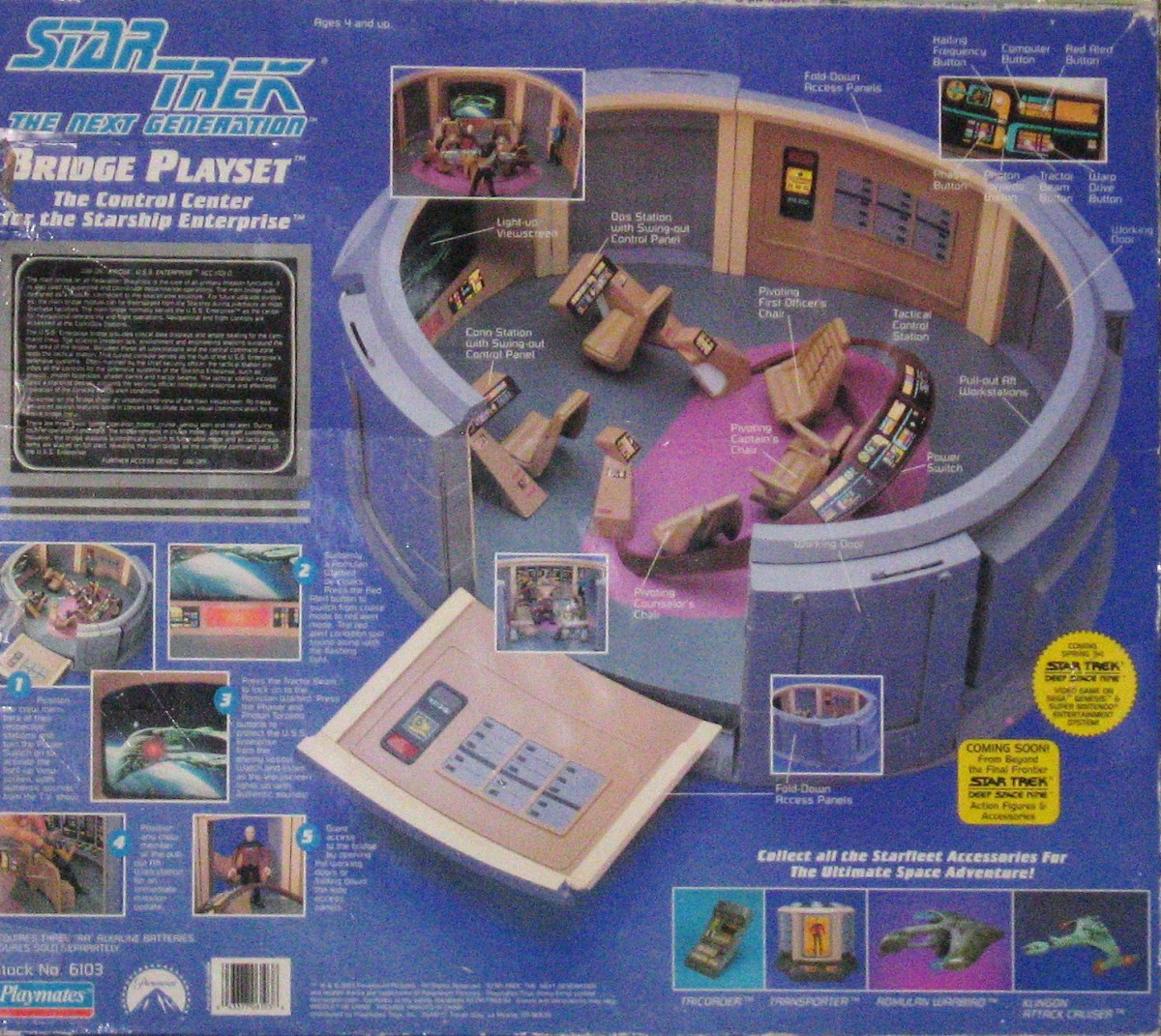 Another nice feature was that that this toy came with “Technical Blueprints” of the bridge, which was nice for adult collectors.

Finally, in 2009, Playmates released a “Detailed replica” of the bridge of the Enterprise featured in J.J. Abrams’ Kelvin Universe re-boot Trek.

Compared to Picard’s bridge recreation, this set isn’t entirely impressive.  For one thing, there is no floor, just a circular mat. The only components for the bridge are a main view screen (showing Nero’s huge ship…), two data screens, and the captain’s chair and helm command.  All the stations surrounding the perimeter of the bridge — including Spock’s and Uhura’s – are nowhere to be found. Actually, you had to buy further action figures to get some of the missing consoles.

Still, as a kid who grew up in the 1970s, it was great to see a new Star Trek bridge playset in the 21st century.