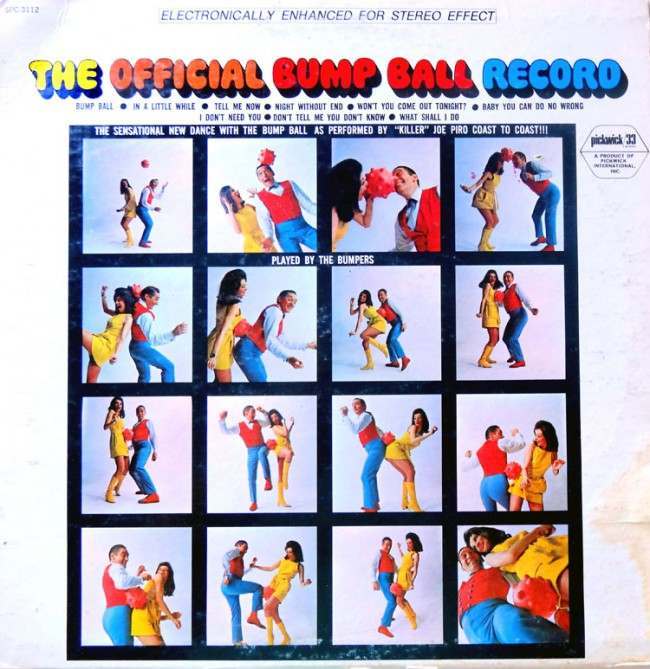 THIS record is proof of a glitch in the Matrix.  Life is an illusion, a computer simulation, created by aliens to harness our biologic energy…. it’s literally the only explanation for this record.

Apparently, in 1968 the Milton Bradley Company tried to market their new “Bump Ball” by issuing a corresponding record.  The rules of the game: (1) Throw the Bump Ball into the air, then (2) you and your partner attempt to catch it between your bodies.

Never mind the fact that you could play this game even better with a balloon.

Is it just me, or does this look less like a kid’s game and more like a flimsy excuse for old men to rub on young women?   The entire album cover is filled with images of a gentleman probably in his sixties groping a girl in an impossibly short skirt!

Who exactly was their target audience – hopelessly aroused senior citizens?  How often did poor old men buy this record for the purpose of a lecherous round of Bump Ball with a young miss, only to wind up slapped or arrested?

On to the back cover… 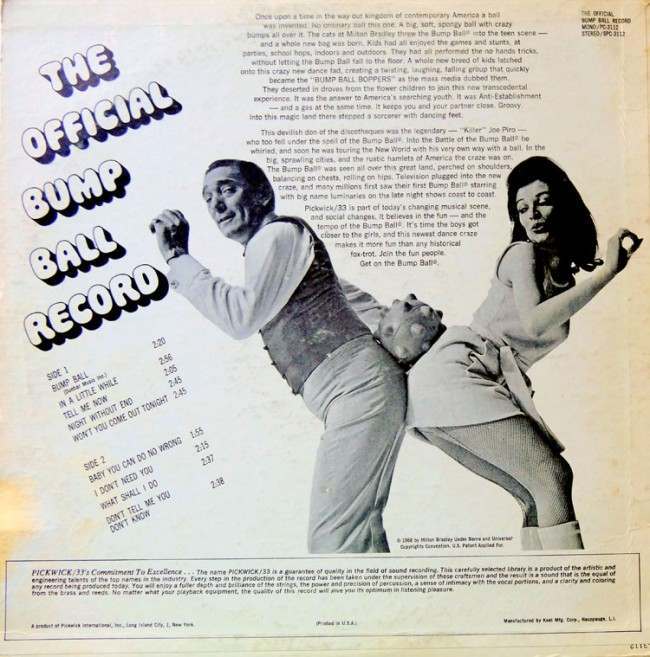 The liner notes on the back simply have to be read:

Once upon a time in the way out kingdom of contemporary America a ball was invented.  No ordinary ball this one; a big, soft, spongy ball with crazy bumps all over it.  The cats at Milton Bradley threw the Bump Ball into the teen scene — parties, school hops, indoors and outdoors.  They had all performed the no hands tricks, without letting the Bump Ball fall to the floor.  A whole new breed of kids latched onto this crazy new dance fad, creating a twisting, laughing, falling group that quickly became the “BUMP BALL BOPPERS” as the mass media dubbed them. They deserted in droves from the flower children to join this new transcendental experience.  It was the answer to America’s searching youth.  It was Anti-Establishment – and a gas at the same time.  It keeps you and your partner close.  Groovy.  Into this magic land there stepped a sorcerer with dancing feet….

Wait – what? Hippies are leaving their communes in order to catch balls with their asses? This is too insane for words.

We could talk all day and only scratch the surface.  Let’s move on to the titular song…

Strangely enough, it’s not completely awful. This is due in part to those involved:  Julie Andrews’ producer, James Brown’s horn section, and a singularly un-famous garage band known as the Combinations.  And the smirking fellow on the cover? “Killer” Joe Piro, the man who brought the mamba to the US.

It’s a glitch in the Matrix I tell you.