Brigitte Höss (born 18 August 1933) lived for four decades in Washington DC. During that time she worked in a Jewish-owned fashion store. And that’s interesting because her father was Rudolf Höss (aka Rudolf Hoess – 25 November 1901 – 16 April 1947), a leading Nazi and Kommandant of the Auschwitz death camp in Nazi occupied Poland, where 1.5 million people, mostly Jews, were killed. Hoess himself called Auschwitz “the largest killing center in all of history”.

Between the aged of 7 and 11, Brigitte Höss lived with her four brothers and sisters in a handsome villa with views of the death camp – the place her father designed and built. She also lived by Dachau and Sachsenhausen. (Brigitte’s on the left in the above photo.)  A former prisoner at Sachsenhausen recalled Rudoph Hoess:

On January 18, 1940, Hoess ordered more than eight hundred prisoners who were unfit for work to remain standing all day outside in thin prison clothing in a temperature of minus 15 degrees Fahrenheit. When many collapsed Hoess forbade subordinates to take them to the prison hospital. Asked why this was necessary, he replied: “If the others [who had left the camp in work details] must freeze, then these malingerers can spend a day in the cold too.” The prisoner who reports the incident, a trusty with supervision over others, says that when he finally told Hoess, “The men can’t take any more,” he received the curt reply: “They aren’t men, they are prisoners.” Hoess’s action caused the death of one hundred forty-five prisoners during the day and the night following, in addition to those who died of the consequences of their ordeal later.25 The account of this incident is consistent with that of a former prisoner at Auschwitz who testified that “Hoess would watch the beatings an hangings as if he were watching a movie, but with no reaction showing in his face.”

The Auschwitz house was decorated with objects stolen from the murdered prisoners. Men in striped pyjamas tended her family’s garden.

Only now is Brigitte Höss telling her story, speaking to author Thomas Harding, whose great-uncle, Hanns Alexander, captured Rudolf Höss in 1946. He writes of her in his book Hanns and Rudolf. She kept her past from her new family. Why? She tells us:

“There are crazy people out there. They might burn my house down or shoot somebody… I am still scared here in Washington. There are a lot Jewish people, and they still hate the Germans. It never ends.”

“It was a long time ago. I didn’t do what was done. I never talk about it — it is something within me. It stays with me.”

Should she have been killed, just as we kill the children of our enemies today, such as Saddam Hussein’s sons? Rudolf Höss was hanged for his crimes. She says she told the Jewish fashion store owner who employed her about her father. The author notes:

When I ask him why his parents had decided to employ her all those years ago, despite knowing that her father had been a senior member of the Nazi leadership that had driven their own family out of Germany, he told me that it was because of “humanity.”

His parents had seen her as a person, in her own right, apart from her father. “The one has nothing to do with the other. She is a human being,” he says. “She was not responsible for her father.” 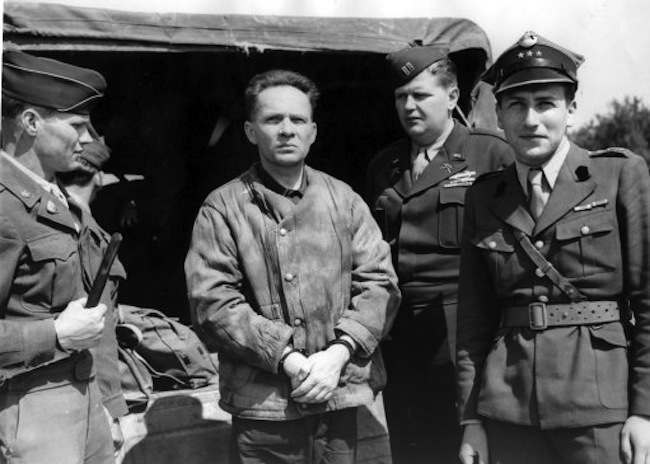 For Brigitte Höss, life went on. She left Germany for Spain, where she found work as a fashion model. In 1961, she married an American (divorced). They had a son and daughter. The son died. She has grandchildren. She lived in Liberia, Greece, Iran and Vietnam before moving to Washington in 1972.

“I’m sure he (her father) was sad inside. It is just a feeling. The way he was at home, the way he was with us, sometimes he looked sad when he came back from work. There must have been two sides to him. The one that I knew, and then another.”

“He had to do it. His family was threatened. We were threatened if he didn’t. And he was one of many in the SS. There were others as well who would do it if he didn’t.” 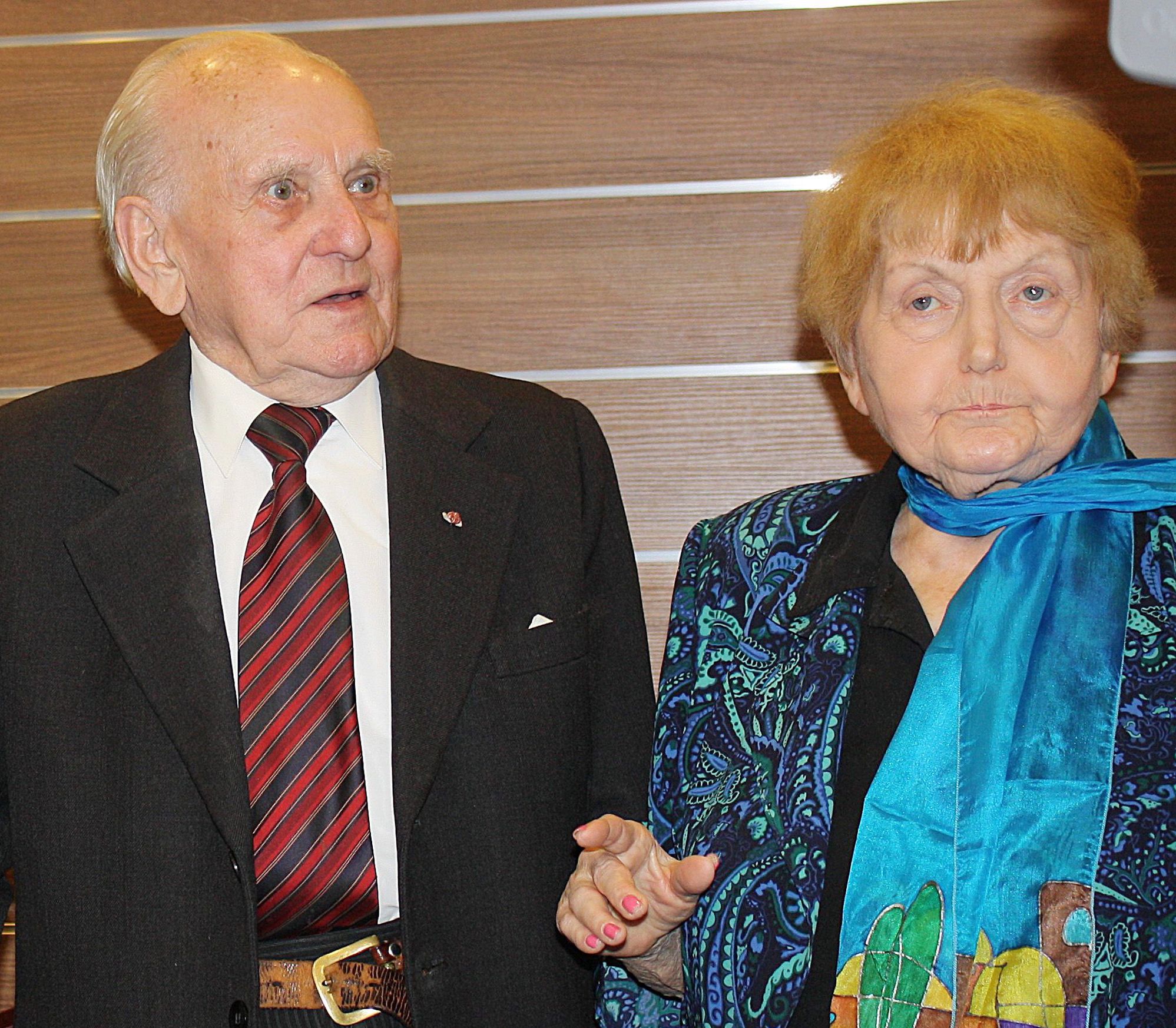 Jozef Paczynski, Eva Mozes Kor In this picture Jozef Paczynski,left, 95, a former Auschwitz prisoner who was the barber to camp commandant Rudolf Hoess, stands next to Eva Mozes Kor, 81, a Jewish survivor of experiments by the sadistic German doctor Josef Mengele, in Krakow, Poland. Paczynski spoke to a group about his experiences cutting Hoess’ hair for four years. He said he has been asked over and over why he didn’t use his sharp instruments to slit the throat of the mass murderer. “I thought about it,” Paczynski said. “But when I realized what the consequences would be I simply could not do it
29 Jan 2015

Her father went on the record, stating:

“The gassing was carried out in the detention cells of Block 11. Proctected by a gas mask, I watched the killing myself. In the crowded cells, death came instantaneously the moment the Zyklon B was thrown in. A short, almost smothered cry, and it was all over… I must even admit that this gassing set my mind at rest, for the mass extermination of the Jews was to start soon, and at that time neither Eichmann nor I was certain as to how these mass killings were to be carried out. It would be by gas, but we did not know which gas and how it was to be used. Now we had the gas, and we had established a procedure…

“I did, however, always feel ashamed of this weakness of mine after I talked to Adolf Eichmann. He explained to me that it was especially the children who have to be killed first, because where was the logic in killing a generation of older people and leaving alive a generation of young people who can be possible avengers of their parents and can constitute a new biological cell for the reemerging of this people.”

And then Brigitte wonders:

“How can there be so many survivors if so many had been killed?”

When I point out that her father confessed to being responsible for the death of more than a million Jews, she says the British “took it out of him with torture.”

And on it goes…

Most people think that eye for an eye suggests bloodthirstiness. What it really means is exactness. What it essentially means – and we get this from the Old Testament and, of course, in Hammurabi’s Code – that when a moral injury is created, a debt is created, and then payback is required, but it has to be specific. It has to be proportionate. And all an eye for an eye means is a way to prevent disproportionate revenge. Disproportionate revenge are blood feuds, recycling of vengeance, the Hatfields versus the McCoys.

Through the natural history of our species, we were able to manage revenge through tribes and individuals because people knew what enough – what was enough to be satisfied. And that means that when one loses an eye, they’re entitled to receive no more than an eye, but also no less than an eye. And in our system, unfortunately, with plea bargains, we’re very often shortchanged, and we’re constantly paying back less than an eye.

The Nazis and other murderous anti-Semites didn’t realise their depravity when they lost the war. They merely lost their power. Such are the facts…