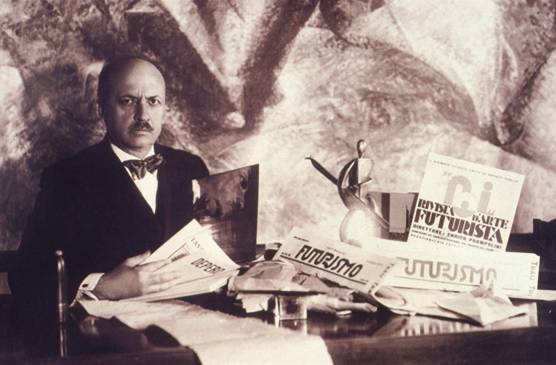 In 1932, Italian futurist Filippo Marinetti (1876–1944) published Marinetti’s Futurist Cookbook, a work that would trigger a “revolution of cuisine”. Humans, said Marinetti, “think, dream and act according to what they eat and drink”.

In the introduction, he writes not of taste and quality, rather of the style and a deathless quest for the new:

Contrary to the predictable criticisms, the Futurist culinary revolution, illustrated in this volume, is aimed at the high end, noble and useful at all to radically change the power of our race, fortifying, dynamizing and spiritualizing it with brand new dishes in which experience, intelligence and imagination economically replace the amount, the banality, repetition and the cost. Our futuristic kitchen, set like a seaplane engine for high speeds, will seem crazy to some trembling and dangerous traditionalist. It wants to eventually create a harmony between the palate of men and their lives today and tomorrow… It is optimism at the table. 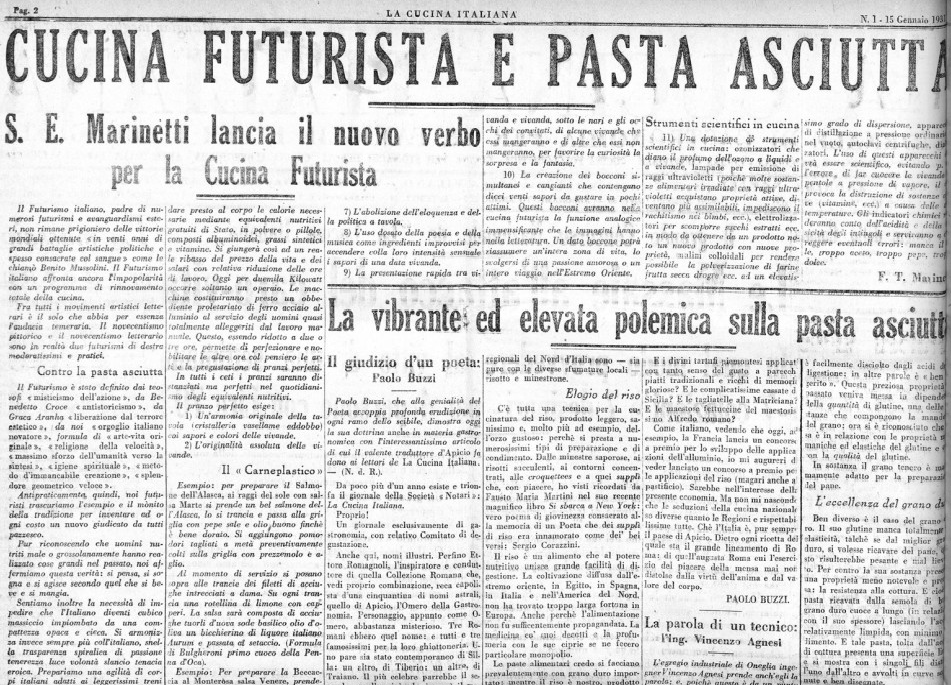 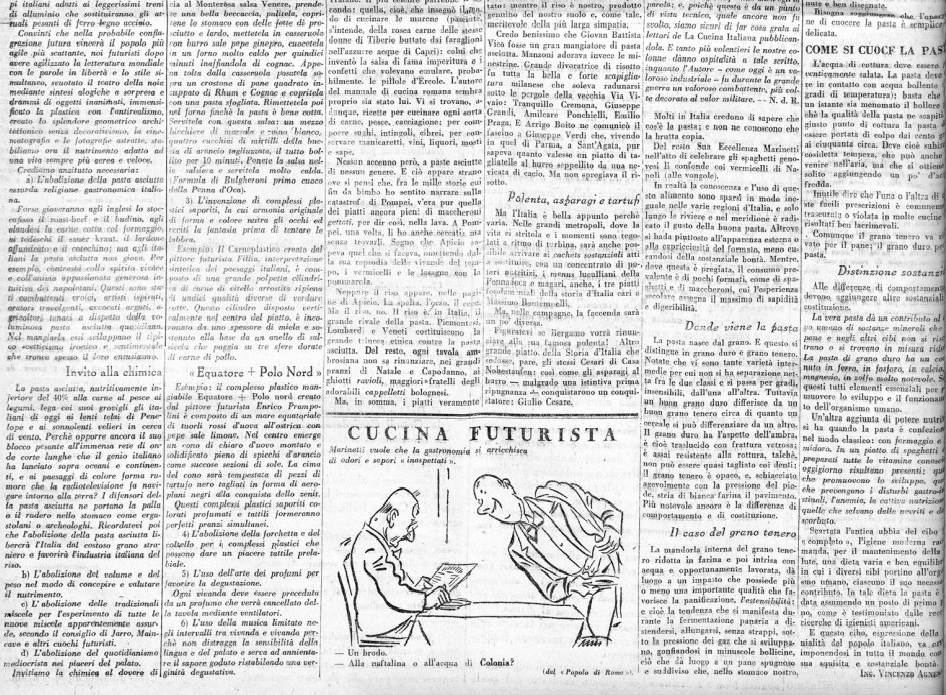 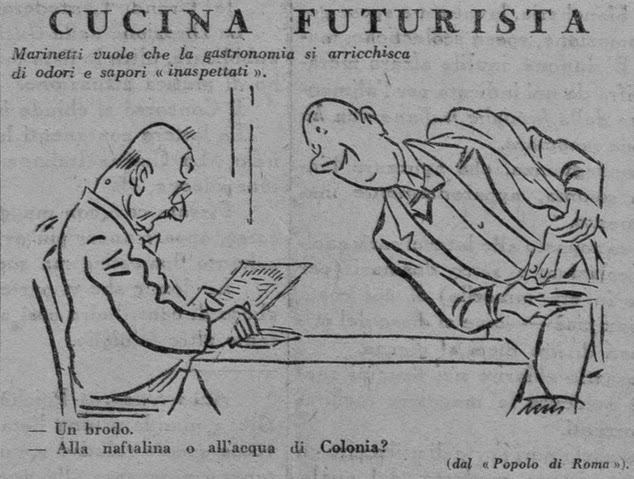 Nothing was safe. Knives and forks were same-old. The most recognisable dishes were unexciting and anti-progress. Pasta, said Marinetti, was the stuff of “sluggishness, pessimism, nostalgic inactivity, and neutralism”. He writes:

Futurist cooking will be free of the old obsessions with volume and weight and will have as one of its principles the abolition of pastasciutta. Pastasciutta, however agreeable to the palate, is a passéist food because it makes people heavy, brutish, deludes them into thinking it is nutritious, makes them skeptical, slow, pessimistic.

[Pasta] is completely hostile to the vivacious spirit and passionate, generous, intuitive soul of the Neapolitans. If these people have been heroic fighters, inspired artists, awe-inspiring orators, shrewd lawyers, tenacious farmers it was in spite of their voluminous daily plate of pasta. When they eat it they develop that typical ironic and sentimental skepticism which can often cut short their enthusiasm.

Any pastascuittist who honestly examines his conscience at the moment he ingurgitates his biquotidian pyramid of pasta will find within the gloomy satisfaction of stopping up a black hole. This voracious hole is an incurable sadness of his. He may delude himself, but nothing can fill it. Only a Futurist meal can lift his spirits. 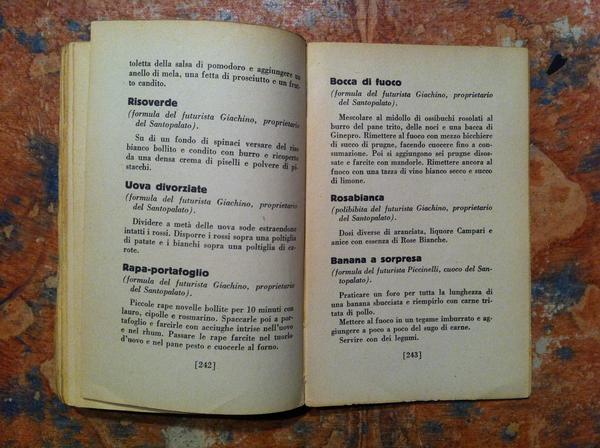 Marinetti’s book was a political manifesto – a “vision of how food could be brought into art as a building material and a source of shape and colour”.

The Futurist kitchen Marinetti envisioned was an extension of his proto-bro obsessions with cars and guns and airplanes. Countertops would be lined with ozonizers, ultra-violet ray lamps, electrolyzers and colloidal mills, the cutting board jockeying for space with centrifugal autoclaves and dialyzers. The electrolyzer would be employed “to decompose juices and extracts, etc. in such a way as to obtain from a known product a new product with new properties.”

All of this decades before Pacojets and immersion circulators and iSi siphons would become fetish objects of the kitchen. Marinetti’s kitchen, more a vision than a reality, was really a list of possibilities rather than detailed uses. The technology could be employed to improve nourishment (Marinetti was obsessed with nutrition and, along with his anti-pasta vitriol, rails in the cookbook against processed grains, eating too much meat, and robbing vegetables of their healthfulness by overcooking) or to perfectly balance acidity and alkalinity, salt and heat. Less practical electric dreams include Marinetti’s desire to make foods taste and smell of ozone, or to run drugs through that colloidal mill. 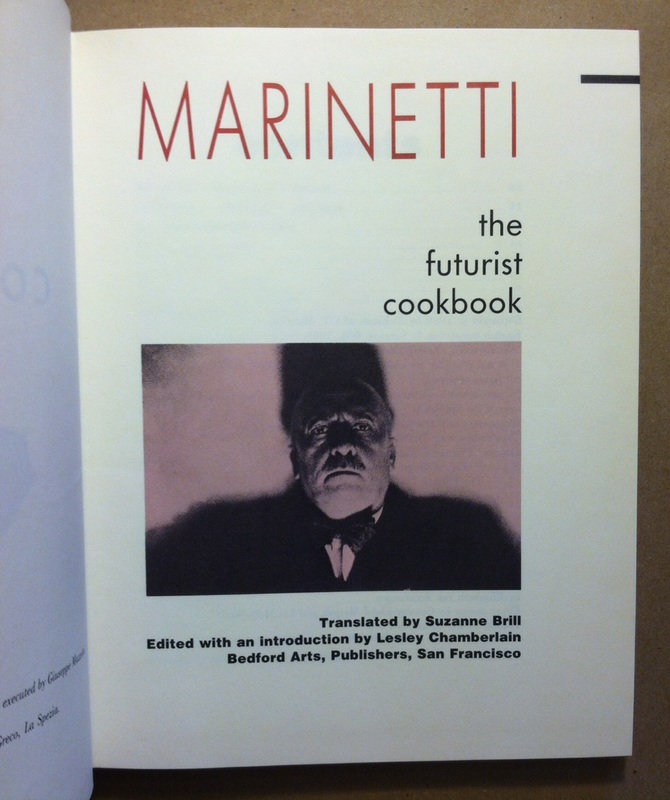 It all sounds not a little ridiculous, a nod to fads and modish eating. Suzanne Brill notes:

Futurist food was full of suggestiveness and provocation. Sex was one topic, the thrill of air travel another. Along with recipes for “Sculpted Meat” and “Man-and-Woman-at-Midnight” came whole scenarios for acting out themed meals while sitting in a biplane. The art chefs of our day, Heston Blumenthal and Ferran Adrià, surely perpetuate what Marinetti began. 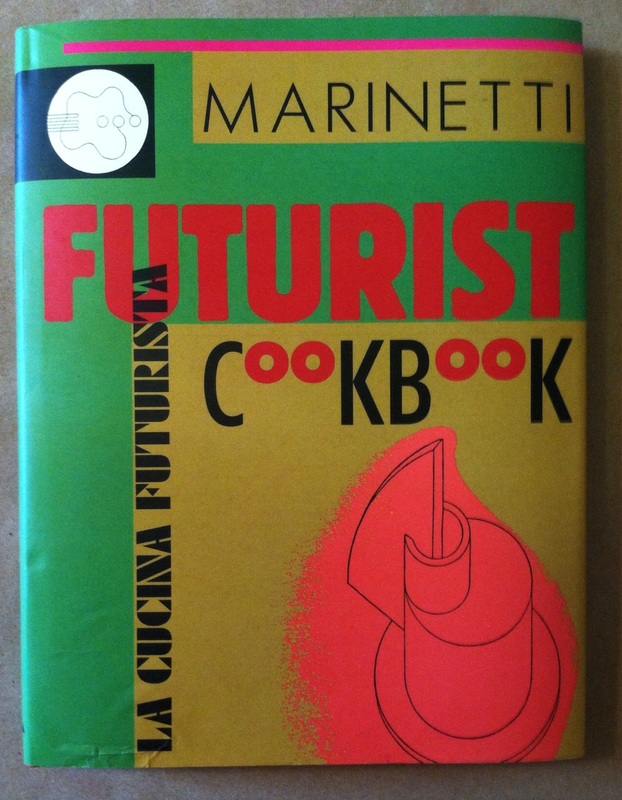 Maria Popova pays tribute to Marinetti’s skills as a parodist. The “cookbook was arguably the greatest artistic prank of the twentieth century”.  As Josh Jones notes, “In an introduction to the 1989 edition, British journalist and historian Lesley Chamberlain called the Futurist Cookbook ‘a serious joke, revolutionary in the first instance because it overturned with ribald laughter everything food and cookbooks held sacred’.”

Marinetti first swept away tradition in favor of creative dining events the Futurists called “aerobanquets,” such as one in Bologna in 1931 with a table shaped like an airplane and dishes called “spicy airport” (Olivier salad) and “rising thunder” (orange risotto). Lambrusco wine was served in gas cans.

It was tried and tested stuff. As TSS adds:

His oddball cuisine debuted in the first (and only) Futurist restaurant, in 1929 Turin – an angular, alumina-plated interior called La Taverna del Santopalato, or Tavern of the Holy Palate [images below]. It was an event Marinetti considered on a par with the discovery of America and the fall of the Bastille (“the first human way of eating is born!”) 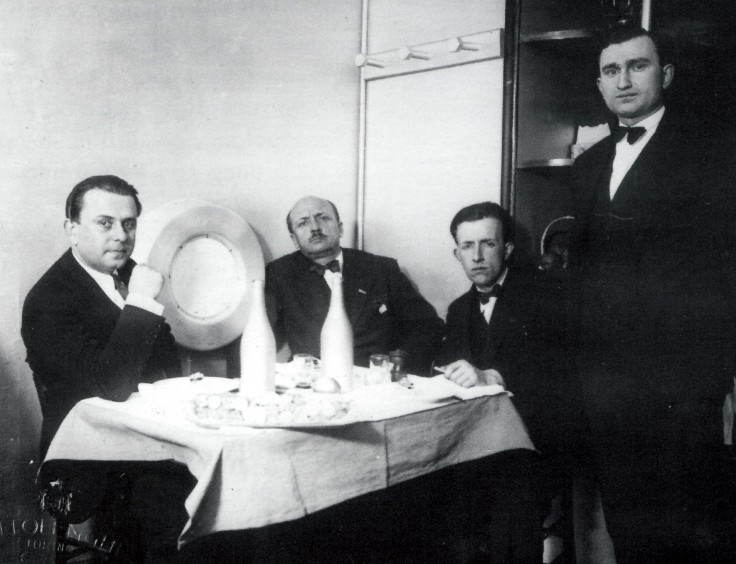 Interior Taverna del Santo Palate, in Turin, in Vanchiglia 2: with (from left) the Bulgarian architect Nicolaj Diulgheroff, who rebuilt the place, the poet Filippo Tommaso Marinetti and the painter Fillia, alias Louis Columbus 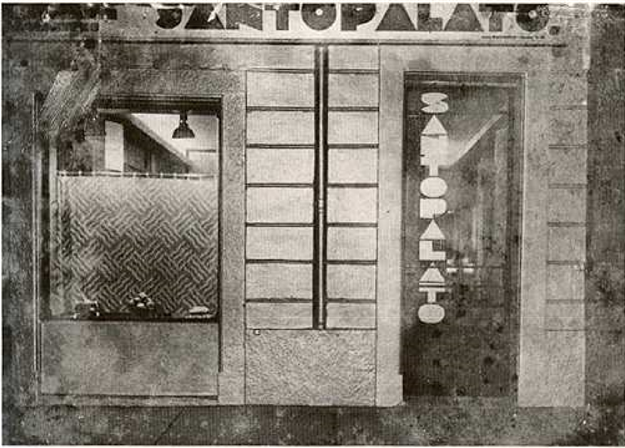 Illustrations on the Santopalato restaurant menu 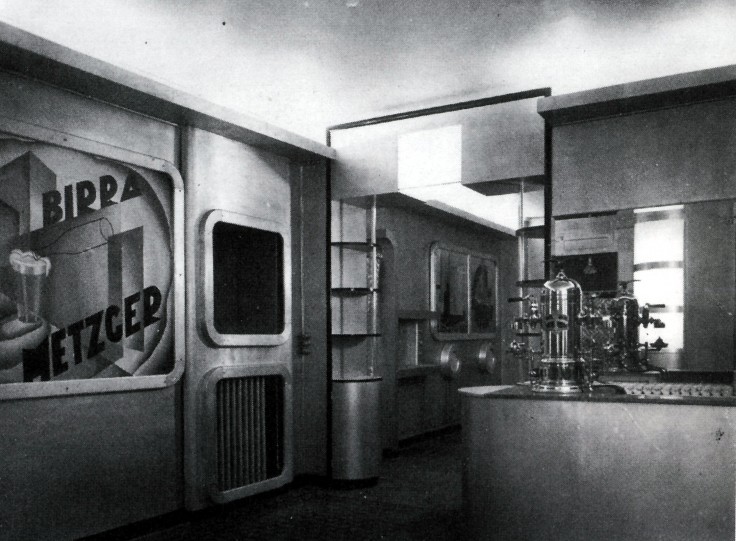 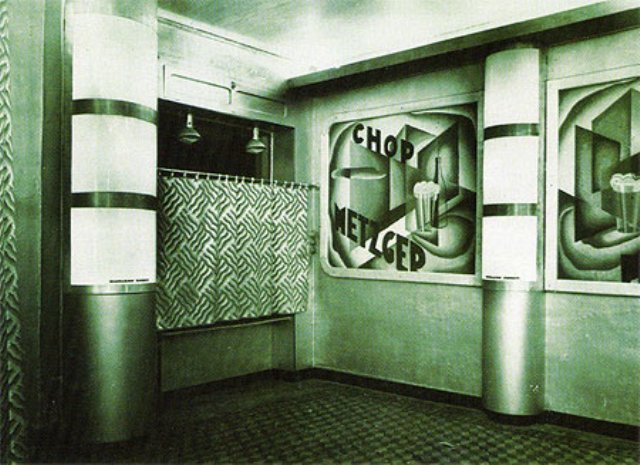 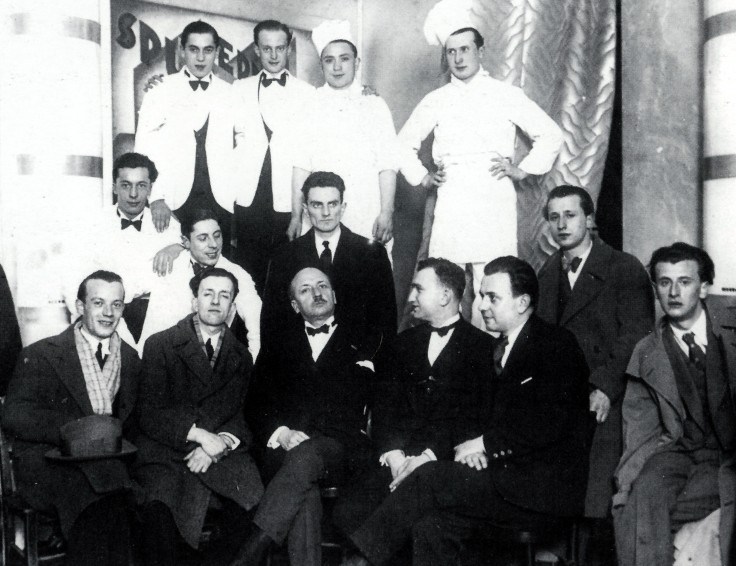 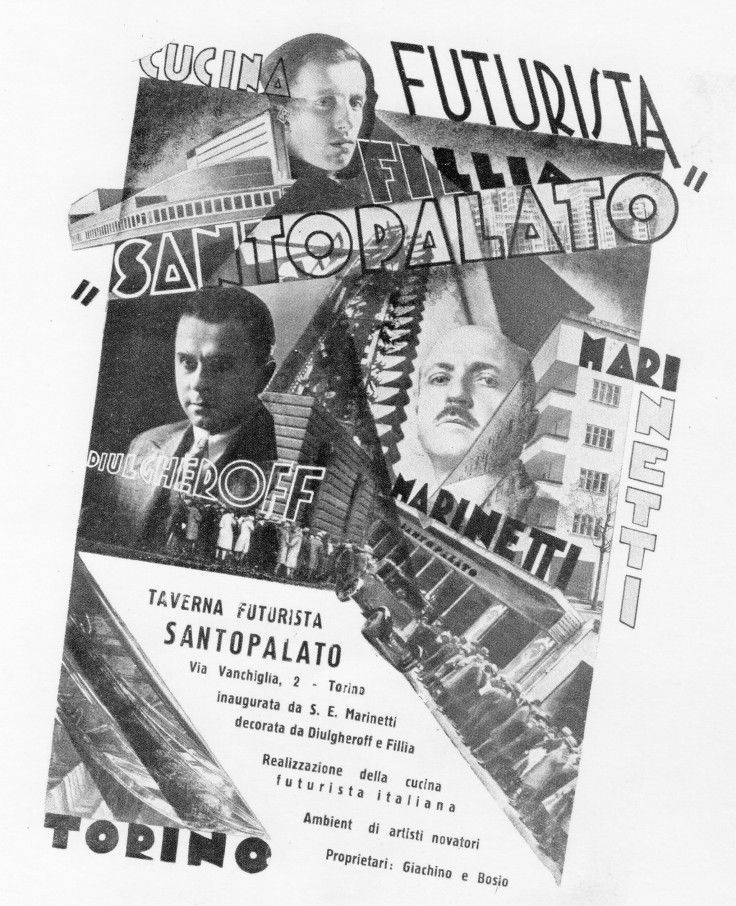 Dishes included in the cookbook include:

Aerofood: A signature Futurist dish, with a strong tactile element. Pieces of olive, fennel, and kumquat are eaten with the right hand while the left hand caresses various swatches of sandpaper, velvet, and silk. At the same time, the diner is blasted with a giant fan (preferable an airplane propeller) and nimble waiters spray him with the scent of carnation, all to the strains of a Wagner opera. (“Astonishing results,” Marinetti says. “Test them and see.”)

Taste Buds Take Off: A soup of concentrated meat stock, champagne, and grappa, garnished with rose petals — “a masterpiece of brothy lyricism.”

Italian Breasts in the Sunshine: Two half spheres of almond paste, with a fresh strawberry at the center or each, sprinkled with black pepper.

Chicken Fiat: A chicken is roasted with a handful of ball bearings inside. “When the flesh has fully absorbed the flavor of the mild steel balls, the chicken is served with a garnish of whipped cream.”

Beautiful Nude Food Portrait: A crystal bowl filled with fresh milk and the flesh of two boiled capons, all scattered with violet petals.

Equator + North Pole: “An equatorial sea of golden poached egg yokes” surrounds a cone made of whipped egg whites. This is “dotted with orange segments like succulent pieces of the sun” and black truffle carved to look like airplanes.

The Excited Pig: A “whole salami, skinned” is cooked in strong espresso coffee and flavored with eau-de-cologne.

You could go further and recreate not just one dish but FT Marinetti’s Rules for the Perfect Lunch:

1. An original harmony of the table (crystal ware, crockery and glassware, decoration) with the flavors and colors of the dishes.

2. Utter originality in the dishes.

3. The invention of flexible flavorful combinations (edible plastic complex), whose original harmony of form and color feeds the eyes and awakens the imagination before tempting the lips.

4. The abolition of knife and fork in favor of flexible combinations that can deliver prelabial tactile enjoyment.

5. The use of the art of perfumery to enhance taste. Each dish must be preceded by a perfume that will be removed from the table using fans.

6. A limited use of music in the intervals between one dish and the next, so as not to distract the sensitivity of the tongue and the palate and serves to eliminate the flavor enjoyed, restoring a clean slate for tasting.

7. Abolition of oratory and politics at the table.

8. Measured use of poetry and music as unexpected ingredients to awaken the flavors of a given dish with their sensual intensity.

9. Rapid presentation between one dish and the next, before the nostrils and the eyes of the dinner guests, of the few dishes that they will eat, and others that they will not, to facilitate curiosity, surprise, and imagination.

10. The creation of simultaneous and changing morsels that contain ten, twenty flavors to be tasted in a few moments. These morsels will also serve the analog function […] of summarizing an entire area of life, the course of a love affair, or an entire voyage to the Far East.

11. A supply of scientific tools in the kitchen: ozone machines that will impart the scent of ozone to liquids and dishes; lamps to emit ultraviolet rays; electrolyzers to decompose extracted juices etc. in order to use a known product to achieve a new product with new properties; colloidal mills that can be used to pulverize flours, dried fruit and nuts, spices, etc.; distilling devices using ordinary pressure or a vacuum, centrifuge autoclaves, dialysis machines.

The use of this equipment must be scientific, avoiding the error of allowing dishes to cook in steam pressure cookers, which leads to the destruction of active substances (vitamins, etc.) due to the high temperatures. Chemical indicators will check if the sauce is acidic or basic and will serve to correct any errors that may occur: lack of salt, too much vinegar, too much pepper, too sweet.”

All achingly original, then? No, not exactly. The January 1, 1913, issue of French satirical magazine Fantasio introduced readers to “Cubisme Culinaire”, a manifesto written by Guillaume Apollinaire to consecrate the inspired meeting of avant-garde art and gastronomy.

The best satire is closest to the truth, and in September 1913 French chef Jules Maincave gave full throat to his “Manifesto of Futurist cuisine” in the same publication. Said Maincave:

“The art of cooking is still centred on the same dozen or so pitifully overworked recipes. The same dishes continue to make the rounds of our tables and are merely christened and rechristened time and time again with high-sounding names we hope will disguise their mediocre uniformity. For three centuries now, no truly has been presented to the world. ” 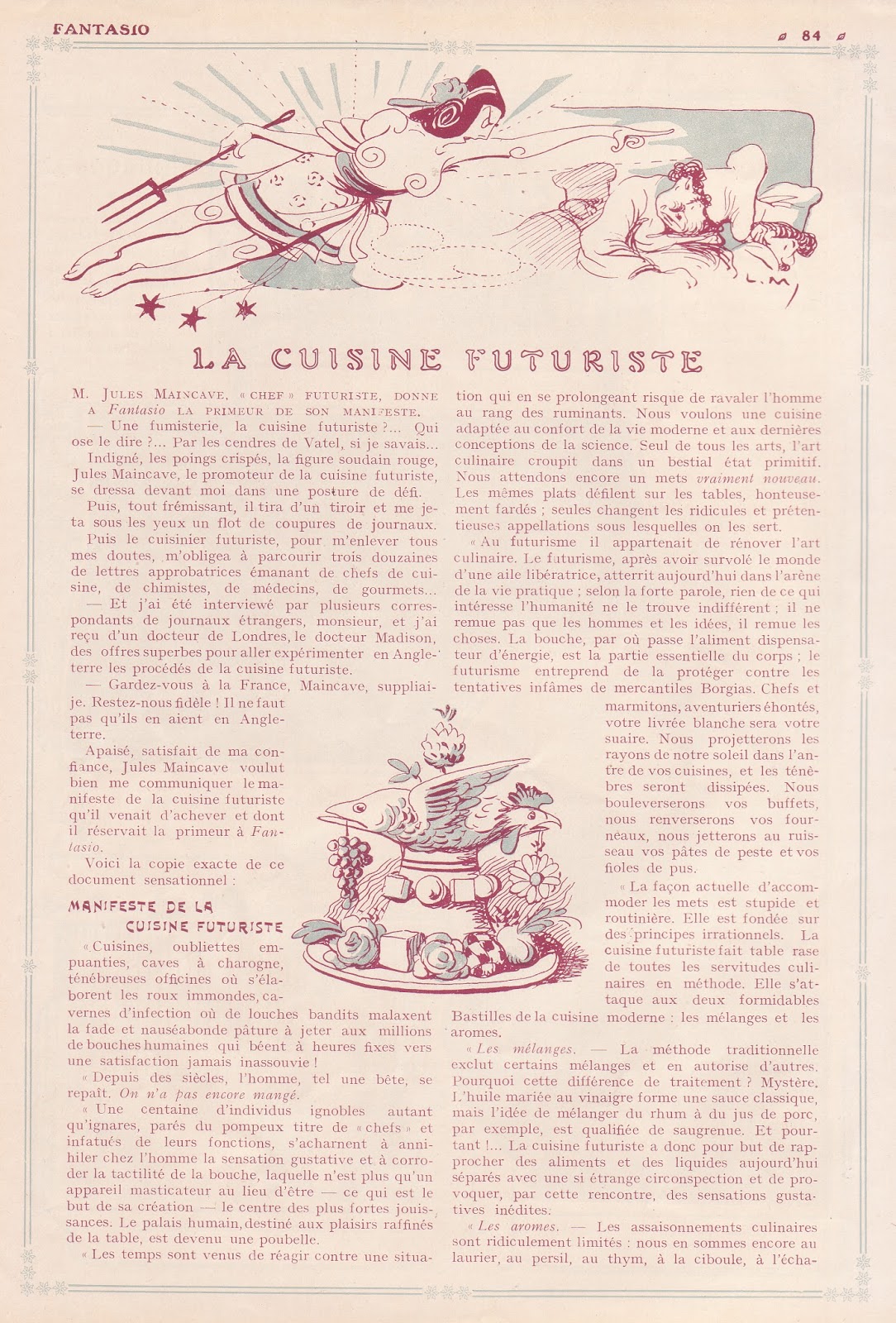 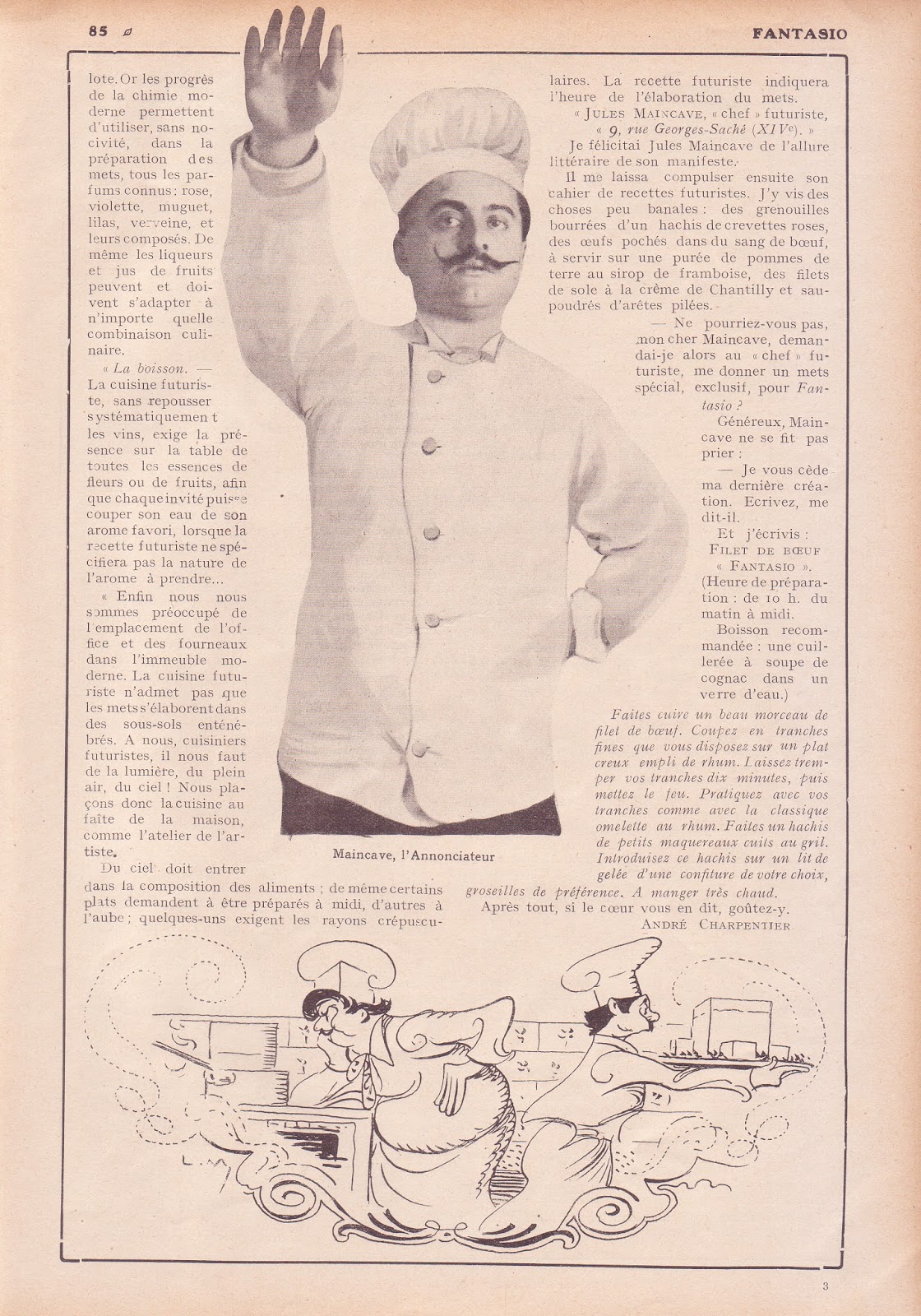 The story was translated into Italian and published in 1914 under the title “the Futurist cook – Jules Maincave interviewed by journalist André Charpentier” in the August issue of Blue Gazzettino magazine. 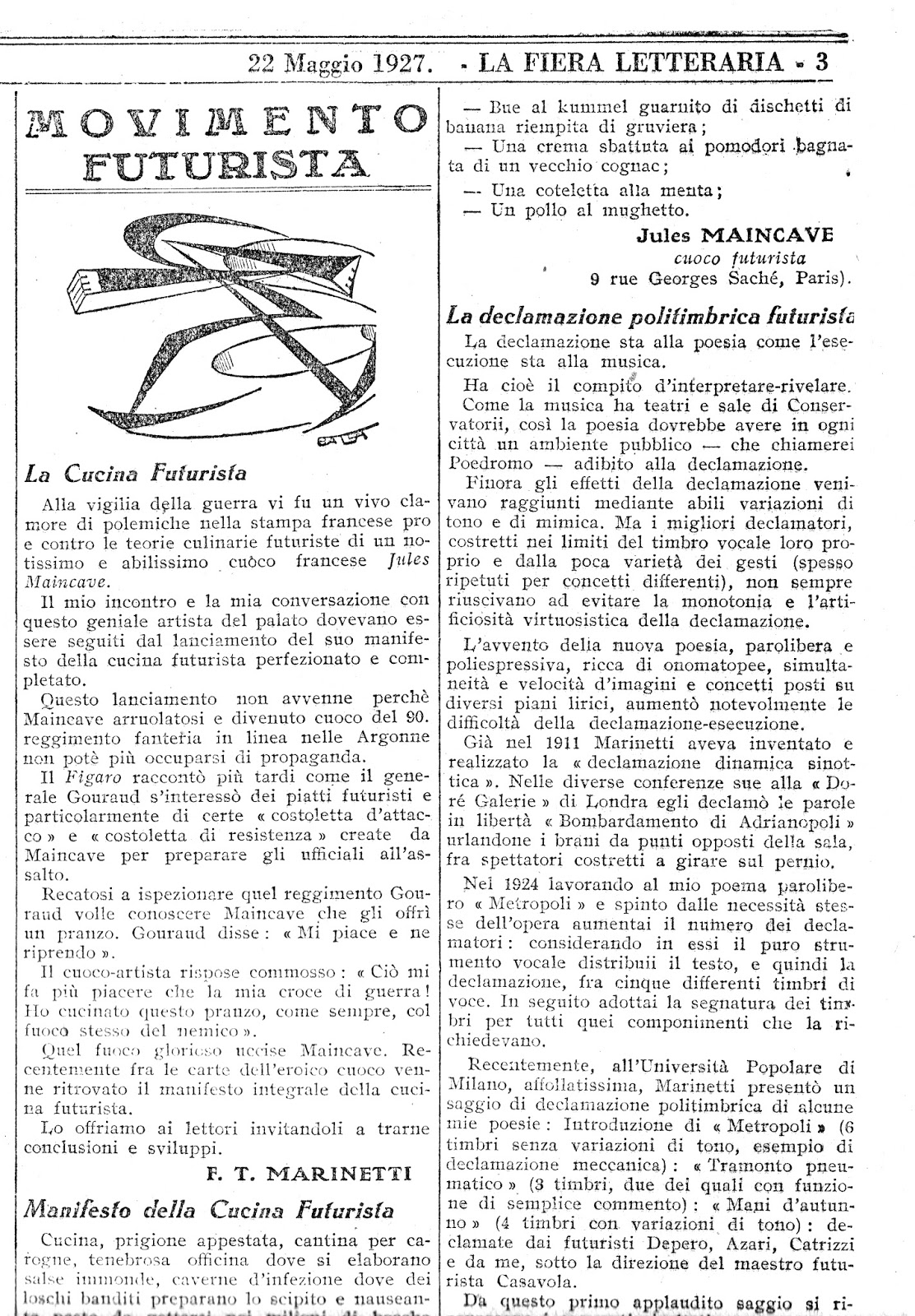 “Chefs and scullions, shameless adventures, your white livery will be your shroud!” Maincave wrote in his Manifeste Cuisine Futuriste. “We shall send forth the rays of our sunshine into the lairs of your kitchens and the gloom will vanish. We shall overturn your buffet tables! We shall pull down your ovens! We shall throw your plague-ridden pastries and pus-filled phials into the river!”

Huzzah! Now, then, who fancies some toast and butter? 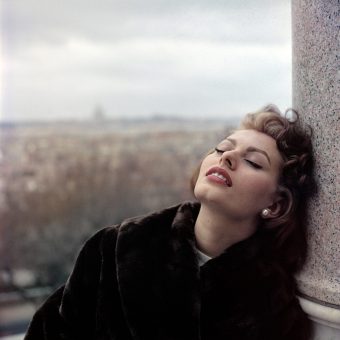