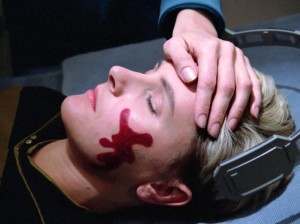 WILLIAM Shakespeare once wrote that “the valiant taste of death but once,” while cowards die “many times” before their actual demise.

Audiences of cult TV classics might also be said to die many times too, especially if they watch and re-watch beloved characters die in their favorite genre programming.

Over the years, a number of beloved series characters have been unceremoniously offed by series writers, only to leave grieving audiences in shock at their passing.

At least for the most part, these characters died heroically –or valiantly — though that was not always the case, either.

Sometimes, prominent characters deaths prove so shocking because they occur within no larger heroic or meaningful context…and seem — like life itself — utterly random.

Listed below are five examples of the most shocking character deaths in cult-tv history. 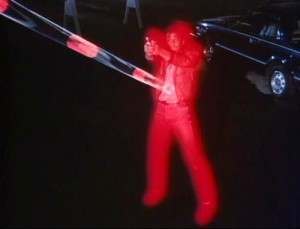 The fast-talking, street-savvy and resourceful Elias first appeared in the original V (1983) miniseries from Kenneth Johnson, and then returned for V: The Final Battle (1984) and the follow-up weekly series.

A dedicated member of the Resistance, Elias had become one of the franchise’s most familiar faces. And throughout the first part of the weekly series, his restaurant and bar, the Club Creole, was the secret base of the L.A. Resistance.

But then, in an episode titled “The Hero,” it all ends for poor Elias.

While trying to rescue Robin Maxwell (Blair Tefkin), he steps out onto a dark street to confront a Visitor gun tower…and is promptly annihilated by Diana’s (Jane Badler) new weapon: a disintegrator.

One moment Elias is there, the next he is gone.

Although Elias himself had noted a few episodes earlier (in “The Overlord”) that no one had much time left in “this business,” meaning the Resistance, few fans thought the comment would apply to the speaker himself.

In truth, the notorious “cast massacre” was coming to V: The Series in order to cut costs for the final third of the one and only season. The open city’s strong-man, Nathan Bates (Lane Smith) was also going to die, and Ham Tyler (Michael Ironside) and Robin Maxwell (Blair Tefkin) would be going off to fight the Visitors on another front, in another city.

But the first shot that rang out had Elias’s name on it, and the brave, long-lived resistance fighter was gone in the blink of an eye. 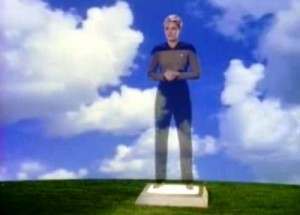 Technically, the death of the Enterprise’s Security Chief, Tasha Yar wasn’t really a surprise.  The genre press (and TV Guide) had already reported that the actress, Denise Crosby, was leaving Star Trek: The Next Generation and that her young character was fated to die.

What was surprising — and shocking even — was the violent nature and unexpected timing of Tasha’s demise.

After joining an Away Team on a mission to rescue a downed shuttle with Counselor Troi (Marina Sirtis) aboard, Tasha was blasted — without reason or motive — by a living oil slick entity called Armus.

A minute later Tasha expired on Dr. Crusher’s sickbay operating table.  There was nothing even 24th century medicine could do to save her.

It was all over in the blink of an eye, and noble Tasha didn’t even get a lot of screen-time in her last episode, or the dignity of heroically completing her rescue mission.  Instead, Tasha beamed down, got shot, and that was the end of it.

Five minutes in, the suspense was over. And audiences were stunned.

But “Skin of Evil,” in its last act, depicts the command crew of the Enterprise attending Tasha’s funeral, and attempting to come to grips with her loss.

If you were a Star Trek fan in 1988, you were doing the same thing.

There was not a dry eye in the galaxy. 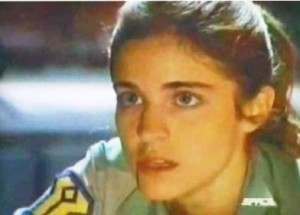 In the season (and series…) finale of the post-apocalyptic Captain Power and the Soldiers of the Future, the beautiful and heroic Pilot is left in a tough spot.

The Resistance Headquarters has been invaded by a squadron of soldiers and a fearsome Bio Dread robot. Pilot sets the base itself to “auto destruct,” and attempts to flee to safety, but is gunned down — shot in the back — by the Bio Dread and left “broken up inside.”

When the auto-destruct sequence is aborted, the mortally-wounded Chase opts to remain and blow up the base’s power source herself.  She ends the threat to the Resistance…and her own life at the same time.

Although the story-telling on this series was actually quite mature, Captain Power was often termed a “kid’s” series because of all the “interactive” toys made for the program.  Thus it was an incredible shock to the system when the courageous and competent Pilot — perhaps the most popular character on the show — laid down her life to save her friends and the cause itself. 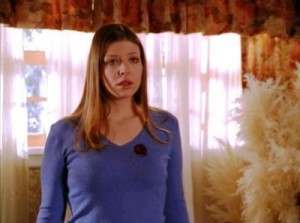 Throughout most of its seven seasons on the air, Buffy the Vampire Slayer dealt with supernatural villains or menaces.  But during the memorable sixth season of the season, the Chosen One (Sarah Michelle Gellar) grappled with a trio of geeks: normal kids who re-conceived and re-imagined themselves as dangerous super-villains.

Most of their plans for world domination were silly and doomed to fail — freeze rays, invisibility rays and the like — but the final gambit of their leader, Warren Mears (Adam Busch) was unforgettable.  He picked up a loaded gun, went to Buffy’s house, and attempted to kill her at point blank range.  She survived his fierce attack, but a stray bullet hit Willow’s (Alyson Hannigan) love Tara, inside the house.

A bloody wound on her chest, Tara died before she even knew what hit her.

It has widely been reported that Tara’s death was crucial for the development of Willow’s character. Tara’s death gave the writers the opportunity to show the witch going “dark” in a terrifying and very human way way.  But “Seeing Red” accomplished something else too.

Tara’s death reminded viewers that real life could be a hell of a lot scarier than any supernatural monsters, and that a loaded gun could kill just as effectively — if not more so — than any mythical creature of the night.

The “Big Bad” of Buffy’s Season Six was “real life,” and Tara’s death under totally human auspices proves that point beautifully, if tragically. 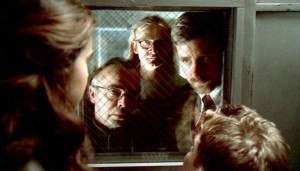 The Lone Gunmen’s geek/nerd banter, their conspiracy-minded bent, and their vocal and enduring sexual desire for Agent Scully (Gillian Anderson) all provided needed laughs during many moments of seriousness and horror.   The Lone Gunmen were brilliant, but also harmless, and so it seemed that no harm should come to them.

At one point, The Lone Gunmen even got their own (short-lived) series.  Like Mulder and Scully, they had become more than just players in an ongoing drama, but had reached the status of beloved, pop culture icons.

So it was with tremendous shock that X-Files fans countenanced “Jump the Shark,” an episode late in the ninth and final season which saw the Lone Gunmen heroically give their lives to stop a deadly virus that had been developed by a bio-terrorist.

To lose them right at the end was a punch to the gut, and one that set up the series finale brilliantly.  All bets were off.

Recently the Lone Gunmen have returned, however, in the Season 10 X-Files comic-book.

But for a decade or so, it was almost impossible to reckon with the fact that The X-Files’ most beloved figures of fun had been killed off so brutally.