Sexual innuendo in advertising doesn’t get any more textbook perfect than the Newport “Alive with Pleasure!” adverts that were in magazines everywhere in the 70s and 80s. Sure, they were awful to look at: a gaudy green with a seemingly amateurish photograph; however, subconscious sexualized imagery is taken to new heights in these advertisements. I’ve paged through a lot of old magazines, and I think I can say with good authority that the Newport ads are the ultimate in sexual innuendo marketing. It simply doesn’t get any better than this. Let’s take a look at why. 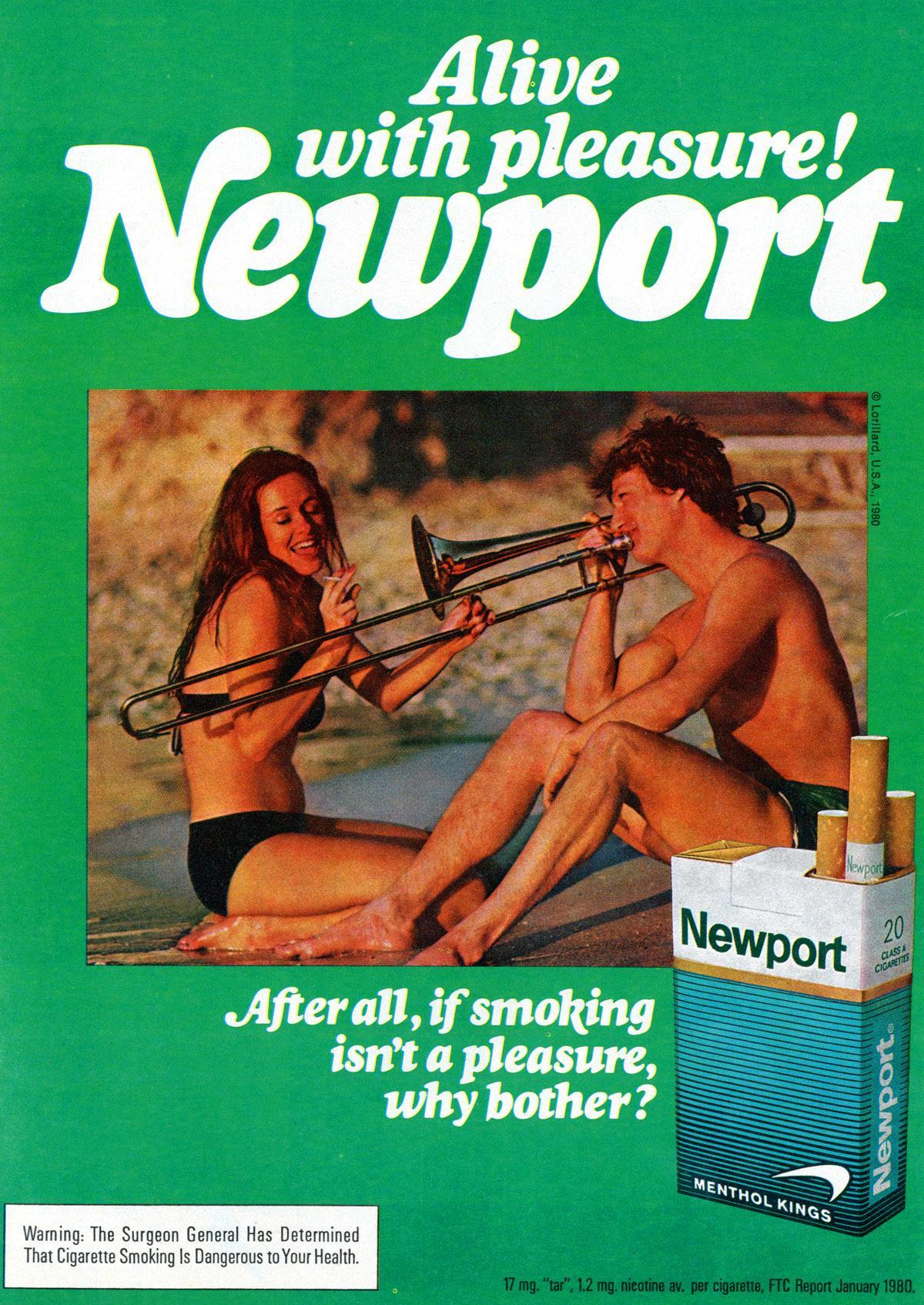 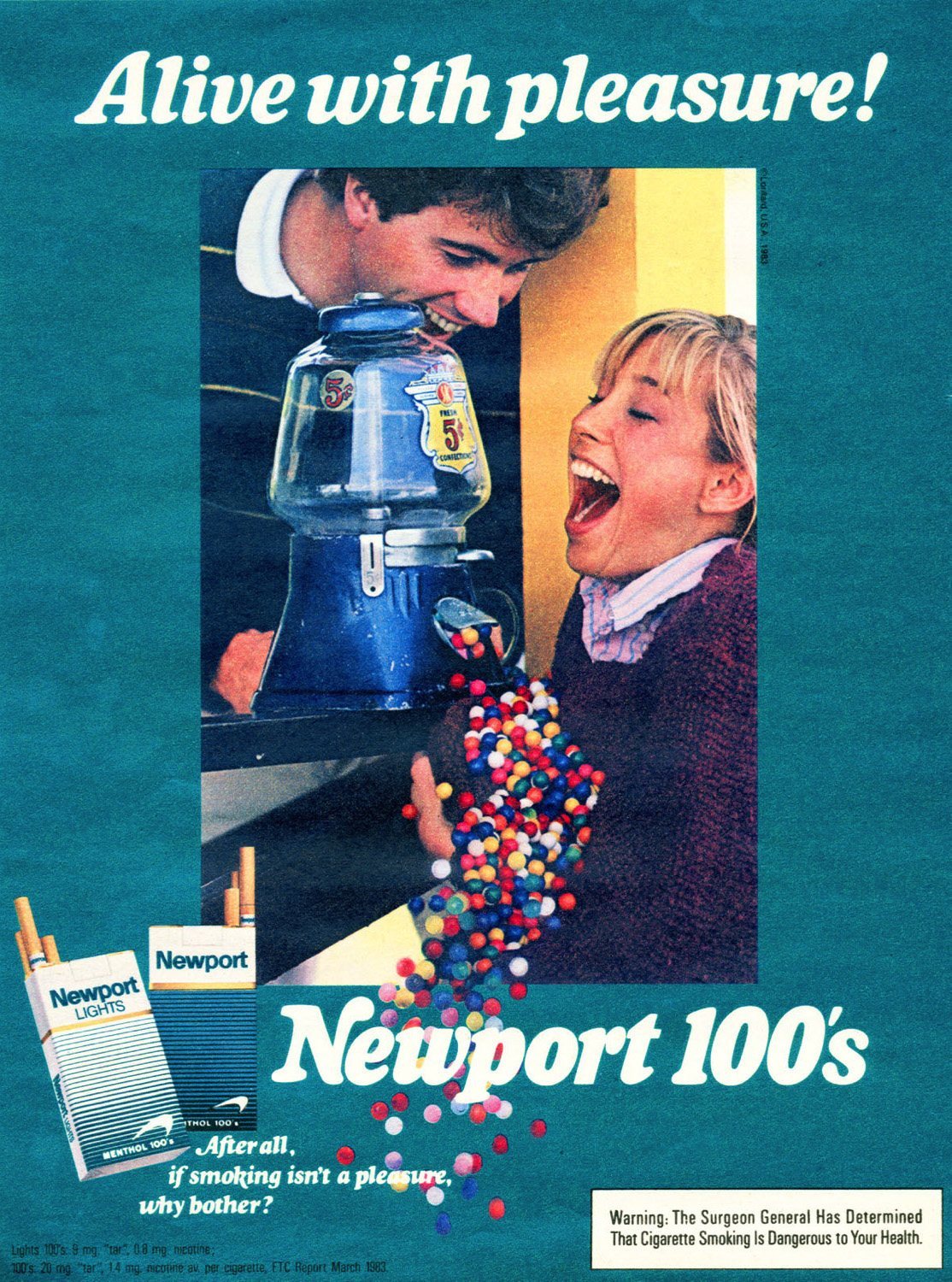 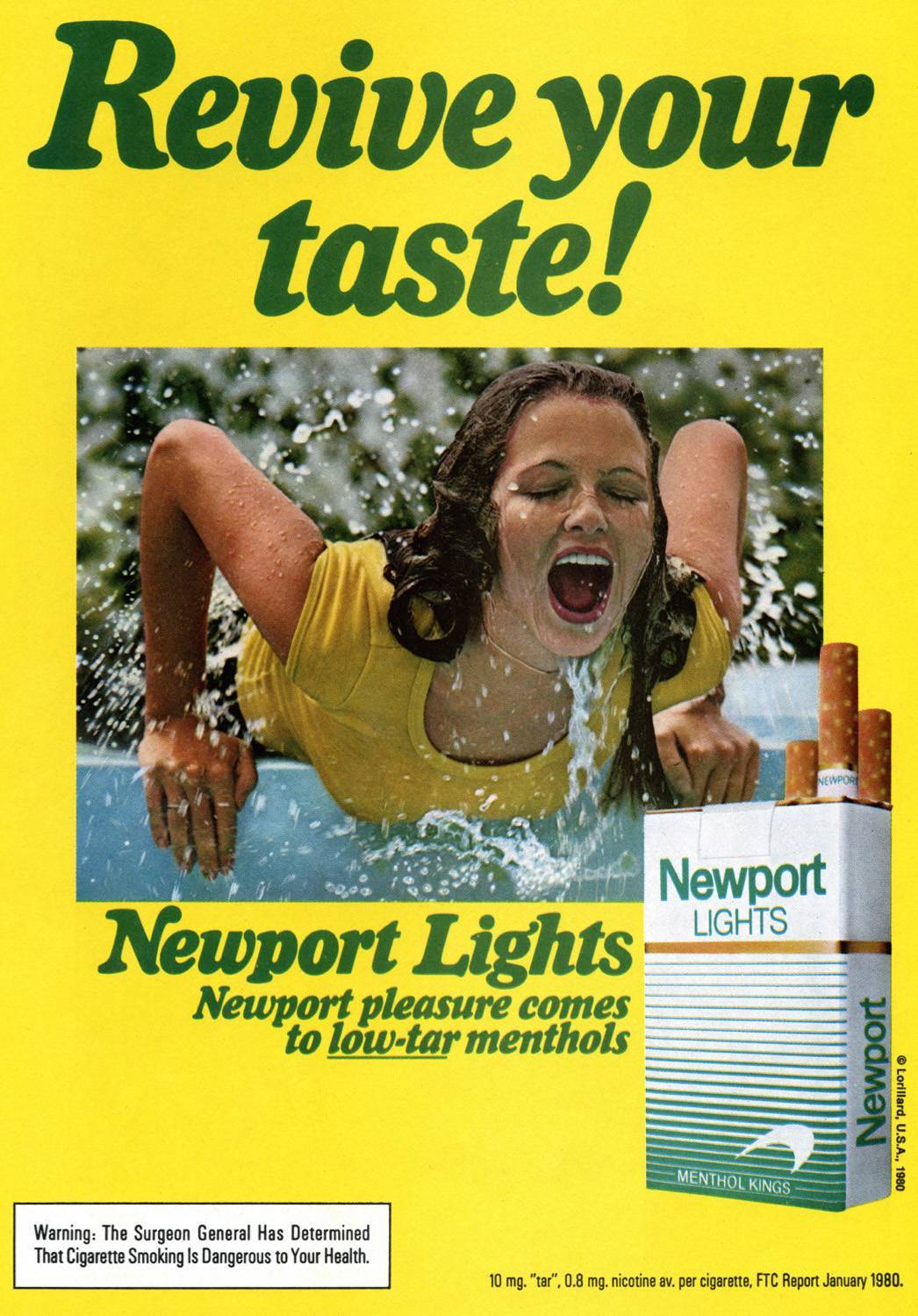 First of all, you can’t bee too obvious with your innuendo – otherwise, it ceases to be innuendo and is just blatant pandering. A naked couple having sex wouldn’t sell many cigarettes; viewers would be shocked, offended, and apply a negative connotation to the product. But if you lay it between the lines, it passes through the mind without the reader even being aware. Believe me when I tell you that the marketing execs behind the products of big cigarette companies know exactly what they’re doing.

First, you grab the reader’s attention. Brilliant green may be ugly, but you can’t blindly pass by this page… it demands your attention, even if it’s no more than a couple seconds. 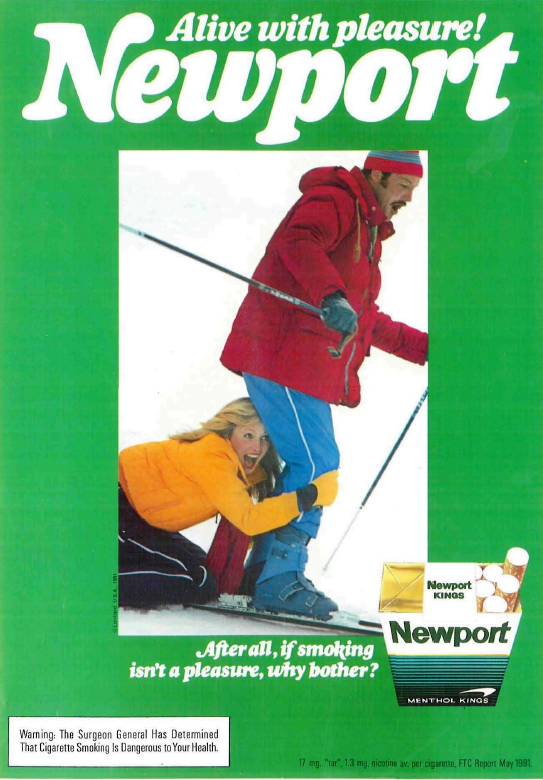 One thing the human mind associates with sex (this is proven – not a personal theory) is a certain “O face”. You’ll notice that the women in nearly every single one of these ads is clearly demonstrating the classic “O face” (orgasm face). In the example above, she’s between his legs with the O face; and he’s holding a perfectly positioned “pole”. 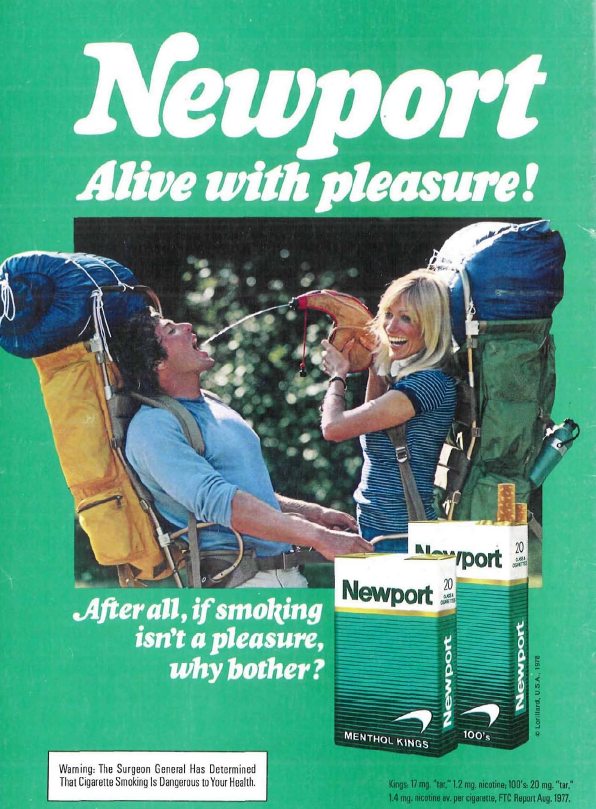 Okay, if this is for heterosexual males, why is she shooting a stream of jiz water into his mouth? Remember, these aren’t meant to be analyzed (like we’re doing). They’re meant to to be looked at for a split second. The association that’s implanted in your mind is “sex sex sex sex sex”; and sex = pleasure = Newport. 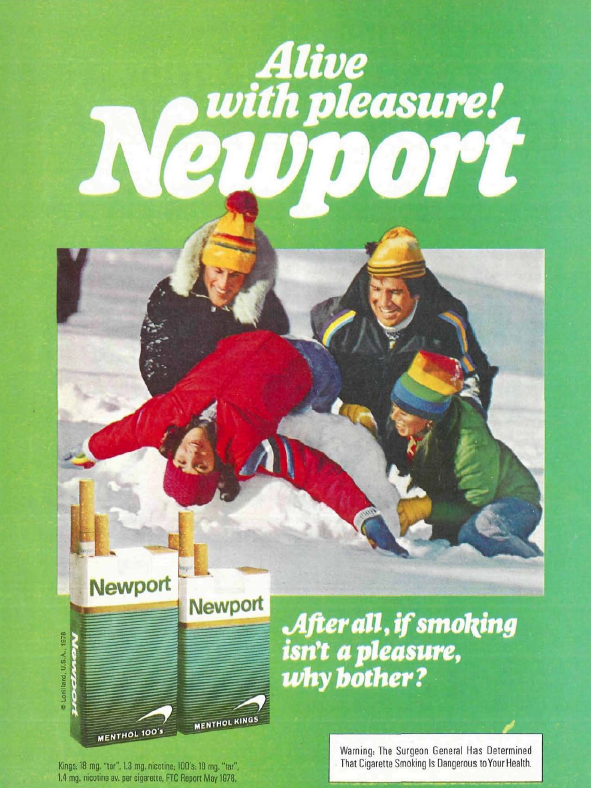 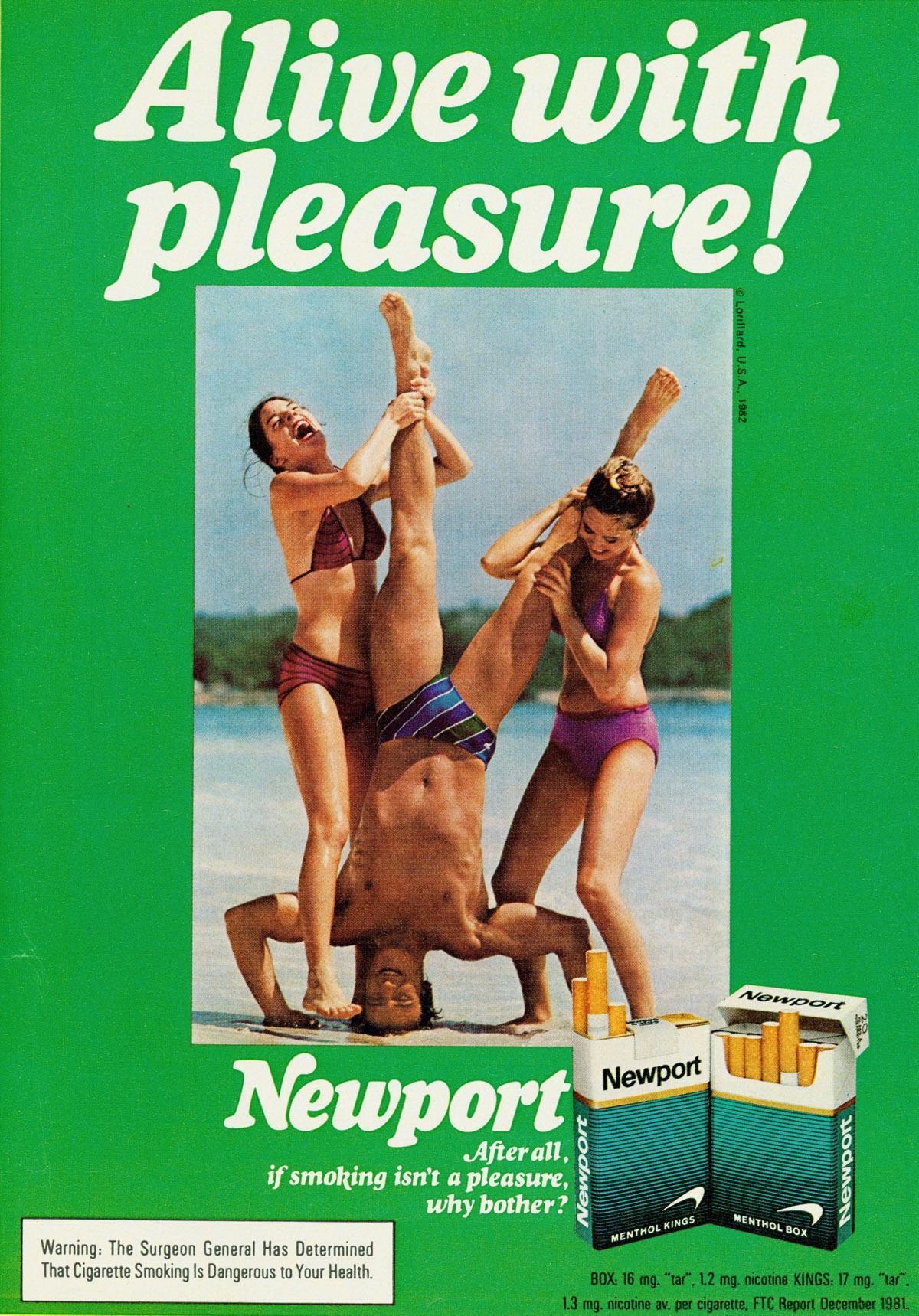 Damn! The woman on the left is certainly “alive with pleasure”! This is the O face is full effect. Take a close look at what she’s doing – she’s obviously giving his appendage a hand job. 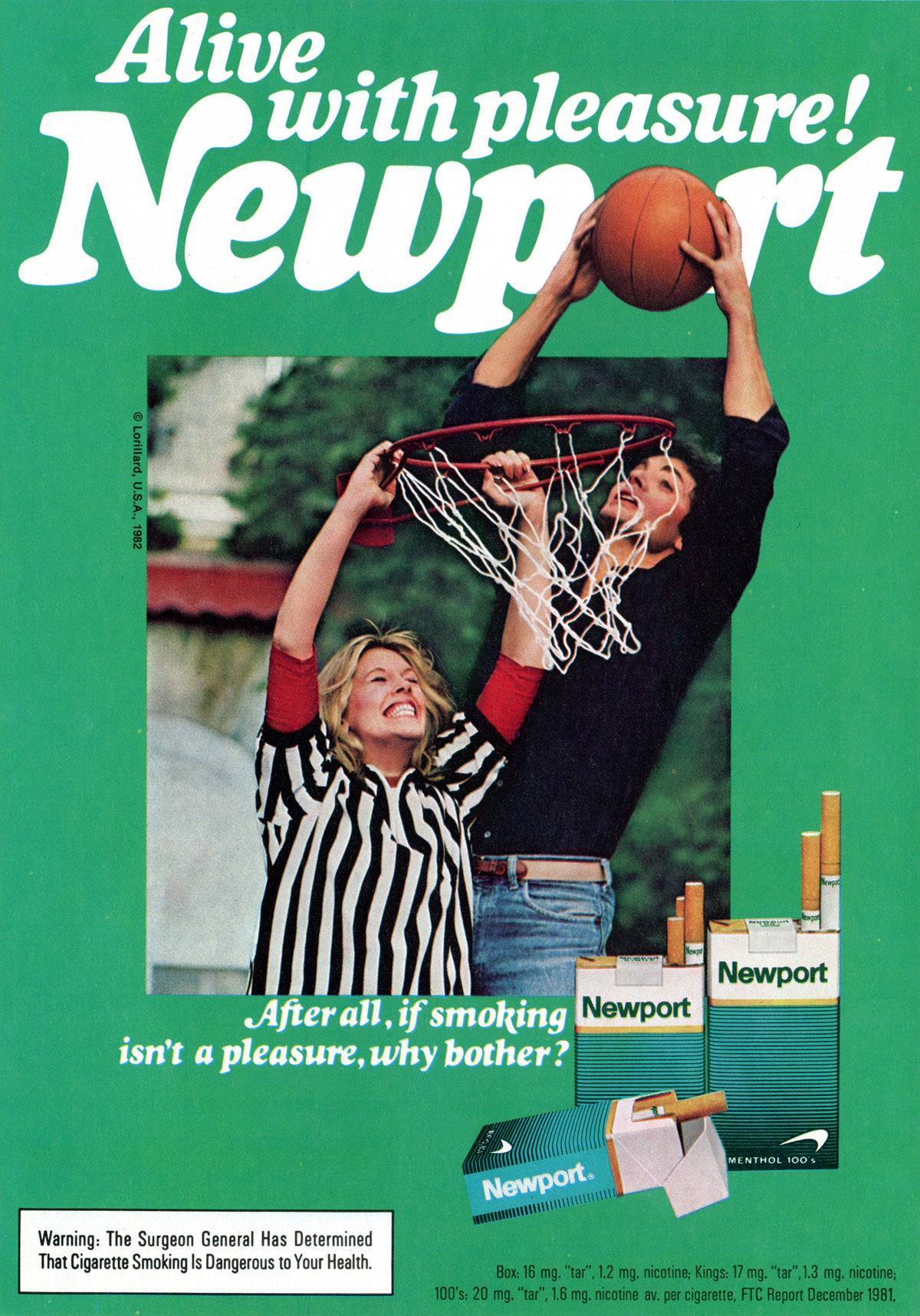 It’s been demonstrated that sex is the second strongest behind all psychological appeals. It only makes sense that advertisers would capitalize on this to move product. This woman isn’t holding on to a bed’s headboard in this photo – but she may as well be. Classic O face. Well done, Newport. Well done.

Here’s a couple more O faces for you mid-brain to enjoy. 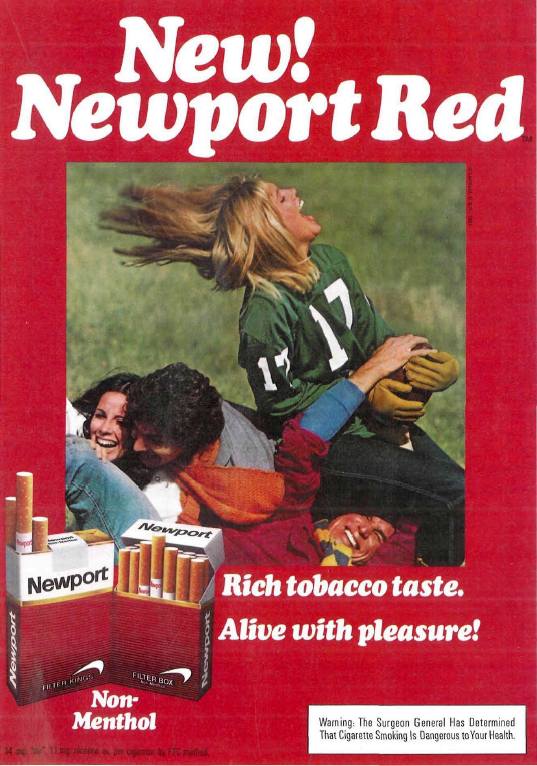 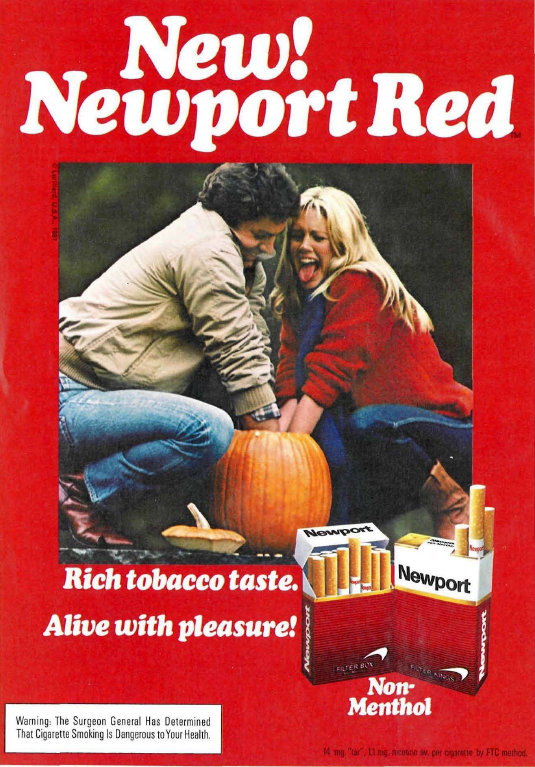 Here’s another favorite, shown below…it brings to mind a very important point: women smoke too, and these ads most definitely have BOTH genders in mind with these cleverly orchestrated sexual suggestions. 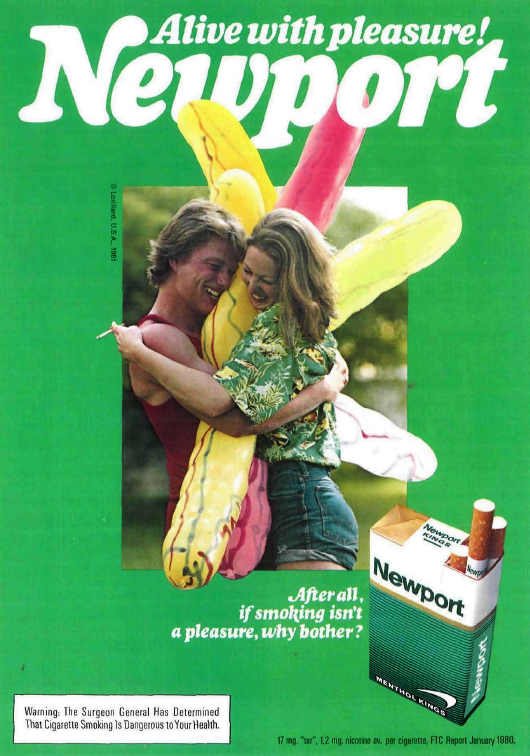 It’s been shown that most women will not respond to a blatant sex filled advertisement. It needs to be subtle and threatening to work for the majority of females. This scene is romantic, right? It’s playful – non threatening. Yet at the same time, beneath the surface, she’s embracing enormous penises. 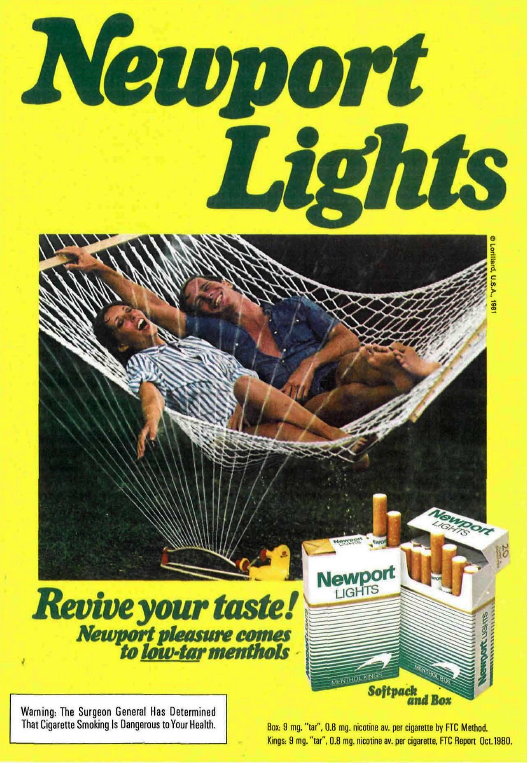 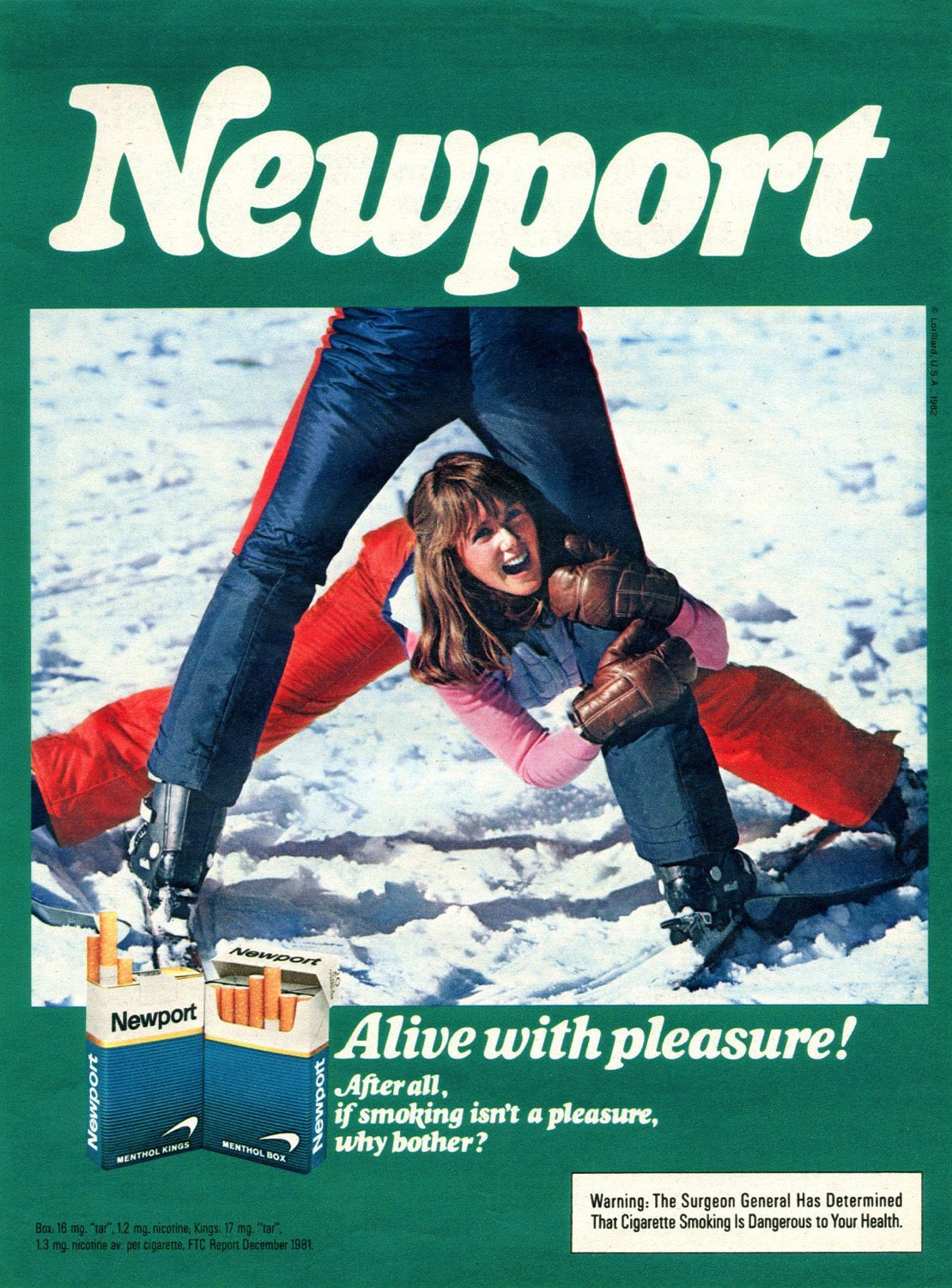 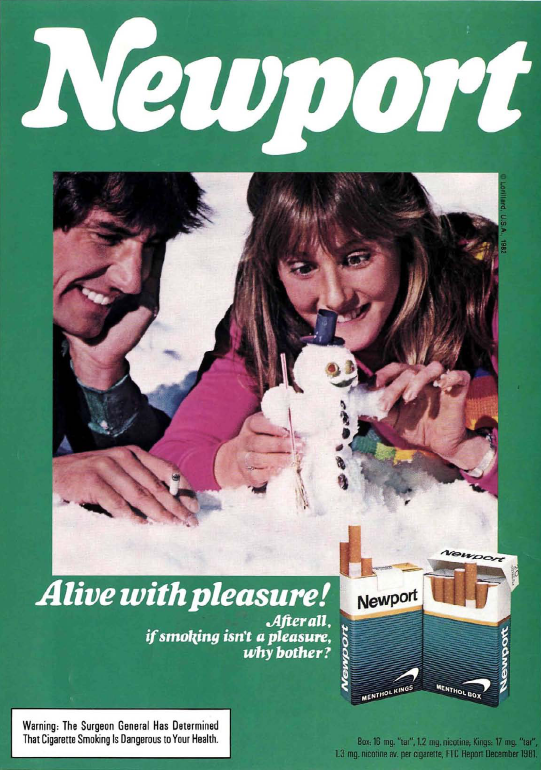 Why that’s the tiniest snowman I’ve ever seen. It’s about the size of a…. of a…. ahhhhh, Newport, you sly devil! 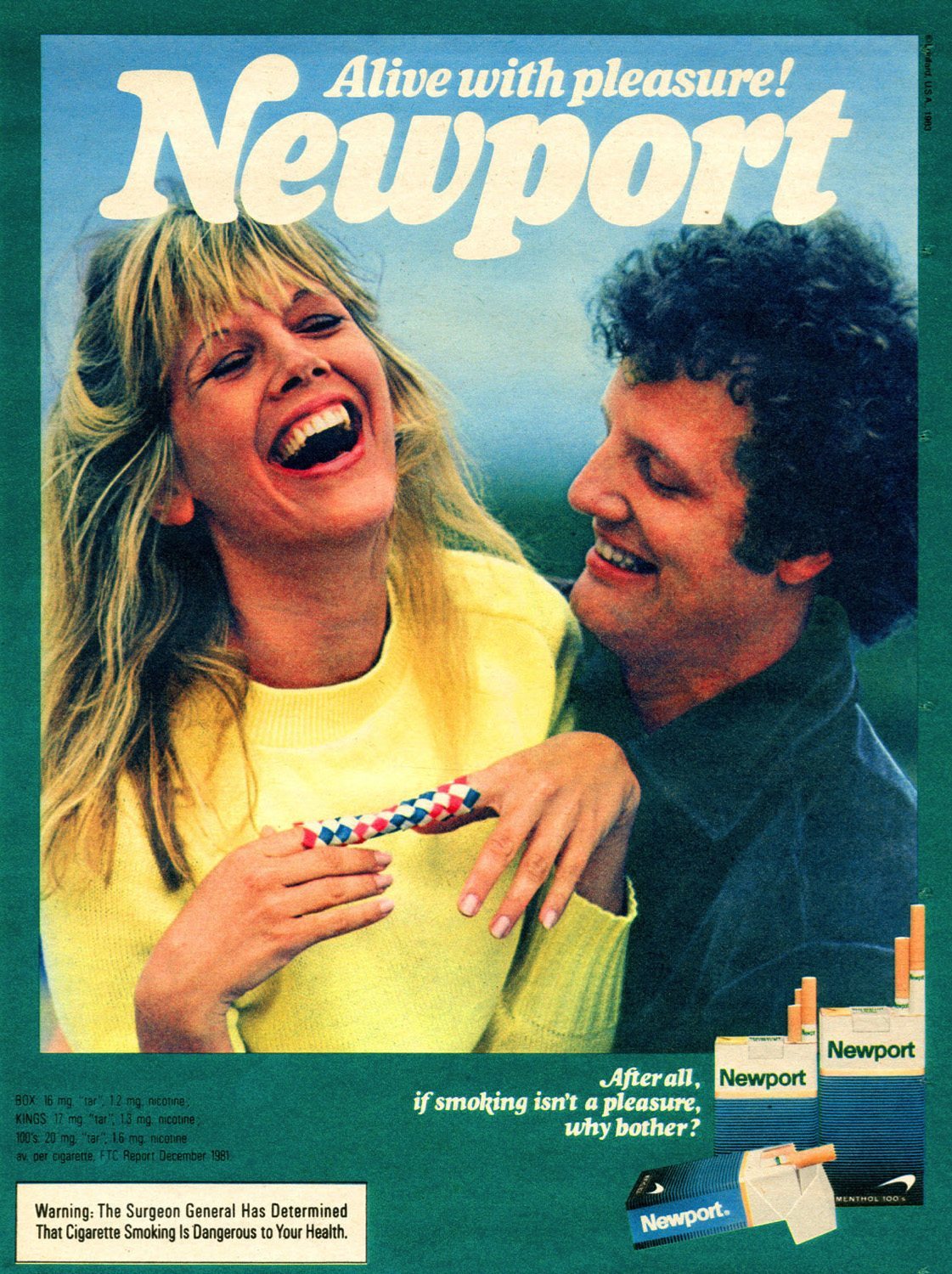 Perfect O face. In fact, I think this man is actually pleasuring this woman. No, I’m certain of it. He is definitely pleasuring her. 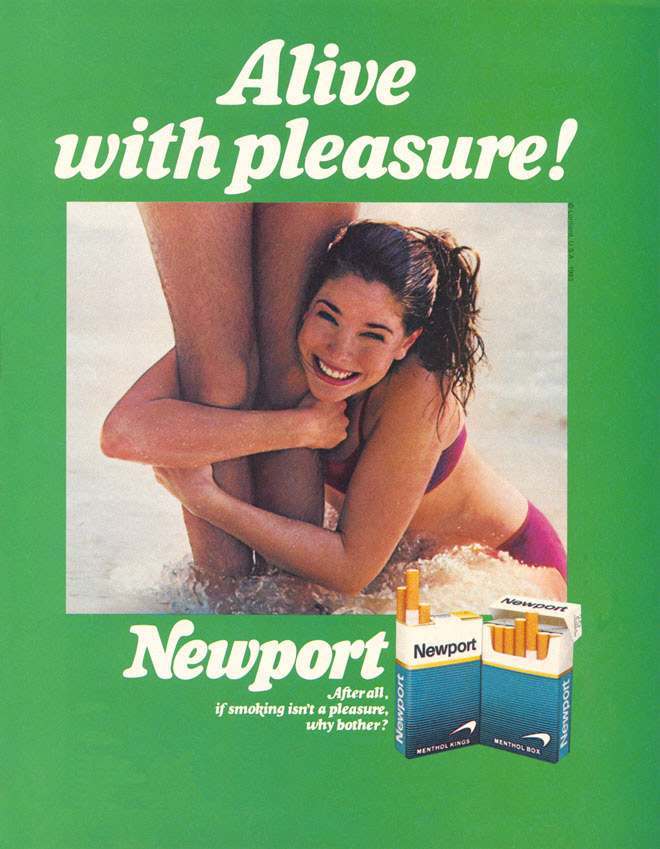 One thing you notice is that even the packs of Newport cigarettes themselves appear to be… er, “alive with pleasure,” if you get my drift.

And finally: Cover your eyes, kids…. 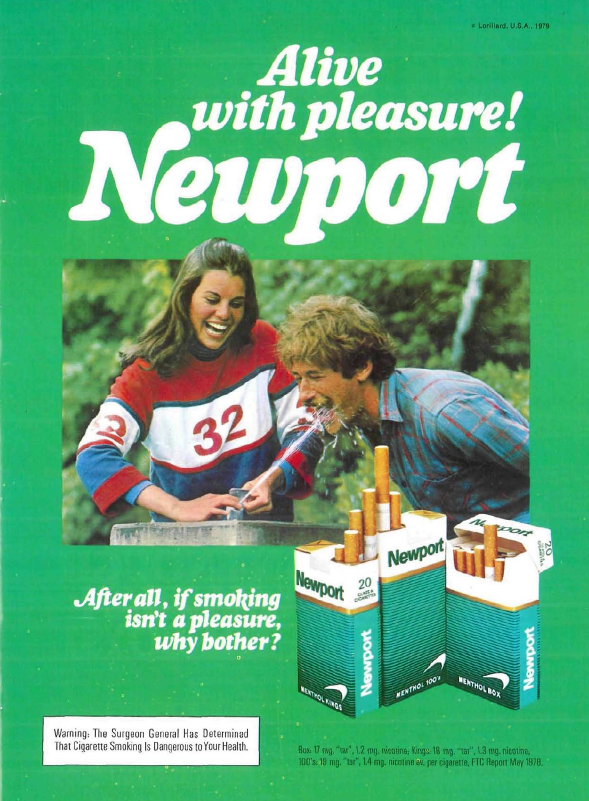