How many times has a movie, which has all the makings of a lucrative franchise, been cut down in its prime by a crap sequel?  Too often to count.  So, we won’t attempt to catalog them all – just some major league franchise wreckers.

Note that many movies on this list didn’t completely terminate the franchise – they just delivered a near lethal blow.  Thanks to them, the money machine stopped turning for a while; sometime not resurrected for decades.  Thus, we used the word “wrecked” rather than “killed”, because not all of them were fatal accidents. 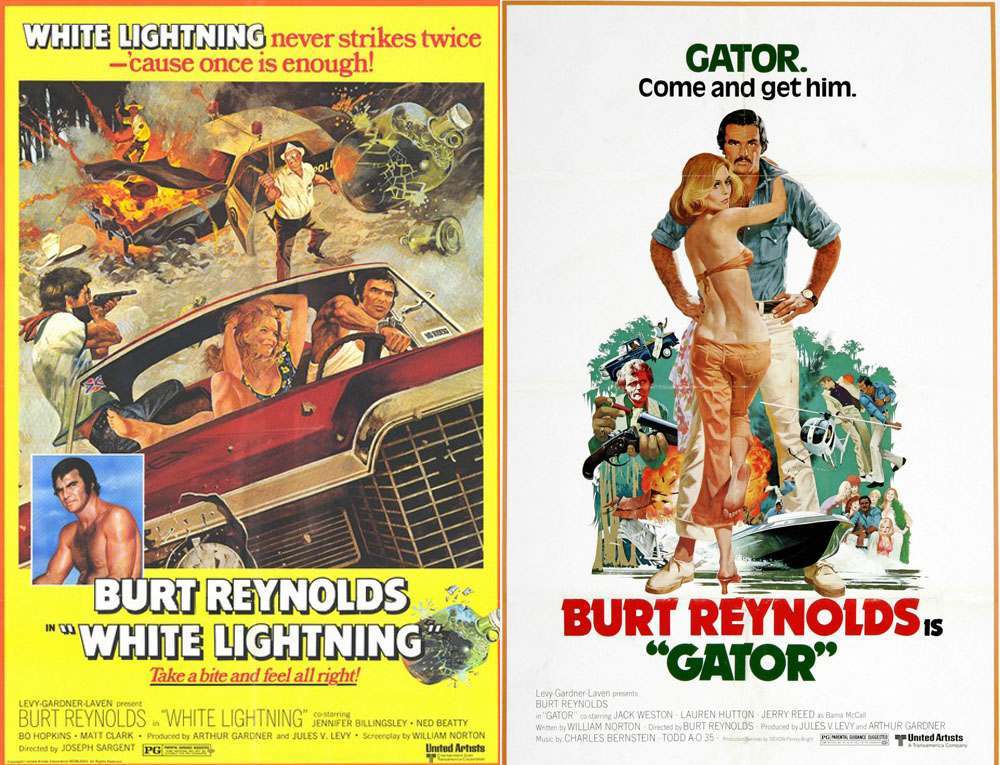 For each listing, we’ll include the movie poster for the original and the sequel that stunk it up.  The White Lightning poster above contains everything I want in a movie; then, the sequel came along and took it all away from me.

A little explanation is in order in case you haven’t seen the original Gator McClusky movie, White Lightning; easily one of the best hick flicks of all time. It’s chock full of muscle cars, pretty ladies, moonshine, and senseless sweaty violence. Gator is an ex-con badass from the swamp who answers to nobody. He’s a moon shine runnin’ son of a bitch who will tag every chick in town guaranteed.

Then came its sequel, Gator, directed by Reynolds, himself (surprise!). No longer is he a menace to society capable of brutal violence and stealing your women, Gator McClusky now is a sensitive ladies’ man. Gator went from being a shit-kicking hillbilly from the swamp to…. (gulp) John Tesh!

We get to see former badass, Gator, frolicking on the beach holding hands with Lauren Hutton, with his jeans rolled up so they don’t get wet…. makes Nathan Lane look manly by comparison.

Gator gushes to his lady, tearfully telling her,”I can’t look at you all at once. I’m afraid you’ll disappear.”  (choke!)

When he and his cohorts try to steal files from the courthouse, he spends the whole time goofing around like Don Knotts whilst cradeling a pussy cat!

I think you get the picture.  It got bad.  Real bad. 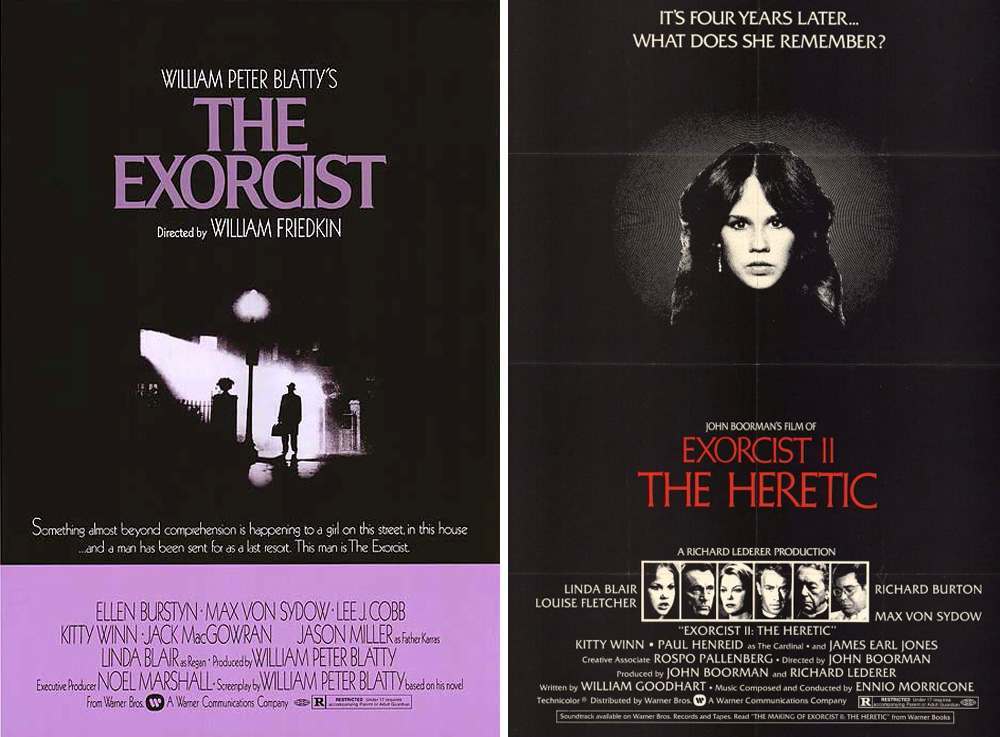 The original Exorcist was nothing short of a phenomenon.  Any list of the greatest all-time horror movies is, without exception, going to have this towards the top.  Then came the sequel four years later (I suppose the momentum had already been lost) which featured  James Earl Jones outfitted like a witch doctor,  a giant superimposed locust, Richard Burton dripping with gallons of perspiration, and not a single solitary scare.

Part III came along in 1990 which improved things a bit, but the horror tsunami that had been generated by the original had long since faded. 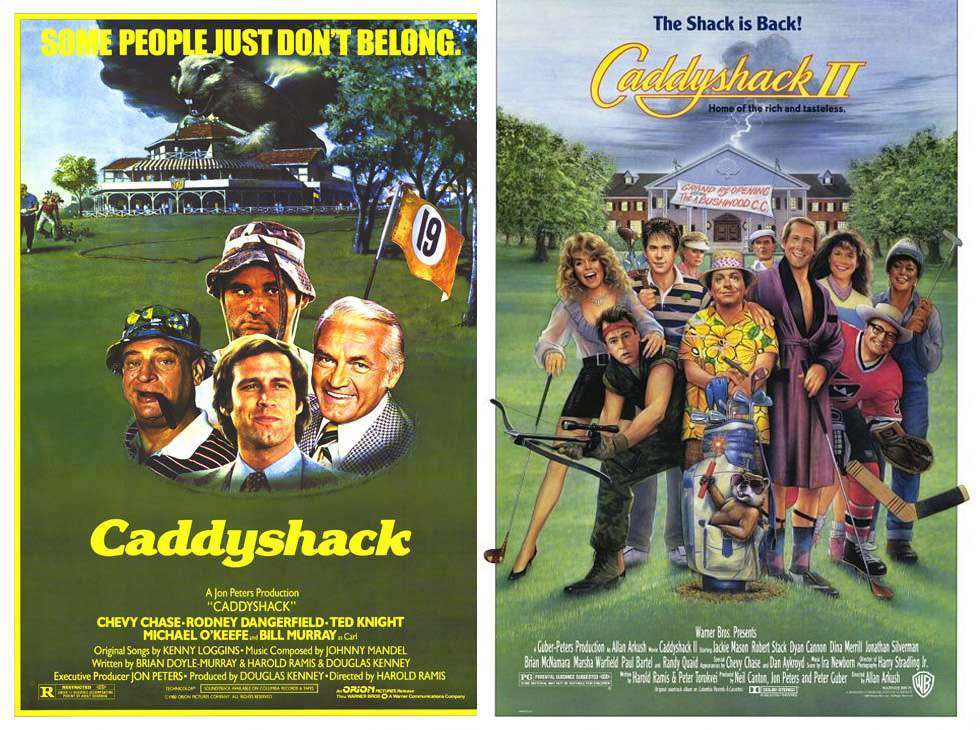 The most quoted movie of all time was given a deathly blow by a sequel which made the critical mistake of going from an R rating to a PG.  Thus, the edgy brand of comedy was dulled; it’s irreverent spirit tamed.  It didn’t help that Rodney Dangerfield was replaced by Jackie Mason and that Dan Akroyd replaced Bill Murray.  Nothing against Akroyd, but wow – it was a train wreck. 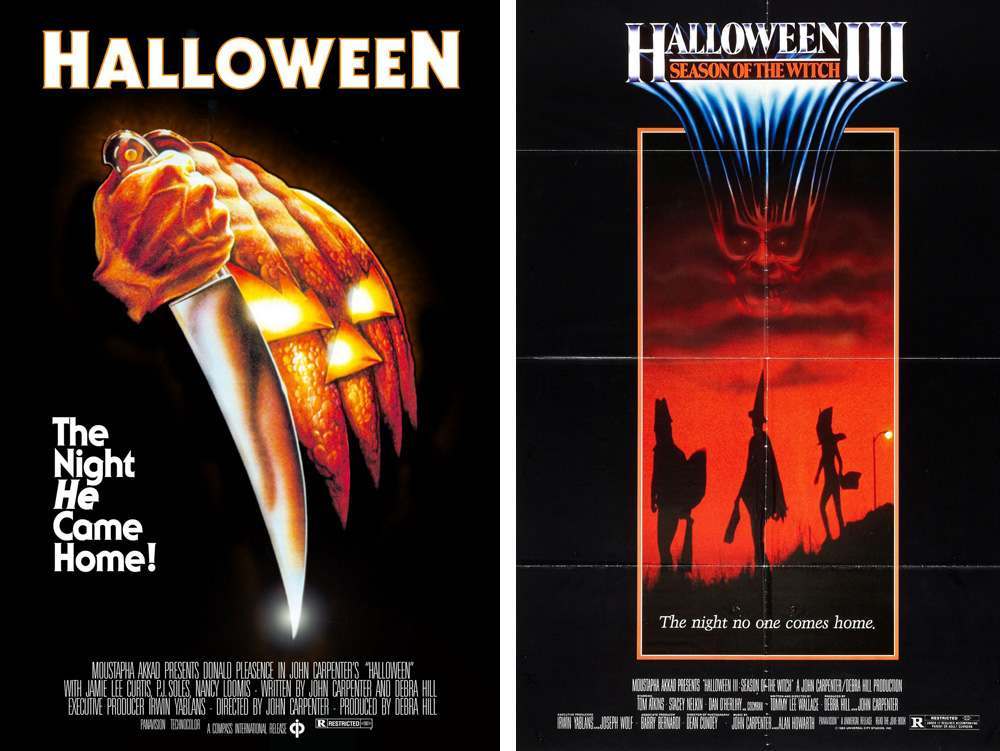 Halloween (1978) didn’t originate the slasher genre, but it definitely kickstarted it into a massive moneymaking genre that spanned the decade of the 1980s.  Unfortunately, the Halloween franchise wasn’t able to benefit as much from this cash cow as it should have due to the beyond shite third movie.  The second had been riddled with directorial differences and controversy; however, it was still a solid horror film, and worthy successor to the original.

Then came part 3 with lots of stupid exploding masks, and zero Michael Myers.  Yes, you read that right – the main slasher isn’t even in the film!  Friday the 13th never went without Jason (except the first one, of course) and Nightmare on Elm Street always featured Freddie…. but the Halloween franchise inexplicably went with a story about masks are made by a Druid who has rigged them with pieces of rock from Stonehedge strapped with computer chips that are set to go off when a special electronic signal is released…. makes sense right?   Not only is there no Michael Myers, there’s no horny teenagers, no Loomis, no Jamie Lee Curtis, and no scares.

Rob Zombie breathed new life into the franchise many years later, but the opportunity to lead the charge of slasher movies in the 1980s had been missed. 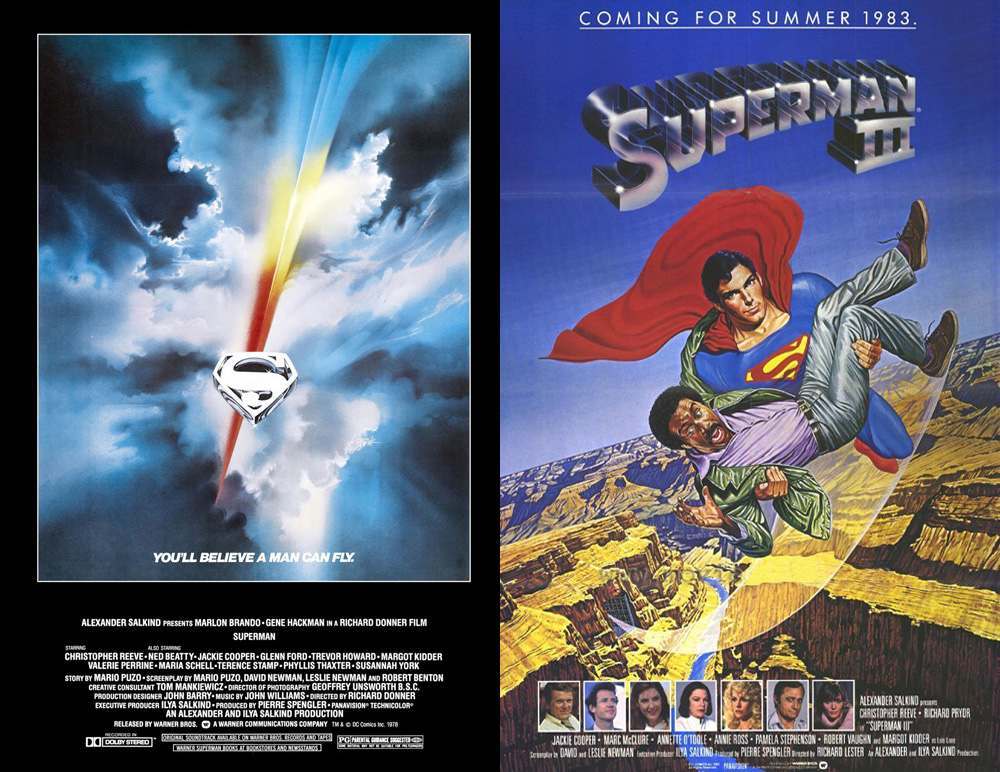 You’ve got to hand it to Richard Pryor who flails around throughout the entire film desperately trying to make this piece o’ shit funny.  Some complain that Superman II was no prize, but really neither was the very first.  It’s just that part three was so unmercifully awful that it should bear the shame of completely derailing this very profitable franchise.  A lot of the problem can be found in the fact that there is a near-complete absence of the major players associated with the earlier films: Richard Donner, Gene Hackman, John Williams, etc. – gone.  The additional fact that it contradicts 50 years of well-known mythology didn’t do it any favors. 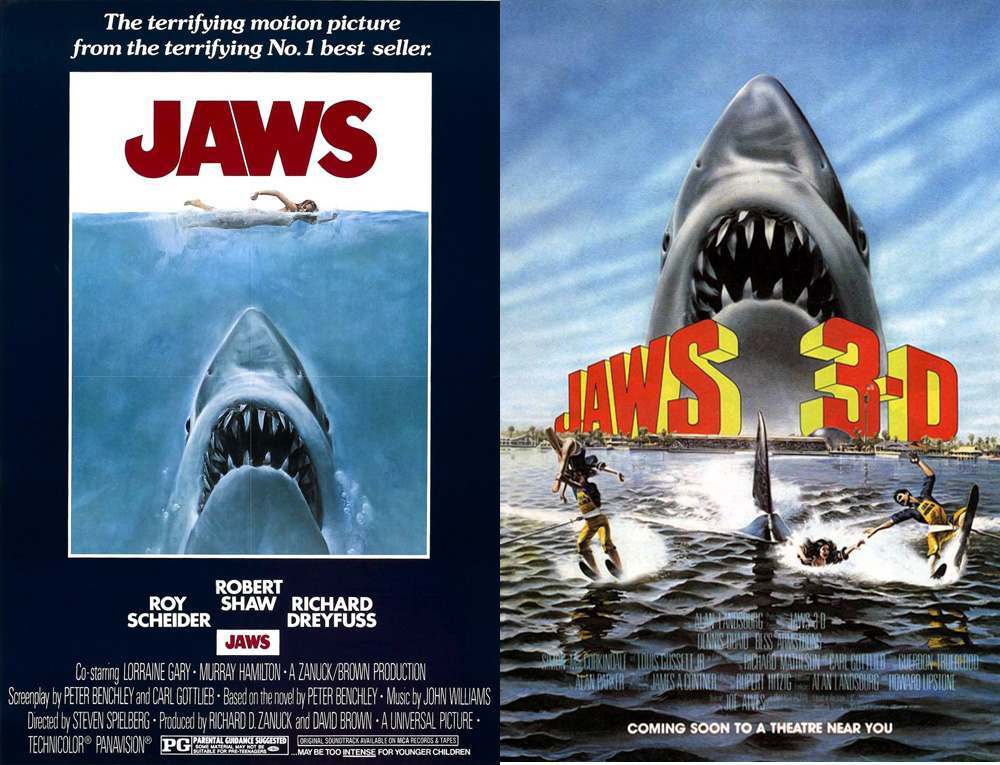 After two really good shark movies, I suppose they simply had run out of ideas, resulting in creative desperation: This time it’s the original shark’s MOTHER!

You also get quality dialogue like this: “”You tell Shelby Overmann for me he can take a flyin’ leap at a rollin’ doughnut on a gravel driveway, you hear?” (groan)

And easily one of the lames final scenes of any film: Look! The friendly dolphins didn’t die after all! Praise the Lord! They’re alive! Hooray! (loud applause, children crying) 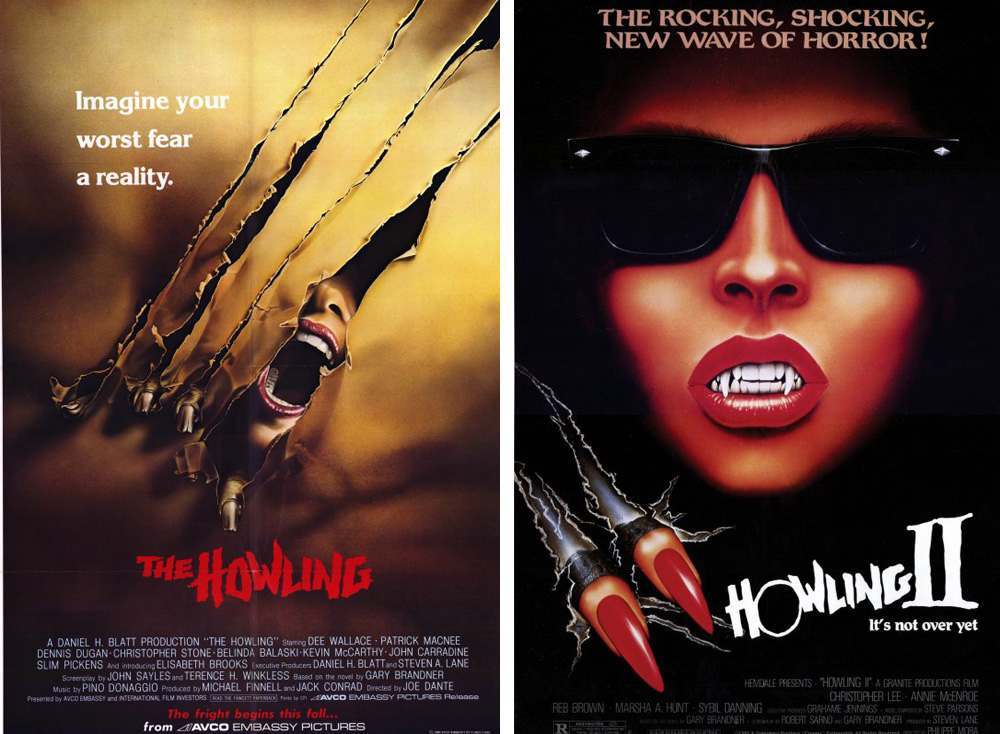 As the title implies, this sequel is pure kitsch.  What started as a fairly serious, quality horror film had been turned into a tongue-in-cheek joke…. a joke that audiences, frankly, didn’t get. 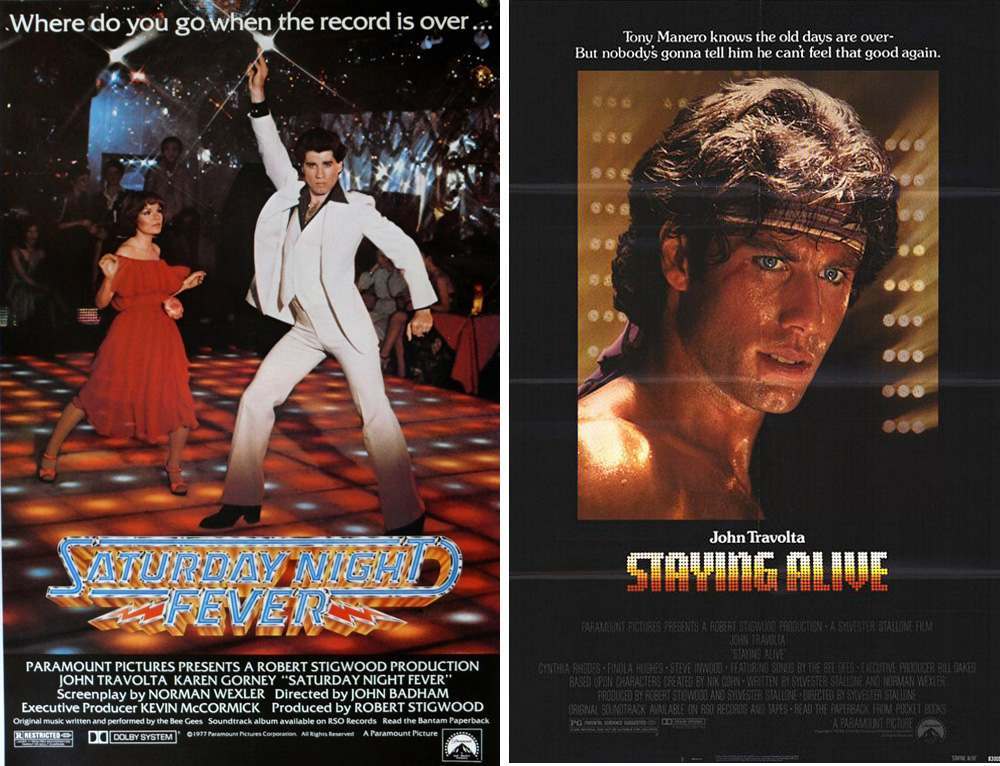 With such a longstanding disco backlash, people forget that Saturday Night Fever was actually a damn good movie.  Far from being a cheesy dance movie, it really had its share of dramatic moments and excellent acting – the epic soundtrack was just the cherry on top.

Then comes the Sylvester Stallone directed sequel, and all is lost.  True, Saturday Night Fever isn’t like Jaws or Halloween, where it particularly lent itself to becoming a franchise in the first place.  However, their attempt at making it into one was an abysmal failure.  This and other bombs from ’83 (the aforementioned Jaws and Superman sequels) have prompted many to claim that this was the worst year in the history of modern cinema. 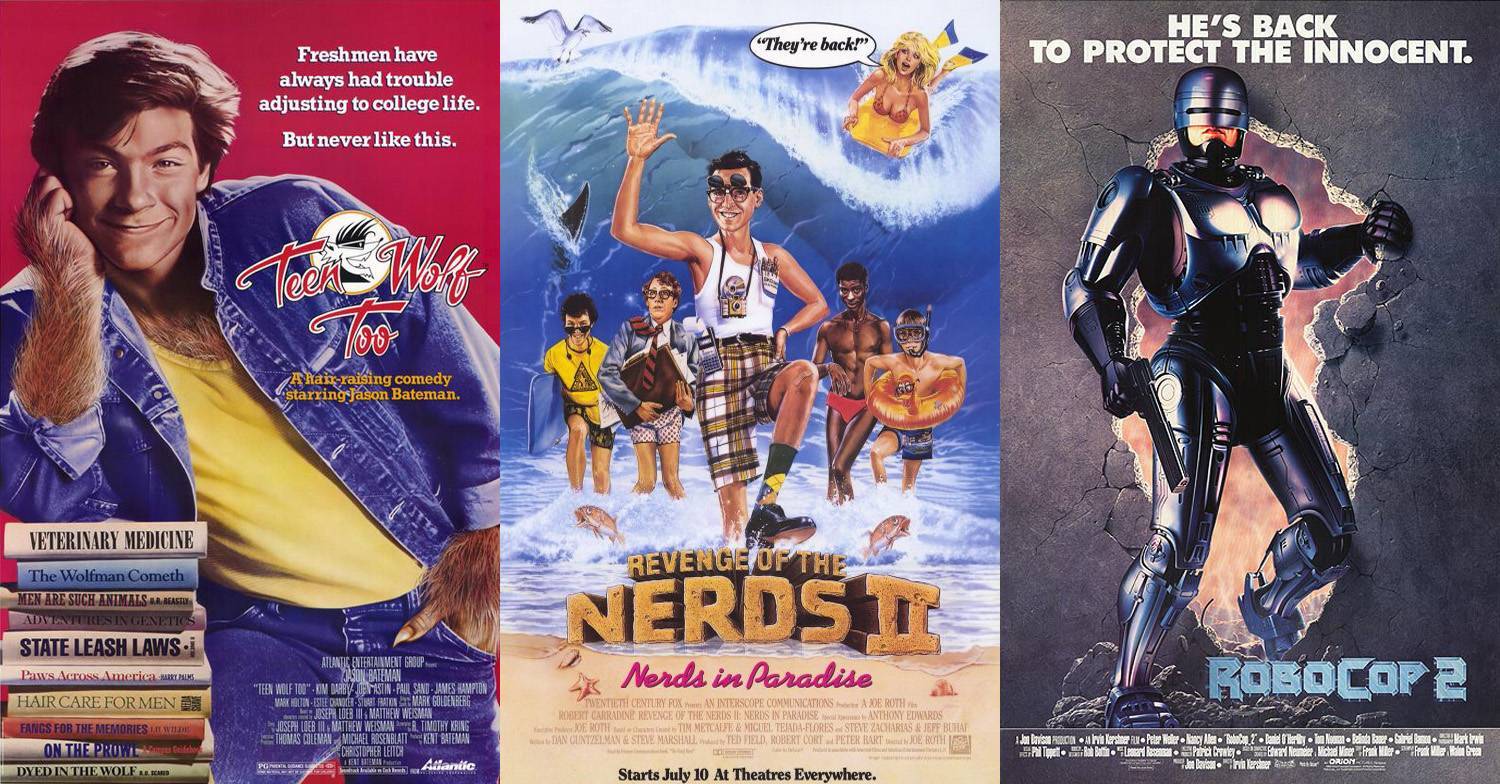 The list goes on…. Teen Wolf Too, Revenge of the Nerds II, and RoboCop 2 are all so wrongheaded in every conceivable way that it doesn’t seem right not to mention them.  But then there’s the Conan sequel with Wilt Chamberlain and Grace Jones… and all the Rocky films after 3, and Police Academy 2, and Grease 2, and…. suffice it to say, we could go on all day and not reach the bottom of this very deep barrel.