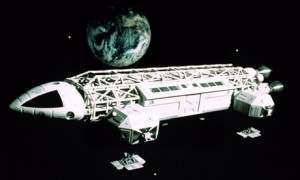 The Gerry and Sylvia Anderson TV series Space:1999 (1975 – 1977) will be forty years old in 2015.  And every year, fans of the series celebrate “Breakaway Day,” the day in series lore – September 13, 1999 — in which the moon is blasted out of Earth orbit and sent careening into a space journey of awe and mystery.

It’s easy to gaze at Space: 1999 (or 2001: A Space Odyssey, for that matter), and consider that the title represents a sort of built-in expiration date.  In other words, we are long past the year of the title, and so have the perfect opportunity to note that — surprise! — things didn’t turn out just as the imaginative writers, directors and producers conceived.

So…it’s true. The moon did not blast out of Earth’s orbit in the year 1999, and no — alas — we don’t have an international moonbase standing on the lunar surface today, either.

But in honor of Breakaway Day 2014, it seems appropriate to note that Space:1999 did predict, accurately, some aspects of the near future. 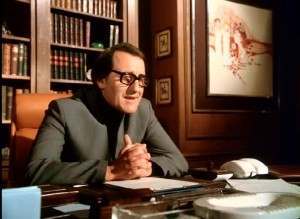 1. Space travel is still all about money.

Space: 1999 presents a de-glamorized view of what was, at one-time, the near-future. Man’s endeavors, including space flight, are reflected realistically rather than idealistically (as is the case in the far-future, “Technology Unchained” paradigm of Star Trek.) Part of this reality-based thinking is an acknowledgment of the role that economics play in every major initiative, even the space program.

As Space:1999 commences, in “Breakaway,” Commander John Koenig (Martin Landau) is informed by his boss, Commissioner Simmonds (Roy Dotrice) that he must get a vital space mission, the Meta Probe, launched before the meeting on September 15th of the International Lunar Finance Committee. I f he fails — the inference goes — future missions are on the chopping block.

A later episode, “Dragon’s Domain,” carries through on this theme.  The story, set in 1996 (hence a flashback), depicts Simmonds’ predecessor, Dixon as a bureacratic penny-pincher too.  The reality of space adventuring, he asserts, is that “it is terribly expensive.”  And every failure, like the episode’s Ultra Probe mission, represents an economic set-back.

When one considers the scrapping of the American space shuttle program, and the decades-long failure to return to the moon, one can see how the economic view of space travel is borne out in real life.  And look at  the nasty treatment of Newt Gingrich, former presidential candidate, in 2012.  He was roundly criticized and lampooned (by Mitt Romney) for having the audacity to imagine the construction of a moonbase in the near future.   Forget Technology Unchained, we are living in the era of small-minded politics. 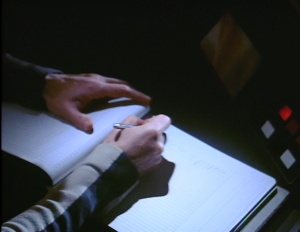 2. We have automated a lot of our work, but we’re still using paper and pens.

The 311 men and women of Moonbase Alpha interface with the base’s computer on a regular basis, and yet, they are, importantly, not paper free. Instead, they still rely on paper print-outs, type out reports on paper, and write (with pens…) in personal journals (“Testament of Arkadia.”)

Lo and behold, here we are in 2014, and though we have access to e-books, e-mail, and other electronic alternatives to paper, we — much  like the Alphans — have not yet vanquished paper or pens.  It is true that we have eliminated the electric typewriter (a prop seen in the episode “Dragon’s Domain,”) but the human desire to scribble notes in the margins of a report, or to feel the heft of a book in our hands, or even to pen — in our own hand-writing — our inner-most thoughts, remains a crucial aspect of the human experience at the dawn of the 21st century. 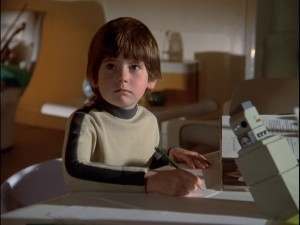 3. Our telephones communicate not just with other people, but with other devices and systems, as well.

Star Trek rightly merits kudos for its communicator, a device that many scientists insist inspired the cell phone.  But Space:1999’s commlock, in large part, seems to have anticipated the era of the Smart Phone.  It is an all-in-one device that acts as telephone, computer interface, and even a remote instrument that controls home functions like air-condition and light.  And like the iPhone, the Alphan commlock even has a “dock” for storage and recharging.

Today, smart phones can remotely change your thermostat levels, activate your home security system, or access your PC, and these are all functions, or thereabouts, of the Alphan commlock.  The commlock can remotely open and close doors as we see in “The Beta Cloud,” access computer information from any point on the base, and is programmed for various levels of clearance and access. 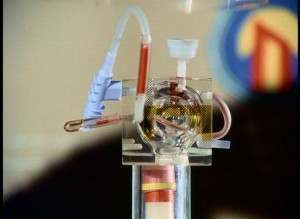 4. Advances in Heart Medicine and Technology

One of Space:1999’s most beloved characters, Professor Victor Bergman (Barry Morse) is outfitted with an artificial heart. Dr. Russell can monitor his heart’s functioning by a wrist band health monitor.  his monitor is worn by all Alphans, and crucial information is sent back to Russell’s Medical Section monitors.

Intriguingly, there already exist devices which can monitor the heart’s electrical activity, and warn physicians of heart attack symptoms or other irregularities. Additionally, there have been reports about a Bluetooth implant and app that can alert your smart phone to abnormalities in heart function too.

With the advent of the Apple iWatch, it isn’t a stretch to suggest that Moonbase Alpha’s wrist-health monitor is well on the way to becoming a reality. 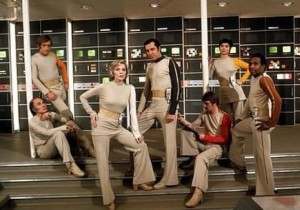 Oh, how in the 1980s and early 1990s, people liked to laugh at Space:1999 and its seventies-era bell-bottom Alphan fashions.  Yet, guess what style was back in fashion in real life in the year 1999?

If you guessed bell-bottoms pants, congratulations.

This time around, the bell bottoms were called “boot cut” trousers, and in 1997, “flare jeans” were just about the hottest thing in the fashion world.

The trend lasted through 2006, approximately, so technically, Space:1999 was correct in this  fashion prognostication.  Rudi Gernreich’s “moon city” costumes with bell bottoms would have been in fashion  in the year 1999. 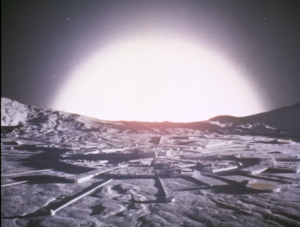 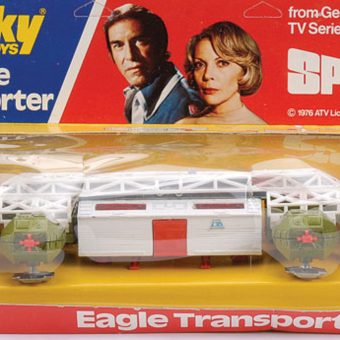 Join the Dinky Starfleet! Remembering the Dinky Space Toys of the 1970s 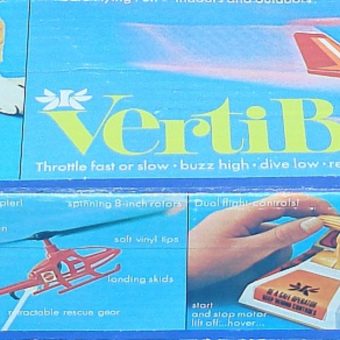 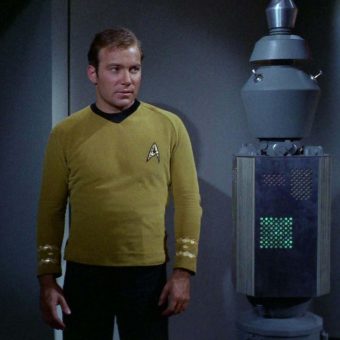