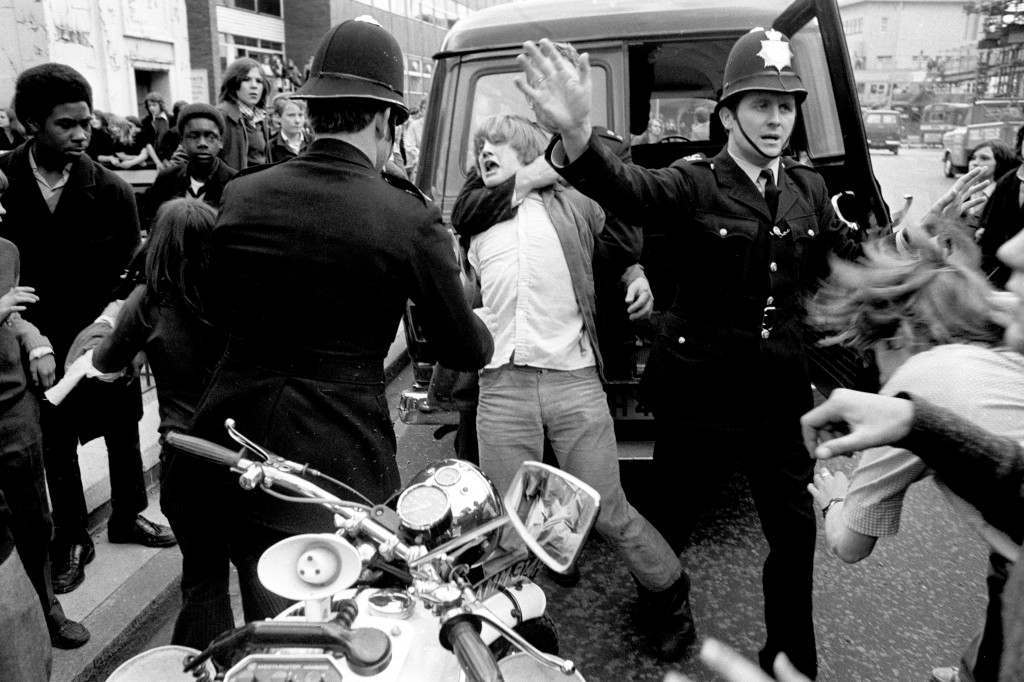 A policeman restrains a protestor outside County Hall in Lambeth, where schoolchildren were demonstrating in support of the demands put forward by the Schools Action Union, which had called a one-day strike of London pupils.

On the 4th May 1972 about 200 boys aged between 11 and 16, put down their pencils and rulers at Quinton Kynaston School on the Finchley Road near St John’s Wood, North London, in a protest over unpleasant school dinners, caning, and the conformity of school uniforms. They swarmed over the school wall and not knowing really what to do next, decided to all go home, writes Rob Baker.

The headmaster, Mr Everest-Phillips protested to the press:

“They have a choice of meals and incidents of caning have been negligible. I have only used it three times since last September. School uniform in summer consists of only a blazer.” 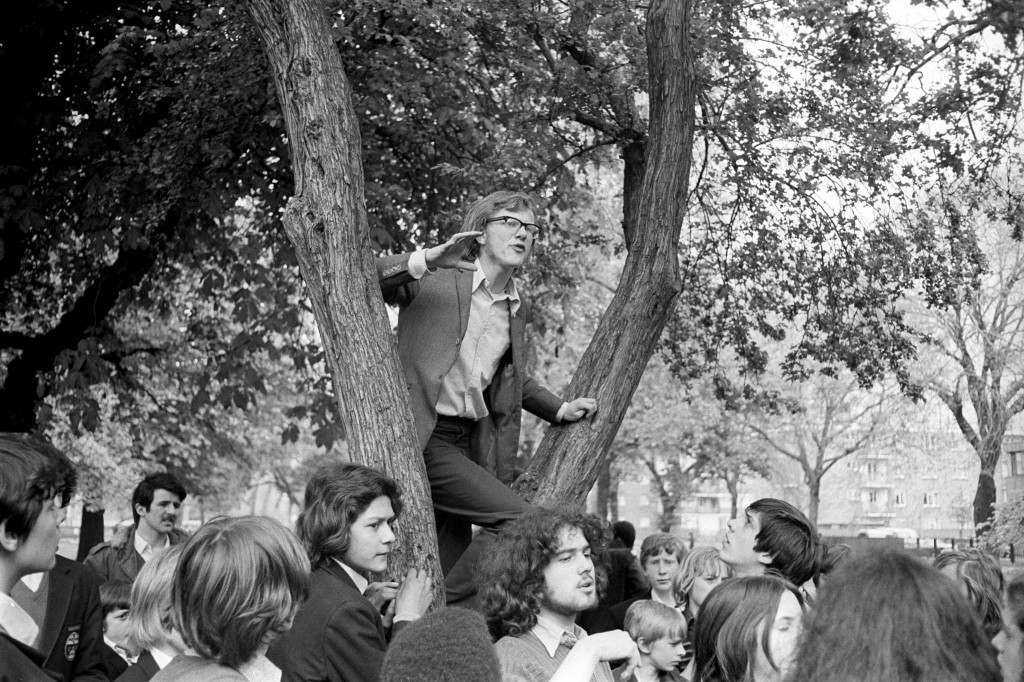 Stephen Finch, 18, leader of the West London schoolchildren’s strike, talks to fellow pupils at Paddington Green. He was later arrested outside Quintin Kynaston School while trying to persuade more pupils to join his group of militants. 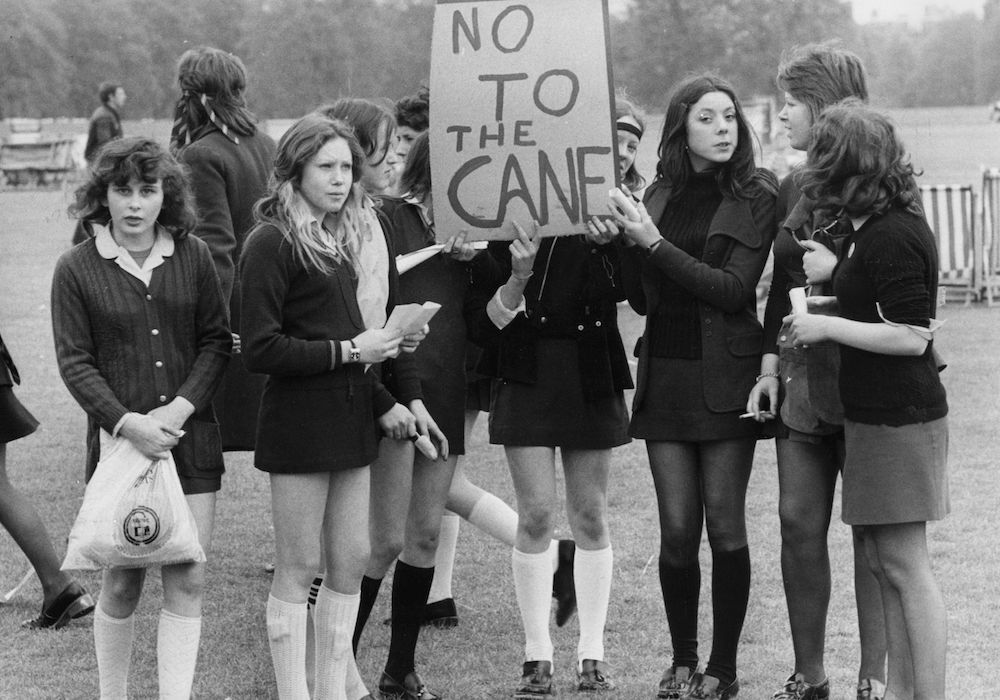 17th May 1972: School children holding a demonstration in Hyde Park against caning in schools. (Photo by Evening Standard/Getty Images) 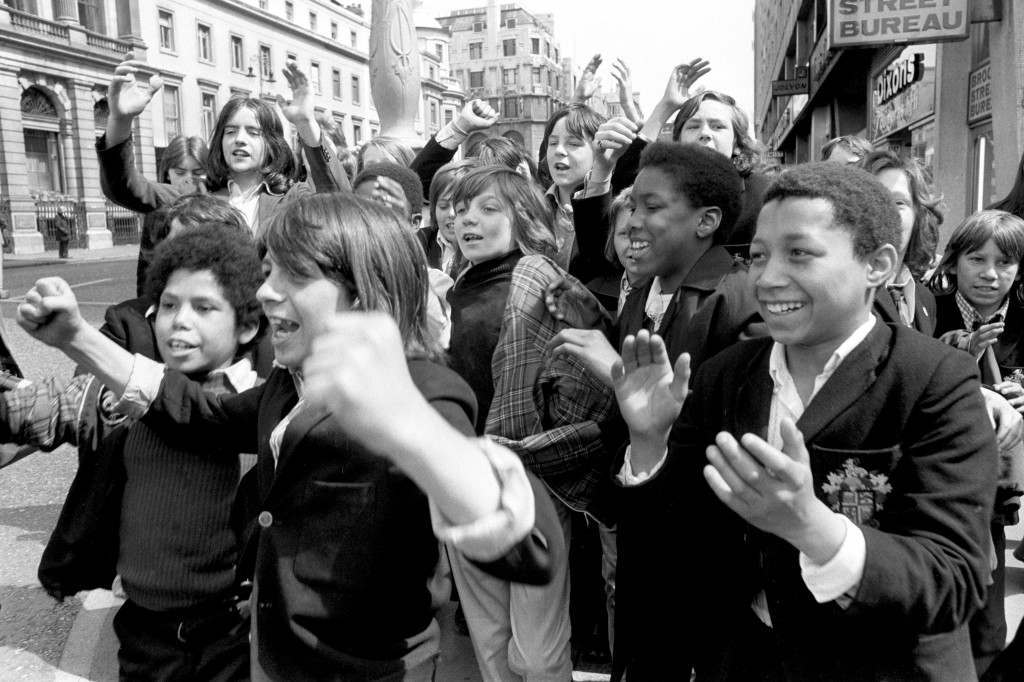 Children at Charing Cross supporting a strike called by the Schools Action Union .

A few days later 18 year old Steve ‘Ginger’ Finch, a pupil from Rutherford School in Marylebone, organised a small group of pupils from his school and nearby Sarah Siddons Girls’ School. The rally of about 60 school children met initially at Paddington Green but then started out on an eight mile march to enlist support from other schools. It was the start of a proper school strike. 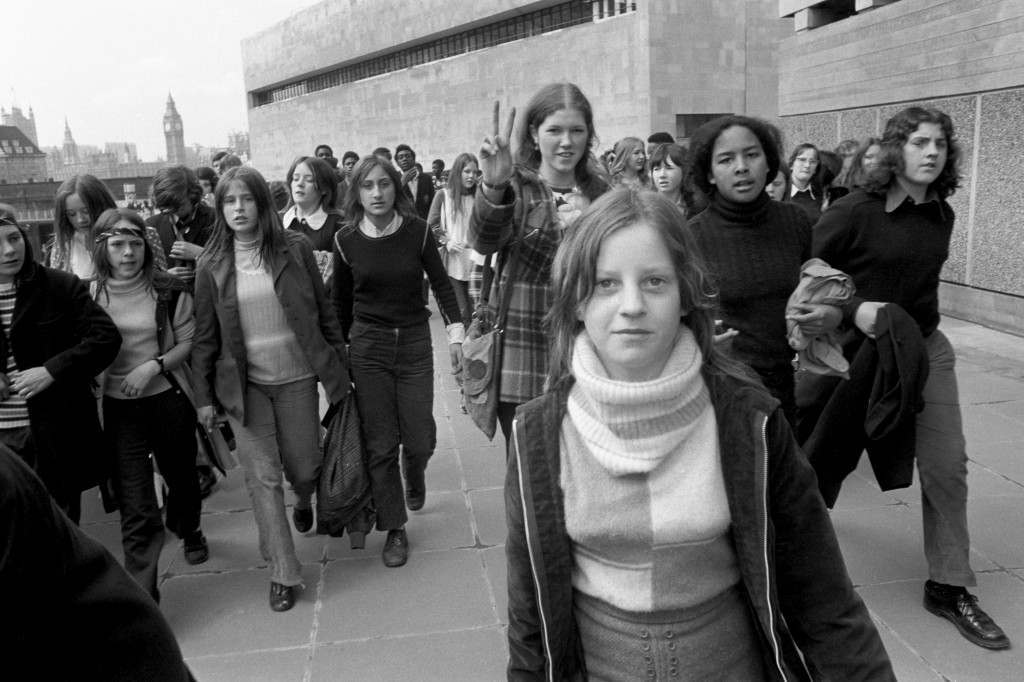 Schoolgirls, mostly from Paddington and Maida Vale, taking part in the protest march on their way to the South Bank and County Hall.

The pupil power demonstration was called by the rebel Schools’ Action Union, of which self-confessed Marxist Ginger Finch was a member, and they mainly protested against caning, detention, uniforms and ‘headmaster dictatorships’. Eventually 800 pupils had joined the demonstration and Finch was arrested, charged with using insulting behaviour and obstruction.

Prime Minister Edward Heath decided to take no risks over this uprising (it’s worth remembering that this was only four years after students in Paris had brought down the French Government) and ordered MI5 and Special Branch to monitor the schoolchildren revolutionaries. Mr Heath asked Margaret Thatcher, then the Education Secretary, to compile a report which warned:

A march of 10,000 pupils was organised by the Schools’ Action Union and the National Union of School Students for the 17th May. The Government wanted to take no chances but were struggling to find out the exact nature and route of the march. A Conservative MP called David Lane forwarded a report based on the accounts of a group of girl ‘spies’ who had infiltrated a meeting.

“The leaders spoke with Cockney accents and spoke illogically. It seemed there were a number of middle-class kids who were dressing badly to look working-class.”

The march on the 17th May became the high point of a few weeks of pupil radical power. 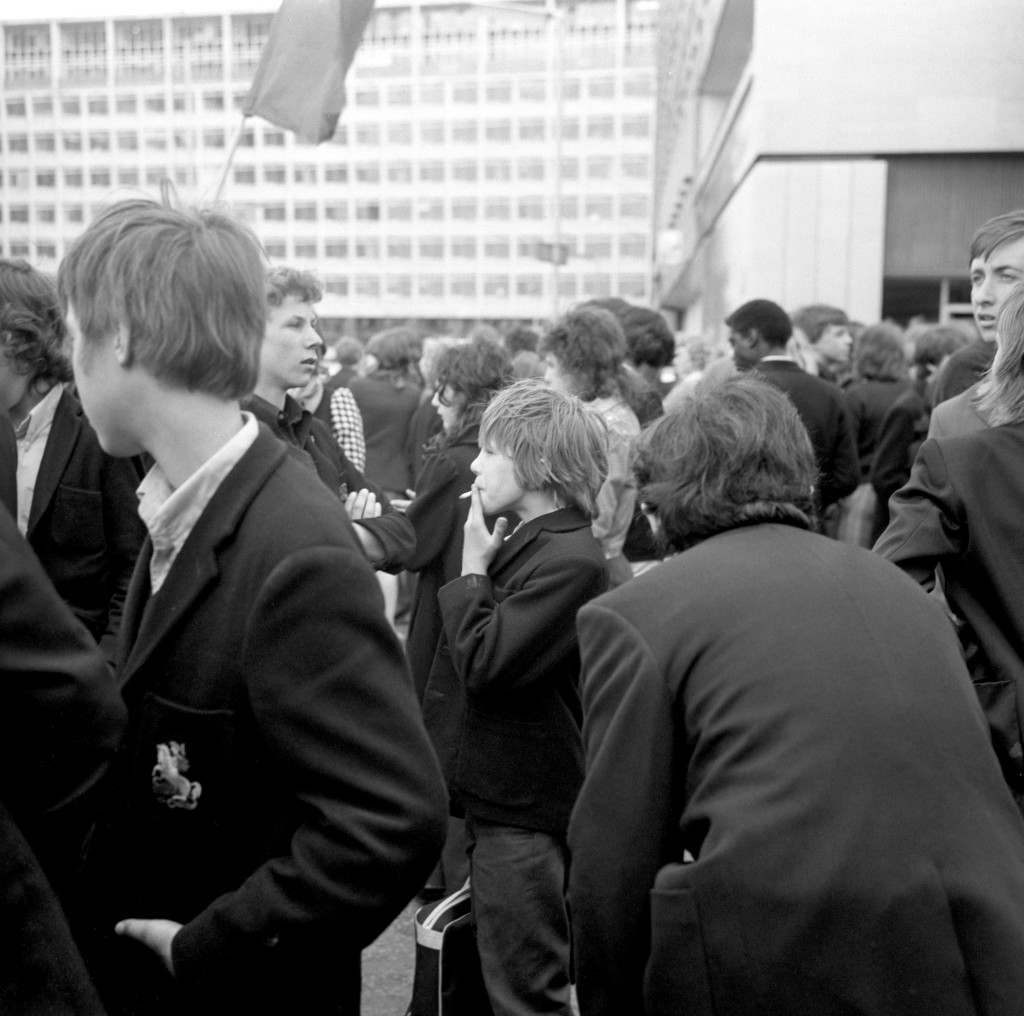 A schoolboy smokes as a ‘pupil power’ demonstration breaks up near County Hall following a rally in Hyde Park. A letter was handed in demanding an end to compulsory wearing of school uniform, caning and detention. 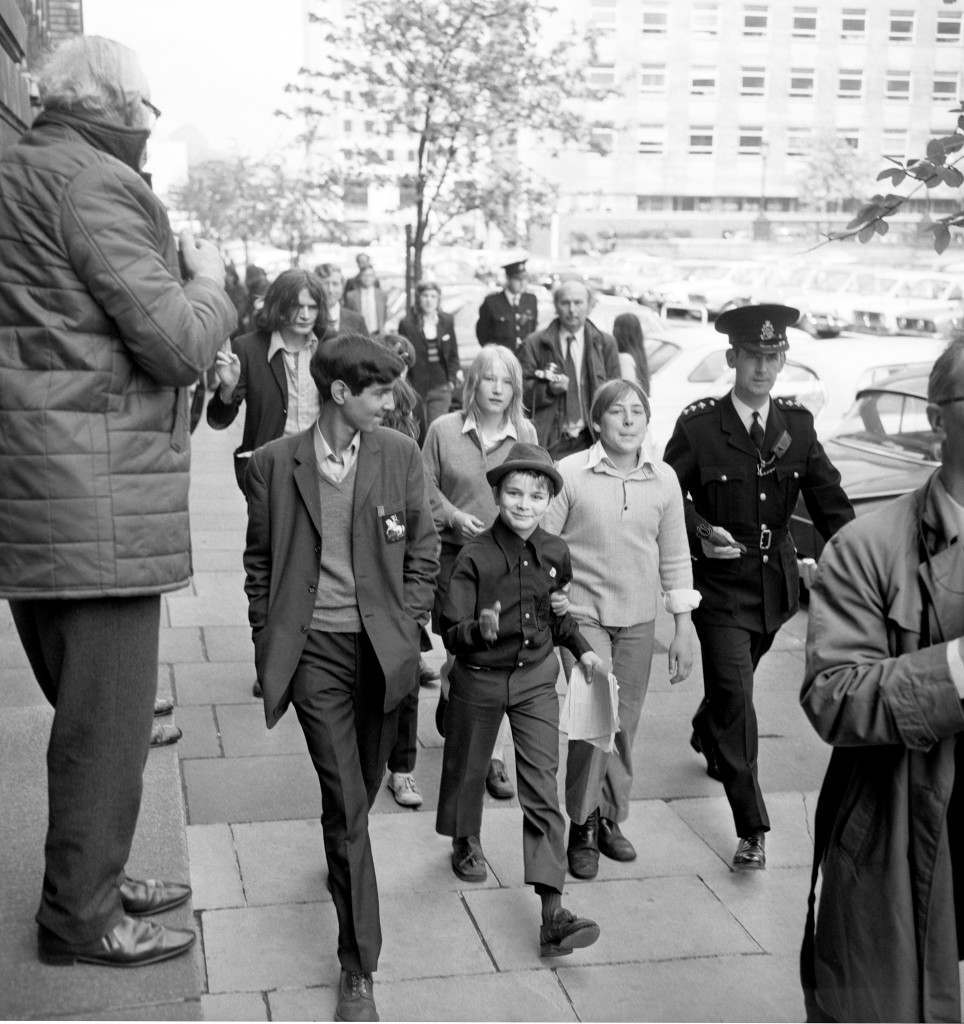 Children including a very rude boy marching towards County Hall. 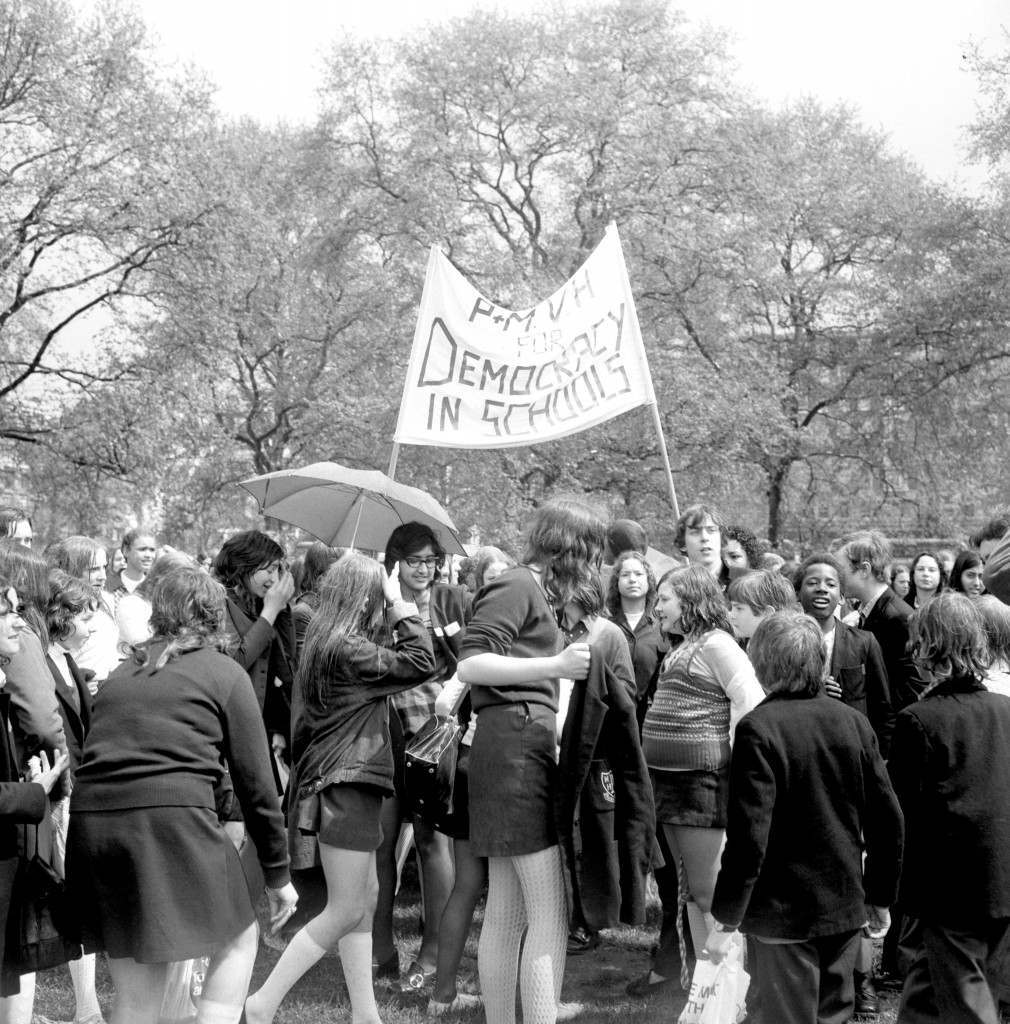 A group of schoolchildren hold a ‘pupil power’ demonstration at Speaker’s Corner in Hyde Park.

With the absence of Ginger Finch (after his arrest a few days previously) and no real leadership, the event started with confusion with half of the pupils marching to Hyde Park and half marching along the South Bank to County Hall chanting “attack the pigs,” and “we want a riot.” 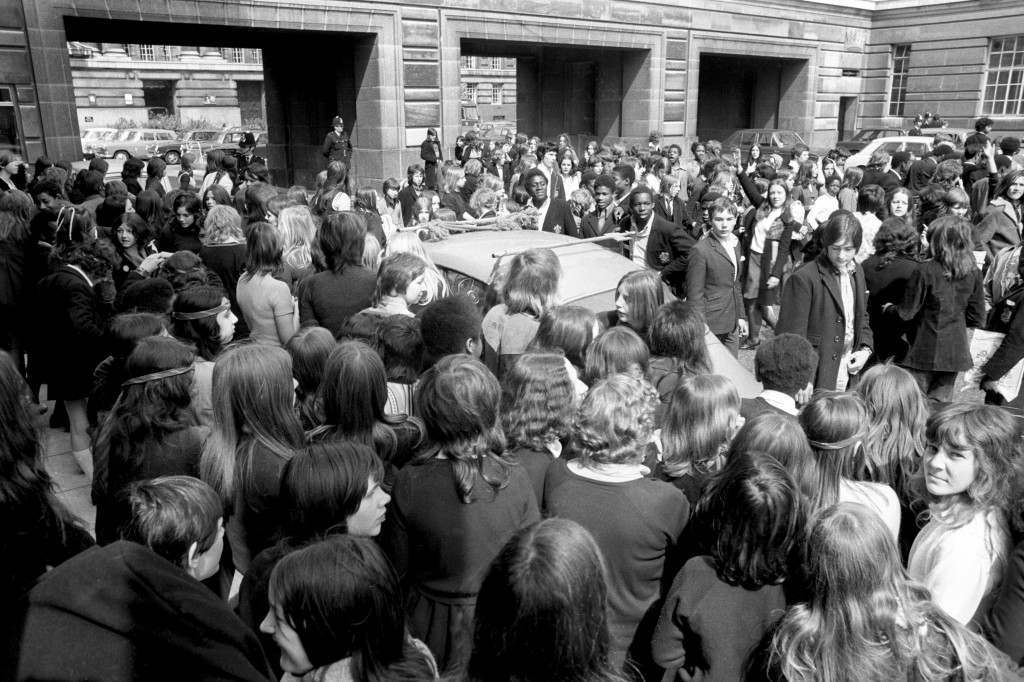 A mass rally at County Hall, organised by the Schools Action Union. 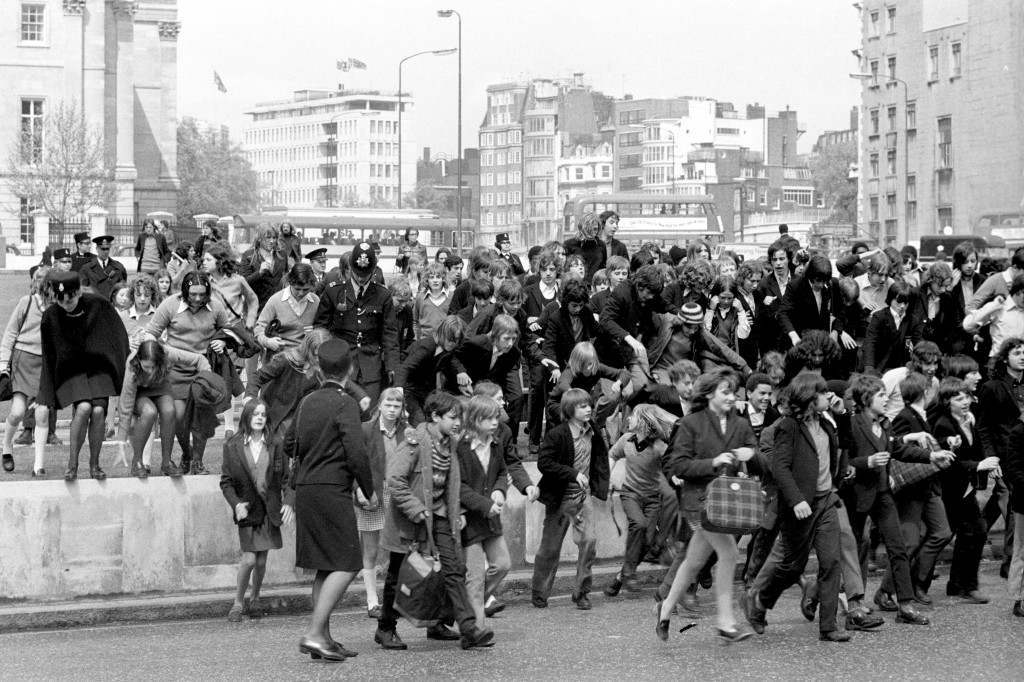 Schoolchildren clamber over the verges in Hyde Park, where a ‘pupil power’ demonstration took place at Speakers’ Corner. They then marched to County Hall.

The protesters had planned to hand a letter of protest to County hall, home of the Inner London Education Authority commonly known as the ILEA, but after arriving at their destination they realised the letter had been lost. In fact no one really knew who had the letter in the first place. The protesters subsequently marched on to Trafalgar Square where the demonstration eventually fizzled out.

Sir Philip Allen, Permanent Secretary at the Home Office said that although the march turned out totally disorganised, it shouldn’t detract from its significance “as a symptom of subversive influence”. However, and rather disappointingly really, the era of pupil-power was over almost before it had begun. The looming oil crisis and proper grown-up militancy became more important than whether school dinners were edible and school uniforms caused everyone to look the same.

Of all the original aims of the militant school-children from 1972, only the banning of corporal punishment in British schools has universally been achieved. 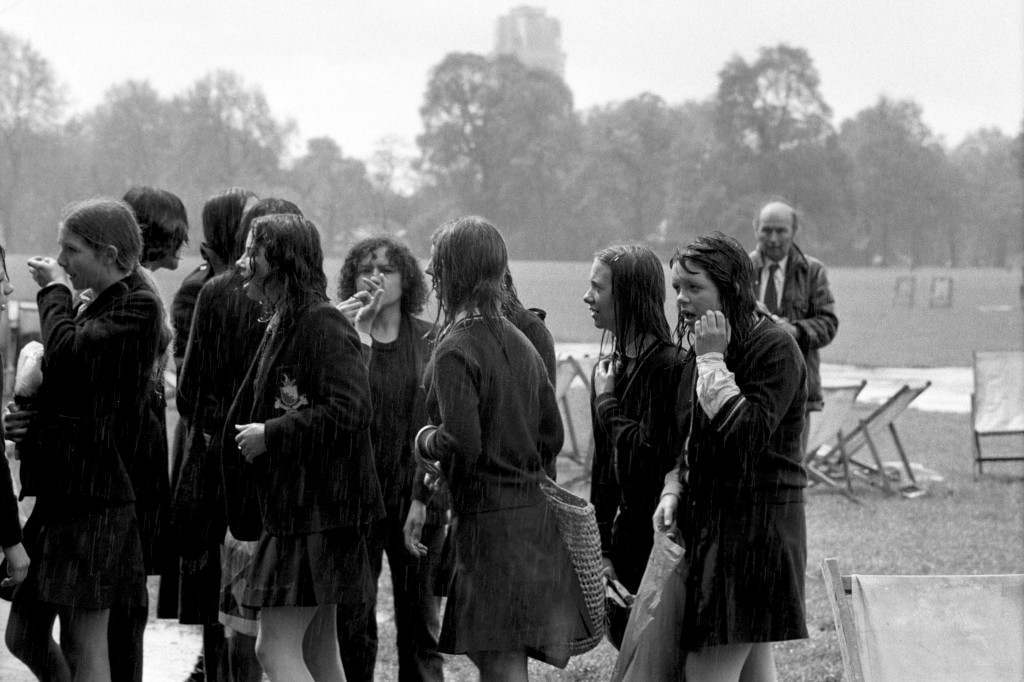 Schoolchildren head for shelter after a heavy downpour dampens their ‘pupil power’ demonstration at Speaker’s Corner in Hyde Park. 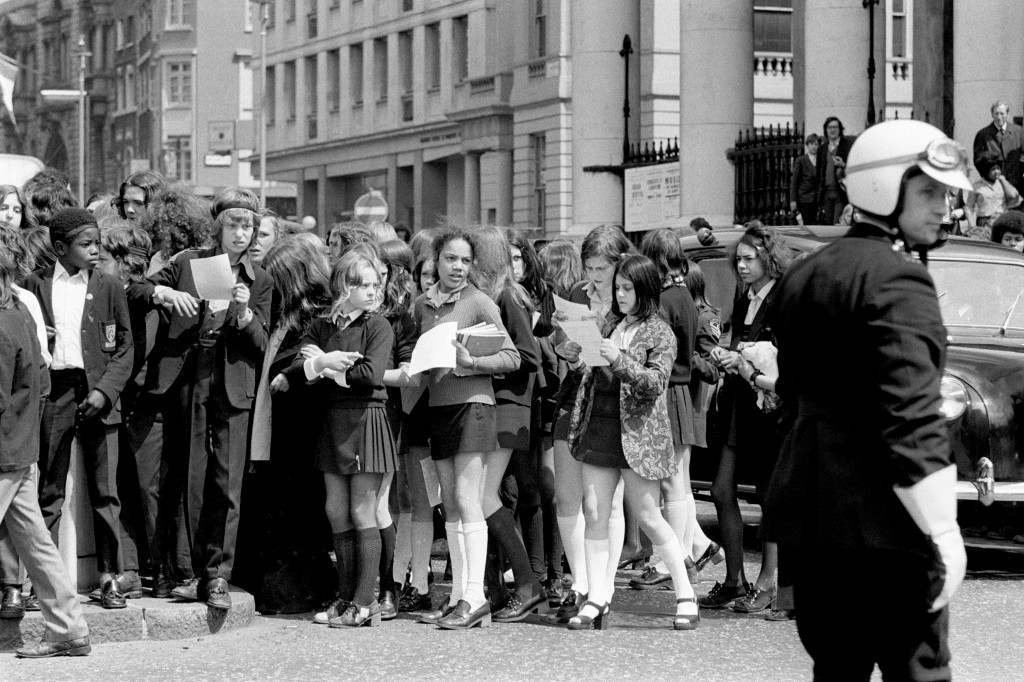 Demonstrating at Trafalgar Square before marching down Whitehall towards County Hall.