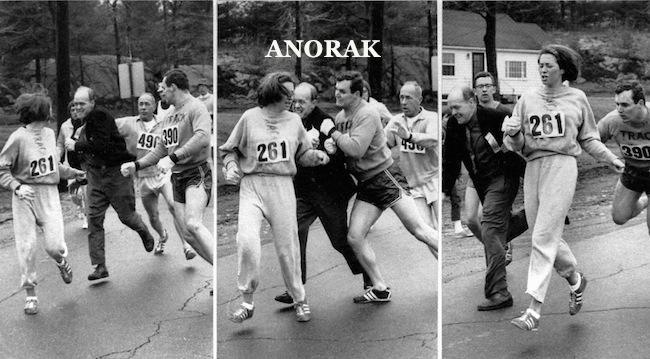 FLASHBACK to the 1967 Boston Marathon.

When Kathrine Switzer showed up to run the Boston Marathon in 1967, she wasn’t there to make a political statement about a woman’s right to compete in a men-only event. She was a 20- year-old Syracuse University junior who wanted to prove to herself and her coach she was capable of running 26.2 miles.

But Switzer had taken steps no one woman had done before to run Boston. Unlike other women who had completed the world’s oldest and most prestigious marathon, Switzer had been so brash as to officially enter the race.

Switzer never told Boston Athletic Association officials she was a woman, but the race application didn’t ask. In those days, the BAA assumed everyone entering its grueling event was a man. But on that cold day at the starting line in Hopkinton, Mass., Switzer’s coach, Arnie Briggs, picked up her race number and she pinned it on her hooded sweatshirt.

“Get the hell out of my race and give me that number!” shouted Semple, one of the race’s top competitors during the 1930s.About three miles into the race, the press truck caught up to Switzer, who was running with Briggs and her burly boyfriend, Tom Miller. When the photographers noticed a woman in the race with an official number, the cameras started to click. And something clicked inside a BAA official, Jock Semple, who jumped off the truck and ran at Switzer in an attempt to tear off her number.

Fortunately for Switzer, Semple only ripped a tiny corner of her number off. And when he tried again, Miller intervened, laying a shoulder block into Semple that sent the 64-year-old Scotsman sprawling to the pavement.

Semple got back on the press truck. As the vehicle left to rejoin the lead pack, Semple shook his fist and yelled, “You’re in deep trouble!”

Dazed and frightened she would be pulled off the course at any moment, Switzer managed to finish between four and five hours. No one was quite sure of her time. She wore no watch and by the time she finished, all the officials had left. Ironically, Bobbie Gibb, a woman who ran the race without an official number, finished about an hour ahead of her. But it was Switzer who had made headlines the next day with dramatic photos of her encounter with Semple.
“The embarrassing thing for me now is that I sold women so short at the time,” said Switzer, 55, who will be doing commentary for today’s NBC broadcast of the New York City Marathon. “I thought other women weren’t interested in sports and I thought they didn’t get it. It wasn’t until after Jock tried to tackle me that I realized the reason other women weren’t there is that they hadn’t had the same opportunities that I’d had or the encouragement from their family, dad or coach.”Switzer entered the race proud to be a woman but with no agenda to promote women’s running. Her experience “radicalized” her, changing her outlook on women in sports.