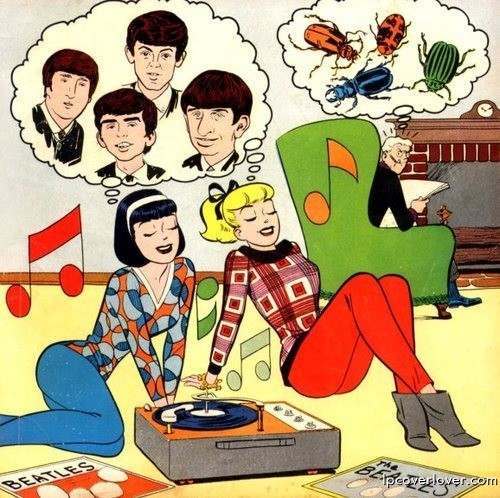 THE FAB FOUR had barely left Ed Sullivan’s stage before their songs were being covered like mad across the entire planet. You’d be hard pressed to find a single artist from the mid-sixties to mid-seventies who didn’t have at least one cover in their repertoire. Then royalty rates went up, and it naturally became harder to include a Lennon/McCartney track on an album…. and finally, in July 1978, The Bee Gees famously ruined the idea altogether.

Herein are fifteen from the Golden Age of Beatles Covers – when everyone from Deep Purple to Peter Sellers had a Beatles song to make their own. Enjoy.

1.  “Come Together” by Brothers Johnson

I actually prefer this to the Aerosmith cover.  The Brothers give “Come Together” a healthy injection of booger-nose funk.

2.  “Something” by Frank Sinatra

Frank called this the greatest love song ever written, and he gives it the full Sinatra treatment: trademark swagger, cocky inflection, and best of all:  “You hang around, Jack, it may show…”

George Harrison was apparently so amused by the rendition; he inserted “Jack” into his own performances on occasion.

3.  “I Should Have Known Better” by Zhang Xiao Yun & Lin De Chuan

A perfectly conservative version with nary an embellishment to be found (aside from the fact that it’s in Chinese).  There’s something charming about this one, although I’m sure Yoko would disapprove.

Bluegrass just seems to work well with this song (and even better with their cover of “And Your Bird Can Sing”).  I could do without the dumb sound effects, but I suppose it comes with the territory on novelty tracks.

With a song this dense and rich, how do you translate it into stripped down, bluesy garage rock?  The answer is you don’t.  But if you do, you can’t do much better than Spooky Tooth.

Covers that bring nothing new to the table are a waste of time. Paint-by-numbers imitations like “Lucy in the Sky with Diamonds” by Elton John, “Mother Nature’s Son” by Sheryl Crow, and “I’m Only Sleeping” by The Vines are pointless.  Here, Purple delivers up a heavy handed “Help” very unlike the bouncy original.

Speaking of bringing a fresh spin…

This cover was granted a much deserved push to the masses via the Children of Men soundtrack.  Junior Parker takes a psychedelic masterpiece and twists it into haunting soul.

For another quiet soulful approach check out Grady Tate’s “And I Love Her”.

Overall, I can’t complain – the fun Les Intrigantes are having with the song is contagious.  Of particular interest is about midway through when the singer attempts to replicate George Martin studio trickery by cupping her hand over her mouth.  A disturbing “Wah Wah” sound emerges.

Palmer takes his job seriously and gives the song some teeth – and I don’t even mind the corny synthesizers.

11.  “We Can Work It Out” by Kasenetz Katz Singing Orchestral Circus

Bubblegum pop producers Kasenetz and Katz had a lineup of radio-friendly acts which they brought together as a gimmick meant to capitalize on Sgt. Pepper.  It didn’t work.

It’s almost a Bond theme and almost listenable.  Adored by many, but this one leaves me confused and unhappy.

The man behind Mike Oldfield delivers an interesting cover sans instruments.  Of course the original is far better, but it’s still enjoyable to hear a fresh take.

What matters with a “Hey Jude” cover is what you do with the coda.  It’s all about the “Na Na”, and Picket does not disappoint.  Much better than the Bing Crosby version.

15.  “Ticket to Ride” by Cyril Stapleton & His Orchestra

Ian McCulloch once said he’d been trying his entire music career to recreate “Ticket to Ride” – I assume he wasn’t referring to the Cyril Stapleton version.  To put it in perspective – it’s worse than Bananarama’s version of “Help”, and nearly as bad as the Maroon 5 cover of “If I Fell”.