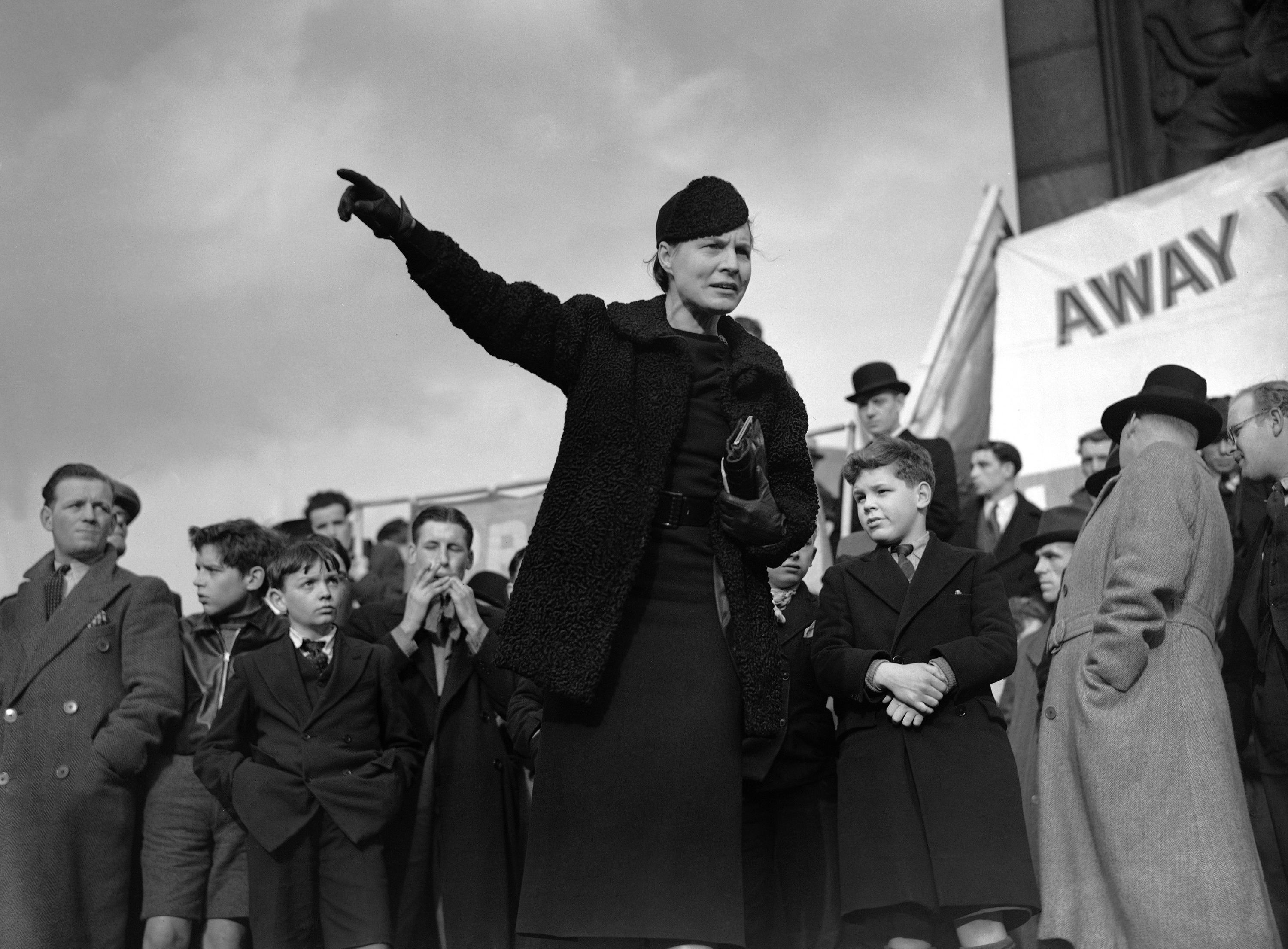 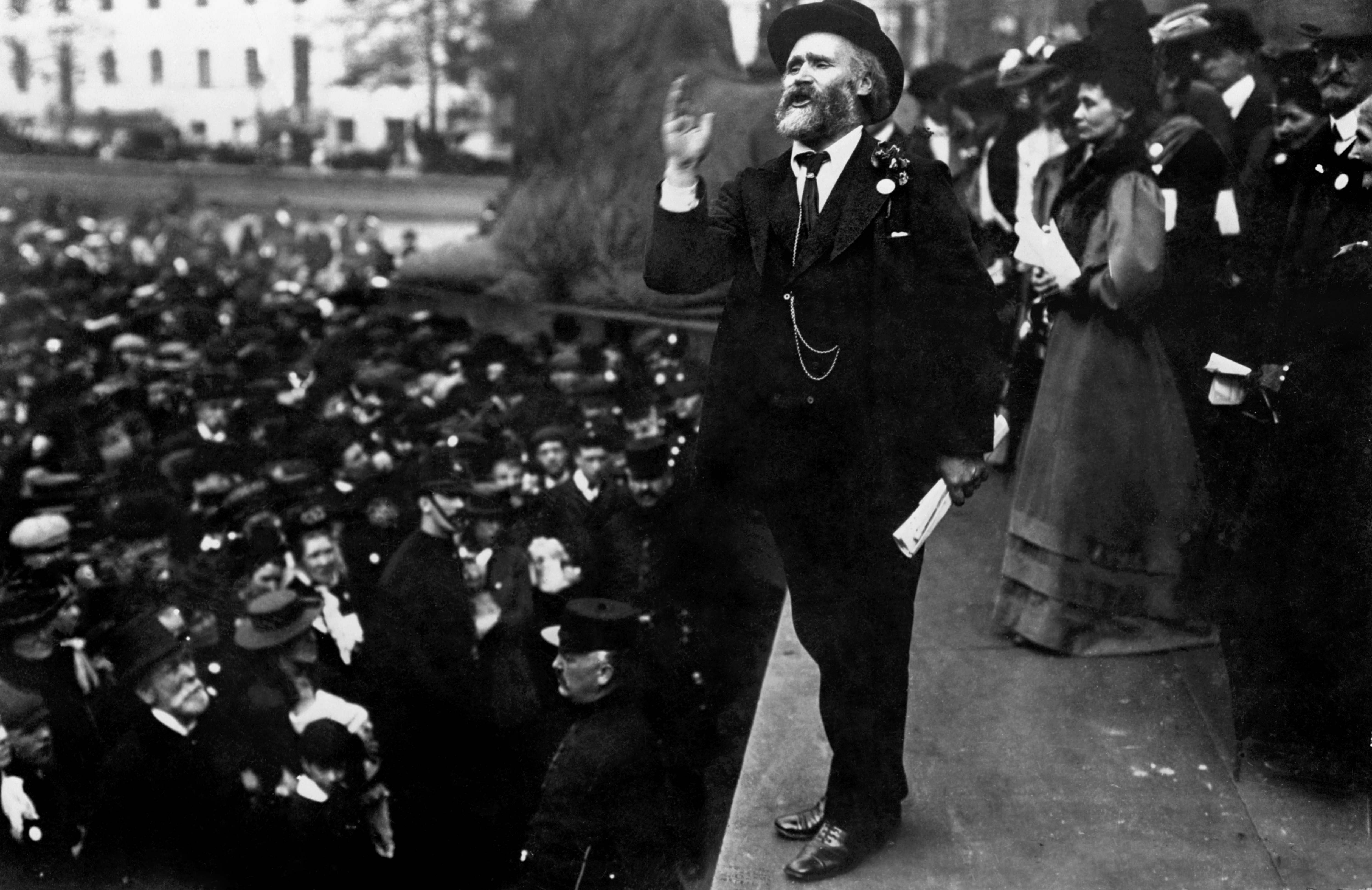 1908: Labour politician Keir Hardie speaking in Trafalgar Square at a Women’s Suffrage demonstration. Just behind is the founder of the Women’s Social and Political Union, Emmeline Pankhurst.

From almost the time when it was first opened to the public in 1840, and despite the best attempts of the authorities to ban them, Trafalgar Square has always been a centre for protests and demonstrations. In fact the fountains were a late and futile addition to the original plans so as to reduce the possibility of crowds collecting in the square. By March 1843, at which time Nelson’s Column was completed Chartist meetings at Trafalgar Square were forbidden and a general ban on political rallies remained in effect until the 1880s when the emerging Labour movement began to regularly hold protests there. 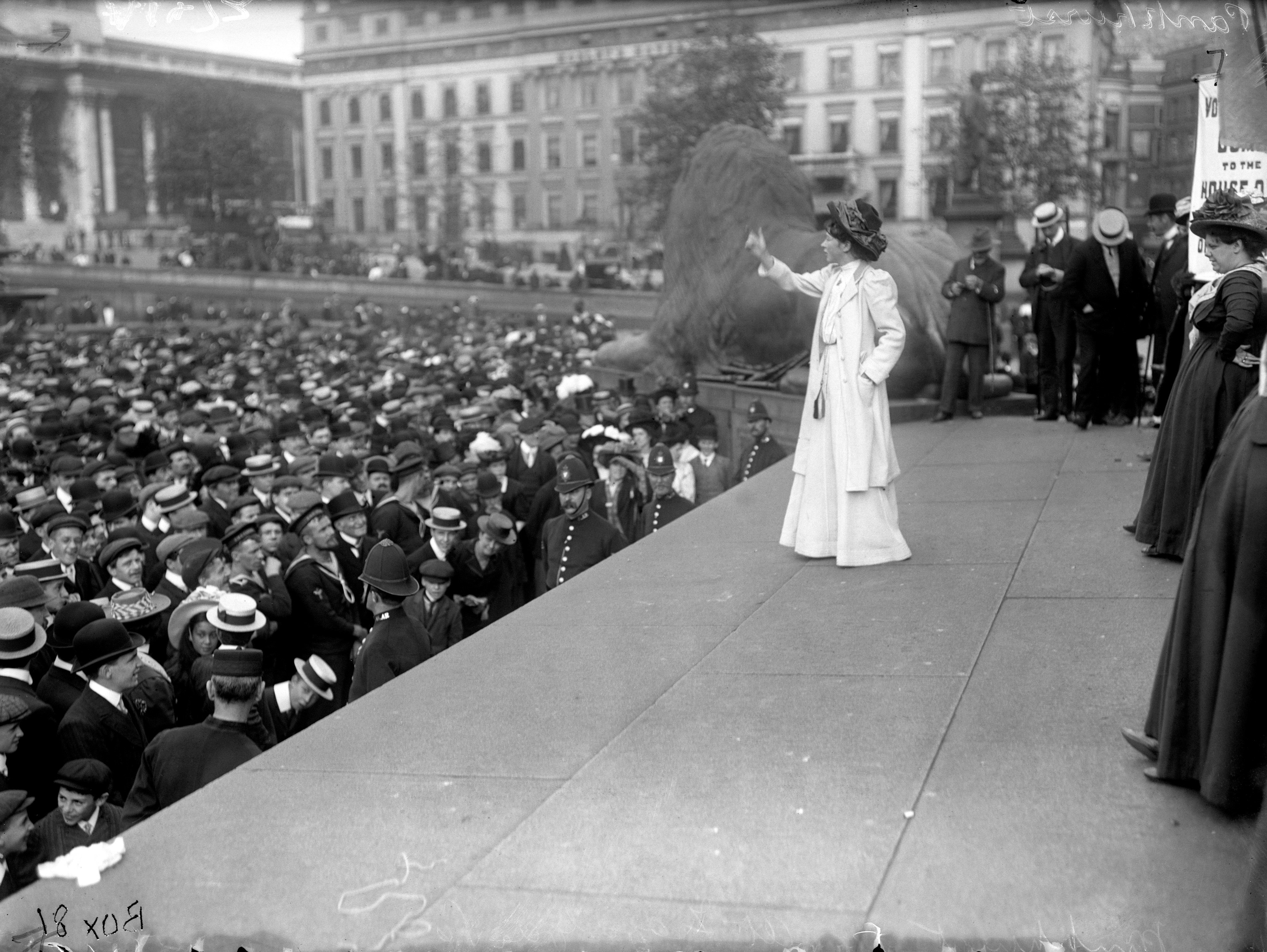 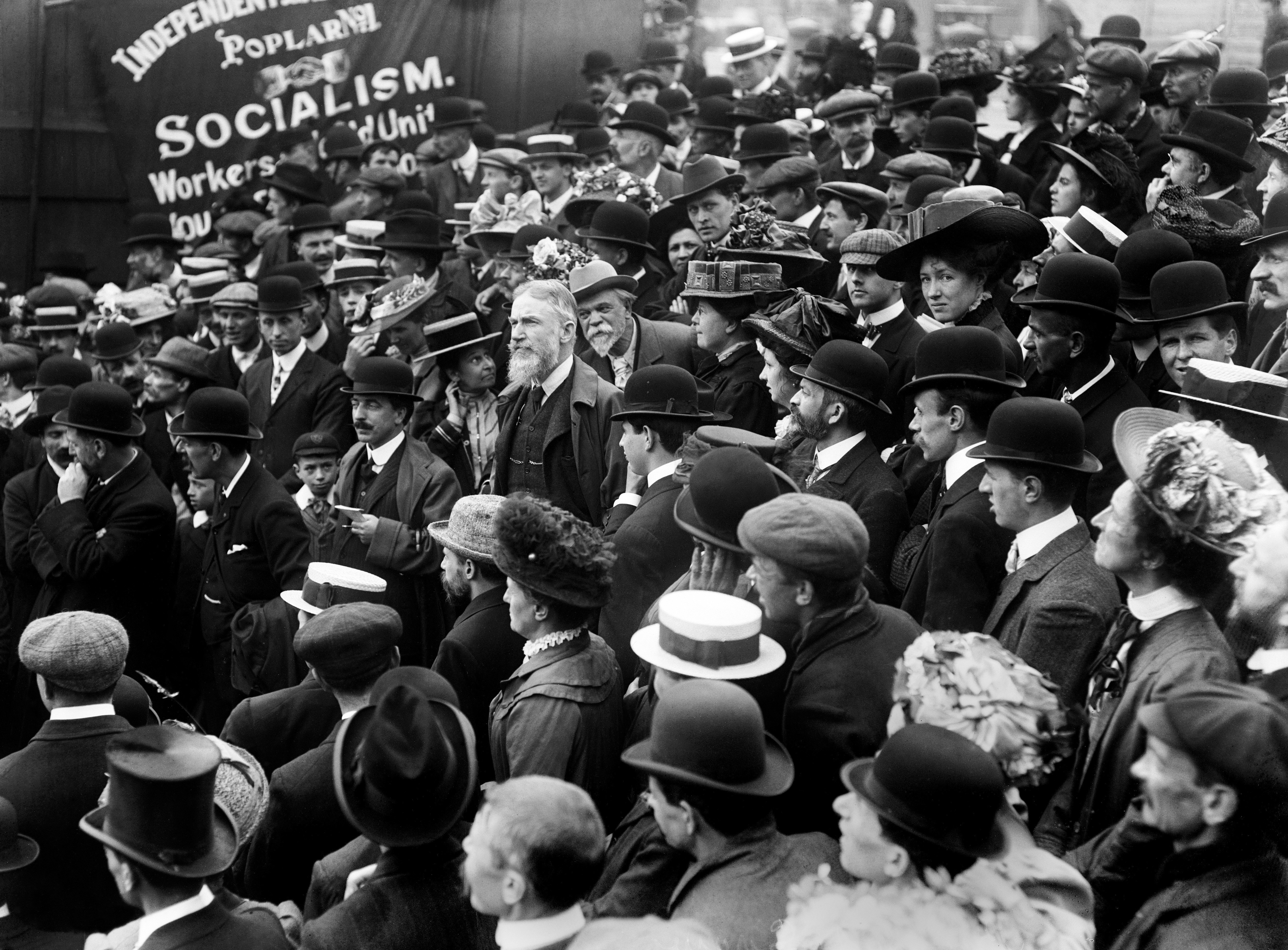 A face in the crowd, George Bernard Shaw (centre/beard), Irish dramatist and critic at an anti-vivisection protest at the Square. He was an active socialist and became a member of the Fabian Society, c.1910. 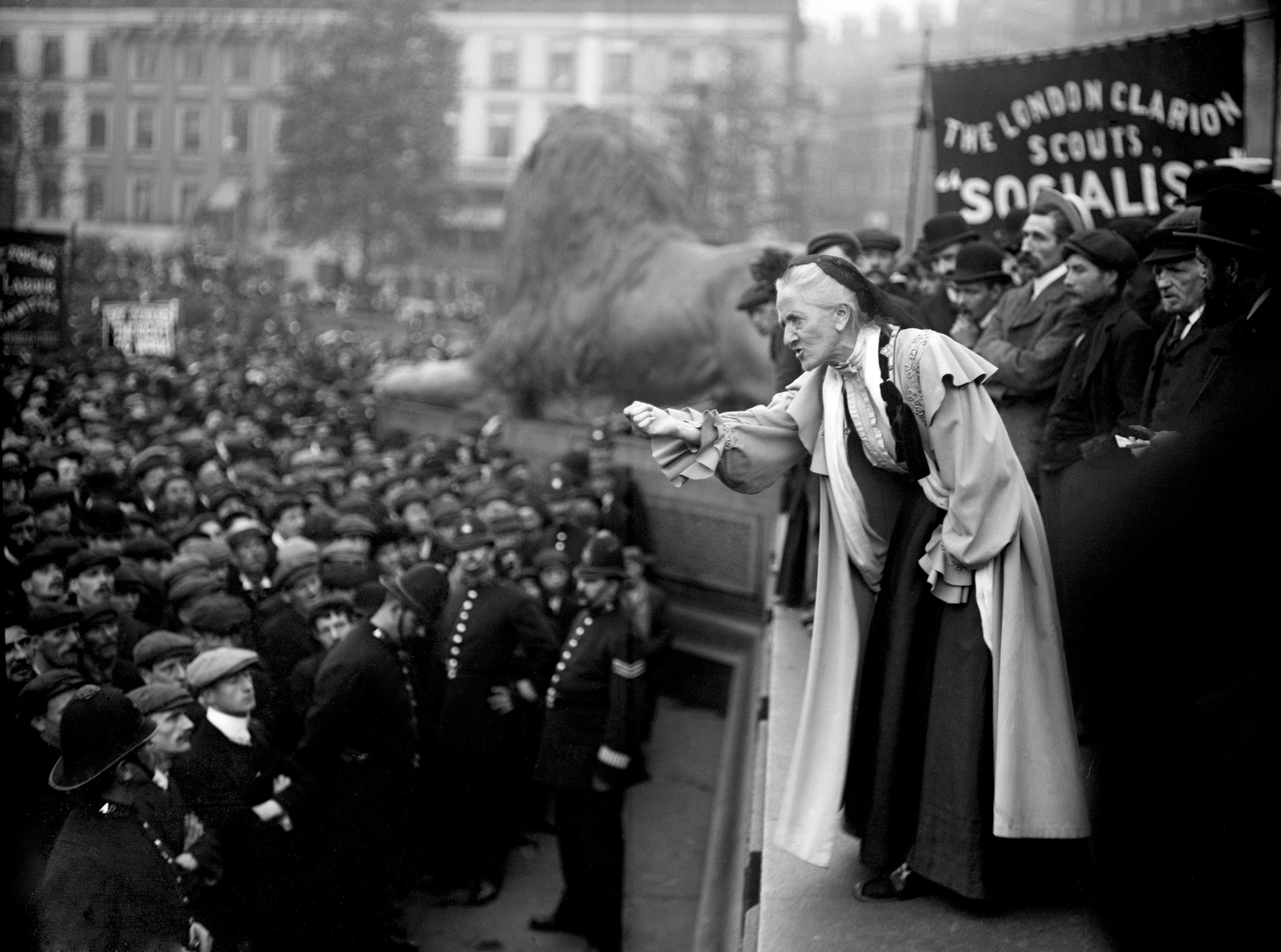 The 66 year old suffragette Charlotte Despard speaks to a crowd in Trafalgar Square. 1910. 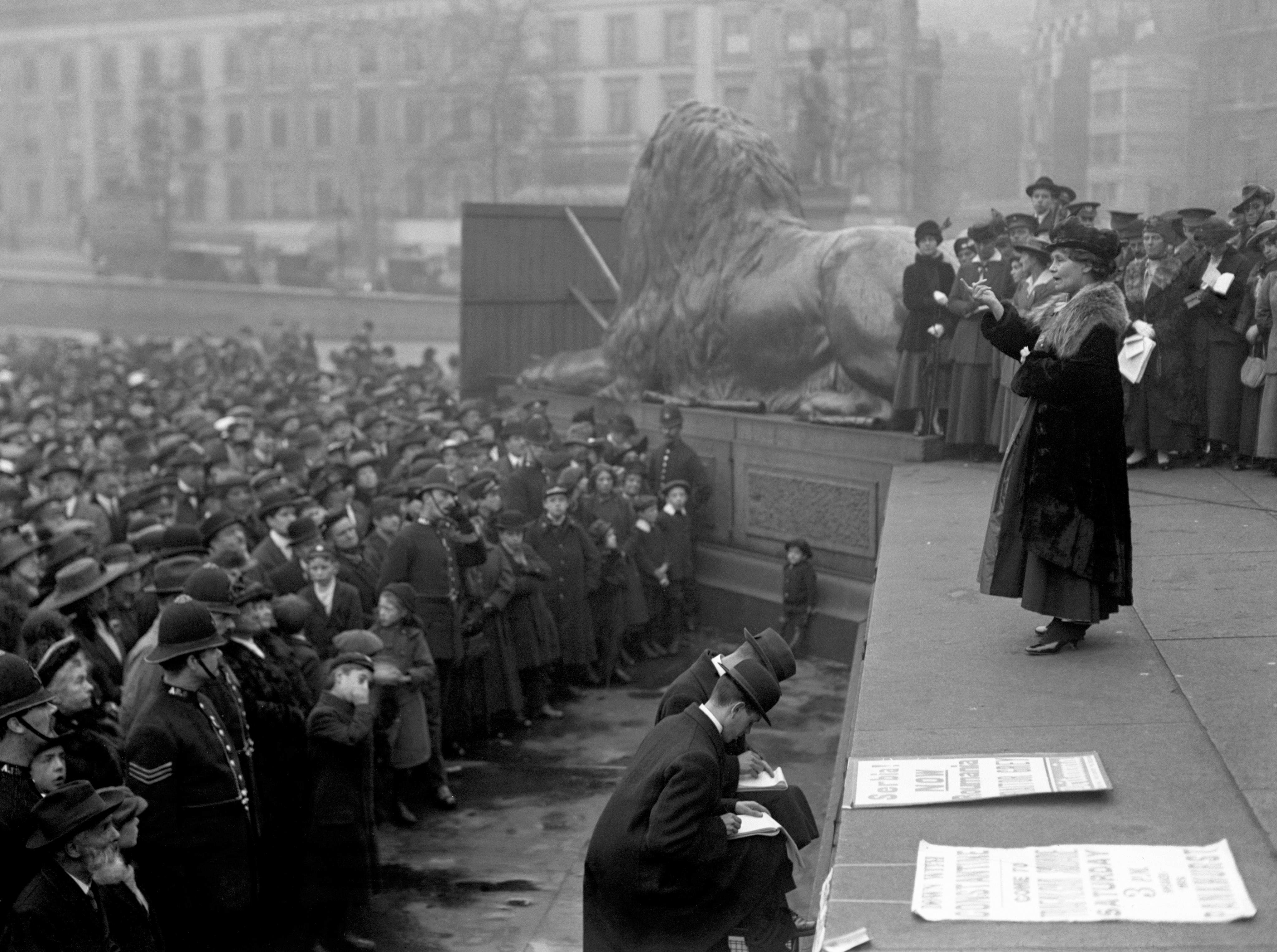 Emmeline Pankhurst joins Norah Dacre Fox speaking at a large meeting at Trafalgar Square in 1916 on the Rumanian Crisis, urging the government to support Britain’s allies in the Balkans. 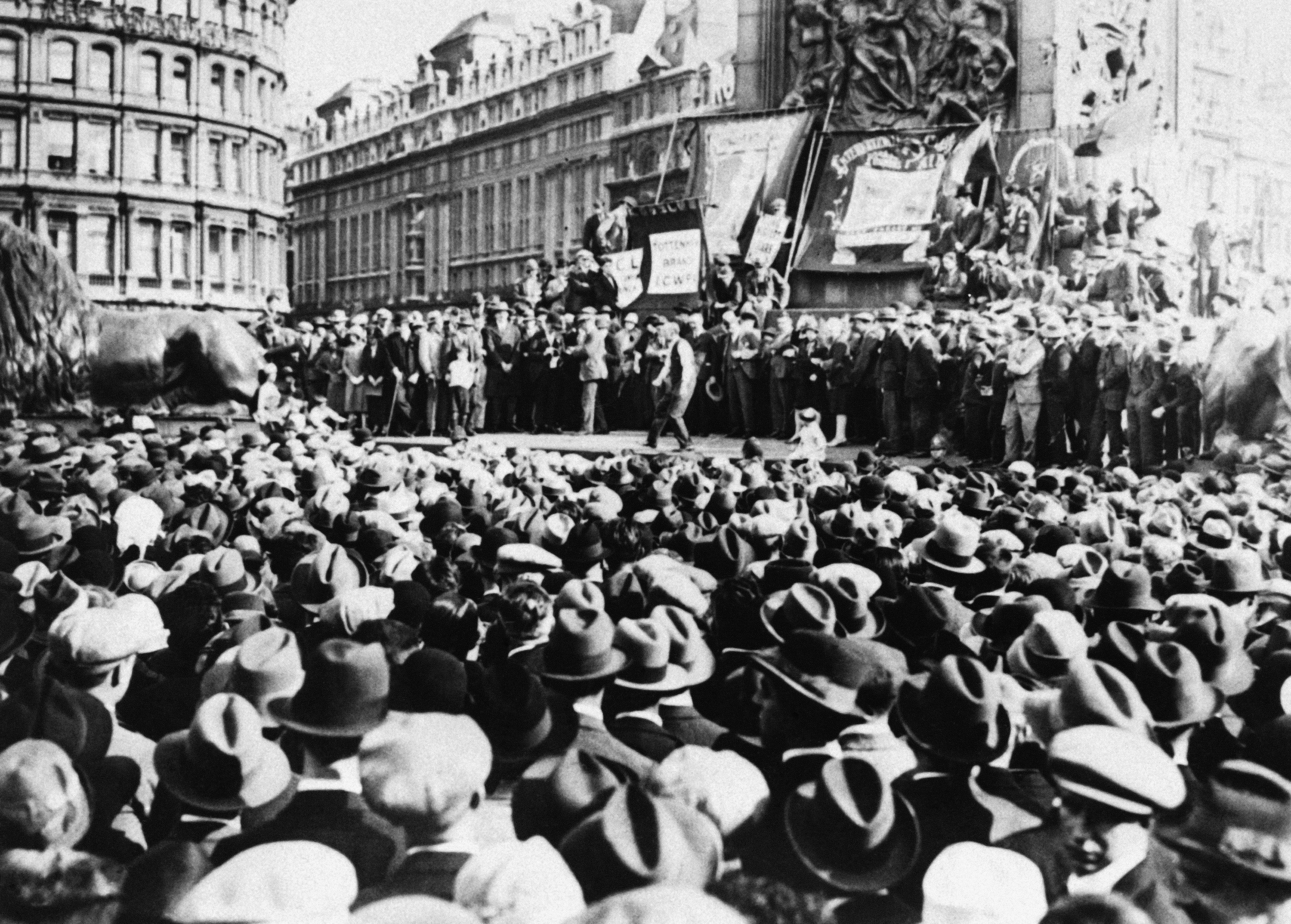 An American flag was torn by a spectator during a memorial demonstration for Sacco and Vanzetti, Sept. 26, 1927 in London which was attended by 10,000 people in Trafalgar Square. 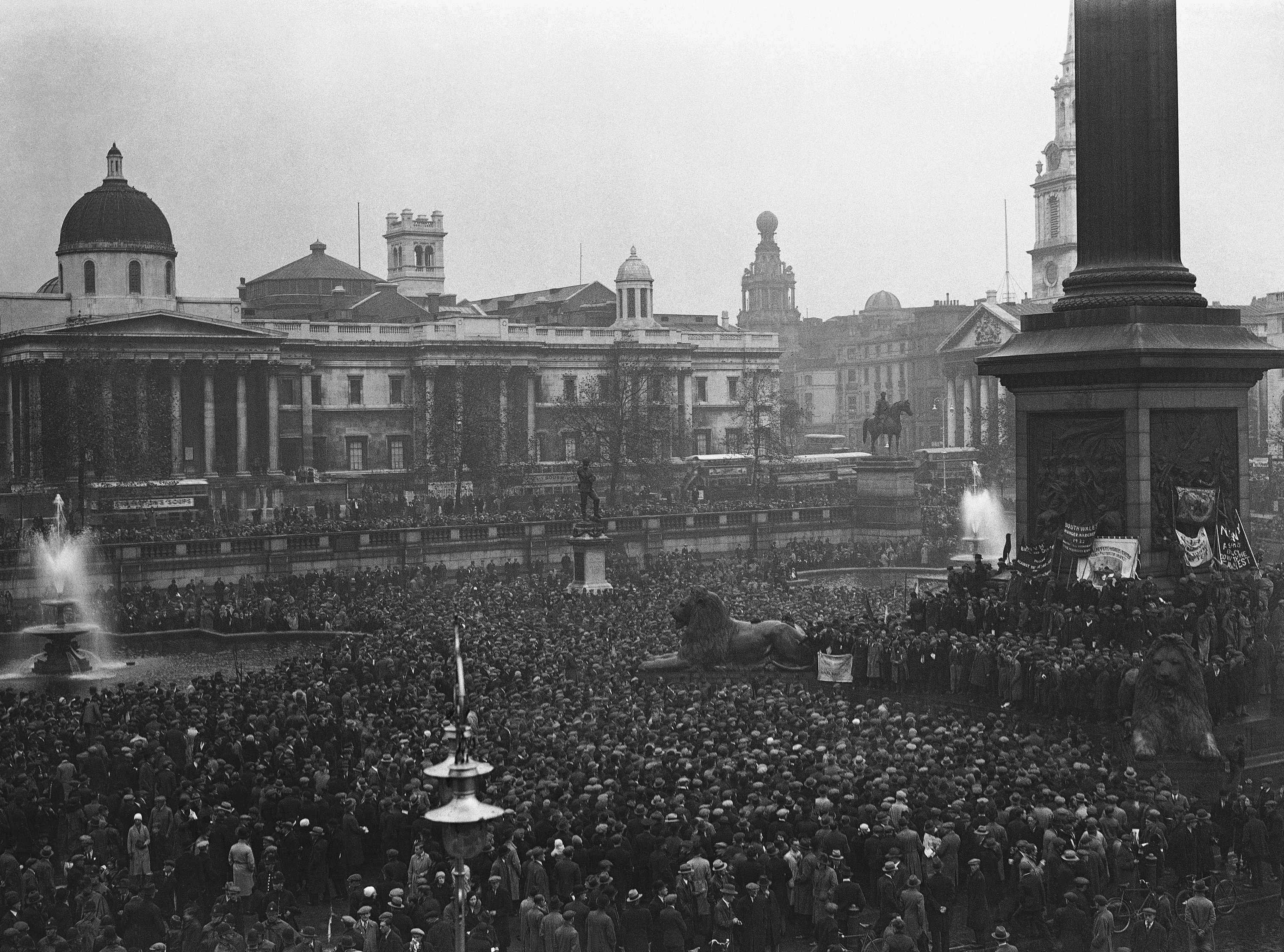 Thousands and thousands of unemployed people from all over England, assembled in Trafalgar Square for a demonstration on Oct. 30, 1932 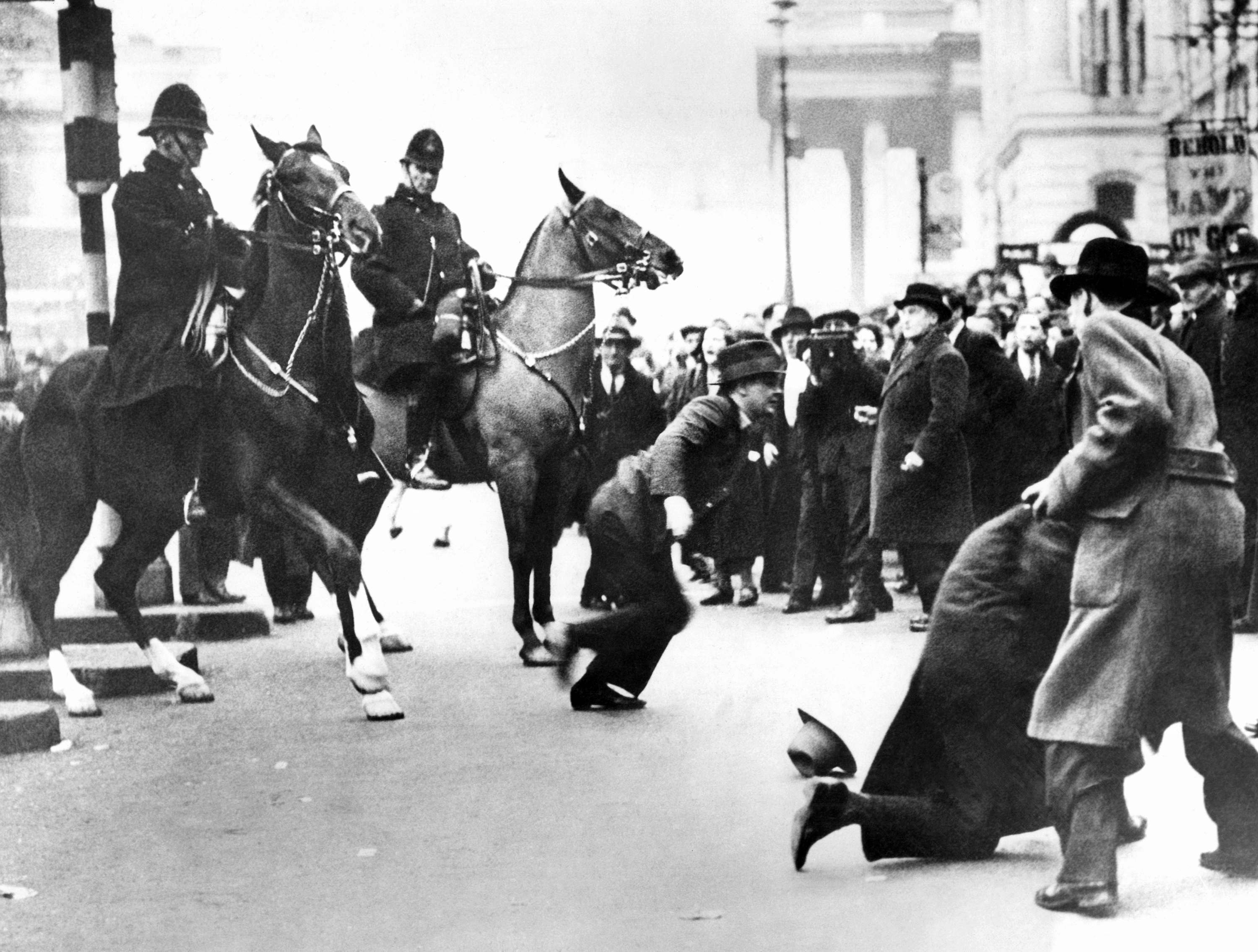 An incident in Trafalgar Square, London on March 4, 1934, when thousands of people attended the demonstration of the so-called Hunger Marchers.” Mounted police are clearing the streets, and two young men here seem to have been in the way. 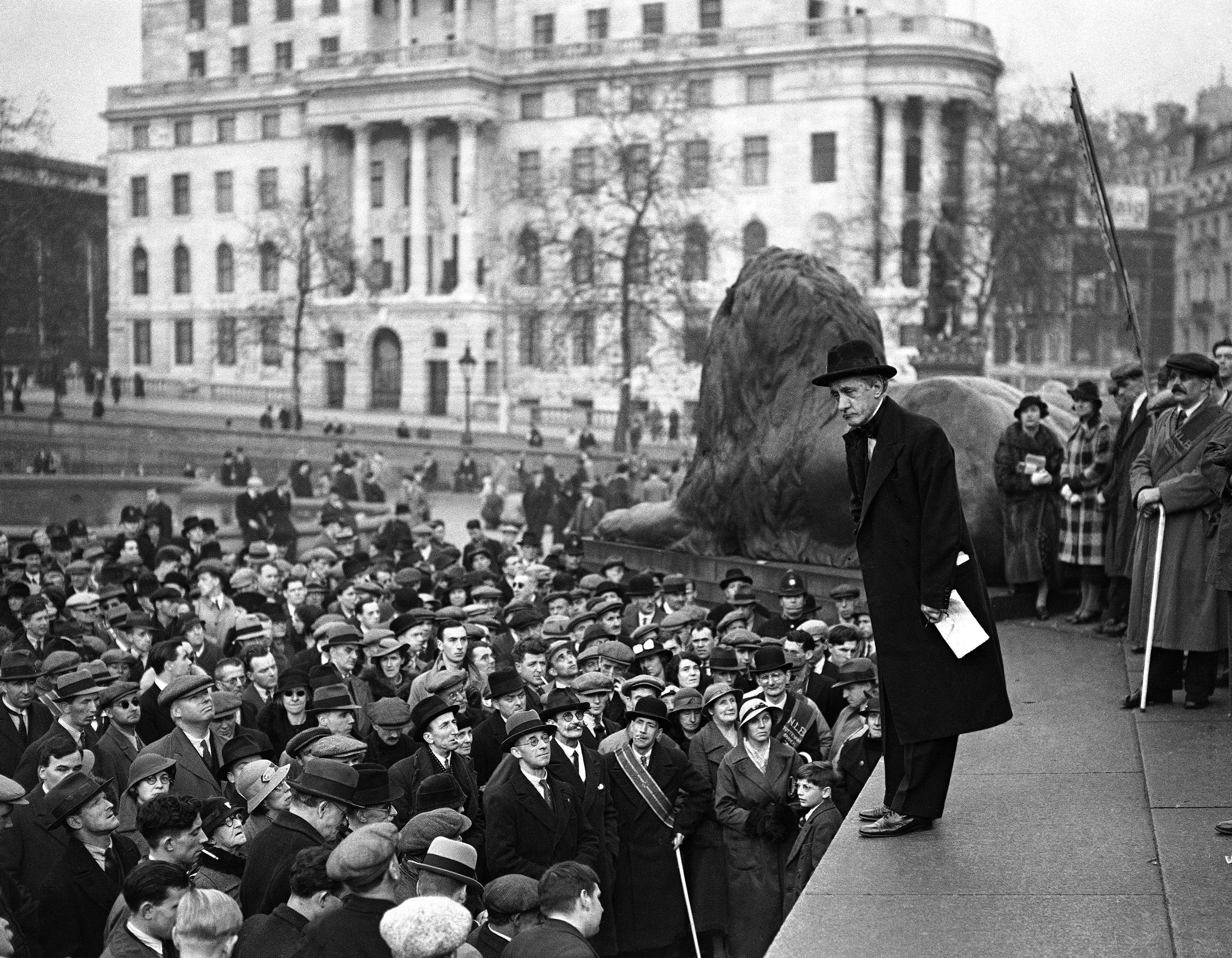 Hannen Swaffer addressing blind marchers from all over London who assembled in Trafalgar Square on Nov. 1, 1936. 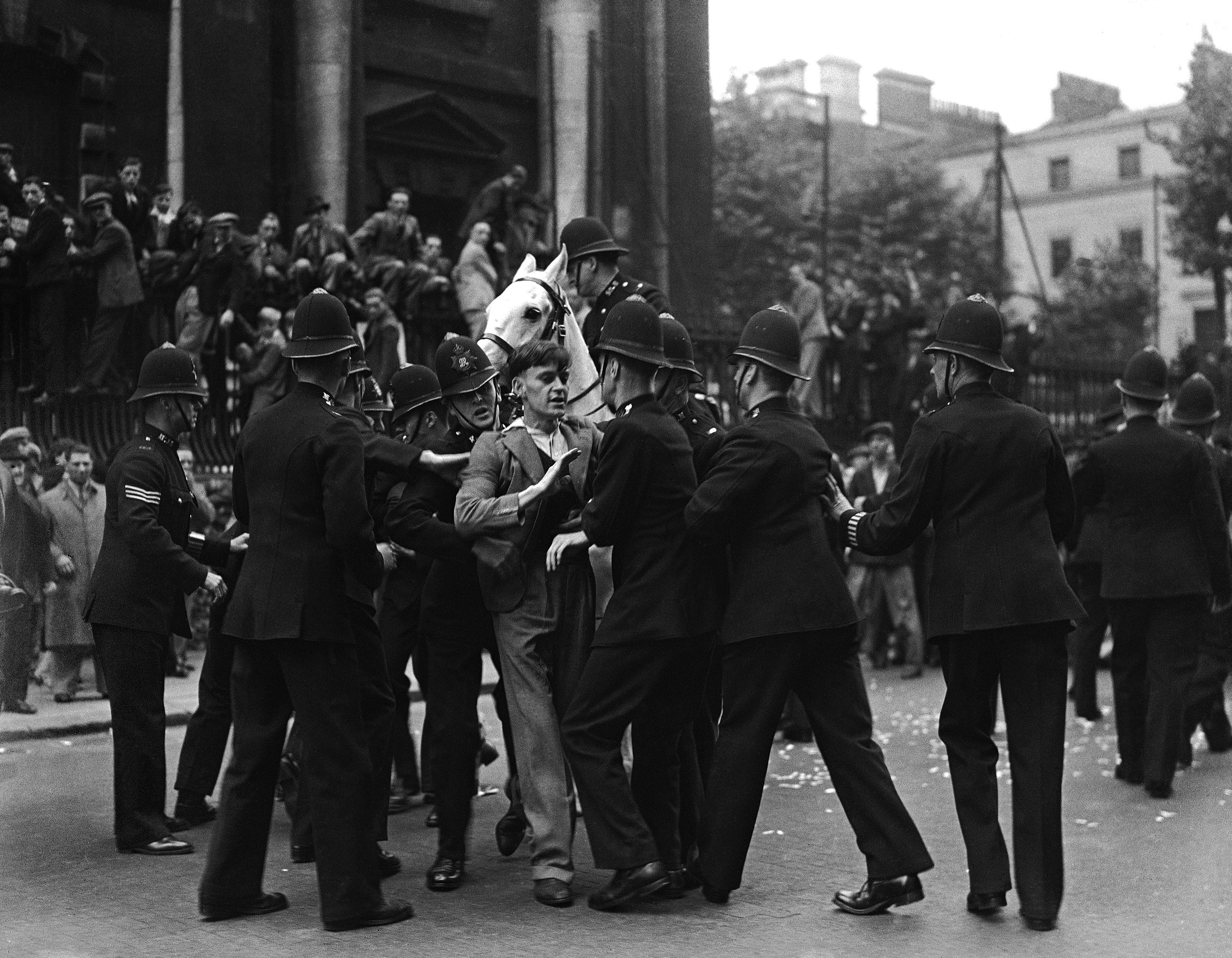 A young demonstrator struggling with police as the fascists from Kentish Town, led by Sir Oswald Mosley, marched into Trafalgar Square for their meeting on July 4, 1937. 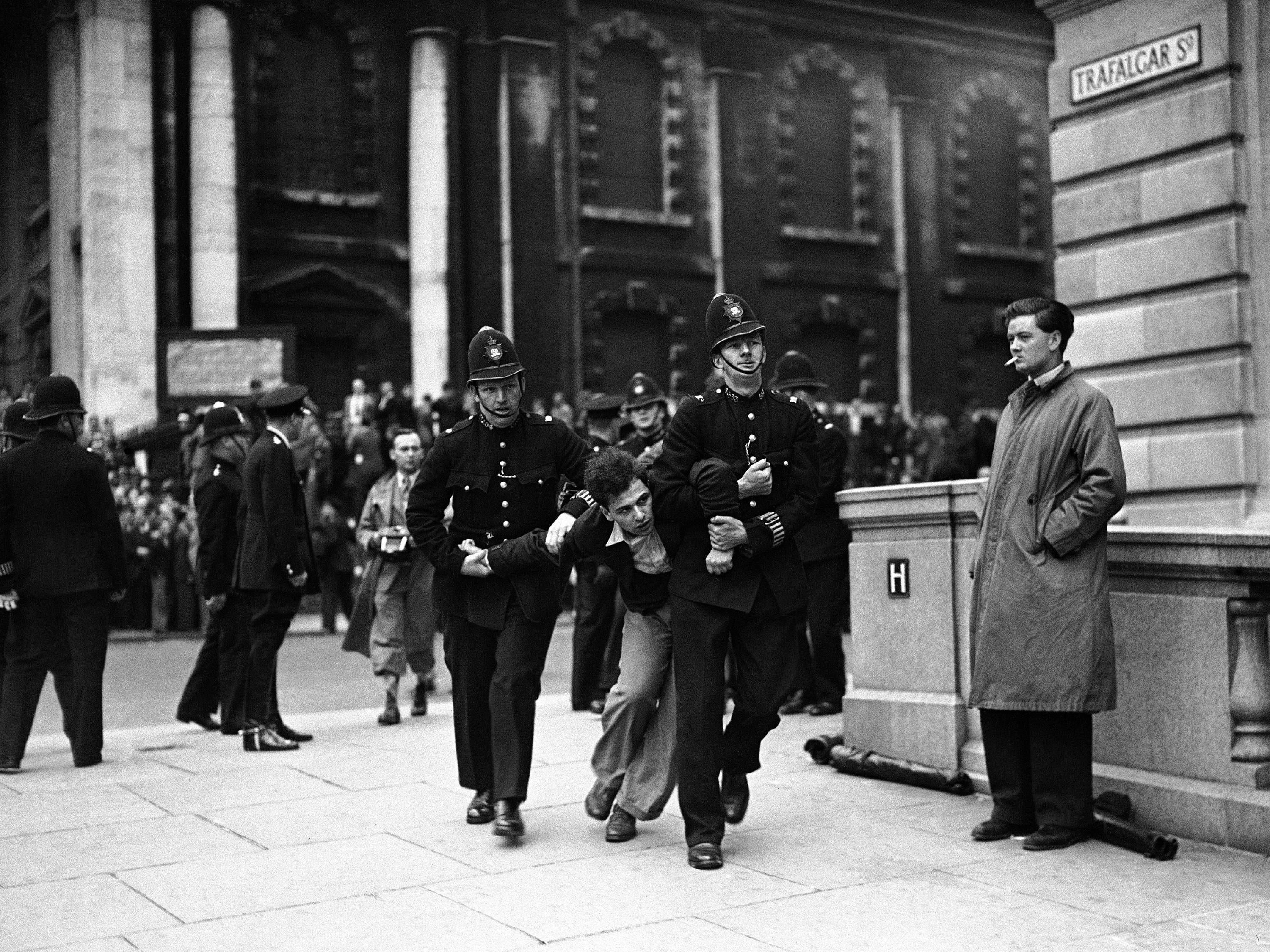 demonstrator struggling with police as the fascists from Kentish Town, led by Sir Oswald Mosley, marched into Trafalgar Square for their meeting on July 4, 1937 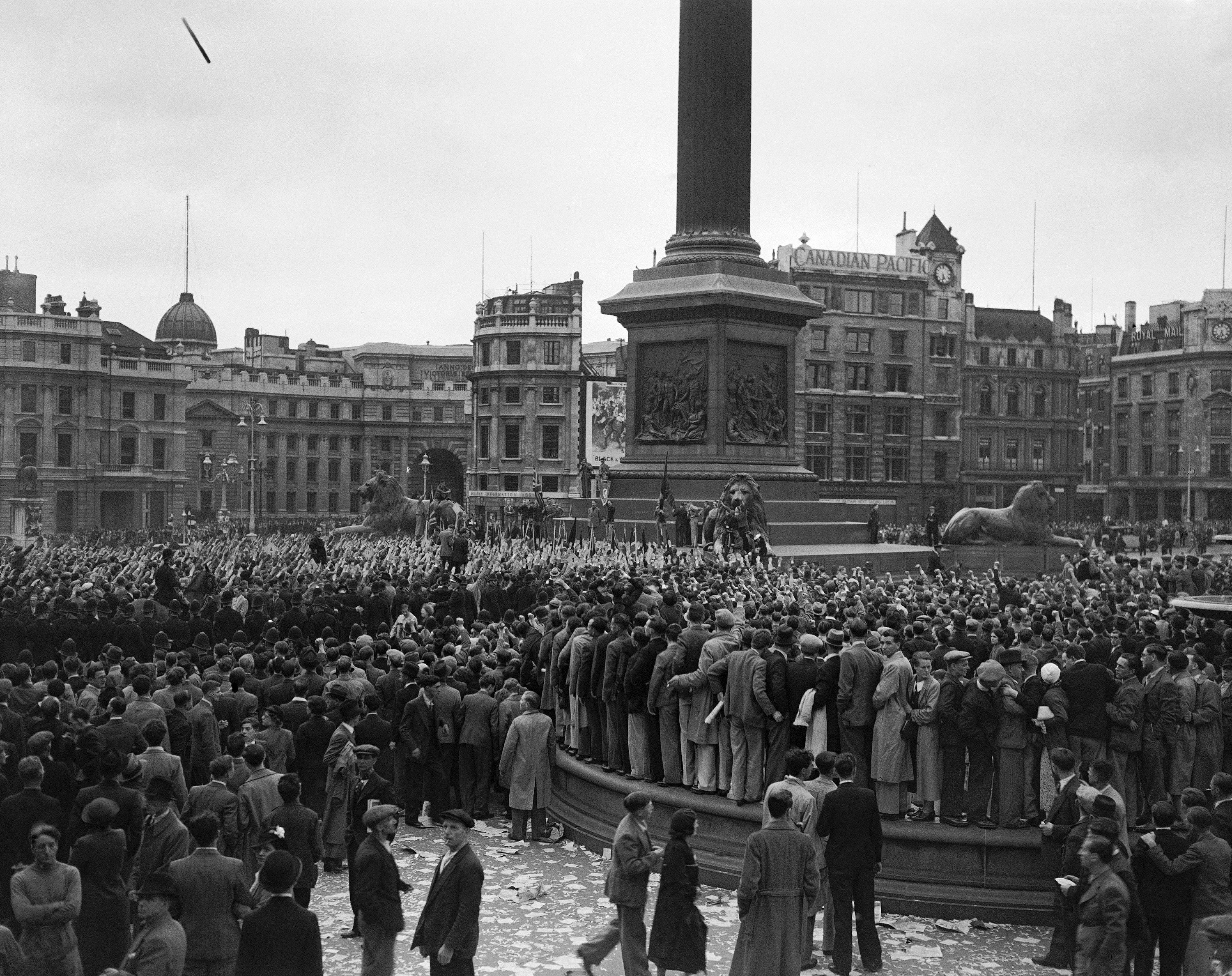 Sir Oswald Mosley’s fascist marchers had arrives from Kentish town for their meeting in Trafalgar Square in London on July 4, 1937. On one side of the police cordon communists give the clenched fist salute, while on the other side the fascists’ outstretched arms are seen. 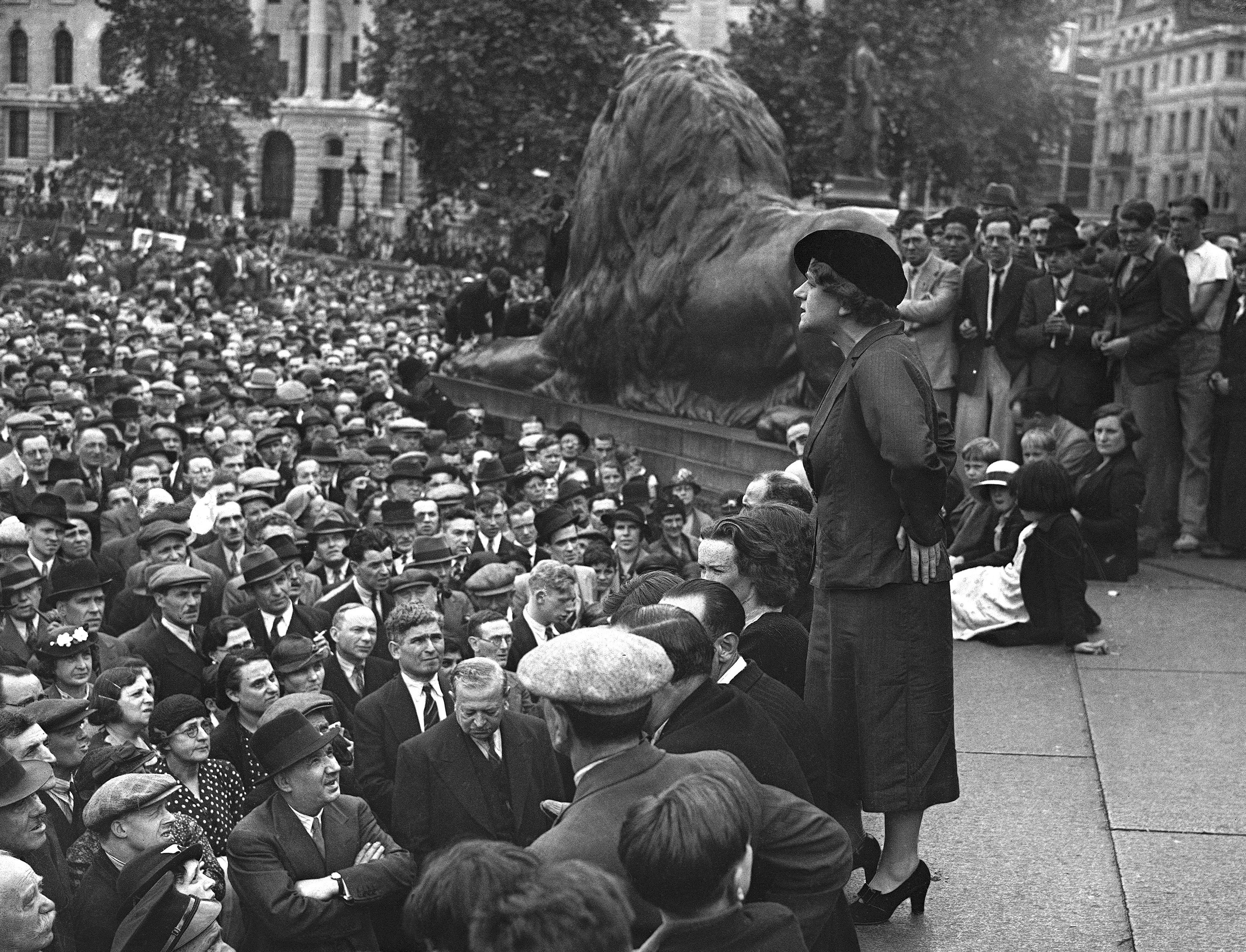 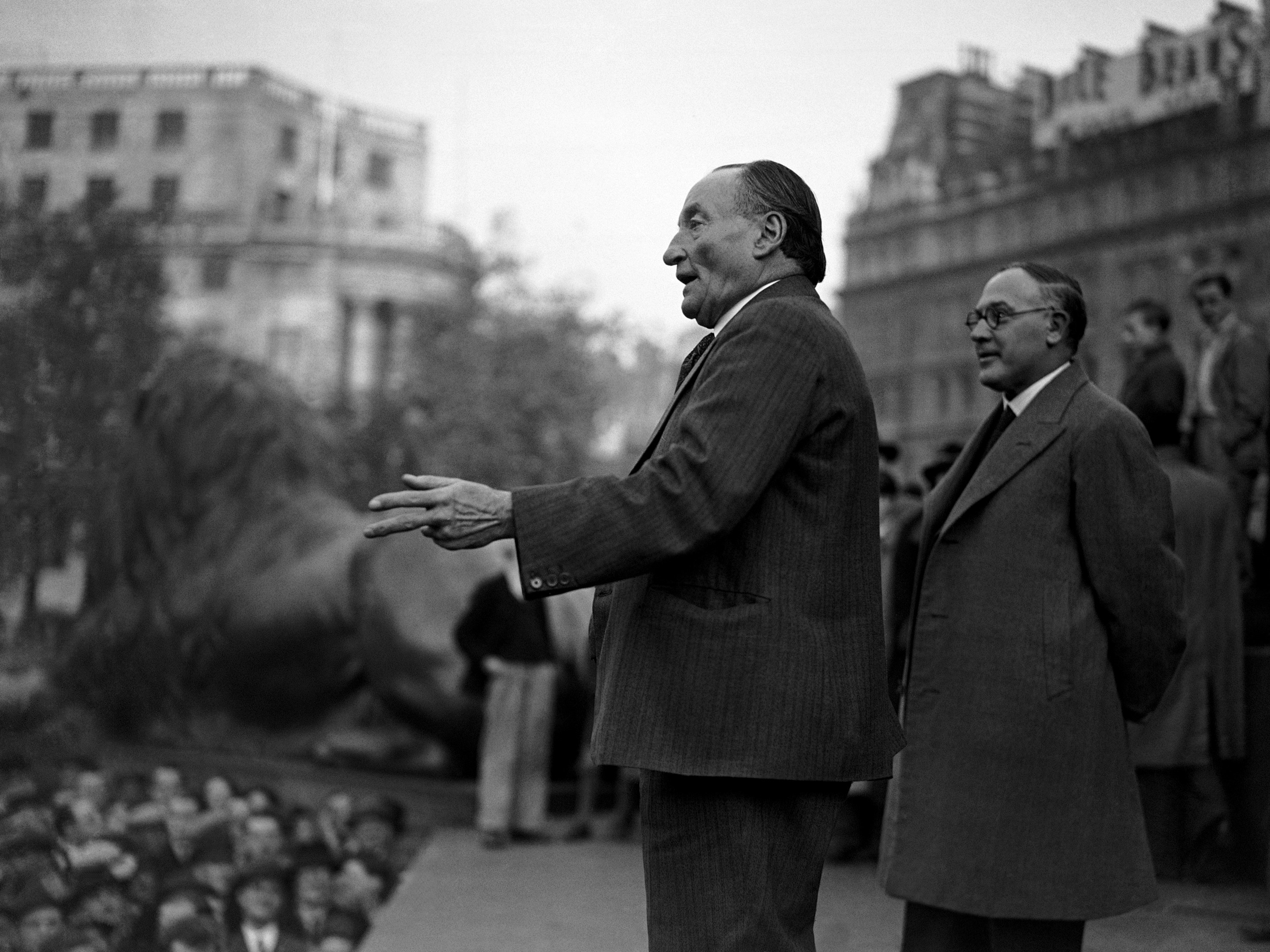 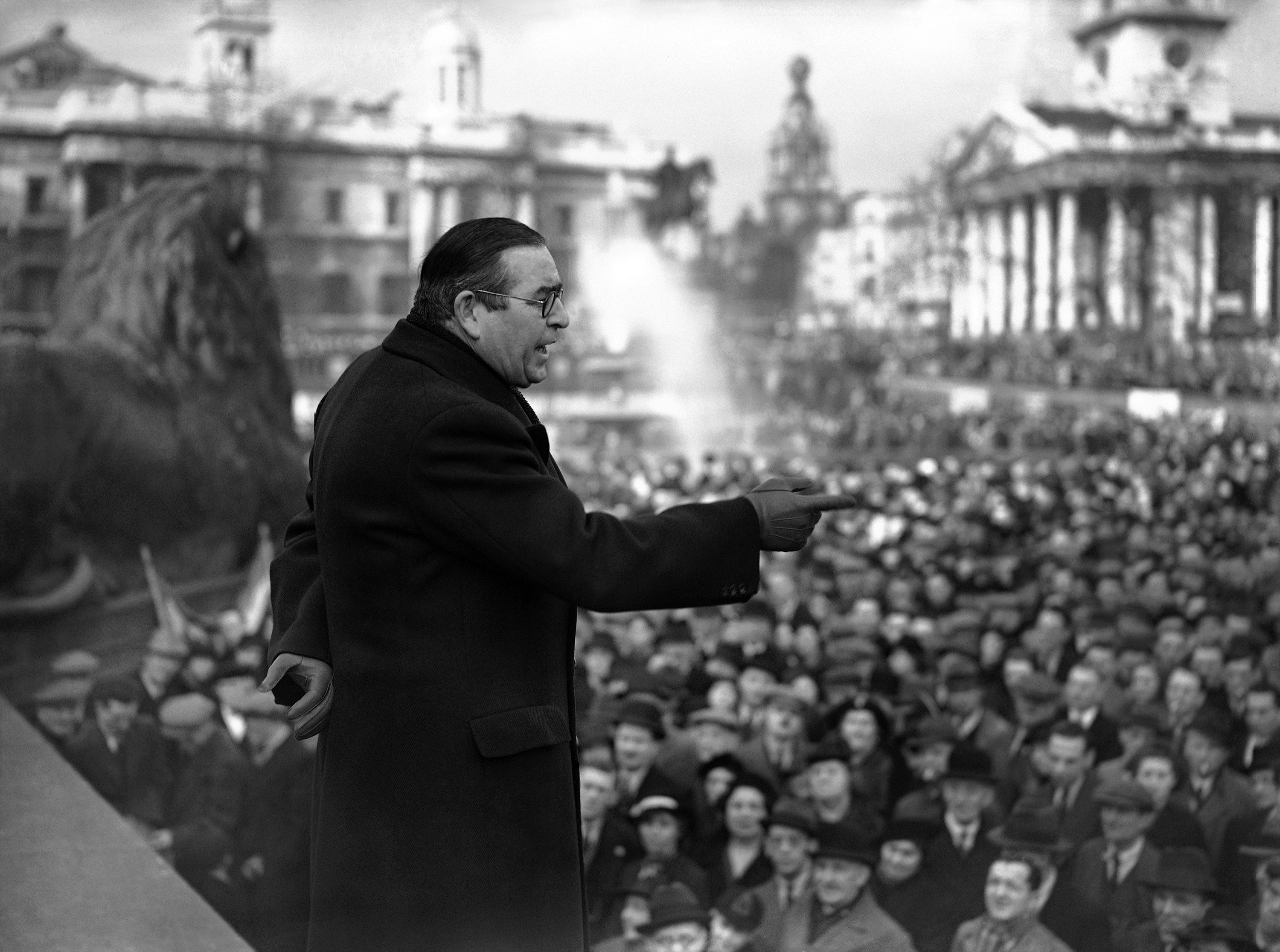 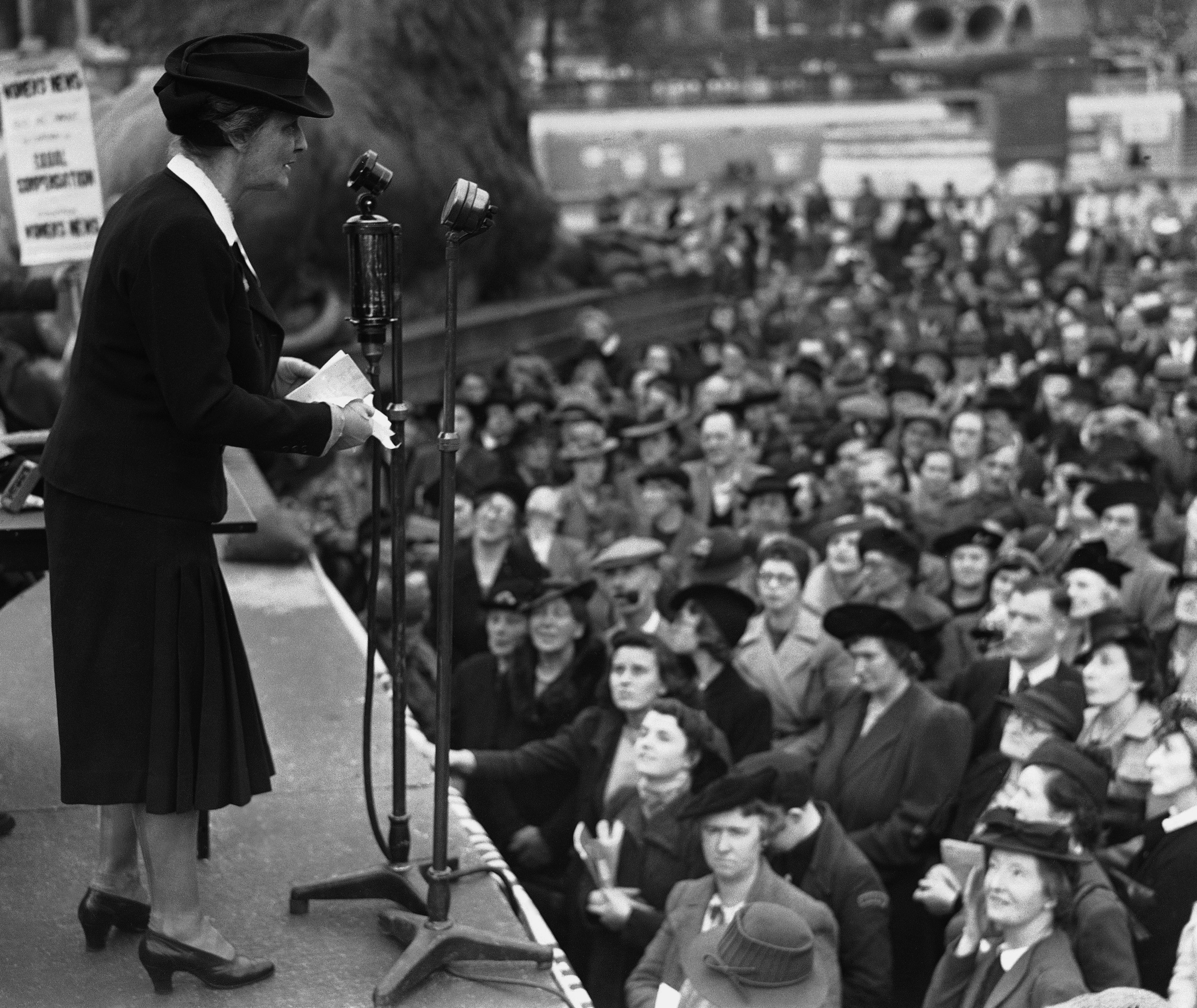 Lady Nancy Astor Member of Parliament, speaking at a mass meeting in Trafalgar Square in London on Sept. 20, 1941, to demand Equal war injury compensation for men and woman.

The Londoners forum has always been Trafalgar Square and as in peace time mass meetings are held by various groups to laet off steam. Also Hyde Park famous for its many types of soap box orators still carries on Sunday. A mass meeting for Aid to Russia demonstrations. There were two speakers at one time. Each speaking from a different side of the famous Nelson monument in Hyde Park, London, Dec. 19, 1941. 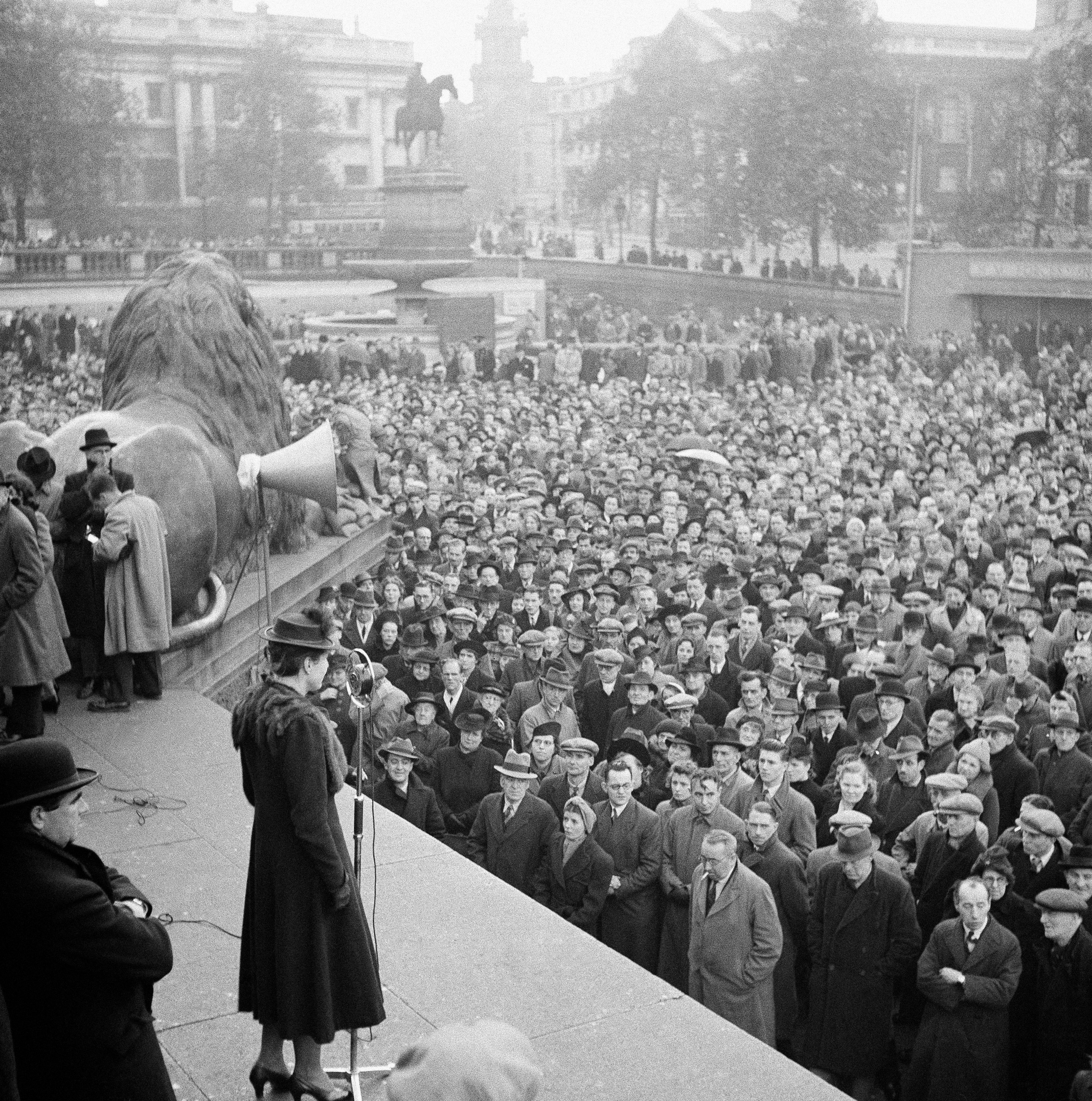 A mass meeting for Aid to Russia demonstrations. There were two speakers at one time. Each speaking from a different side of the famous Nelson monument in Hyde Park, London, Dec. 19, 1941. 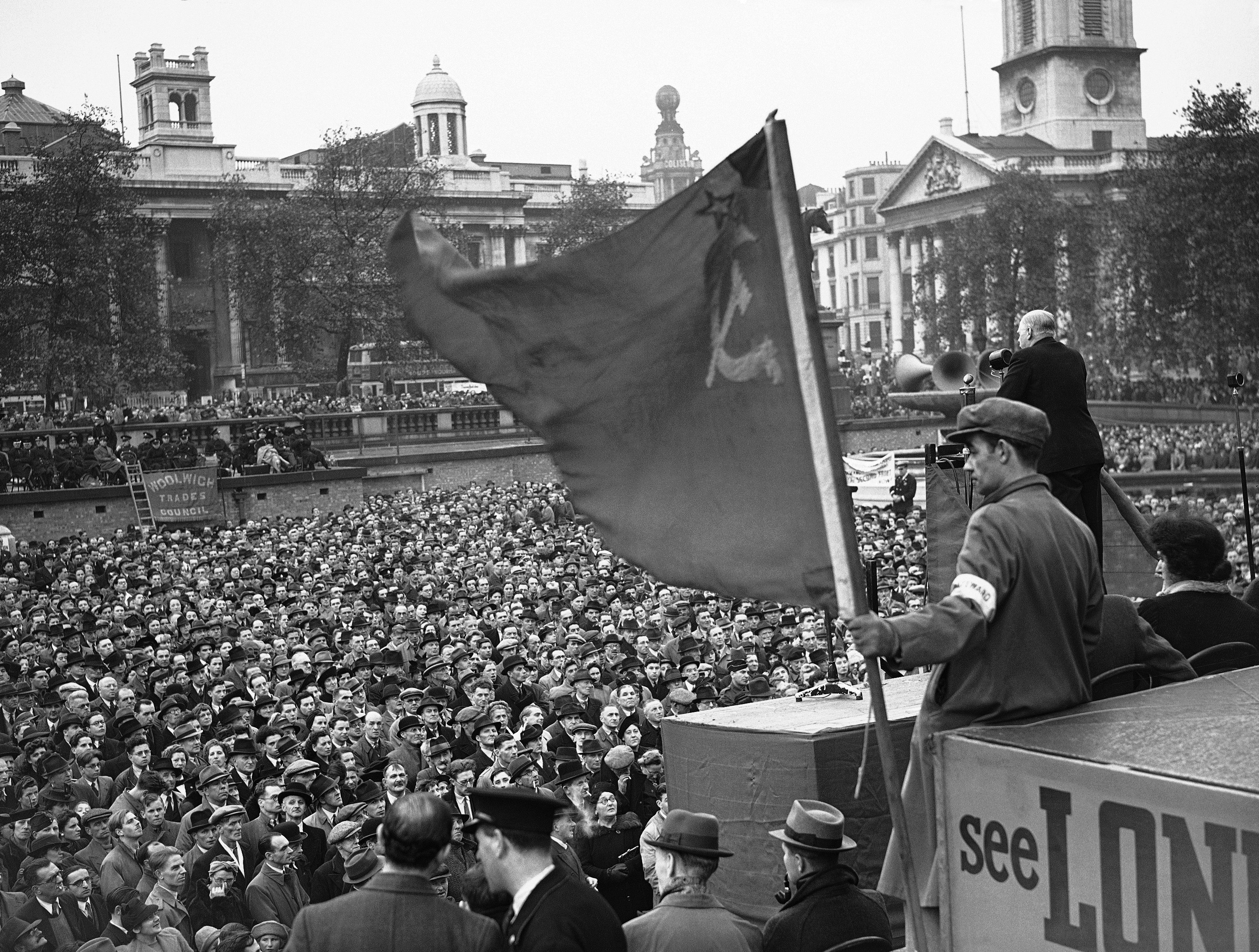 War heroes and factory workers were among those who took part in the rally in Trafalgar square, when the opening of a second front was again demanded. Thousands crowded into the square to hear the speakers who included Fred Cotton, 24 year old ex-soldier who lost both legs at Dunkirk and is now working 10 hours a day in a munition factory. A view of a section of the huge crowd with the Russian flag flying in the foreground on Oct. 25, 1942. 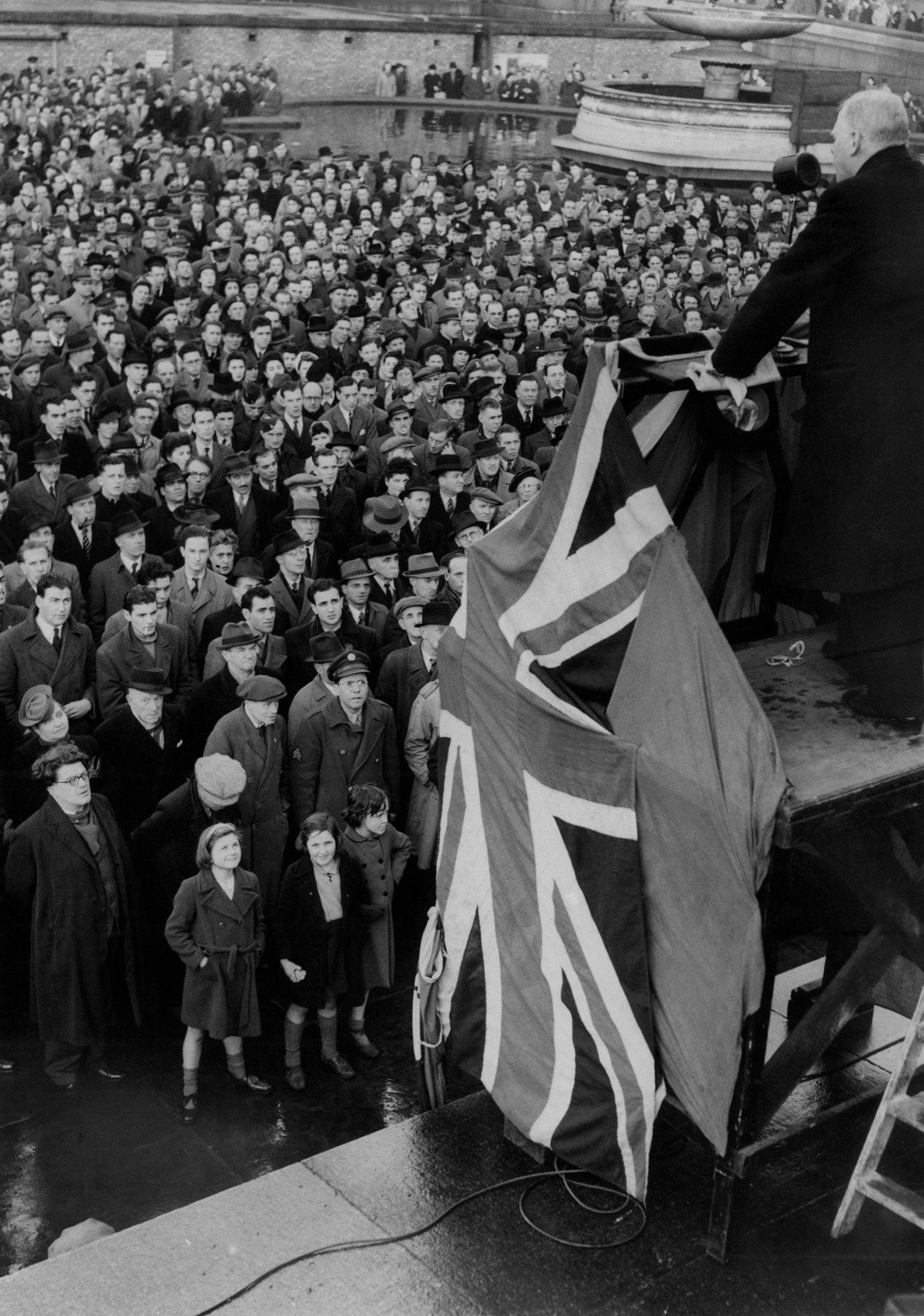 Three young girls take a keen interest in a speech by Dr. Haden Guest, Labour M.P., at a Trafalgar Square in London Dec. 21, 1944, demonstration against the Greek policy of the British government. The demonstration was attended by 10,000 people who called upon the government to refrain from using British troops against the Greek liberation forces. 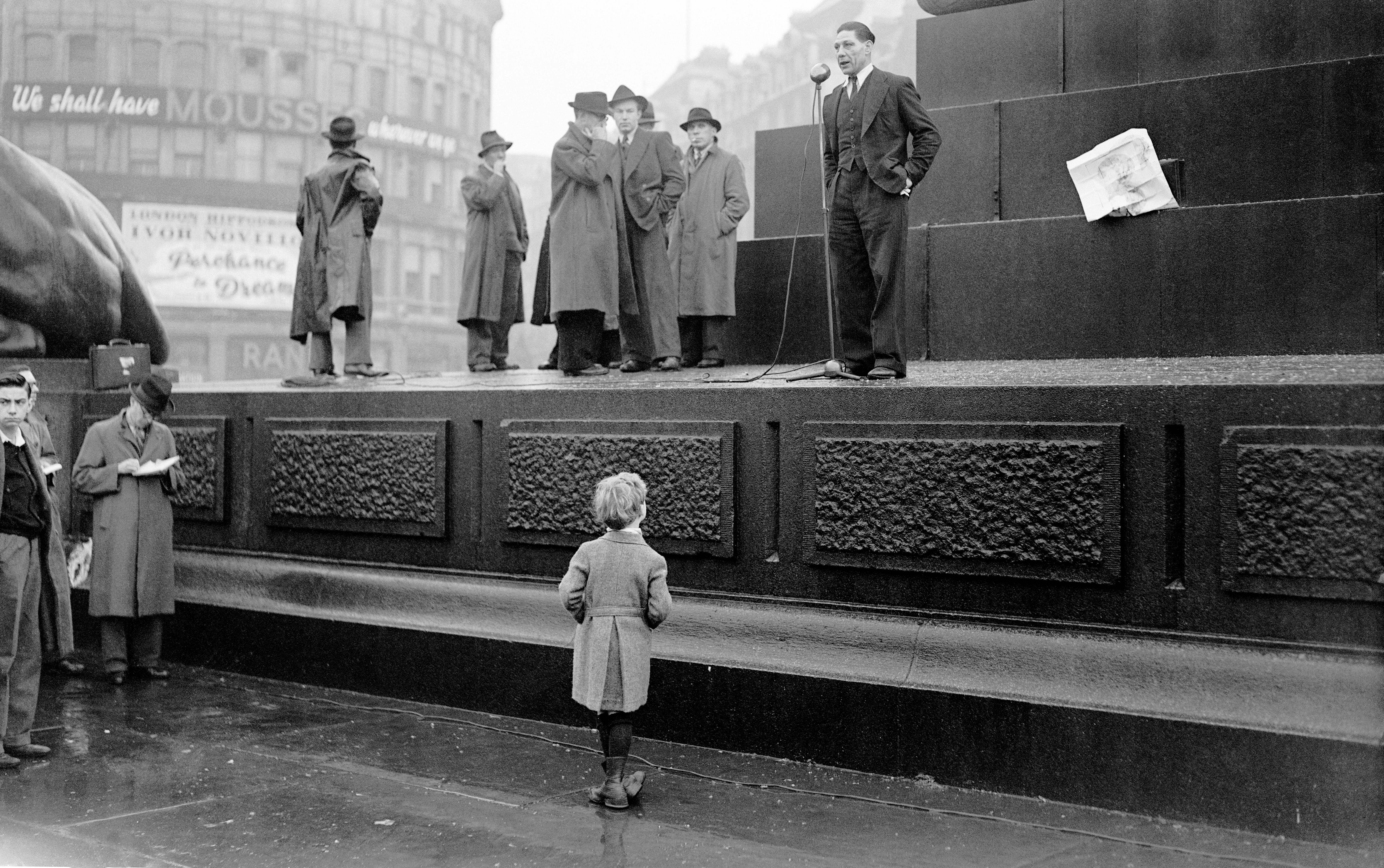 A man speaking out in support of the striking London dockers, December 1945. 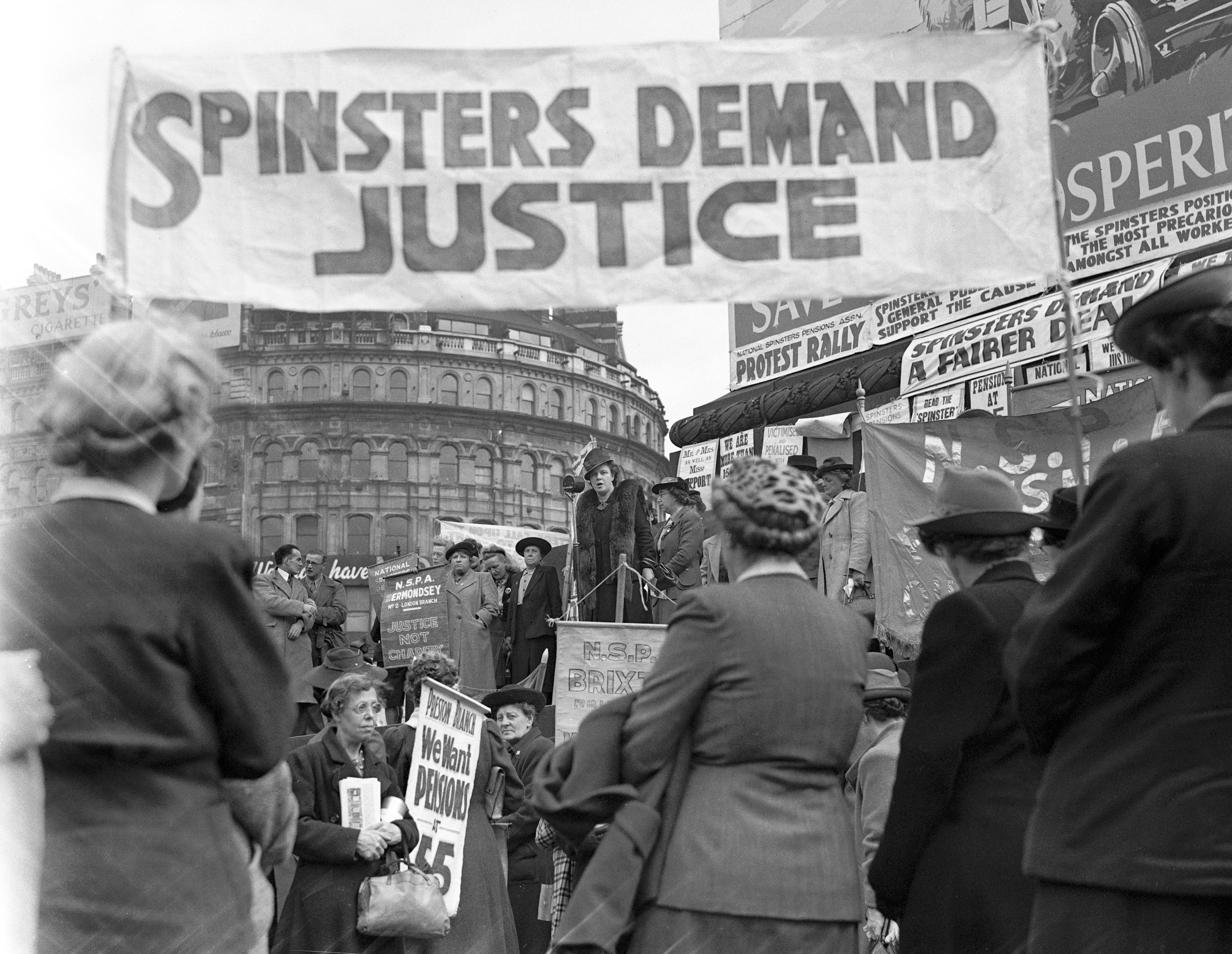 May 1946: Spinsters rally in Trafalgar Square. They were demanding pensioners at the age of 55. 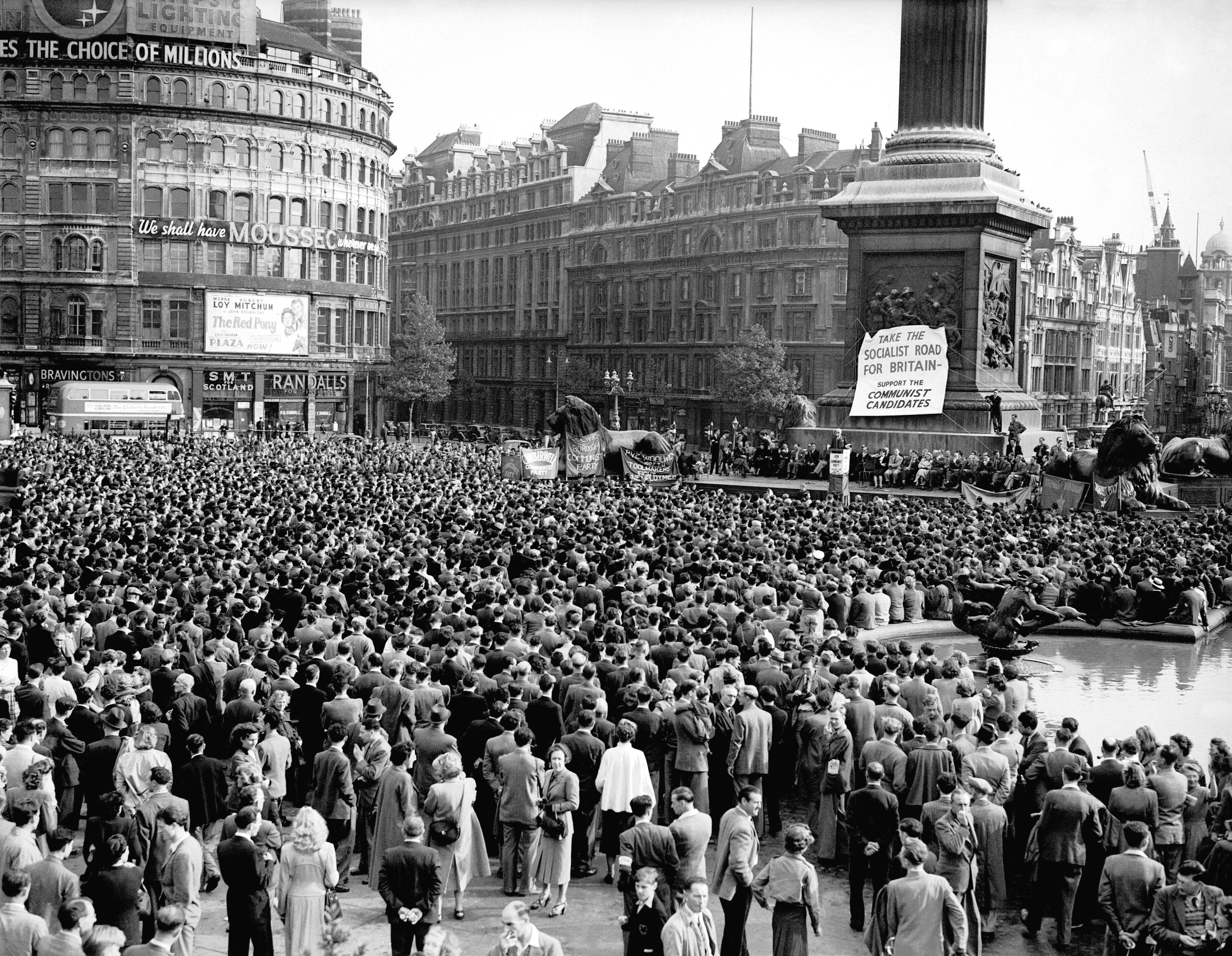 January, 1949: A huge crowd came to see Willie Gallacher, the Communist MP (he remains to this day one of only three Communist MPs elected in the UK without the endorsement of the Labour Party) launching his party’s election campaign.