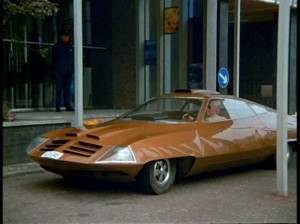 A VERY long time ago — in the late 1960s — a newspaper critic somewhere wrote what he believed was a witty joke.

He noted that the characters and performances in the live-action works of producers Gerry and Sylvia Anderson were “wooden.”

You see what he did there, right?

Gerry and Sylvia Anderson had often worked with puppets on TV series such as Stingray (1964) and Thunderbirds (1965), so this joke was no doubt a clever slam on the actors and writing in the production he was actually reviewing.

Even when they weren’t puppets, Anderson characters were about as real as puppets, the joke went.

In this case “wooden” might be defined as simply “stiff and unnatural” or “without spirit or affect.”

For literally decades now, this joke about “wooden’ characters and performances has been mindlessly regurgitated, and applied to what sometimes seems every Anderson review imaginable.

But the question we must now ask is, simply: is the oft-repeated slam actually true?

Or is the over-used “wooden” descriptor just a form of conventional wisdom that has gone unquestioned for so long that it has now become mindlessly accepted?

To better answer that question, I respectfully submit below the five “real” people you may meet in the live-action productions of Gerry and Sylvia Anderson.

I consider “real” (as opposed to “wooden”) to mean in this context that the characters showcase a sense of verisimilitude.  They closely resemble people you have encountered and may know in life.

Similarly, a “real” person is someone replete with contradictions and failings (rather than just an affectless avatar for “wooden” dialogue or exposition).

In other words, these folks may look like one thing, but when you scratch the surface a bit you find there is something deeper, and maybe even a little conflicted going on inside. 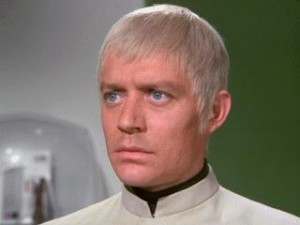 In the far-flung year of 1980, Commander Ed Straker (Ed Bishop) in UFO (1969-1970) is the head of SHADO, a secret organization dedicated to fighting alien invaders. Straker is a respected leader, and absolutely uncompromising in terms of his expectations for his people.

Yet for every victory Straker wins in the war against the malevolent extra-terrestrials, he faces a defeat on the home front.

One episode of the series “A Question of Priorities,” explores his relationship with his estranged son, John (Barnaby Shaw), and his ex-wife (Suzanne Neve).

Straker has the opportunity to help his son in an emergency, but, at the last moment, he must step away and fight the big war rather than the personal one. As a result, Straker’s son dies, and his wife, Mary, vows never to speak to him again.

Another episode, “Confetti Check A-OK,” is a flashback story that reveals how Straker’s marriage to Mary went south at exactly the time he accepted his role as commander of SHADO.

UFO thus suggests a deeply unpopular idea in modern times: you can’t have it all.

Instead, there is a balance that must be maintained, and for each marker of success, a marker for defeat goes alongside.  Straker is a great hero and yet an eminently sad man because he has alienated and lost everyone outside the “job.”

Haunted by this fact, later episodes of the series such as “Mind Bender” and “Time Lash” reveal Straker on the veritable edge of psychosis, fighting his way back to sanity only because of his self-acknowledged “bloody-mindedness.”

If Straker were a “wooden” or unreal character, we would see no yin and yang.  There would be no such balance in his life. He would fight for the cause and be happy at home too.

But the fact is that Straker is not hot happy — and can never be happy again — because he has sacrificed love and family to save the Earth itself. 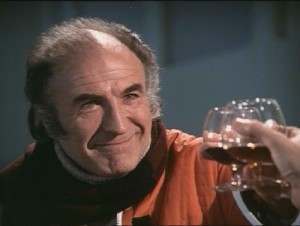 2. Victor Bergman: The Man With No Heart has a Lot of Heart

Professor Victor Bergman in Space: 1999 (1975- 1977) is a man who has an artificial or mechanical heart. His name “Bergman” could be interpreted, literally, to mean man of ice.  And if you read the novelizations based on the series, that’s how the character is portrayed in literary form.

But Victor is not a man of ice, a man without emotions (because he lacks “heart”) in the actual TV series.

On the contrary, Bergman is revealed to be a man of great wisdom, loyalty and love.  In “The Black Sun” for instance, he shares a final drink (of scotch…) with Commander Koenig (Martin Landau) on what could very likely be the eve of their death.  Their moon is headed into the event horizon of a black hole, and chances for survival are grim.

Yet when Koenig toasts to everything that might have been, Victor counters with a toast to “what was,” an emotional and very human recognition of the journey the duo has traveled together.

In the same episode, this rational man of science with respect and humility discusses the idea if not directly of God, then of a “cosmic intelligence.”

Again, if “reality” or verisimilitude equates to contradictions, then Victor is very real indeed.  The man who should have no emotions instead wears them on his sleeve.  The scientist who should discuss only hard science is willing to ponder metaphysics. 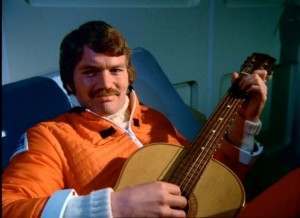 3. Paul Morrow: The Controller Out of Control

Also in the aforementioned Space: 1999, Prentis Hancock plays Paul Morrow, the controller (or manager, essentially…) of Main Mission on Moonbase Alpha. On the job, Paul seems a fairly rigid and disciplined fellow.  He doesn’t reveal much of his internal self.

But in situations outside the norm, Paul is revealed to be a person…of surprising layers.

In the aforementioned “Black Sun,” for example — with the clock ticking down towards destruction — he returns to his cabin, alone, and plays his guitar.  Previously, audiences had no indication of Paul’s musical bent.

And when another Alphan, –Tanya (Suzanne Roquette)–  asks if she can share the “music” with this very private man, Paul answers in the affirmative.  The efficient controller is gone, replaced by a man willing to reach out.

Later, in an episode called “The Last Sunset,” Paul reveals his love for data analyst Sandra Benes (Zienia Merton).  He also loses his hard-fought sense of control because of exposure to hallucinogens on the surface of the moon (which has been rendered habitable by alien probes).

Again, the man who could be mistaken for the world’s toughest manager — or even a military martinet — reveals that, unloosed, he possesses quite an imagination.  In his “spaced out” ramblings under the influence of the ‘shrooms, he imagines a glorious future for the Alphans…

If Paul were just the “wooden” underling none might expect, we would not see such depths and contradictions. 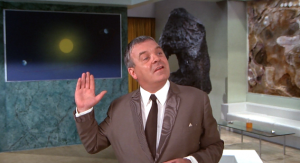 2. Jason Webb: The cut-throat, wheeling-dealing administrator who fights for a good cause

Let’s face it: few of us tend to like managers, or politicians.  Many of them see power as not a means to an end, but as an end in and of itself.

But in Journey to the Far Side of the Sun (1969), we meet a bureaucrat who wheel-and-deals not for personal gain, not for wealth and power, but for the advancement, actually, of the species.  Jason Webb (Patrick Wymark) of EUROSEC wants to explore a planet discovered on the opposite side of our star, Sol.  He needs the money to do it, and America is not willing to contribute.

So Webb allows for EUROSEC — his organization! — to suffer a security leak. The Russians learn of the “new” planet, and now it’s a race to get to it.  “You wouldn’t want anyone else to get there first, would you?” he asks a United States administrator, creating, essentially, a new space race.

Importantly, this space race will benefit man’s knowledge and learning about the cosmos.

So Webb is ruthless in his desire to achieve a goal, so much so that he would make his own “command,” essentially, look bad.  And that goal is not one of wealth or prestige, but exploration.

Again, this is the duality or conflict we see frequently in the characters of live-action Anderson productions.  The characters don’t behave woodenly at all…they reveal layers and contradictions.

Similarly, at the end of Journey to the Far Side of the Sun, many years have passed, and Webb — now wheelchair-bound — is haunted by the mission’s failure.  And once more, it’s not what the mission’s failure means to him as a human being, it’s what it means to the human race that so tortures his final years. 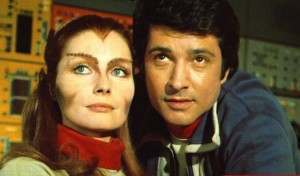 5. Tony and Maya: The office flirts

There’s nothing deep about the possibly clichéd character type of the “office flirts” — two people highly attracted to one another, but not moving on that attraction for fear of harming a working relationship.

But again, a character doesn’t need to be “deep” or “original”
simply not to be wooden.  He or she just needs to demonstrate passion, the opposite quality of “stiff” or “without spirit.”

In both cases, these young “couples” go through a kind of delicate courting dance, caring for one another and then withdrawing to their separate corners when that attraction grows too powerful.

Again, I’m not arguing that the office flirts are original or layered as a type, only that they add passion — the aforementioned sense of spirit — to their respective series.  Certainly, the office-flirts prototype was a strong enough character structure to be resurrected on Star Trek: The Next Generation with Riker and Troi fulfilling those roles. 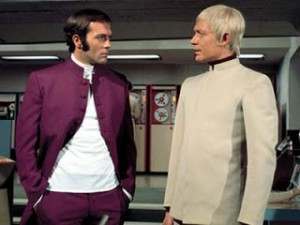 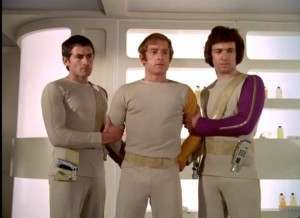 I’ve limited the list here to five character types, but the list could go on to include more characters from the Anderson canon too.

For instance, both UFO and Space: 1999 feature sort of “playboy” pilots — Paul Foster (Michael Billington) and Alan Carter (Nick Tate) — who demonstrate a depth of character beyond their “surface” love of flying machines….and womanizing.

Both men are fiery and temperamental. And though fiercely loyal to their commanding officers, they aren’t afraid to speak their minds, either.

They are within the command structure, in other words, but these pilots do not blindly follow orders (as we see of Carter, for instance, in “Black Sun,” or in the coda of “Mission of the Darians,” when he explicitly questions Commander Koenig.)

In short, none of these characters are without spirit or affect, or in the slightest bit, wooden.

Instead, the characters of live-action Gerry Anderson productions actually qualify as being quite realistic, rather than melodramatic…a quality that is perhaps the norm in science fiction television.