“Oh, my, what a strut. If only this man had been born in the barnyard. What a rooster he would have made”
– Ringside reporter watching Gorgeous George 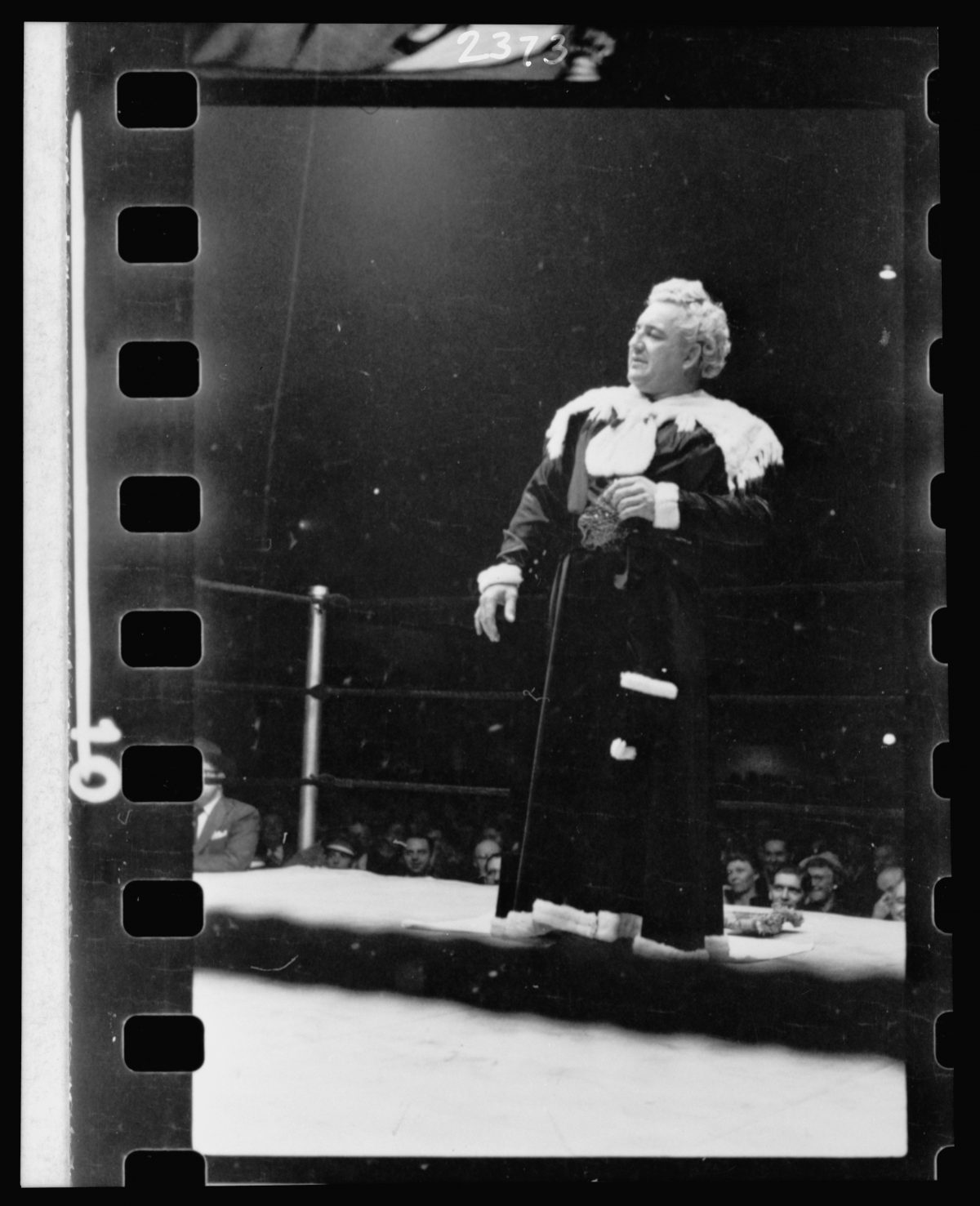 “Oh, isn’t he gorgeous,” cooed a woman in the audience as wrestler George Raymond Wagner (March 24, 1915 – December 26, 1963) made his way to the ring for a bout. He liked the sound of it.  And so began the career of Gorgeous George, a 56ft 9in high wrestling, bottle-blonde Xanthus. In his persona as ‘The Human Orchid’, Gorgeous George wore pink satin, silver lamé, chiffon, lace, lily-white shoes and ermine. His entrance was hailed by the PA thus: “Ladies and gentlemen, Gorgeous George refuses to enter the arena until everyone is standing, in a show of respect for the Human Orchid.”

Gorgeous George approached the ring accompanied by the strains of Pomp and Circumstance as his chief valet, ‘Jeffries’, scattered rose petals and spritzed the canvas with Chanel No. 5 perfume. Wagner referred to his brand as “Chanel #10” – “Why be half-safe?” he quipped. Moreover, George required that his valet sprayed the referee’s hands before the official was allowed to check him for any illegal objects, which thus prompted his famous outcry “Get your filthy hands off me!” Jeffries would then remove the gold-plated pins holding the Gorgeous curls in place, and the wrestler would toss them to fans in the audience.

Gorgeous George, like a pneumatic Basil Fotherington-Tomas from cartoonist Ronald Searle’s Molesworth books, was a sneaky, cowardly persona and enjoyably dislikable for it. As John Capouya wrote in Sports Illustrated as part of his research into the book Gorgeous George: The Outrageous Bad-Boy Wrestler Who Created American Pop Culture:

During the match George would kidney-punch and eye-gouge, then hide behind the ref. Incensed, the audience, playing the same role as outraged NFL fans do today, rained jeers down on him. “You’re ignorant peasants,” George informed them. “Beneath contempt.”

Between rounds he sipped tea from a silver service, his manicured pinkie finger raised in elegant defiance of convention. 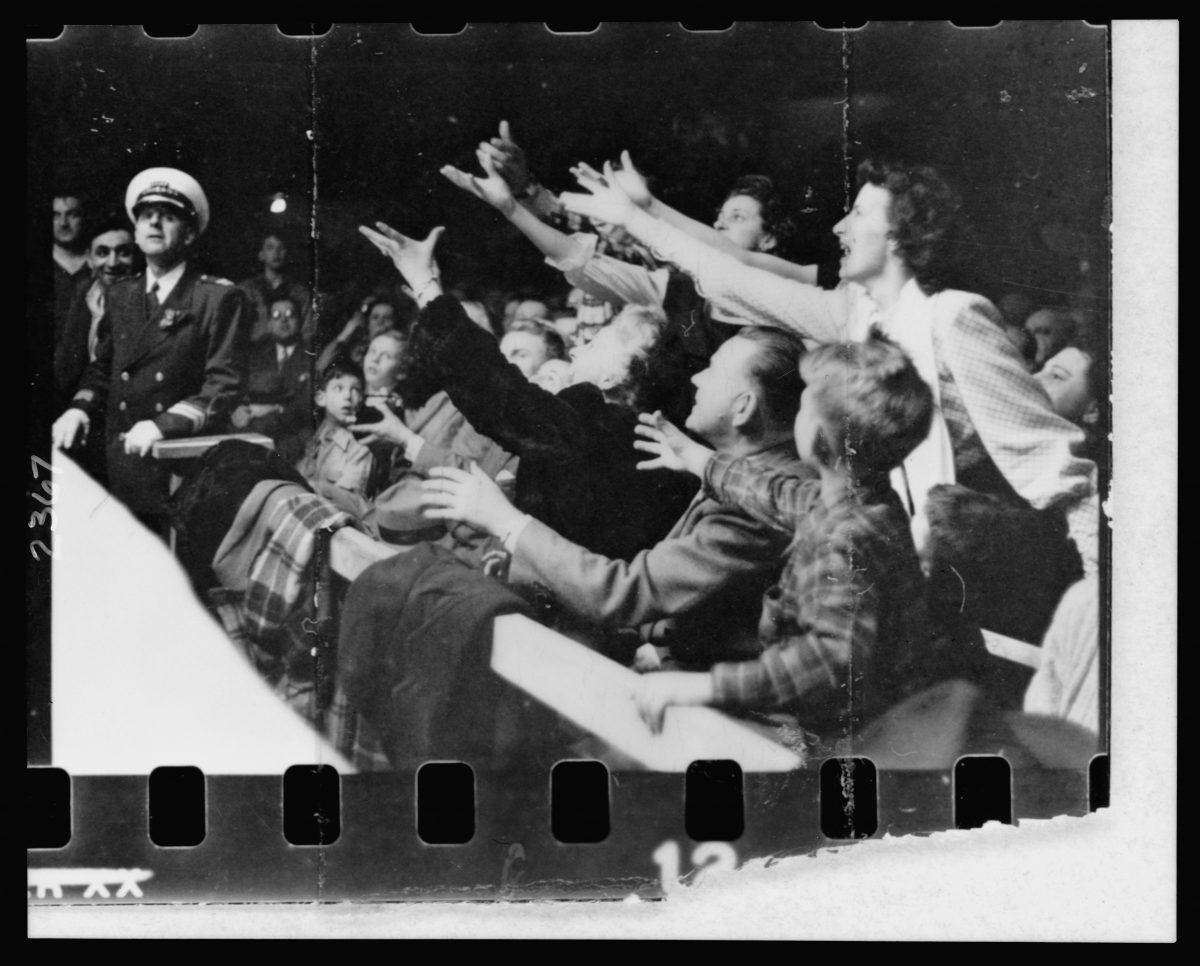 Gorgeous George riles the crowd at the Chicago Ampitheater in 1949.

Gorgeous George was terrific box office. In the late 1940s and 1950s, wrestling was on the TV. The money poured in. By 1950 Gorgeous was raking in $100,000 a year, as much as the great Joe DiMaggio earned playing baseball for the Yankees. Other showman took note:

The Godfather of Soul, James Brown, says in his 2005 memoir, I Feel Good, that he used parts of the Orchid act to “create the James Brown you see on stage.” In Chronicles: Volume One, Bob Dylan also says he was inspired “for years to come” by a G.G. encounter in Hibbing, Minn.

Dylan was Bobby Zimmerman performing on a makeshift stage when Gorgeous George “roared in like the storm” for a match, his blond curls flowing, his “eyes flashing with moonshine”. Gorgeous George caught the musician’s eye and appeared to mouth the phrase, “You’re making it come alive.” That message, Mr. Dylan writes, “was all the recognition and encouragement I would need for years to come.” 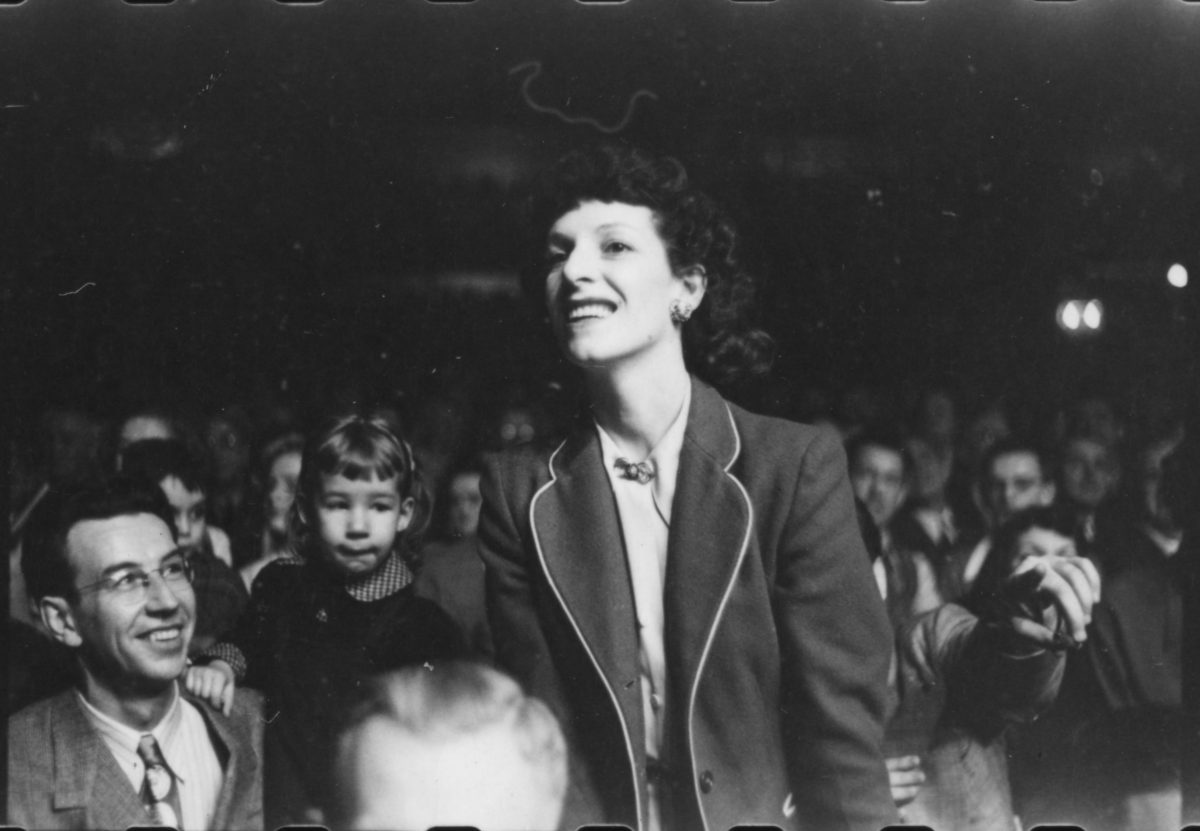 Craning and standing to see more of Gorgeous George at the Ampitheter, Chicago – 1949

But George made his greatest disciple in 1961, passing the torch to a young boxer named Cassius Clay.

Clay was already the Louisville Lip. But when he and George met at a Las Vegas radio station, the wrestler’s gale-force trash talking blew the boxer’s ears back. If he lost to Classy Freddie Blassie, George ranted, “I’ll crawl across the ring and cut my hair off! But that’s not gonna happen because I’m the greatest wrestler in the world!” At the match, Ali remembered later, “I saw 15,000 people comin’ to see this man get beat. And his talking did it. I said, ‘This is a gooood idea!'” In the locker room afterward the 46-year-old wrestler told the 19-year-old, “A lot of people will pay to see someone shut your mouth. So keep on bragging, keep on sassing and always be outrageous.”

In 1949, Stanley Kubrick took these pictures of Gorgeous George at a bout in Chicago. Before Kubrick became a feted director, he worked for Look magazine as photographer. The fight saw Gorgeous George take on Ralph Garibaldi at The Ampitheater on on January 14. Maybe you or someone you recognise was there..? 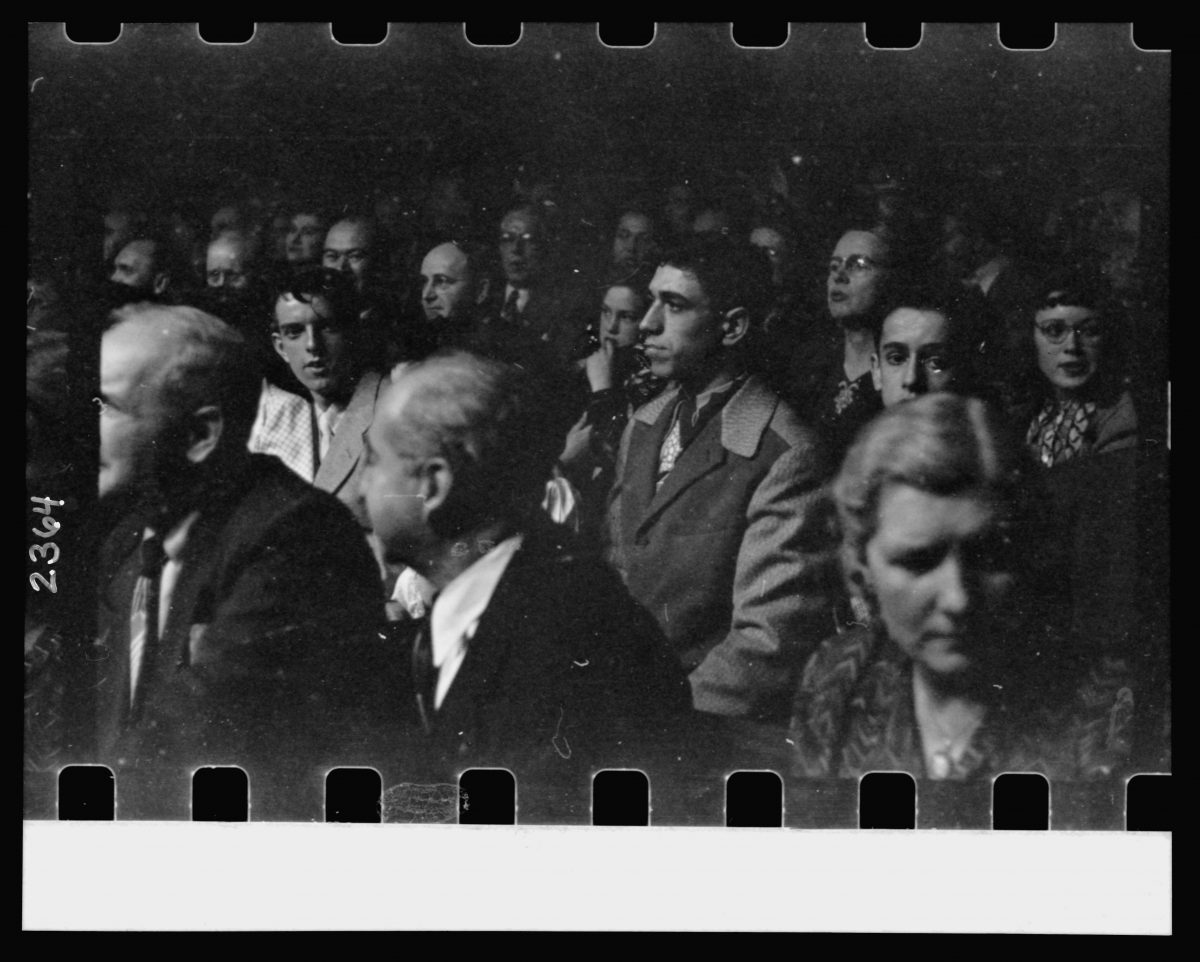 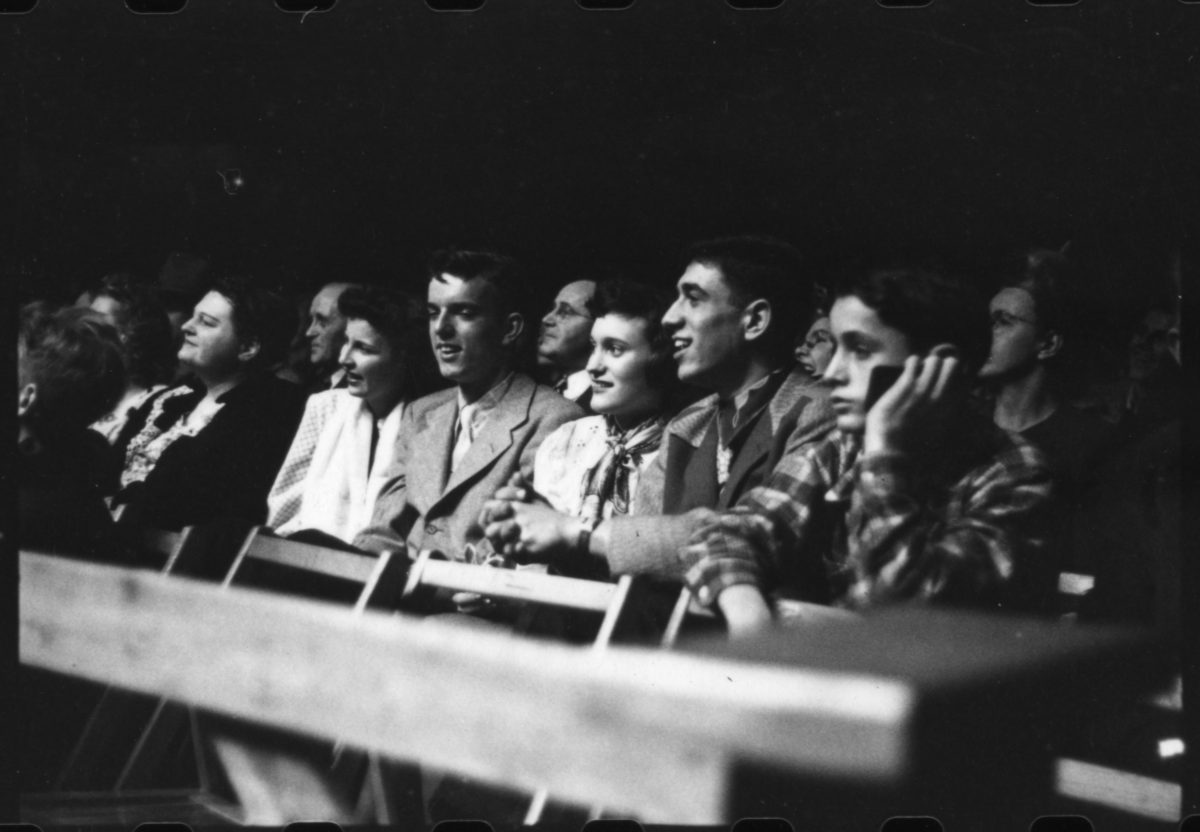 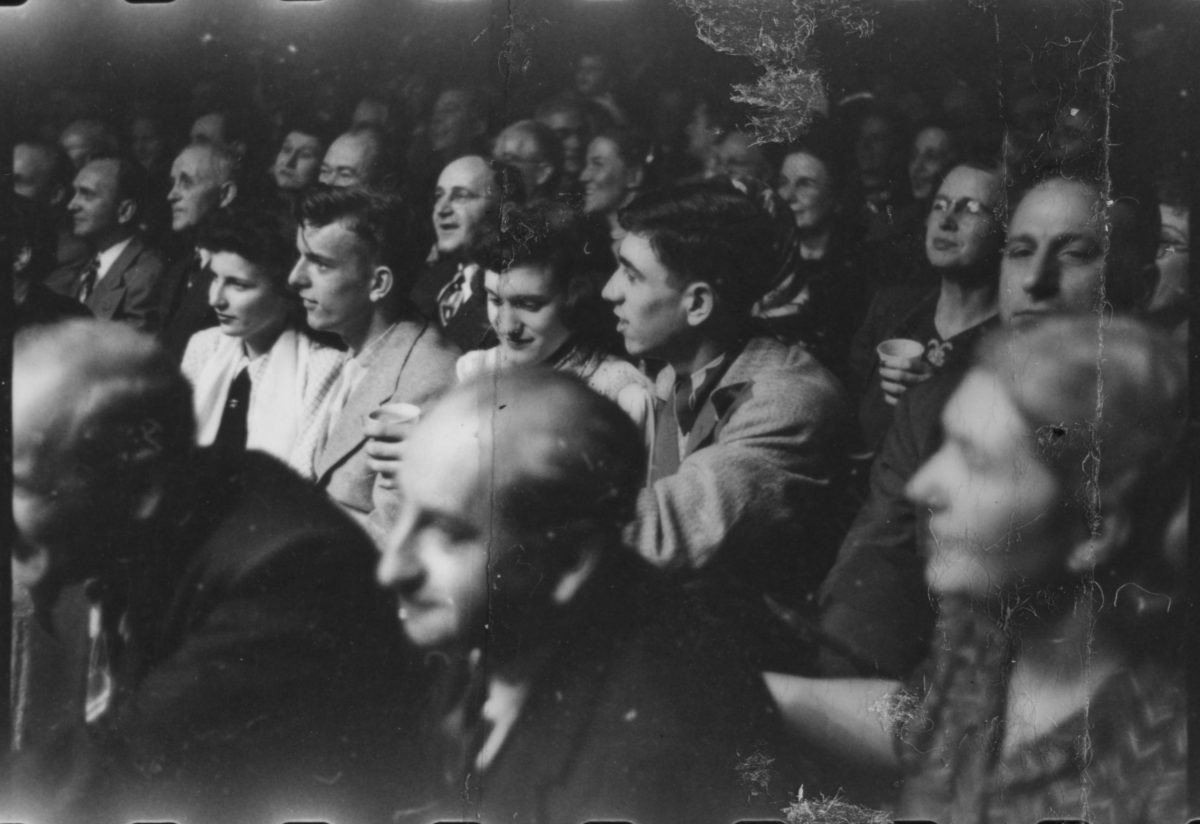 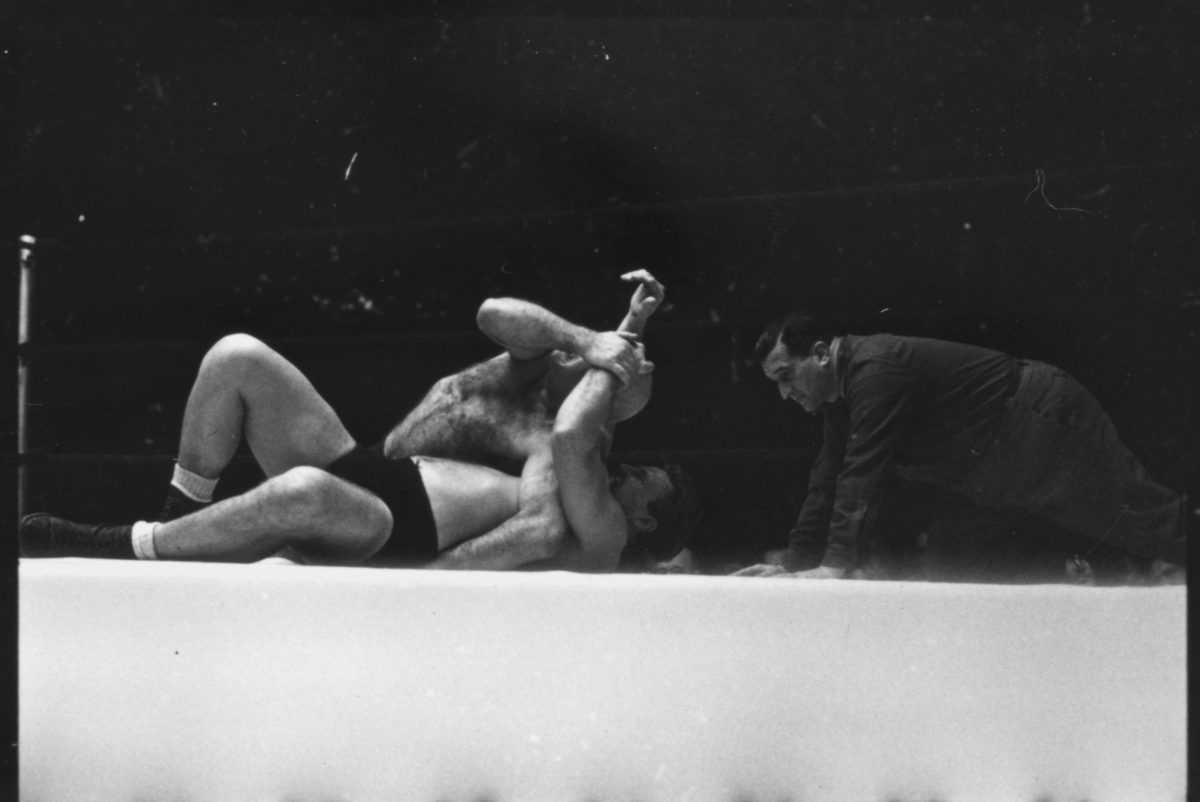 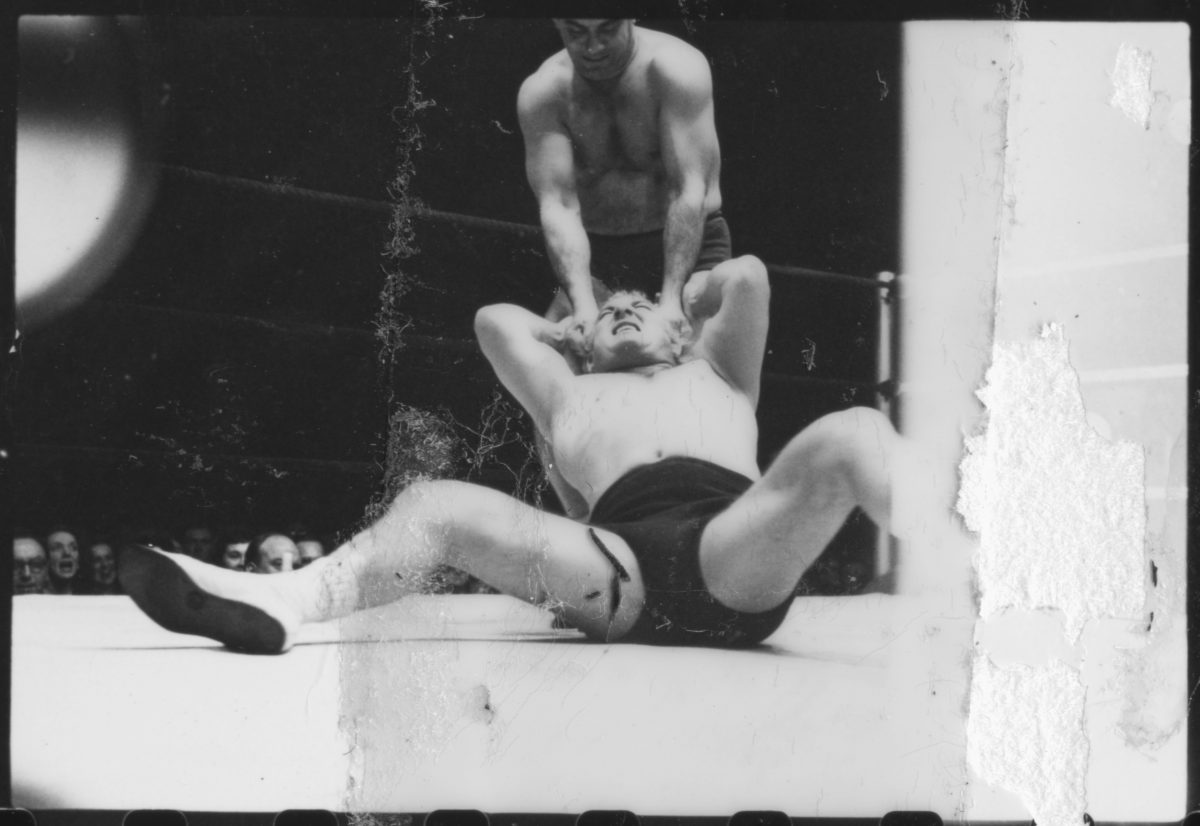 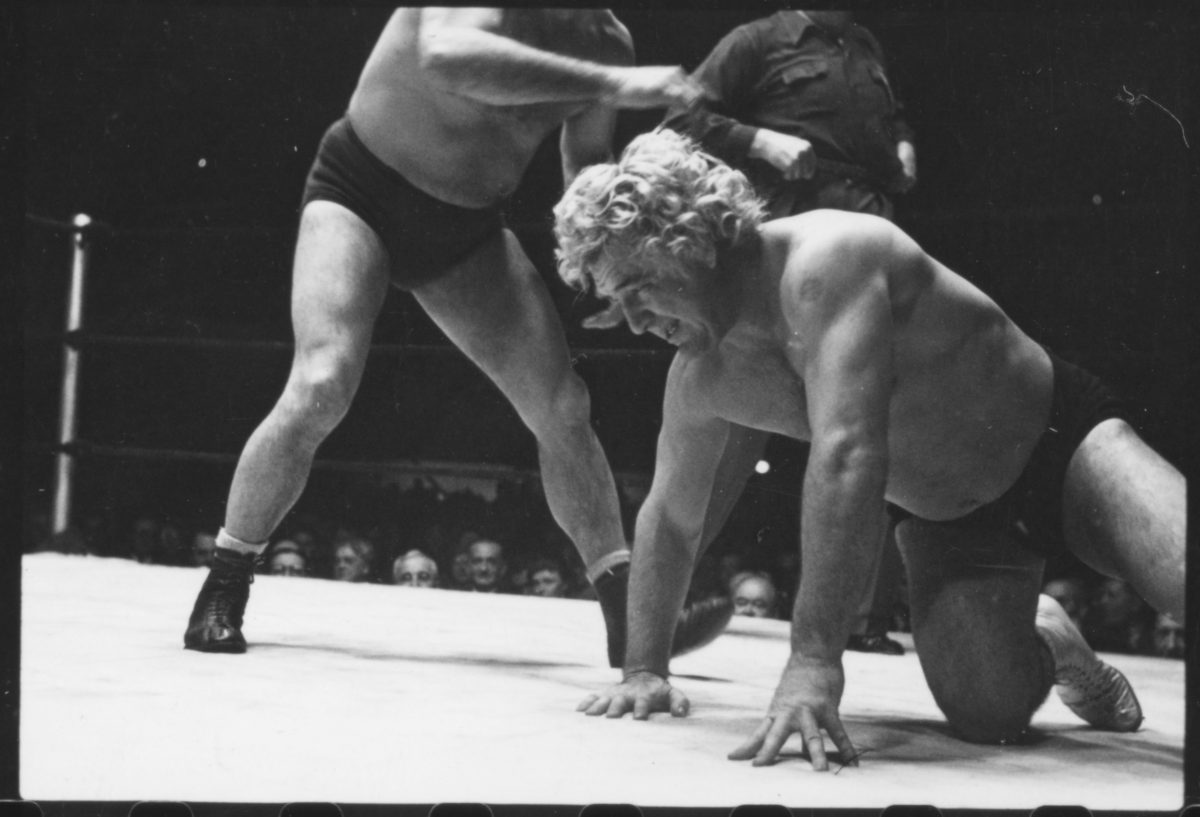 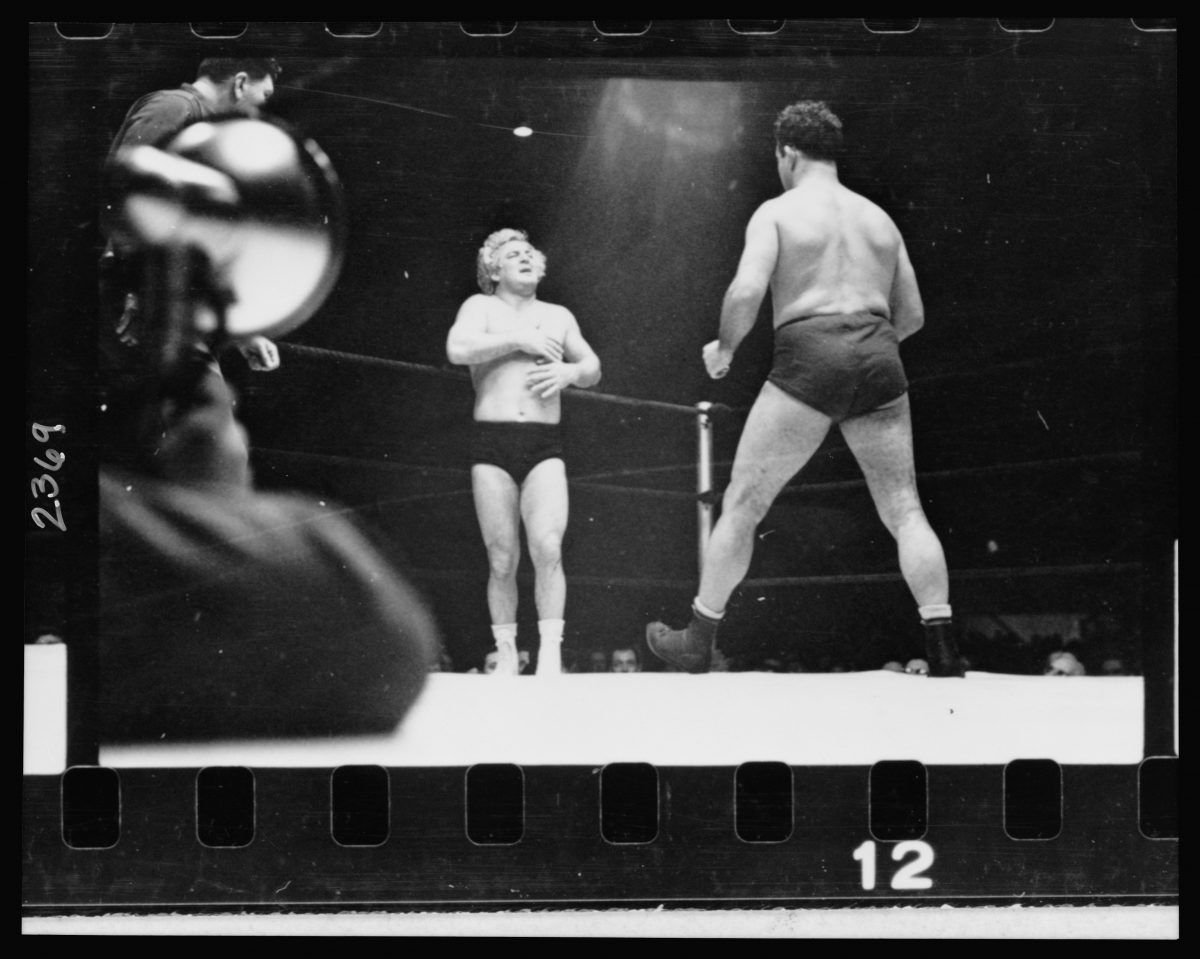 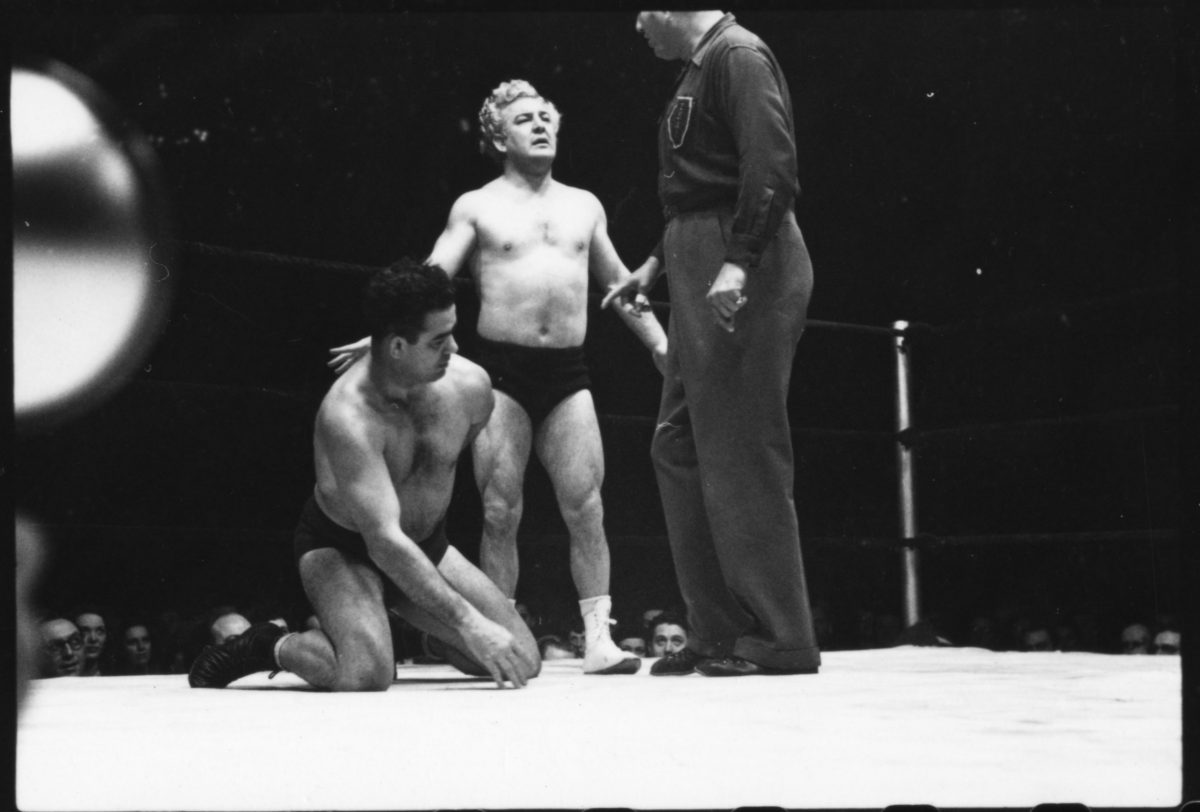 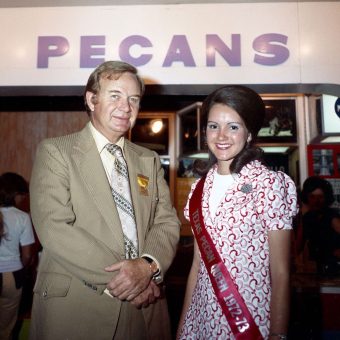 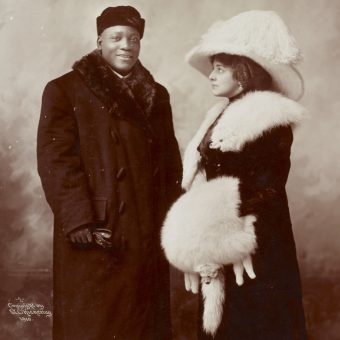 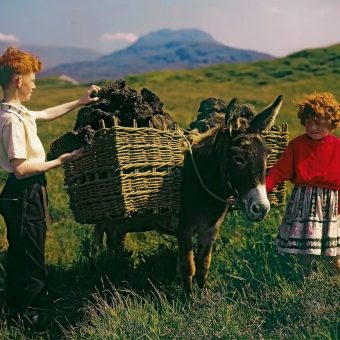