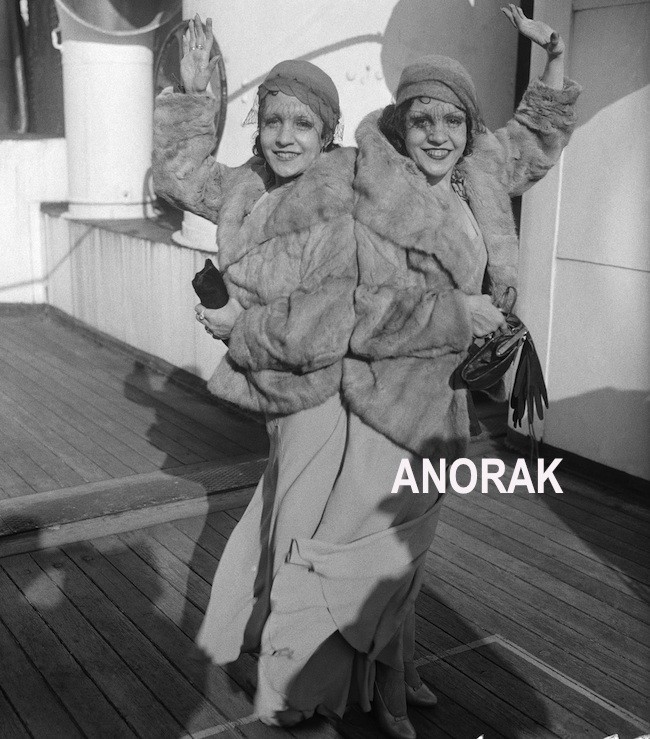 FLASHBACK Photo of The Day: October 6 1933 – Violet and Daisy Hilton, “Siamese Twins”, are pictured upon their arrival in New York aboard the Aquitania. Although they have been joined together since birth and cannot be separated, they say they are engaged and will figure in a double wedding within a year. Daisy claims to be engaged to Jack Lewis, an orchestra leader in Chicago and Violet reports that her fiancee is a prominent English boxer, but declined to reveal his name.

So reported the Associated Press.

The twins were born in Brighton to 21-year-old girl Kate Skinner in February 1908.  Twin daughters Daisy and Violet were joined back-to-back at their lower spine.

In his book The Lives And Loves Of Daisy And Violet Hilton: A True Story of Conjoined Twins, Dean Jensen introduces Mary Hilton, a midwife in Brighton and landlady of the Queen’s Arms pub. She adopted the twins and set about making money from them.

The twins are quoted:

“Our earliest and only recollections are the penetrating smell of brown ale, cigars and pipes and the movements of the visitors’ hands which were forever lifting our baby clothes to see just how we were attached to each other.”

Hilton then toured them in circus “freak” shows up and down the country, beating them if they went against her.

In 1915, Hilton’s daughter Edith married an Australian balloon salesman named Myer Myers. He would manage them. He relocated the act to the USA. They danced the can-can and played clarinet and piano. They were not allowed to mix with any other people, their mystique assured by their remoteness.

In 1919, Mary Hilton died. Myer Myers, so bad they named him twice, reportedly told them:

“Your own mother rejected you because you were so hideous and terrifying. “You should kneel in prayer every night, thanking God that Edith and I care enough to save you from being thrown into an asylum for monster children.”

Seeking friendship outside the abusive Myers home, the twins befriended their advance agent, William “Bill” Oliver. Although the twins claim in their autobiography that their relationship with Oliver was strictly platonic, biographer Dean Jensen believes the twins were two of many mistresses of the smooth-talking promoter and that he slept with both of them many times. In any case, Oliver’s wife Mildred accused him of “spending too much time” with them and filed for divorce, and attempted to sue the twins for $250,000. On the orders of Mrs. Myers, Daisy and Violet asked for the help of a San Antonio lawyer, Martin J. Arnold. Arnold inquired as to why the sisters, who were over 21 years old and legal adults, remained bound to Mr. and Mrs. Myers, and he was shocked to learn of their situation. He took on the twins’ case in January of 1931, helping them file suit against the Myers to break their contract and legally separate from their abusive guardians. Judge W.W. McCrory decided the case in April, awarding the equivalent of nearly $80,000 to the sisters and allowing the Myers to keep their San Antonio home.

The twins set up home in a New York apartment. If men did come calling, as Violet said:

“Why, I just turn over and read a book and eat an apple.”

In 1934, Violet was engaged to bandleader Maurice Lambert. The marriage was not to be – 21 states refused to give them licence to marry and Lambert lost heart. The law said that Daisy should also be engaged. She quickly pulled Jack Lewis, another bandleader, but that too would not last.

Their new agent, Terry Turner, strove to keep the twin profitable. He suggested one of the twins should get married at Dallas’s 70,000-seat Cotton Bowl stadium. Her groom was a homosexual dancer named Jim Moore. The marriage was a sham, something Violet admitted to. Their stock plummeted. Soon they were selling hot-dogs, staking shelves and, reprotedly, appearing as “Daisy and Violet Hilton – The World’s Only Strip-Teasing Siamese Twins”.

You can see the twins the tabloids loved in the 1932 movie Freaks and Chained for Life (above).