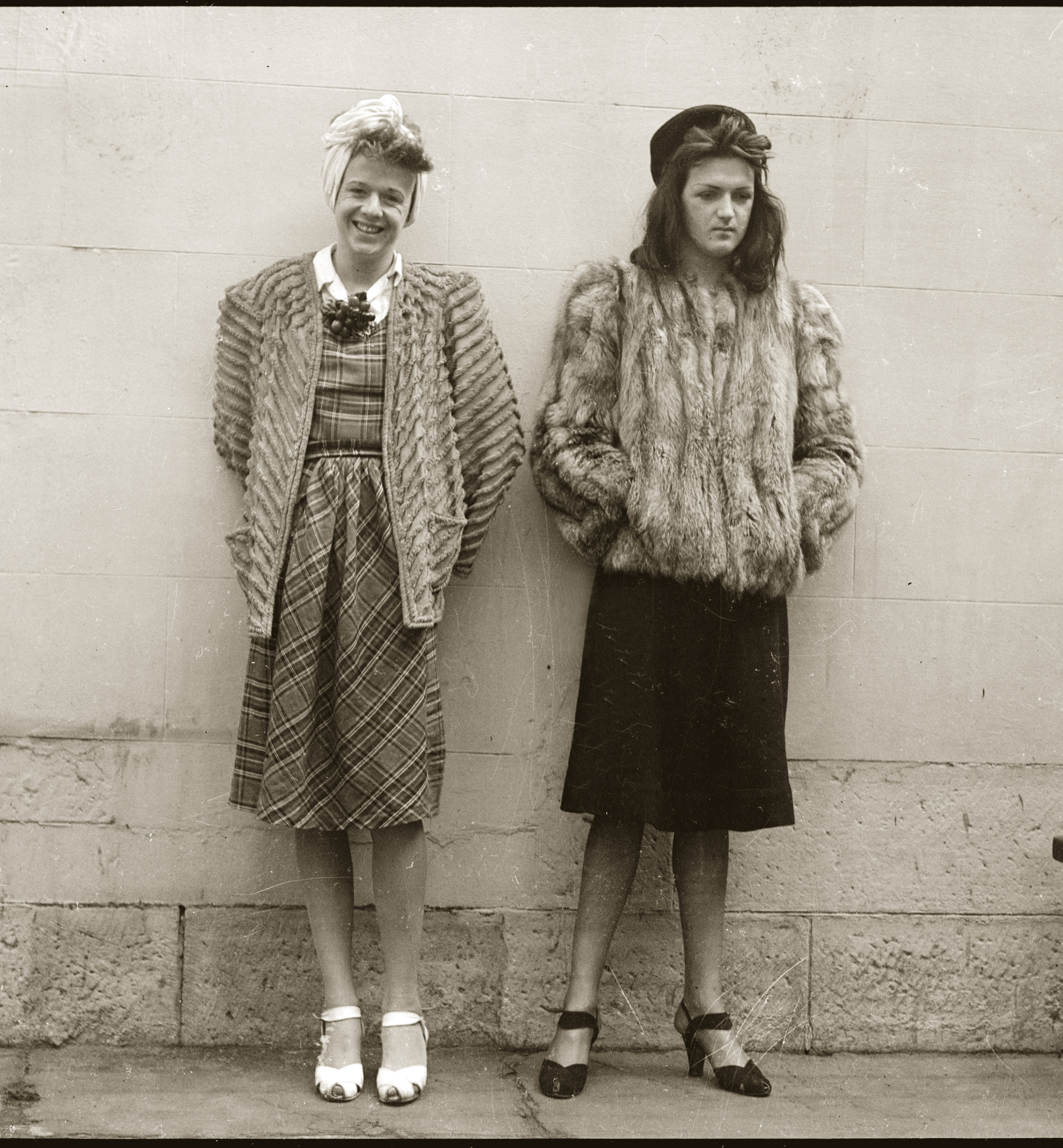 This is our second look at mugshots / prison portraits taken by New South Wales Police Department photographers in the 1920s. These pictures of female prisoners pictures were taken at the Central Police Station, Sydney, Australia. We do not know who took them. That’s a pity because they are extraordinary. Judged by the system and found wanting, the women appear dignified. Willing to be photographed, the women are participating completely in the moment, elevating the photographs from  mere voyeurism. 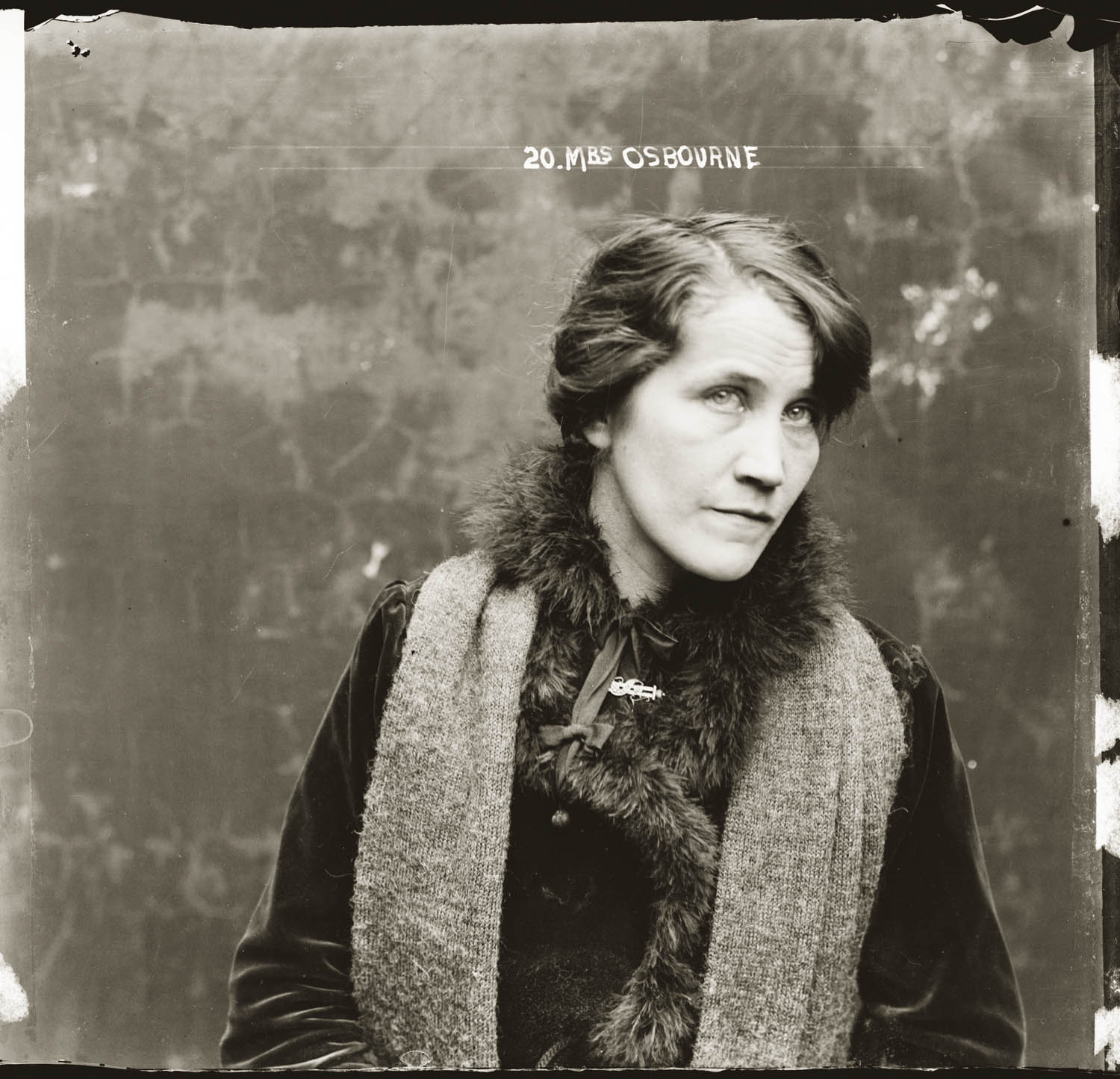 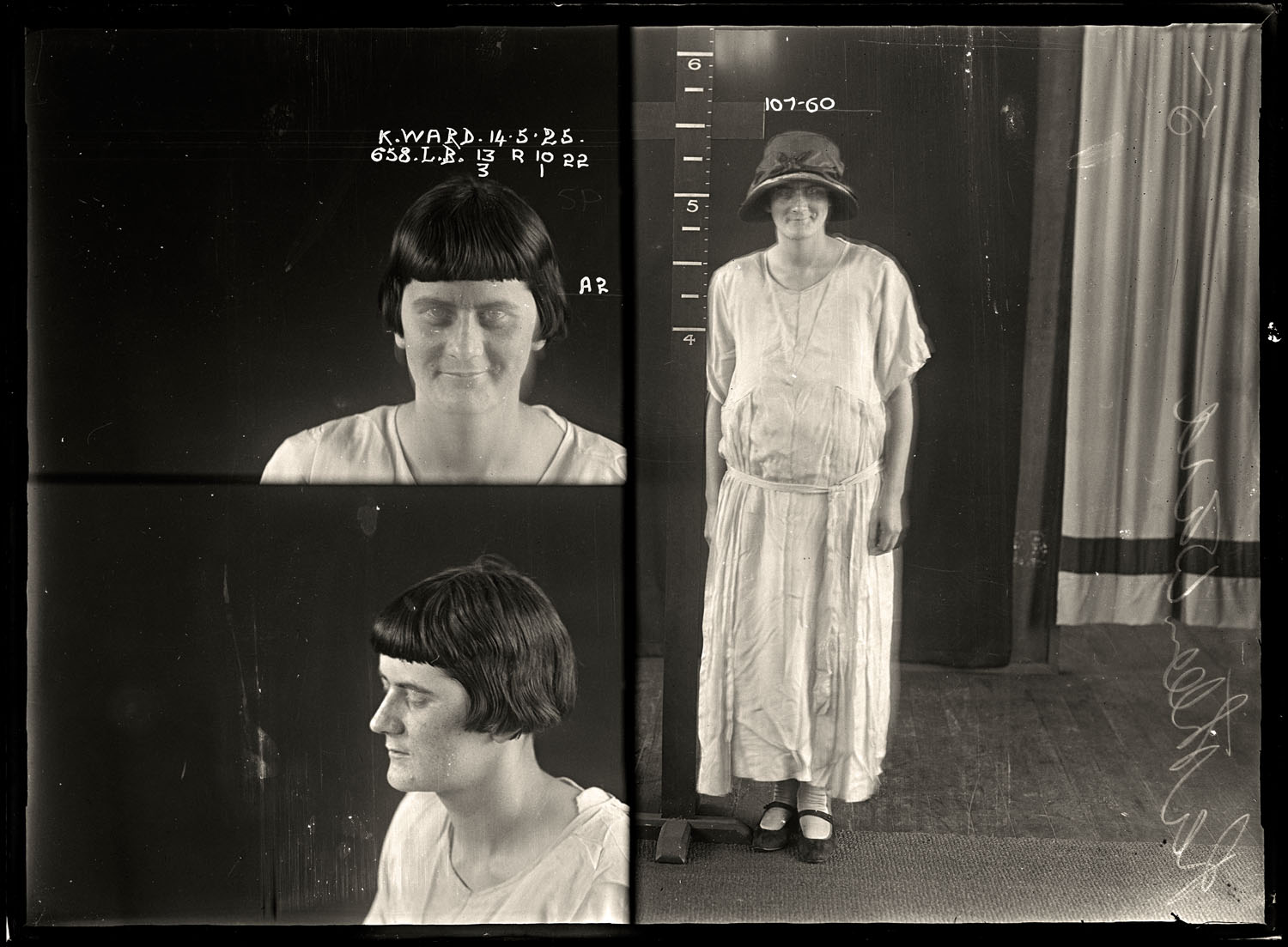 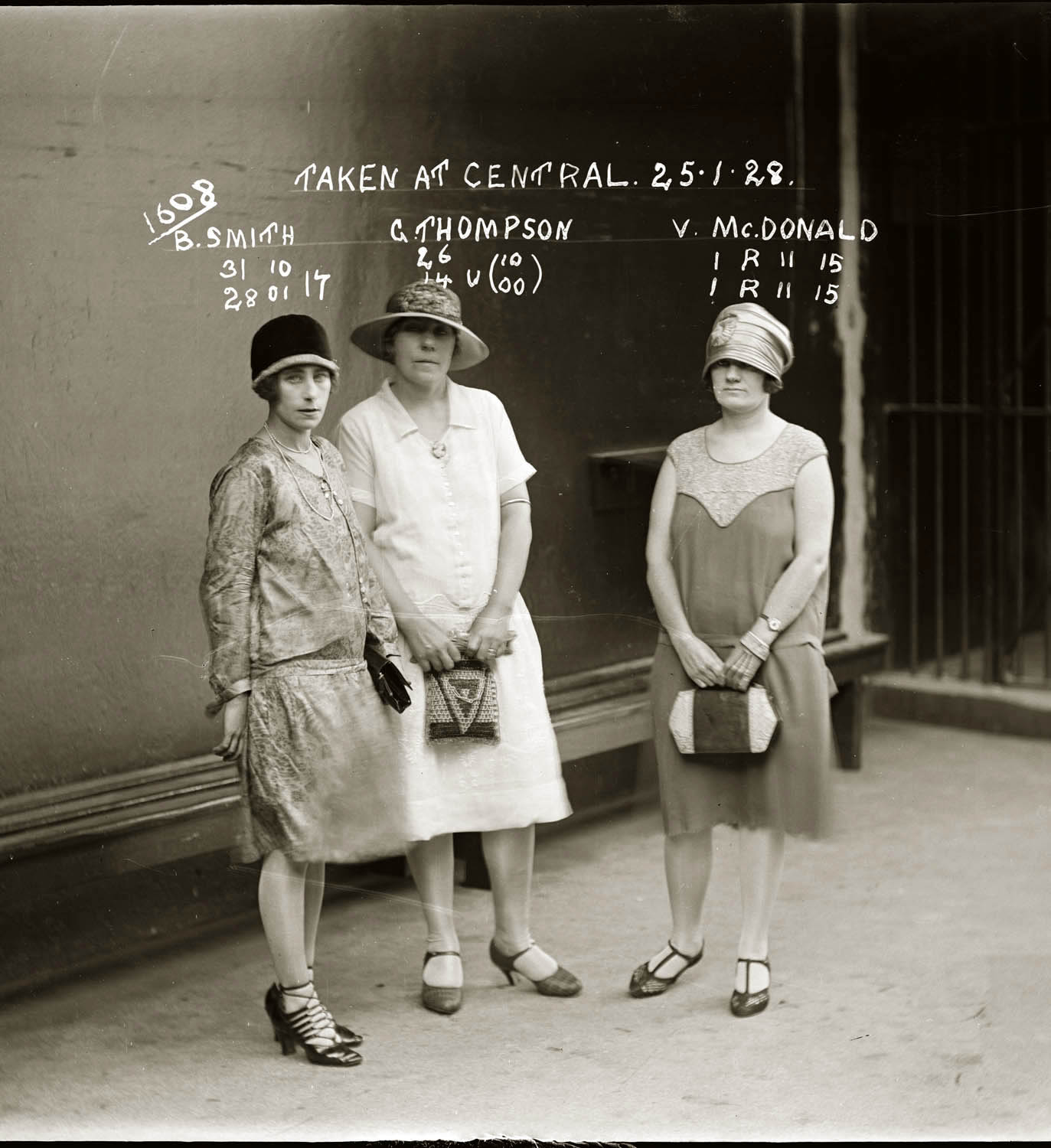 Mug shot of B. Smith, Gertrude Thompson and Vera McDonald- 25 January 1928.
This photograph was apparently taken in the aftermath of a raid led by CIB Chief Bill Mackay – later to be Commissioner of Police – on a house at 74 Riley Street, ‘lower Darlinghurst’. Numerous charges were heard against the 15 men and women arrested. Lessee Joe Bezzina was charged with ‘being the keeper of a house frequented by reputed thieves’, and some of the others were charged with assault, and with ‘being found in a house frequented by reputed thieves’. The prosecution cast the raid in heroic terms – the Chief of the CIB, desperately outnumbered, had struggled hand to hand in ‘a sweltering melee in one of the most notorious thieves’ kitchens in Sydney’. The defence, on the other hand, described ‘a quiet party, a few drinks, some singing … violently interrupted by a squad of hostile, brawling police’ (Truth, 29 January 1928). The gallery was packed with friends of the accused, who loudly jeered the prosecution and police witnesses. 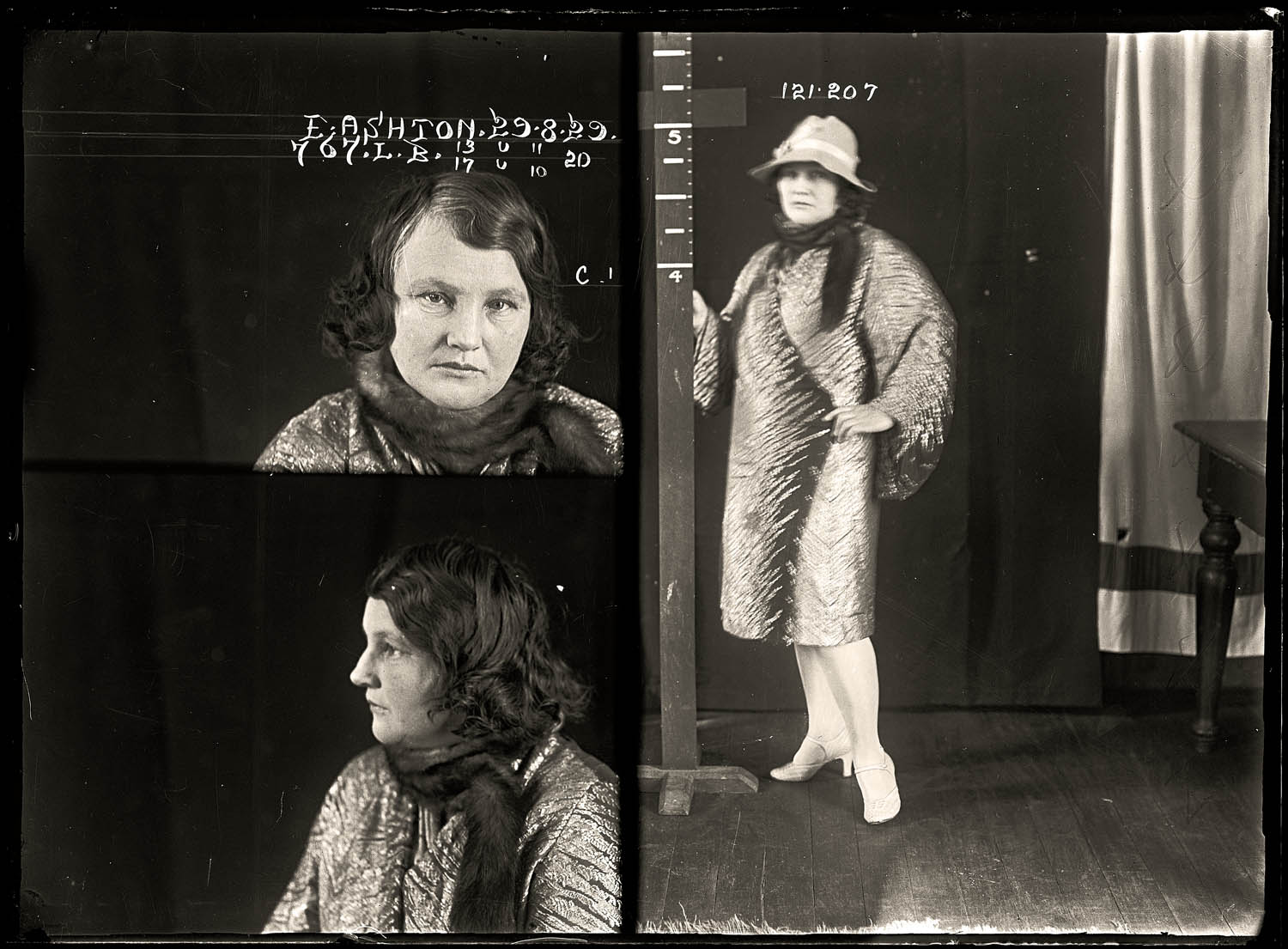 Dorothy Mort, 16 October 1929
“Mrs Dorothy Mort was having an affair with dashing young doctor Claude Tozer. On 21 December 1920 Tozer visited Mort’s home intending to break off the relationship. Mort shot him dead and then attempted to commit suicide. She was released from gaol shortly after this photograph was taken and disappeared from the public eye.” 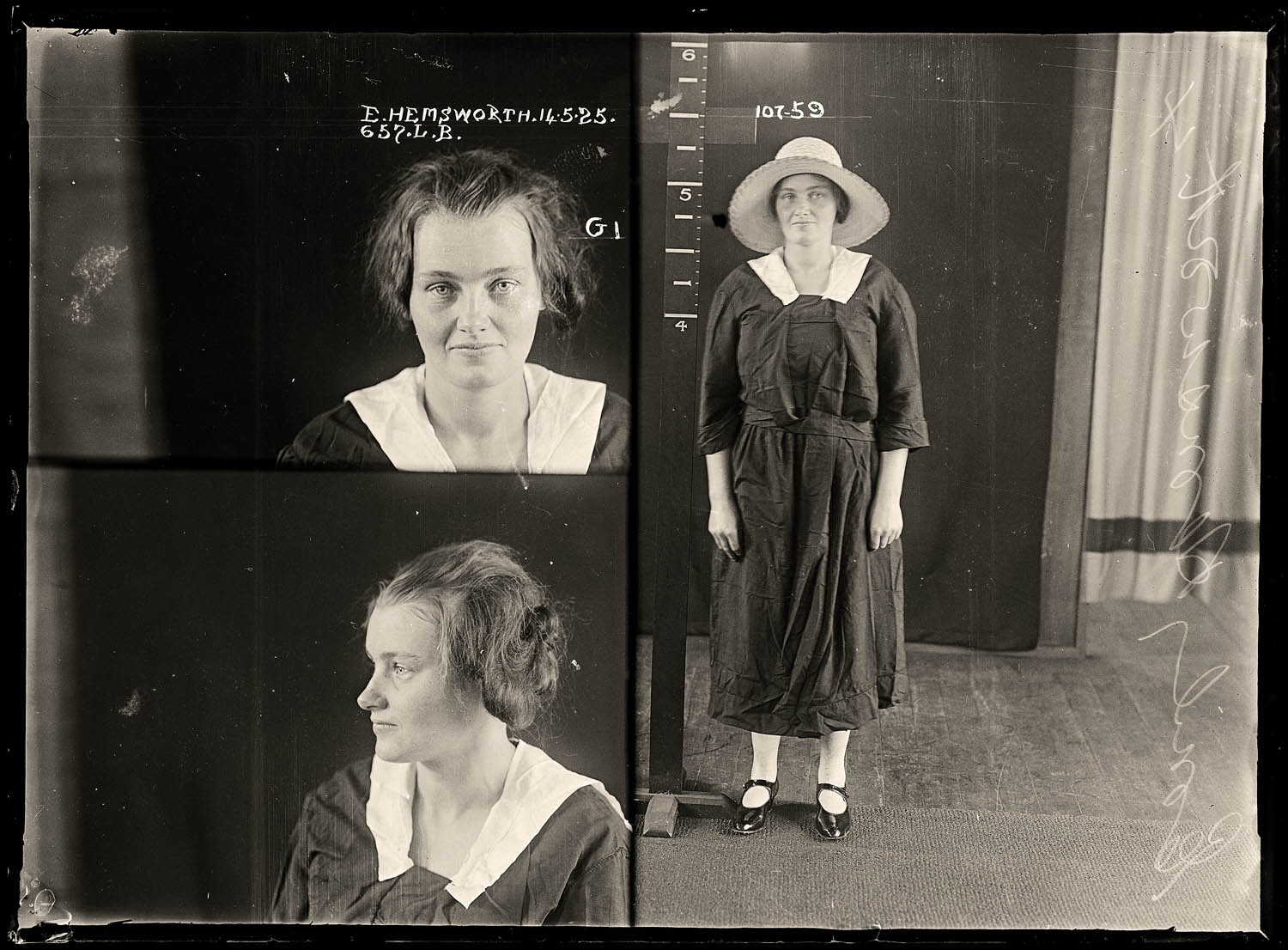 Emily Gertrude Hemsworth at 24 years old – 14 May 1925.
Emily Hemsworth killed her three-week-old son but could not remember any details of the murder. She was found not guilty due to insanity. Hemsworth was to be detained in custody until judged fit to return to society – it is unknown if she was ever released. 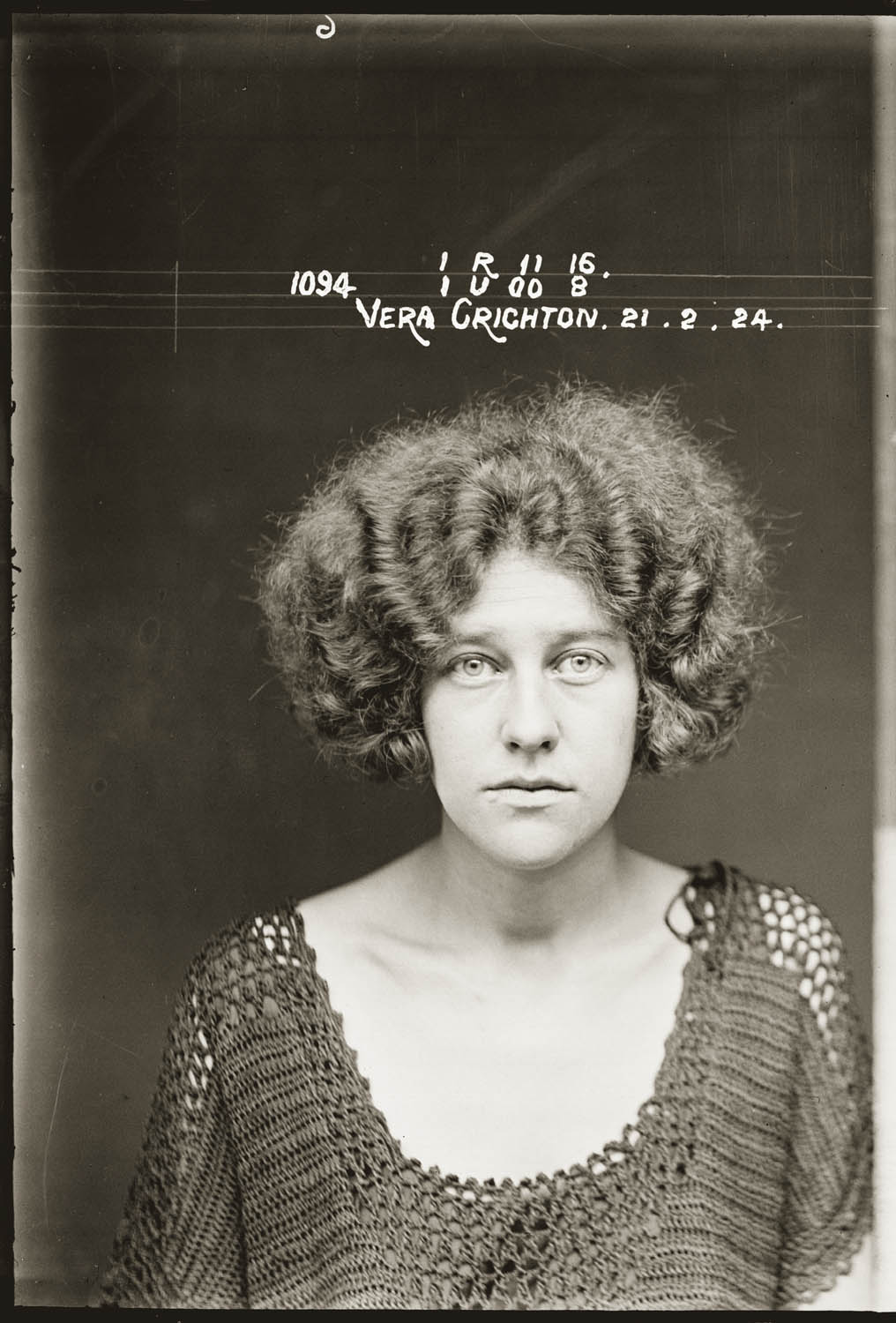 Vera Crichton, 21 February 1924
Charged with “conspiring together to procure a miscarriage”. Crichton was “bound over to appear for sentence if called upon within three years”. 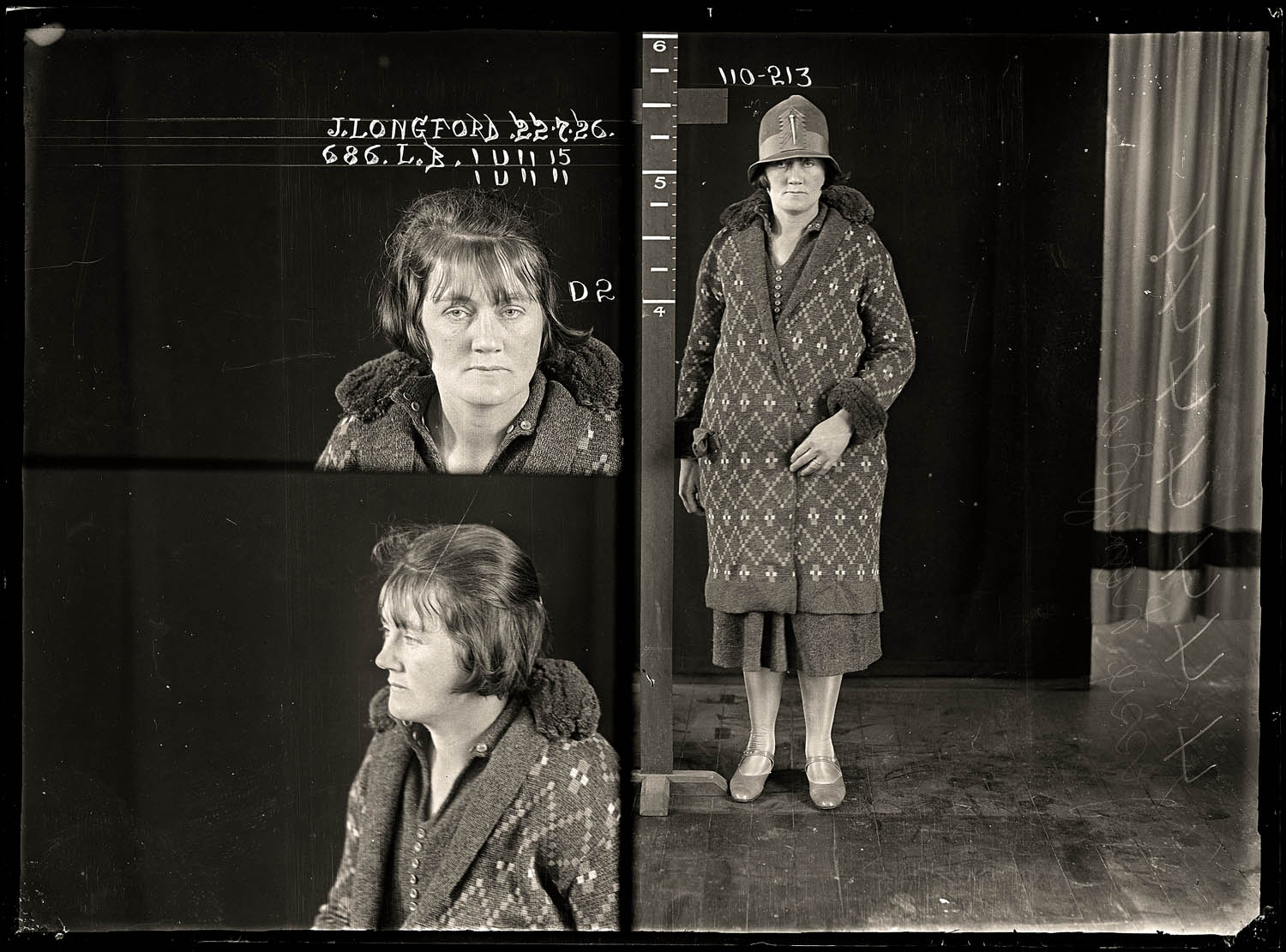 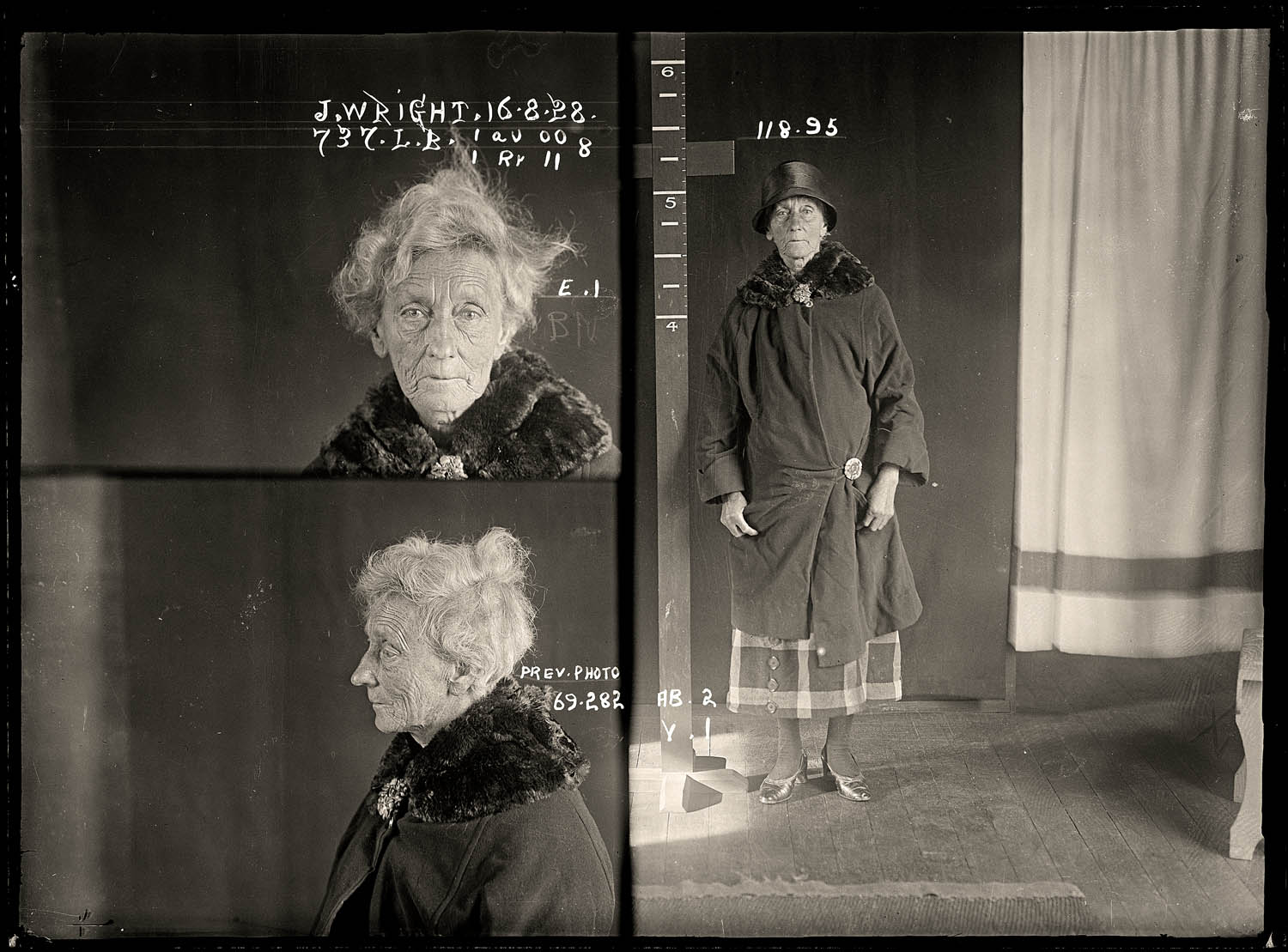 Janet Wright, 16 February 1922 –
“Convicted of using an instrument to procure a miscarriage. Janet Wright was a former nurse who performed illegal abortions from her house in Kippax Street, Surry Hills. Wright was prosecuted and sentenced to 12 months hard labour. Aged 68.” 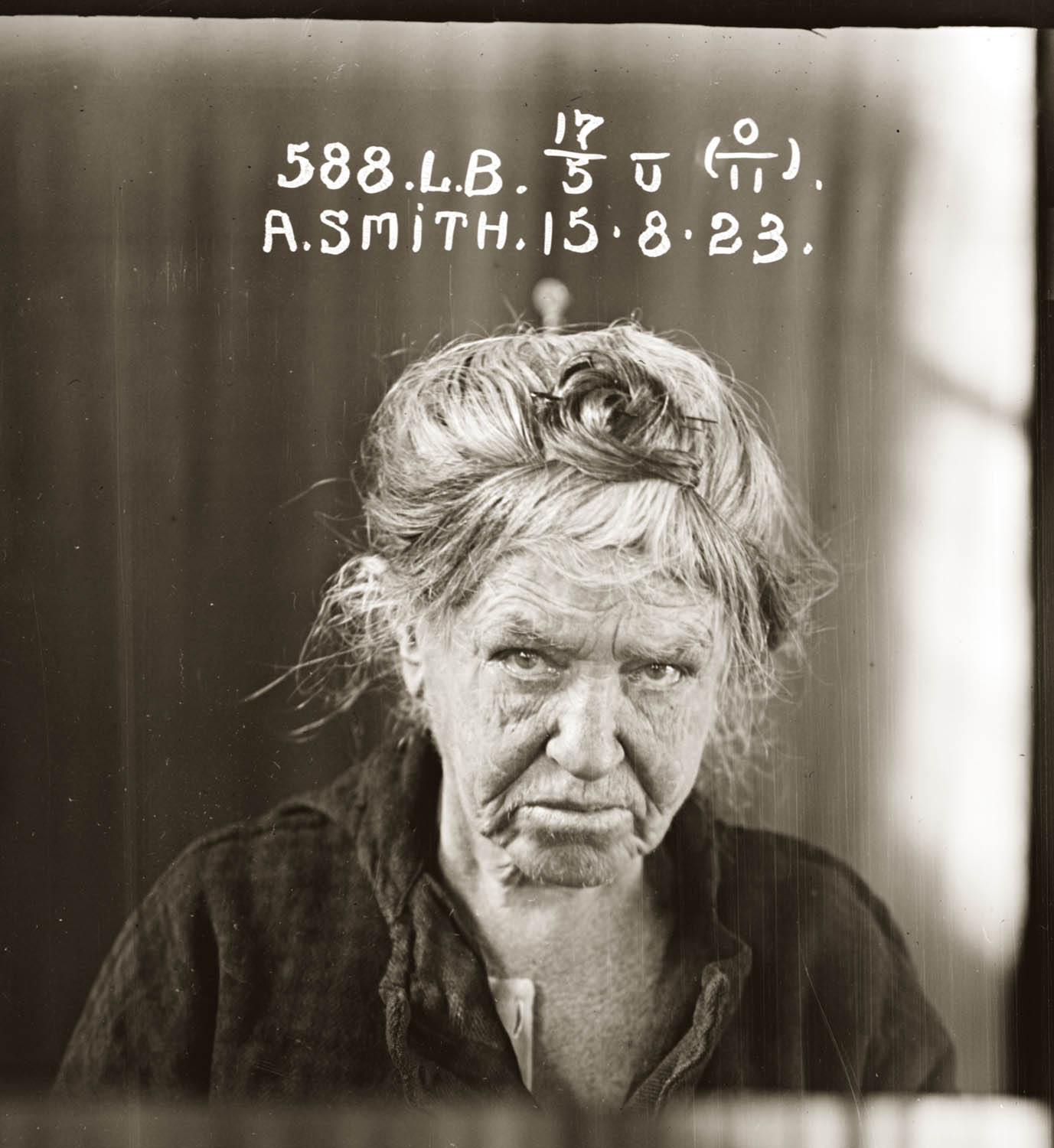 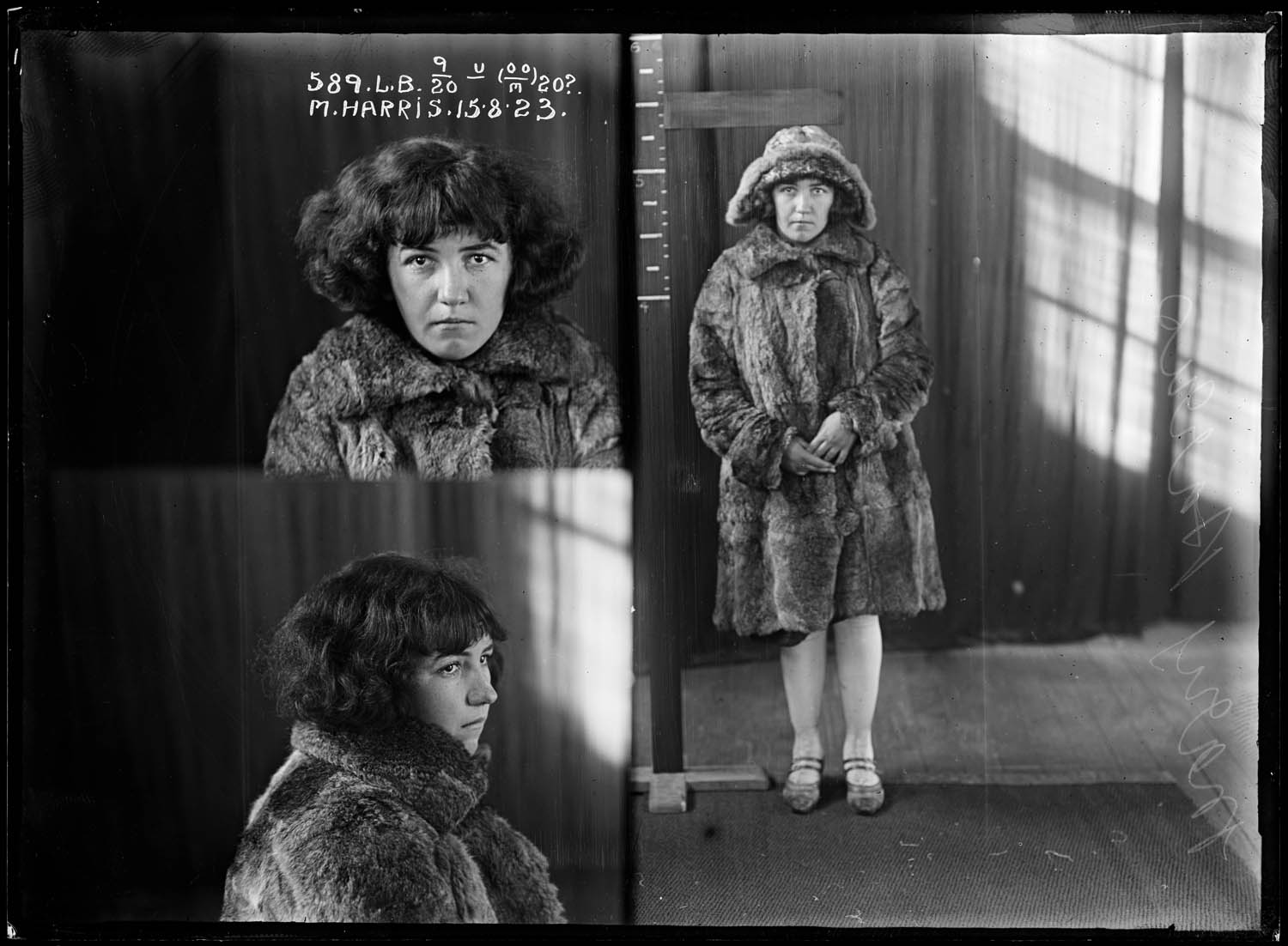 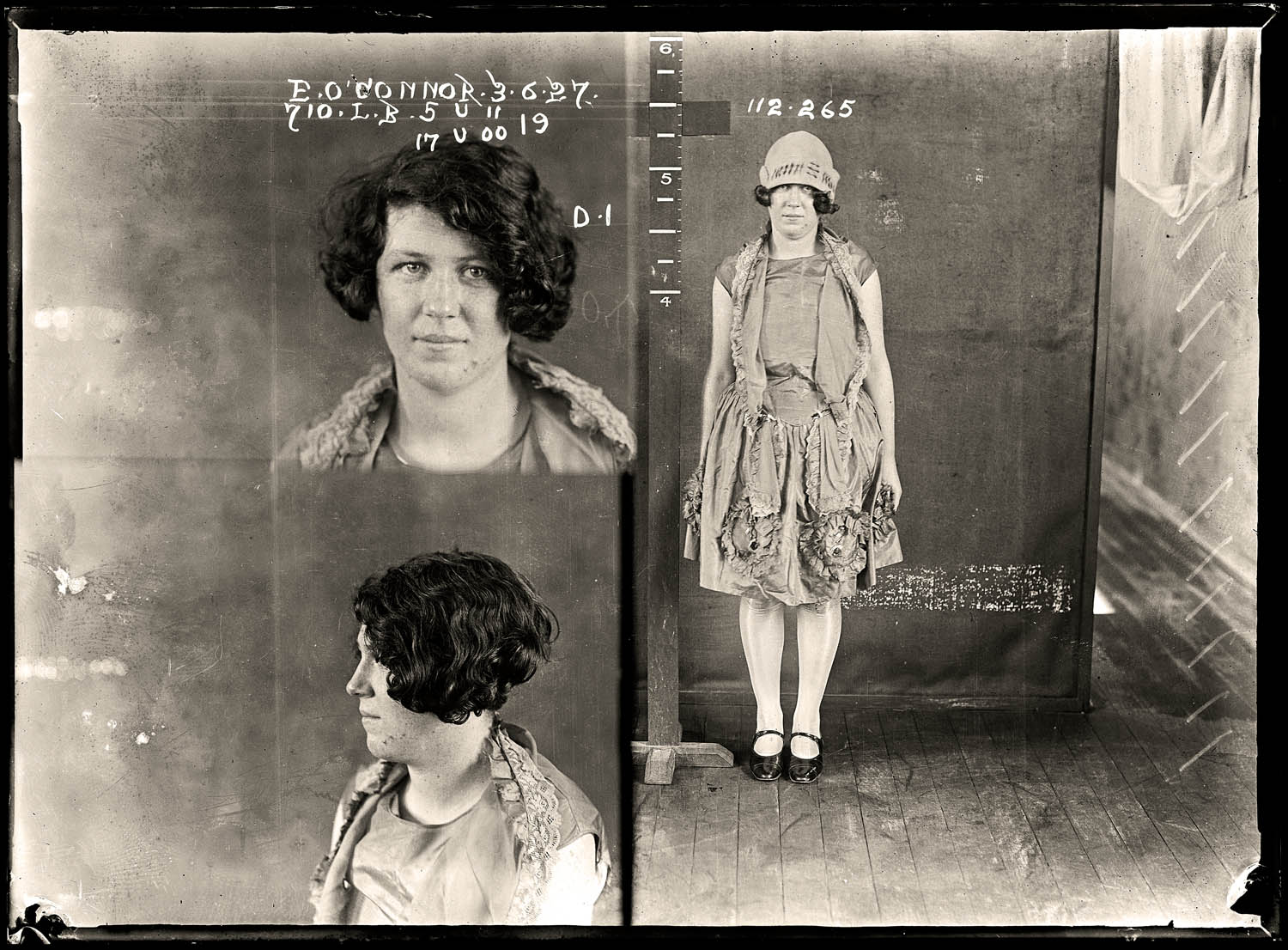 Eileen May O’Connor, criminal record number 710LB, 3 June 1927 –
|Convicted of stealing. Eileen O’Connor first appears in police records as a ‘missing friend’, or missing person. She is eventually arrested for stealing a wallet and is described by police with the odd epithet ‘inclined to be weak’. Aged 17. “ 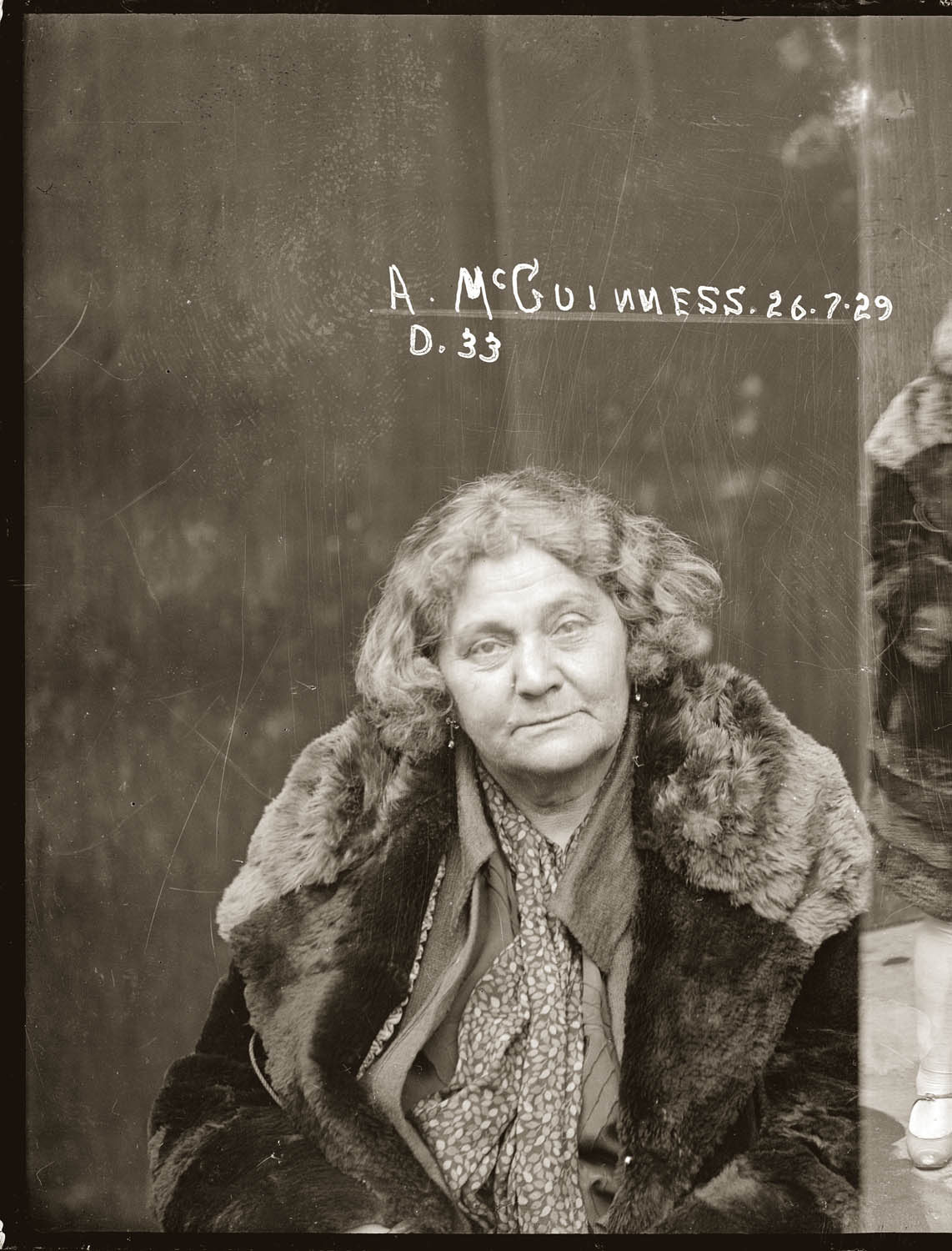 Ada McGuinness, 26 July 1929,
“McGuinness is listed in the NSW Police Gazette of 25 September 1929 as having been convicted of two charges of having cocaine illegally in her possession, for which she was sentenced to concurrent six and twelve months imprisonment with hard labour. Police and prosecution witnesses described McGuinness senior, who occupied a terrace house in Hargreave Street, as being one of the most active cocaine dealers in the Darlinghurst area at the time. A police witness described her as ‘the most evil woman in Sydney’. In 1925, as ‘Edith Cavanagh’ she had been sentenced to twelve months (suspended) for having in her possession forged bank notes. 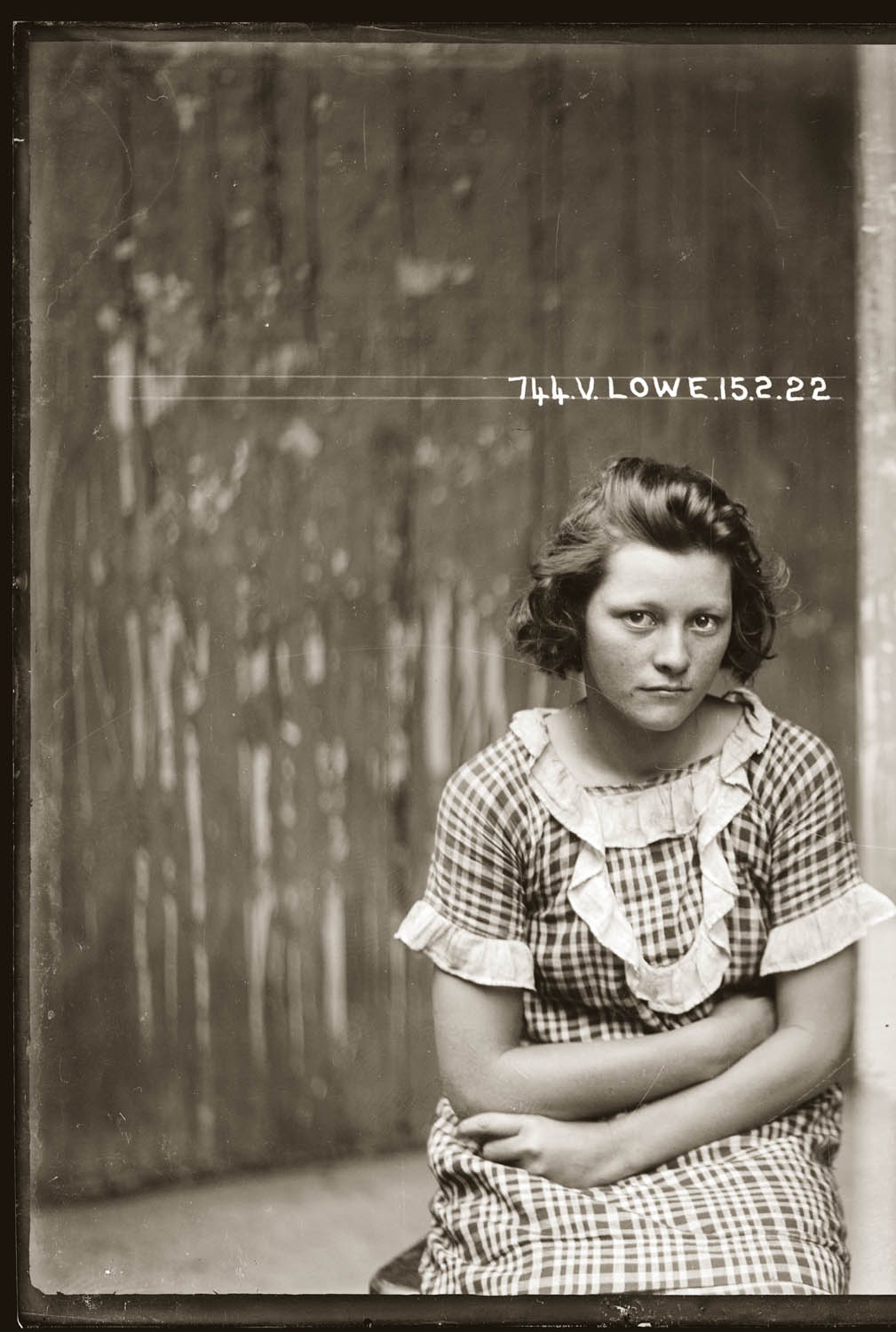 Valerie Lowe, 15 February 1922. Arrested for breaking into premises and stealing 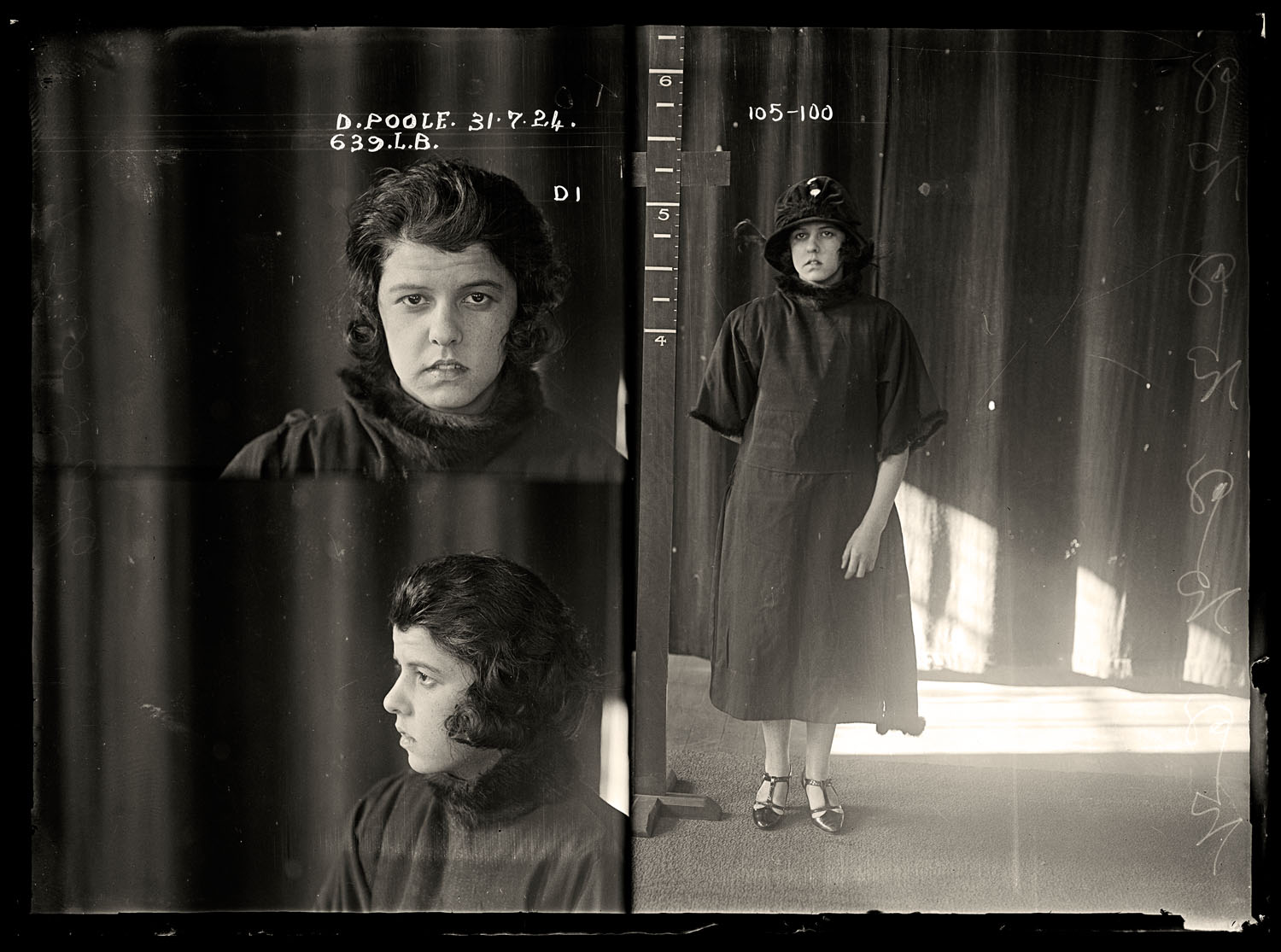 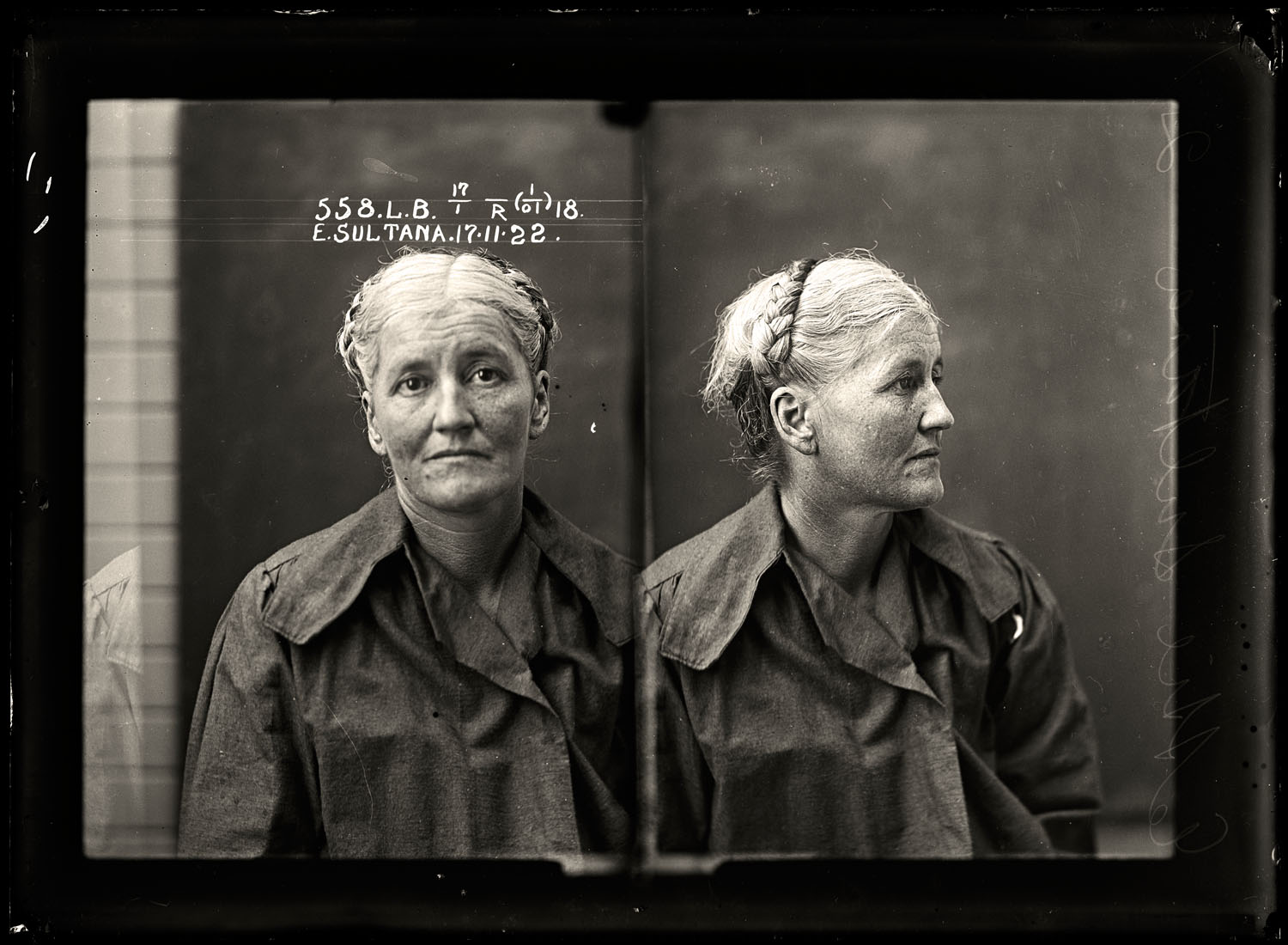 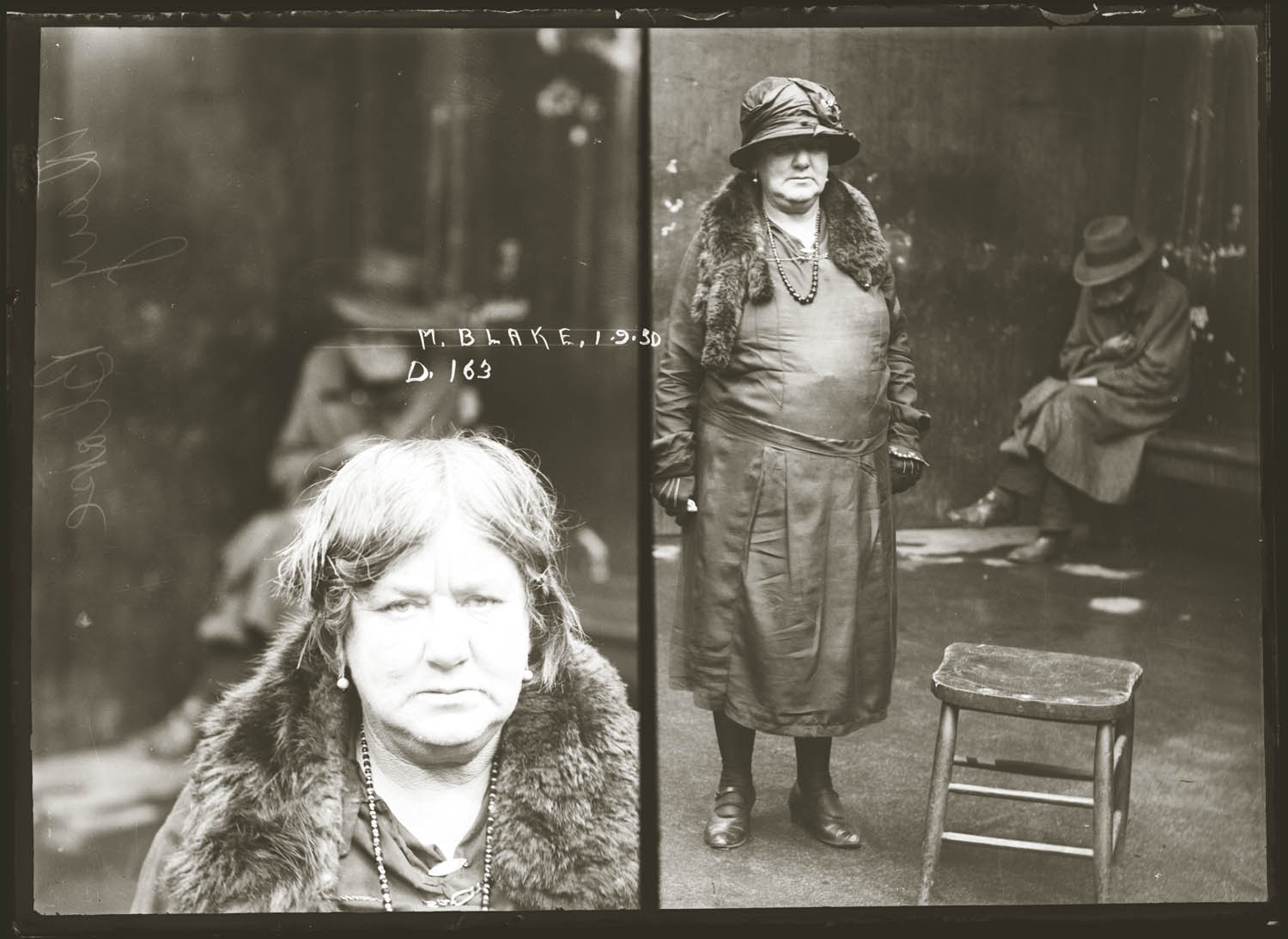 May Blake, 1 September 1930 –  ‘charged with having cocaine unlawfully in her possession.’ She was sentenced to 12 months imprisonment and fined 250 pounds.

Lead image: In June 1942, Neville McQuade (18) and Lewis Stanley Keith (19) were charged with being idle and disorderly, having “insufficient means of support, and with having goods in their possession – including a military uniform and an American dollar bill – believed to be stolen.” McQuade told a publication called Truth: “We were bundled out of the police cell, and snapped immediately. My friend and I had no chance to fix our hair or arrange our make-up. We were half asleep and my turban was on the wrong side.” The Sydney Living Museum nots: “McQuade told the paper of his ambition to be a professional female impersonator, and spoke of his admiration for his mentor, Lea Sonia, who had been killed not long before getting off a tram in the wartime ‘brownout’.”