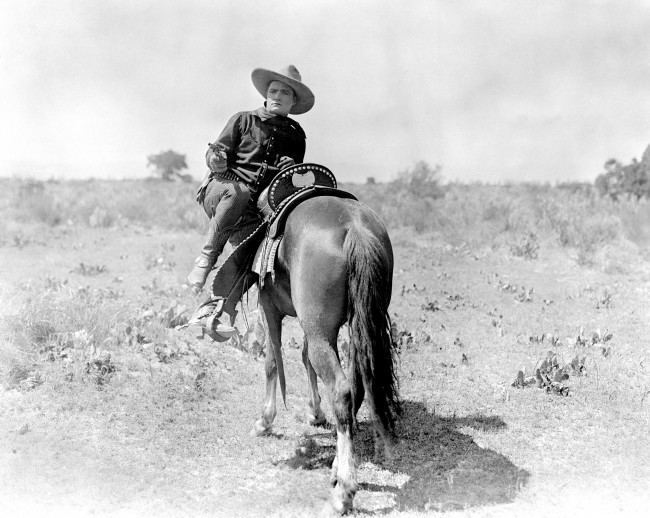 He did all his own stunts. 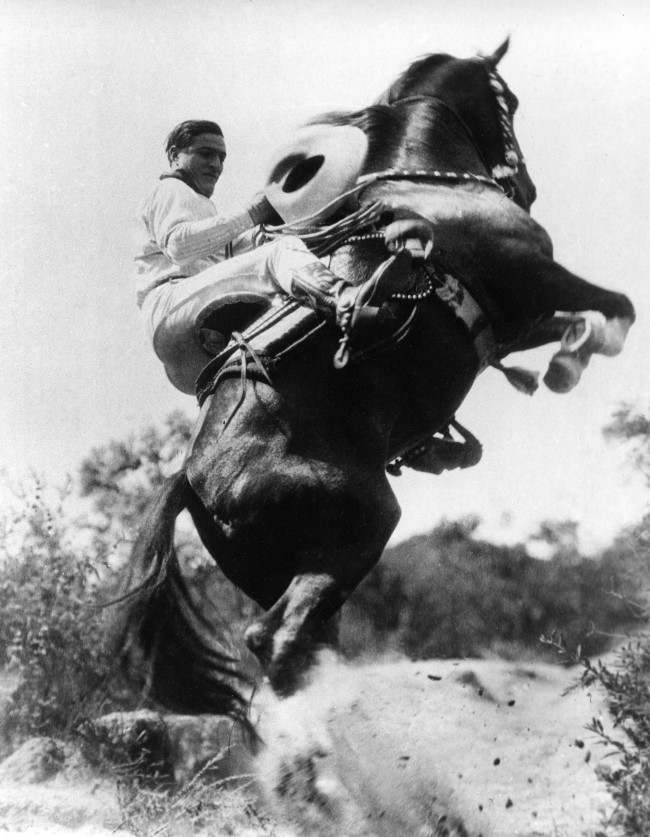 The Tom Mix Museum has lots of information on the actor.

Tom enlisted in the Army on April 26, 1898, giving his occupation as laborer and his birthplace as Driftwood, Pennsylvania, a small village about 5 miles from Mix Run. He gave his name as Thomas E. Mix and his height as 5’8″. Tom never liked the name Hezekiah and used Edwin, his father’s first name, as his middle name throughout his life. He enlisted for three years and was discharged on April 25, 1901. He reinlisted for another three years and in 1902 while on furlough from the Army married Grace Allin. He never returned to the Army and on November 6th, 1902 was listed as AWOL but was never court-martialed.

* His first marriage was annulled and a second marriage to Jewell “Kitty” Perrine of Oklahoma City also was short lived. In 1908 he married Oklahoma “cowgirl” Olive Stokes, and they toured the Wild West show circuit together. His daughter, Ruth, was born in 1912 at Olive’s family ranch near Dewey, Oklahoma. While Mix was staying with his in-laws, the mayor of Dewey, a family friend, appointed him “night marshal.” 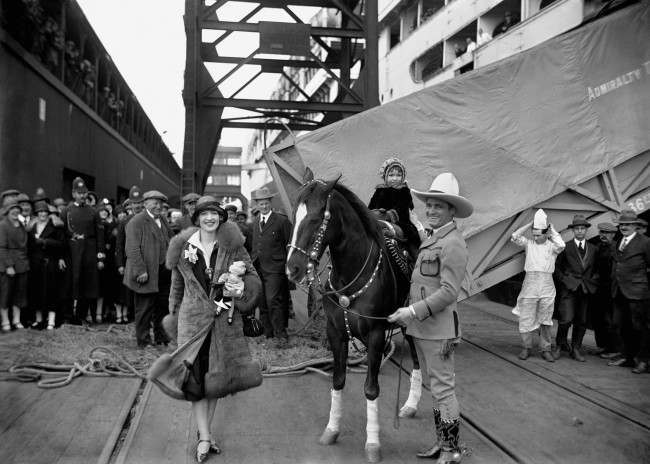 He wrote for Variety, Photoplay and Life magazines. In Photoplay he wrote a series of articles about “Making A Million”. This was a play on his first film The Cowboy Millionaire. 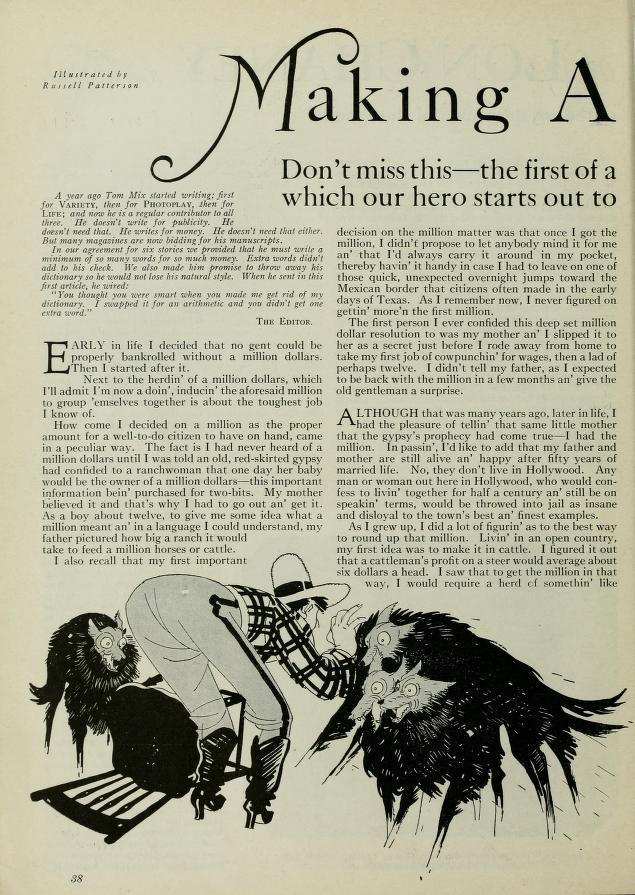 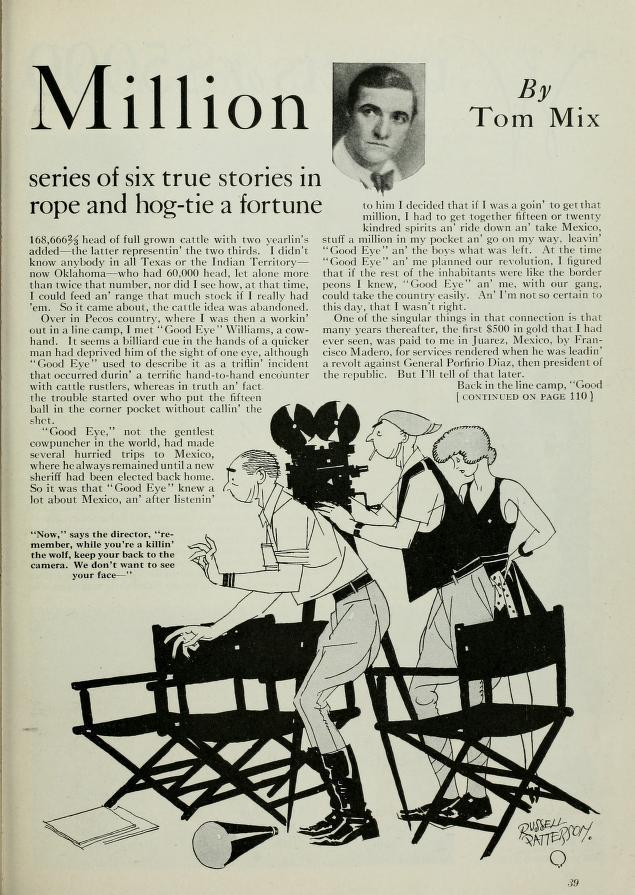 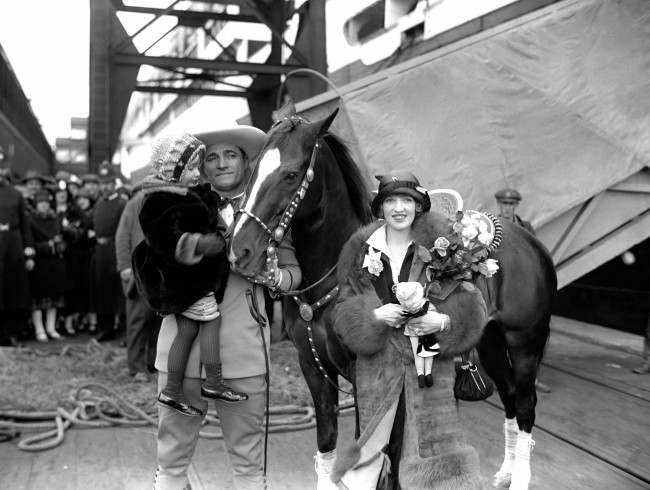 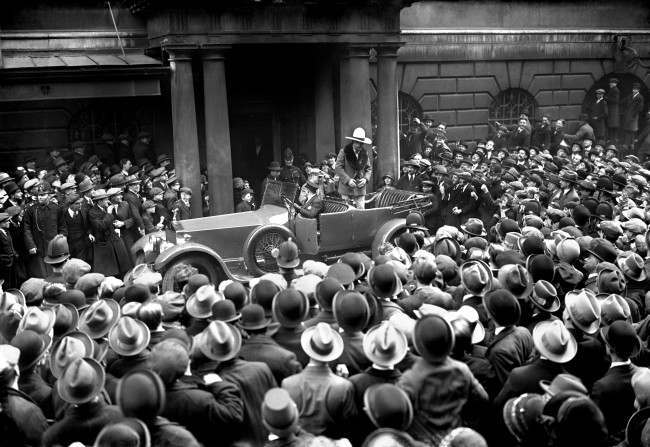 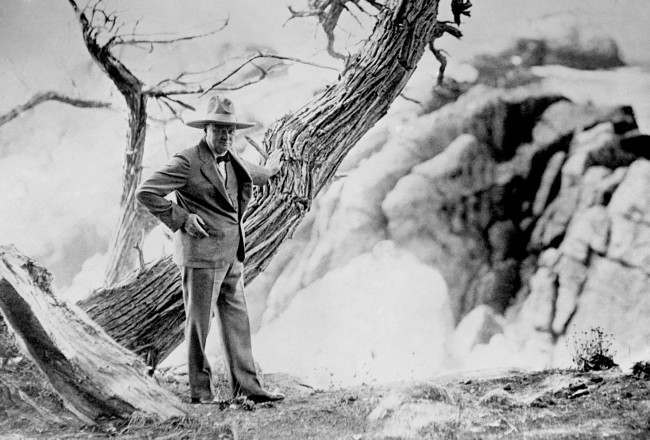 Winston Churchill wearing a Tom Mix hat (named after the popular American western star) near Del Monte, California, during his visit to the Monterey Peninsular. 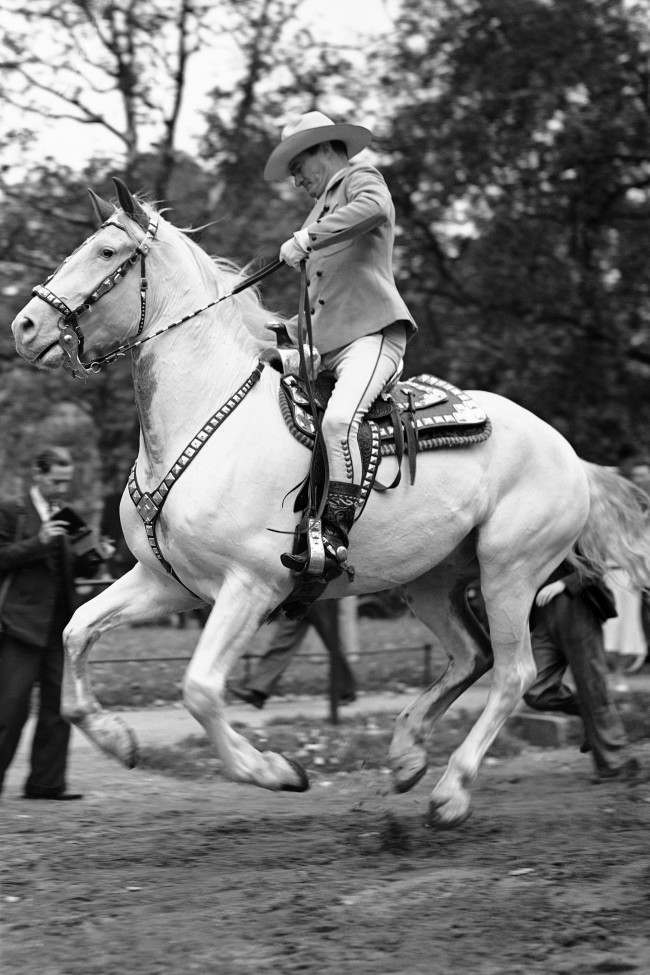 To the delight of promenaders and some hundreds of small boys, Tom Mix, hero of many a thrilling western film, brought his famous white horse, Tony II, into Rotten Row for a ride. A fine action picture of American film star Tom Mix on Tony II in Rotten Row in London, on Sept. 4, 1938. (AP Photo)

On October 12 1940, Tom Mix died. He lost control of his  Cord Phaeton convertible. It trolled into the dry wash (now called the Tom Mix Wash) near Florence, Arizona. 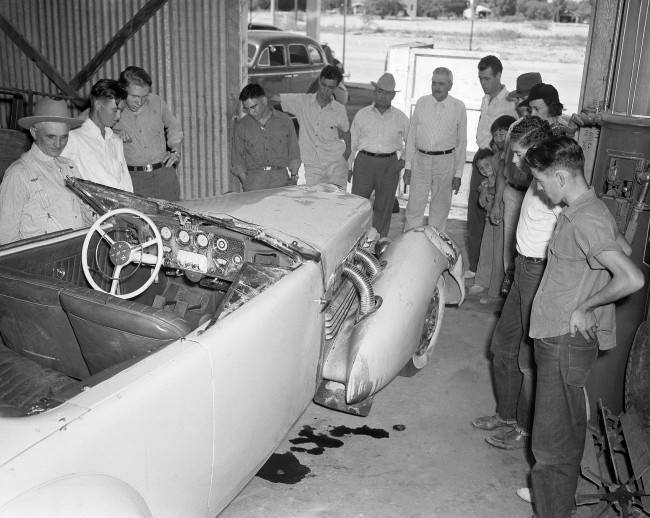 This is the expensive Cord auto in which famous screen star Tom Mix met death when it overturned on desert highway, 18 miles South of Florence, Arizona. Car is pictured in Florence garage Oct. 14, 1940, to which it was towed after the accident. (AP Photo) 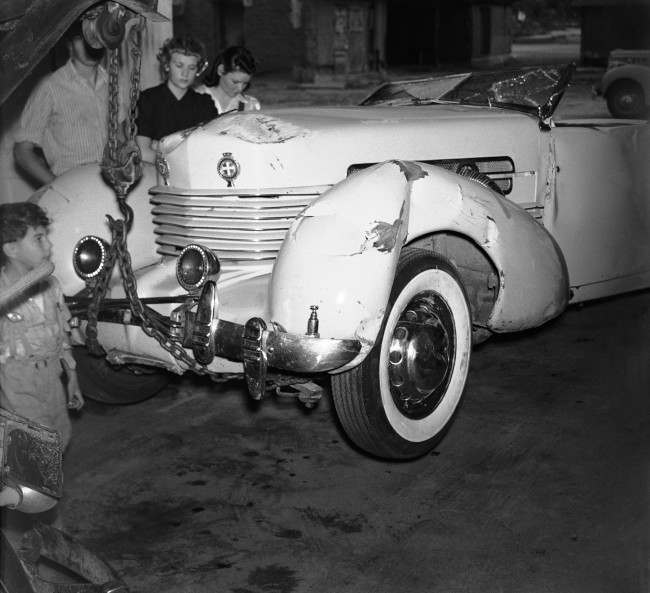 The big racing-type automobile in which Tom Mix cowboy actor, was killed in a highway accident near a Arizona on October 12 is picture after it was to intended in Florence garage on Oct. 16, 1940. Mix was pinned under the over turned partially wrecked car. An eye-witness said Mix was at high speed when his car hit a dirt before rolling over. (AP Photo/Harold Filan)

The car’s been restored: 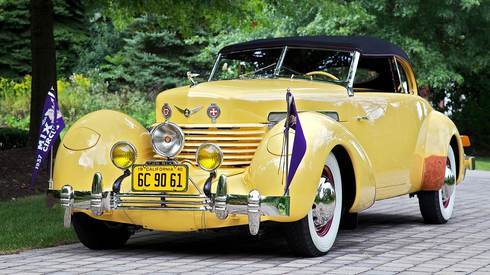 Tom Mix, king of the silent-film cowboys, has been dead for 74 years, but his tricked-up car with a revolver holstered under the dash keeps his legend alive.

Retired Scottsdale businessman Bob White completed an exhaustive restoration in 2011 of Mix’s 1937 Cord 812 Phaeton, a canary-yellow classic that the aging cowboy drove wildly into a wash and to his death near Florence in 1940. 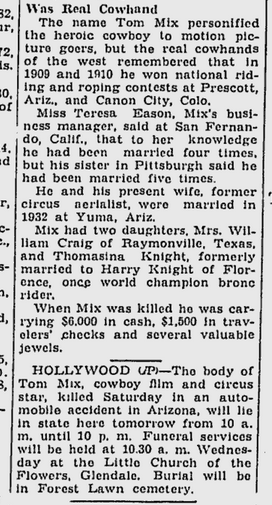 They came to see: 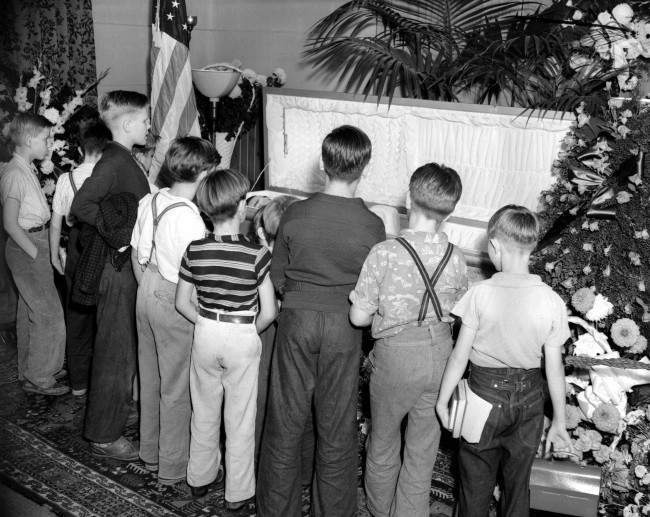 School children file by the casket of their hero and idol, screen cowboy Tom Mix, as his body lays in a public viewing in Los Angeles, Calif., on October 15, 1940. The movie star was killed in a highway accident in the Arizona Desert. (AP Photo) 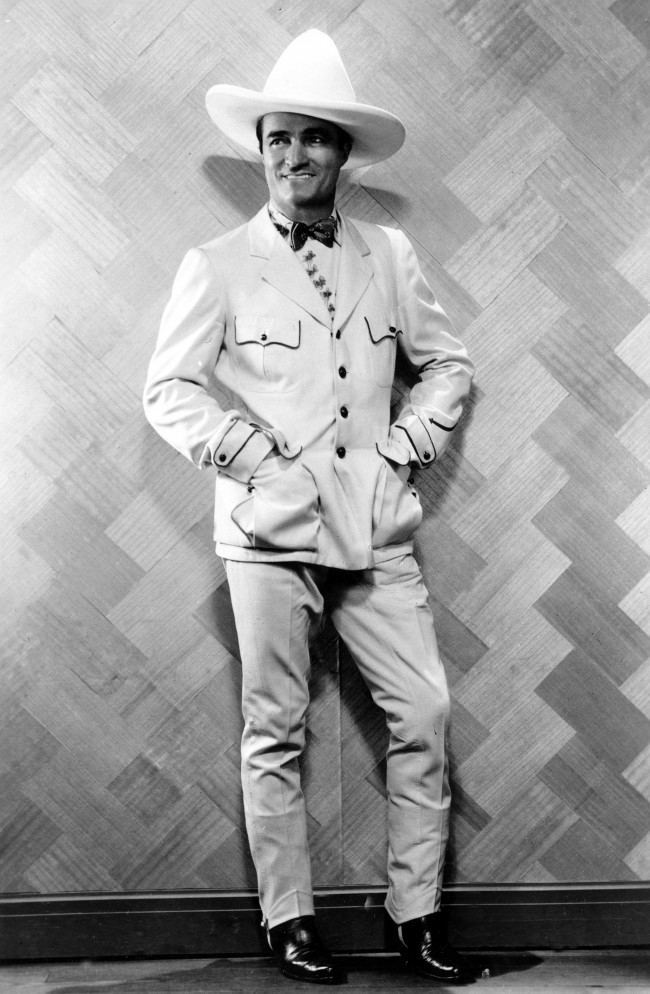 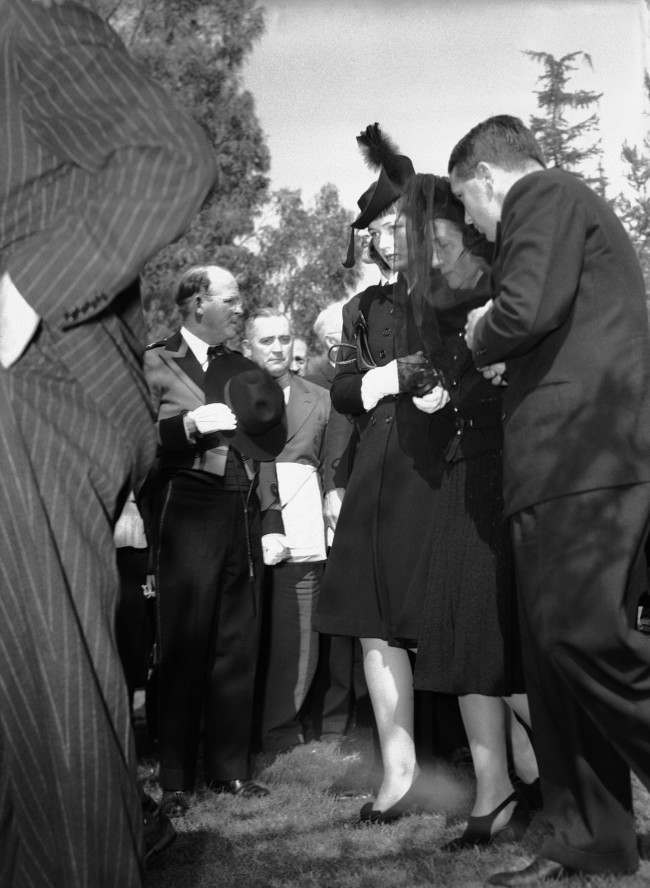 The grieving widow, Mabel Ward Mix, center, and daughter, Thomasina Mix Matthews, of Tom Mix, beloved cowboy actor of the movies and circus who was killed in an automobile accident in Arizona, are shown as they arrived for funeral services at Forest Lawn in Glendale, California on Oct. 16, 1940. With them is Thomasina’s husband, Bernard Matthews. (AP Photo/Harold Filan) 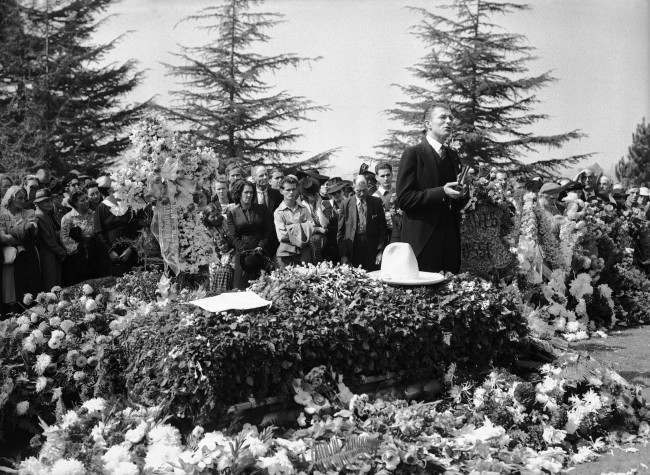 More than 2000 persons gathered at Forest Lawn in Glendale, California Oct. 16, 1940, as Tom Mix, famous cowboy movie actor killed in a desert highway accident in Arizona, was buried following funeral services in the Little Church of the Flowers. The Rev. J. Whitcomb Brougher, officiates here beside the casket, on which rests Mix’s ten-gall on hat (AP Photo/Harold Filan)

They erected a monument to Mix. You can drive by Tony the Riderless Horse. 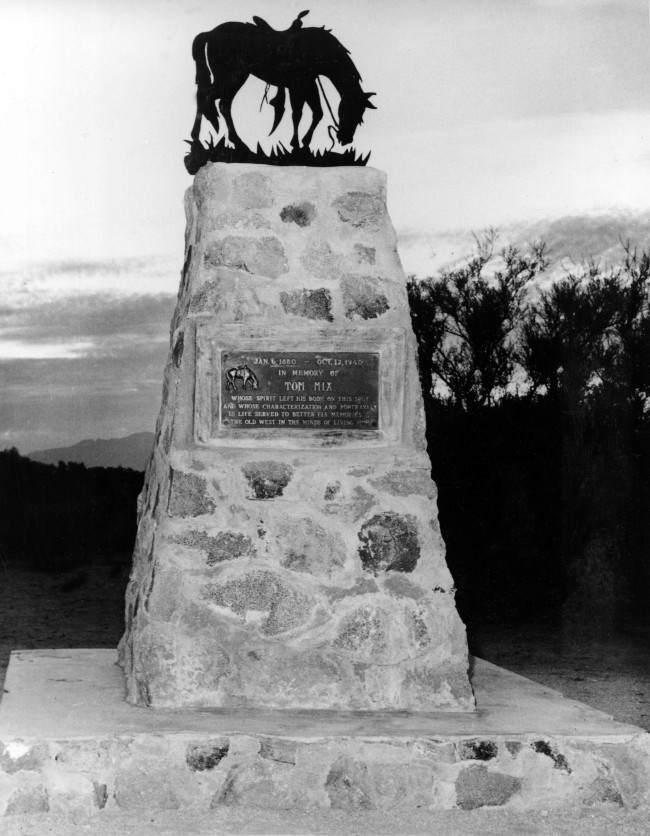 A monument marks the site of the fatal car accident that killed Western movie star Tom Mix, seen here on November 26, 1949. The bronze statue of a horse with an empty saddle, symbolizing Mix’s horse Tony, is located along highway 80-89, between Florence and Tucson, Arizona. (AP Photo)

“In memory of Tom Mix whose spirit left his body on this spot and whose characterization and portrayals in life served to better fix memories of the Old West in the minds of living men.”

His fame endured. In 1967, Mix was featured with many other 20th century celebrities on the cover of The Beatles’ Sergeant Pepper’s Lonely Hearts Club Band.

Can you find him? Clue: look for the big hat. 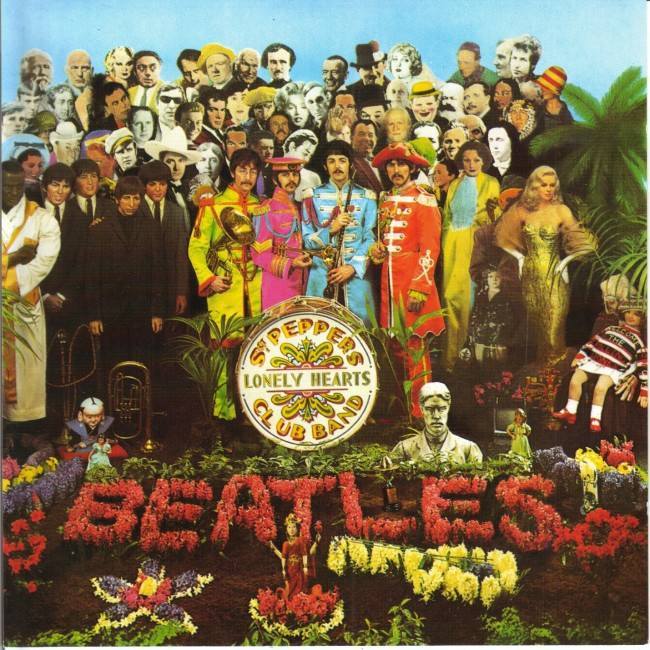