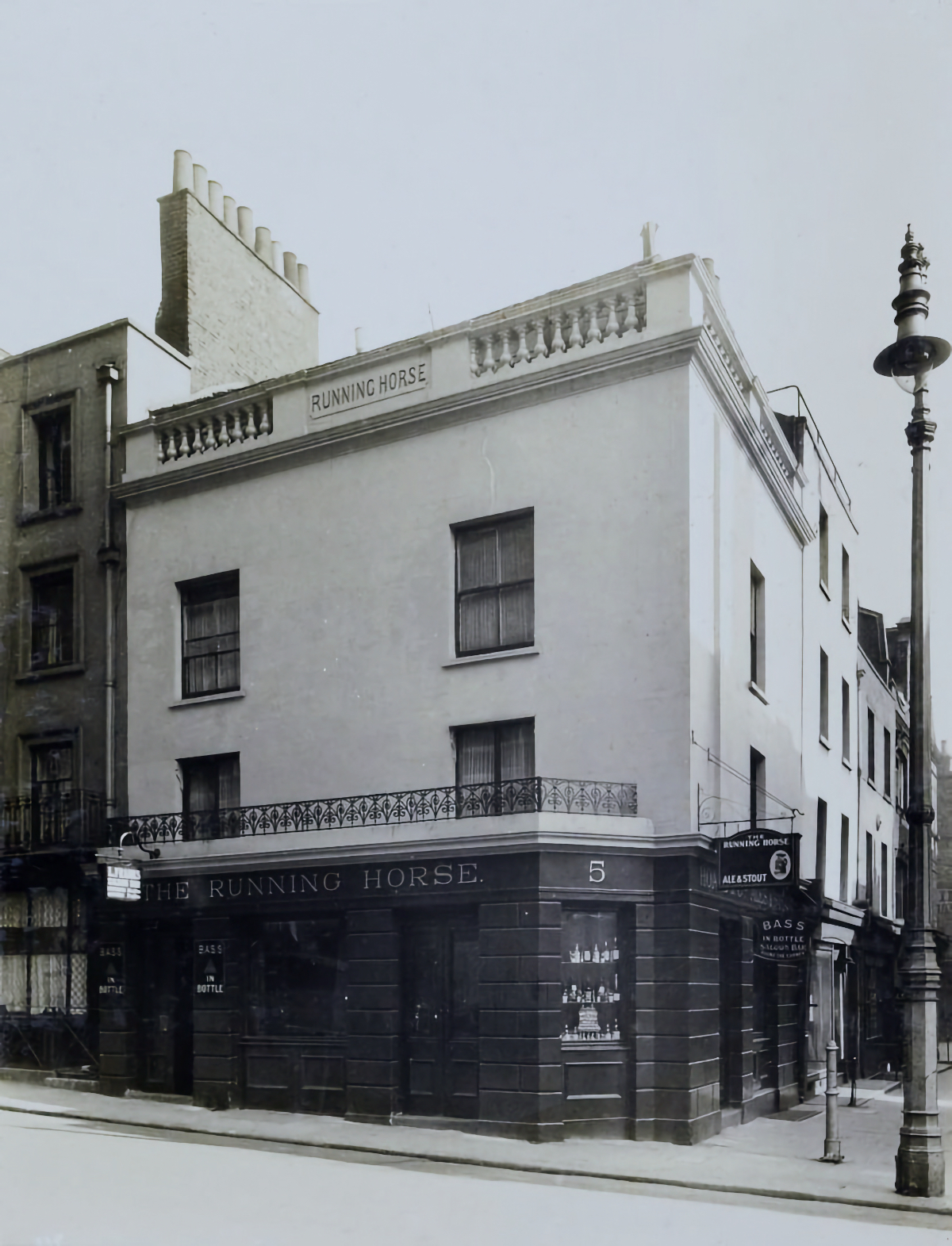 Running Horse, Mayfair 5 East Chapel Street, Mayfair, W1 This photo was taken by the Charrington Brewery during an architectural survey of their pubs c. 1930

Trebeck Street, according to Gillian Bebbington’s ’London Street Names’ is named after Reverend Trebeck (the ex Vicar of Croydon), who was the first rector of St George’s on Hanover Square in 1725. This was a time when, if you were so inclined and you had a gun, it was possible to shoot woodcock in the Conduit Mead a few hundred yards from St George Street, and snipe at the western end of Brook Street. Trebeck Street, however, has only been around since the end of 1937, when it changed its name from East Chapel Street which was built around 1740. This road led to Shepherd Market which was on the site of Brook Field named after the River Tyburn which flowed through it. It was here that the May Fair was first held in 1688 and which gave the district its name. Geraldine Edith Mitton, in her book Mayfair, Belgravia, and Bayswater – The Fascination of London wrote in 1903:

Mayfair is at the present time the most fashionable part of London, so much so that the name has come to be a synonym for wealth or pride of birth. Yet it was not always so … in James II.’s reign a permission was given for a fair to be held on the north side of Piccadilly, to begin on the first day of May, and to last for fifteen days. This fair, we are told, was “not for trade and merchandise, but for musick, showes, drinking, gaming, raffling, lotteries, stageplays and drolls.” It was immensely popular, and was frequented by “all the nobility of the town.

Shepherd’s Market was built by Edward Shepherd between 1735 and around 1746. The lower story of which held butcher’s shops and the upper contained a theatre. At the beginning of the 20th Geraldine Mitton wrote that it consisted mostly of small provision shops. Some forty years later Charles Graves writing for the Daily Mail in May 1938 visited Trebeck Street which had only recently changed its name:

I went down the cobbled alley which is the beginning of Shepherd Street. The old fashioned pink building known as Carrington Court has given place to a smart block of flats. East Chapel Street has been renamed Trebeck Street, but the little old shops like those you see in Guildford or any other conservative county town still remain…In one little shop I noticed “Gent’s Leisure trousers,” and a fishmonger announced fresh boiled gulls’ eggs at 1s. 9d per dozen. 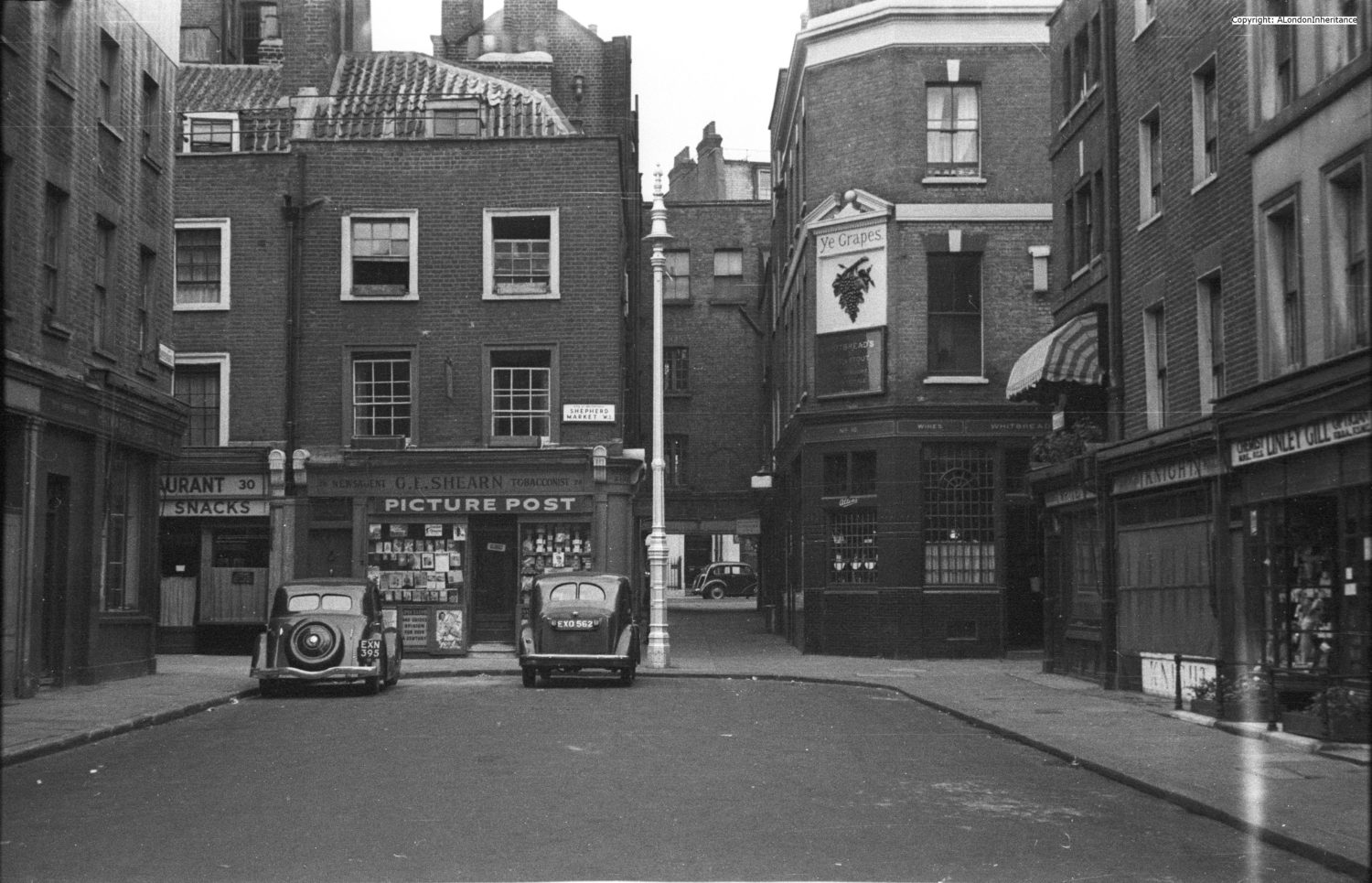 Surprisingly, for someone writing for the Daily Mail, he failed to mention the pub, at number 5 Trebeck Street which had existed from at least 1825. According to the National Archives and other reports there was a court case in 1936 involving lesbianism, “undesirables” and “effeminately-dressed young men”. In December of that year Louis Lyons Franks, the licensee of the Running Horse was fined £30 at the Bow Street Police Court. Police evidence showed that effeminate youths with dyed and waved hair, powdered faces and painted lips were regulars at the pub. Harry Chittenden, barman at the Running Horse was reported to have said

Men of a perverted type on leaving the nearby clubs tried to enter the Running Horse. There were three entrances to the pub and he had to play hide-and-seek behind a telephone box to “keep even” with them.

The Running Horse had actually been under police observation for about three years with one police report from 1935 stating:

At 10.15pm two youths of the effeminate type entered. Both their faces had been powdered. The waiter immediately engaged them in conversation and after a short while he served them with drinks and at the same time got one for himself. These two youths then commenced to cuddle each other. This was very noticeable and in fact my attention was drawn to it by the two elders ladies who had entered at 10.05pm. These two ladies later informed me that they had only visited the house for the purpose of seeing the “PUFFY BOYS” playing about.

At 9.20pm in the Running Horse, three women entered and sat at the counter. They were of the manly type and consumed ‘bitter beer’. They were very lively. One woman called to a waiter and said to him, “Has my wife been in this evening?” The waiter replied “No, not yet”.

Another policemen on observation in the pub wrote:

When one of these men said to her: – “Call Madam. I have a good one for you’. The woman “A” then stepped forward and she and the barmaid Eileen listened to the man’s story at the end of which they all laughed. The man then tore to me and said: -“That’s damn good. Don’t you think so? I replied:- “I did not hear what was said”. The man then said to me in the presence of the woman “A” and Eileen the following piece of poetry:-

This is undoubtedly based on the popular song ‘Excelsior’. The song was heard by all the persons in the immediate vicinity and much laughter was caused. 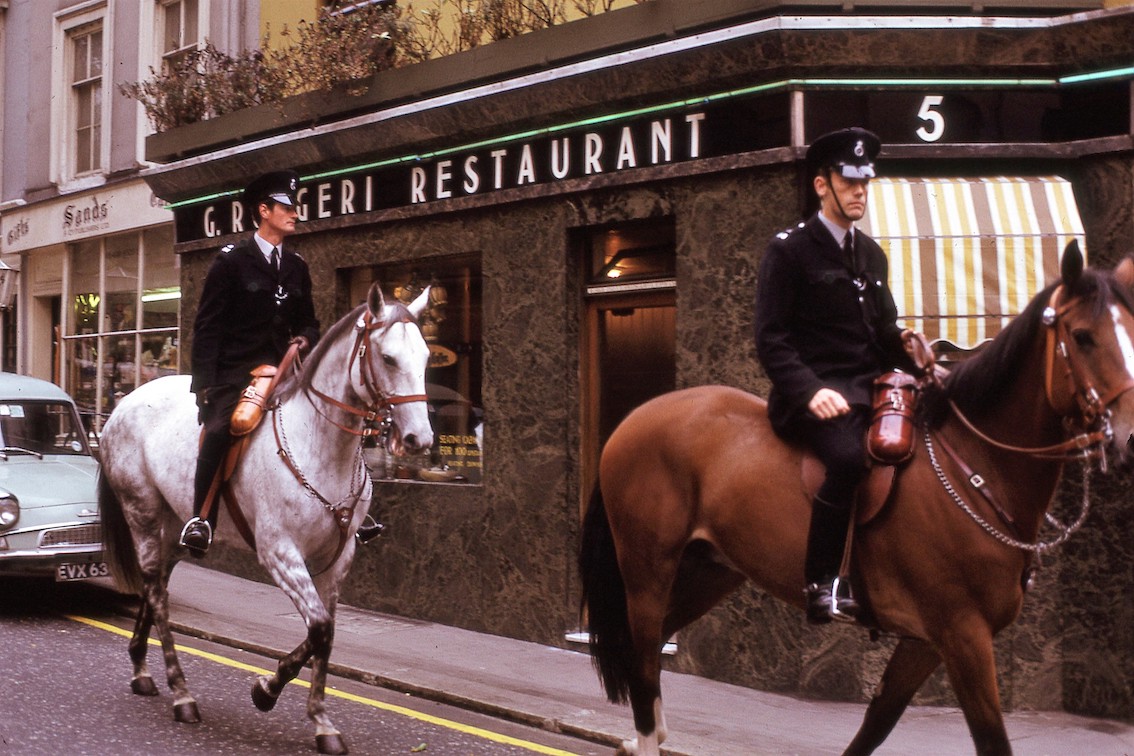 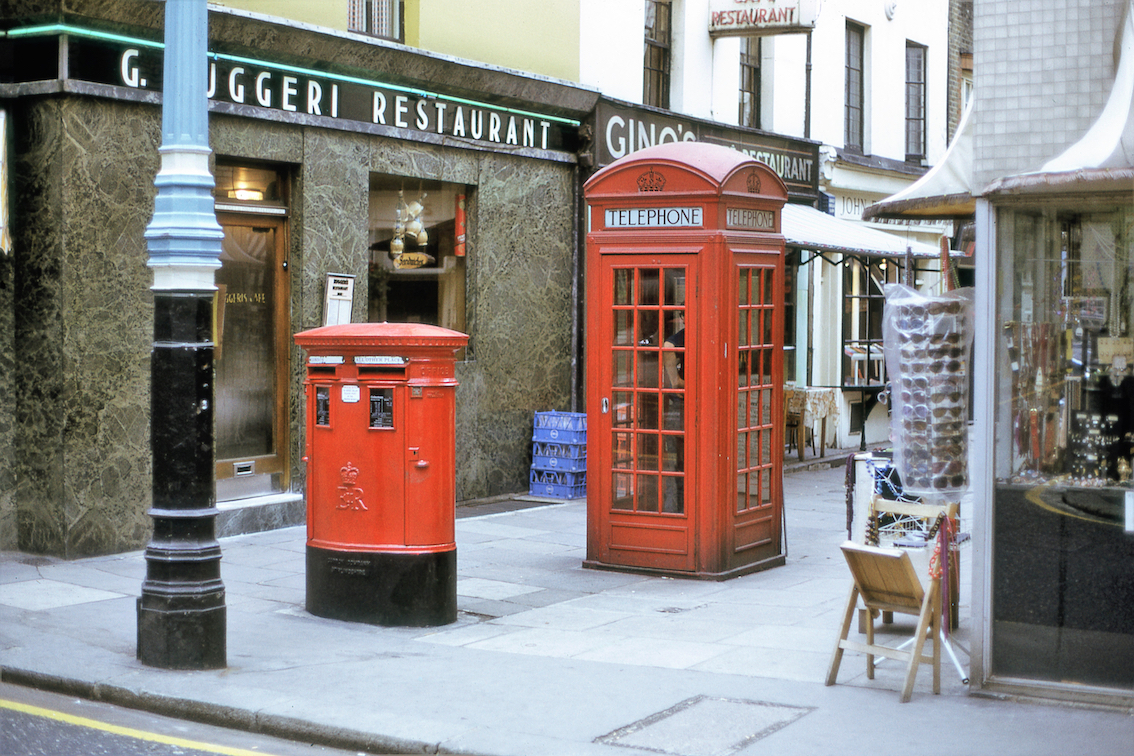 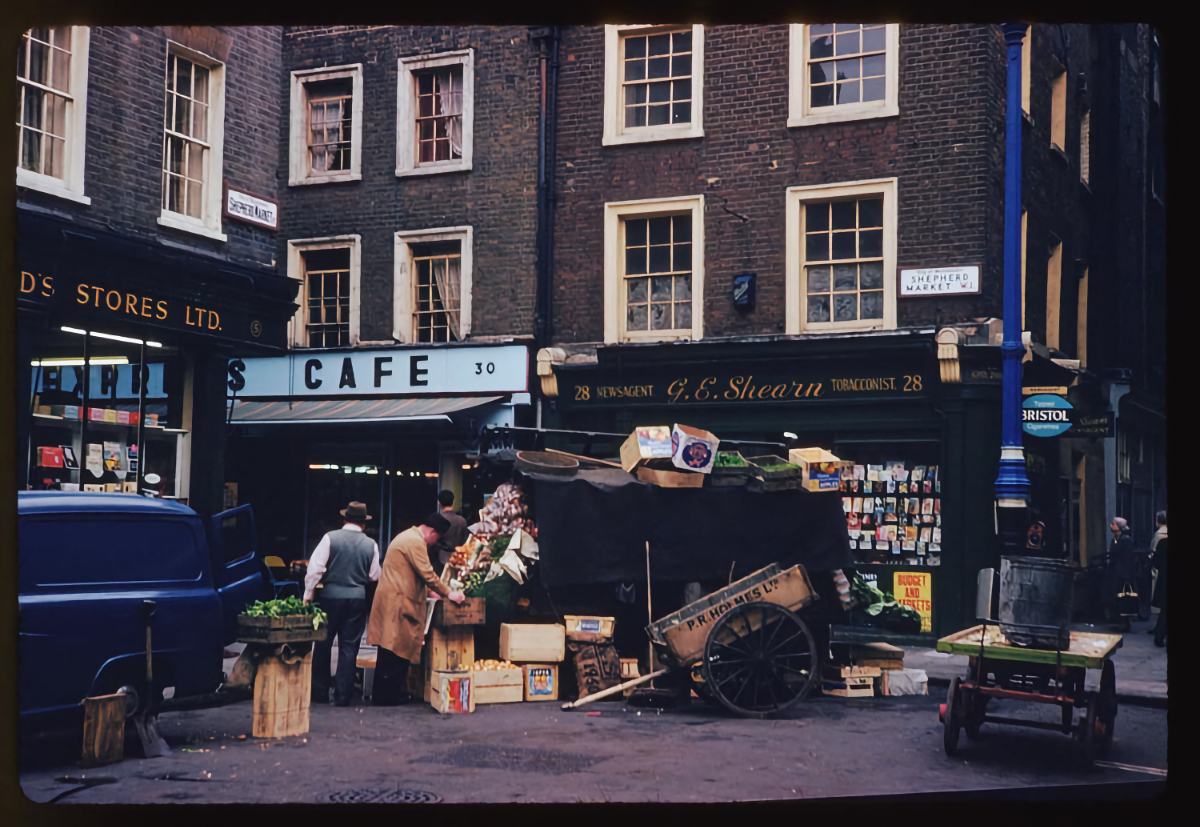 Shepherd Market in 1961 by CW Cushman

The police had never prosecuted a specific landlord prefering to indict the actual individuals caught in the act. But the Canadian Military and Admiralty complained about the pub and the police were compelled to caution the landlord under the Metropolitan Police Act (MPA): willfully and knowingly permitting disorderly conduct. When the landlord failed to comply with the ban on drunkenness and serving on cited importuners, he was prosecuted, convicted, fined and the pub was shut down in the spring 1937. The Running Horse had been a pub on the premises for over a 100 years and lost its appeal. When the property reopened, not long before the Second World War, the name was changed to G. Ruggeri restaurant run by Giovanni Ruggeri. Despite his presumingly Italian heritage the restaurant stayed open throughout the war and was still trading until the early 1970s when it became part of the Le Bistingo Bistro chain. In 1993 it became Boudin Blanc. From 2023 it will become a Noble Rot restaurant.