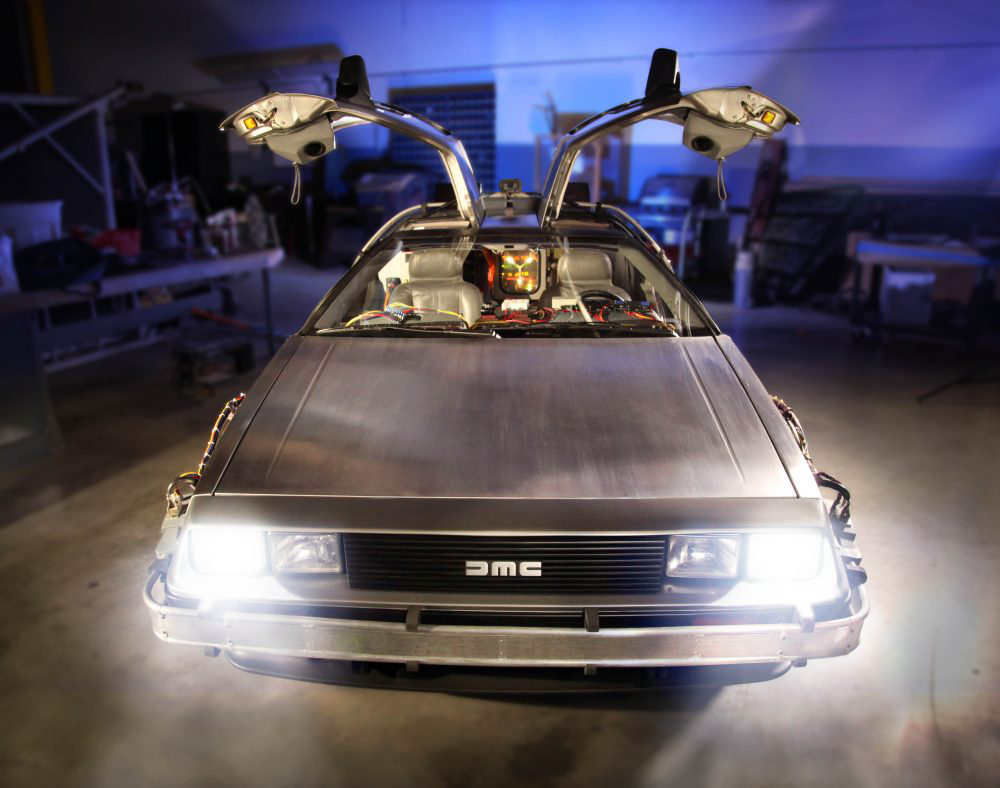 You may have heard: the iconic DeLorean DMC-12 is coming back, thanks to Stephen Wynne, CEO of the revamped DeLorean Motor Company. Wynne emigrated to Southern California from Liverpool in 1980, and in the early part of the decade he “became the go-to DeLorean mechanic country-wide,” writes Tom Bartlett at The Hustle, after the mechanically challenged stainless-steel cars started showing up at his shop. When the DeLorean went bankrupt two years after the Giorgetto Giugiaro-designed sports car’s 1981 debut, Wynne bought the name, intellectual property, and “a warehouse filled with leftover DeLorean parts.”

The story of DeLorean is, in some ways, the story of the excess and enthusiasm of the 80s. Fired from GM, auto exec John DeLorean (“a rock star among suits”) started his own company with the aim of building a sports car like no other. He began production in Northern Ireland, with grants from the British government, in 1980. Financing soon dried up after cost overruns raised prices and the cars’ many notorious issues—such as those gull-wing doors failing to open—became apparent. DeLorean made a $24 million cocaine deal with what turned out to be an undercover FBI agent to keep the company afloat. Though he was acquitted of the charges, the company lay in ruins. 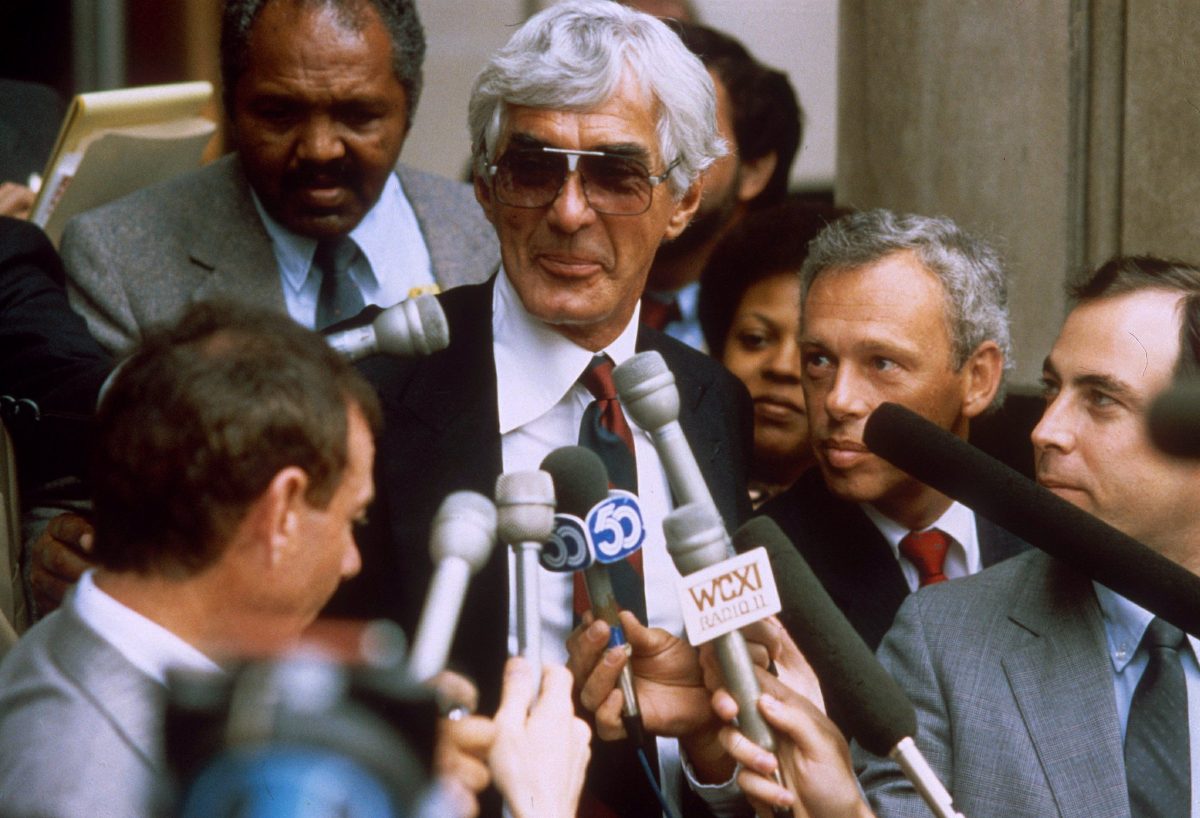 John DeLorean at a US courthouse in Detroit, Michigan, in 1985 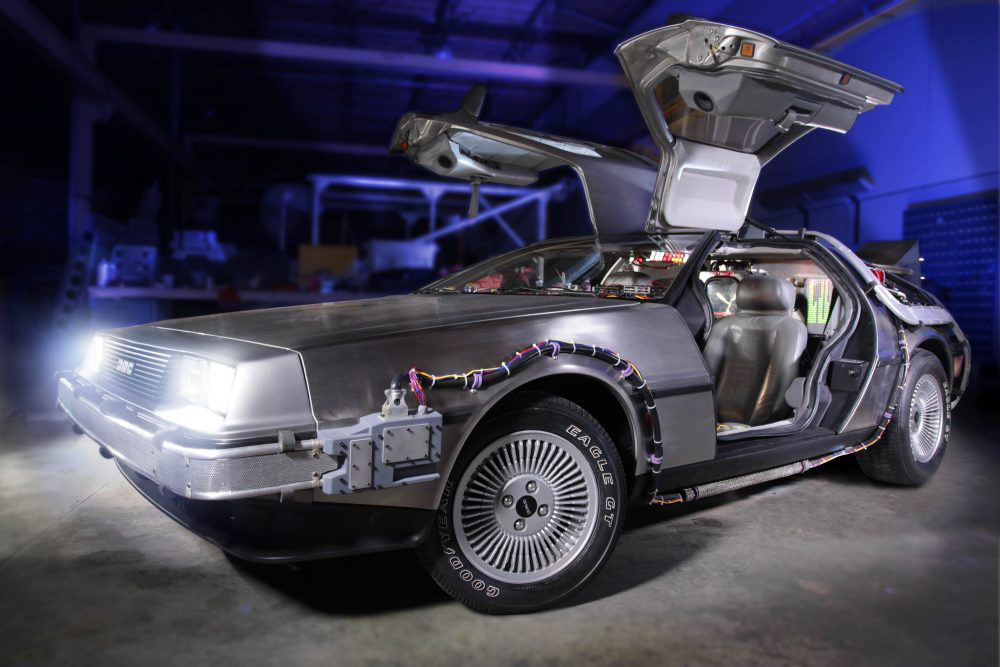 “The first decade” of taking over the DeLorean Motor Company, says Wynne, “was dealing with the shame of a bankruptcy and drug dealing. The second decade was dealing with people thinking that it was a movie prop, that it was just a time machine.” He refers, of course, to the resurrection of the DeLorean as a pop culture icon in Robert Zemeckis’ 1985 instant classic Back to the Future, when the car “underwent a Wilson Hover Conversion,” as the Petersen Museum notes, “propelled through time and space by a combination of gasoline, plutonium, lightning, garbage and 19th century steam locomotive.”

Invented by Emmet “Doc” Brown, who travelled through time with Marty McFly by means of a “flux capacitor,” the movie’s flying car became inseparable from the DeLorean image. By 1985, however, the DeLorean already had a reputation as a modern-day Edsel, as Petrolicious points out. “The DeLorean was a joke in Back to the Future, so dated it made for a perfect time machine.” While “audiences probably can’t imagine the movie without the DeLorean, it almost didn’t happen.” In the script, producer Bob Gale remembers, “’the time machine was originally built out of a refrigerator that Doc Brown hauled around in the back of his pickup truck.’” 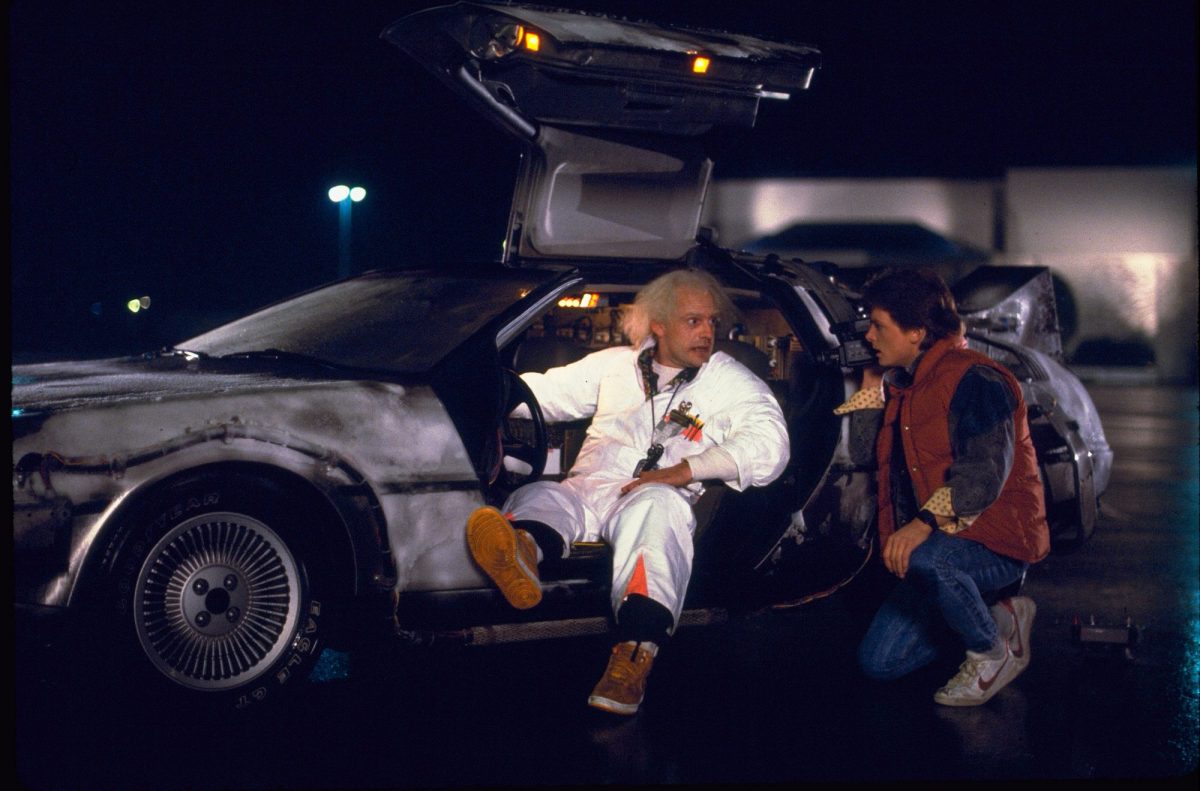 In 2016, the Petersen Museum unveiled the restored “Hero A,” you see here, one of three cars used during filming of the movie, and the one Christopher Lloyd and Michael J. Fox actually sat in while shooting scenes (cars “B” and “C” were mostly used for stunt work). The restoration team took almost two years to bring the car to “better than new condition,” with several upgrades and “actual working hardware wherever possible,” as the “flashing lights, digital readouts, and beeping sounds” were added in post-production in the film.

As for the new DeLorean DMC-12, arriving soon in a low-volume production run, it too will receive substantial upgrades. “I’m fiercely proud of DeLorean,” Wynne tells Popular Mechanics, “but the car they put out could have been better. We’ve had 30-plus years of [research and development] and 9,000 prototypes that were made, all so I can make 300 really nice cars a year.” They won’t actually travel through time, but the sleek, shiny silver wedges will forever be a potent symbol of mid-80s retro-futurist tech. 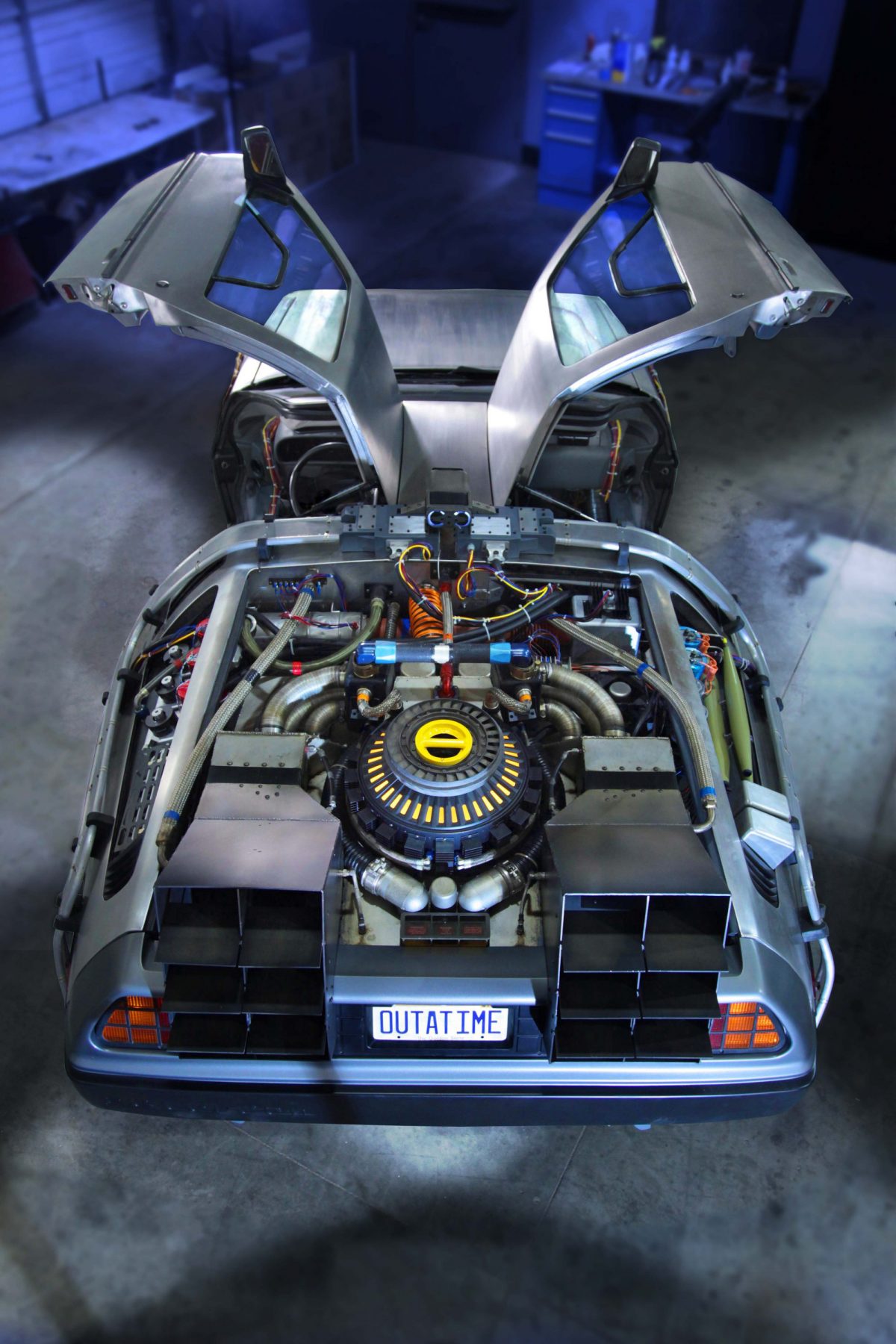 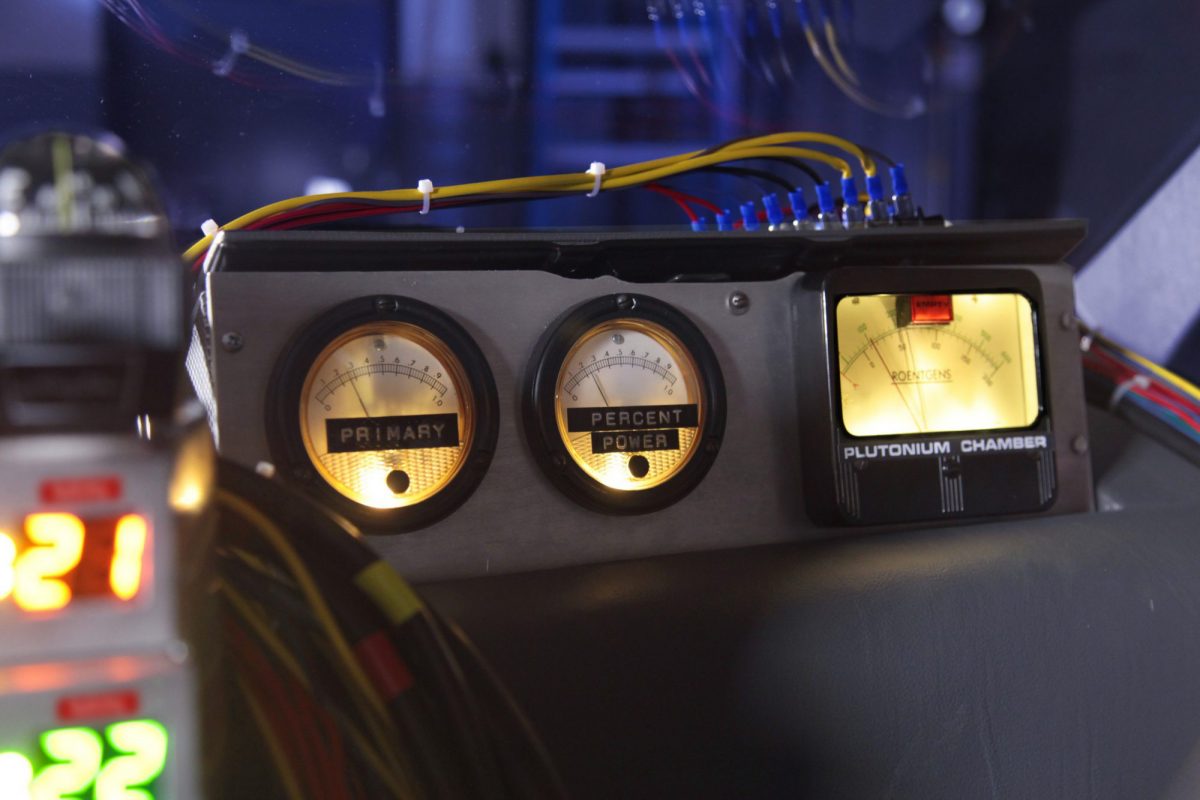