Charles-Édouard Jeanneret, aka Le Corbusier, was the most potent architect of the 20th century. The artist, polemicist and urban planner pioneered modernity, made radical urban utopias for the masses – and spent his last years nearly nude in a cabin inspired by human physiology. 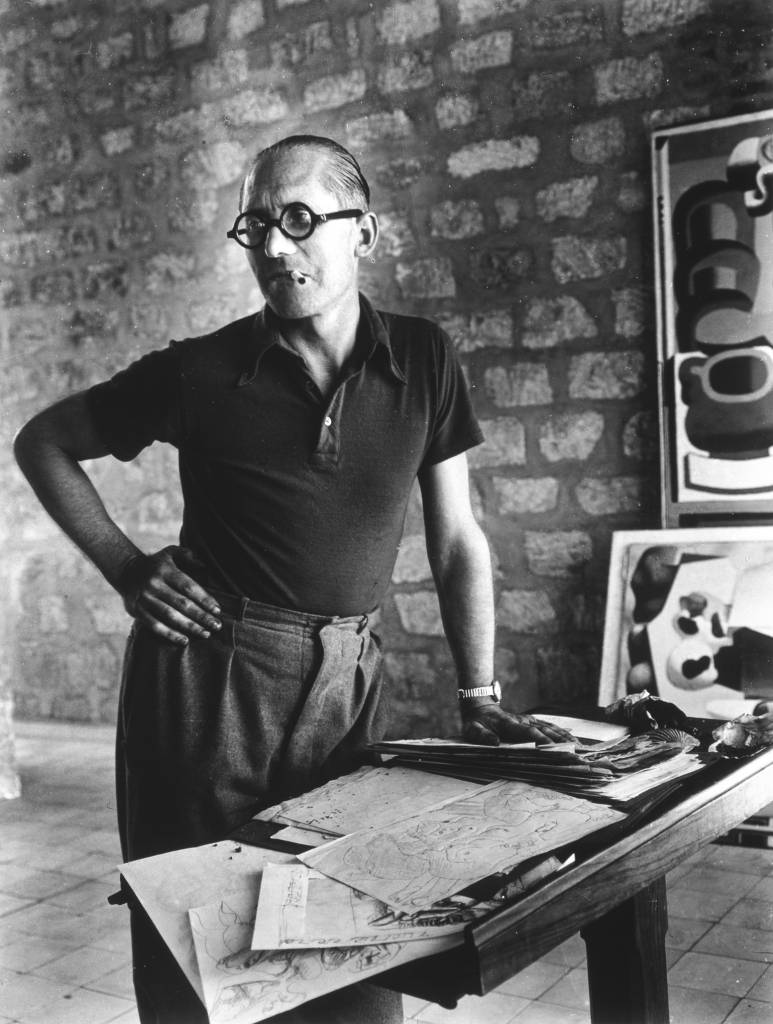 Charles-Édouard Jeanneret, AKA Le Corbusier, California, 1937. Although Le Corbusier only designed one building in the US – the Carpenter Center at Harvard University – his ideas were a powerful influence on the architecture of southern California.

Le Corbusier based his Modulor system on the proportions of the human figure and through it sought to create buildings which were designed to meet the needs of their inhabitants. Human scale was to dictate every aspect of architecture from the width of city streets to the height of a kitchen surface…

Architectural innovation aside, what is it that makes Le Corbusier, the person so recognisable? His penchant for a tailored black suit – the ideal standardised clothing item? The bow tie and dress shoe? Or the dark-rimed rounded spectacles? Ever conscious of the image he was portraying, Le Corbusier made himself the first global architectural brand. 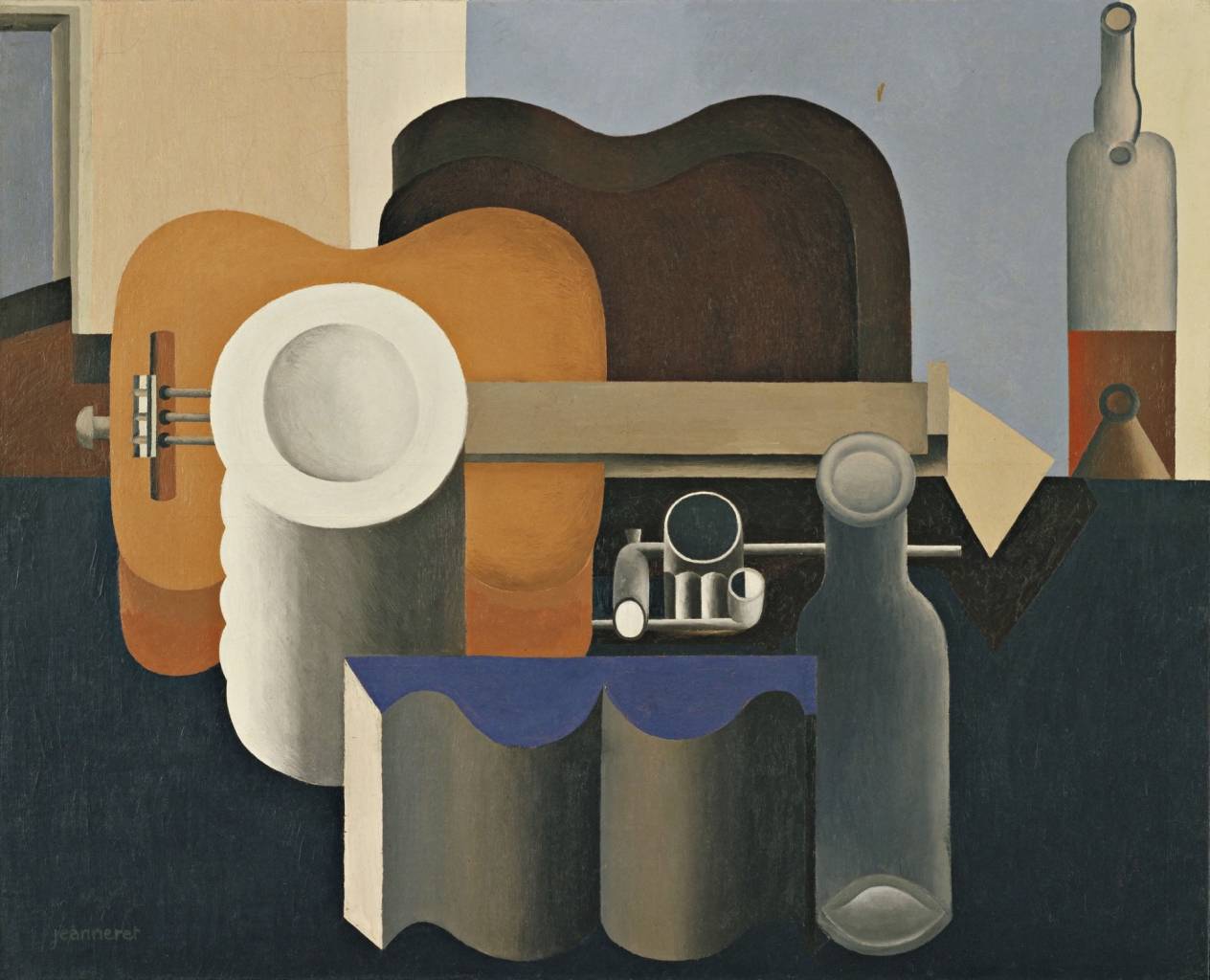 1907, Le Corbusier obtained work as a draughtsman in the office of Joseph Hoffman, a leading modernist architect of the time, which was followed by 15 months working as an apprentice to Auguste Perret (himself a Royal Gold Medallist).

In 1916, Le Corbusier settled in Paris with the intention of practising architecture there. As well as designing, Le Corbusier published and edited L’Esprit Nouveau, an avant-garde magazine about the arts. It was during this time that C E Jenneret adopted the name Le Corbusier.

Le Corbusier founded a practice with his cousin, Pierre Jenneret in 1924 which became known as a post-graduate training school for architecture students of all nationalities. The practice of Le Corbusier and P. Jenneret existed until 1940 when the fall of France put an end to its activities. 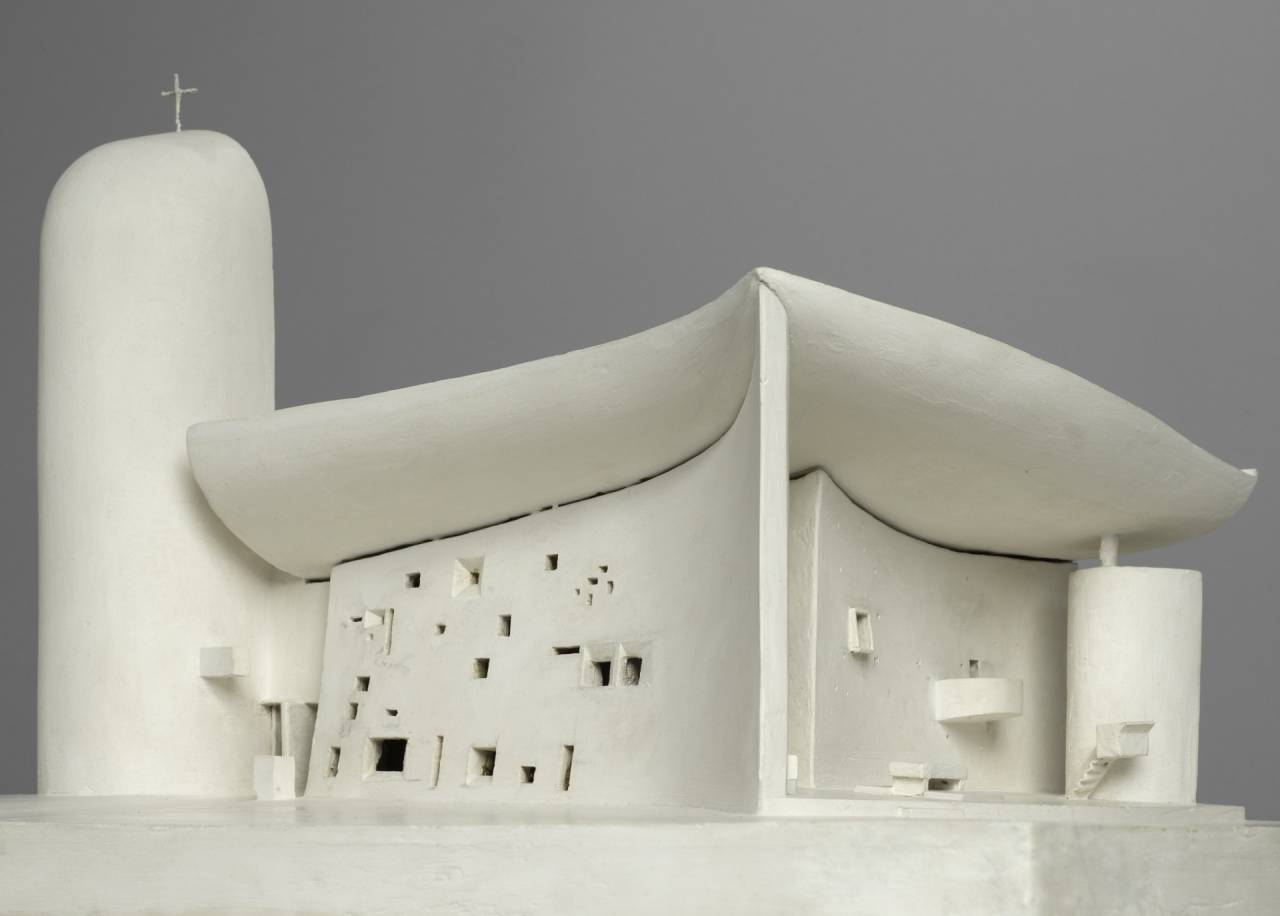 A model of Le Corbusier’s Chapelle Notre-Dame-du-Haut, Ronchamp, eastern France, built 1950-55, one of the most important examples of 20th-century religious architecture, with its ‘billowing’ concrete roof that appears to float.

Stories about Courbosier are many. This one is from Taya Zinkin. She met Courbosier in Bombay, India, 1952. Le Corbusier had been commissioned by Jawaharlal Nehru, India’s first prime minister, to build a city that would replace Lahore, the capital of the Punjab lost to newly created Pakistan after partition in 1947. Le Corbusier and his team designed everything about Chandigarh.

As we were getting off the plane he asked me what I was doing that evening: “Catching a train, I am afraid,” I said. “ Pity. You are fat and I like my women fat. We could have spent a pleasant night together.” He said this quite casually. He was not being offensive, he was being factual, so involved in his own ego that it did not occur to him that it might have been better put and more gallant to spend some time on preliminaries. So gigantic was Corb’s egotism that he probably considered it enough of an honour for a humble mortal to provide a genius like him with a night’s relaxation.

When I told him how much I had liked the drawings and compositions of bulls he had given Jane Drew, he beamed. “People do not know it because they are hypnotised by categories, but I am a much greater artist than Picasso; a much better draftsman.” By the time he had had a few drinks he was paying me the sort of compliments Rubens must have paid Hélène Fourment when she was far gone with child. Had I not studied medicine I would have found his anatomical precision embarrassing. I had always known that I was fat, but I had not realised before that I looked as fat as all that. Taking advantage of his enthusiasm for my curves I asked if I could come and see him in his office the next day to ask questions about Chandigarh. He squeezed my hand, gave me a time, and warned: “ Don’t be late. I hate waiting.” 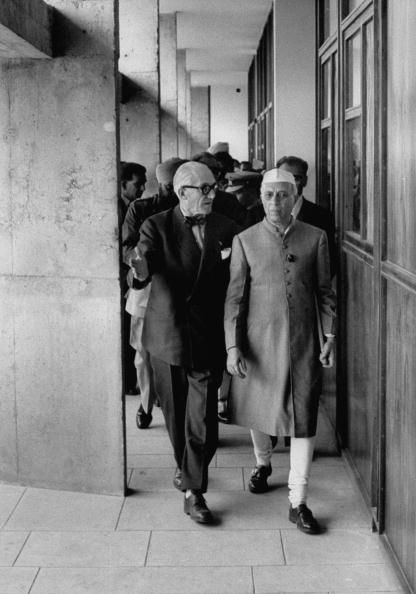 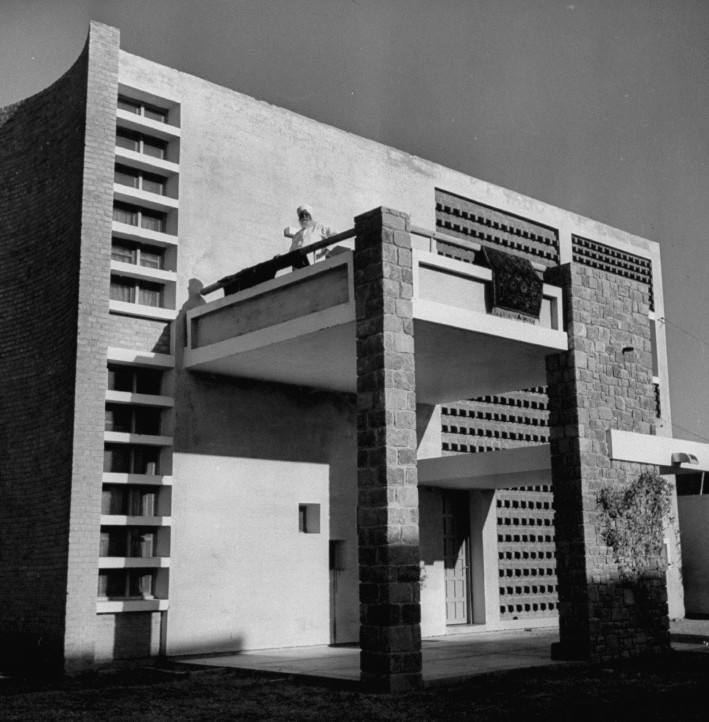 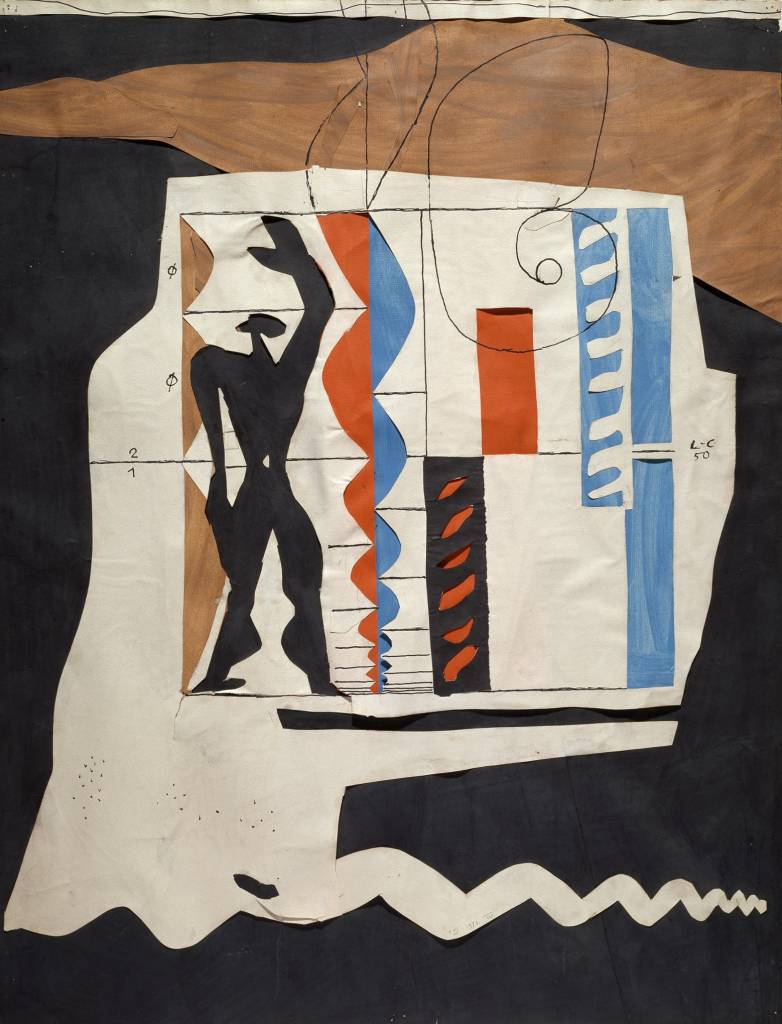 One of Le Corbusier’s drawings from the Modulor series, 1950, in which he uses the golden rule and mathematical progressions to define the principle of harmonious proportions in architecture.

In 1949, in a letter he wrote to his friend Jean-Jacques Duval for which he built the factory of Saint Die, he writes:

We can kick the bucket at any time of life. I was talking with my brother, came to spend a few days here. I made ​​arrangements agreed with my wife, to bequeath to the poor that I own.

Now that I possess can make paper burn, or better. I have here, 24 rue Nungesser et Coli (and even 35 Sèvres in a cellar) significant and multifaceted archives: drawings, writings, notes, travel diaries, albums, etc. It should not come as any villain can loot without firing a shot and cancel the series that are worth because they are grouped.
In short, we’ll have a little studying my archives to develop the useful (for . sell or to give to people, institutions, museums)

Conclusion: This letter is to put you chip in his ear and ask you – when the hour strikes – to take immediate possession, c ‘ is to say control of my archives to the shelter of an incorrect dispersion.

And that this letter with my signature you used formal piece for all purposes.

With my love and gratitude. 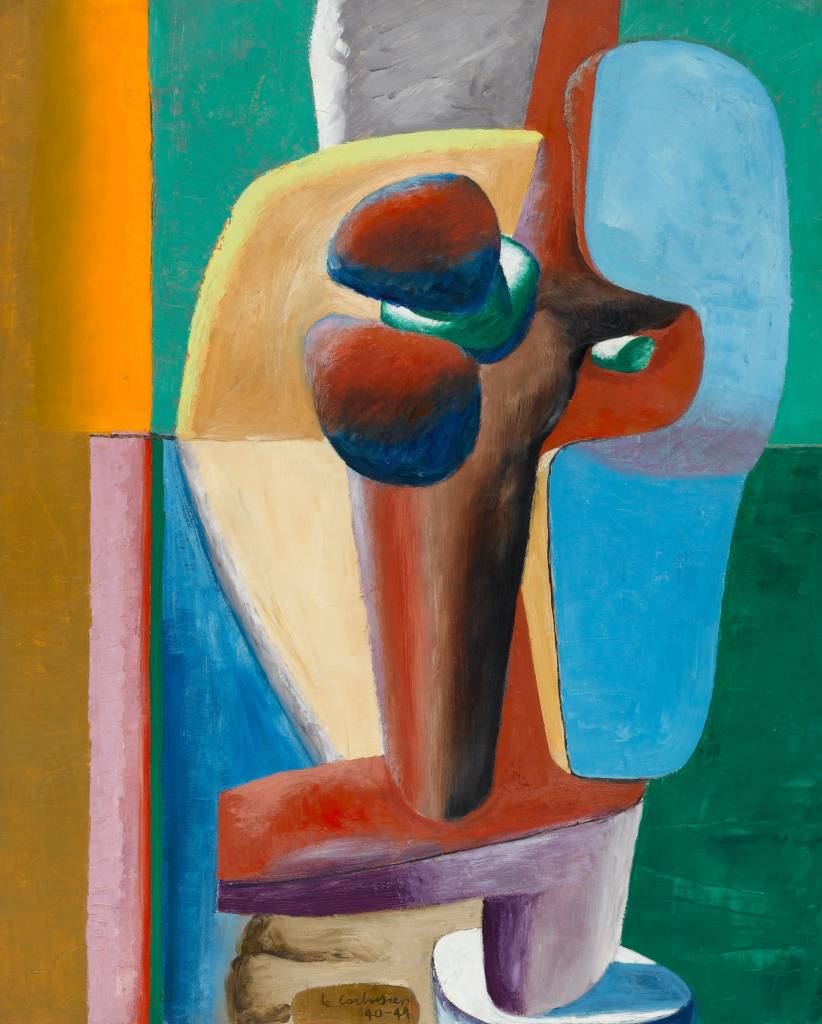 A painting from Le Corbusier’s acoustic period, in which he links the concept of acoustics to space and how we sense it. Ubu IV, 1940-1944. 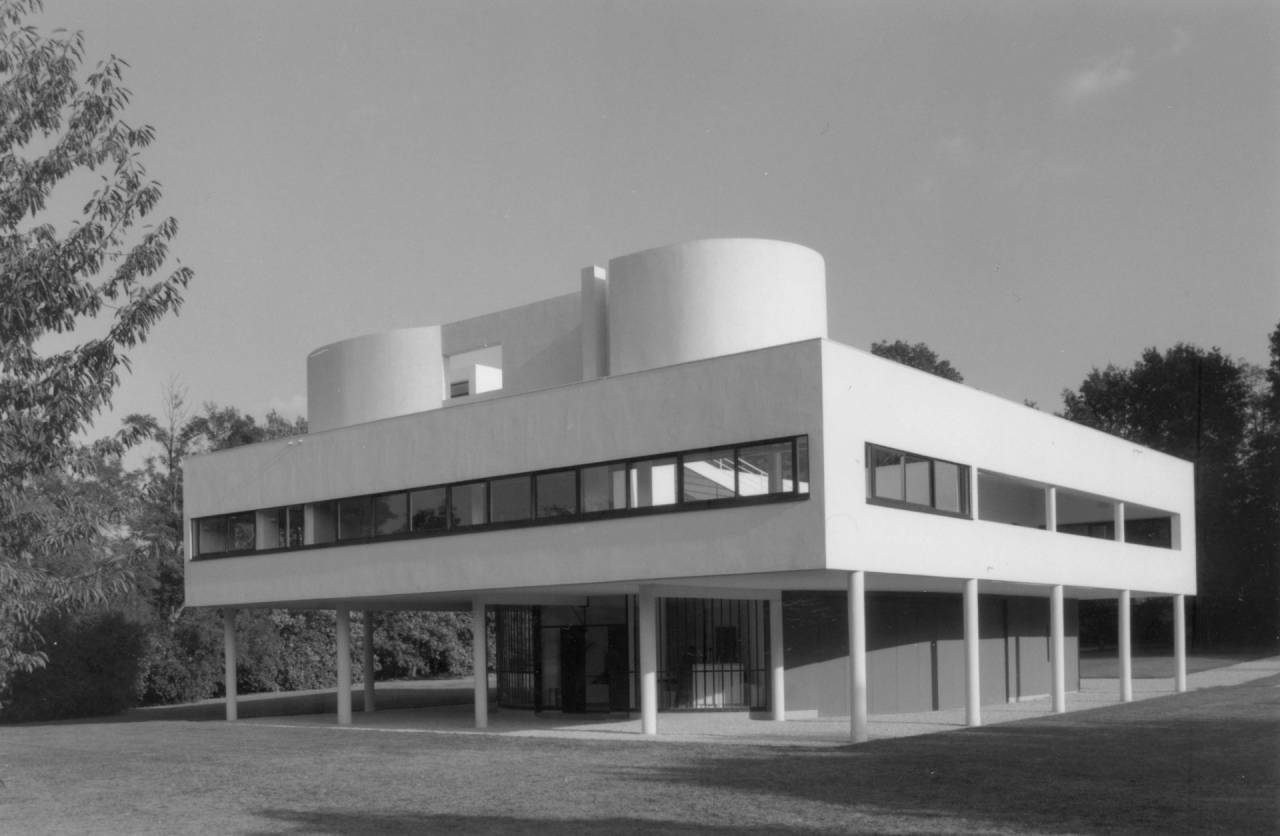 The private dwelling as manifesto. Villa Savoye, designed by Le Corbusier and his cousin Pierre Jeanneret, and built 1928-1931 on the outskirts of Paris, defined a new living space – one shared with machines and automobiles. 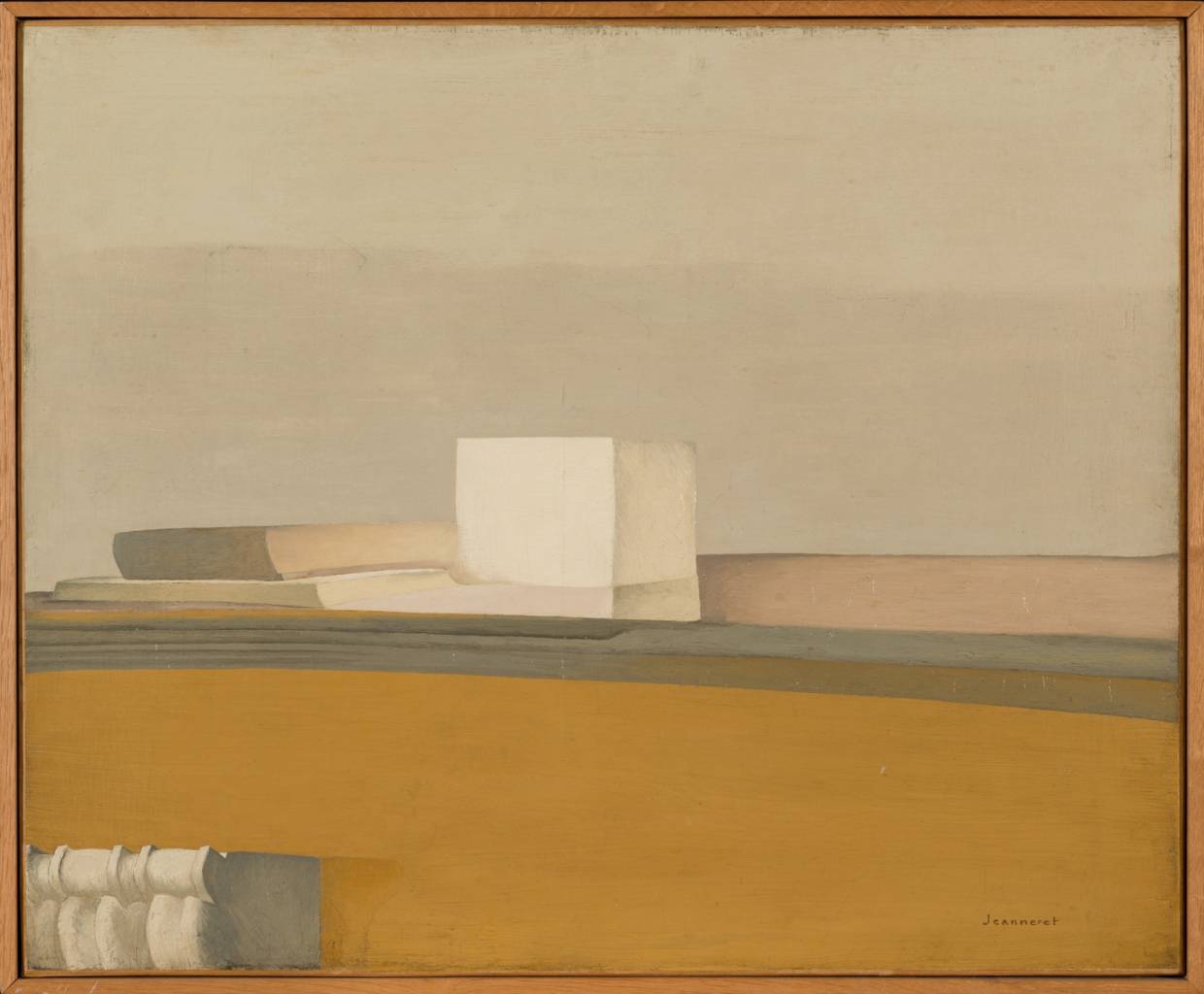 La Cheminée, 1918, the cornerstone painting from which developed his ideas on purist architecture. 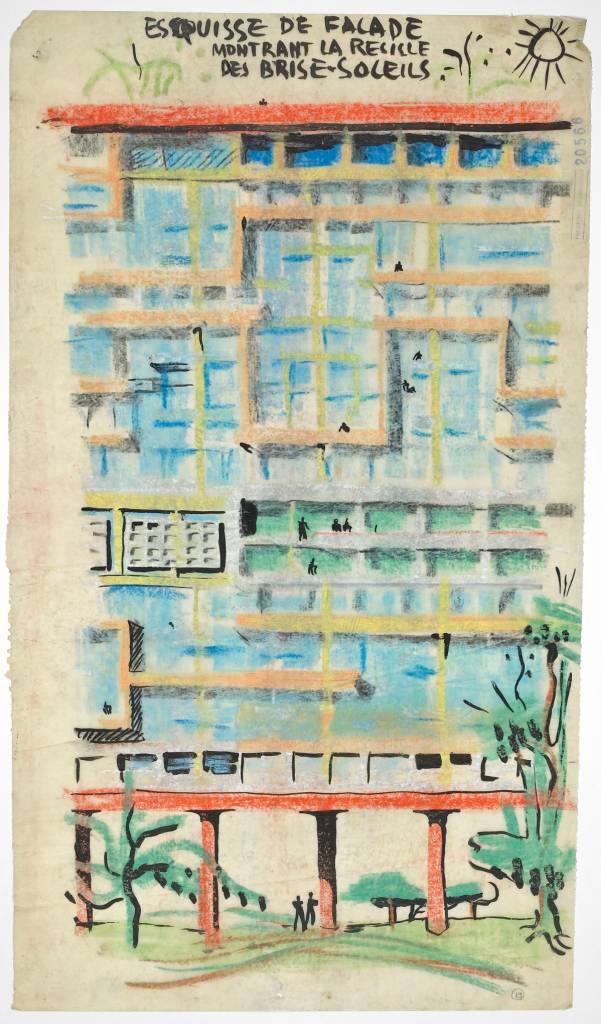 Le Corbusier’s theories of the housing unit led to his tower blocks, the unités d’habitation. A sketch of the facade of one of his ‘machines for living in’, 1944 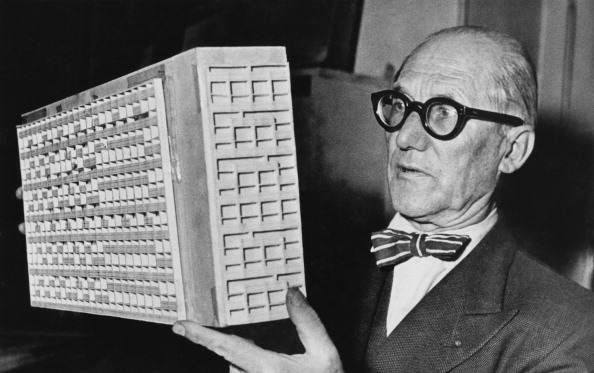 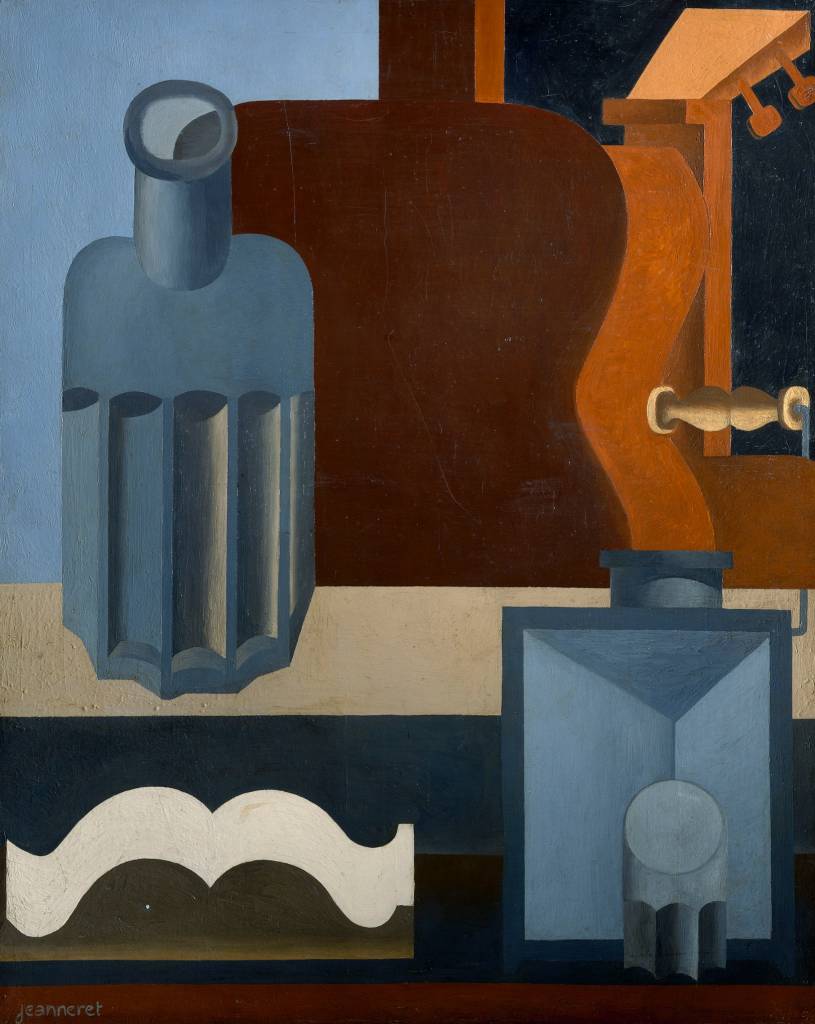 Purism was an art movement founded in 1918 by Le Corbusier and Amédée Ozenfant, and explained in their manifesto After Cubism. It is characterised by orthogonal compositions, the use of neutral colours and the representation of industrial objects. Le Corbusier’s Guitare Verticale (1ère version), 1920. 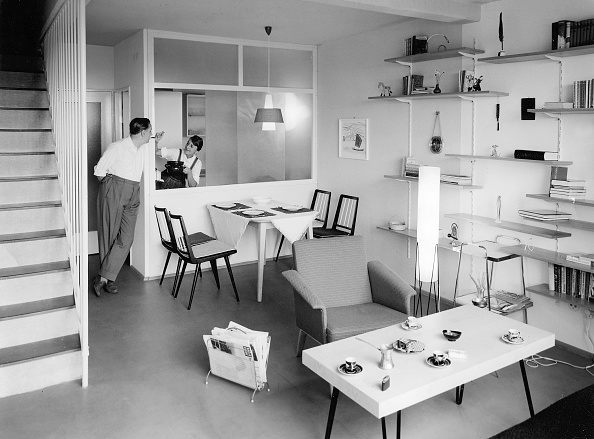 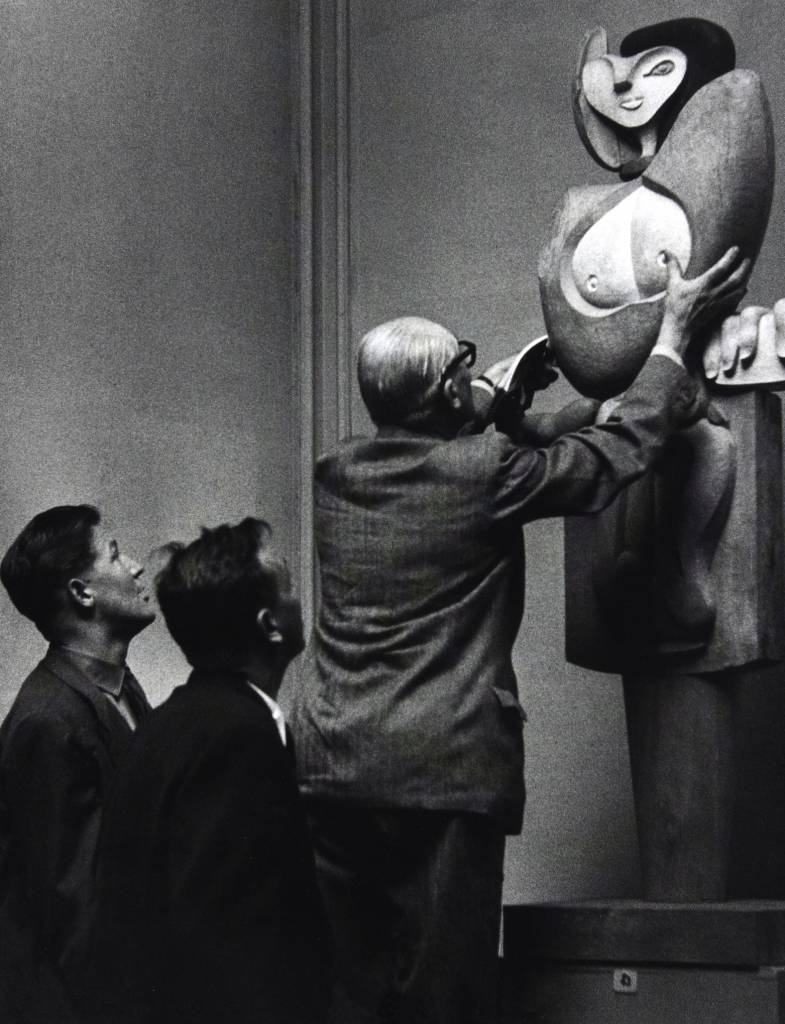 Corbusier adjusting his sculpture Femme, 1953, a collaboration with French artist Joseph Savina, some of whose works were influenced by Le Corbusier’s paintings and drawings. 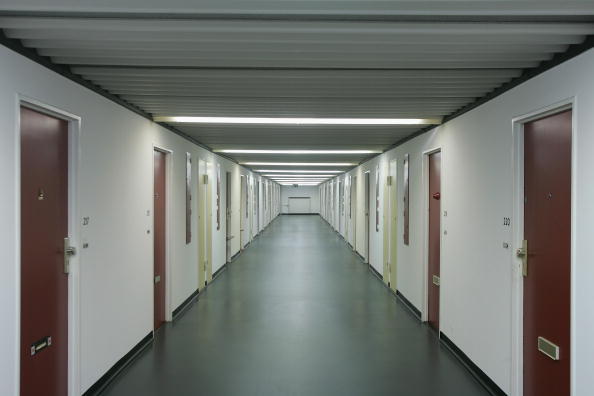 BERLIN – JULY 27: View in the corridor of the Corbusier House taken on July 27, 2007 in Berlin, Germany. French-Swiss architect Le Corbusier designed the “Unite d’Habitation – Typ Berlin” with 527 apartments on 17tn floors. The building was exhibited during the building exhibition Interbau57 in 1957. Unite d’Habitation – Typ Berlin will celebrate its 50 year old anniversary in 2008. It is one of the six houses in Europe which are designed by Le Corbusier. (Photo by Andreas Rentz/Getty Images) 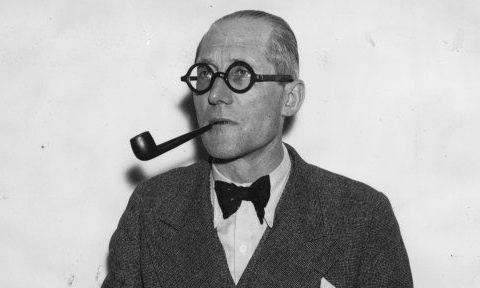 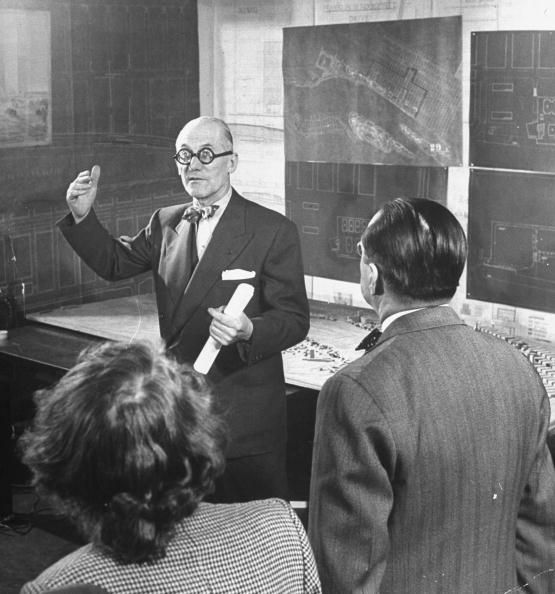 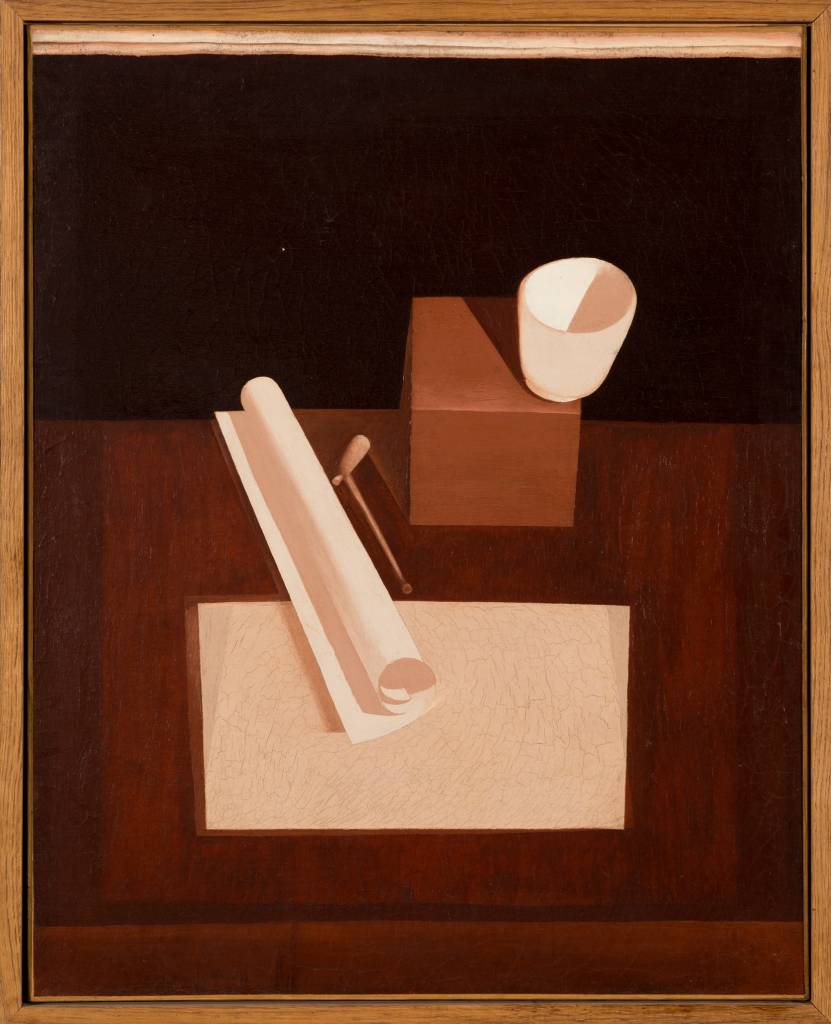 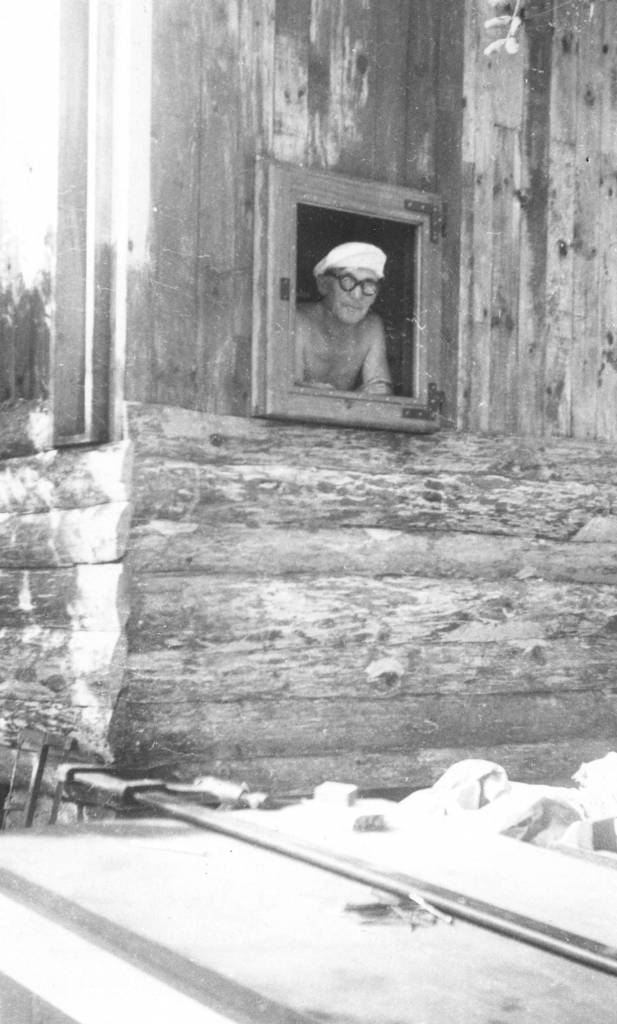 Le Corbusier in Le Cabanon (little cabin), a minimalist living space that distilled his ideas of a housing unit, based purely on the physiology of the body. It was built in 1951 in the south of France, and he lived there almost naked. In 1965, during one of his daily swims
in the sea just below the cabin, he drowned.